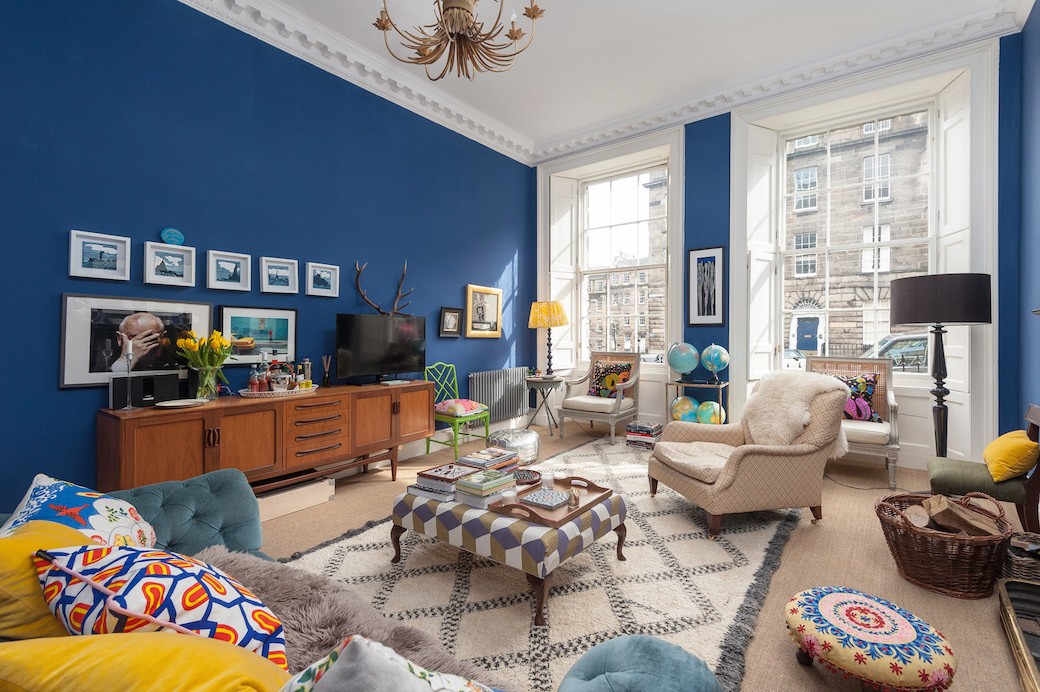 Many years ago, too many years to acknowledge here, I moved into a rental flatshare in Nelson Street in Edinburgh’s Georgian New Town. It was a great flat – beautiful in its proportions and period detail, albeit with a tired interior, but at that stage in life I didn’t mind having a dated kitchen with tiling that looked like it might have been there since the ’70s. The big rooms and brilliant location won me over, and this street has been a favourite New Town address of mine ever since.

So when I noticed this main door ground floor flat in Nelson Street being marketed by Knight Frank, needless to say I had to explore it further. “Magnolia, magnolia and more magnolia” is how owners Andrew and Anna Martin describe this three bedroom property when they bought it in May 2014. “The previous owners had re-decorated to sell,” Andrew explains. “It had been a HMO (multiple occupancy let) in recent years, but we loved the neoclassical proportions and the size of the flat, which was obvious as soon as we entered for the first time.” 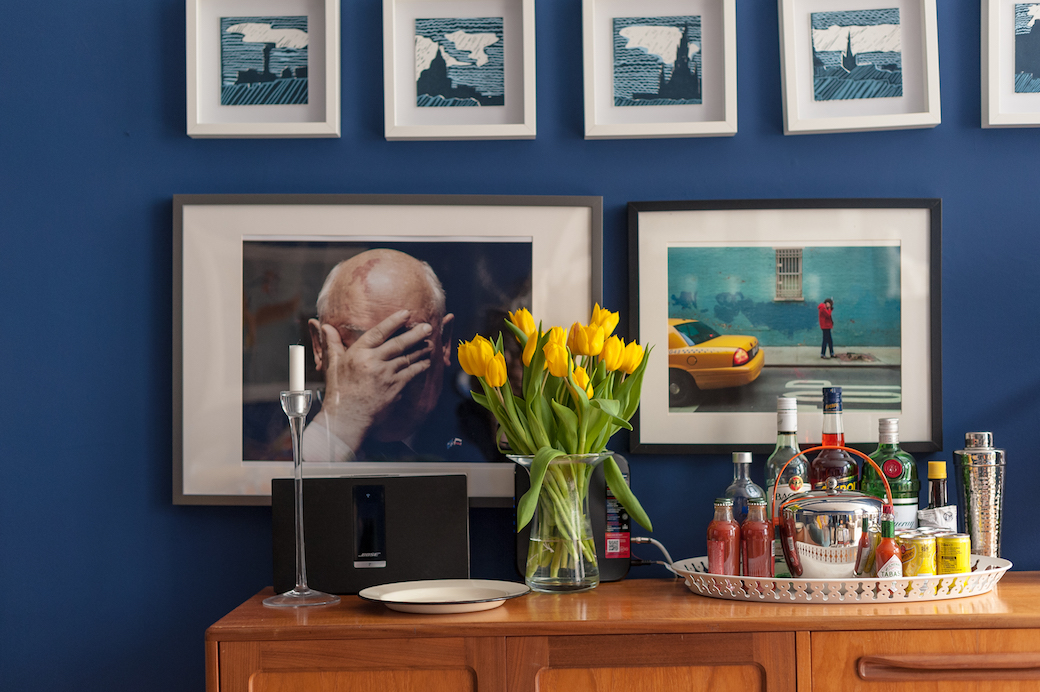 With a drawing room, sitting room, a large dining-kitchen and three double bedrooms, this is a substantial property, and the couple knew that taking on this flat would also require substantial investment, both financially to achieve the style and finish they wanted, and in their time and effort. Two years on and Andrew and Anna have created a striking home that reflects their love of design. I asked the couple about the refurbishment process, and about the inspiration between their design decisions. 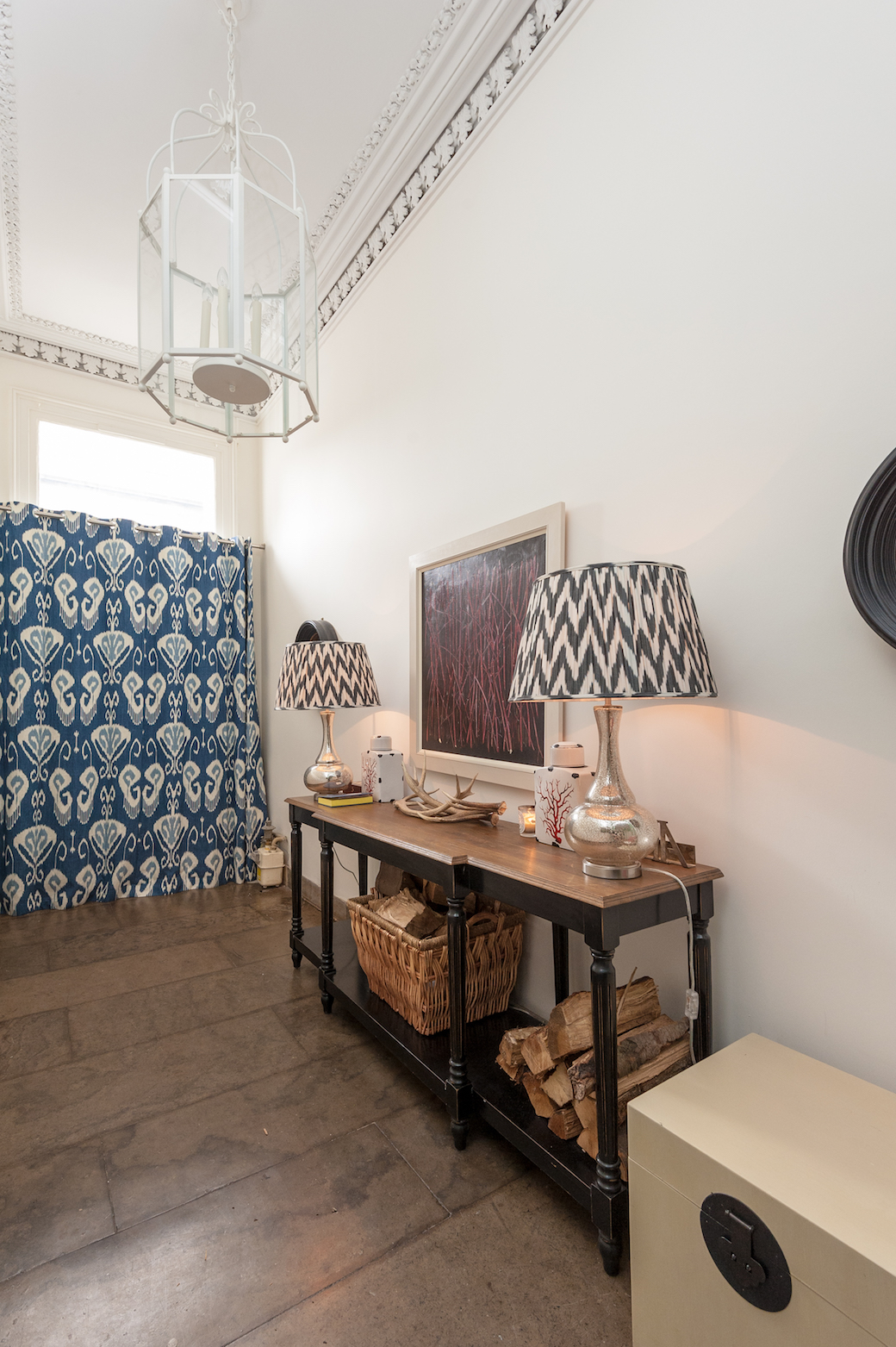 What was it about this property that made it stand out?

“We’d lost several flats to sealed bids. We viewed this flat on the Monday and it went to sealed bids the following day so we weren’t hopeful. Lucky for us we could move quickly and the owners accepted our offer. As well as the size of the rooms, the flat has great architectural interiors and is triple aspect so it’s very light.” 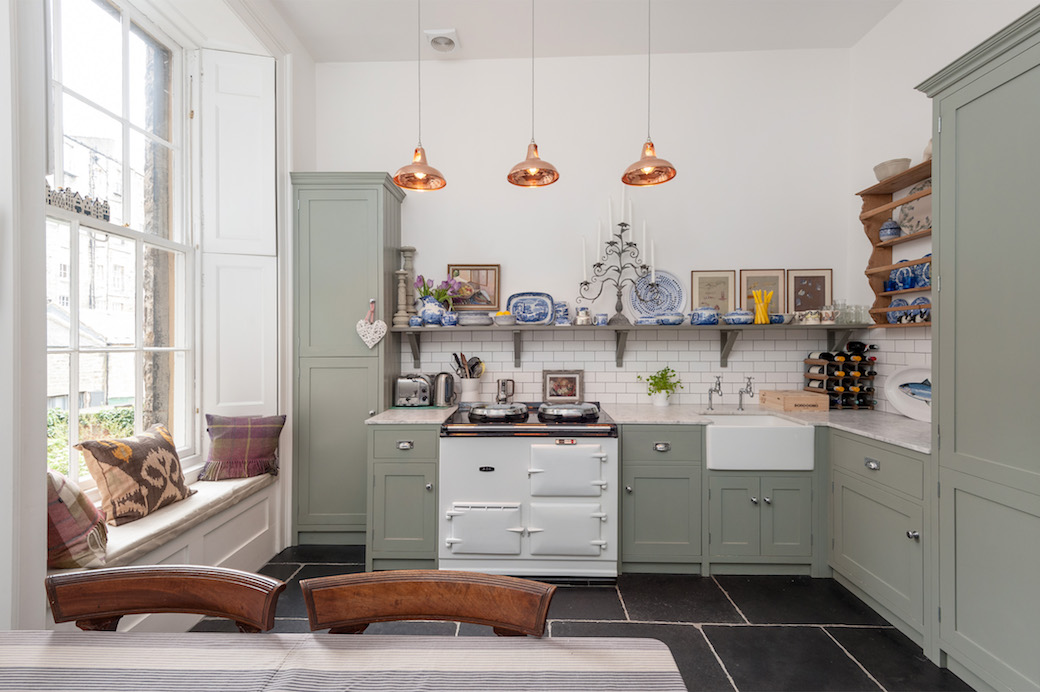 What did the refurbishment involve?

“We replaced the central heating system, installed a new kitchen, moved the family bathroom and added two en-suites. We totally redecorated, refurbished the windows and shutters, re-plastered the Artex ceilings, opened up the fireplaces and added a wood burning stove to the fireplace in the sitting room, and repaired the Georgian flagstone floors.” 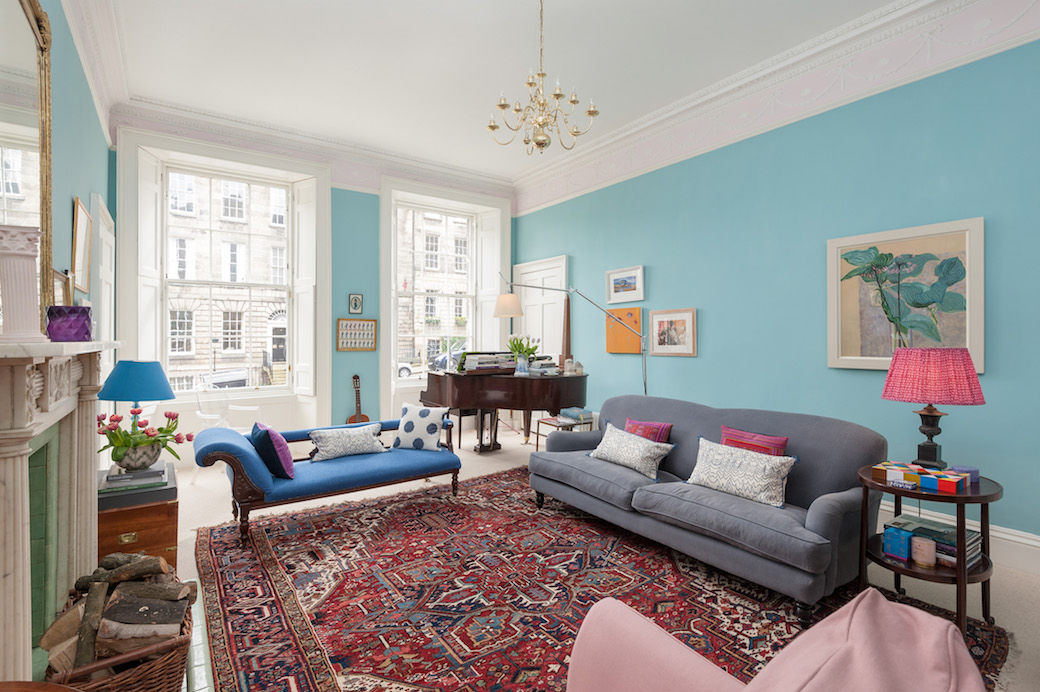 Where did you take your ideas and inspiration from when considering the interior?

“I (Andrew) work at the UN and we’ve had a nomadic life so have picked up furniture, paintings, rugs and textiles on our travels. We love John Derian in New York, Pentreath & Hall in London and Svenskt Tenn in Stockholm. We visit the vide greniers and brocantes in South West France where we have a holiday home. A lot of the furniture has come from the antique shops of Causewayside in Edinburgh, the second hand shops on Leith Walk, and the sales at auctioneers Lyon and Turnbull.

We also drew inspiration from decorators such as the great David Hicks, Robert Kime, Rita Konig and Ben Pentreath. We love Ben’s Inspiration blog, and we love how he combines a strong use of colour, pattern and classical detail with bold contemporary fabric and furniture.” 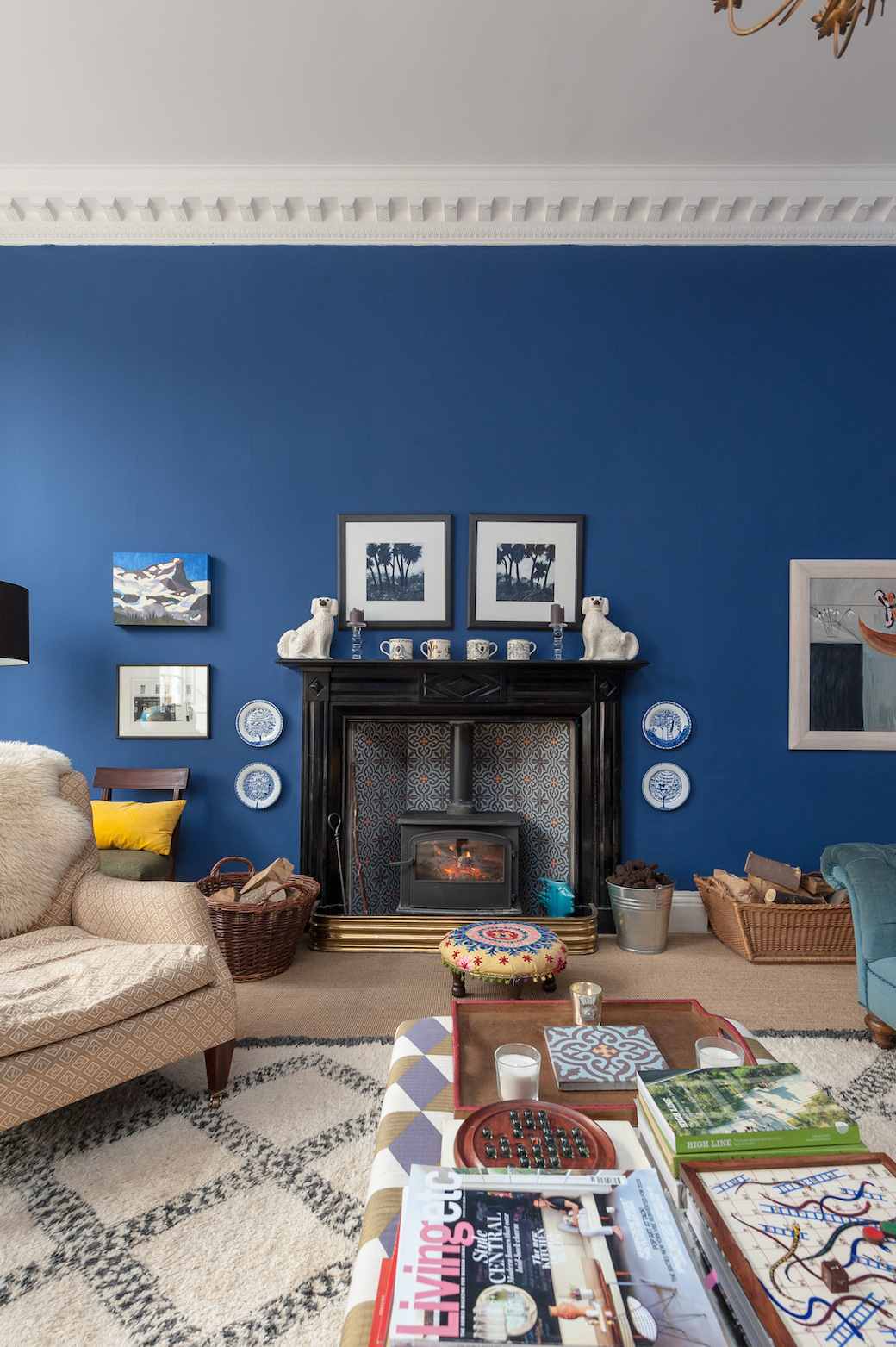 “And we collect contemporary Scottish art. We have several pieces by Glasgow painter and sculptor Jack Sloan, who we commissioned to paint the mural in our bedroom: an ‘Edinburgh Capriccio’ featuring the temples and monuments of the city emerging through a soft mist. Above this architectural fantasy, slightly surrealistically, fly several brightly painted parrots!” 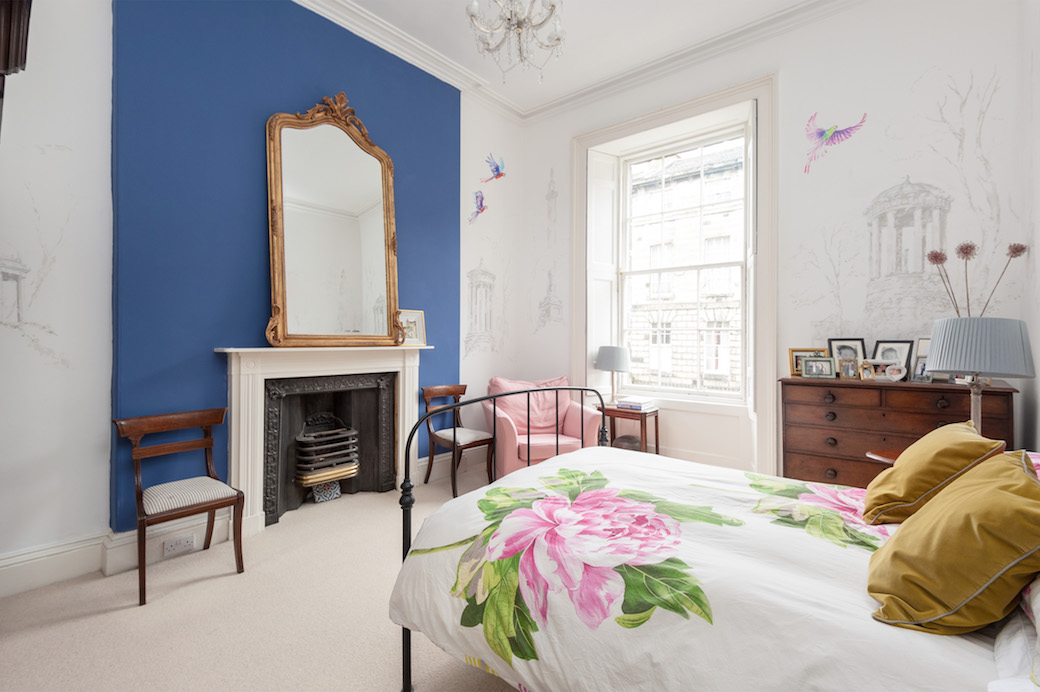 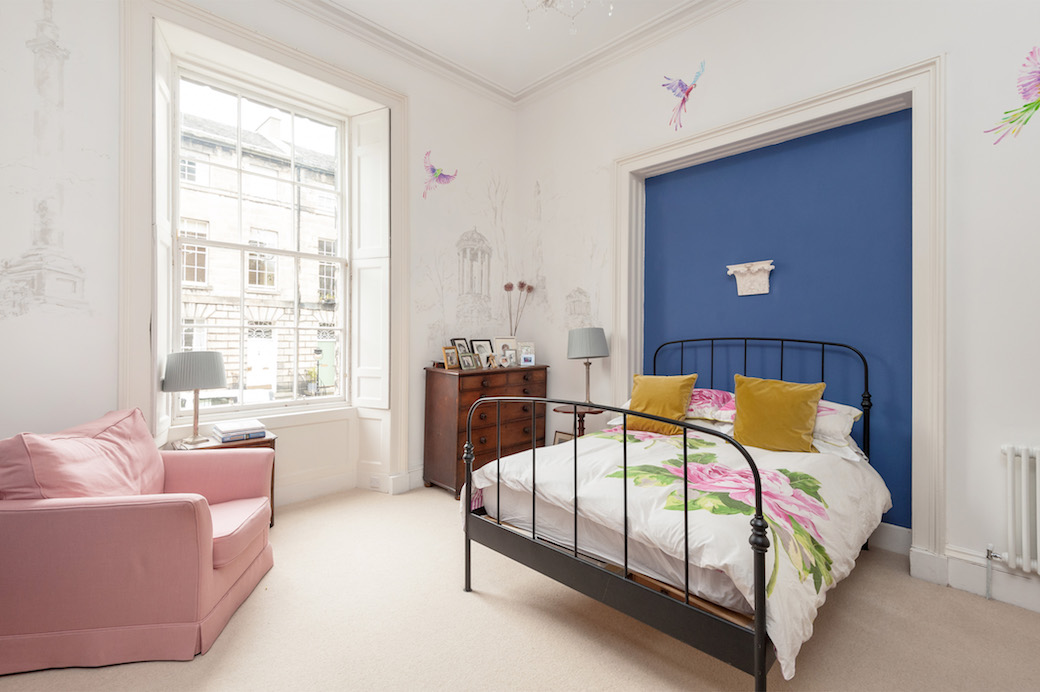 How did you choose the colour palette?

“It’s a cliché but we tried out loads of tester pots. We used colours from Farrow & Ball.

The drawing room is probably the most traditional room in the flat. The walls are painted in Blue Ground with the frieze picked out in Middleton Pink. It’s a great backdrop for a collection of ordinary and inexpensive Scottish antique furniture, pictures and prints.” 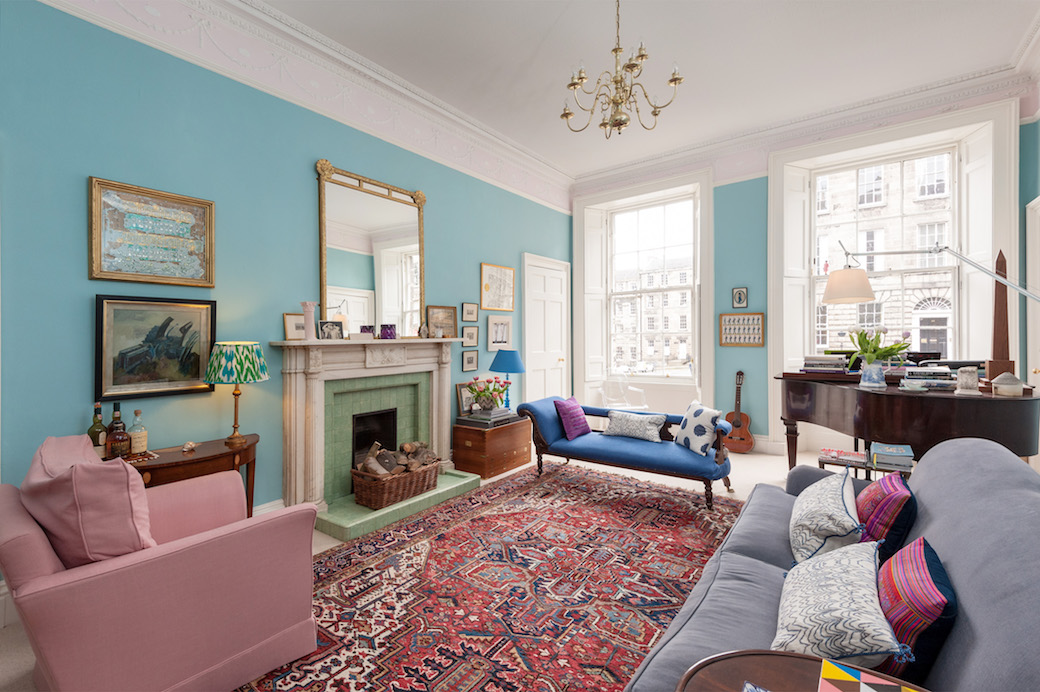 “The hallway is painted in Arsenic and Wimborne White and provides a dramatic arrival to the flat. We picked out the original recessed plasterwork arches which group to form the pattern of a ‘triumphal arch’ on one wall. The casts and sculpture reliefs are by Peter Hone, sourced at LASSCO, the architectural salvage yard in London and Oxfordshire.

The hallway, which has the original flagstone flooring, leads to a central dining space that’s been used for Christmas and other dinner parties. The lanterns were hand made in Edinburgh by Rodney French at Lonsdale & Dutch.” 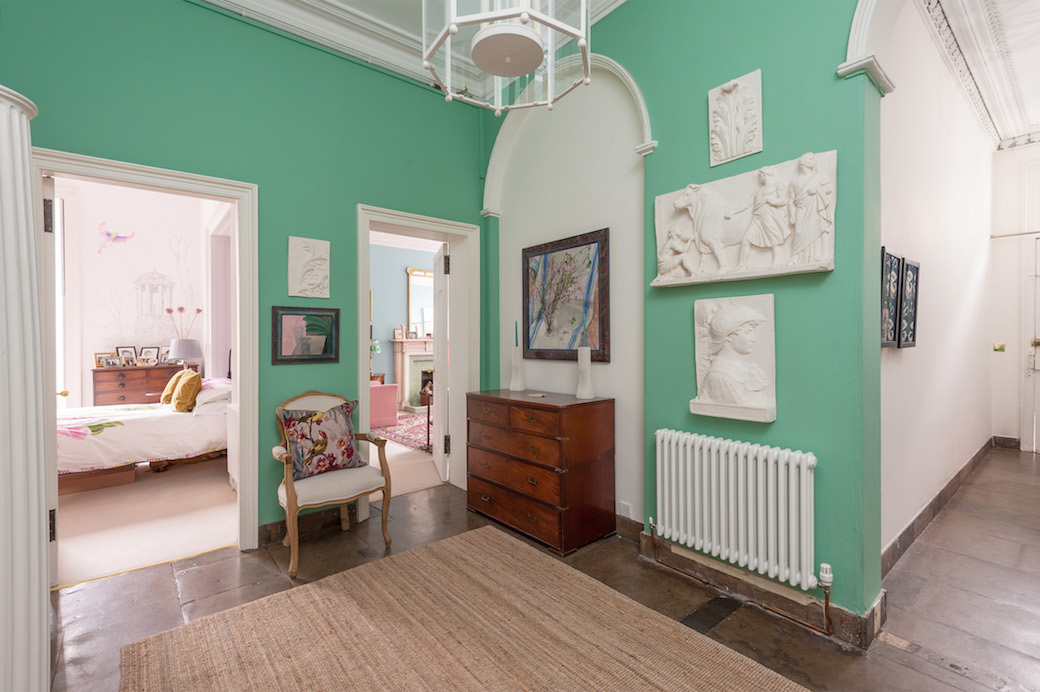 “The sitting room, in contrast to the drawing room, uses layers of more contemporary fabrics, furniture and lighting. The colours are Drawing Room Blue and Wimborne White. We felt like students painting our bedroom black when we started – it looked awful and dingy, but after a few coats we were convinced.

The deep blue colour provides an amazing backdrop to our fabrics by Josef Frank bought at Stockholm’s Svenskt Tenn. We keep adding more and more colour and pattern and we keep thinking about ‘editing’ it, but more keeps being added. The room is great in the evening, with the collection of globes lit and the 1970s Italian wheatsheaf chandelier. We added a wood burning stove and the hearth tiles were hand made in Morocco where we also bought the large Beni Ourain rug. Most of the furniture in the room came from second hand shops on Leith Walk.” 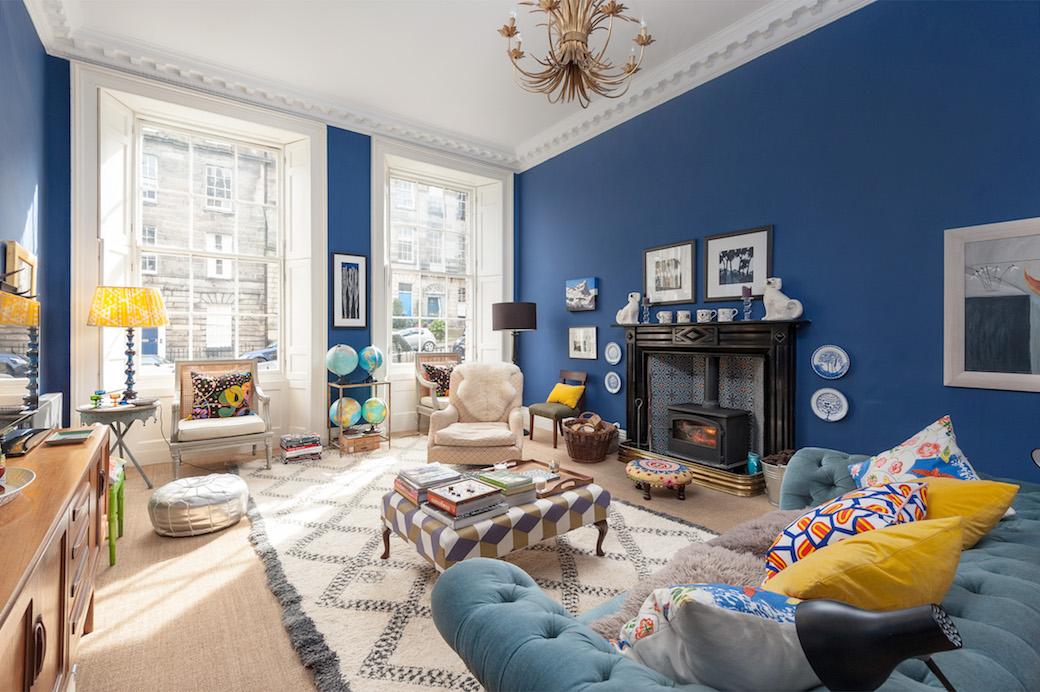 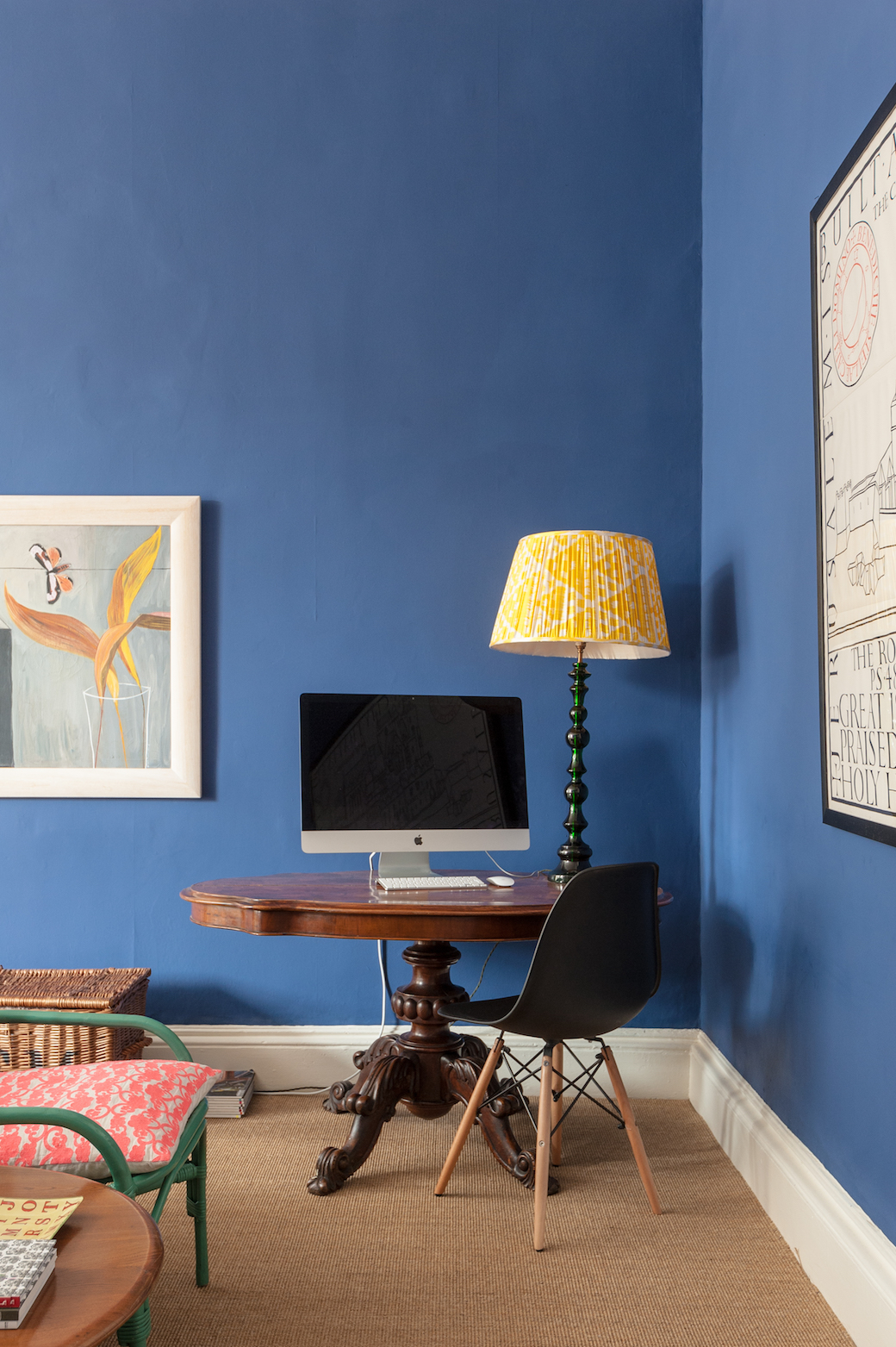 Tell us about the incredible detailing in the drawing room, and the pieces you’ve added to this space.

“In 1810, the architect Robert Reid was working on Nelson Street while still completing Robert Adam’s masterpiece, Charlotte Square, and the delicate plasterwork in the double-cube drawing room with its frieze of Garrya Elliptica swags and egg and dart cornice is identical to that found in The National Trust for Scotland’s Georgian House in Charlotte Square. Reid also designed the marble fireplace in this room with a central panel, appropriately for this street, depicting the naval victories and flags of Lord Nelson. In order to maintain the perfect symmetry of the room, Reid also included a fourth, fake door to exactly match the double Edinburgh presses which flank the fireplace.” 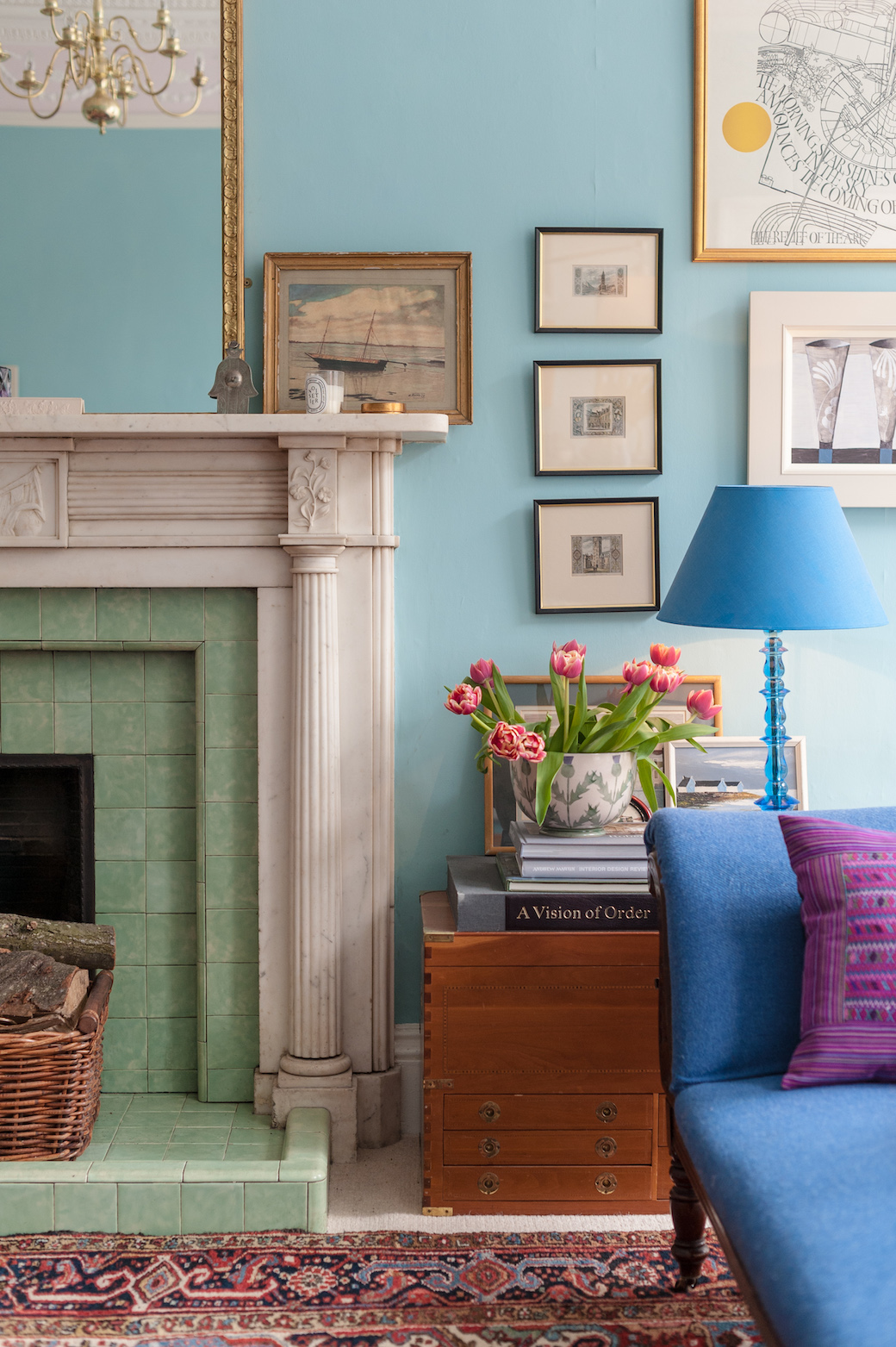 “Opposite the two full height windows, four of John Slezer’s hand coloured engravings of Scotland hang either side of a fine Georgian bureau. A Tolomeo floor lamp, designed by Michele De Lucchi and Giancarlo Fassina for Artemide, is poised above the grand piano. Other table lamps are designed by Marianna Kennedy sourced at Pentreath & Hall, and the ‘Turquoise Flower’ Ikat Lampshade is by Melodi Horne, also from Pentreath & Hall. The room also features several still life paintings from the family’s collection of works by the artist Josephine Broekhuizen who is based on the Isle of Arran.” 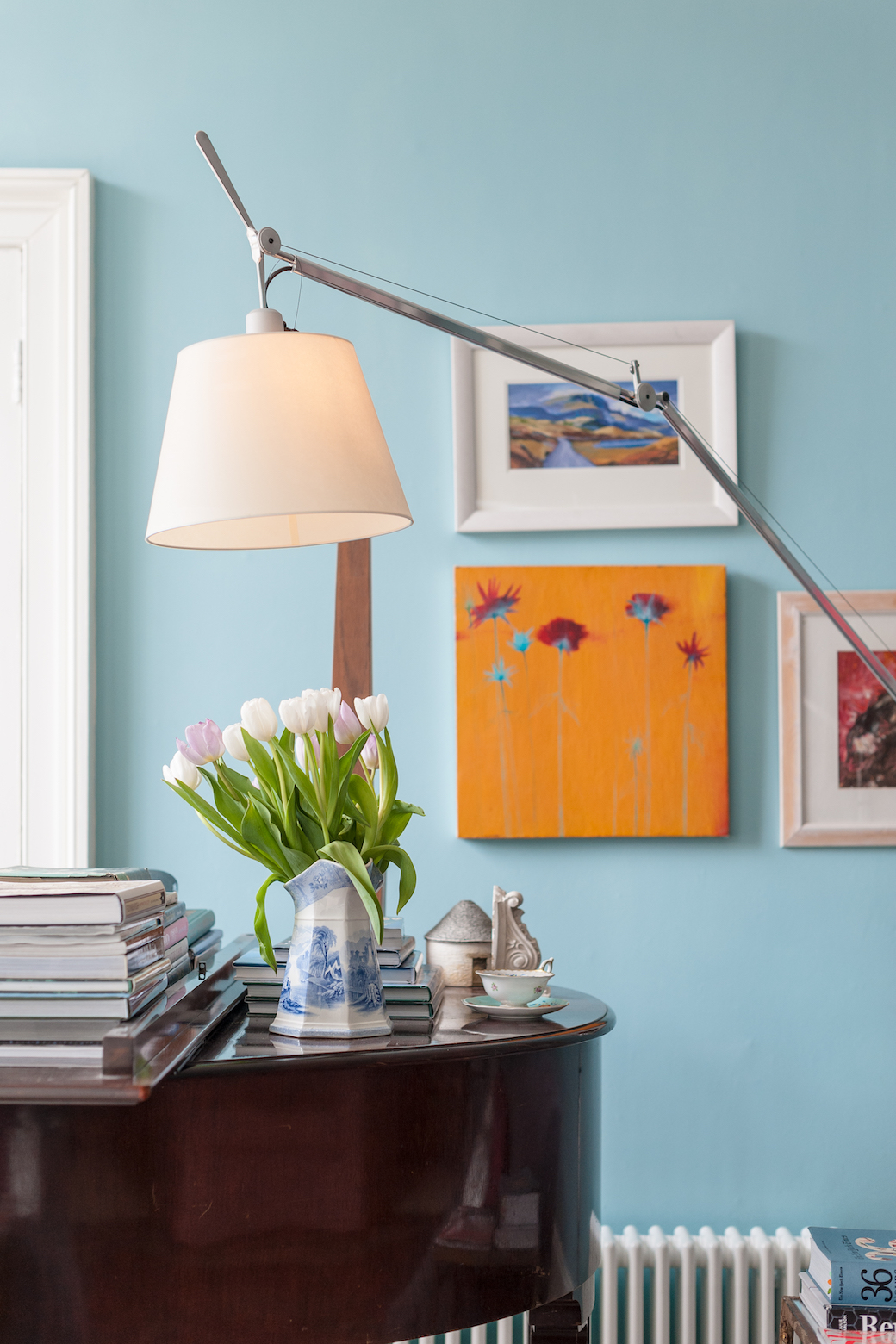 Where did you take your inspiration from when redesigning the kitchen?

“Previously the kitchen was a pokey galley kitchen at the back of the flat and we knocked through into what was the main bathroom, doubling its size. We took lots of ideas from Remodelista and for the units we stole ideas from Plain English and DeVOL kitchens – which we couldn’t afford – and had them hand made by a local joiner and painted Pigeon, again by Farrow and Ball. We sourced the Carrara marble from Stonecraft in Edinburgh, and the taps online.” 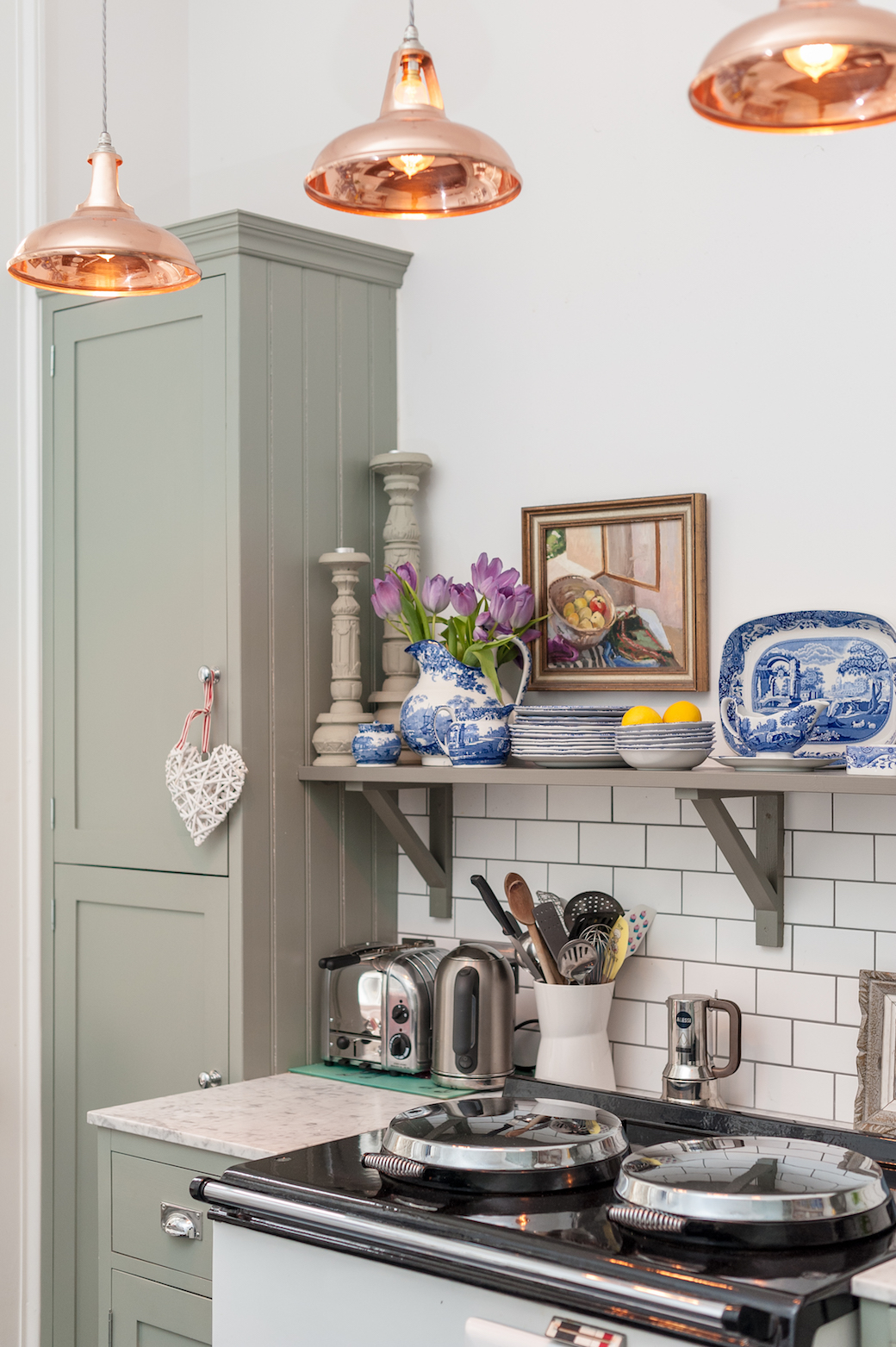 “The kitchen receives excellent sunlight due to its southerly aspect and a window seat overlooks the courtyards and rear gardens of Abercromby Place. We knew we wanted an AGA – three and half metre high rooms can get chilly in Edinburgh! – but we cheated and had an electric AGA installed. We also knew we didn’t want wall cupboards, which we felt wouldn’t be fitting for a traditional flat, and would be lost on the high walls. Instead we opted for a generous plate shelf which holds a traditional blue and white Spode dinner service that has been passed down from Anna’s family and gets used every day.” 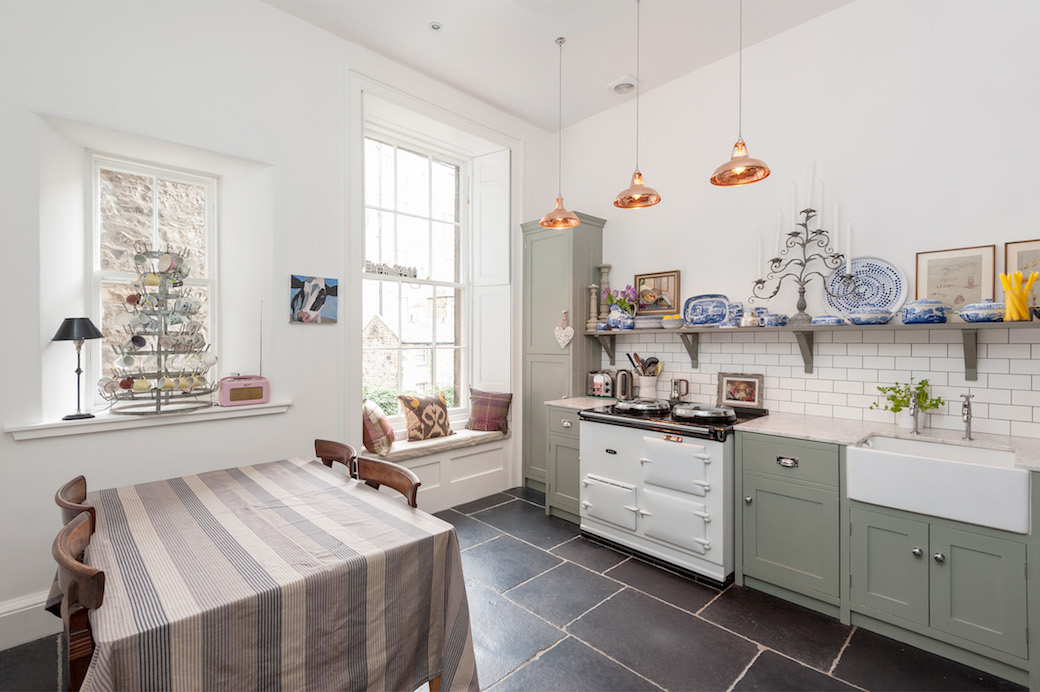 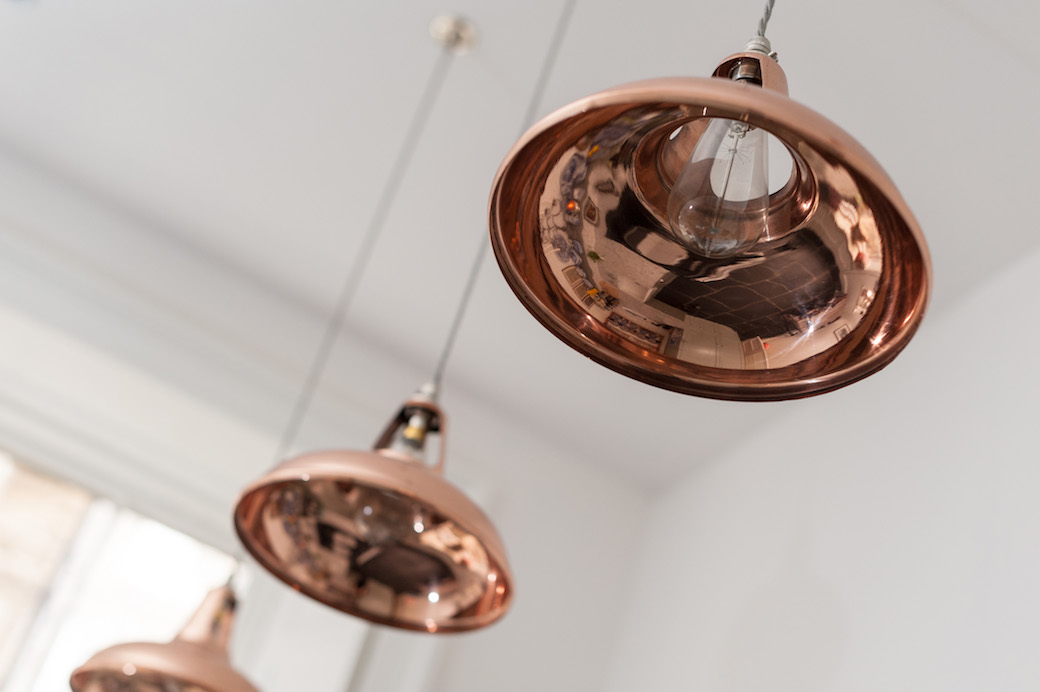 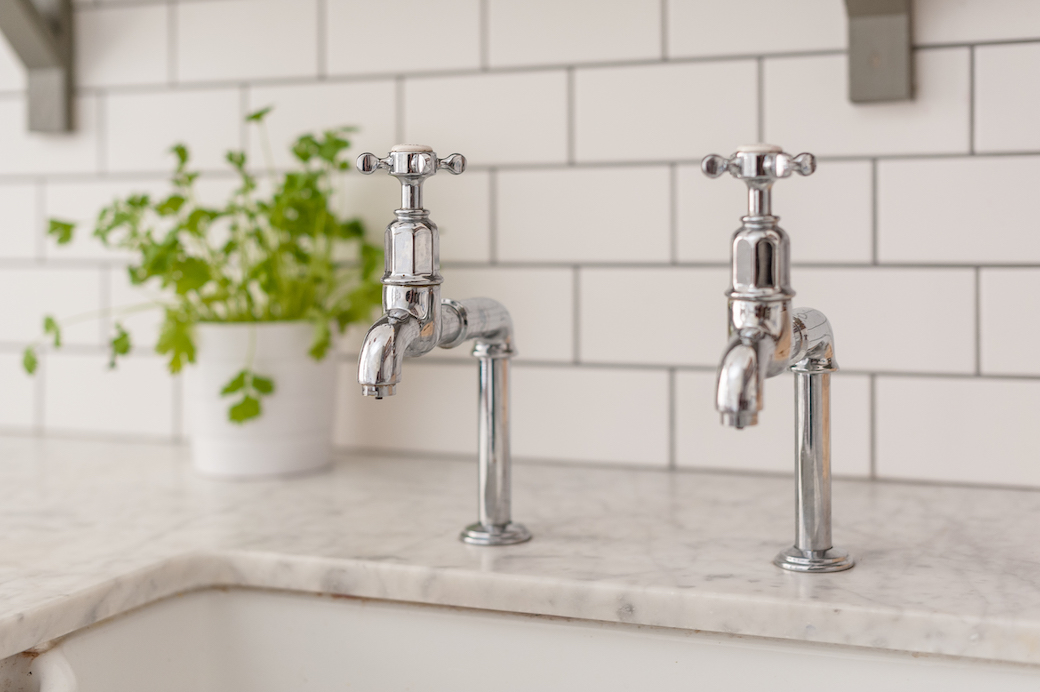 How did you redesign the bathrooms?

“We had probably the worst bathrooms in Edinburgh – there was a tiny plastic shower cubicle that you were afraid to use, or touch the walls because you didn’t know what was growing on the tiles. The new bathroom fittings are from Fired Earth and the Carrara marble surround and floor again came from Stonecraft. The redesign was planned by David Bonar at F3 Surveyors in Leith who was a genius in fitting bathrooms into incredibly small spaces, but which now feel really spacious.” 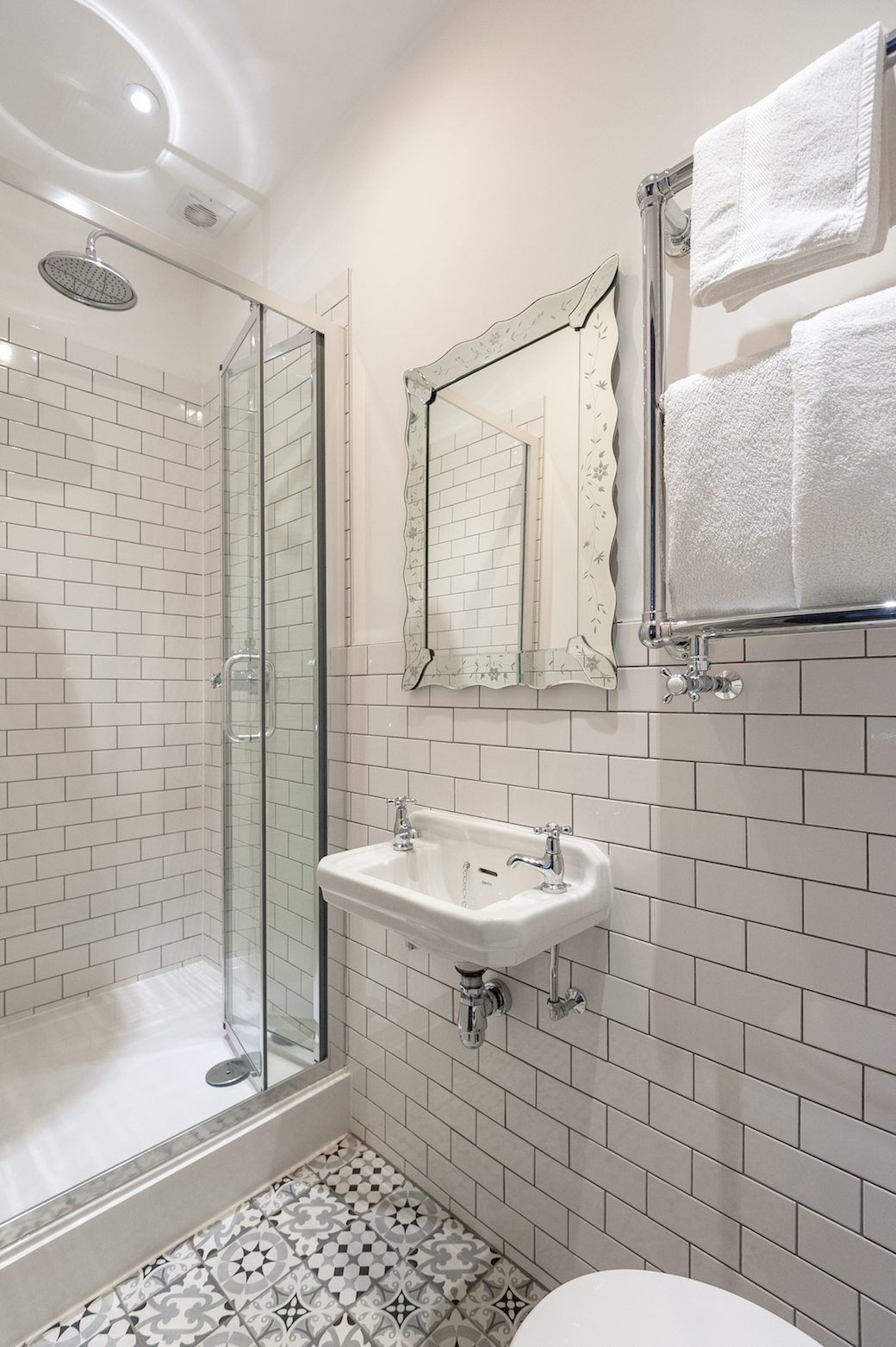 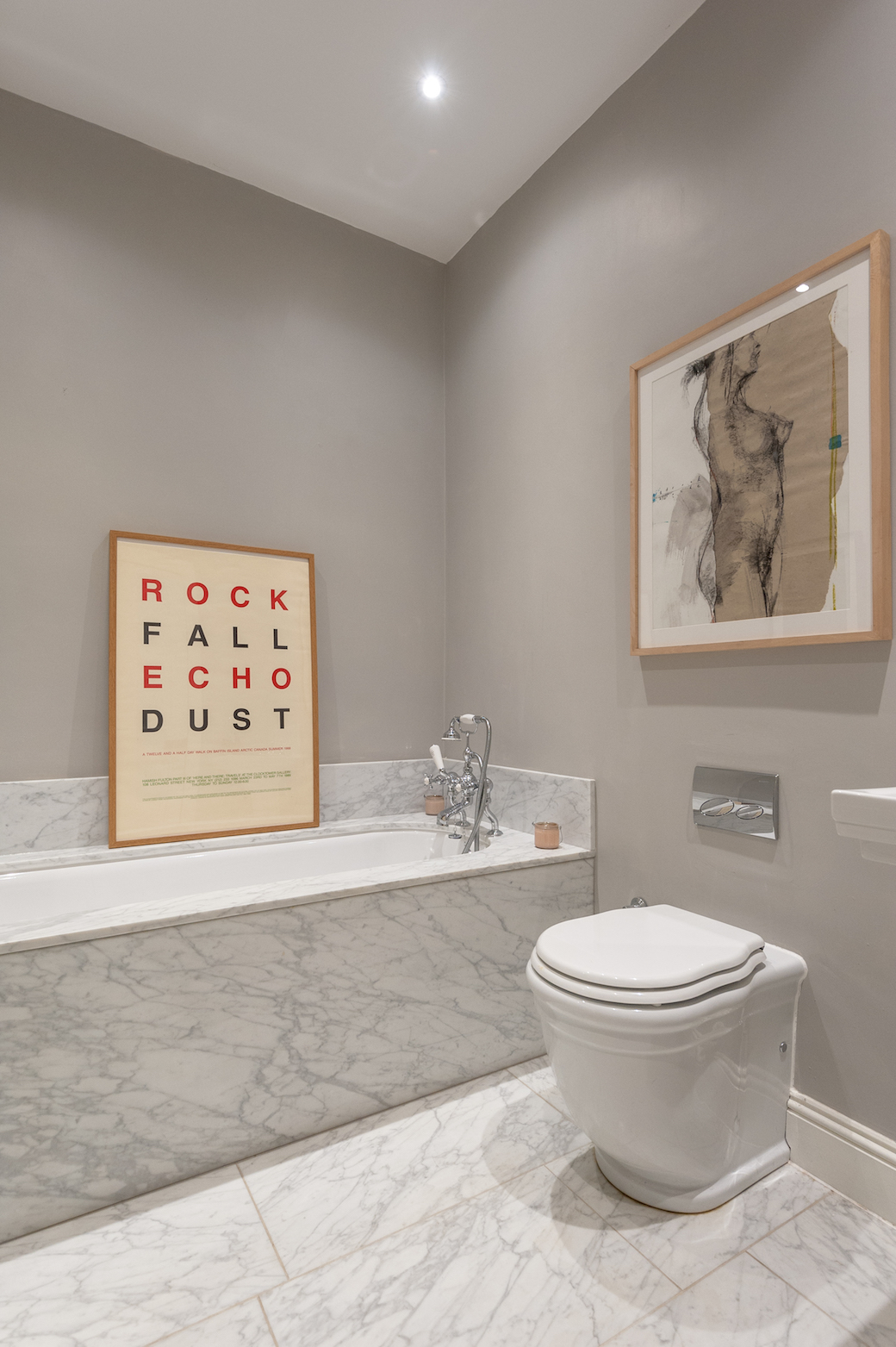 Did your existing furnishings simply fit into this interior, or did your style evolve with this property?

“The flat’s been a great testing ground for our ideas, and we’re constantly moving things around and trying out new pieces and colours. We’re lucky we can move things between our house in Switzerland and the flat in Edinburgh – the roof rack of our Land Rover Defender usually gets a few funny looks from other drivers as we’re waiting in the queue at the Channel Tunnel.” 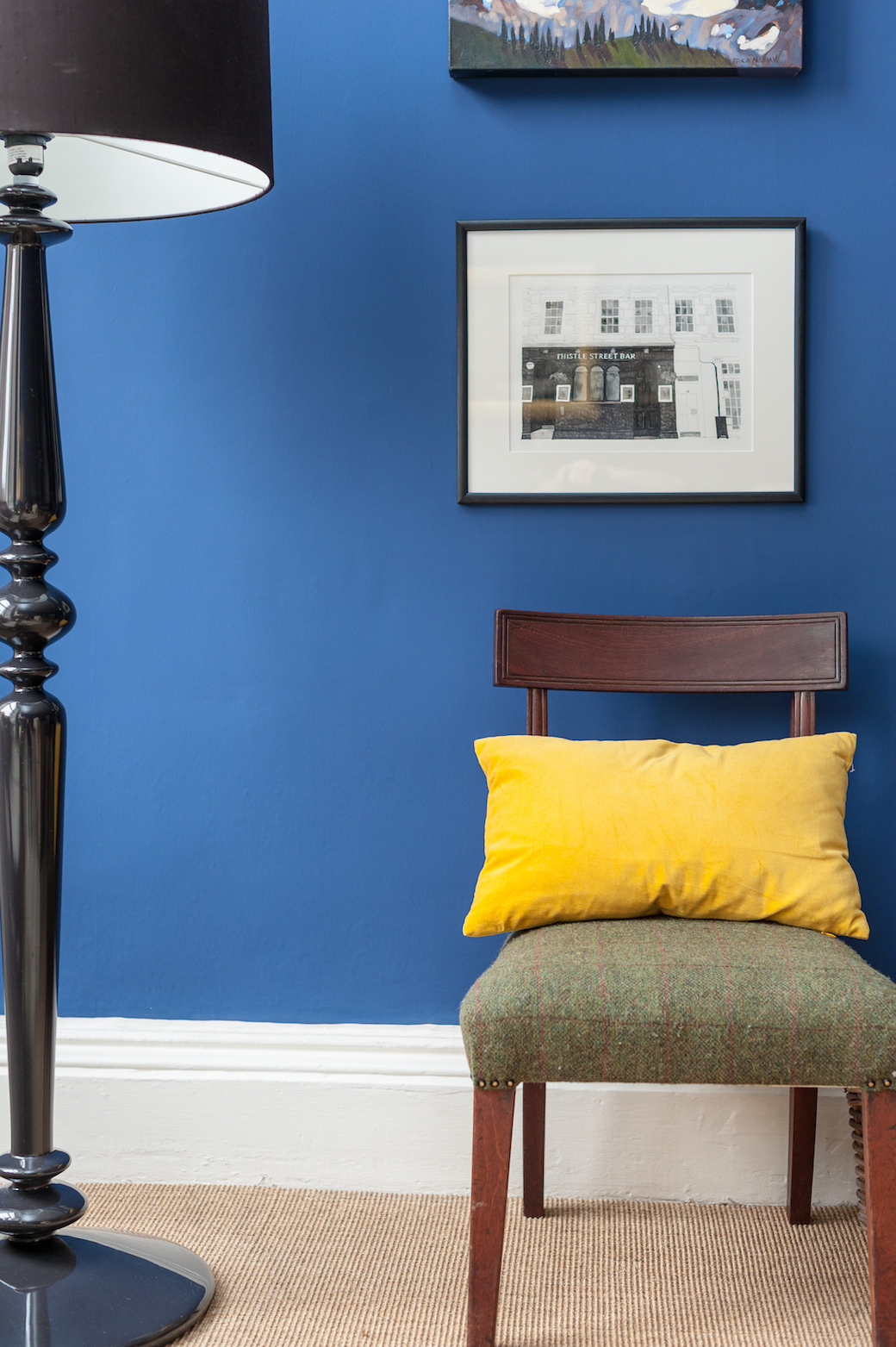 What were the main challenges of this refurbishment?

“Living in the flat through the renovation, and realizing towards the end that we might move sooner than we thought and then realizing that not everyone would like the bold colours. People say that you should go neutral before you sell, but we were sick to death of every flat we viewed in Edinburgh being painted pale grey.” 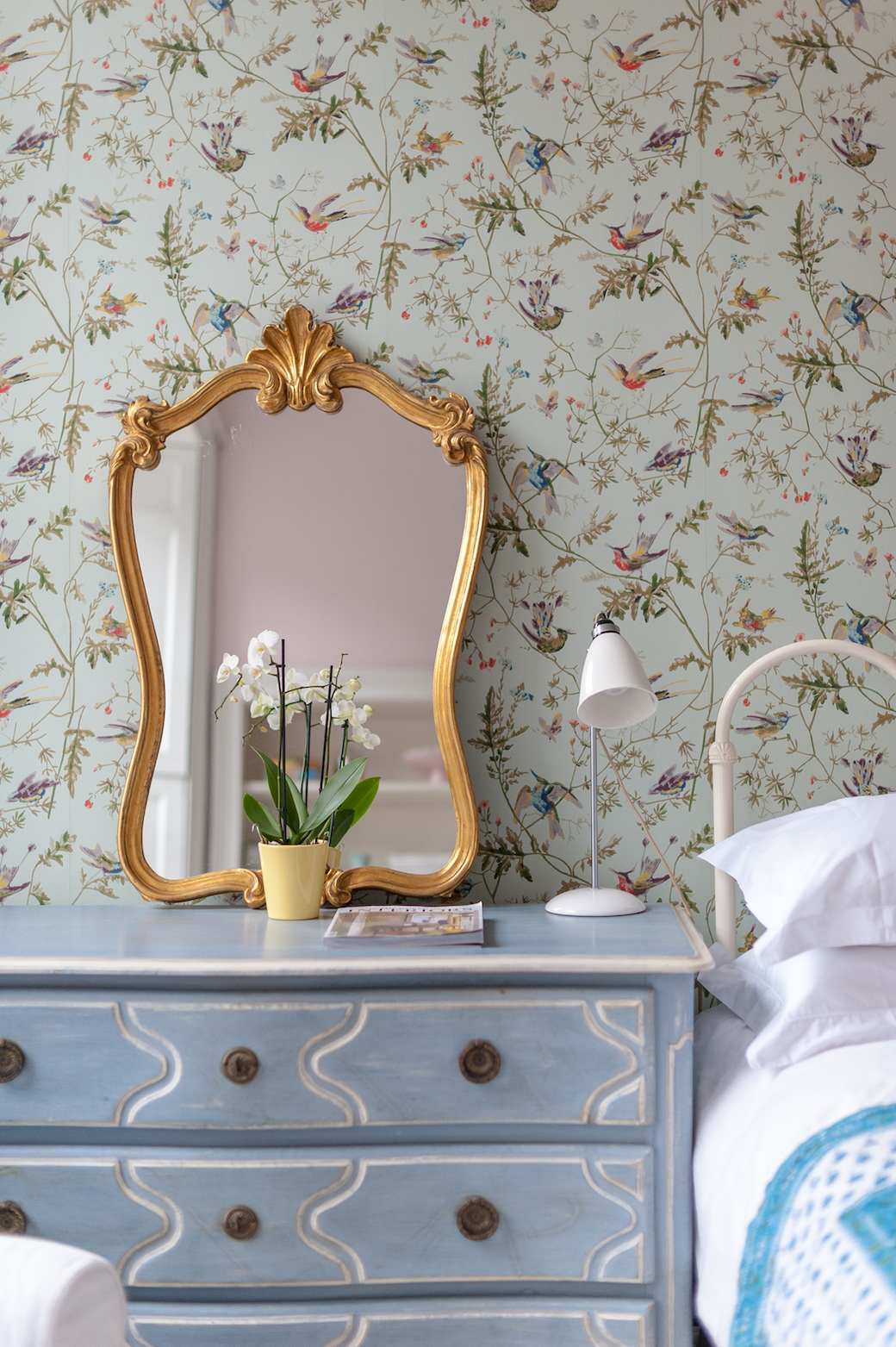 “Other than Bramble Bar and Kay’s Bar… We’ve loved the New Town since we were students and have always wondered what it would be like to live here. We’re glad we jumped in with both feet and didn’t wait until I’d retired. Also, it’s been great having the keys to Queen Street Gardens East, which is one of the biggest and best private gardens in the New Town.

For the flat itself, we love the neoclassical proportions and the size of rooms, and the natural light thanks to the triple aspect.” 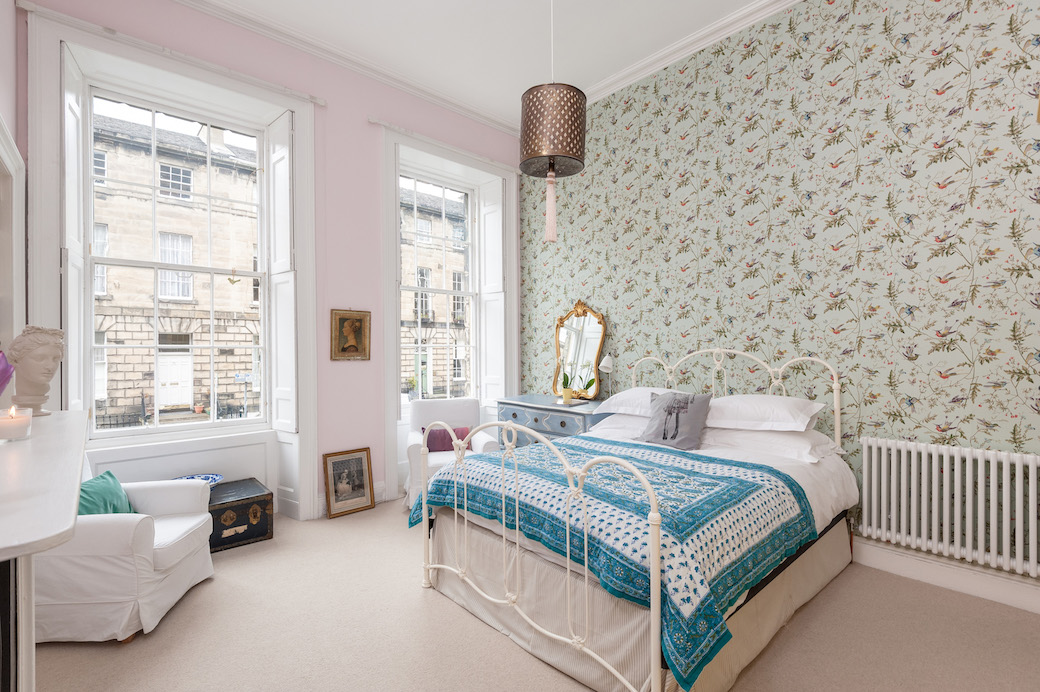 How will this property inspire where you live next?

“We’ve fallen in love with the house on Jordan Lane that you featured here last week… Whatever we take on, it’s definitely not going to be fifty shades of grey. Decorating the flat has encouraged us to take risks with colour and fabric. We’re not afraid of brown mahogany furniture which can look great next to midcentury pieces and modern framed posters. We love the great contrast between old and new.” 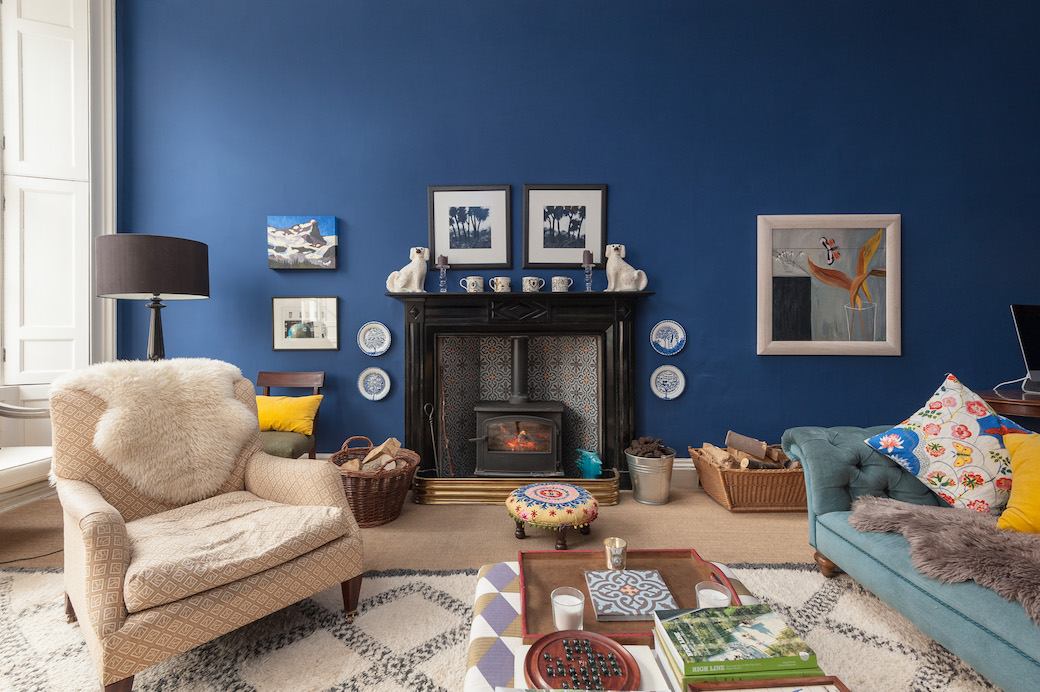 “And this flat has taught us to be patient. Although we’ve only been here two years it feels like we’ve been decorating it all our lives, and I think it works because it’s evolved over time.

Living here has also confirmed that Edinburgh is home, wherever I might work.” 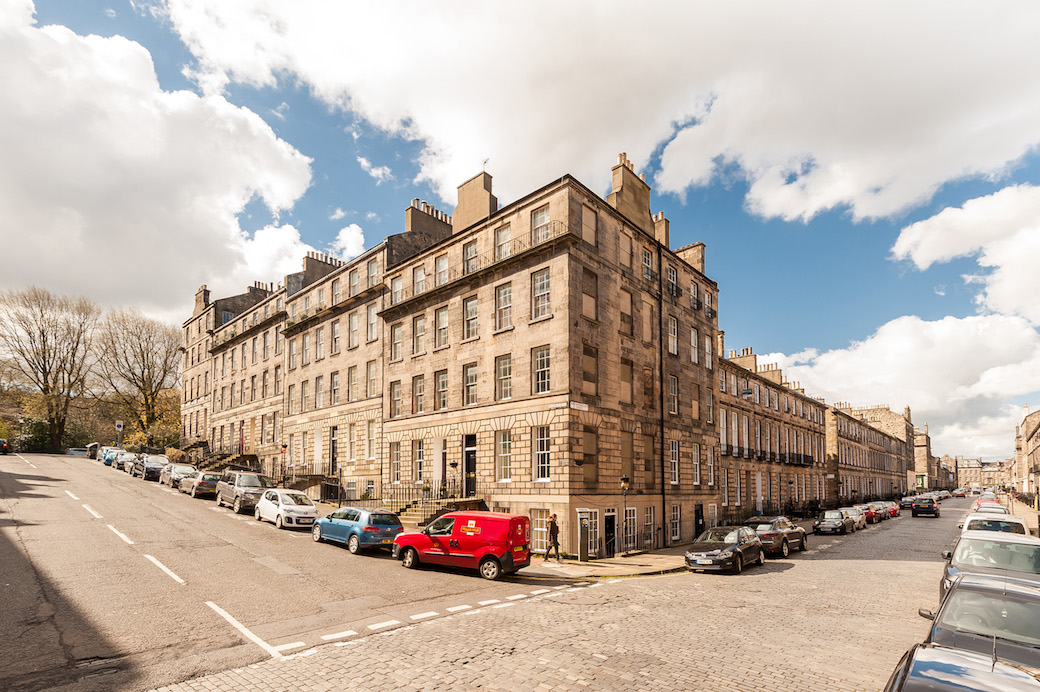 This property on Nelson Street is now under offer having been marketed by Knight Frank.