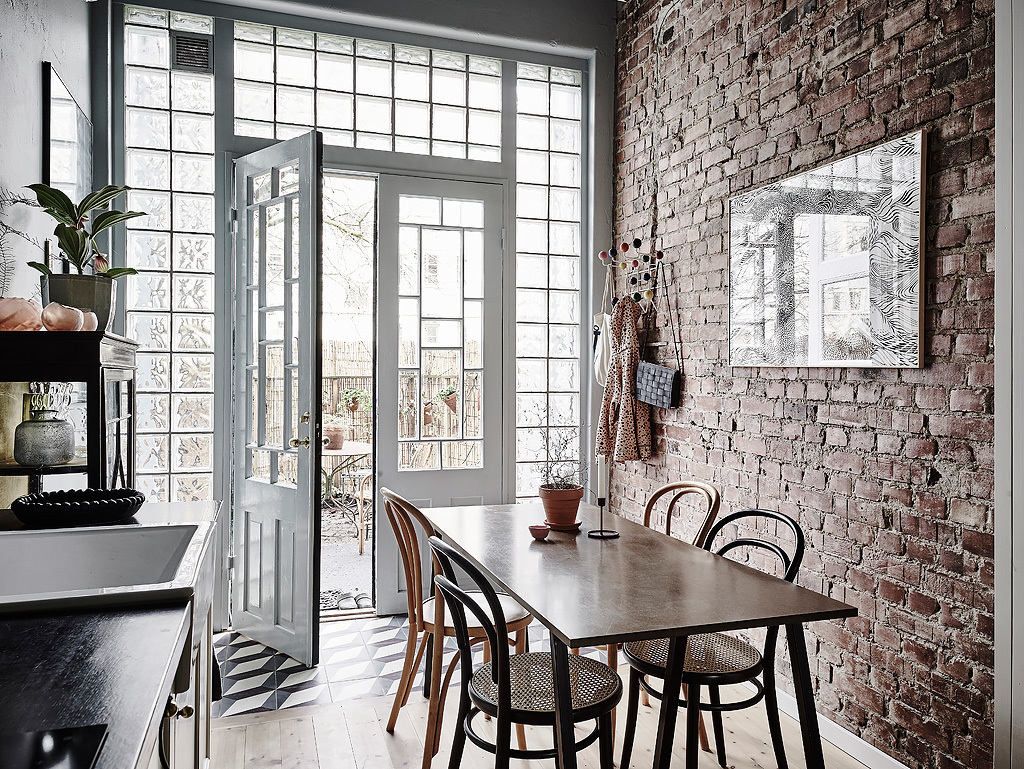 Regular readers will know that I tend to rave on about the property agency Fantastic Frank. Well, I’ve now discovered a new Scandi addiction in the incredible properties – and stunning photography and styling – from the Swedish property agent Entrance Mäkleri. You can look at pretty much any property featured on Entrance Mäkleri’s website and want to move in. I know – I’ve just been scanning through trying to decide which one to feature! But this property in Gothenburg caught my eye. Described as a “little townhouse with Brooklyn vibes”, this house is just so – dare I say it – cool, and it’s beautifully styled. 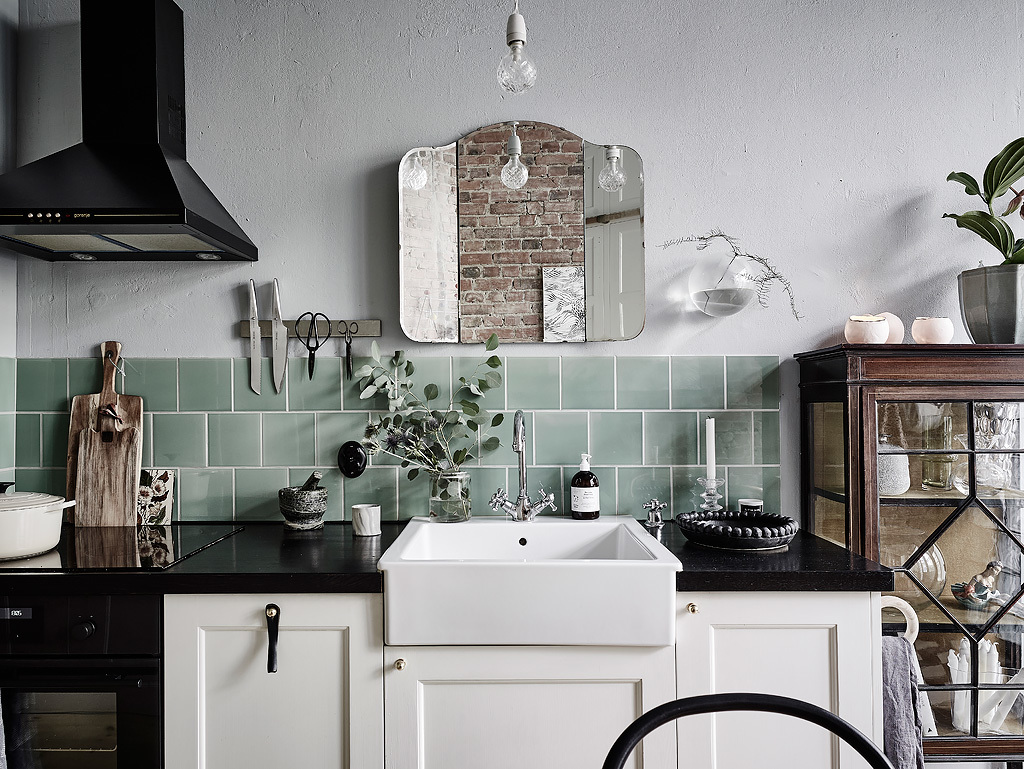 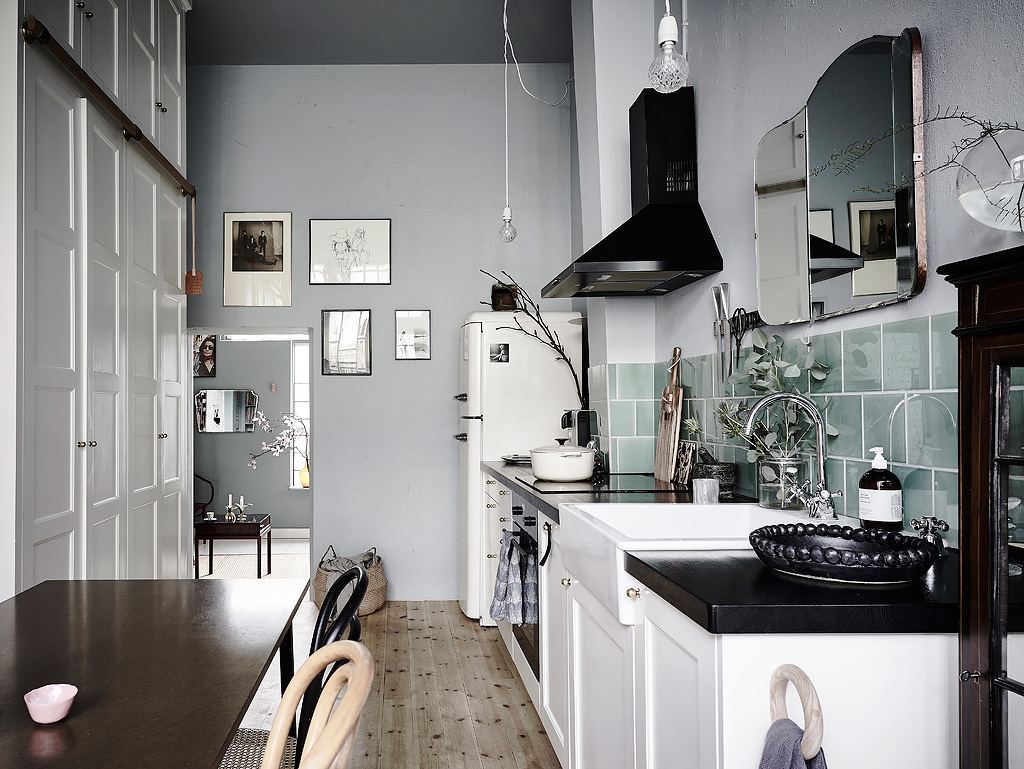 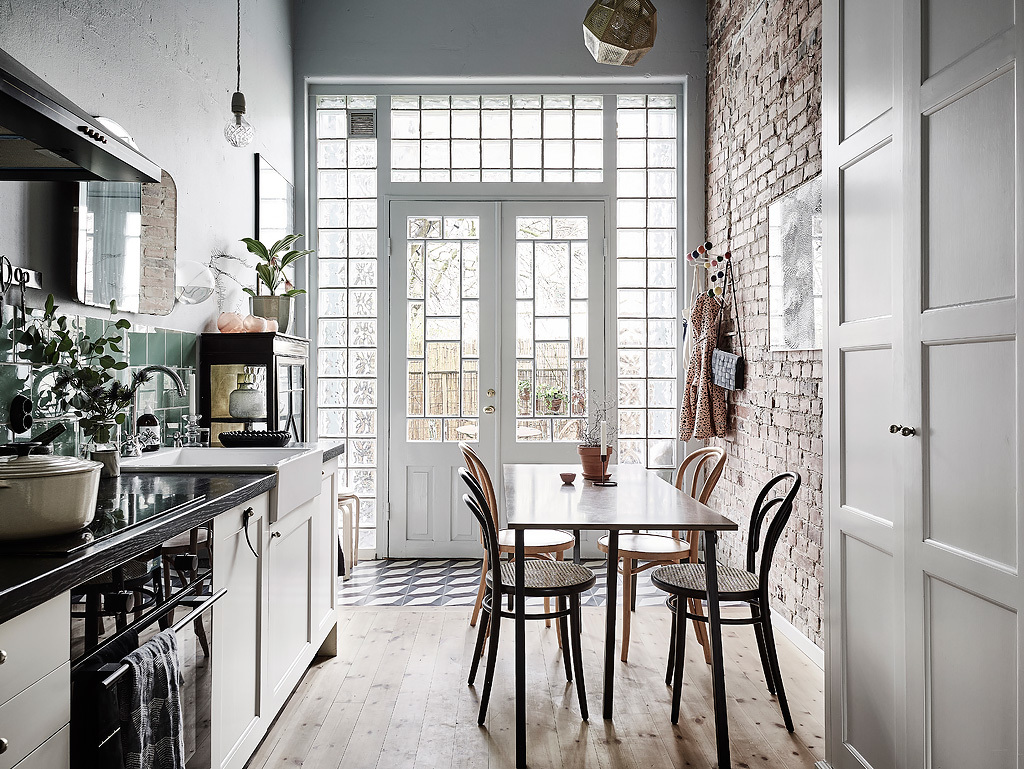 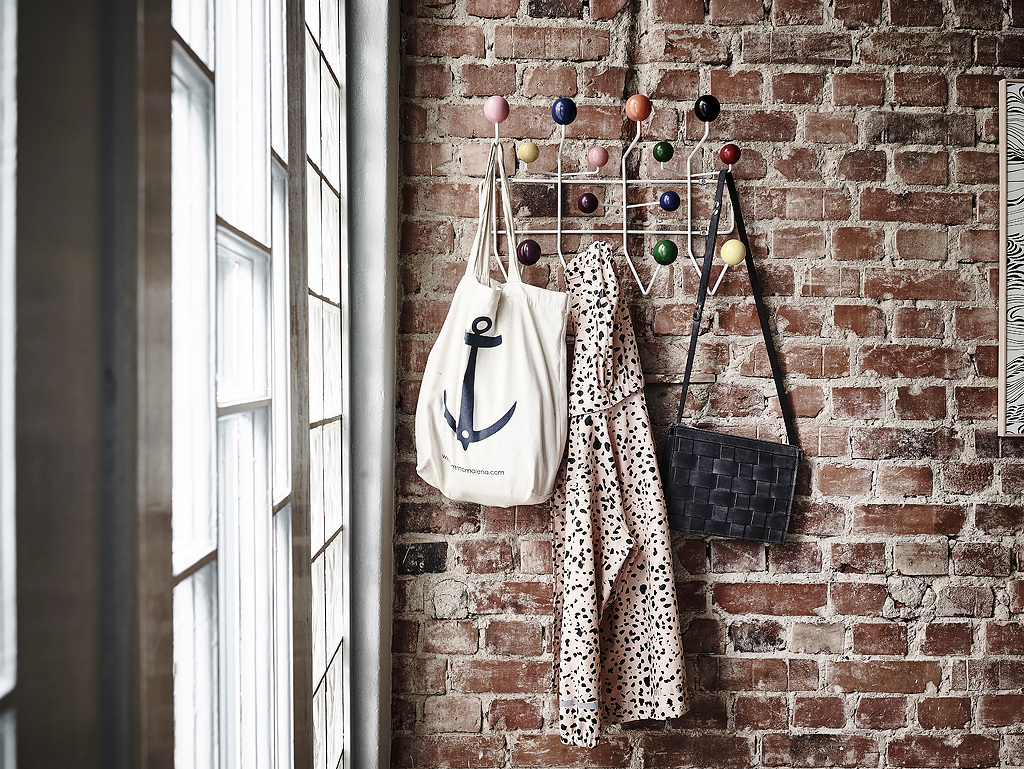 The patina of this exposed brickwork is gorgeous. It looks rugged and raw – exactly as it should. And then there’s the volume of this dining-kitchen space, which is four metres high. I’m also admiring the tall French doors with their glass brick transoms thanks to the quality of light this feature pours into the dining-kitchen. 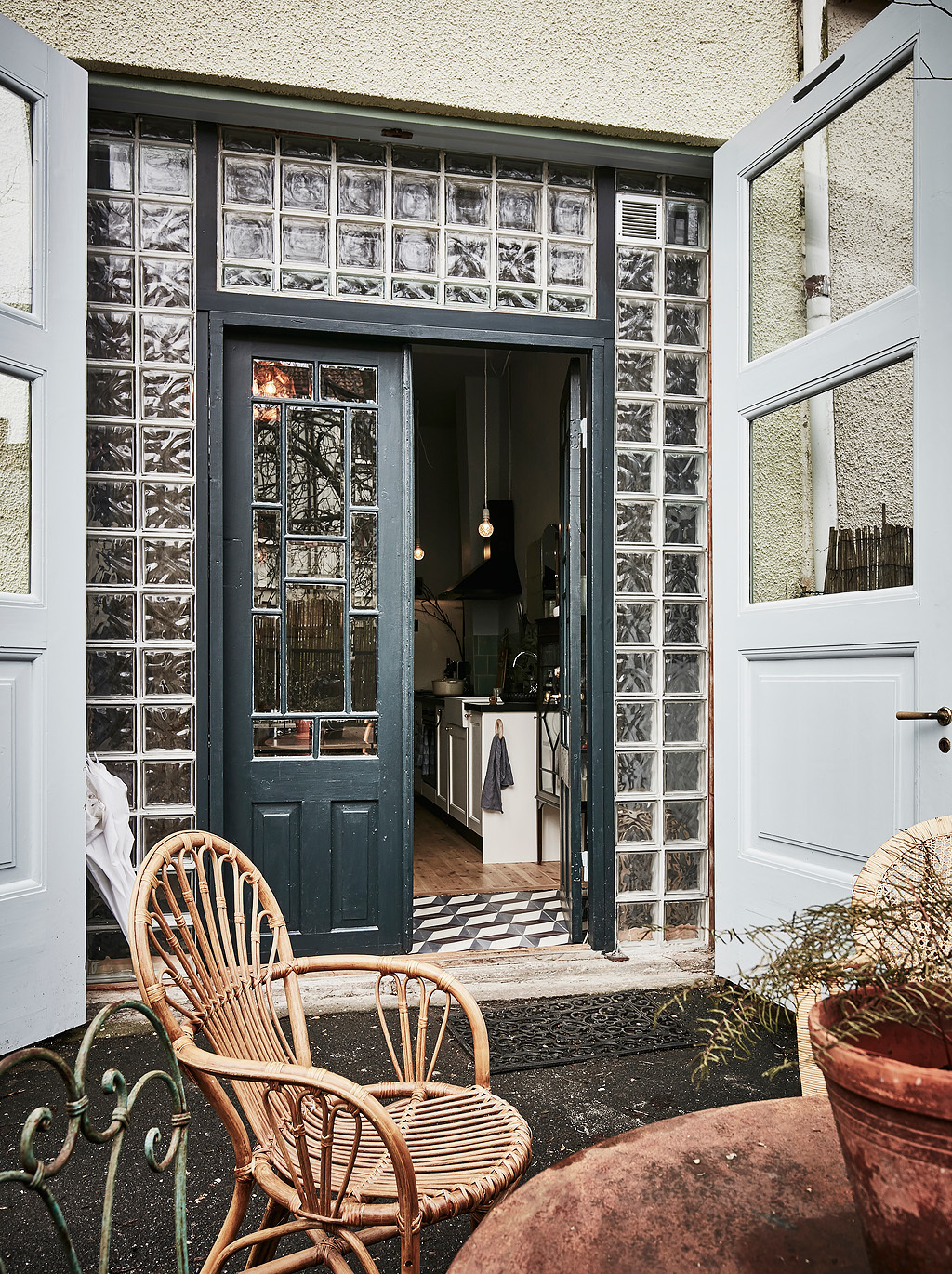 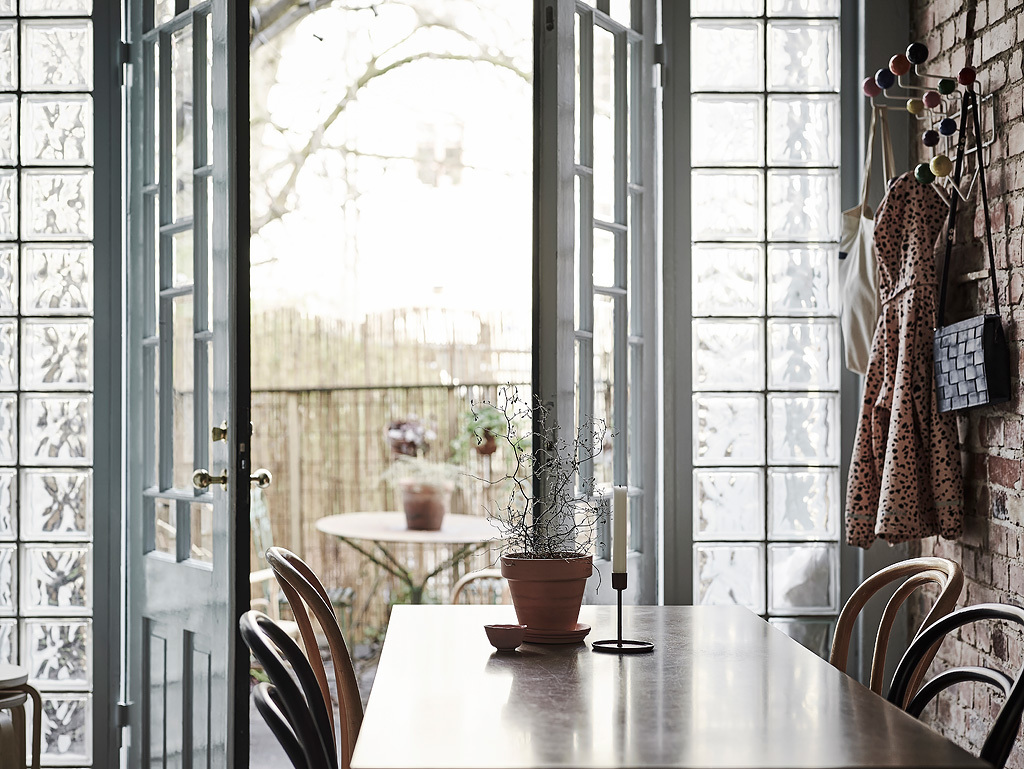 This dining area had originally been a garage and storage room and was converted in 2007, while the kitchen was redesigned in 2013 and features bespoke cabinetry. I like the gentle green hue of the tiling – the Opal Valencia tiles are similar from Fired Earth – while the walls are painted in dove grey – Gauze from Little Greene is a similar soft grey. I also like the vintage mirror over the sink. I’d never place a mirror over a kitchen sink – the last thing I’d want to do while wearily washing up is see myself! – but this detail does work well here. 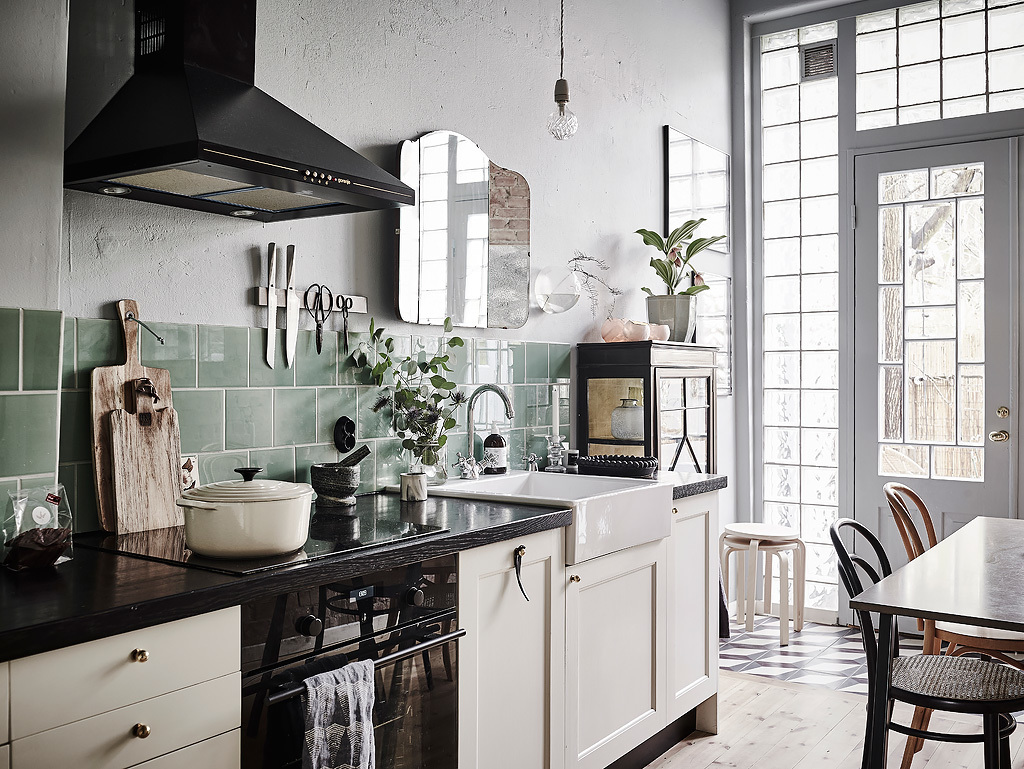 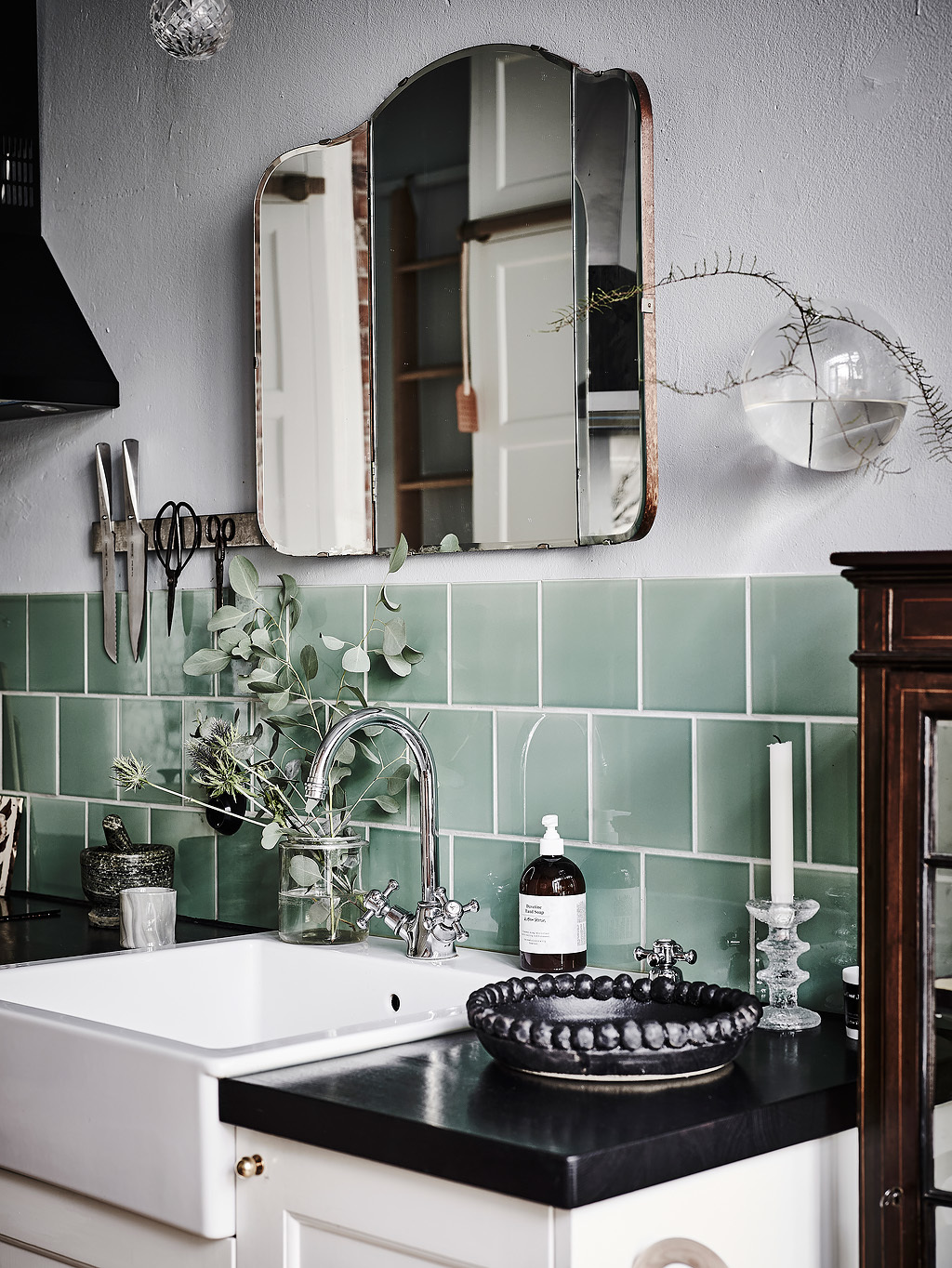 And then there’s the living space. Whitewashed floorboards, whitewashed brick, the same voluminous ceiling height, a beaten up old Chesterfield and a wall of String shelving – there’s a lot of on-trend styling going on. This part of the property was formerly an old store, which goes to explain the scale and the materials. 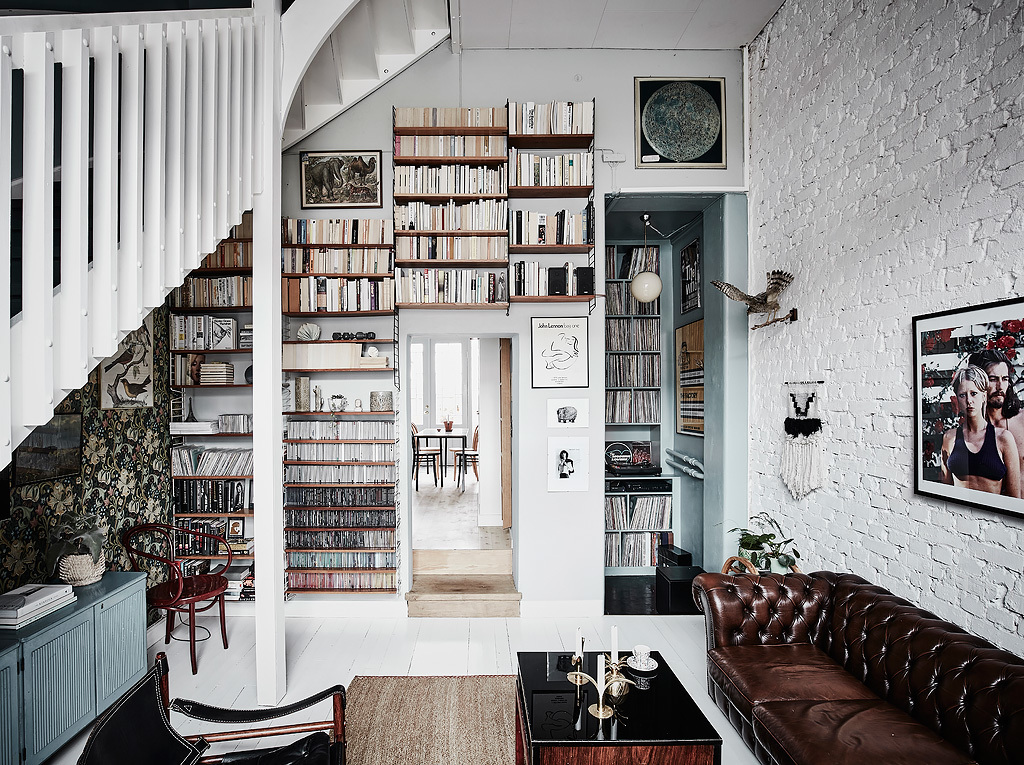 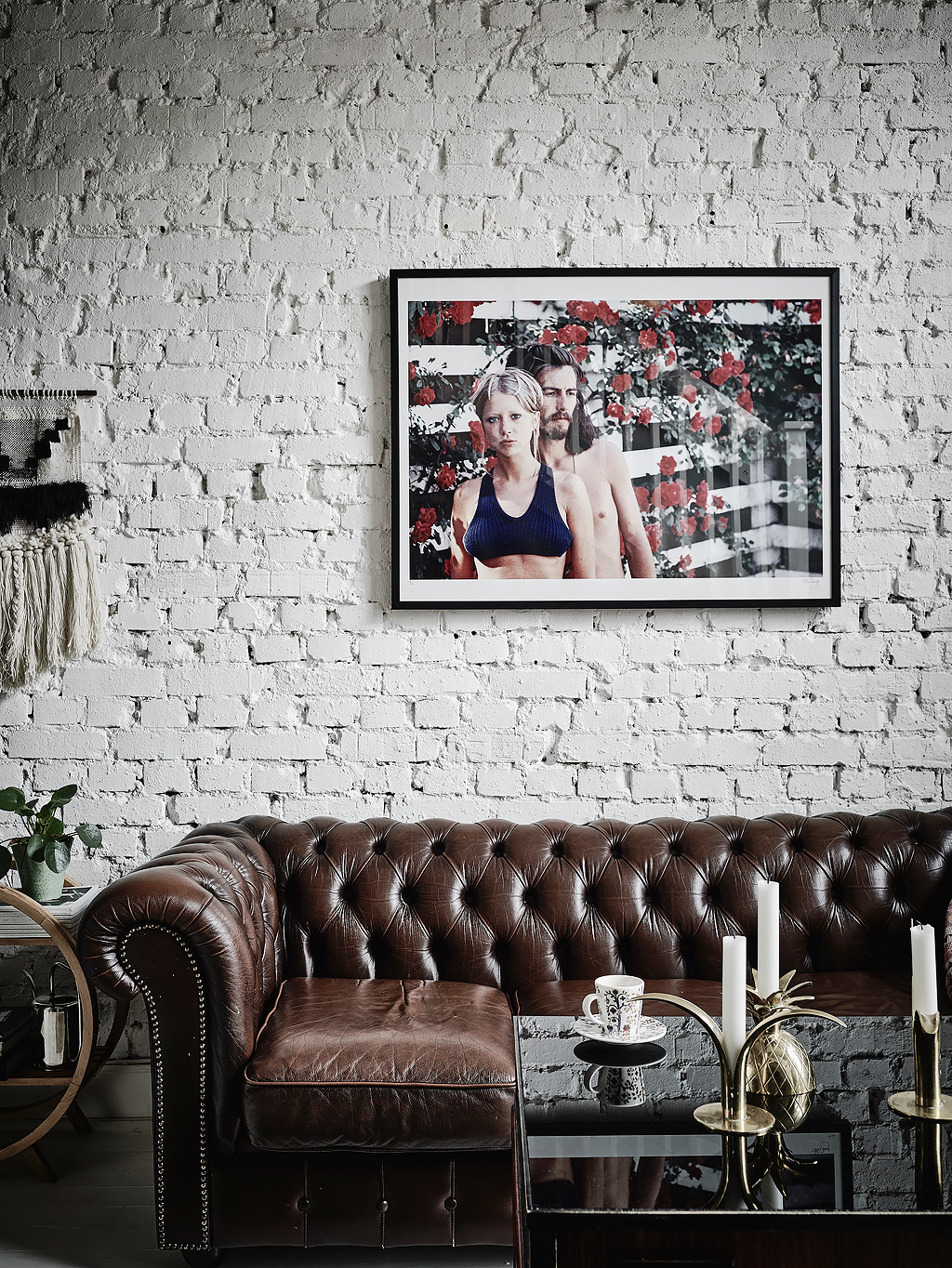 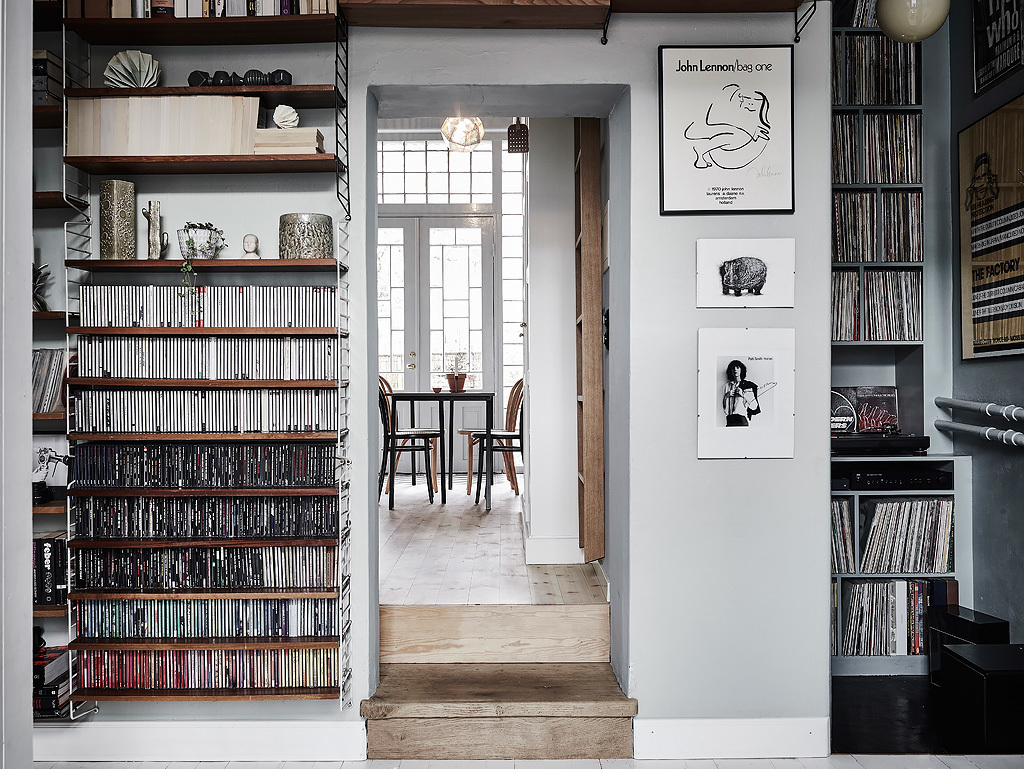 One detail I really like – which feels unexpected, perhaps, within a loft-style interior – is the William Morris wallpaper featured in the living space. I love this introduction of pattern and print, but would a contemporary design have looked the same here? This living space has been created and indeed crafted from a formerly industrial space. Perhaps a print that has its roots in the Arts & Crafts Movement is exactly right. 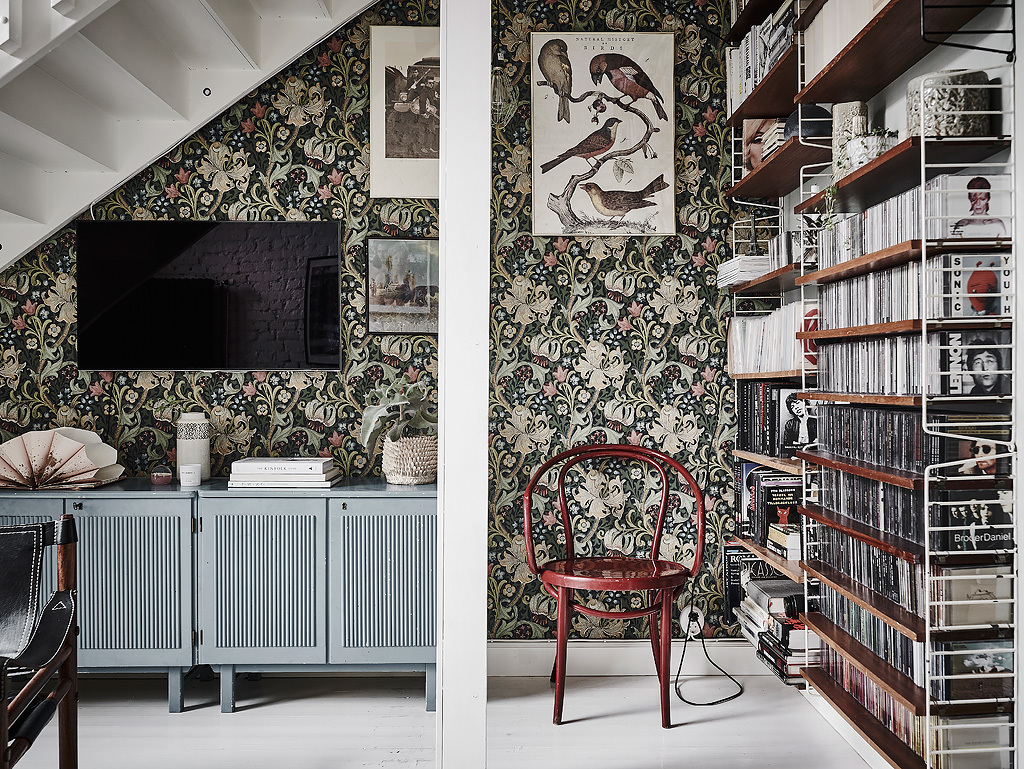 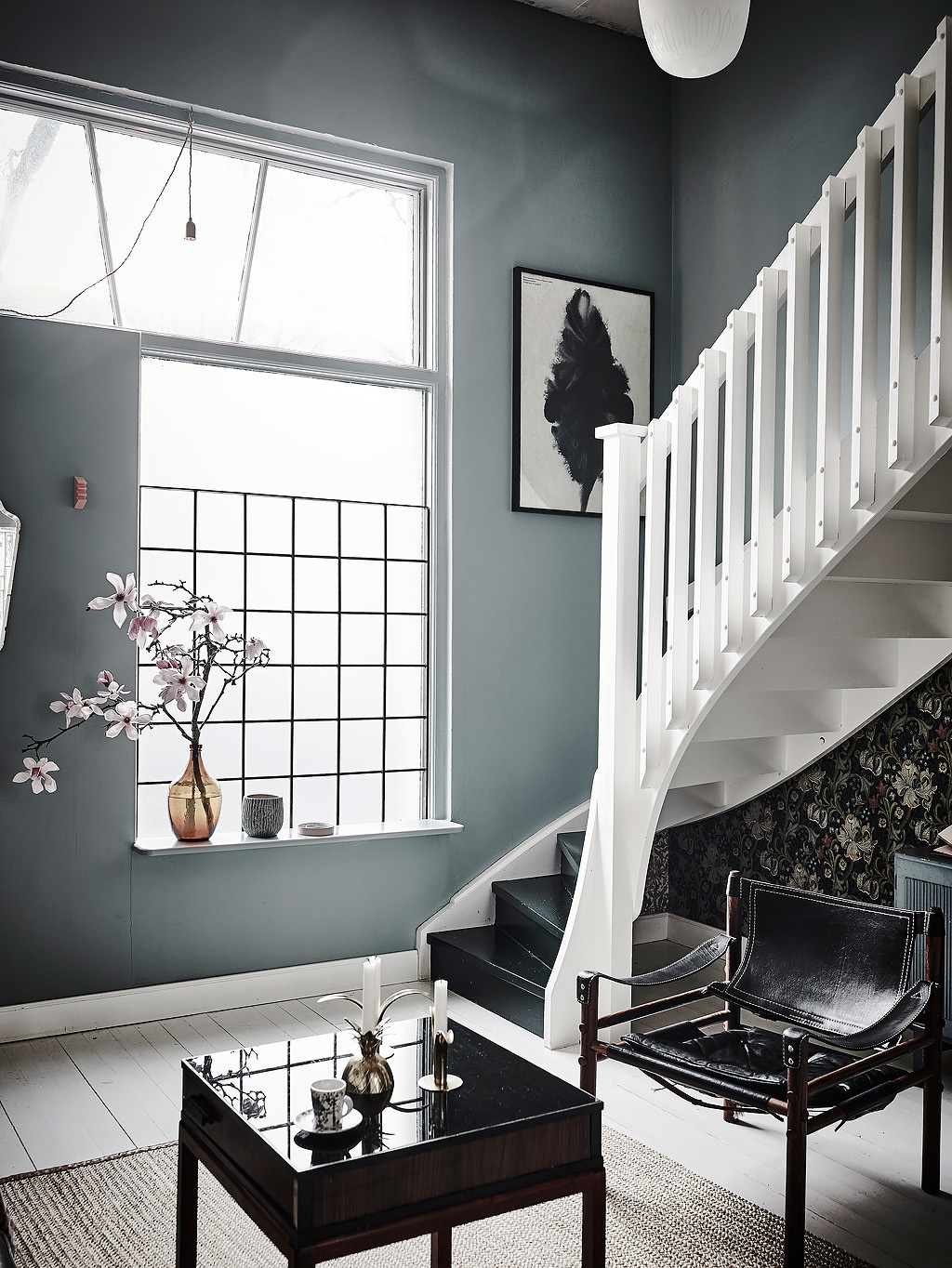 This aesthetic is continued upstairs where the east bedroom, which overlooks a courtyard, again features wallpaper by William Morris. 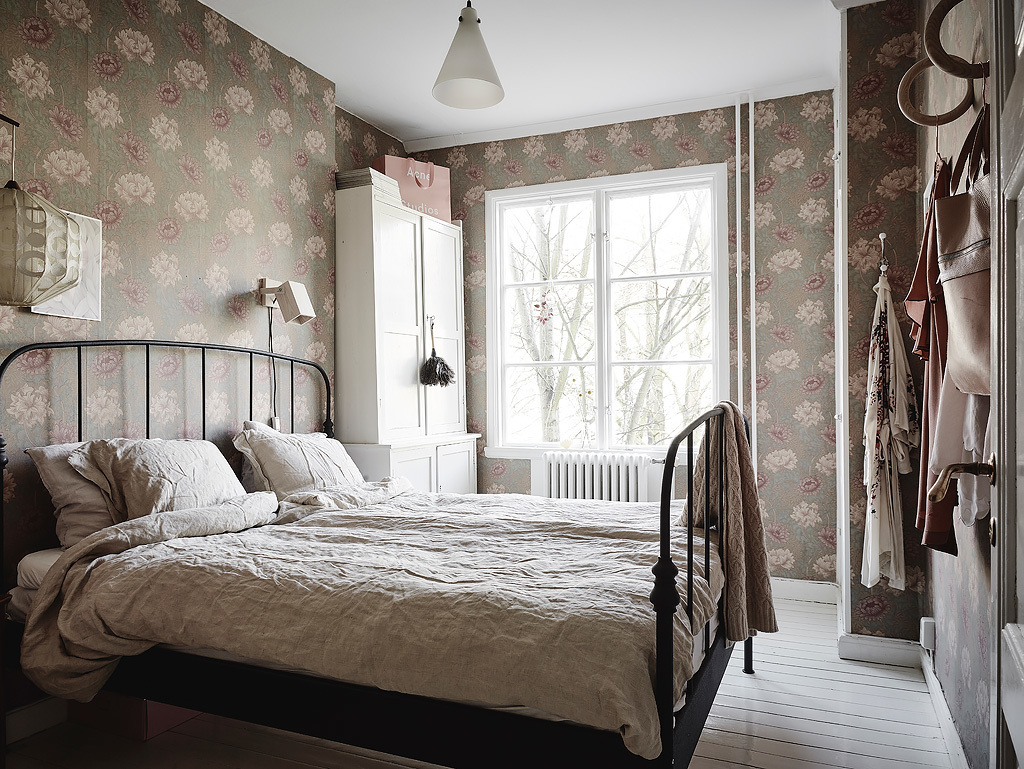 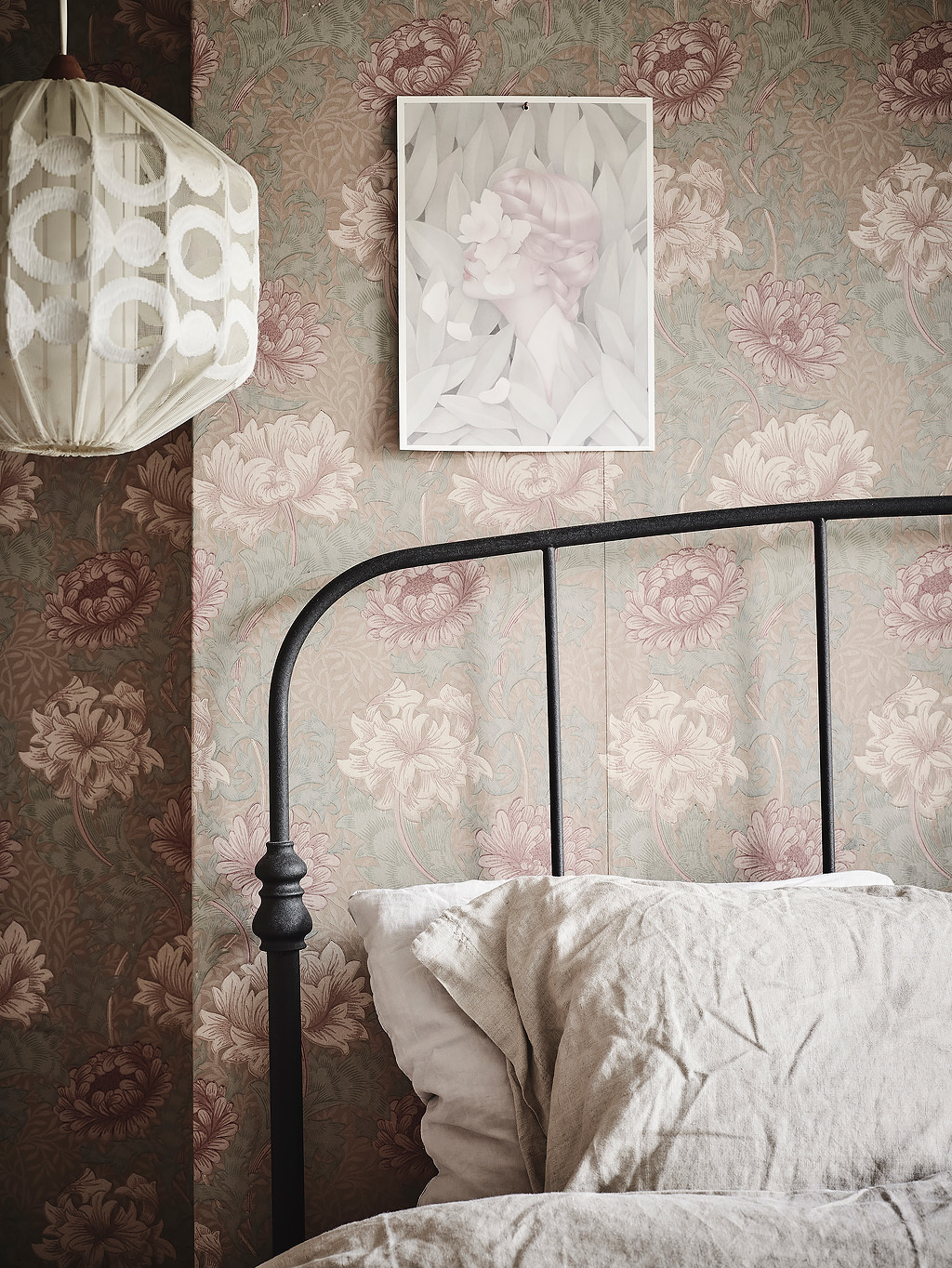 Last but not least, how about this for a great study nook? I particularly like this mellow shade of blue – a calming shade to work in. Celestial Blue, again from Little Greene, looks similar. There’s so much to admire and feel inspired by here, even if it’s just about the mix and being confident to throw in something unexpected. 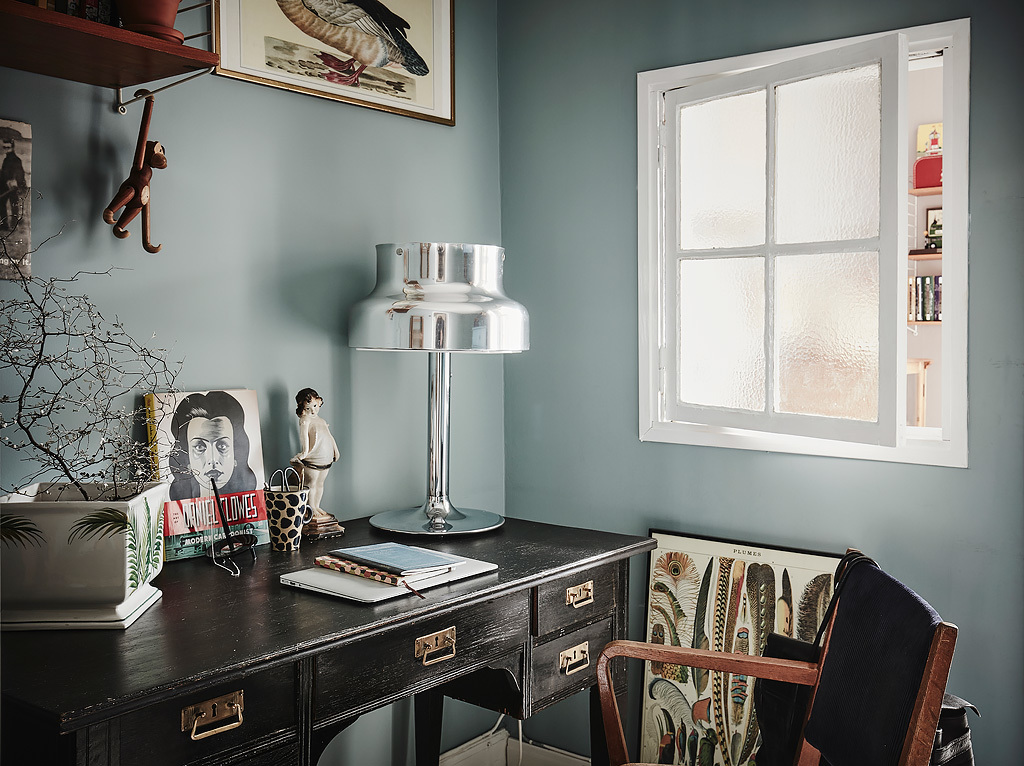 This property was marketed by Entrance Mäkleri and has now sold. All photography via the website; see more photos here.