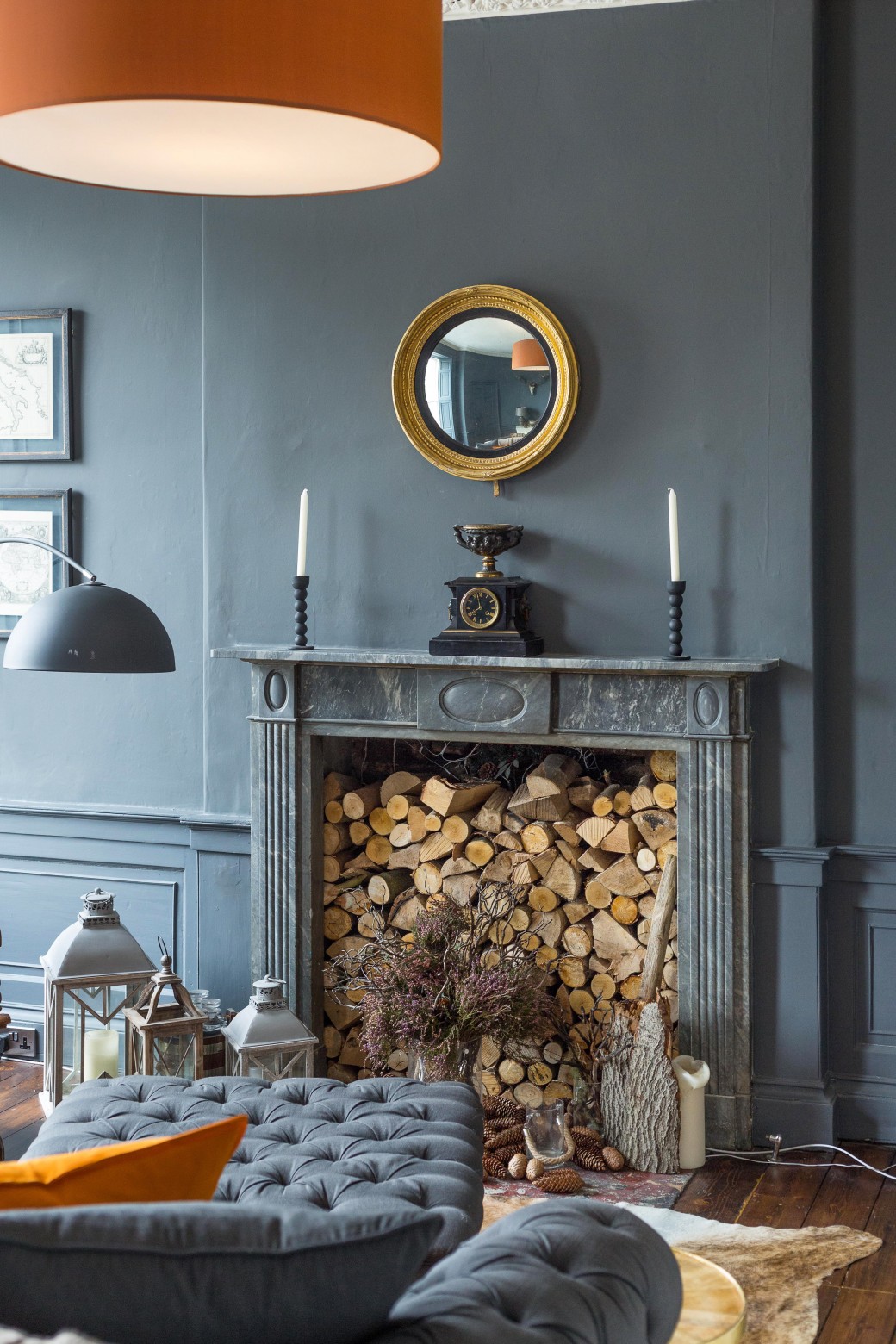 A few weeks ago I posted about an amazing flat in Edinburgh’s New Town, and I must admit that when I turned up to chat to the owner there and have a look round, I knew that this was a flat I could (very happily!) live in. There are just some places that you immediately connect with. And this happened again when I went to meet Stuart Holligan at this B listed Georgian flat on Broughton Place, again in the city’s New Town. I know this location well and have admired these bow-ended flats that sit on the corner of Broughton Place and Broughton Street, and also opposite on the corner of Barony Street and Broughton Street, for years. Needless to say, perhaps, it was a pleasure to finally see inside one. 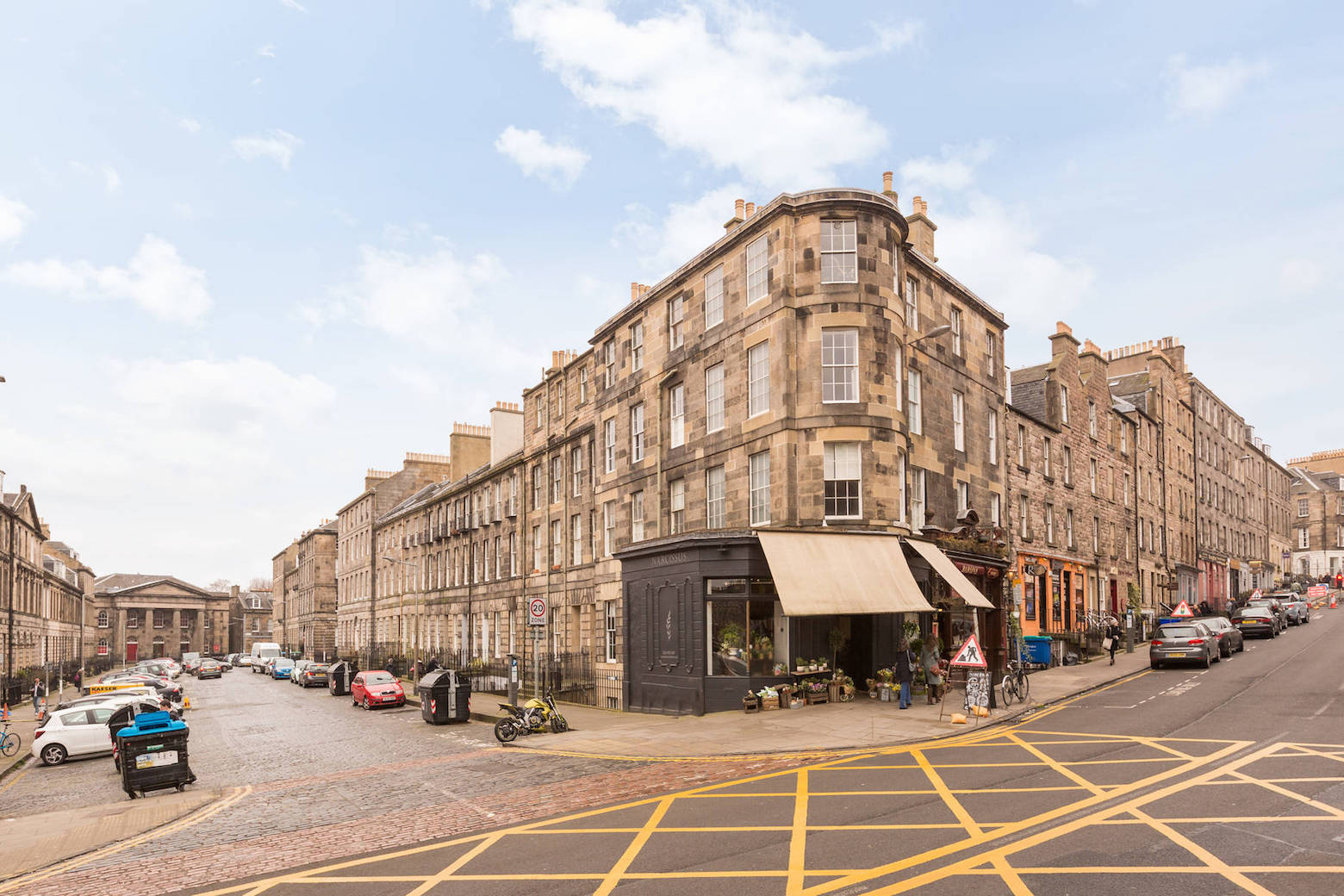 Stuart and his partner Asta Young-Smith moved here in September 2014. With Matas, 12, and Lucas and Marcus, who are now grown up, the couple needed a flexible family home. Stuart and Asta share a love of period architecture. “We never feel as if we own a property in the New Town,” Stuart reflects. “You’re a custodian of a property like this and you have to do your best for it.” Indeed, this flat is now under offer, having been marketed by Simpson & Marwick, as the couple are preparing to take on another venture and another period property. 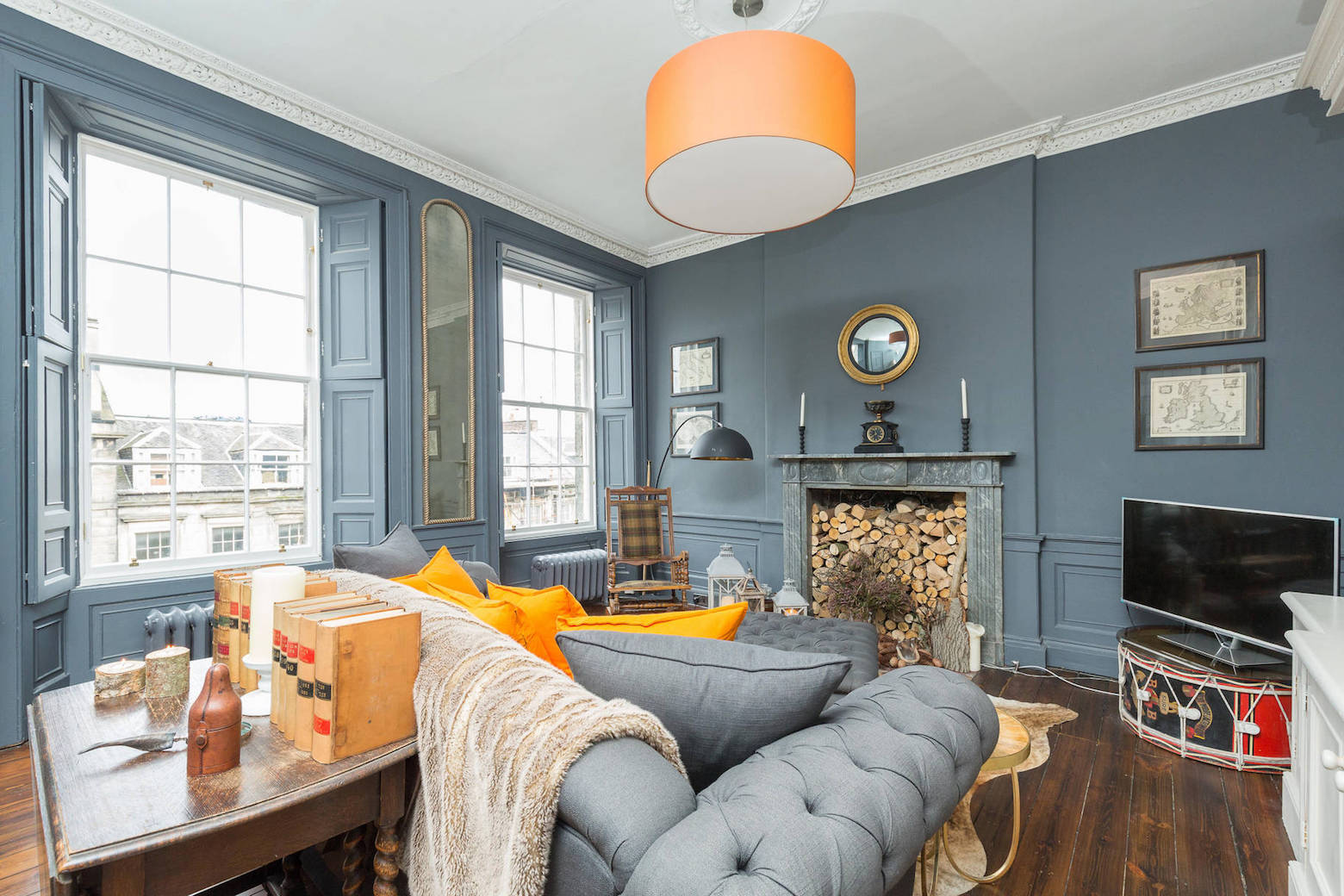 Décor aside, while the interior had retained its period features, some were in poor condition. Some of the original window shutters were hanging off, while others were in such bad condition that they were no longer on the windows and parts of the timber on the windows had started to rot. Every room needed to be completely overhauled along with new electrics and plumbing and a new central heating system. 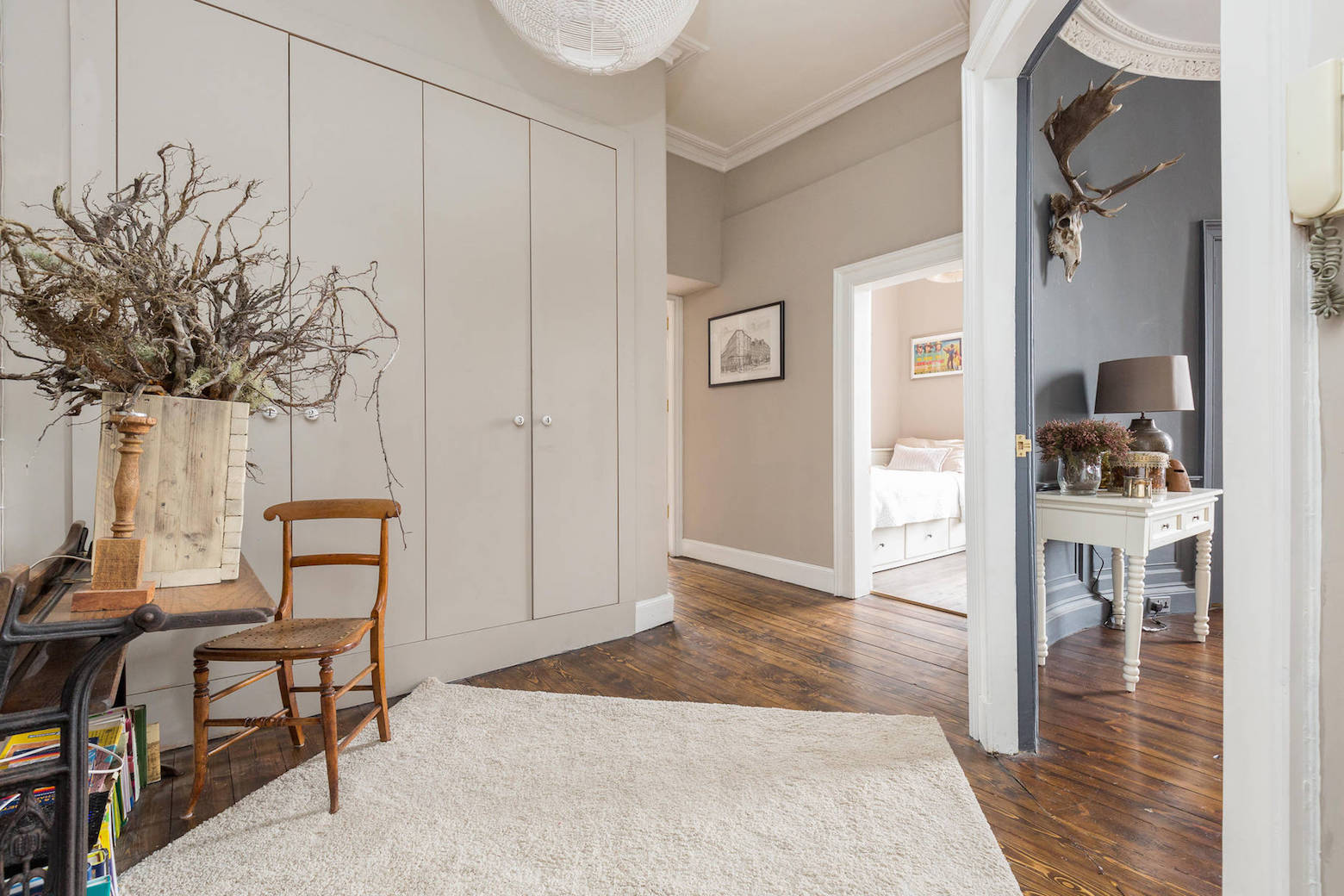 Thankfully Stuart and Asta relish a refurbishment project. Asta is a designer with the Edinburgh kitchen and bathroom design studio Development Direct while Stuart originally trained as a landscape gardener before working as a project manager for a large joinery firm. He left that job in December to set up his own business tackling restoration and refurbishment projects, so it’s little surprise to discover that Asta and Stuart’s own home has been so meticulously refurbished and redesigned.

“The first day we moved in, I came home from work at night and Asta had already lifted all the carpets. They were so bad, she wasn’t going to live with them for a day!” Stuart recalls. The couple started the redesign in the bow-ended living room. The windows were overhauled and the shutters were repaired and reinstated, and the painted tiles were stripped out of the original marble fireplace. 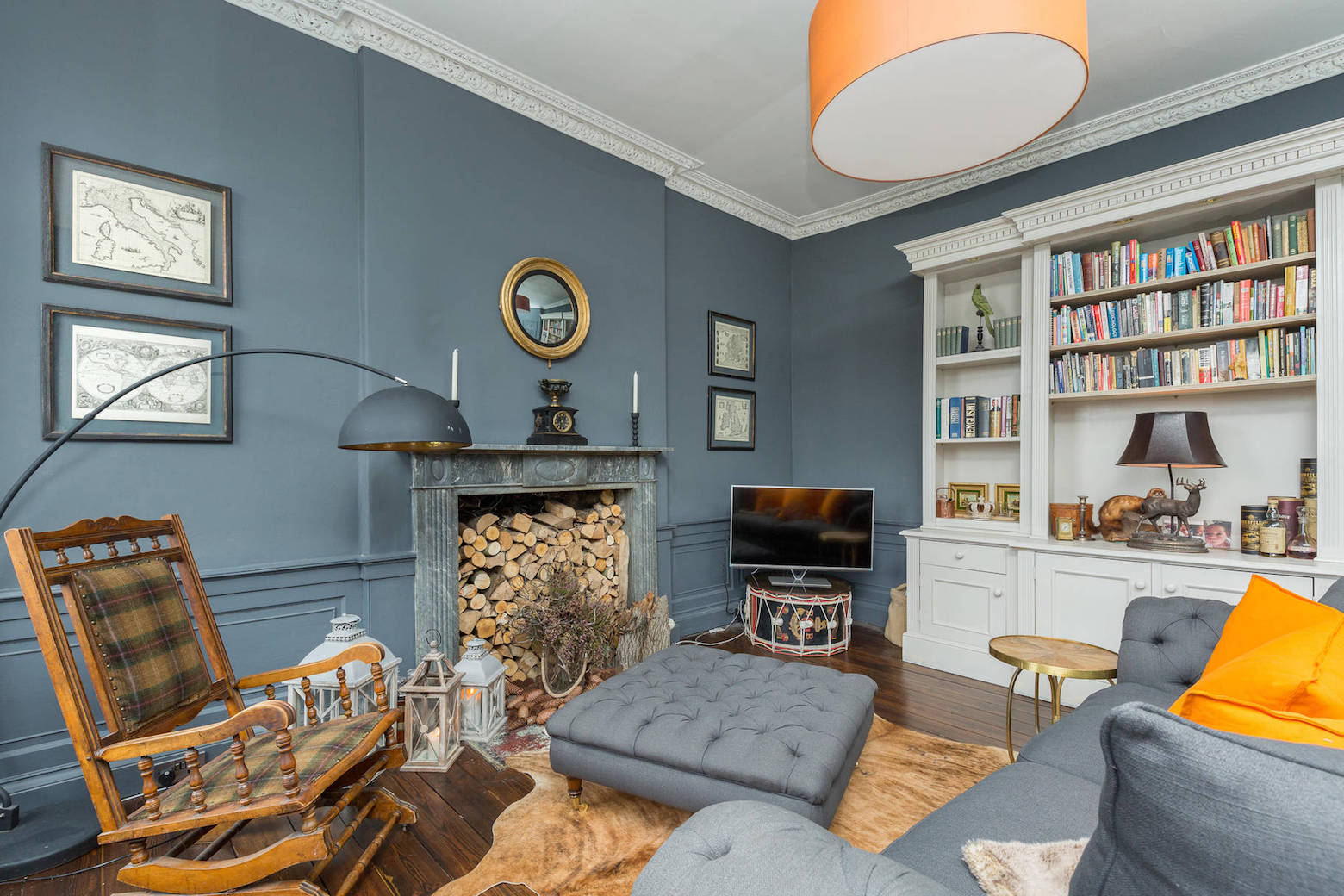 Aside from the period features, the striking thing about this room is the wall colour as Asta and Stuart chose a moody dark grey for the walls and woodwork, including the curved panelled doors – this colour can look even darker than it does in these beautiful photos from Square Foot Media as it’s one of those hues that constantly changes in the light. It’s the perfect complement to the marble surround – “This grey marble really didn’t suit the magnolia,” Stuart says – and the colour also offsets the warm tones of the original timber flooring, which was stripped, sealed and stained.

“We love grey,” Stuart says. “We’d originally thought about using this dark grey in the hallway, but we painted this room first and then decided to use a lighter shade in the hall that would complement it. Asta has a great eye for colour. This living room is big, so sometimes it’s about having the courage to make a space feel a bit smaller with colour, as it has to feel cosy too.” 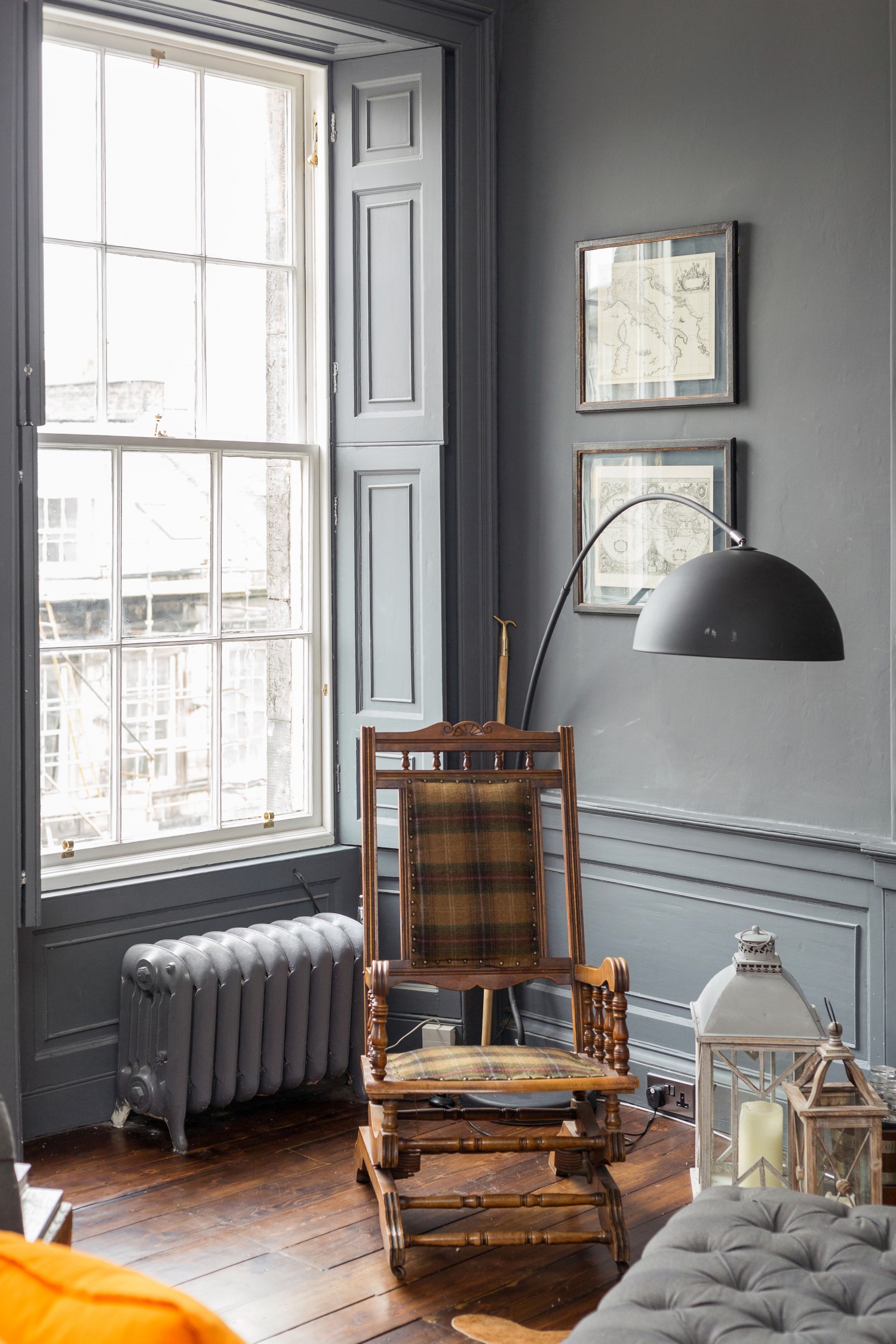 The rich grey is continued into the furnishings and is complemented by the tones of the antique and vintage wooden pieces, and by the orange accents. “We see things we like, and then figure out how to use them,” Stuart says. “If we like something, we know it’ll work somewhere.”

This approach is evident throughout in the mix of old with new. In the hallway, for example, the couple found the wall sconces when the flat was still a building site, but they had the vision to see how these pieces would look here. Likewise, Stuart picked up the oil portraits hanging in the hallway from an auction in Dundee. They were just £50 each – cheaper than many off-the-shelf prints – yet they have such a presence in this space. It’s about having a good eye, yes, but it’s also about having the confidence to just go with an idea. 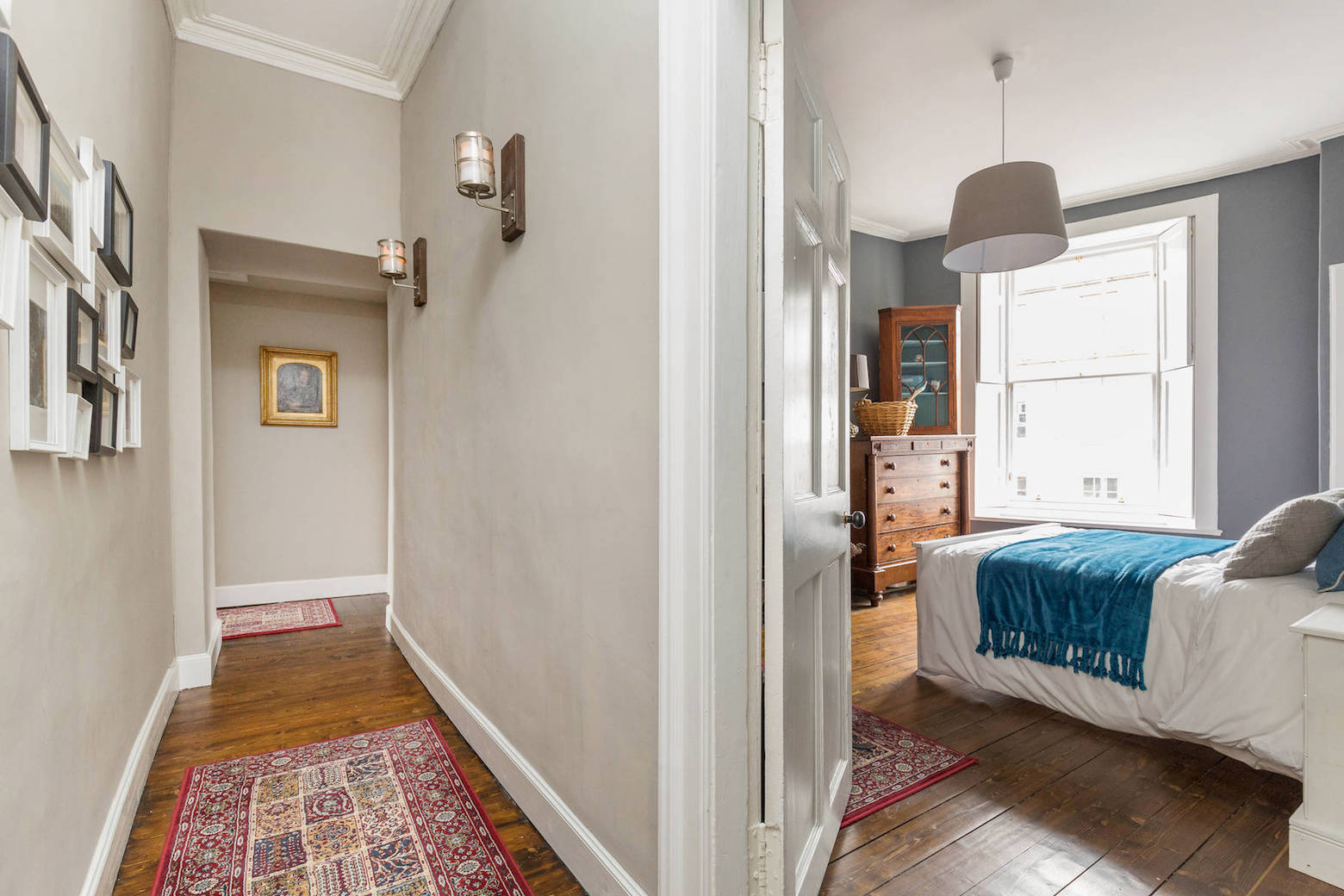 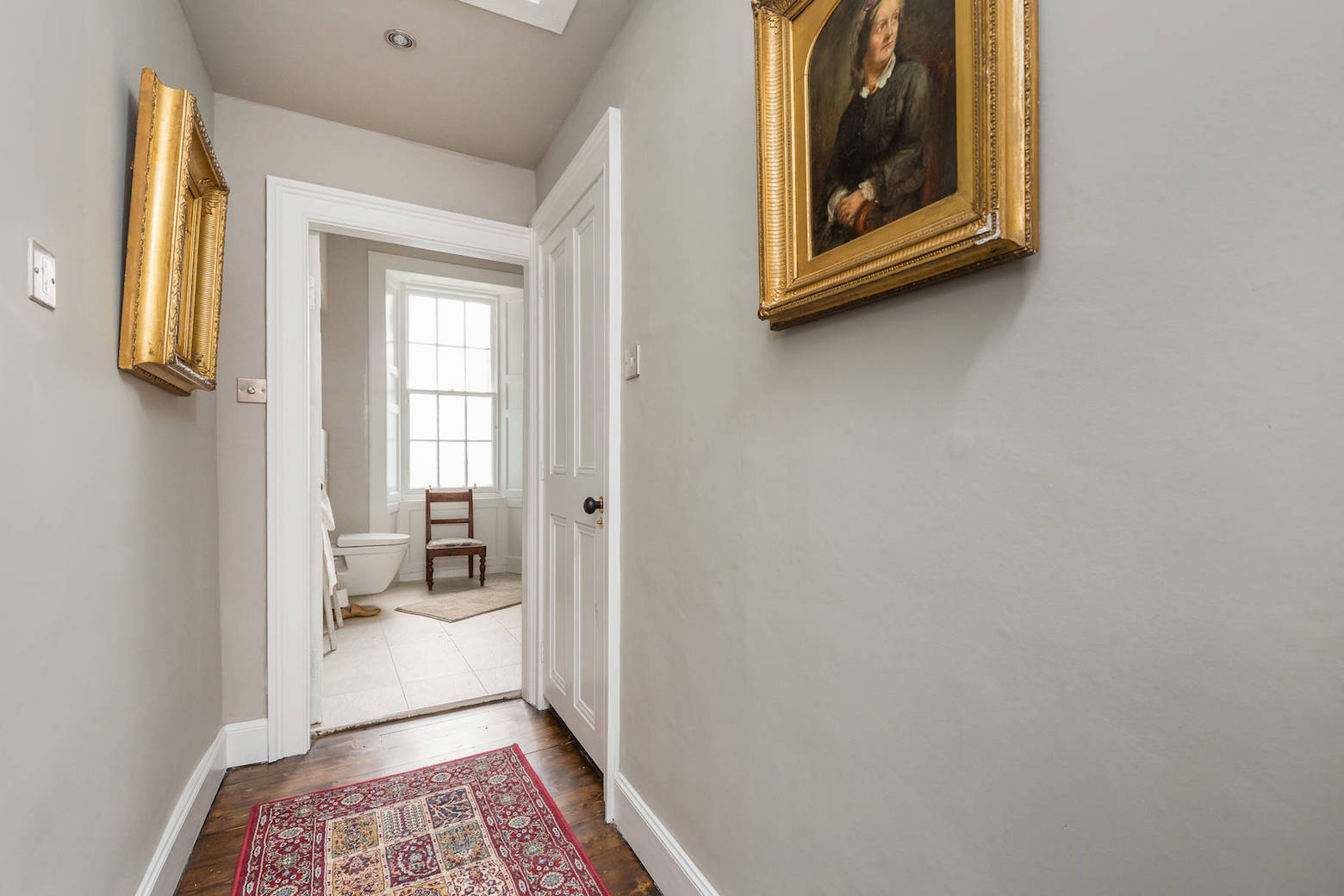 The kitchens and bathrooms in this flat are just beautiful. When designing the kitchen, Asta took her cue from the colour of the living room and carried the dark grey into the sleek cabinetry featured here, combining Hacker German furniture with Silestone Quartz work tops. Development Direct’s creative director, Colin Wong, was also on hand to advise on the design. “I wanted to have a handleless style kitchen which can help to create a clutter free look, making it the best choice for small kitchens where space is at a premium,” Asta says.

Again Stuart mixed up the style by adding in older pieces, like the vintage scales and the rustic table, which he made for this space, combined with bentwood chairs. “We actually filled the space up, and then scaled it all back to mix the contemporary style with a few old pieces. Without those, this space feel too modern against the rest of the flat,” Stuart reflects. 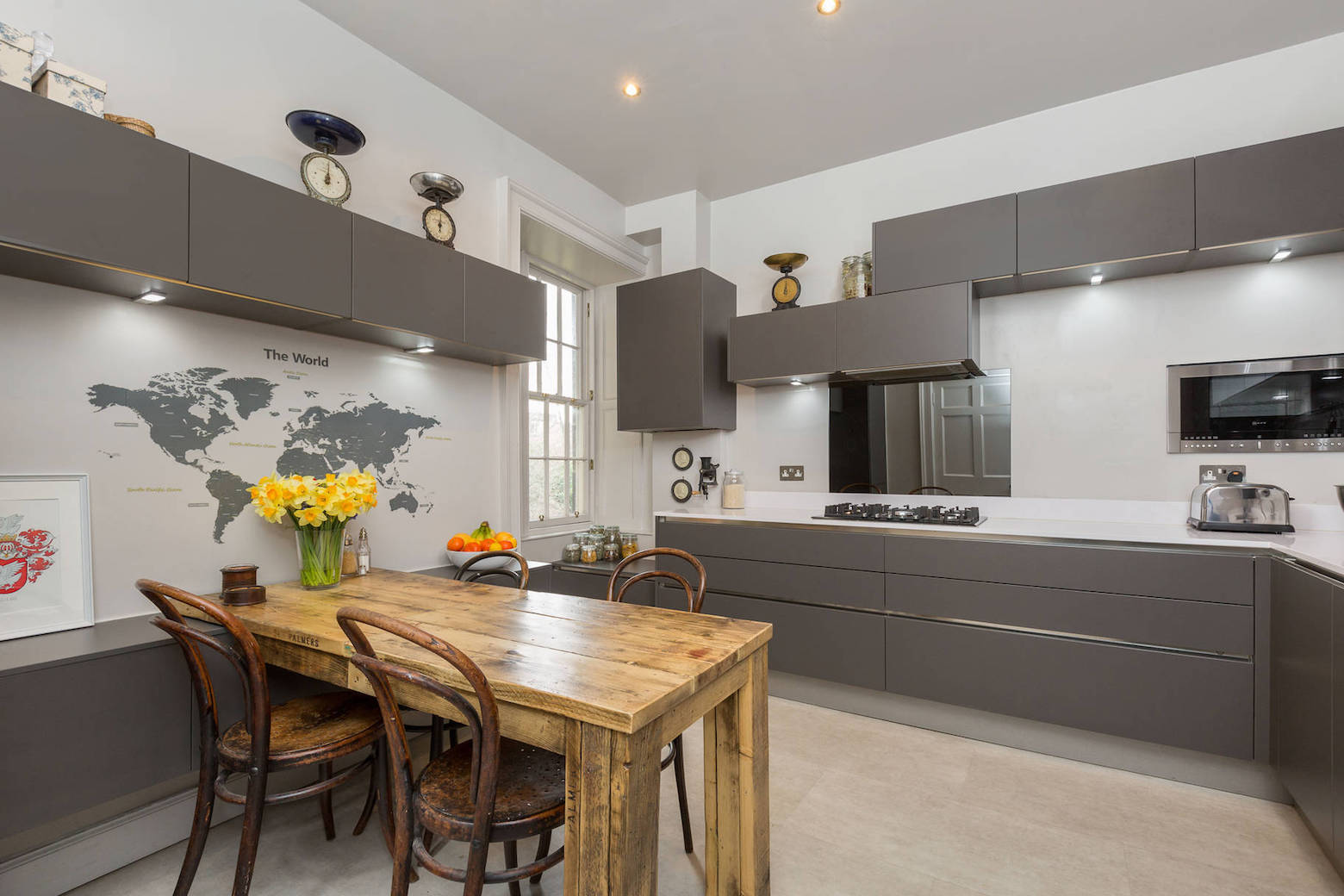 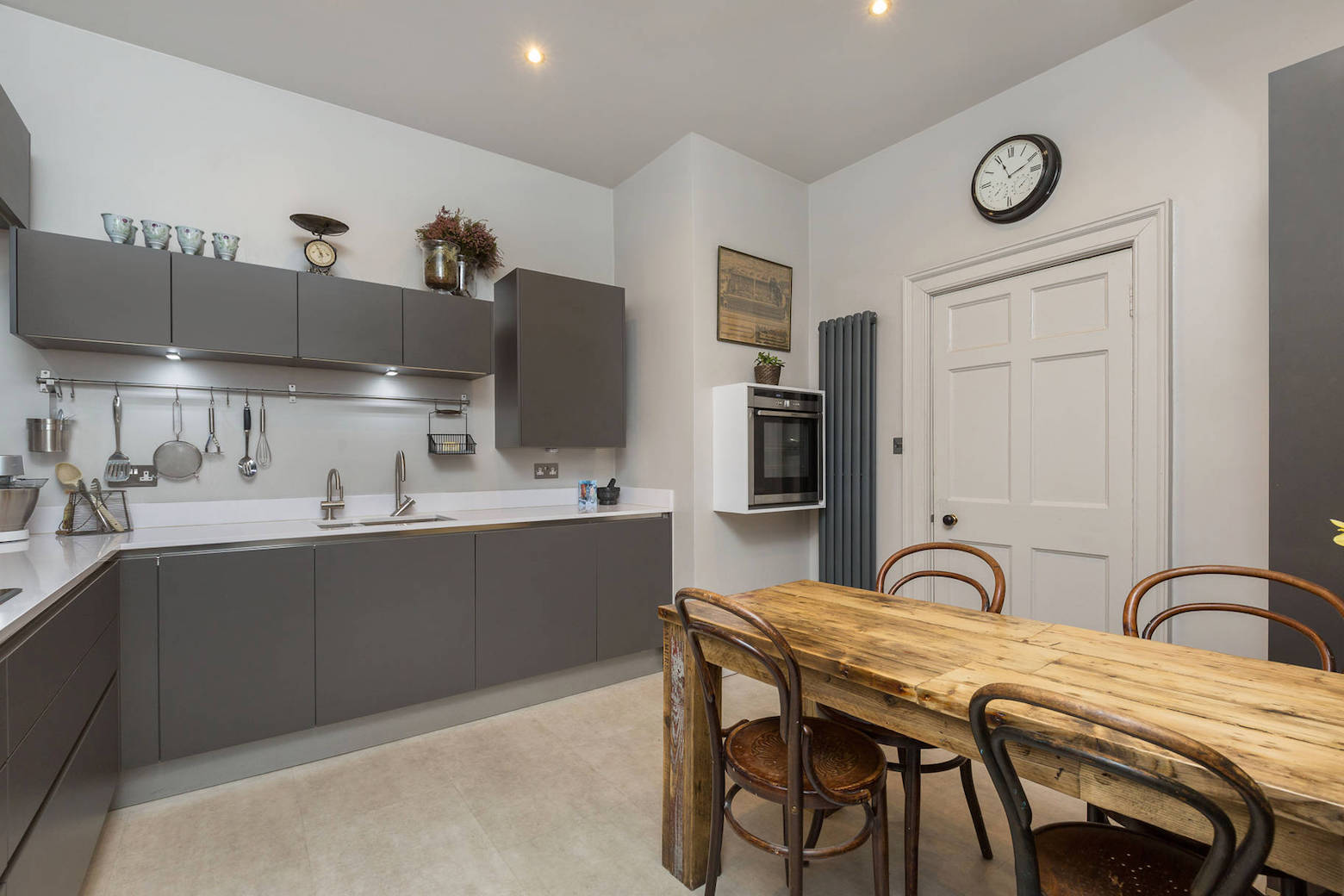 The master en-suite was created from scratch. Previously there had been an archway between this bedroom and an adjoining space, and Stuart removed this and reinstated the doorway and period architraving – although you would never realize that this wasn’t original. The couple created a generous shower room with large profile porcelain tiles – from Development Direct, as throughout – and the main bathroom echoes this en-suite with its neutral palette of tiling and contemporary Vitra fittings. 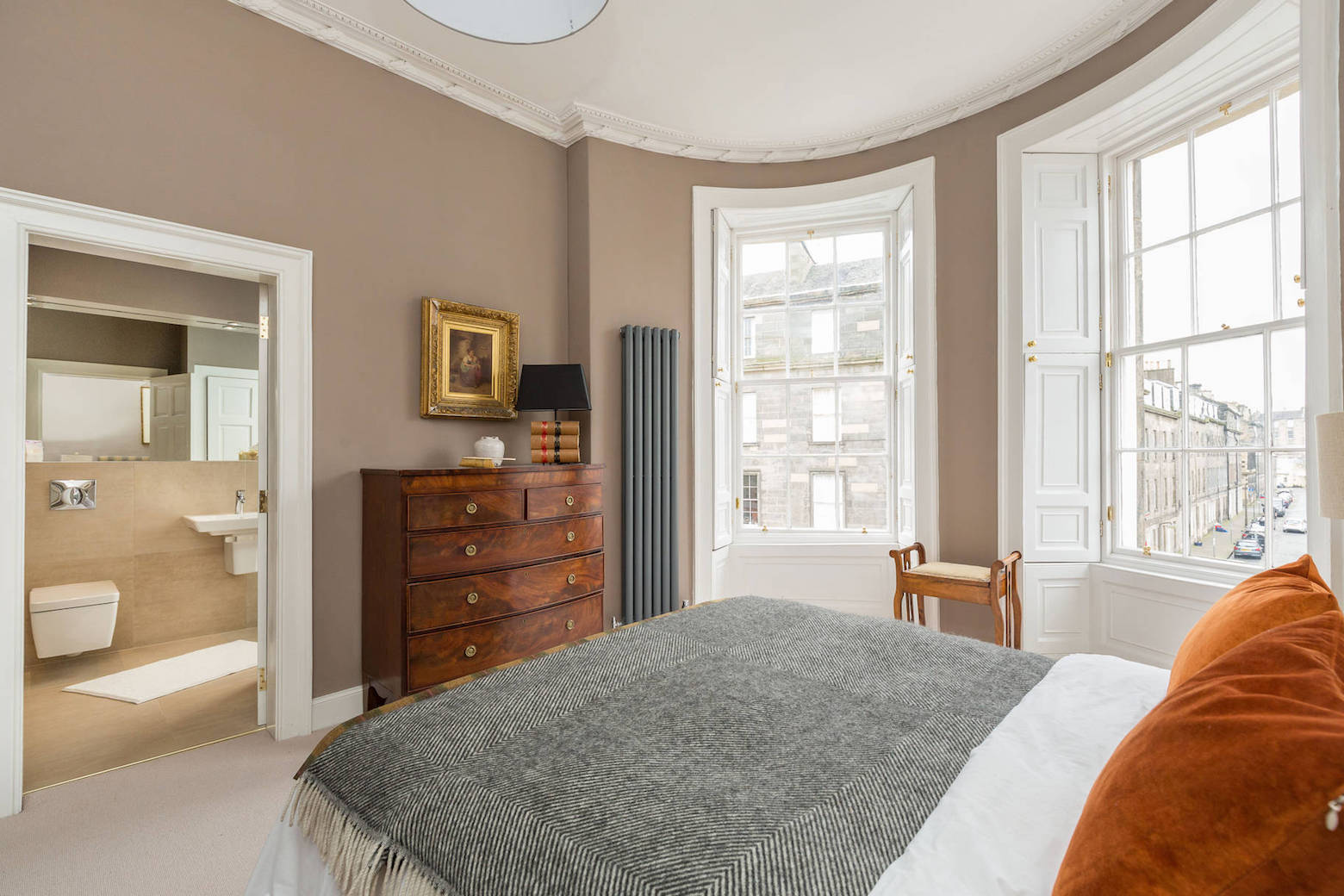 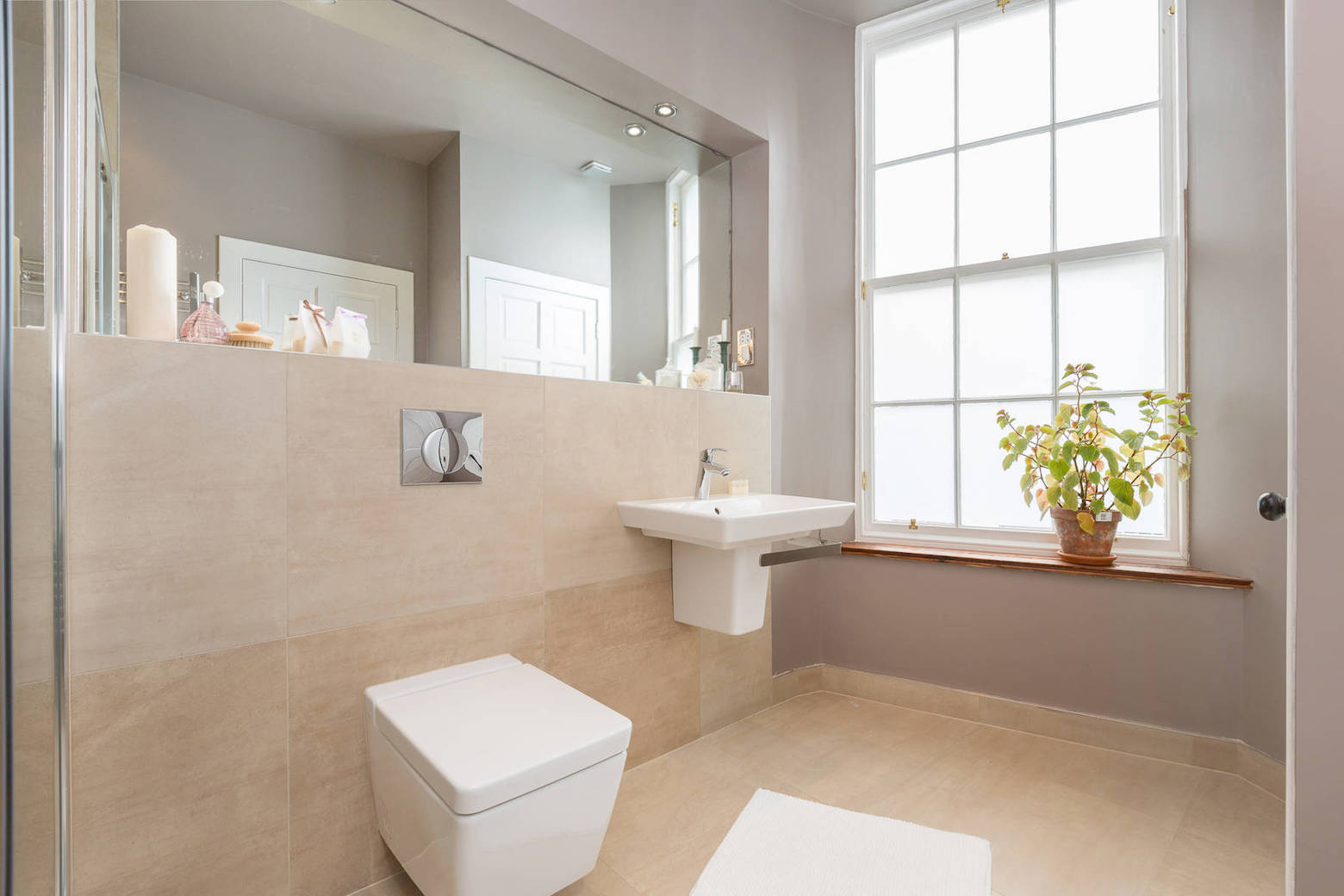 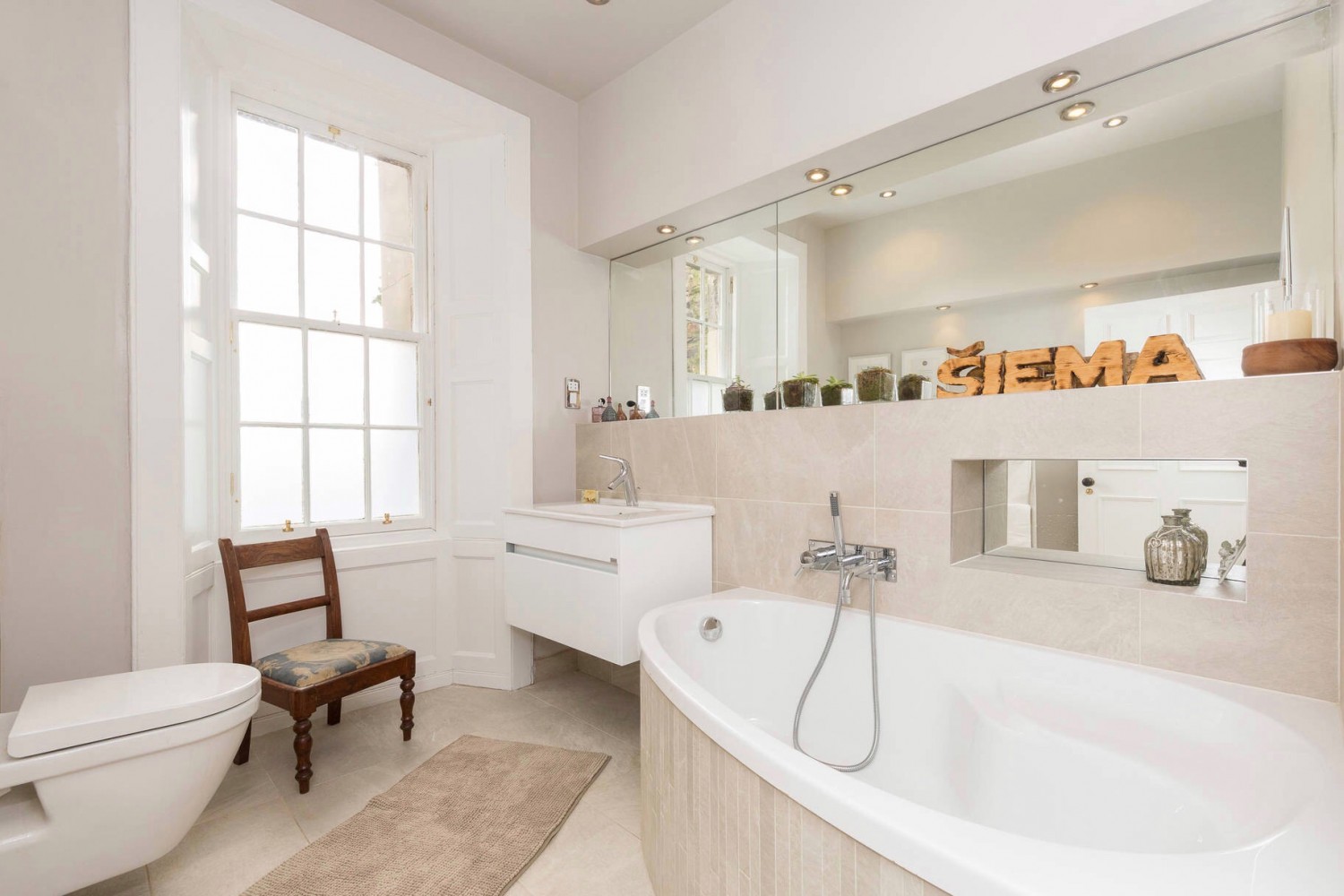 Throughout this interior there’s a sense of ‘Scottishness’, from the fabrics used – Asta designed the tweed upholstered headboard in the master bedroom – to the bunches of heather displayed in vases and picked from the Lammermuir Hills. Stuart isn’t averse to filling his car with tree branches, as he did for the logs that fill the fireplace, or tree roots, as he did to create the display in the hallway, all adding to the character of this living space while giving this interior a relaxed, easy feel. 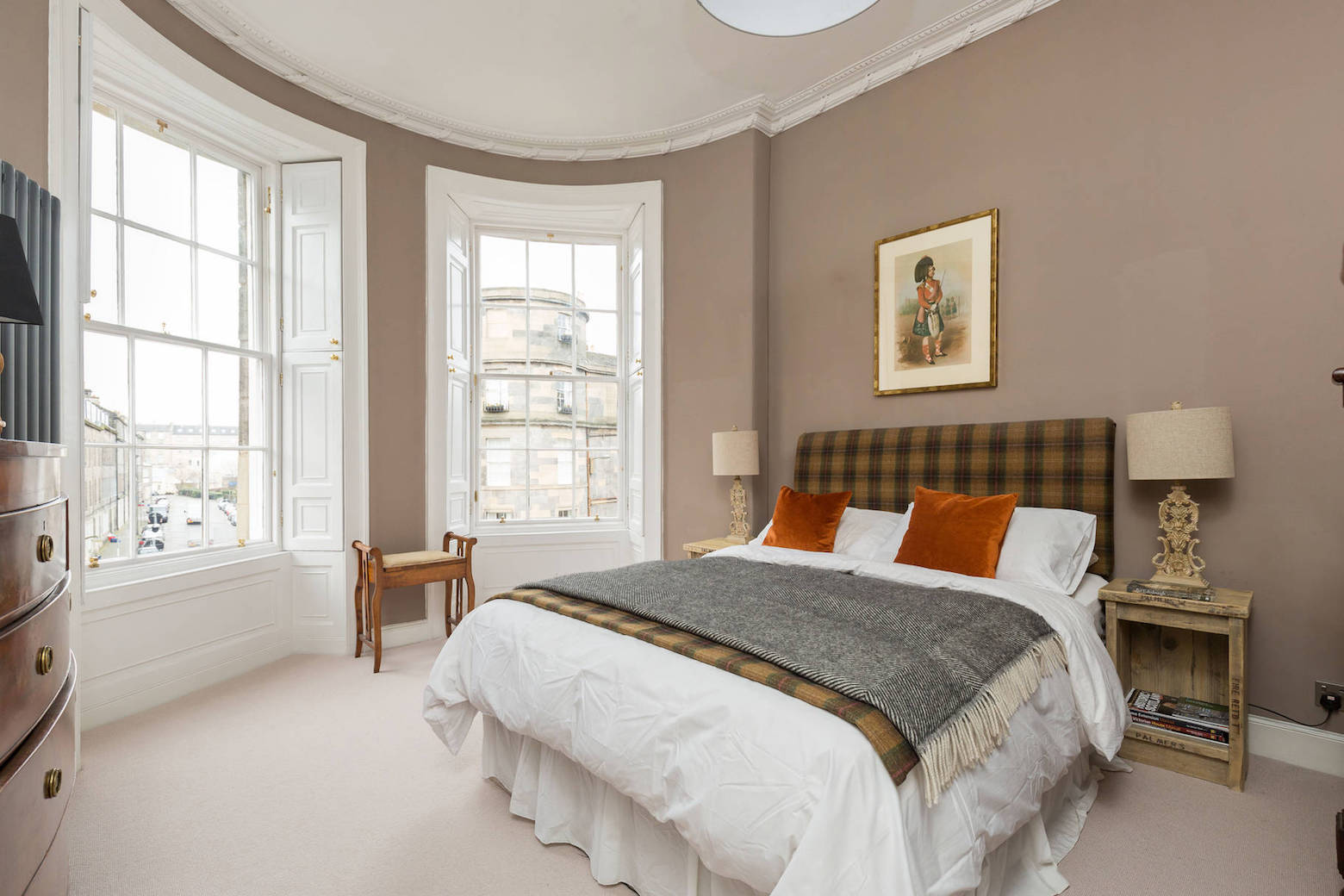 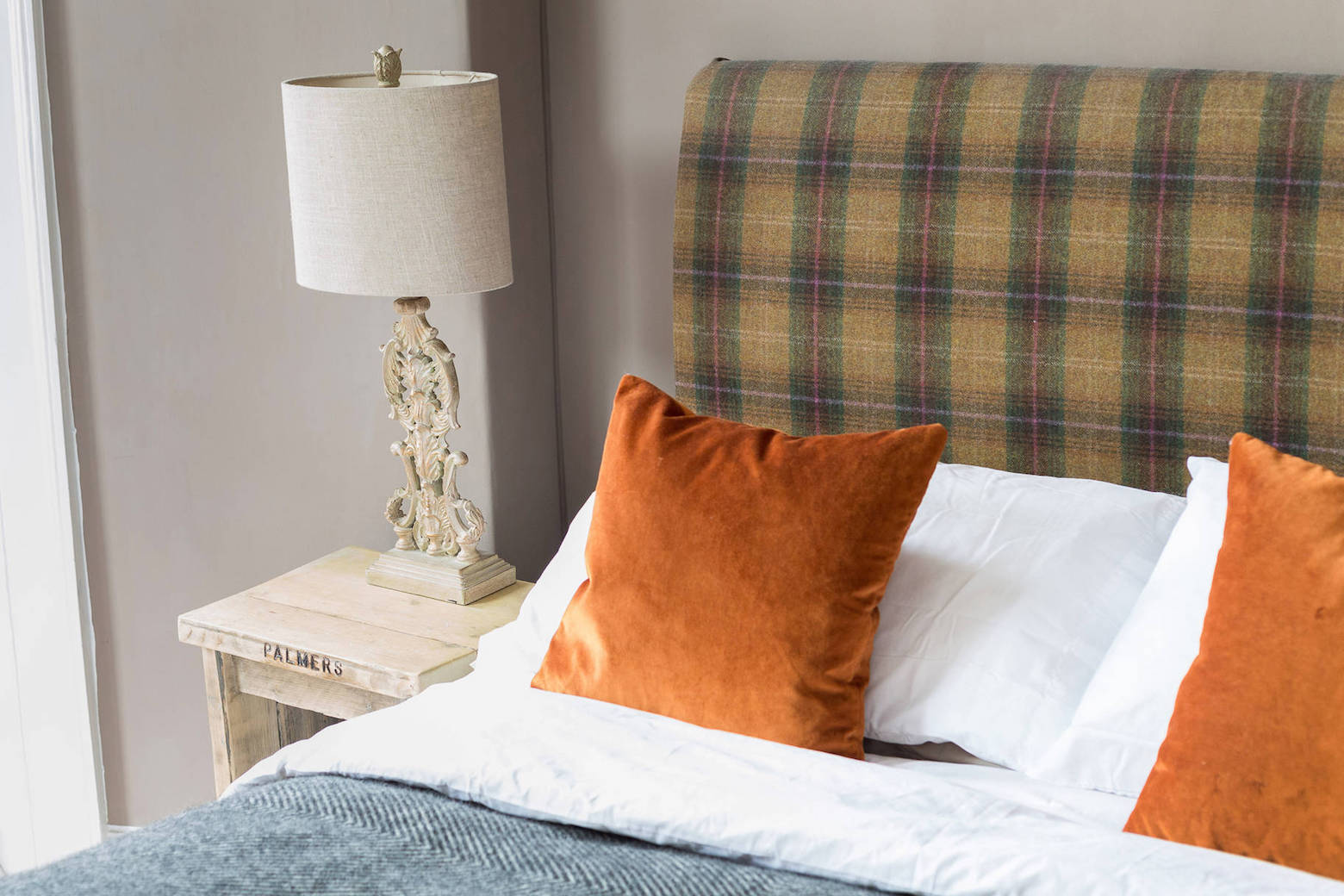 This interior has taken vision and commitment. Before selling, Stuart spent three months working on the finishing touches. As he says: “It wasn’t about making the property more valuable. It was about quality; it was about getting this flat to the level of where we wanted it to be, and doing what was right for the property.” 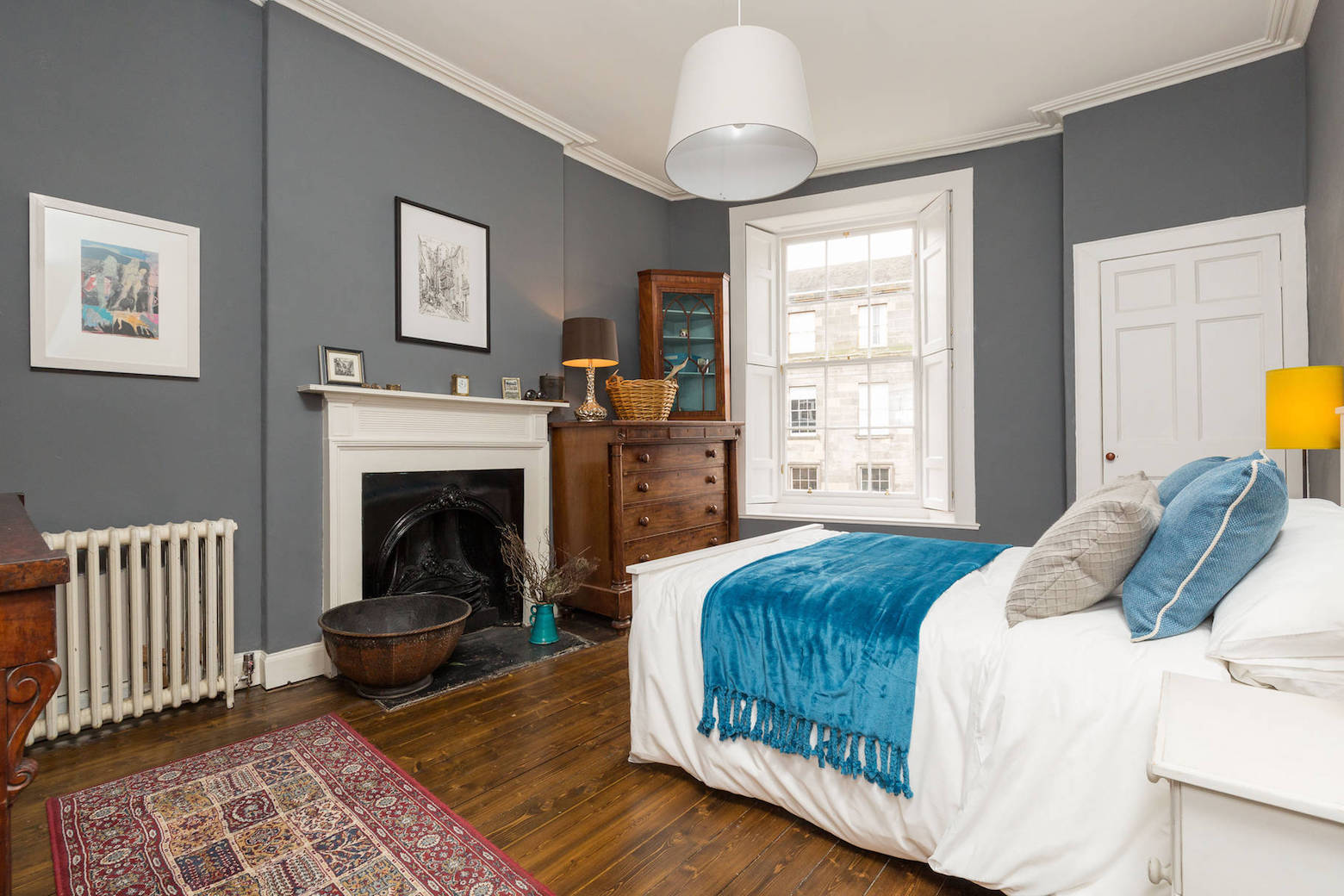 This property was marketed by Simpson & Marwick and is now under offer. All  photography by Square Foot Media.