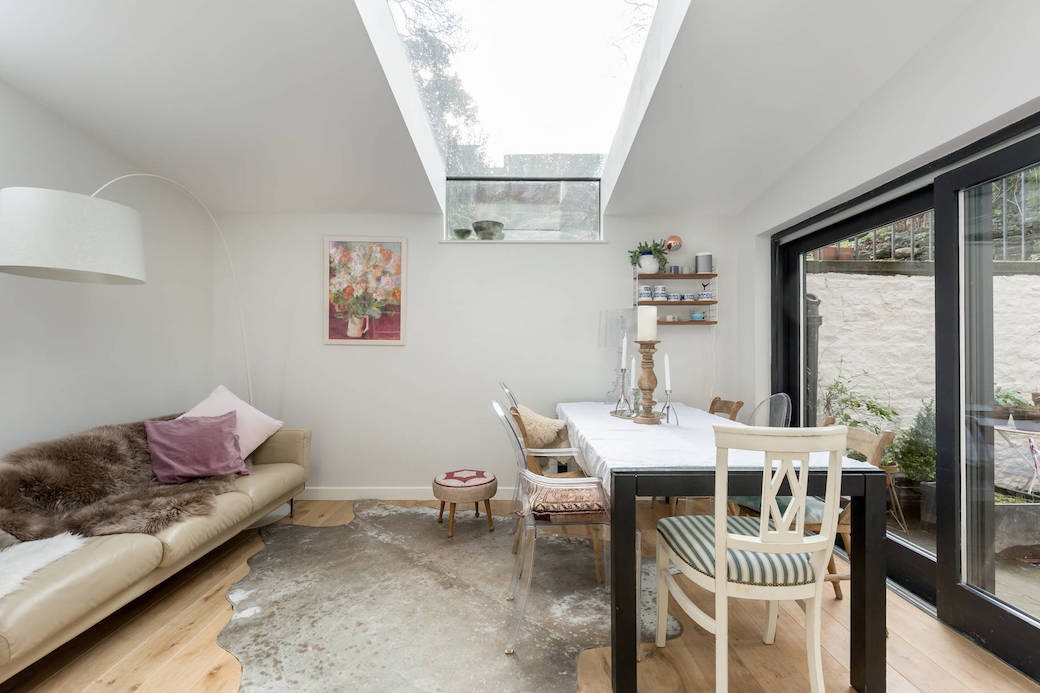 “We wanted to be in the New Town, and particularly this end of the New Town close to Broughton Street, and we wanted to have a garden for the kids and a bit more space for us,” says Anna Brocklehurst as she recalls her wish-list when property hunting in Edinburgh with husband Richard in the summer of 2013. The couple and their two young sons, Max and Freddie – since joined by 6-week-old Arthur – had been living in a flat in the city’s Bonnington area after moving north from London five years ago. Anna had studied in Edinburgh and also has family here, so she had a good feel for locations. 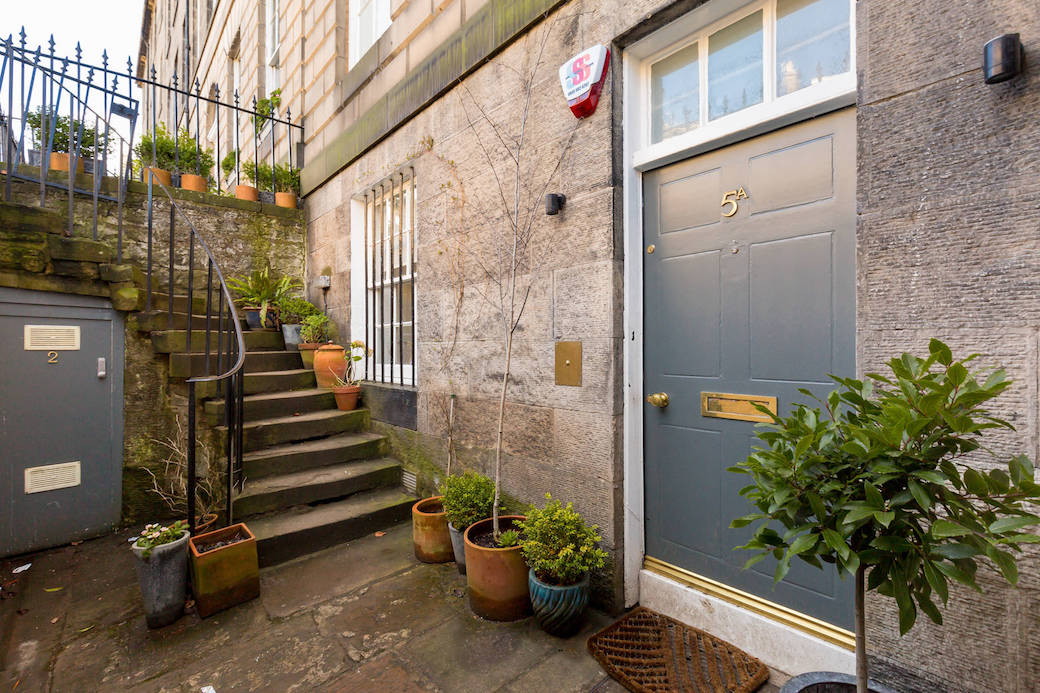 New Town garden flats can be hard to find, especially if you’re looking for a generous garden, as many city centre garden flats by their nature tend to have compact external spaces. So the couple knew they had found their ideal home when they came to see this two bedroom main door property on Abercromby Place – which is now under offer having been marketed by Simpson & Marwick, with photography by Square Foot Media. There’s a patio area to the front of the flat, but move to the rear of this Georgian building and you’ll discover a south-facing terraced walled garden – which the couple redesigned. 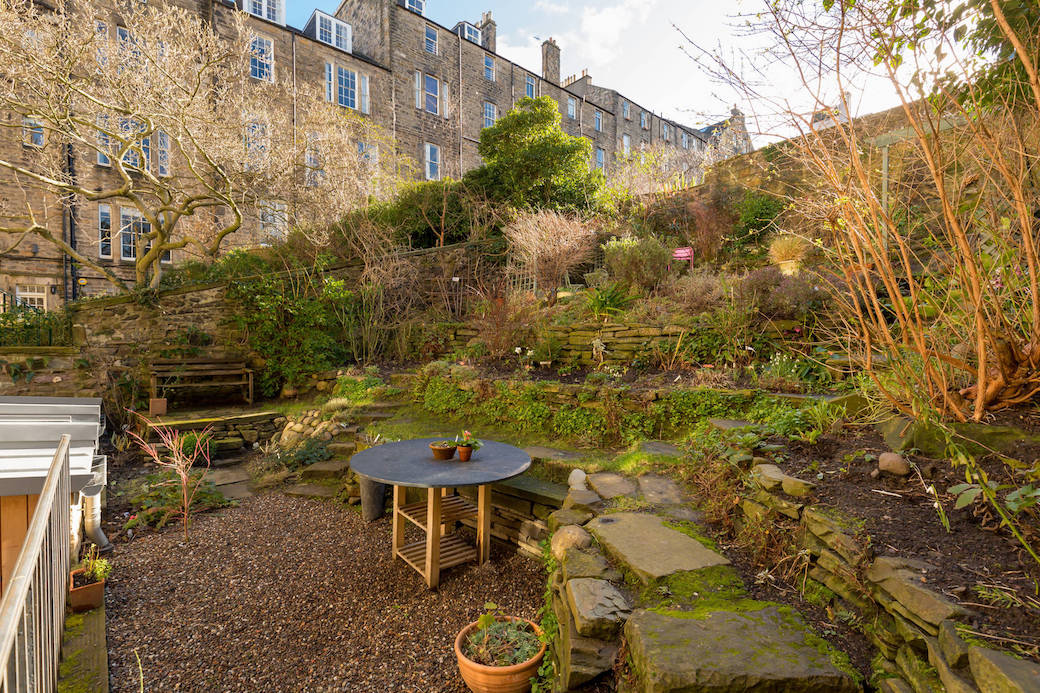 While the interior of the flat was in good condition, Anna and Richard had their own ideas for the space both in terms of decor – Anna used Farrow & Ball shades throughout – and particularly when considering the rear of the flat. “We liked the flat as it was, but we had the idea of extending when we bought the place,” Anna explains. “There was a lean-to at the back but it was very small – really too small to sit in.”

Although the open plan kitchen, dining and adjoining living space were already here, the couple have altered the kitchen, and have transformed this area by adding the new garden room extension. 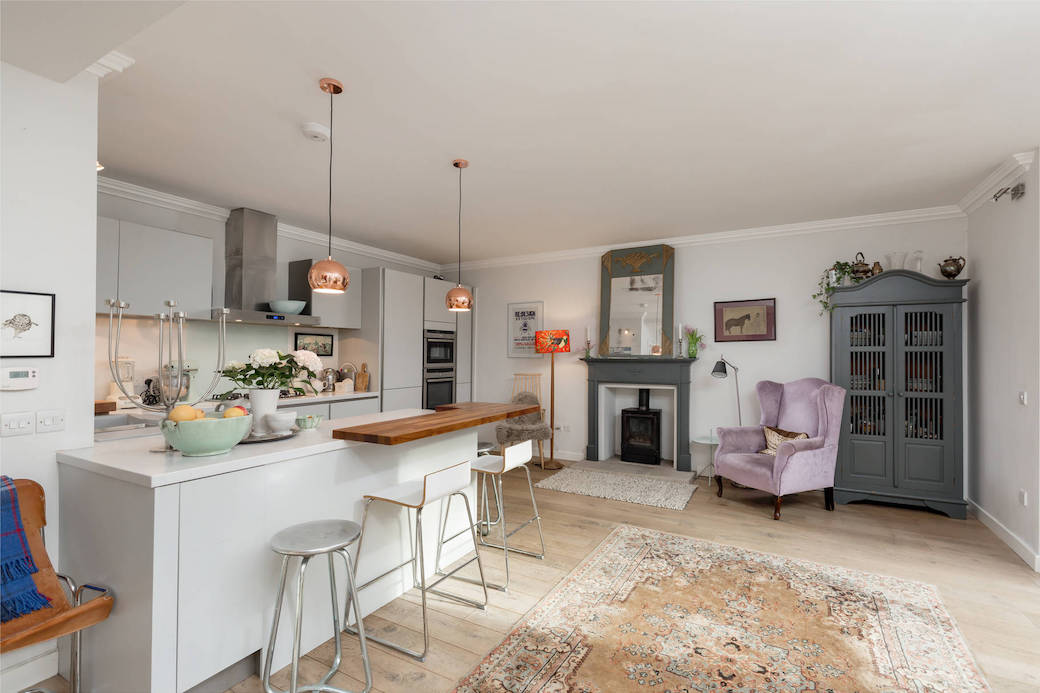 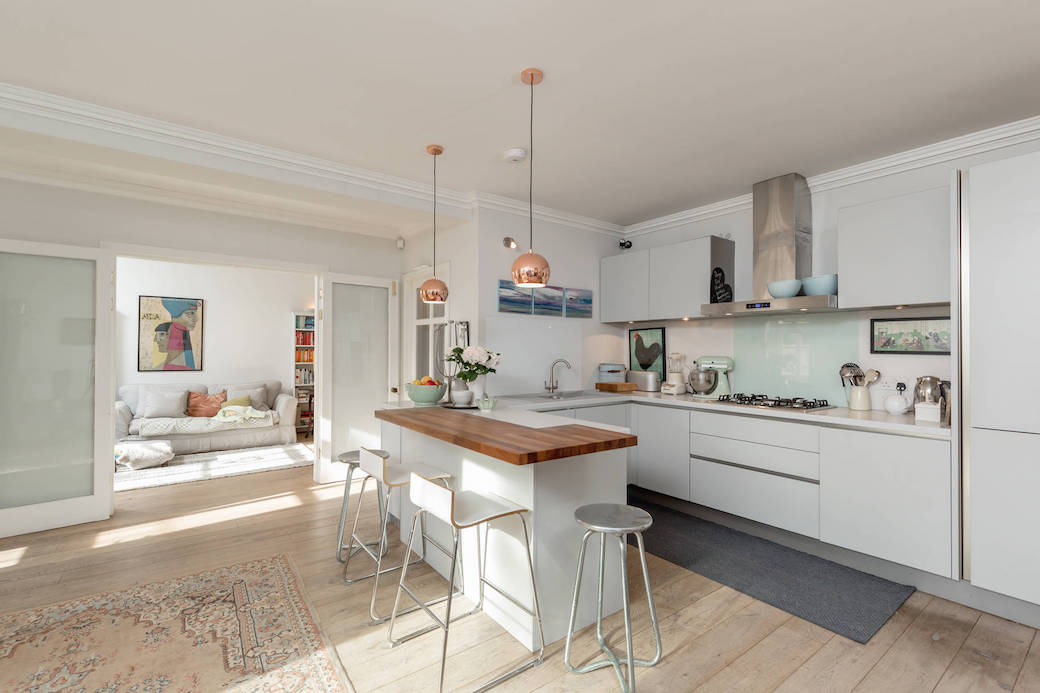 “We weren’t sure that an extension would be allowed given the strict planning regulations here,” Anna says, but the couple approached Helen Lucas Architects, a practice that has an extensive portfolio of house extensions both in Edinburgh and elsewhere. Although the cedar-clad extension is larger than the previous lean-to, the couple wanted to retain some of the courtyard area at the back. 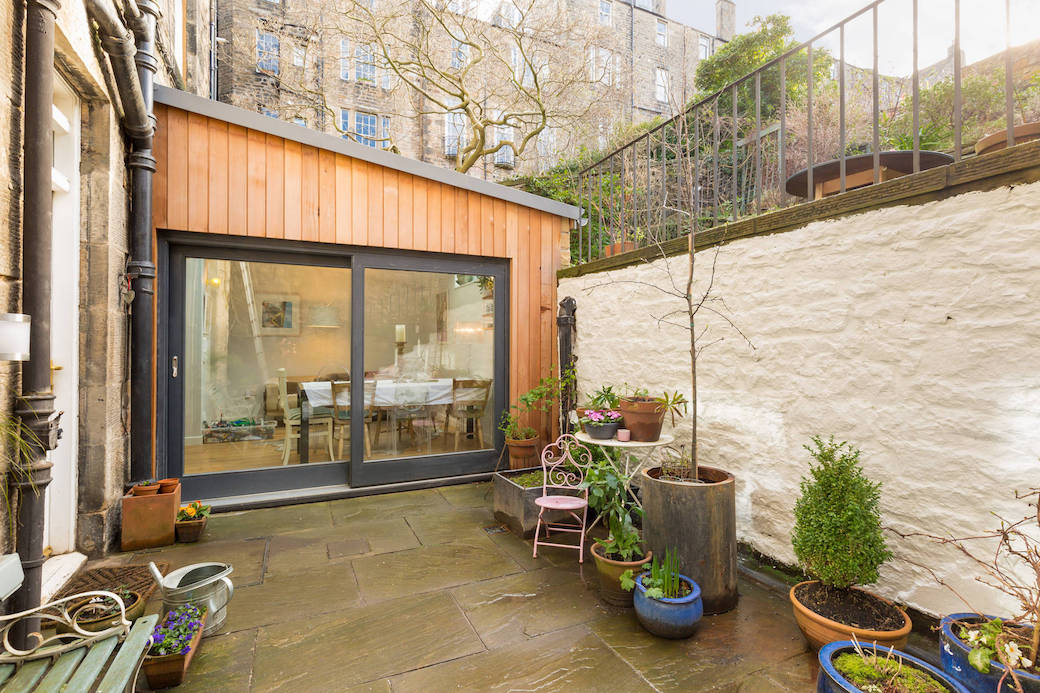 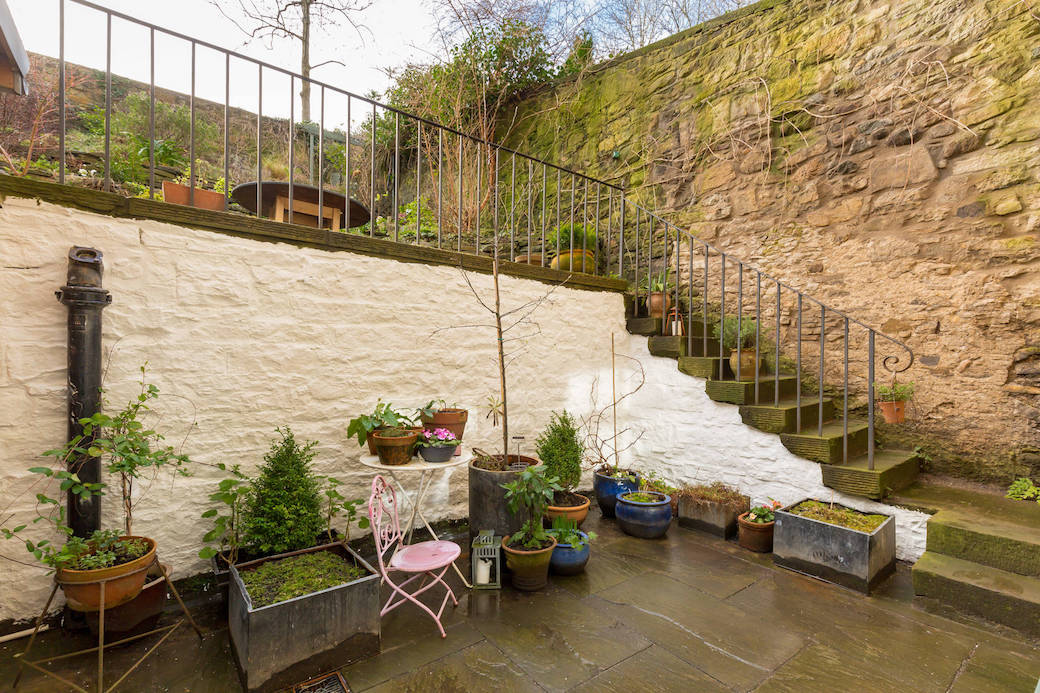 The existing rear window that had previously overlooked the courtyard was extended to create the new opening into the garden room. A large rooflight was inserted that slices across the roof and down the other side, pulling in even more light and also giving a long view all the way up the garden. 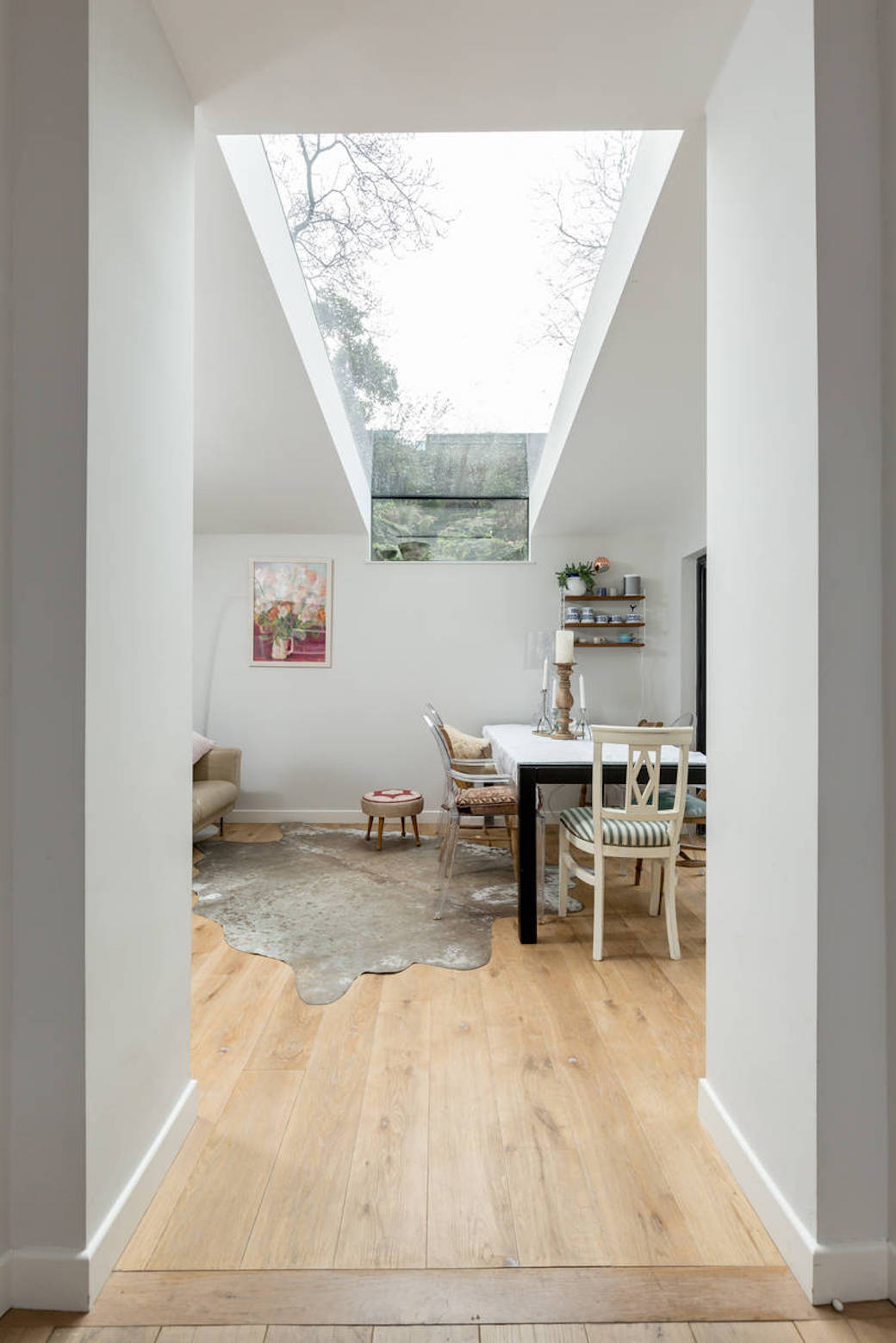 This detail alone was challenging for the builders John McMenamin – consider the scale and weight of this glazing, and the fact that every element of this extension had to be brought in from the street at the front, down the external stairs, and in along the winding hallway to the rear. But this feature was well worth the effort involved as it connects the living space with the garden. Meanwhile the zinc roof complements the grey tones of the external stonework. 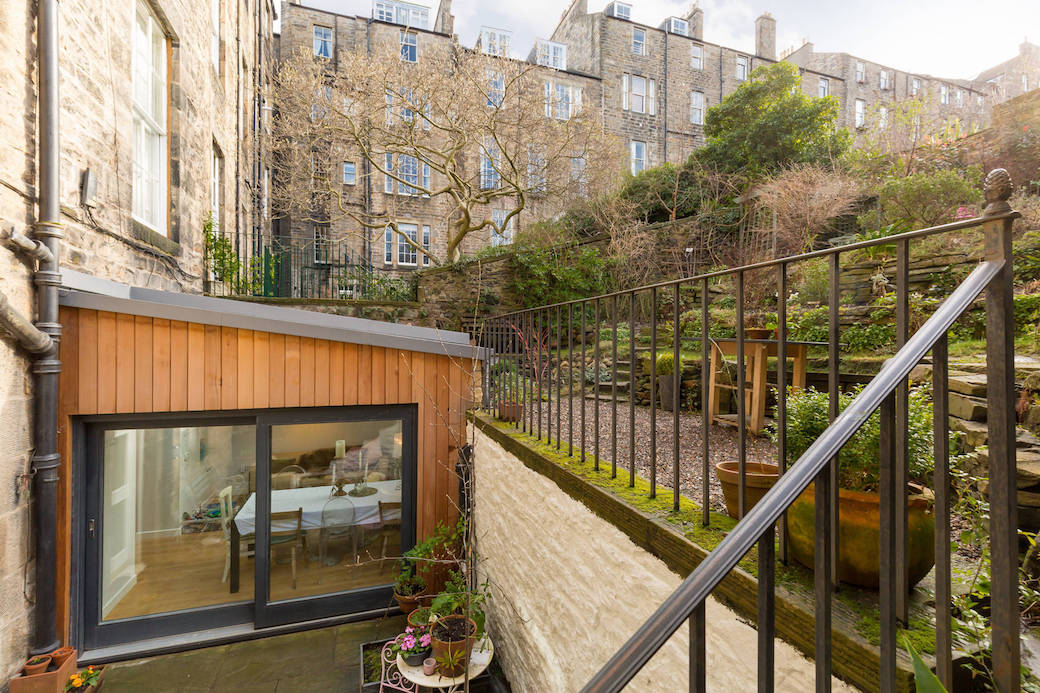 “Before we built this the kids would go and play in their room, but now they’ll play in the garden room while I’m in the kitchen, and in summer when the doors are open you have this flow through to the garden,” Anna says. The couple placed their existing Robin Day sofa in the new space and moved the dining table here too. As Anna says: “This is such a great social area now.” 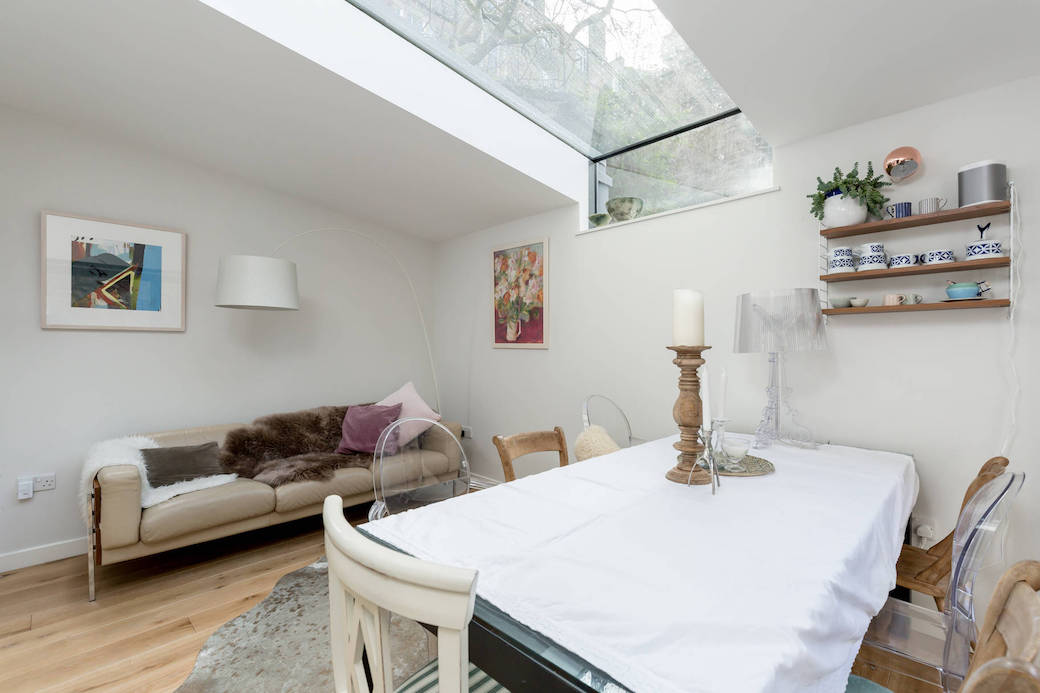 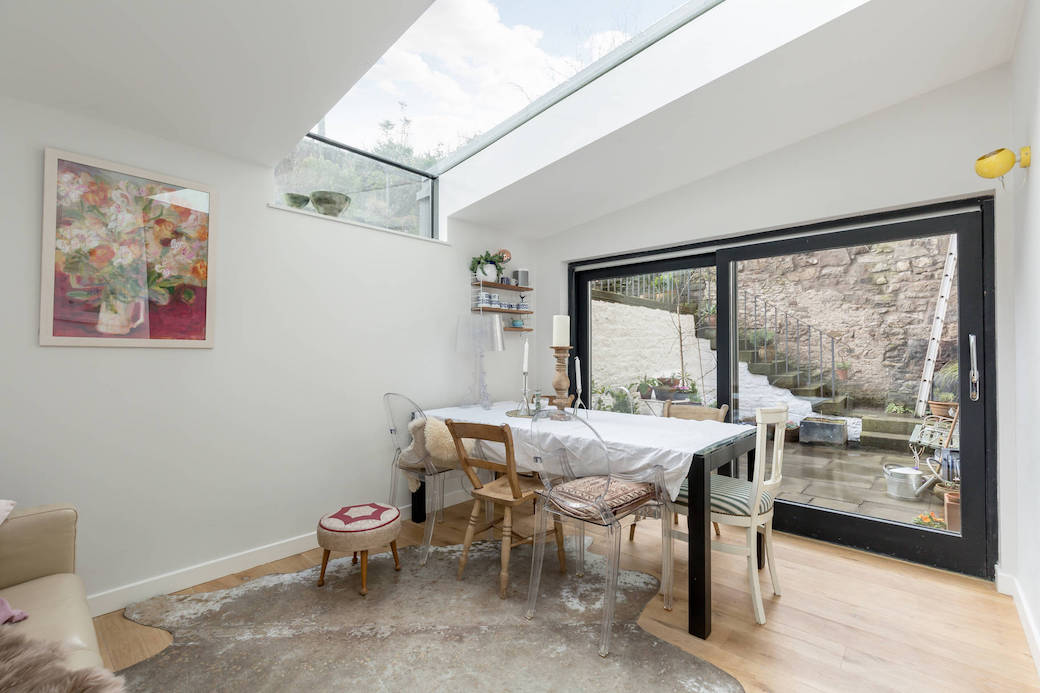 The kitchen was also altered. Previously, the cabinets had extended along the rear wall, but the couple wanted a bigger cooking and prep zone that was more practical for a family, so they installed the timber-topped island. They sourced the same cabinetry that had been fitted by the previous owner to ensure that the new and existing sections of the kitchen matched seamlessly. They also installed the Frandsen copper ball pendants from Moleta Munro. 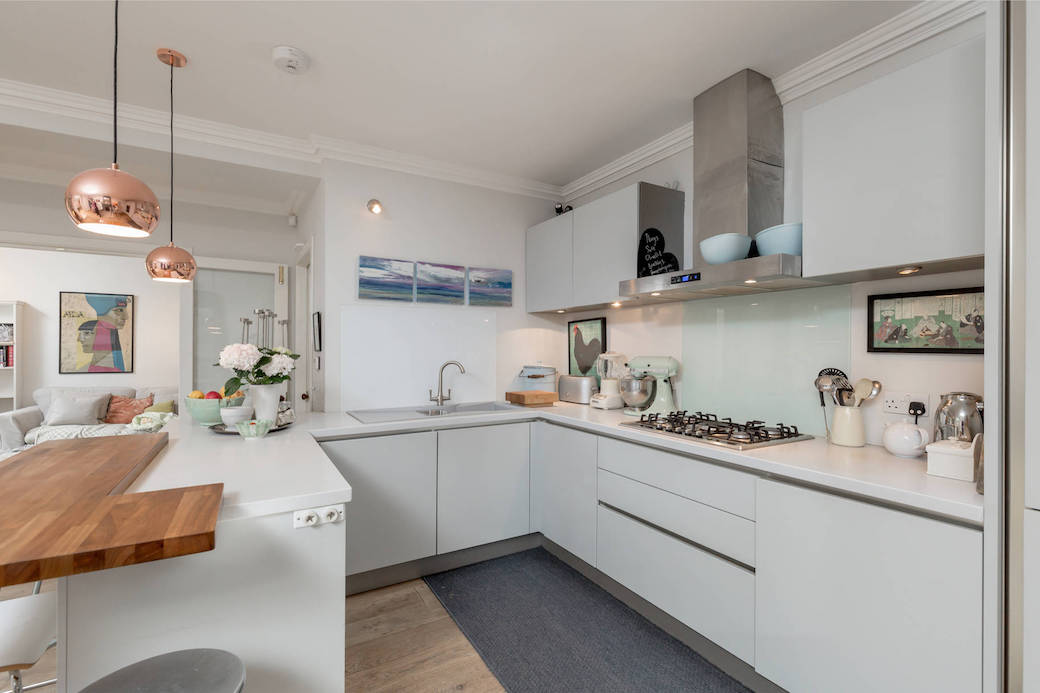 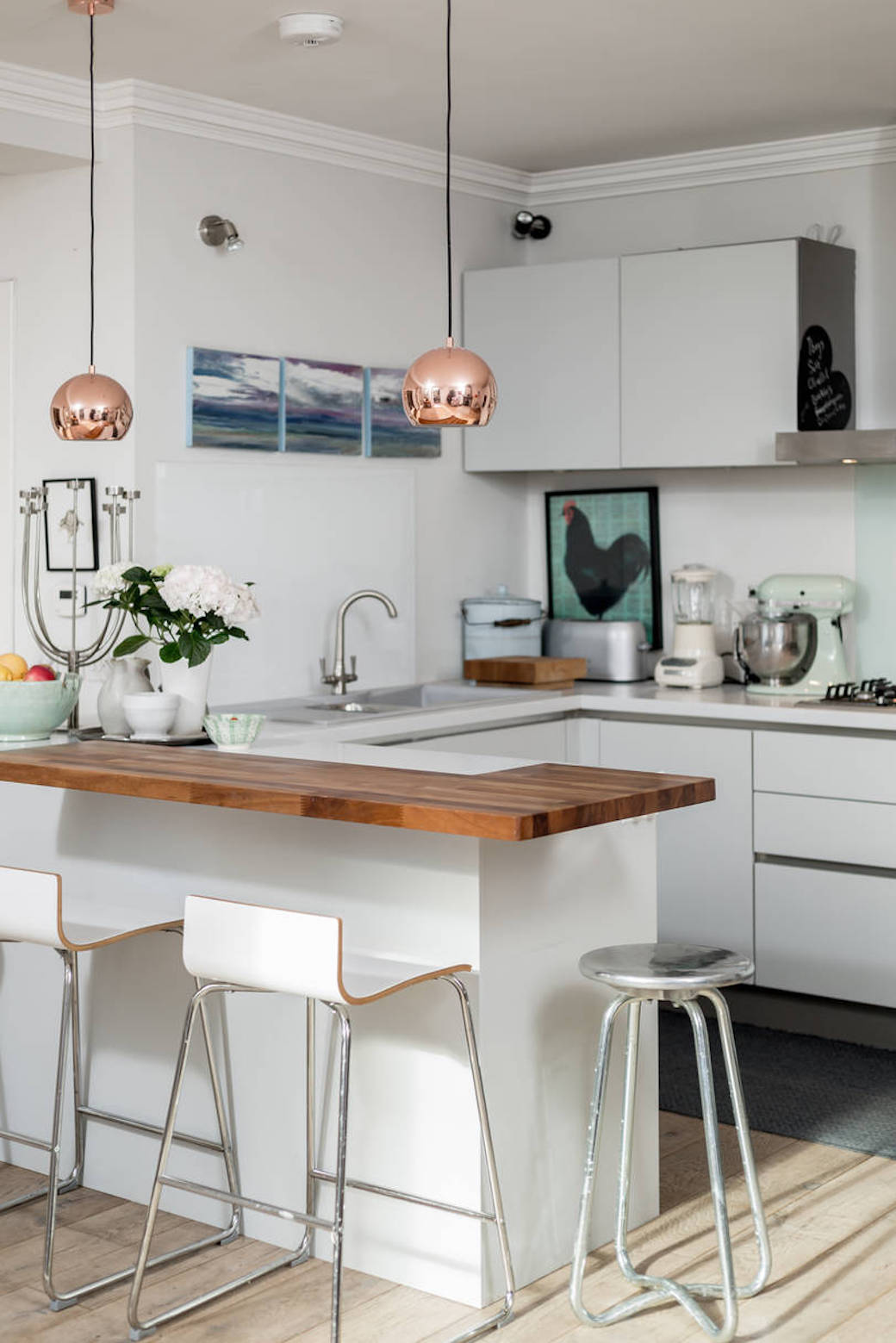 Glazed doors lead between this kitchen area and the sitting room – an informal snug zone with a desk space to work at, and with a view out to the rear terrace. The couple considered making this room into a third bedroom. “We actually had planning permission to close off the wall where the double doors open, and add another doorway to make this into a bedroom, but we realised that we love this space as it is,” Anna says. 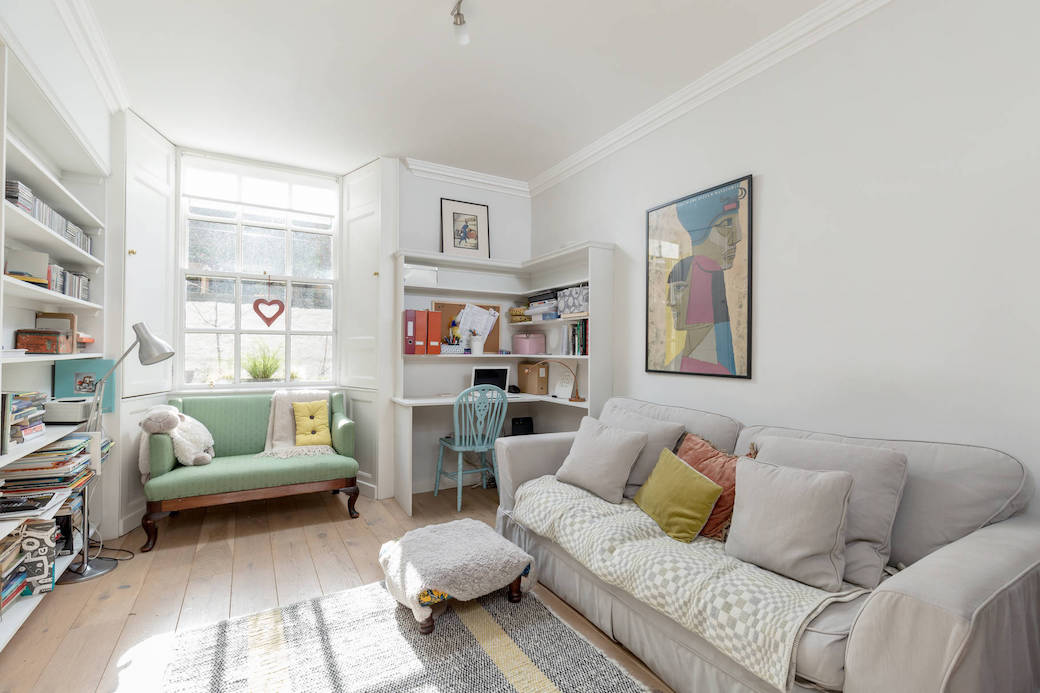 The previous owner had installed the woodburner in the main area, and Anna complemented this with a period fire surround from Holyrood Architectural Salvage. Throughout the flat, Anna has combined traditional and vintage pieces with contemporary design. “We always buy old properties, but I like that mix of contemporary within a period house,” Anna says.

Some pieces came from their London home, like the wall-mounted shelved cabinet that Anna spotted discarded in the street – it was being thrown out of a café in Hackney when she saw it. “There were two of them, and my only regret is that I wasn’t able to carry both,” she says. Anna now uses the cabinet to display her collection of glass. 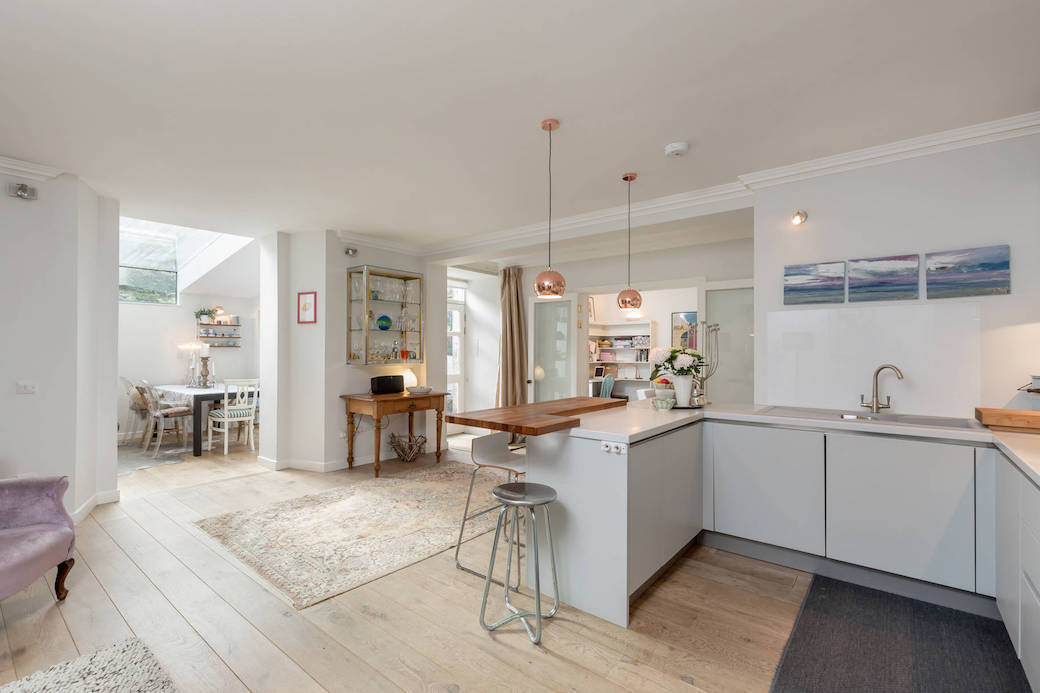 Other pieces came from Edinburgh’s Ramsay Cornish, like the small settee tucked into the window space in the sitting room, or the dresser alongside the fireplace, which was plain pine when Anna picked it up for a tenner – it’s since been transformed with dark grey paint. Meanwhile the armchair by the fireplace was a family piece that Anna upholstered in soft pink velvet – a gorgeous hue against the grey of the cabinet and fireplace. The end result is a very personal and eclectic mix.

This flat also demonstrates that you don’t always need to extend a space by much to have a huge impact. The garden room isn’t a large extension, but it’s transformed the way this home feels and flows and functions. 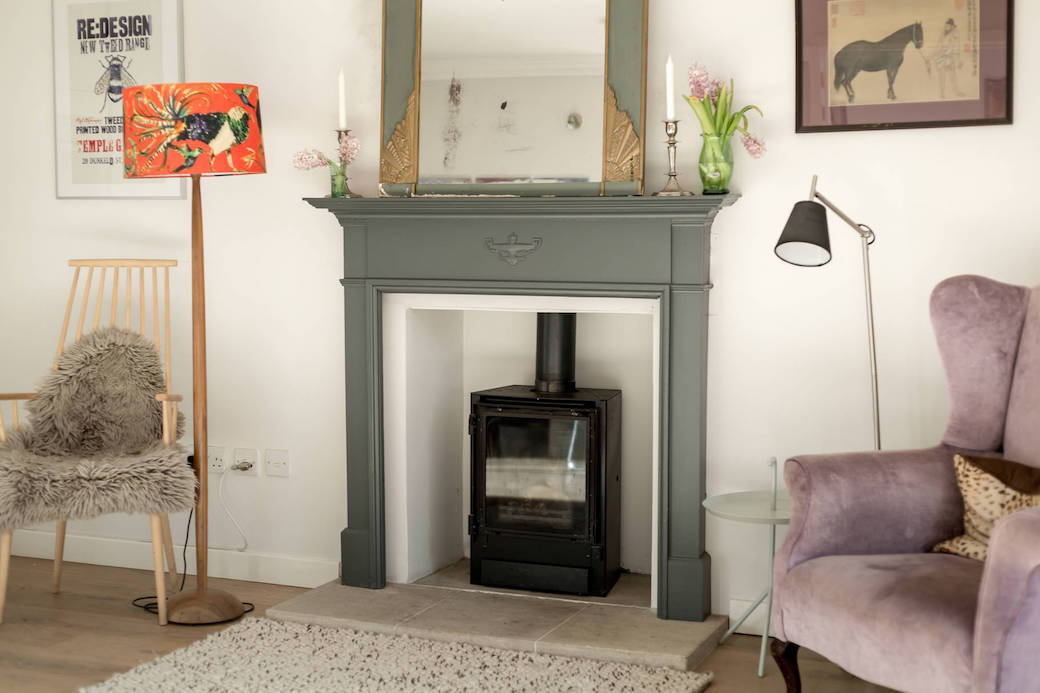 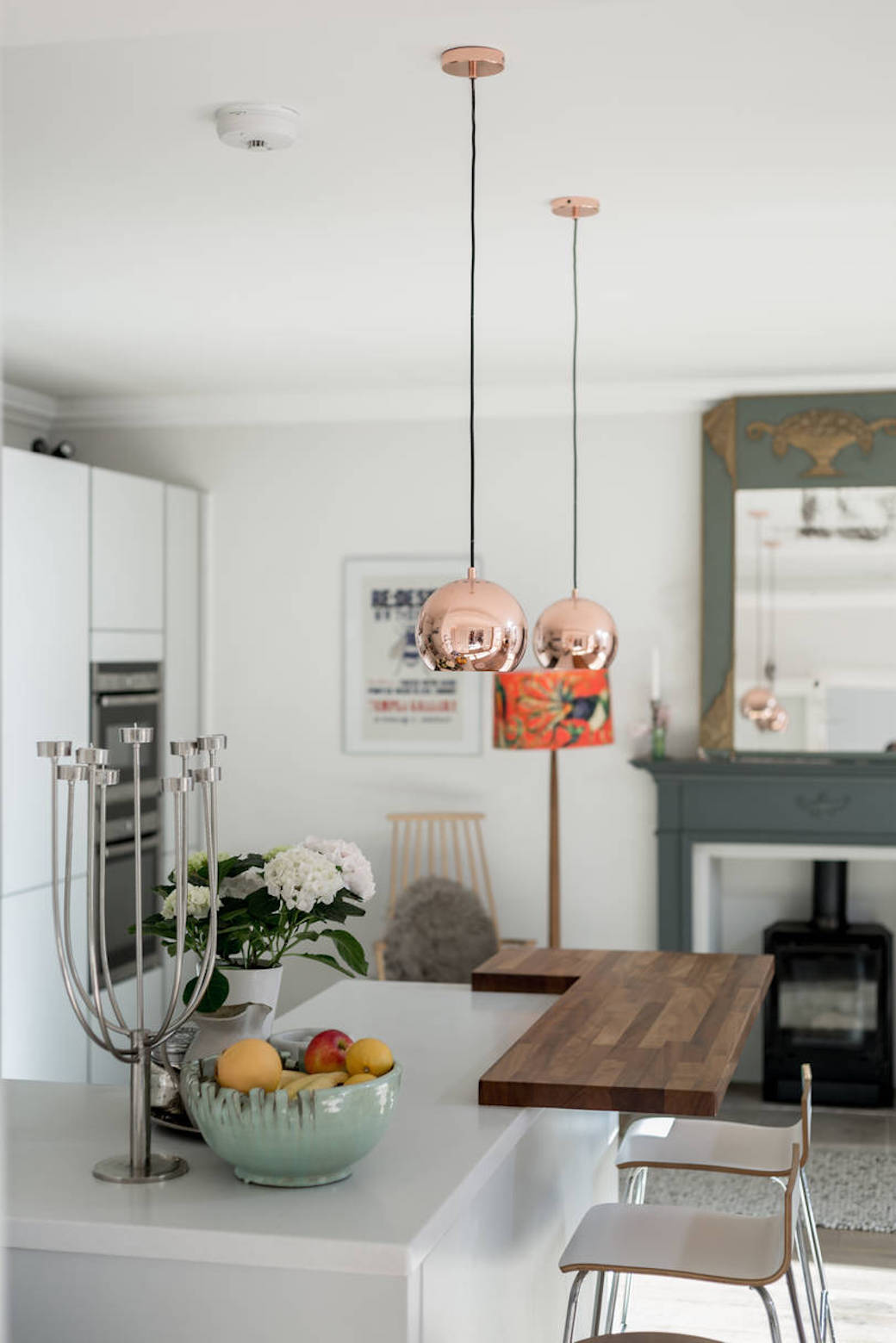 This flat was marketed by Simpson & Marwick; all photography by Square Foot Media.