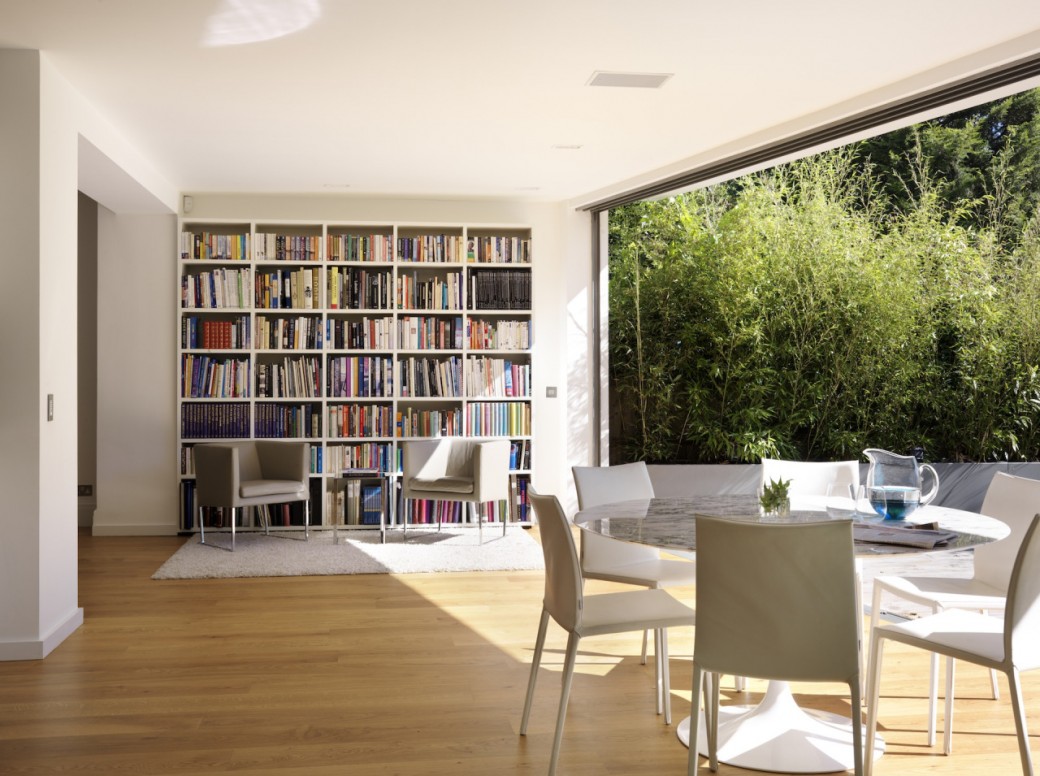 “If you have a lot of glass, you need a fantastic view,” architect Gregory Phillips reflects, and there’s no denying that his own home in London’s Muswell Hill includes both these features.

From the front, the semi-detached house appears traditional, but move to the rear of the property and you’ll discover an incredible open plan living space incorporating seating, dining and kitchen areas, with an entire wall of glazing pulling in the views to the rear garden. 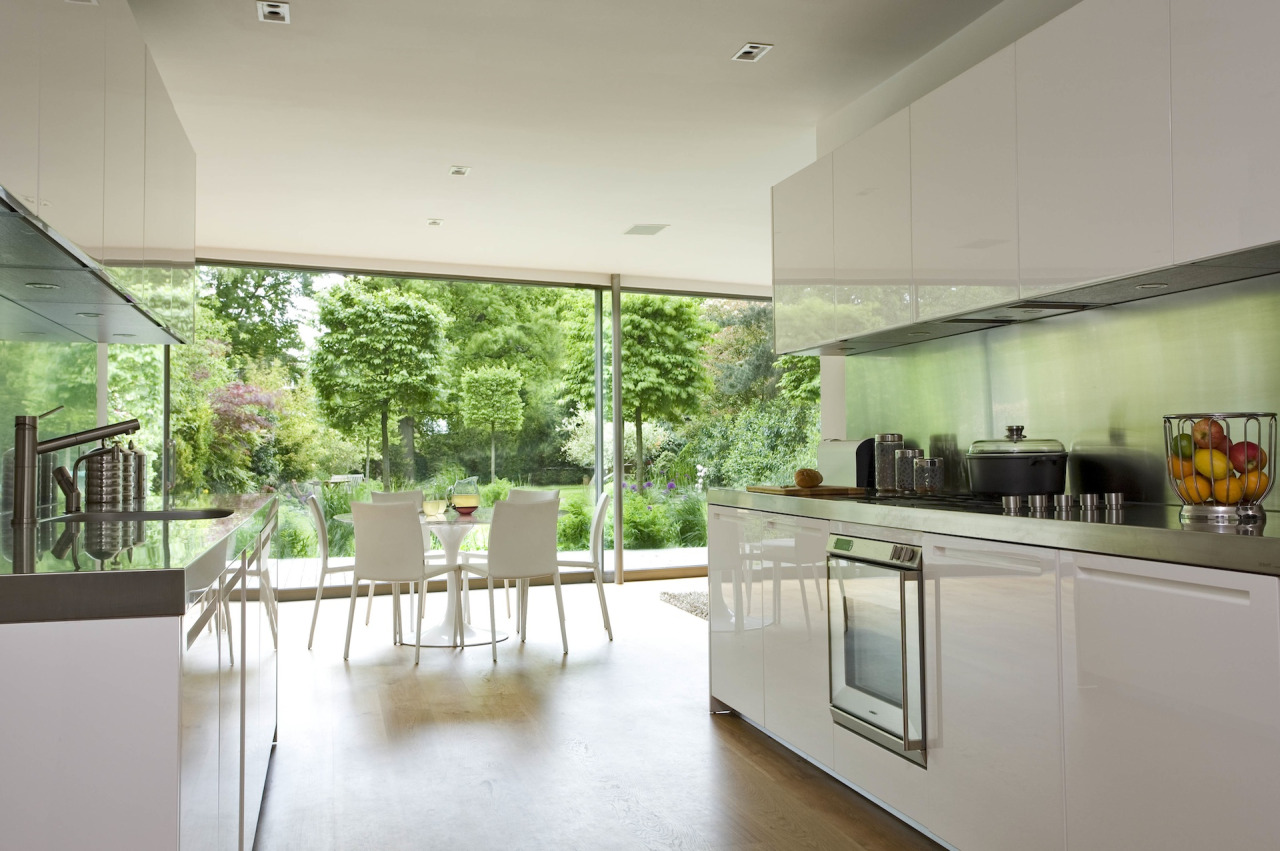 And what a garden. Designed as a series of external rooms, the garden was an integral element of the overall design and has been an ongoing project since 2007 – the year after Gregory and his wife Sara bought this 1930s house. At the time, Gregory didn’t realize that his family home would become a laboratory for ideas that he would go on to use in client projects. Gregory Phillips Architects has won national and international awards for both interior design and architecture, and clients include leaders in the fields of finance, technology, property and sport, as well as entrepreneurs.

Indeed, Gregory’s own house has been recognized and awarded for its striking design: the project won the Daily Telegraph H&R 2008 award for Best Extension/Remodel and was a Grand Designs finalist for Best Extension in 2009 as well as picking up a British Property Award for Best Interior Design UK in 2009.

I caught up with Gregory to discuss the design process behind his home, and how this ‘laboratory of ideas’ has influenced the work he does through this Savile Row practice. 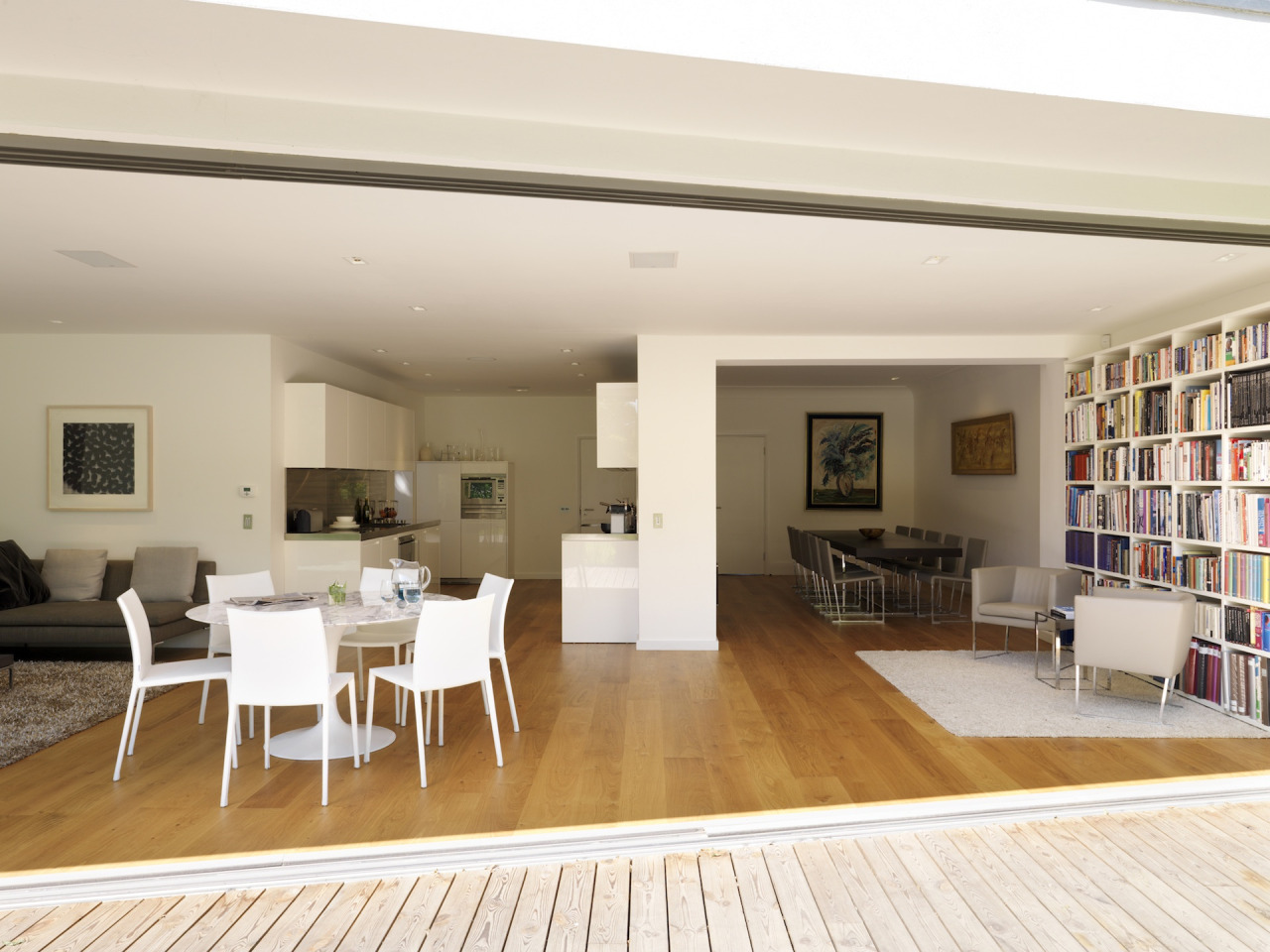 When you bought the property, was it obvious how much the building could be developed? Were you looking for a project at the time?

I knew that the building had potential.  The house is a standard semi-detached Metropolitan-style 1930s house. It was in terrible condition. Given that it’s not in a conservation area, I knew that a loft extension and rear extension would be achievable with the right design. I was certainly looking for a project. I wanted to create the type of house that I make for other people. I then realized that I could try out new products, details and finishes on my own house. The result provides me with a place to take clients to show them what can be achieved from a traditional house. 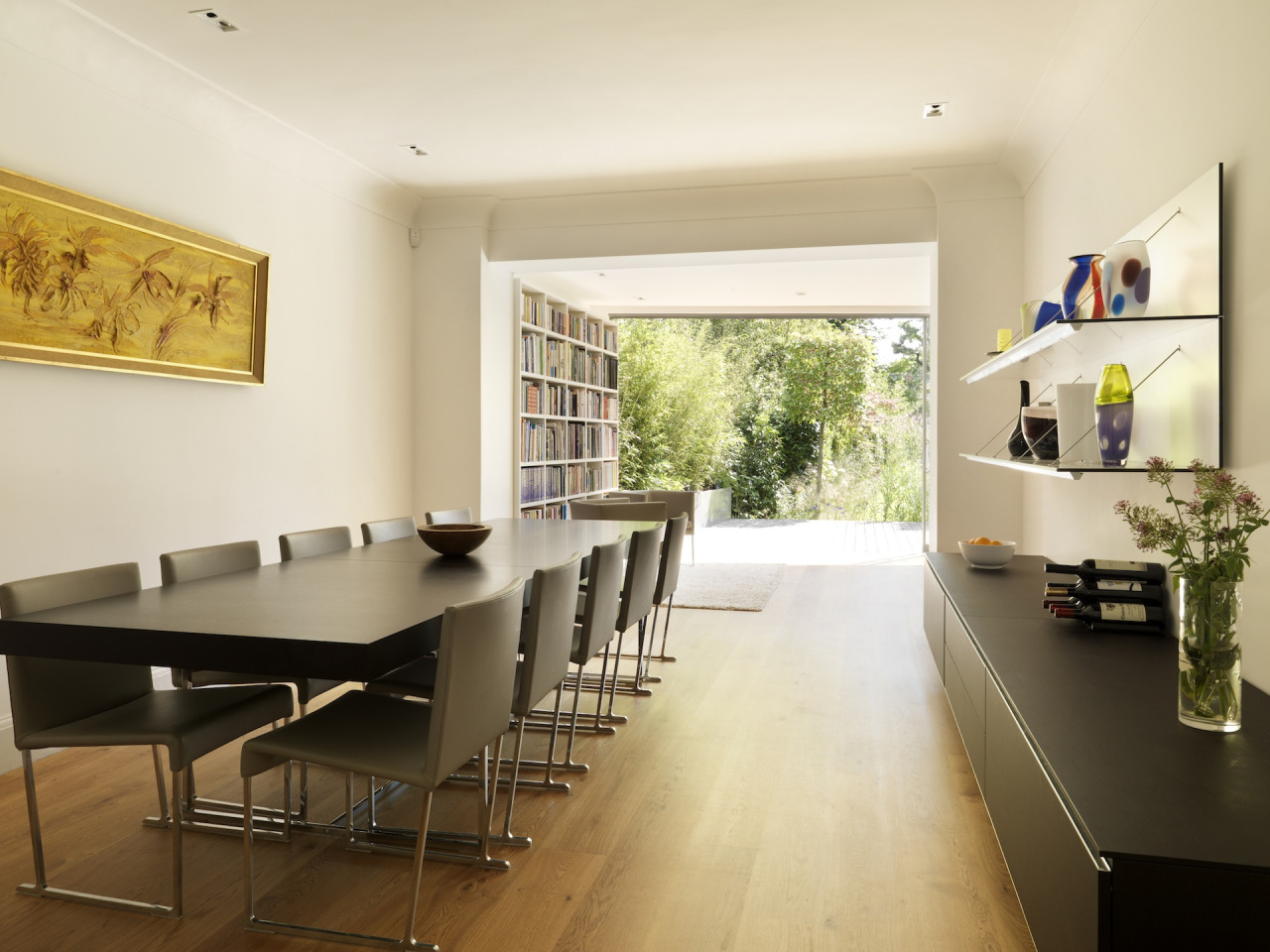 How did you begin the process?

In the first six months after we bought the house, I started with new plumbing and electrics and the associated re-plastering on the walls and ceilings. However, when I did this I knew the design that I was aiming for and started to plan for future ideas that I might have. The next phase involved the rear extension and the kitchen, along with the conversion of the garage and remodeling of the first floor bathrooms. The next phase some years later involved the loft extension to create a master bedroom suite with a balcony, and the enhanced garden design, which has been an ongoing project since 2007. 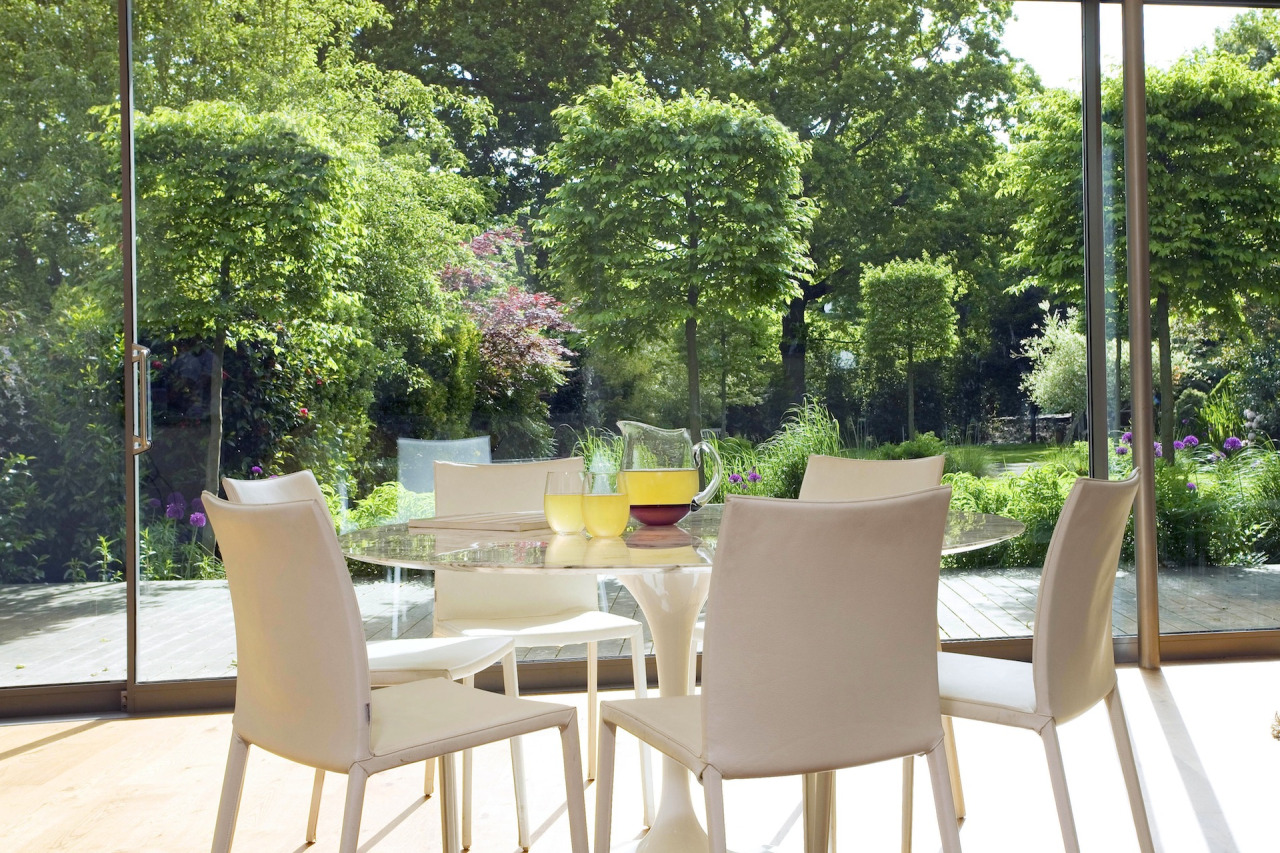 What were the issues in terms of the way the existing house functioned?

The original house had a small scullery and breakfast area where our new kitchen is situated. Then it had a formal lounge to the rear and a formal dining room at the front of the house. In the 1970s, previous owners had added an extension that looked like a Portakabin, to locate the kitchen in a larger space. This meant that the house had ‘dead’ space – landlocked rooms with no function. It also lacked a decent living space. The utility room was accessed externally via the garage. In short, it did not work at all for our lifestyle.

How did you go about the redesign process, particularly in opening the house up to the garden?

I knew that I wanted to create a space that had an amazing connection with the garden. The installation of a 10m length of glazing was always going to be the ‘big gesture’ that the design evolved around. For me the main living room feels like it is 100ft deep as the garden becomes part of the room visually. We can enjoy the weather, the changing seasons, and looking at the squirrels and birds and the occasional fox. 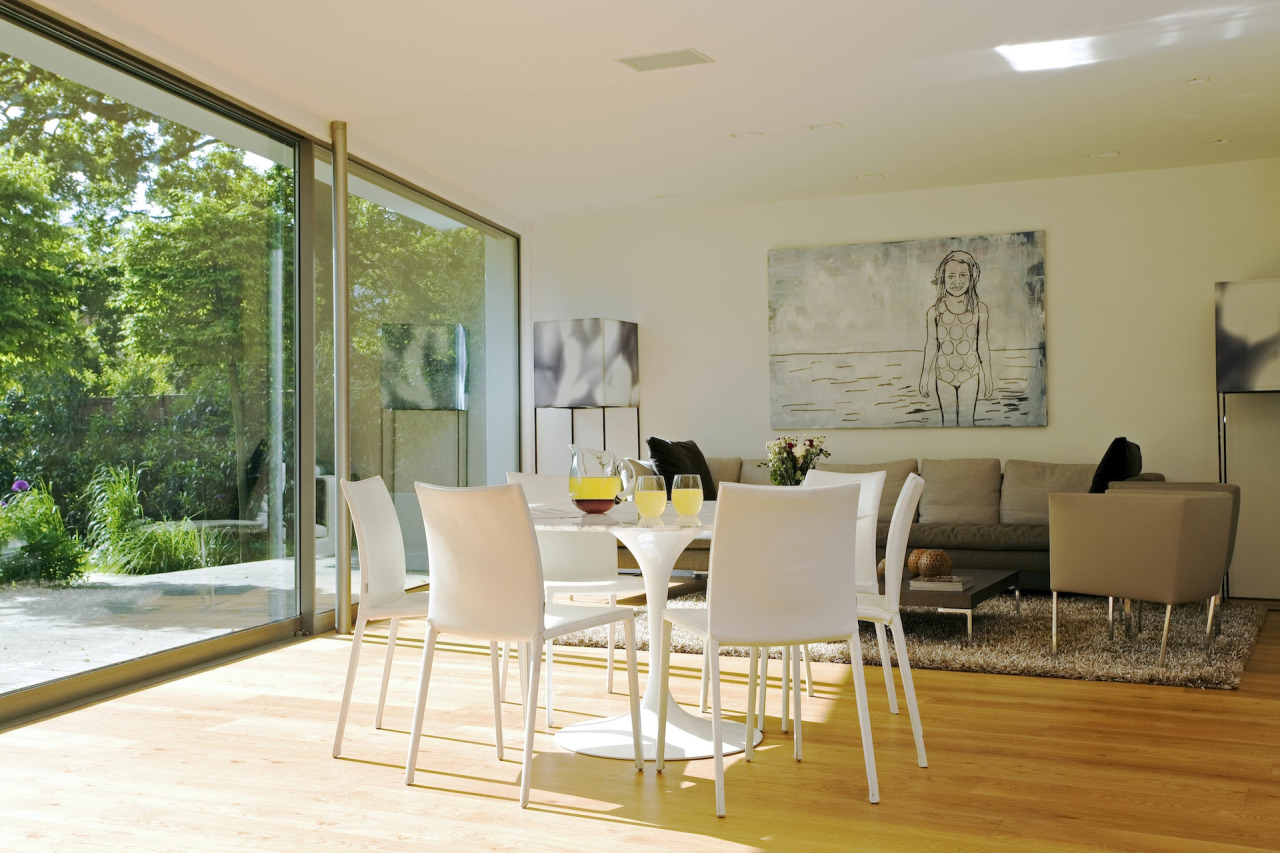 What was your inspiration for this area? Was it about entertaining, for example, or family life?

We use the space all the time. I believe people should be able to enjoy as much of what they have as much as they can. We have a large space that can adapt to different uses. These uses have included family life (there are five of us) where we’re eating, living and cooking in this space, to dinner parties and everything from cookery displays and teenage discos to art classes, meetings and lectures as well as film shoots. We use the space to its full potential and often relocate the furniture as our needs develop.

Were there any planning restrictions that you had to work around, or specific challenges of the location?

The neighbouring house had previously been extended. I didn’t want to create a shade issue or loss of amenity issue for them, so I angled the rear extension so that it was deeper away from the neighbour’s side. In this way I created a more interesting and appropriate design. 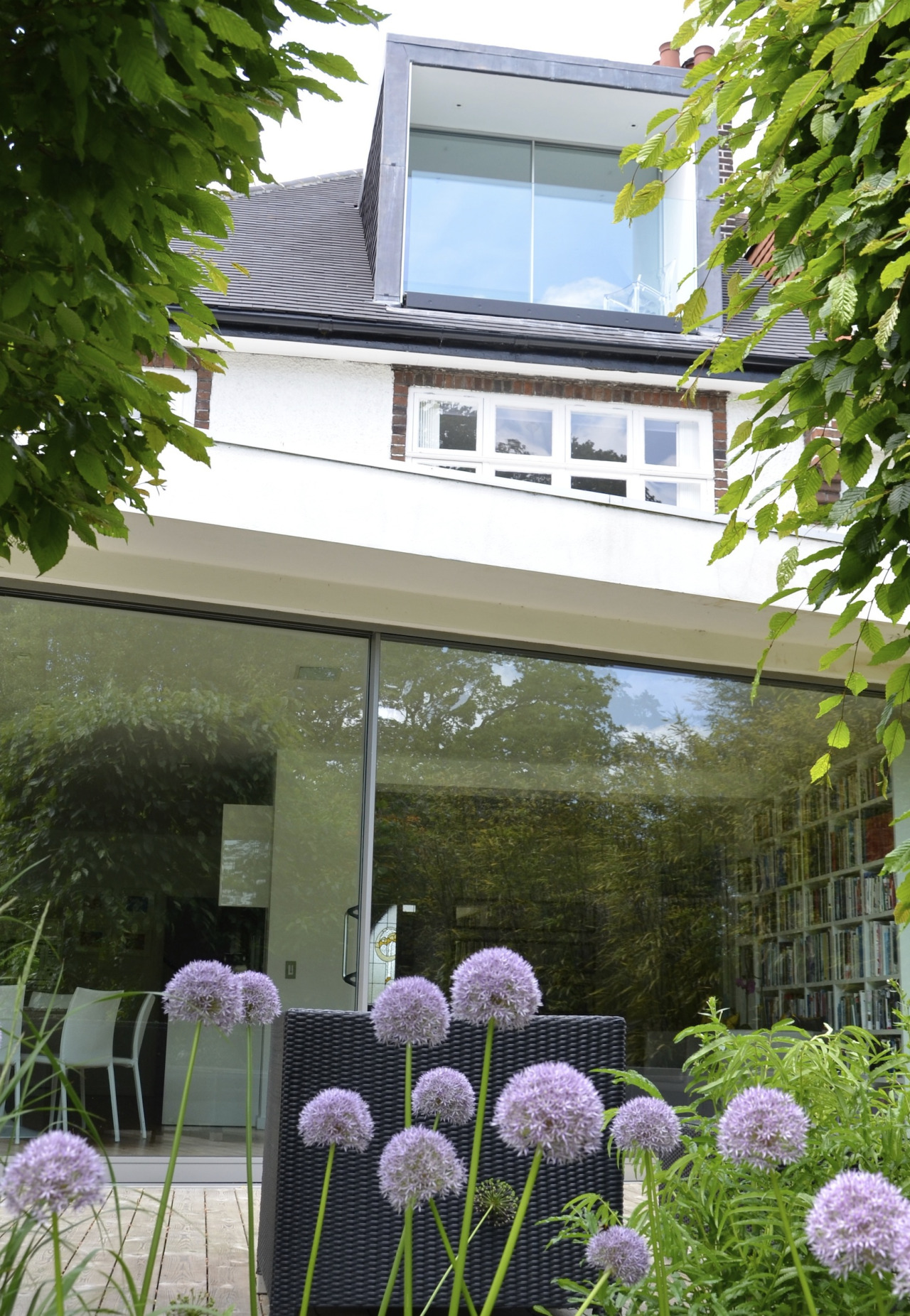 From a design perspective, were there any challenges in creating a strikingly contemporary home from a 1930s house with its inherent architectural detailing?

I think the contrast works well. With a period house you can replace details or add details; either way you can avoid pastiche. The exact response is a question of having a good eye and a good design.

How have the projects you’ve tackled through work influenced the way you’ve approached your home?

There are various elements that were tried out in my house that I have used in other peoples’ houses including a fine, thin section glazing system – in this case fineline aluminium; highest quality engineered timber flooring and external timber decking; marble bathroom design and recess miter niches; as well as light fittings, timber flooring and joinery finishes and carpet finishes and paint colours. I’ve also used ideas from the garden, including the pleached trees and the use of alliums and grasses to give a near focus view to the house. 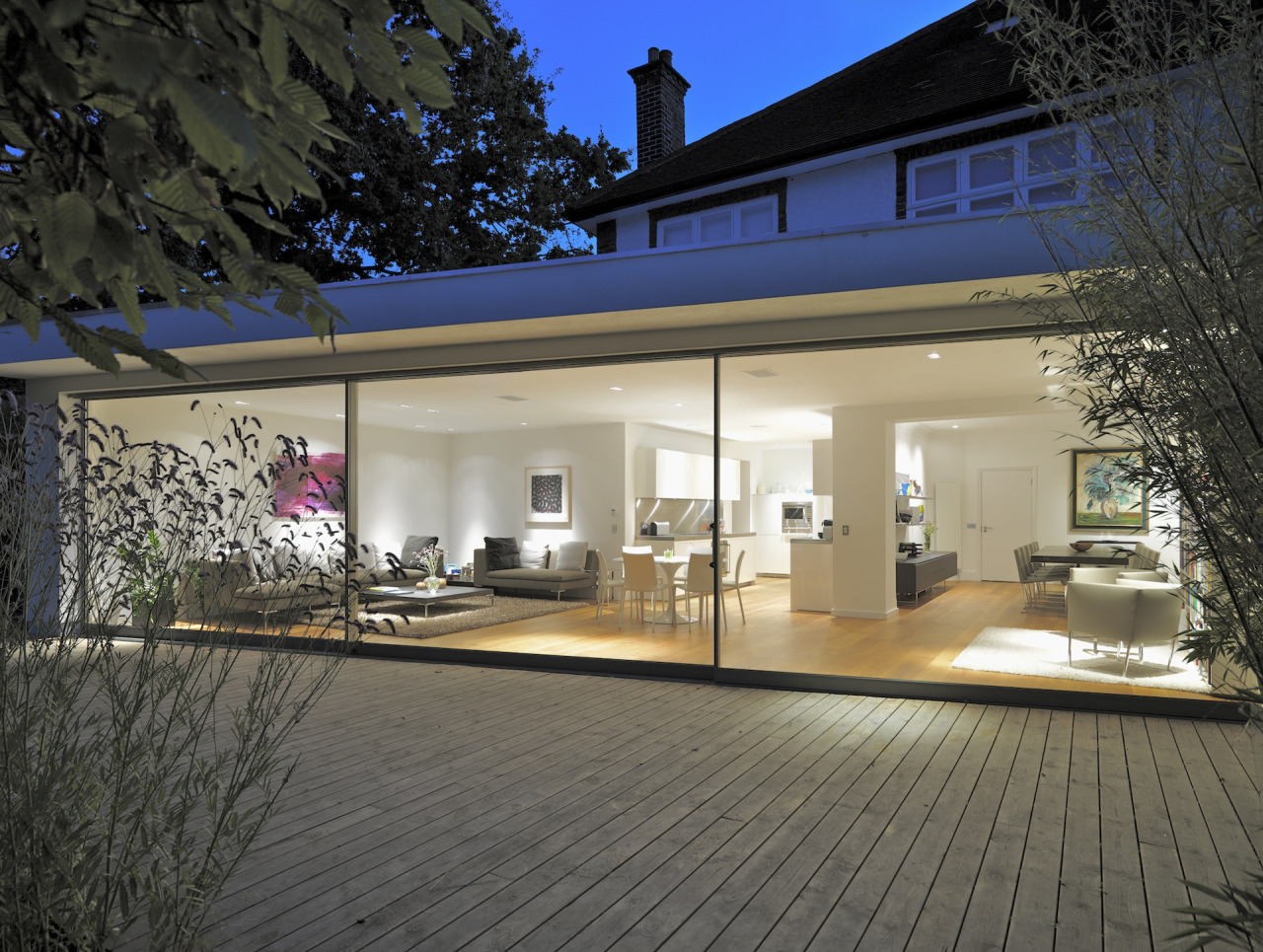 And were there features you had used in other projects that you integrated here?

Yes, the Boffi kitchen with stainless steel worktops and splashback; the Lutron lighting and integrated audio visual systems and underfloor heating; bespoke joinery to my design; and also the steam shower room.

Are there any elements to the house that have exceeded your expectations?

The connection with the garden, and the experience of living in a fantastic space with beautiful furniture. 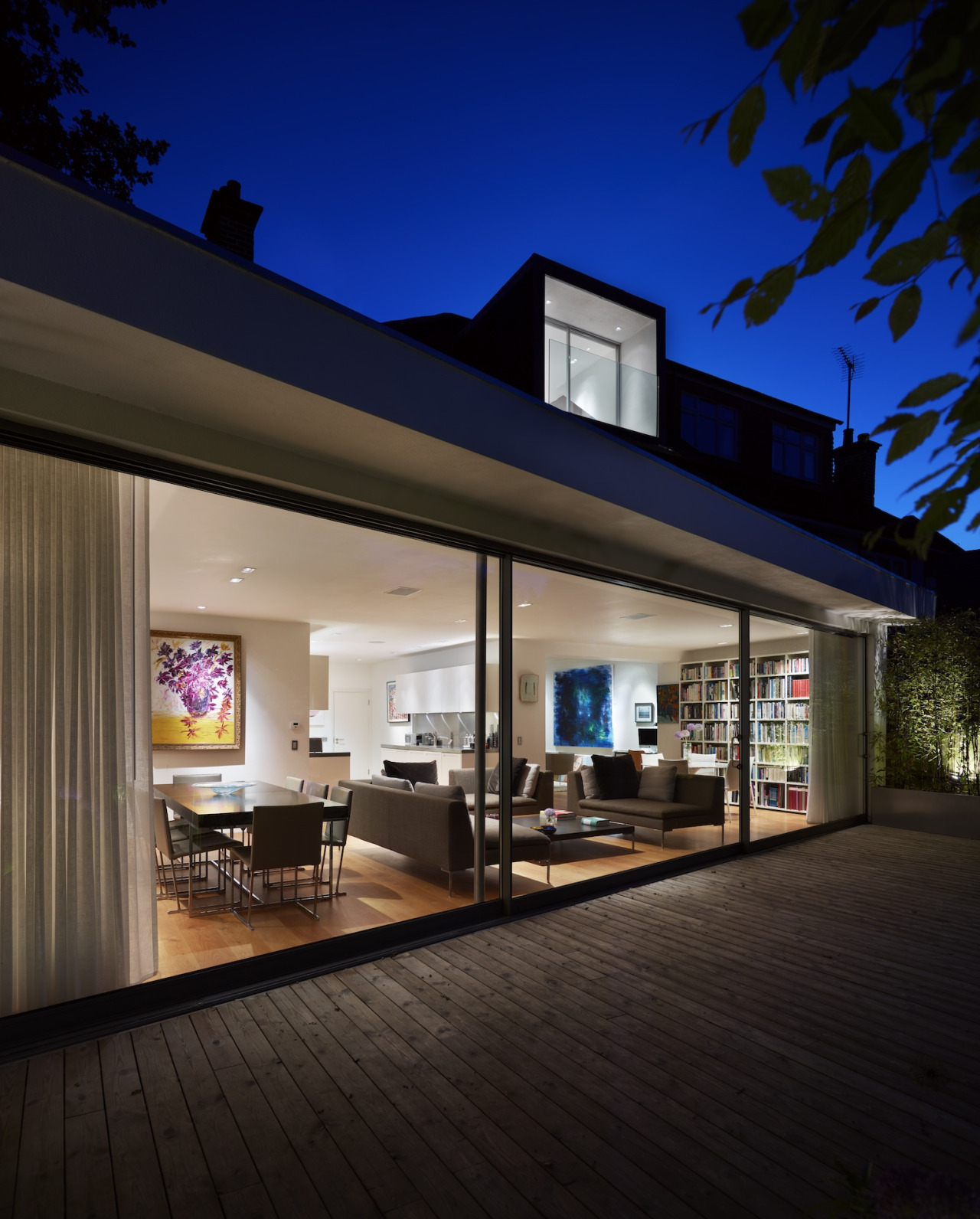 If someone reading this is considering – or indeed living in – a period property with similar challenges, what would your advice be?

It’s important to work out what aspects of the existing house have a quality that is worth retaining. Concurrent with this, the design needs to allow for the lifestyle needs of the occupiers. So being clear about what you want to achieve and then giving a clear brief to a designer would be key.

What’s next for you?

We have a number of new projects on the go, from substantial basement extension schemes to house interiors and remodeling projects. We’re also building a number of new houses, including projects in Reading, Totteridge and Surrey, and a 1,200 sq/m contemporary family house in Staffordshire, which starts on site later this summer. We’re also working on an apartment design in Chelsea and the interior design of a house in Hampstead. 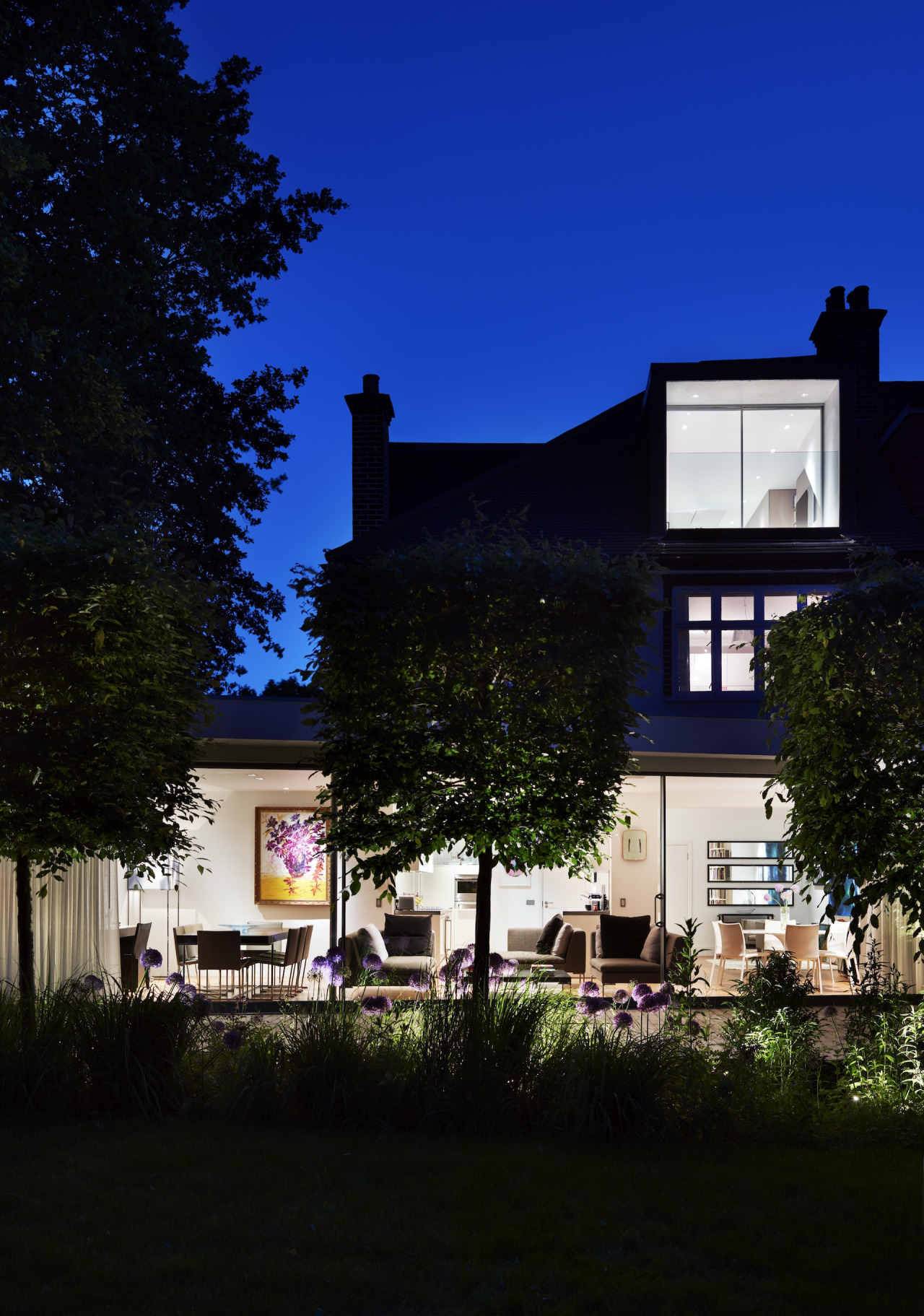 And with your own home?

I still have a few more projects up my sleeve…