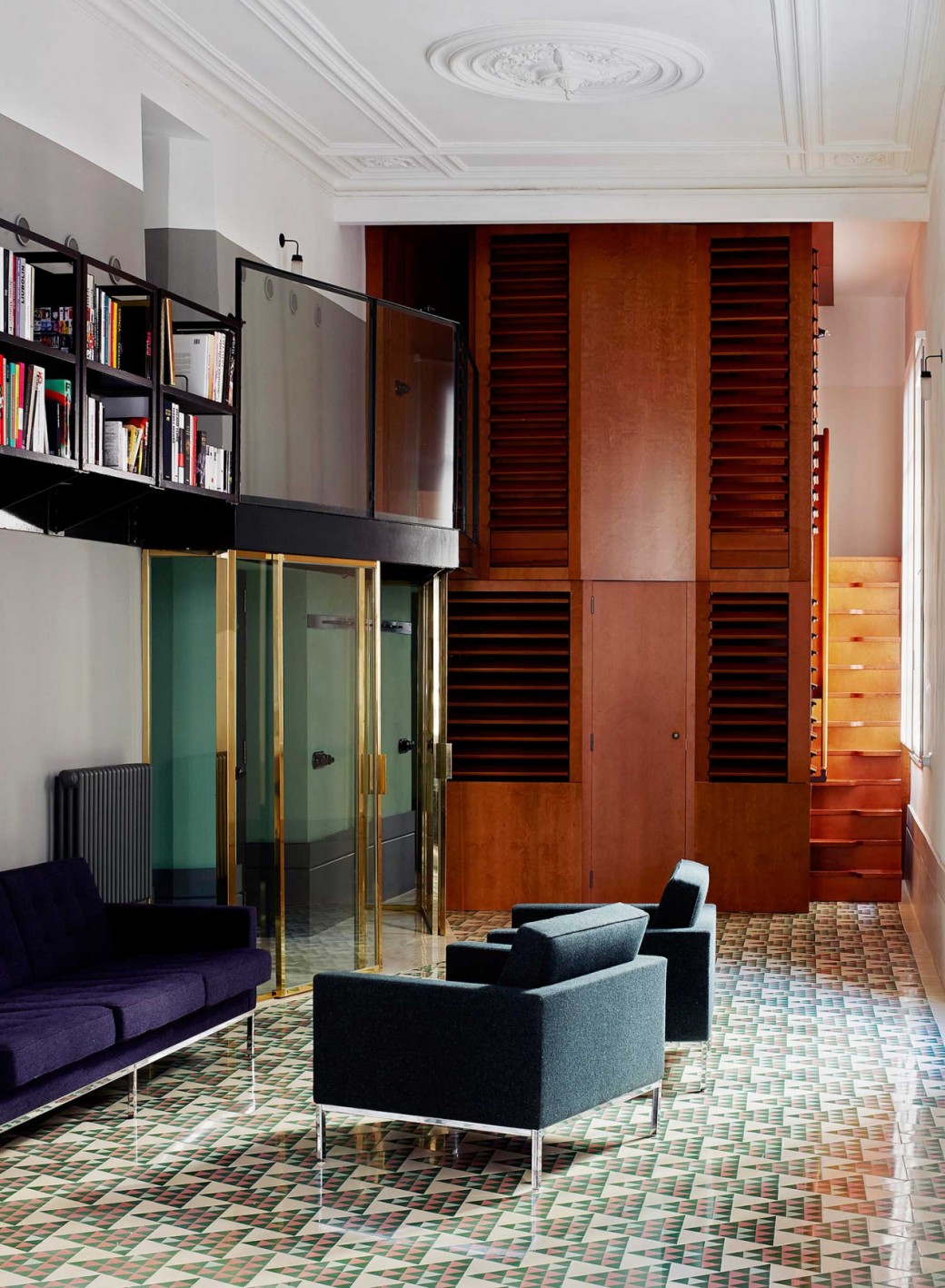 If you noted my previous post, you’ll have clocked the geometric tiling obsession, and that post reminded me of this incredible property located in the heart of Barcelona. There’s geometric tiling, and then there’s geometric tiling – that is, tiles that are used as an integral design element, both in terms of their decoration and, as here, as a means of defining zones within an open plan living space. 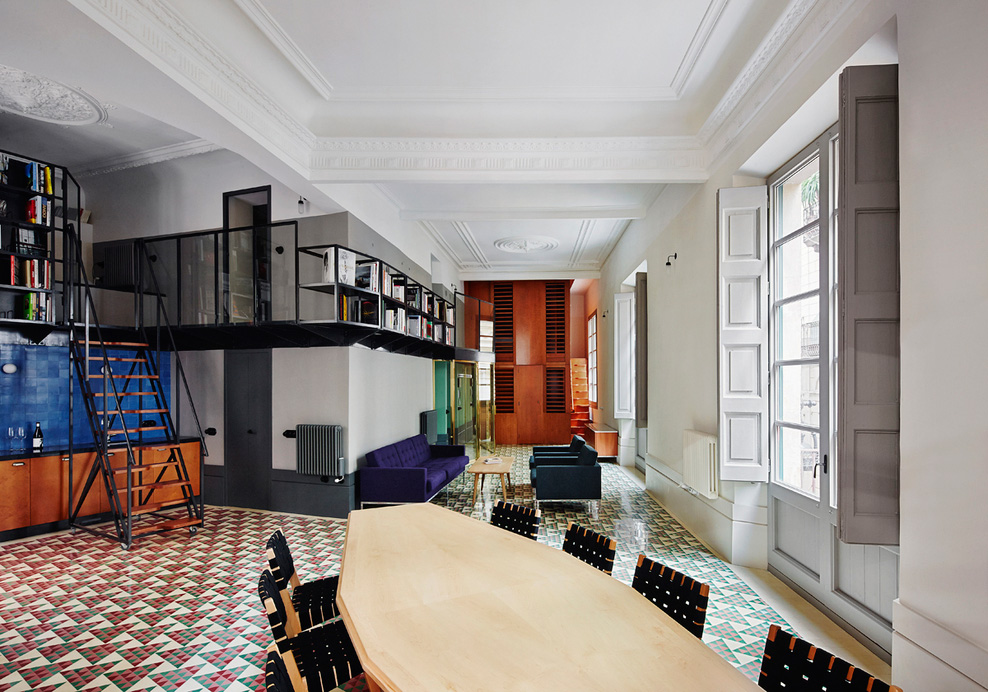 The design of the Carrer Avinyó apartment is absolutely fascinating – and don’t just take it from me: this project by David Kohn Architects picked up the prize for World Interior of the Year at the INSIDE Festival of Interiors in 2013. There have been a few fantastic posts on this space (which is how I spotted it) including this post on Yatzer and this great feature on Yellowtrace – do check them out for more photos and information. 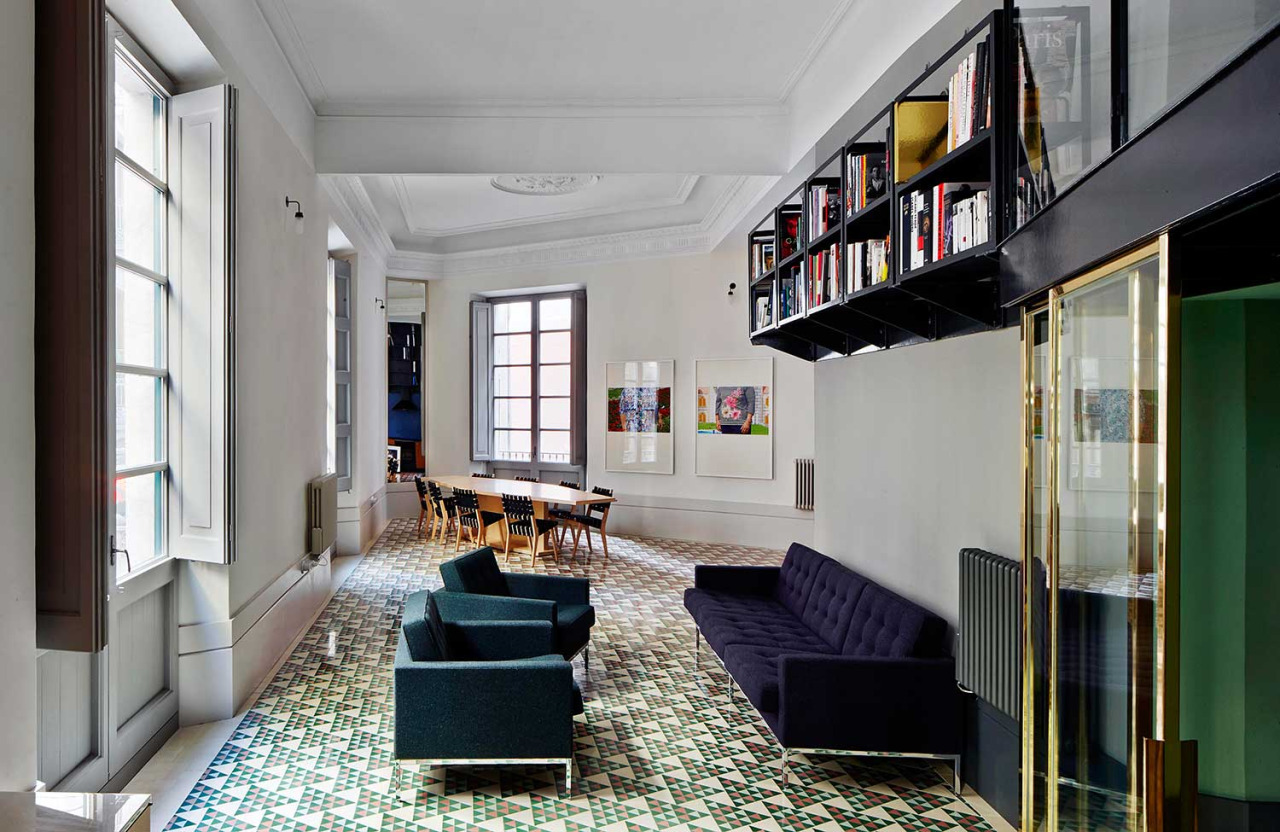 The apartment is a second home for two brothers who grew up in Barcelona, and was redesigned to offer a balance between private and shared space. The open plan living, dining and kitchen space is frankly incredible. Look at the scale. Look at the period detailing! Look at the way this detailing is juxtaposed with the contemporary additions, from the punchy kitchen (seriously, those blue tiles…) to the suspended library/gallery. 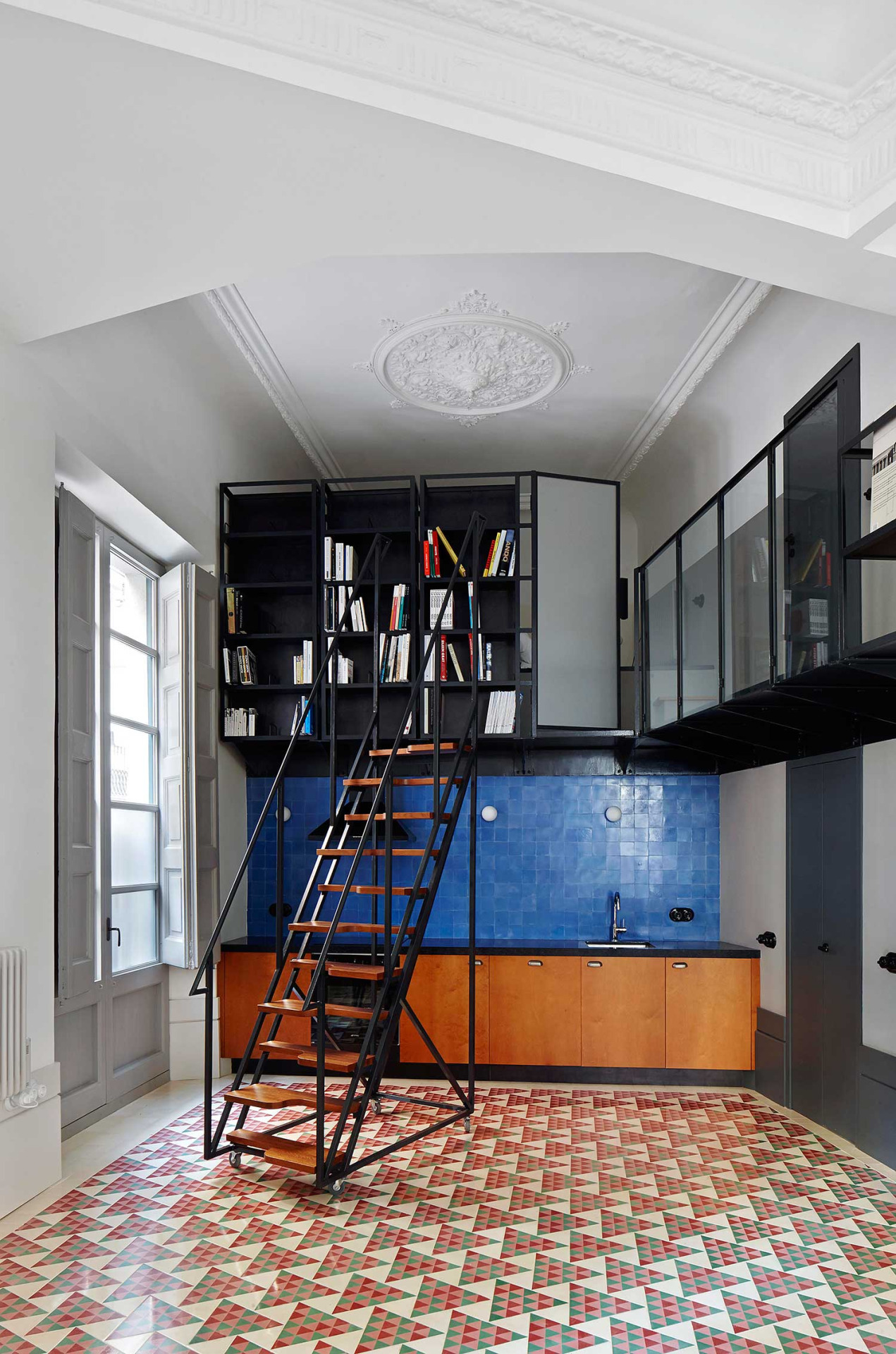 The two bedrooms were created inside the timber ‘tower’ at one end of the space – a genius addition, as this section feels like a beautifully crafted if super-scaled piece of furniture. Architect Kohn has described this as “a kind of scale replica” of a 1950s apartment block by Spanish architect Josep Antoni Coderch that’s located in the La Barceloneta neighbourhood of the city. Meanwhile the entrance lobby has a brass frame, introducing a little bit of Art Deco luxe to the aesthetic. 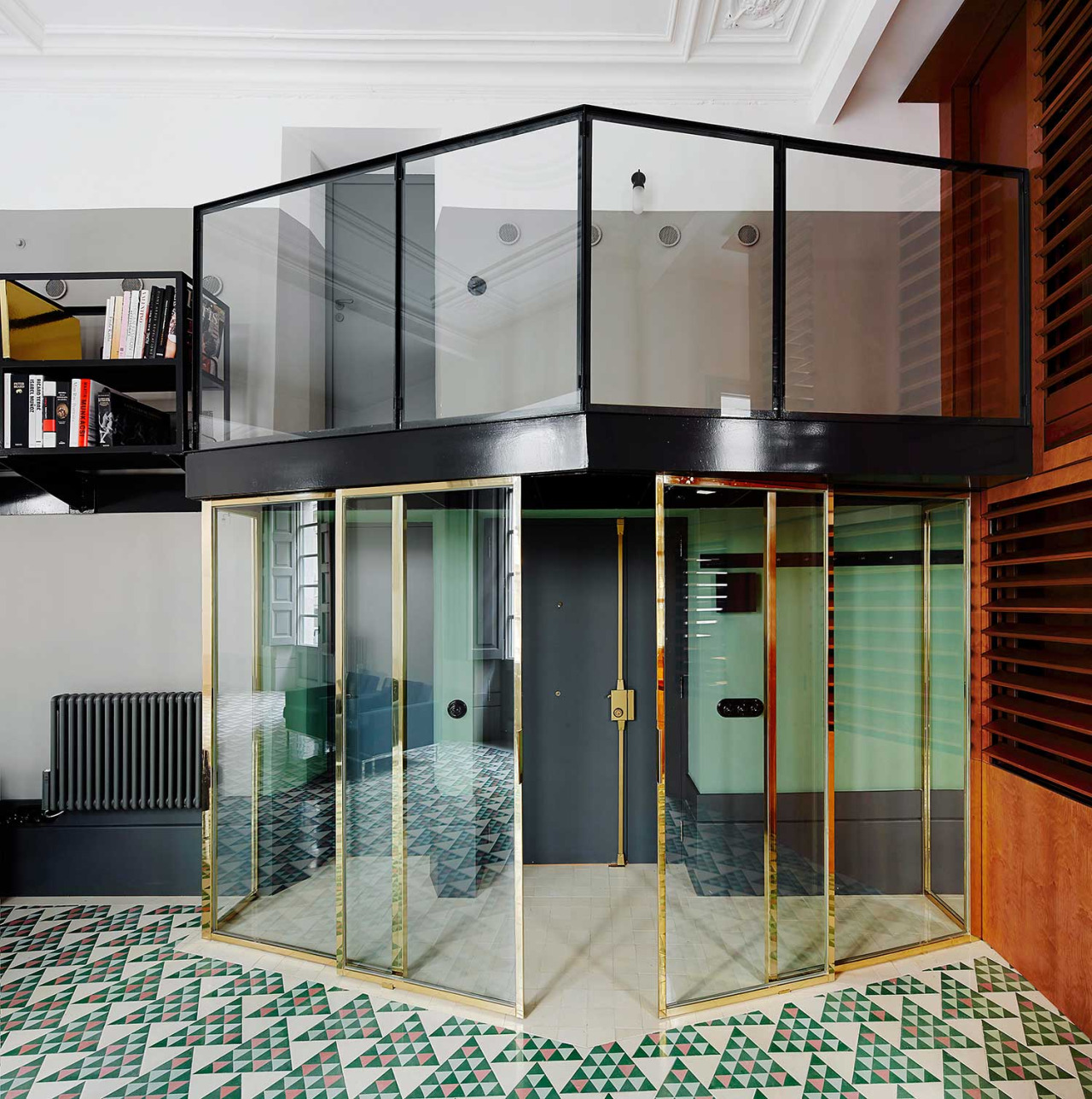 The floor plan is particularly unusual as the building is triangular and the geometric floor tiles not only reflect this but enhance the effect. The tiles were ordered from Mosaics Martí and were designed using 25 colours that progressively change throughout the space. I’ll admit that I didn’t clock this feature when I first looked at these images. 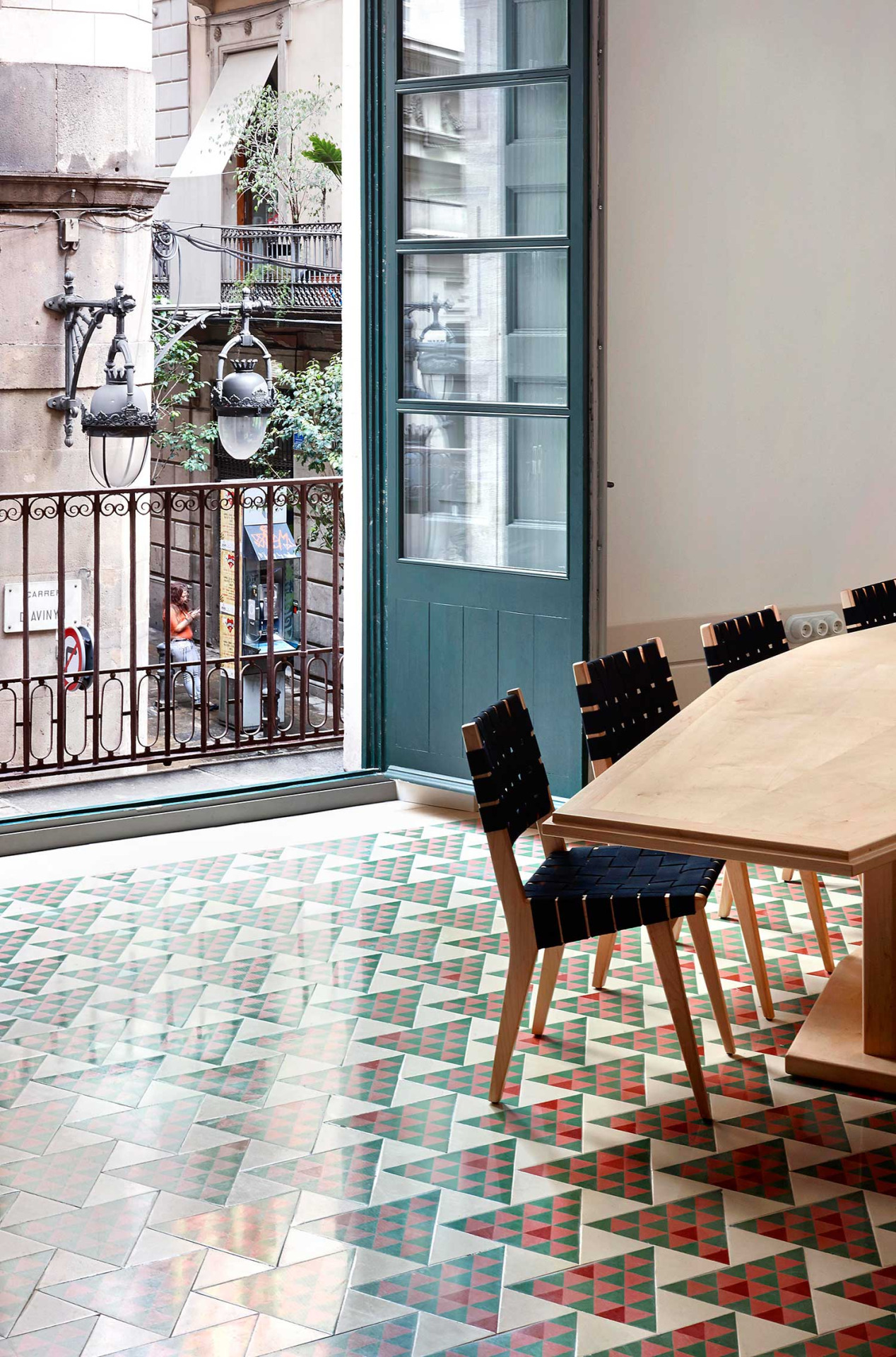 This interior is so dramatic and there’s so much to soak in, this subtle touch just passed me by. But look closer and sure enough – how brilliant. The colour change was designed to loosely define private and shared space – shared areas are where the tiling is most mixed. One section is more red, for one brother, the other more green for his sibling. Once again, genius. And the palette used is reflective of Catalan tiling, giving a nod to this apartment’s location. 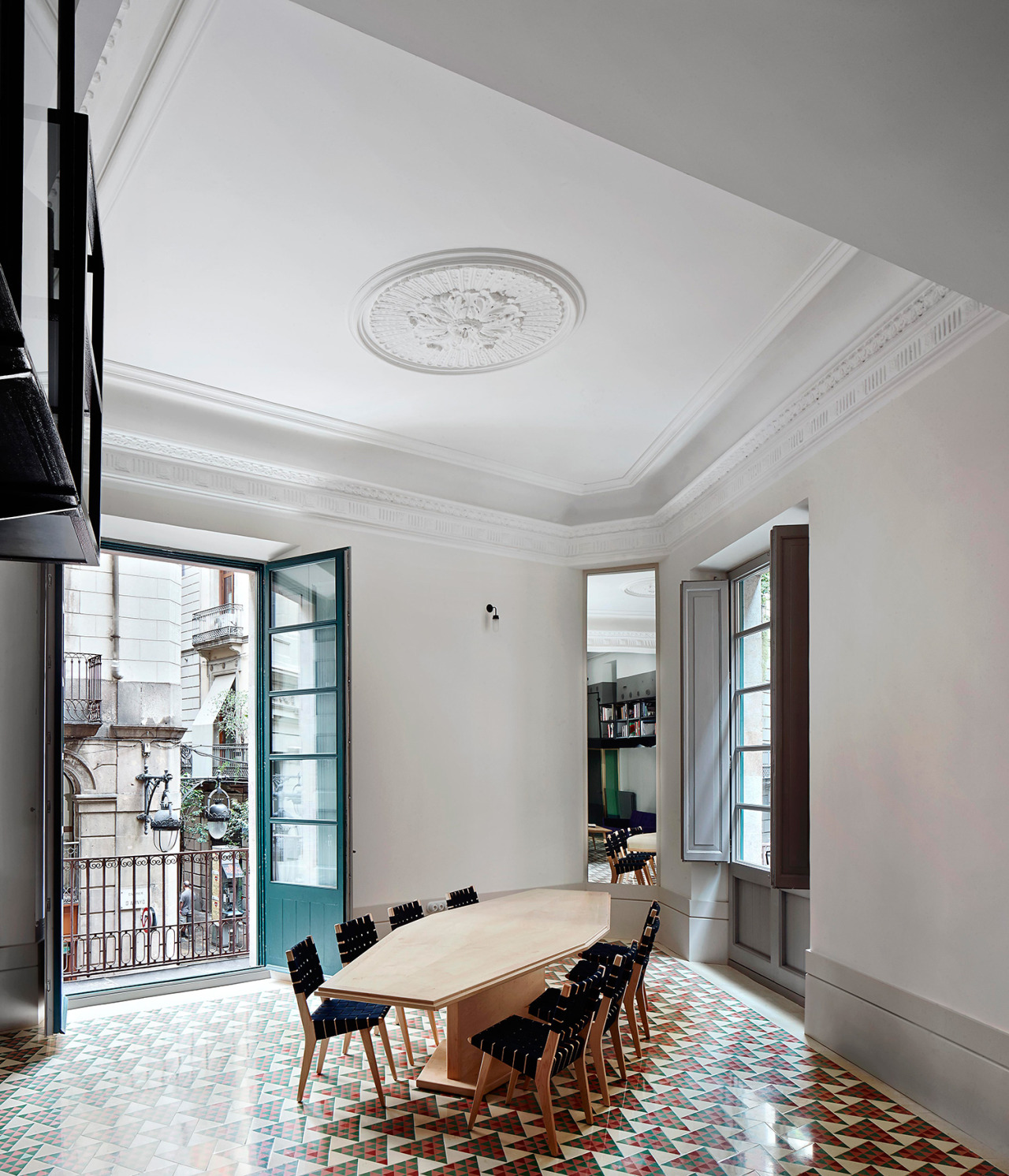 I’ll acknowledge that this space won’t be for everyone. One commenter on this post on Dezeen said: “Living with a floor like that would push me to see a psychiatrist!” But then, this is a second home. Maybe I couldn’t imagine living here every day either (oh hang on, I probably could!) but arriving here for a week or two (or more), this would be such an exciting and energizing space. And when you wanted to escape the pattern you could simply retreat into your timber-clad bedroom and close the louvers.