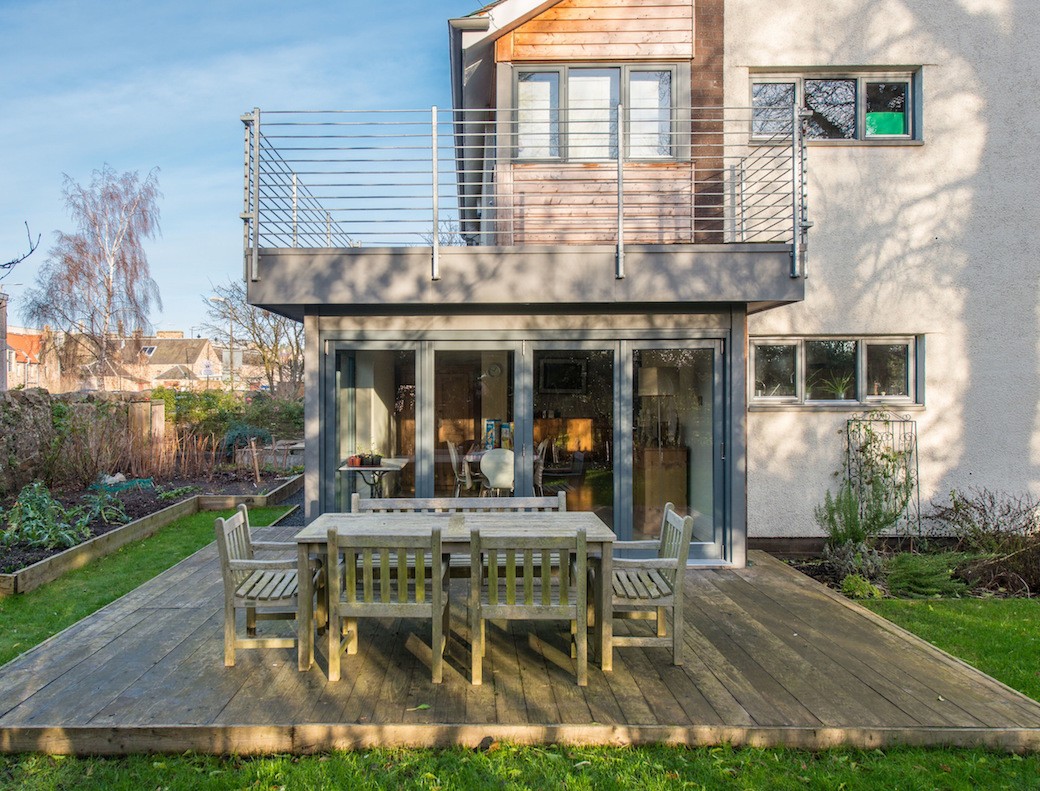 Some houses really are a revelation. Either they look like one thing from the exterior only to reveal an entirely different style once inside, or they’ve undergone such a transformation that the ‘before’ and ‘after’ comparison is unbelievable.

Park House falls into the latter category. When Ewen and Lottie Brown saw this property for sale after relocating from London to Scotland six years ago, it was a pretty unappealing 1970s house. The couple had moved north with the dream of living in the countryside and embracing a rural lifestyle. The Browns, who now have three children, Holly, Ronnie and Frank, initially rented a house in Haddington in East Lothian while looking for a place to buy, and soon realized how much they enjoyed living in the town. 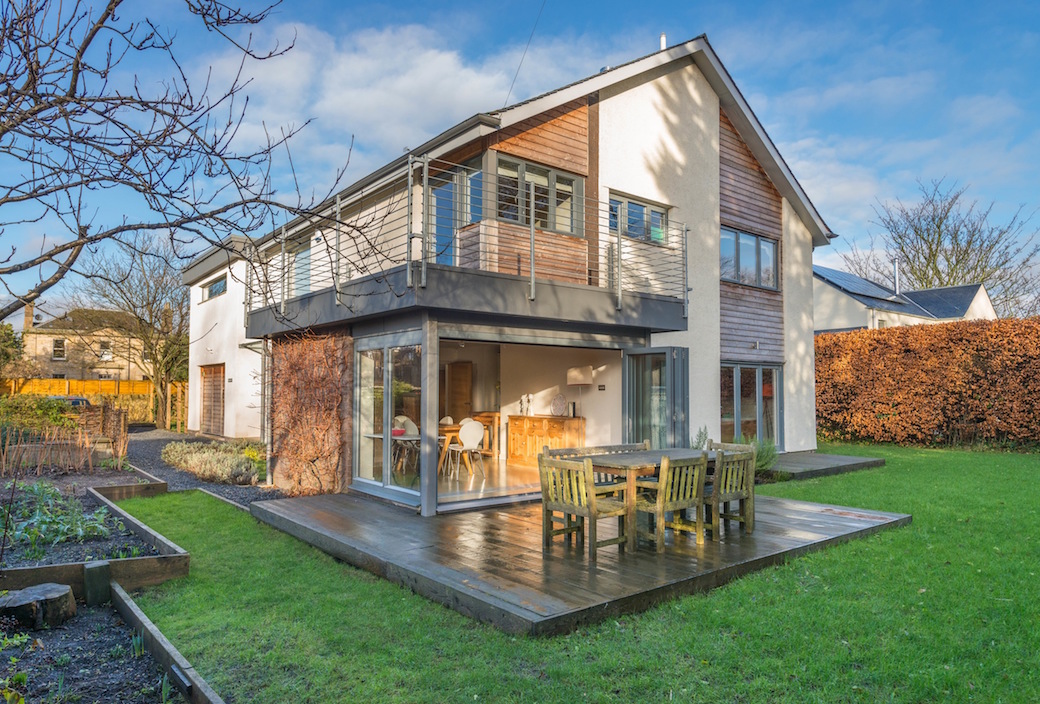 Lottie spotted this property for sale on Neilson Park Road, emailed the schedule to Ewen, and went to view the place on her own. “I liked it straight away as I could see we could do something with it, but Lottie took a bit of convincing,” Ewen acknowledges. The couple made their offer without Ewen even seeing the property as the location was great – the house, which is now on the market with Rettie & Co, sits at the end of a no-through road close to Neilson Park – and there was a timescale to consider as Lottie was seven months pregnant and they wanted to be settled into a family home. 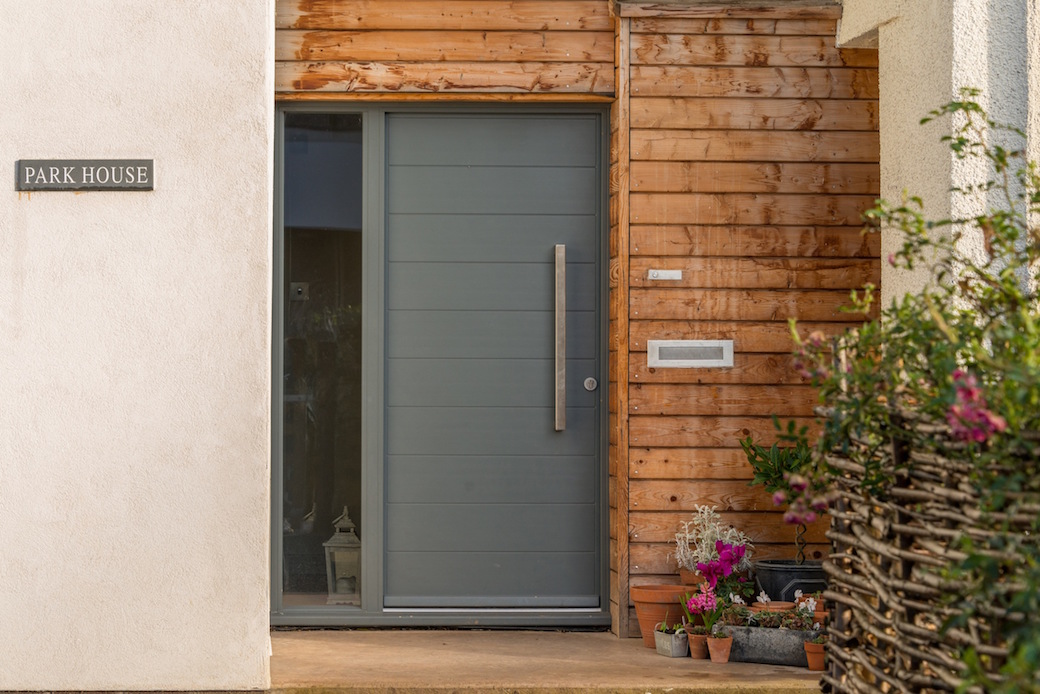 As Ewen says: “I’d always wanted a modern house, something free of draughts and comfortable to live in. This gave us the opportunity to create something modern with double glazing and high levels of insulation.”

Although the couple had tackled a previous project – splitting a cottage in two – the work required here was on an entirely different scale. Everything has been upgraded, including the new roof and windows. The existing exterior timber cladding (“nasty ’70s cladding,” as Ewen says) was stripped off and used for kindling, and replaced by Scottish Larch that will weather over time to a beautiful silvery tone. 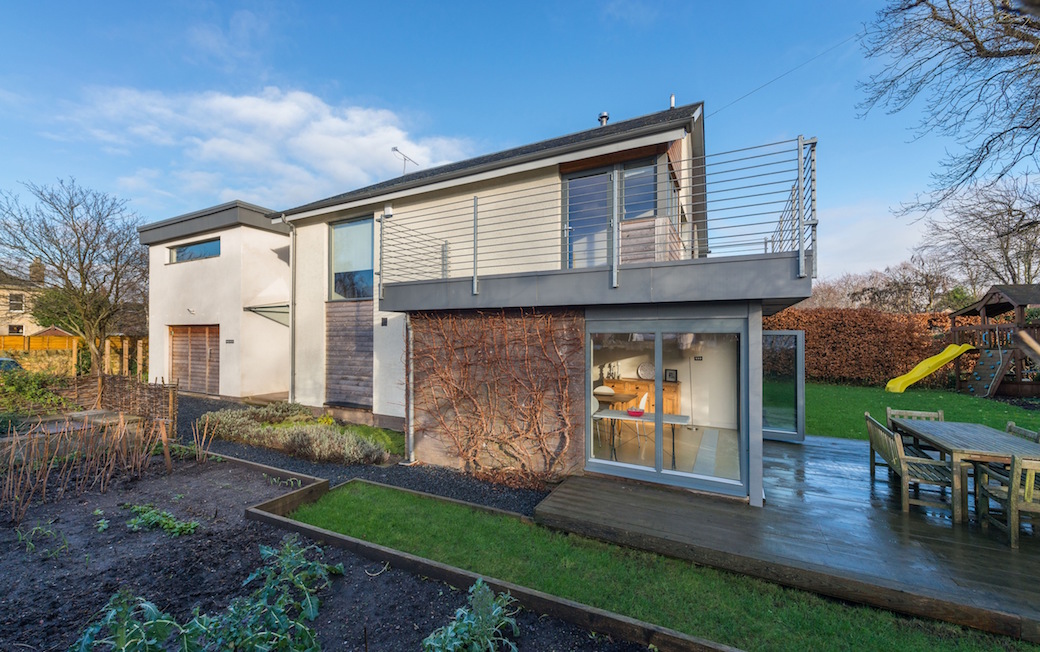 And the house has been transformed in scale. A double garage was removed and an extension was built to form a new garage and utility room with two bedrooms above. The house was also extended to create today’s open plan kitchen and dining room, and folding and sliding doors open from the latter onto a south-facing terrace.

“After we found the house our next thought was, what are we going to do with it?” Ewen recalls.  He downloaded software that enabled him to work on the floor plans and the new layout, exploring ideas for how the house could be opened up and made to flow. “The main change was to add the flat-roofed extension and reconfigure inside but I got stuck,” he says. “It wasn’t working and I couldn’t solve it.” 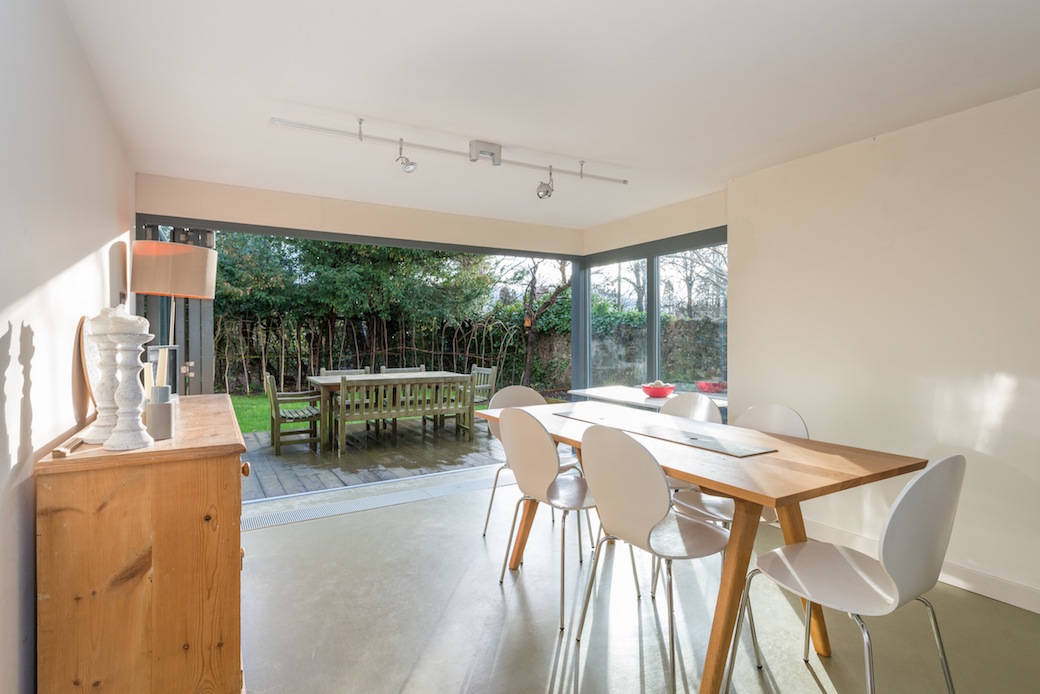 The couple turned to the Dalkeith-based architect Niall Young. “Niall moved the staircase inside and added a big window at the front, and suddenly it made sense,” Ewen says. Having bought the house in April 2010, planning permission was granted in October and work began on site straight away as Ewen and Lottie had already began discussions with the builders, Harvey Hosie, so there was no time wasted. The build did slow down that winter when central Scotland had its heaviest snowfall in years, but only by weeks, and the family moved into the completed house the following July. 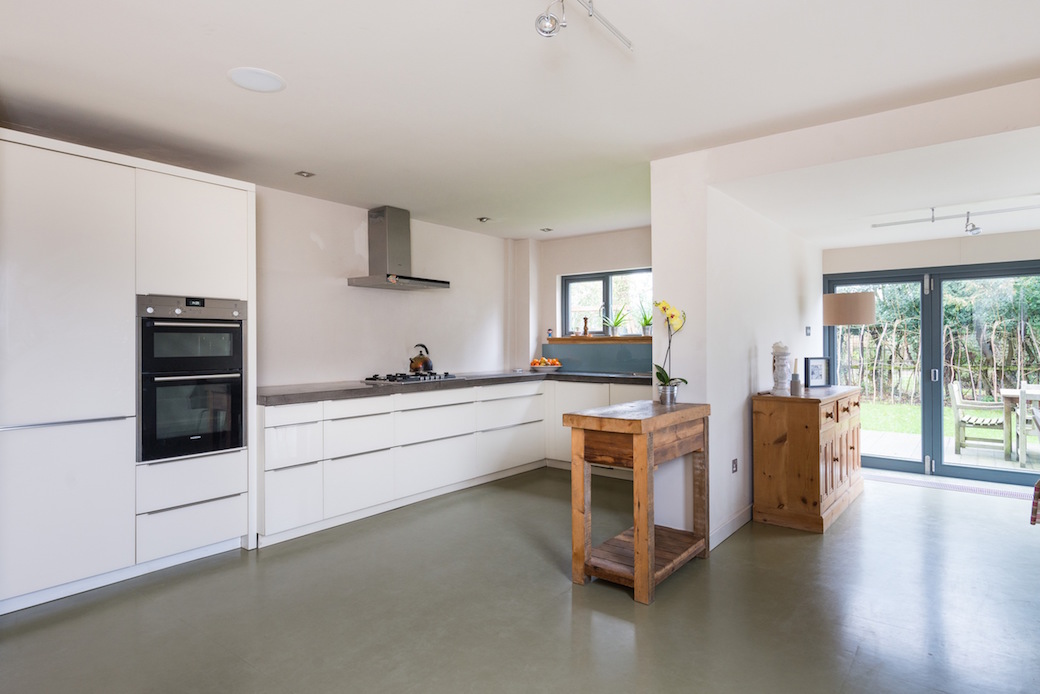 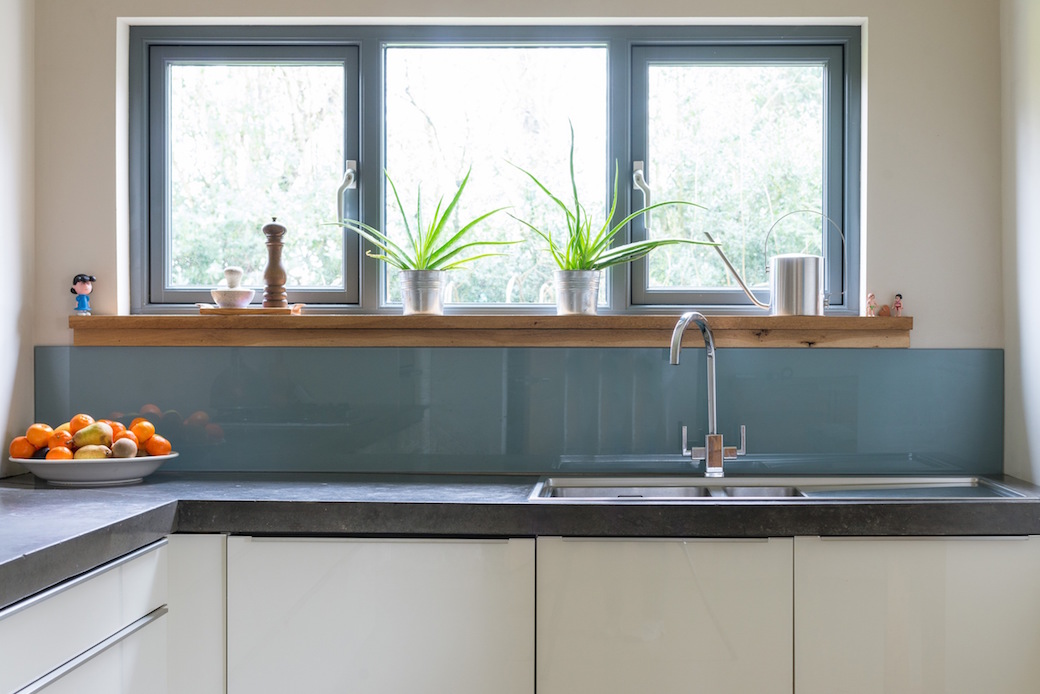 “We had a small team on site every day with specialists brought in as needed,” Ewen says. It helped that the Browns were able to continue living in their rental house nearby during the build, but there were still challenges as Ewen works in TV advertising and travels a lot, so he and Lottie, who is a florist (when in London she worked in the family business Longmans) would catch up on progress by phone.

When considering the palette of materials, Ewen took inspiration from other contemporary house designs he’d seen, choosing zinc exterior detailing rather than traditional lead and using rubber for the flat roof on the extension. The interior palette and fittings are just as contemporary. When designing the kitchen, the couple opted for a sleek white Rational kitchen and initially considered concrete flooring, but the finish wouldn’t have worked with the existing floor so they chose rubber instead, “which was by far the best decision as it’s great for the kids,” Ewen says. 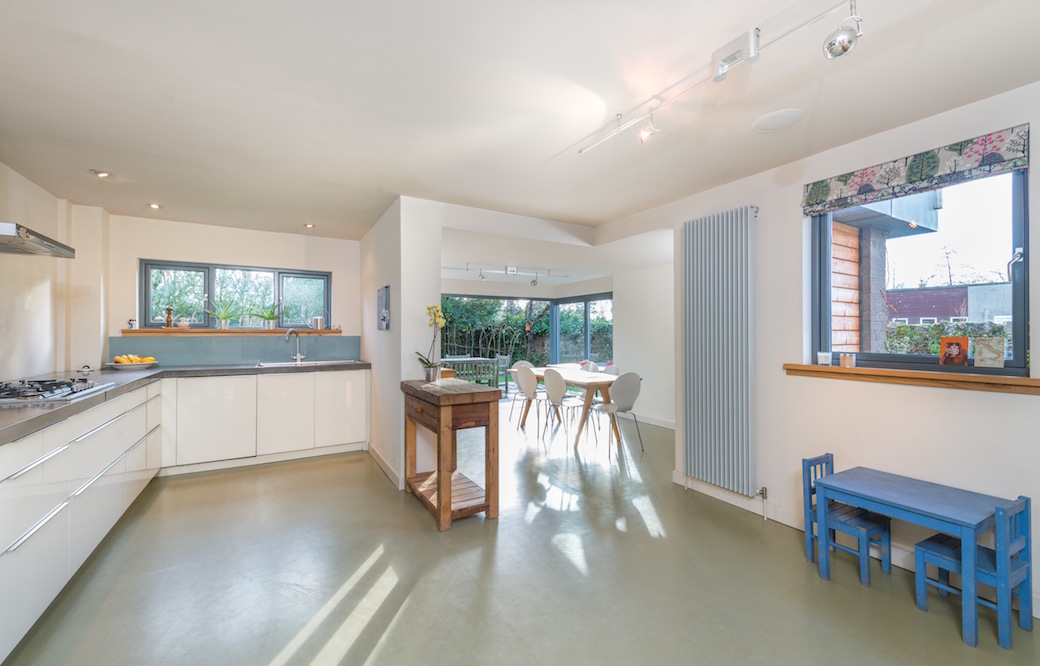 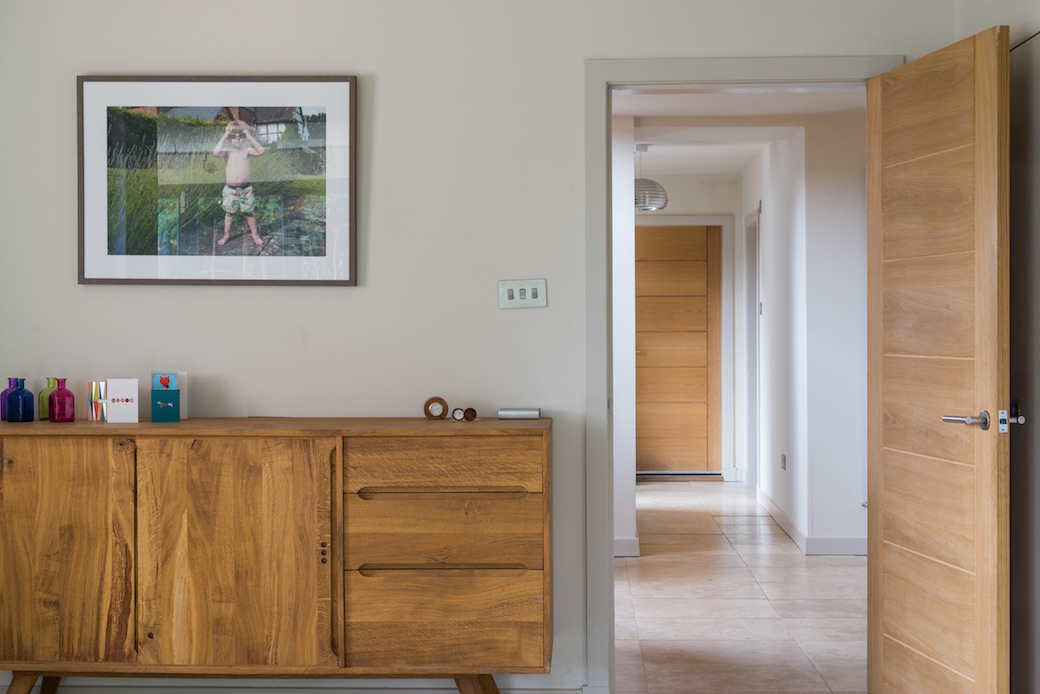 From the outset the couple were committed to creating a sense of craftsmanship in their new home, and Ewen credits a skiing trip to Norway as the inspiration between their approach. “We saw all these buildings with lovely timber,” he says. “A nice piece of wood on an old barn looks fantastic because it’s a nice piece of wood. Everything we saw there was quality, so that inspired us to have solid oak floors and doors, and to have stainless steel fittings everywhere rather than chrome, from the hinges to the door handles – everything.” 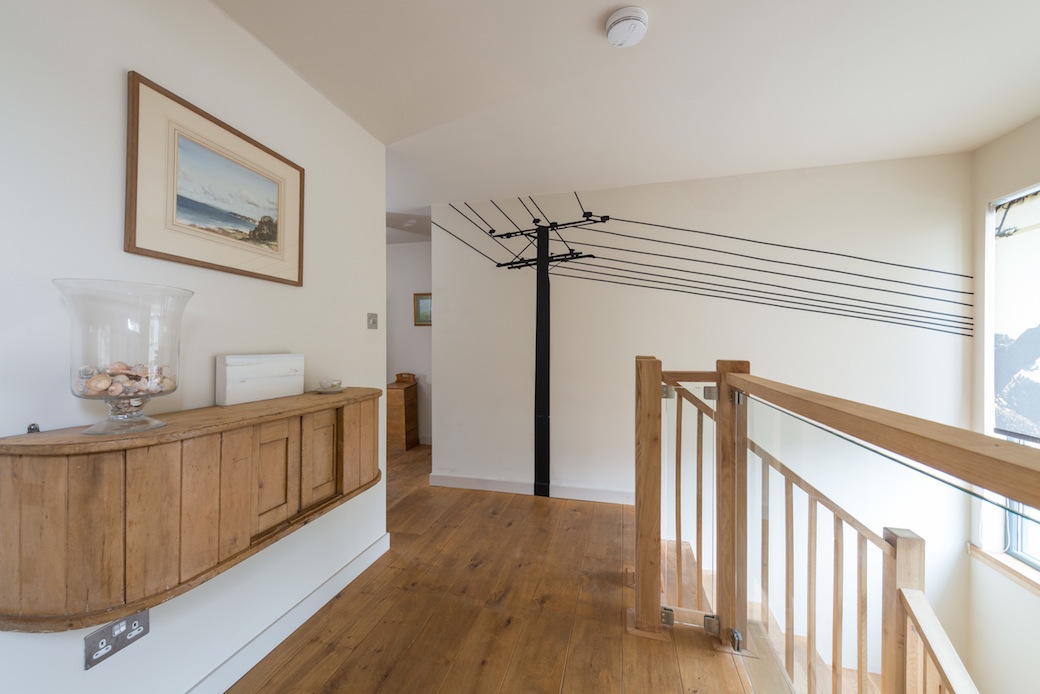 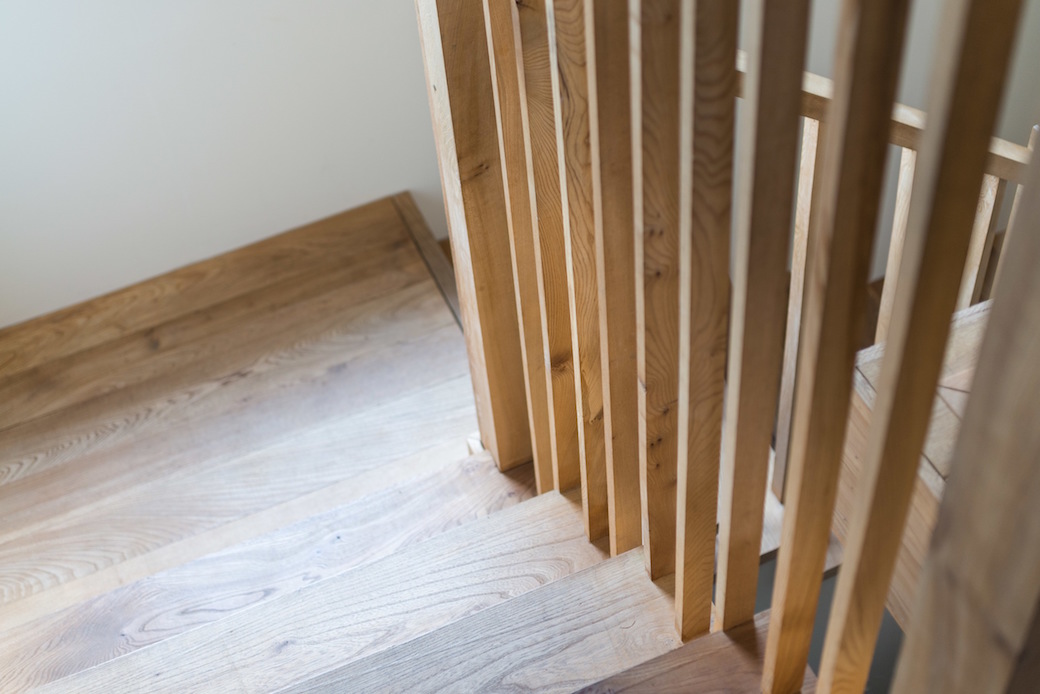 The couple worked closely with the builders on the many bespoke elements of the interior, from the elm staircase to the bathroom that features extensive iroko panelling. “Our builders recommended the placement of the different fittings so we had those boundaries to work with, and then Lottie and I drew up the design,” Ewen says of the latter. “We wanted storage built in and a long bath with concealed taps. It seems really simple but we spent weeks on it.” 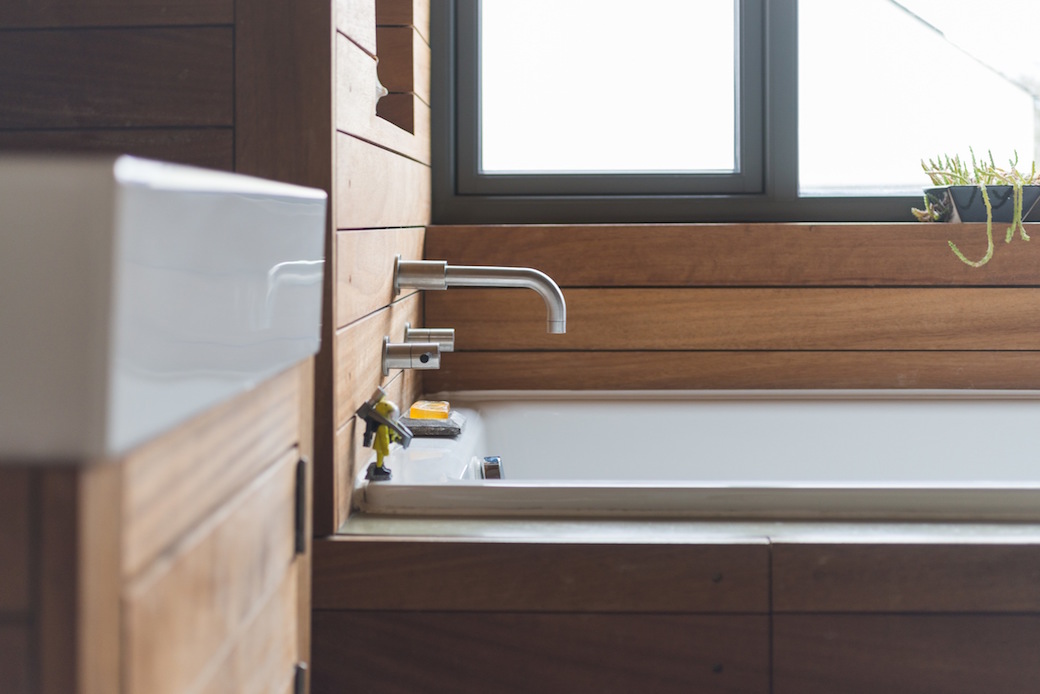 And the quality is also evident in the fittings, from the Lefroy Brooks showers to the Danish Hwam woodburning stove in the living room – another favourite feature. “We were staying in a friend’s house, a house our friend had been renovating, and he made the point of not buying the cheapest things because they break and you end up having to replace them, so we decided to bite the bullet here,” Ewen says. 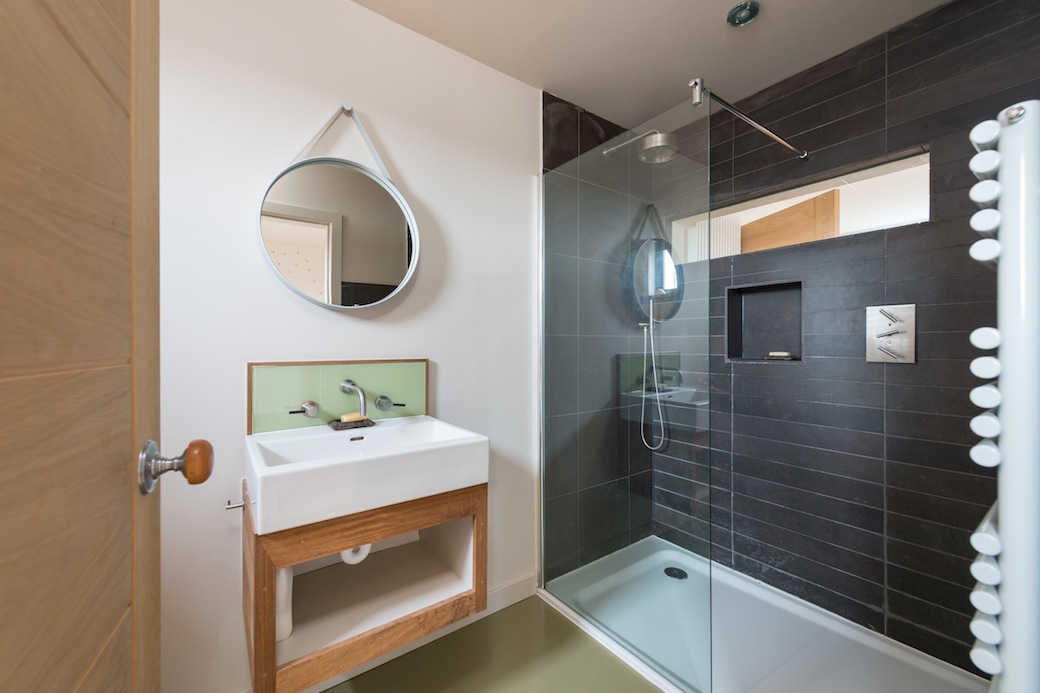 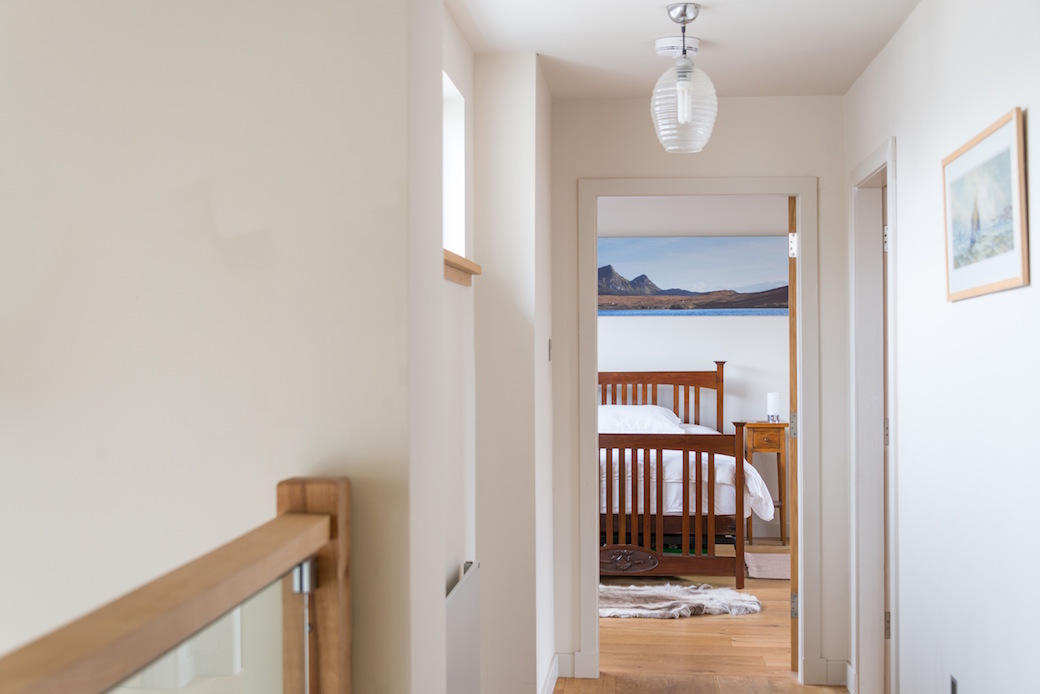 The indoor-outdoor flow is one of the highlights of Park House, and again this was central to the couple’s approach. “With three children, we wanted a kitchen that we could cook and live in, and where we could move easily between the dining table inside and the table on the terrace outside,” Ewen says. “And this extension faces south into the garden, so we’re getting lots of light.” There’s also a wraparound balcony above the dining extension – this is accessed from the guest bedroom – and the sitting room has bi-fold doors opening into the garden. 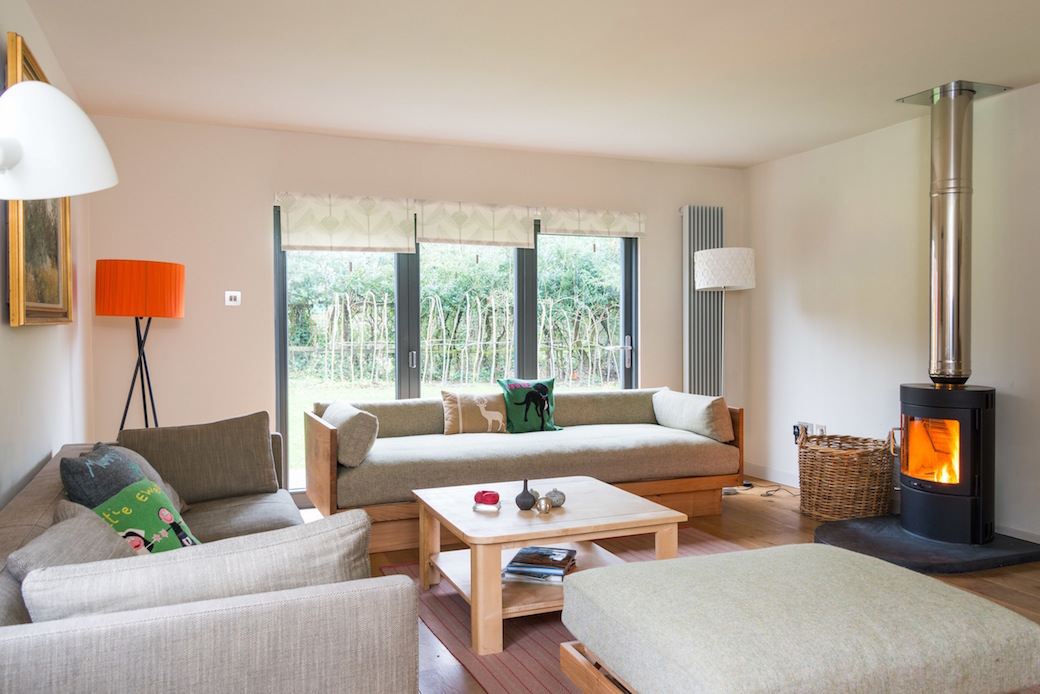 With five bedrooms upstairs – and the potential for a sixth on the ground floor where there’s a currently a study – and a floor area of just over 3,000 sq/ft, it’s remarkable just how much space Lottie and Ewen have created here. “We’ve had so many compliments from people who knew the original house,” Ewen says. So why move?

That dream the couple had about living in the country and embracing a rural lifestyle? That’s the next plan, Ewen says. “We’d love to do another project if we can find one,” he acknowledges. “I still like everything about this house; I enjoy the quality of it all.” 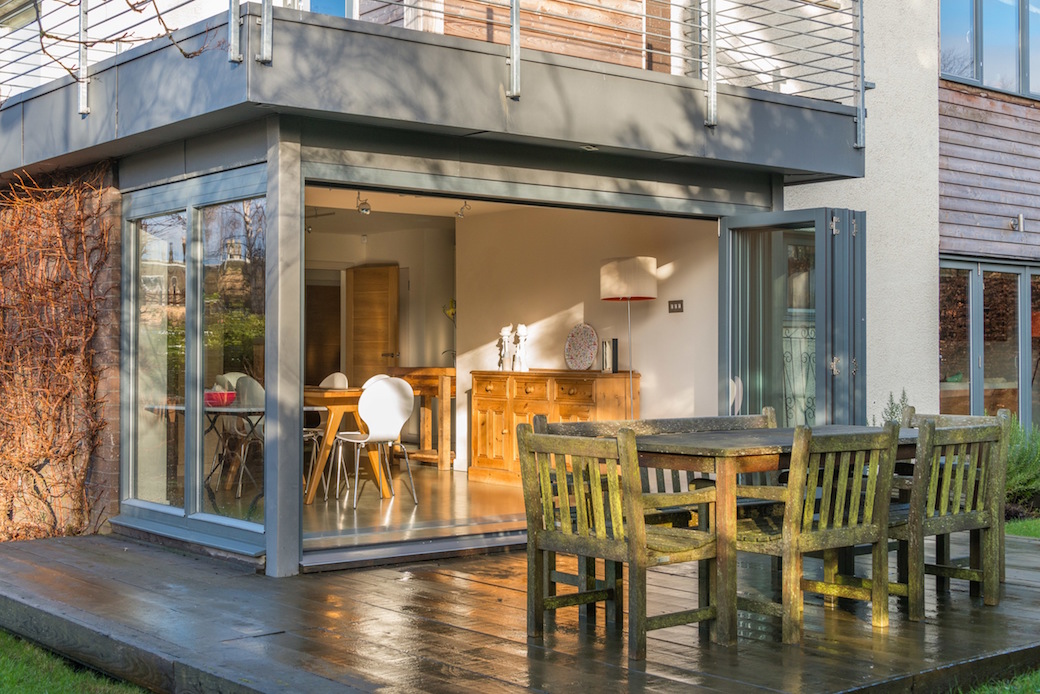 Park House is on the market with the Edinburgh estate agents Rettie & Co.

All photography by Exposure, via Rettie & Co.