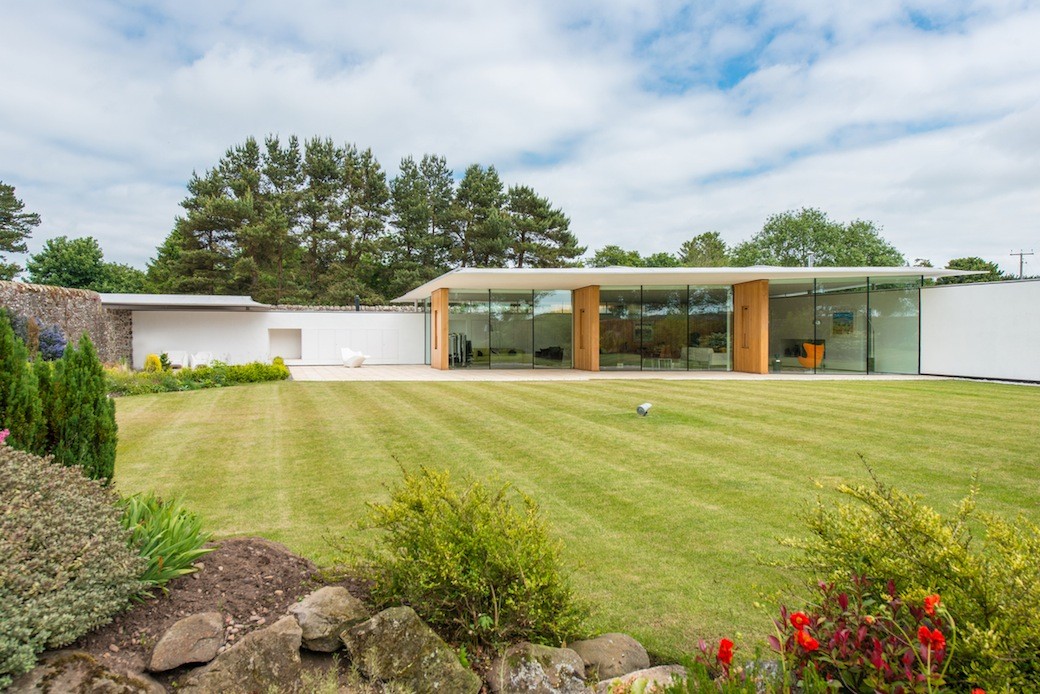 “I’d never been to Scotland; I’d always wanted to visit but had never done it,” says Ian Lillicrap as he reflects on the chance find that led him to buy a home here in 2008. “One Friday I was reading through a newspaper property section and I saw a photo of this house, of the main south elevation, and thought, ‘I love the architecture of that! Where is it?'”

The Duncan House is one of those properties that makes you stop and look. There’s the striking architecture with the extensive use of glass and the dramatic sweeping roofline; the giant boulders integrated within the external landscaping as you approach; the contemporary interior style with its beautifully crafted timber detailing; and the setting within a historic walled garden – any of these elements might make you stop, but put them all together and you have a very distinctive and unique home. 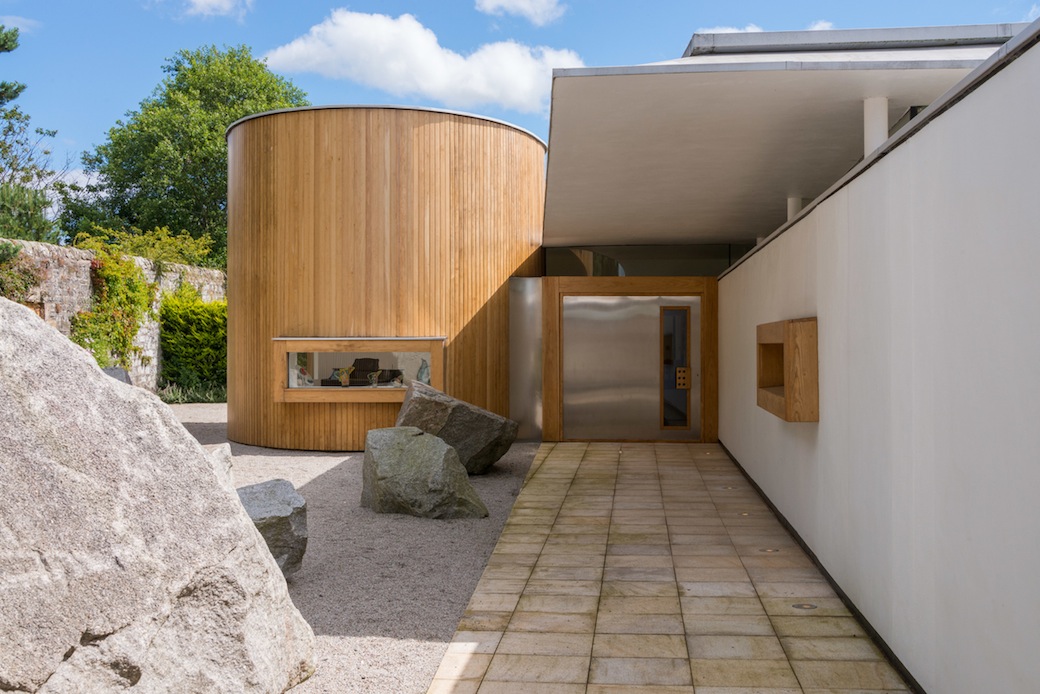 Back in 2008, Ian was looking for a second home in Leicestershire, where he grew up. Ian is co-founder of the Cornwall estate agent Lillicrap Chilcott, so he sees his fair share of properties through his professional life and it takes something really special to stand out.

The Duncan House, which is now on the market with joint selling agents CKD Galbraith and The Modern House, is situated at Ladybank in Fife, just sixteen miles from St Andrews. This was hardly Ian’s target location, but then, as he says: “This house was to die for.” And, he reasoned, why not have a home in a new locality that he hadn’t explored. As he says: “I can be on a 7am flight from Exeter to Edinburgh and be sitting in Starbucks in the city centre at 8.30am.” Going direct from Edinburgh Airport, it’s about an hour’s drive to Ladybank. 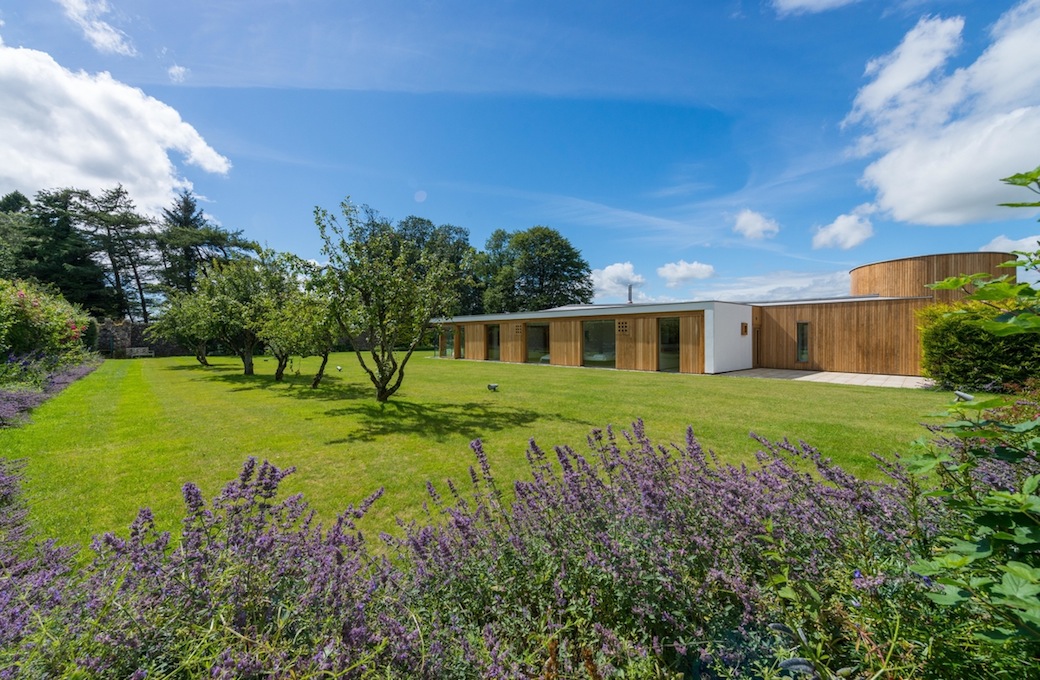 The Duncan House was built in 2002 and was designed by one of the UK’s most respected architects, Gareth Hoskins OBE. In recent years Hoskins Architects has designed a number of headlining projects including the redevelopment of the National Museum of Scotland in Edinburgh, and the practice’s ongoing work is no less exciting, from projects at the World Museum in Vienna to a new home for the National Theatre of Scotland in Glasgow.

The Duncan House was the first private home Hoskins’ designed after starting his practice. The house sits within the former walled fruit garden of Kinloch House, and although there are neighbouring properties, this building is tucked privately behind its historic walls. As Ian explains: “The original owner liked the architecture of Mies van der Rohe and wanted to have a house that was reminiscent of the Barcelona Pavilion” – a building Ludwig Mies van der Rohe designed as the German national pavilion for the 1929 Barcelona International Exhibition. 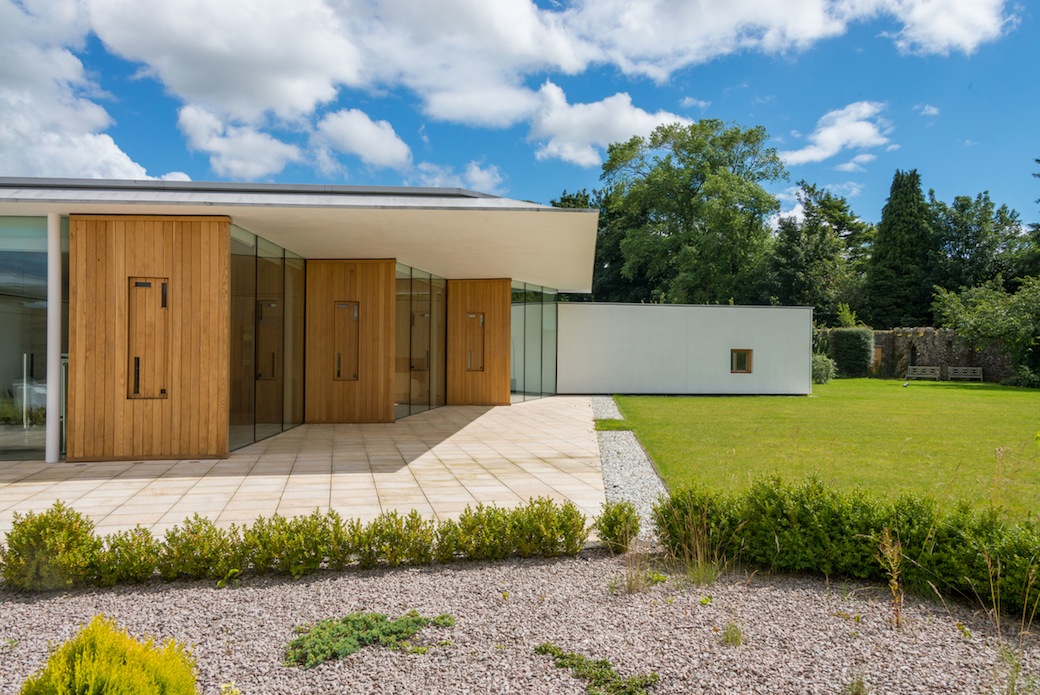 Hoskins has written this of the house: “The plan of the house is defined by two thick, white rendered masonry walls that contrast with the grey whinstone of the existing garden walls. These walls emphasise connections between old and new, inside and outside. Daylight is maximized by almost half of the external walls being glass… The main spaces are clean and uncluttered, with their main focus on the garden.” 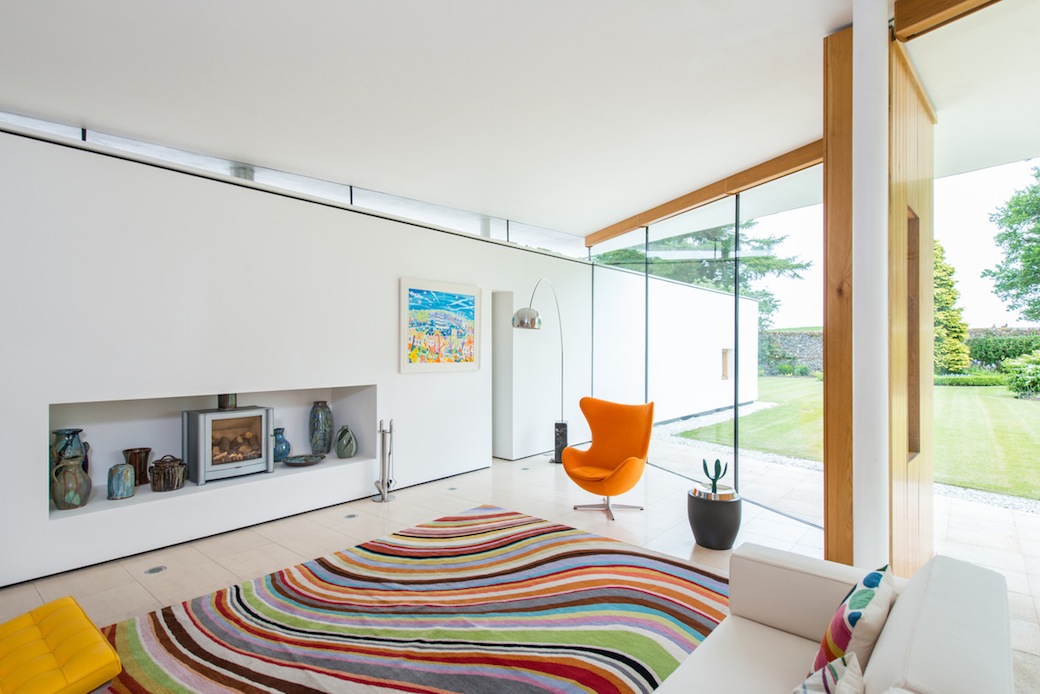 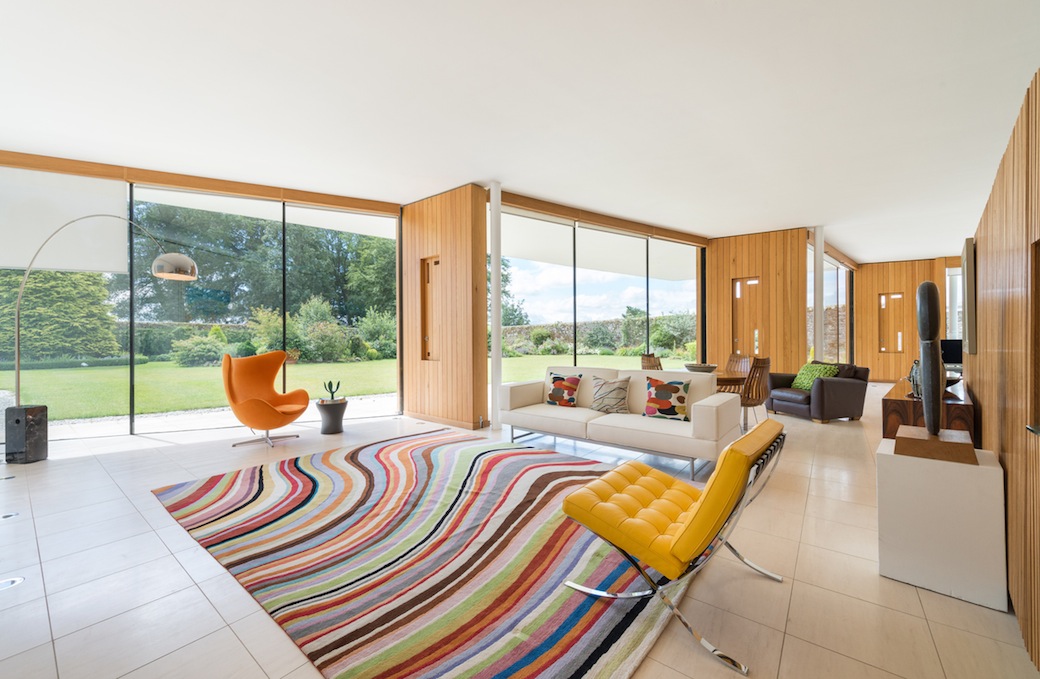 Ian recalls his first visit here. “I’m a stickler for quality and intricate detail,” he says, “and the second I walked through the front door and saw the quality of the finish, I knew this house was mine.”

The house has two distinct zones: the main reception room that extends to a staggering 47ft and incorporates seating, dining and kitchen areas, with entirely glazed elevations on the south and west; and the bedroom wing, which extends along the east elevation, with three bedrooms, including the master suite. 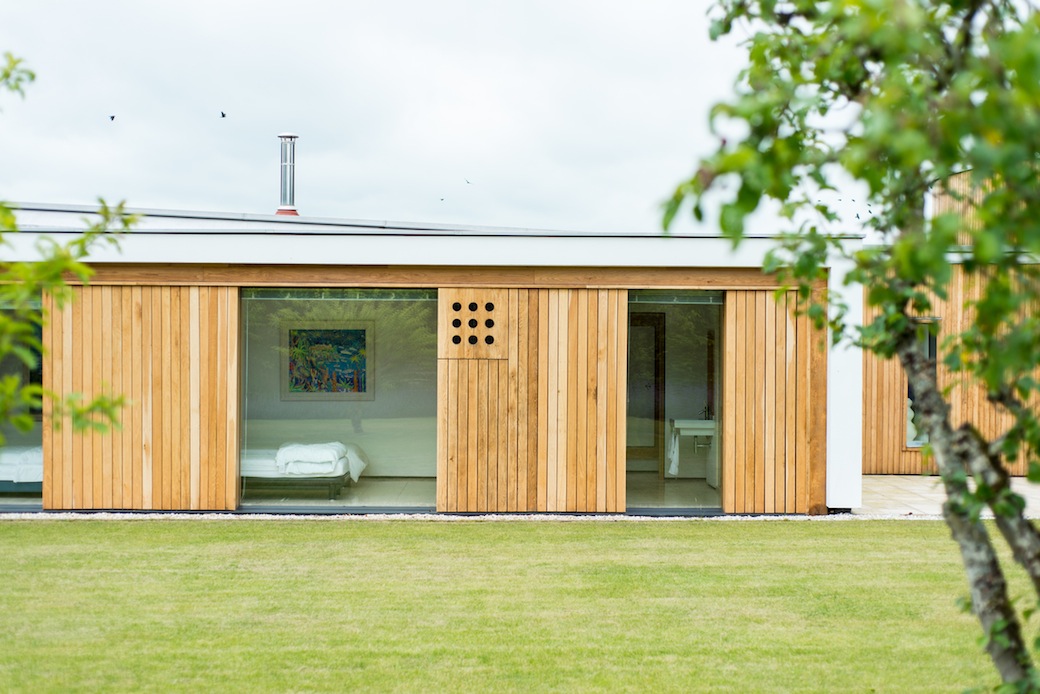 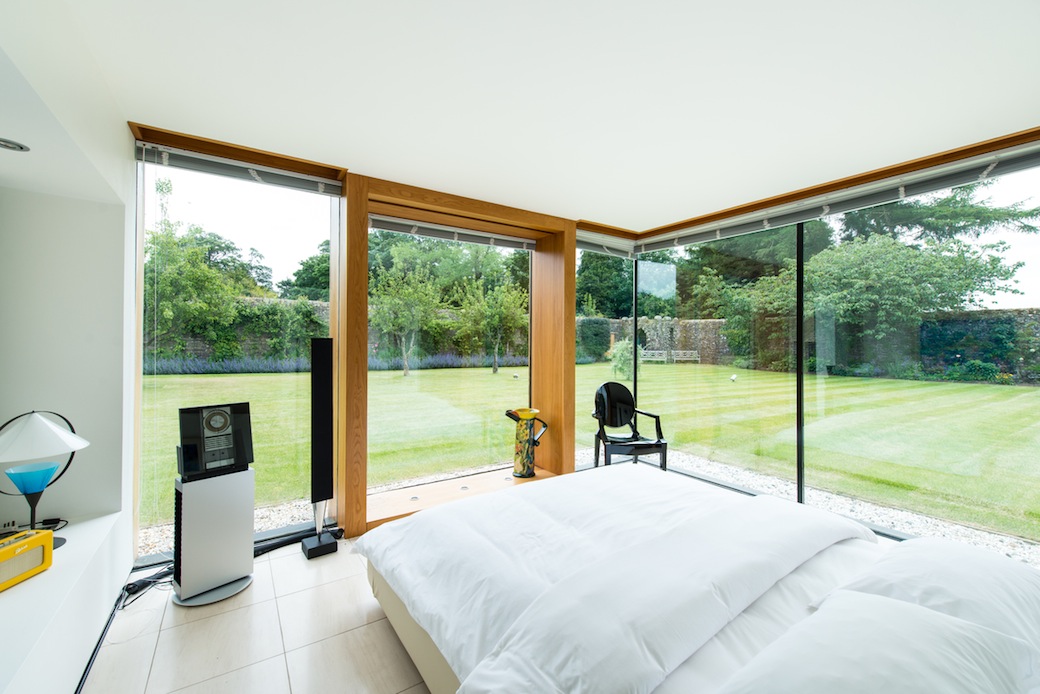 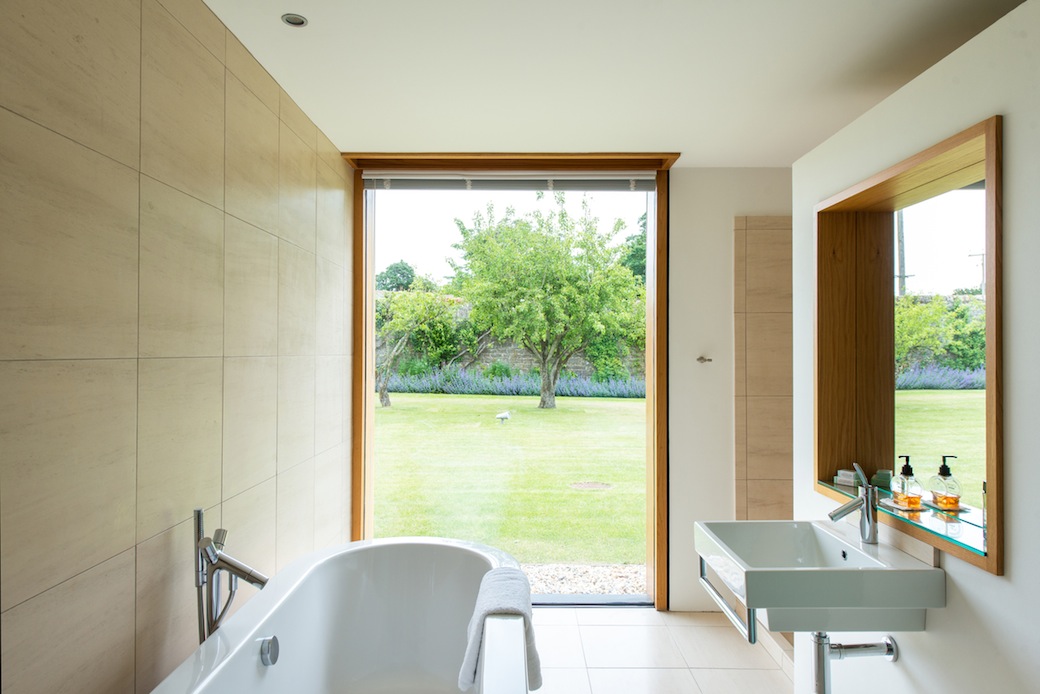 The reception hallway joins these two elements and leads to the oval drum room: a soundproofed music room with a glass skylight, and with a low-level boxed rectangular window – a design that has created the perfect acoustic environment. Externally, this section is clad in oak, and oak cladding frames the ground-to-ceiling windows in the bedroom wing, while the living section is defined in crisp white render with a dramatic extended roofline that provides a deep overhang, shading the glazed elevations. 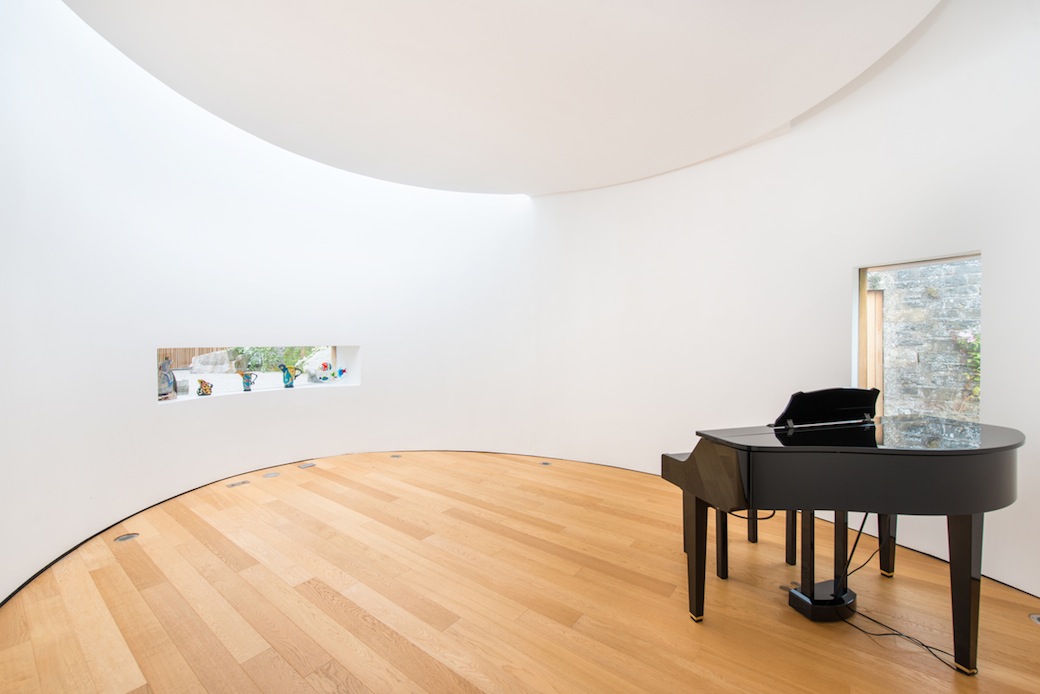 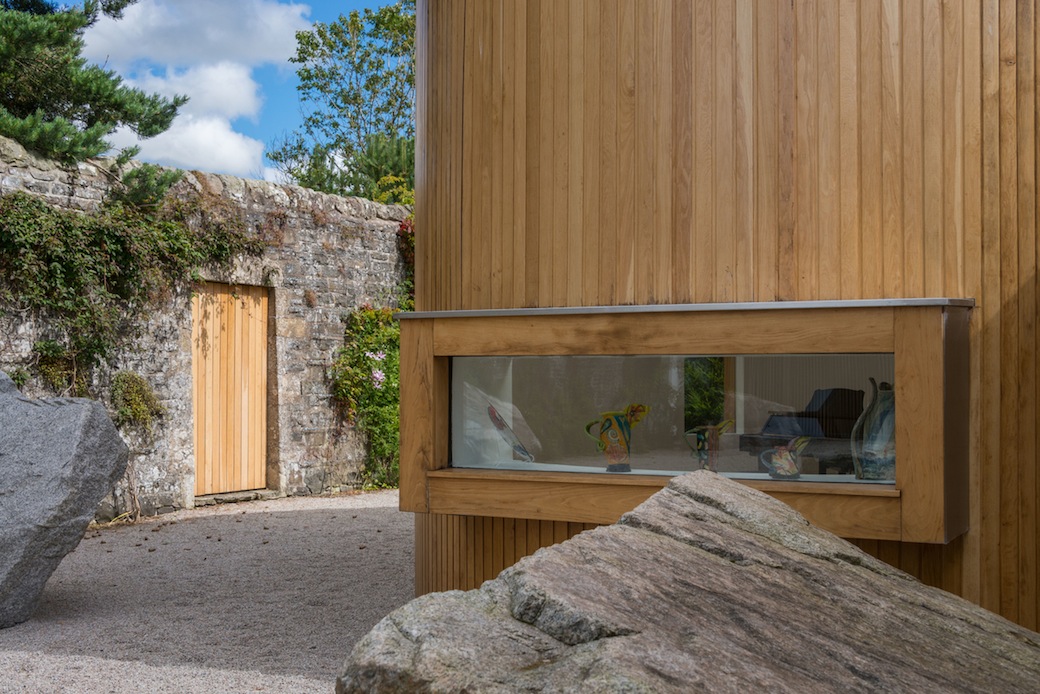 “When you look at photos, you see the main broad sweep of the design,” Ian reflects, “but the more time you spend here, you more you notice the detail: the way the glazing subtly slopes, or the ceiling in the main reception room that slopes in two directions like the wing of a plane. There’s a clerestory on the north and east sides that subtly makes it look like the roof is floating. And the edge of the roof looks wafer thin, again like the wing of an aeroplane.” 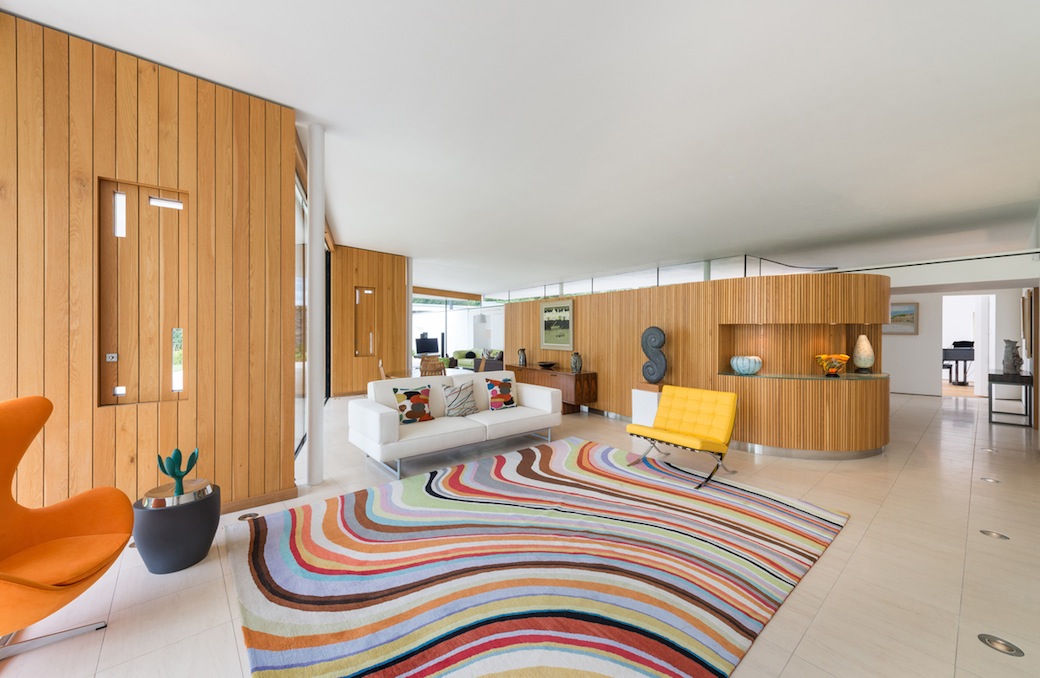 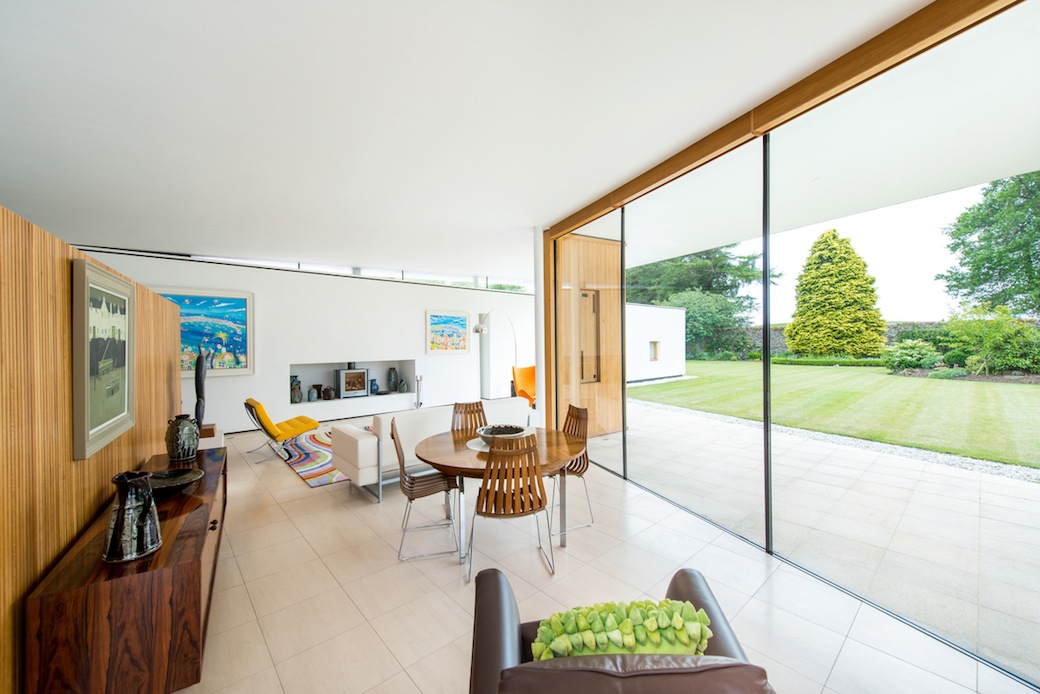 “There’s such clever joinery in the bedroom wing,” Ian continues. “The oversized bespoke oak doors have a panel beside them that makes the doors look even more imposing, only you don’t realize the effect of this detail until you spend time in the house. There are shadow gaps instead of skirtings, and also around the door frames, and the door leading into the drum room is about 1ft thick and has been very subtly curved to match the shape of the room.” 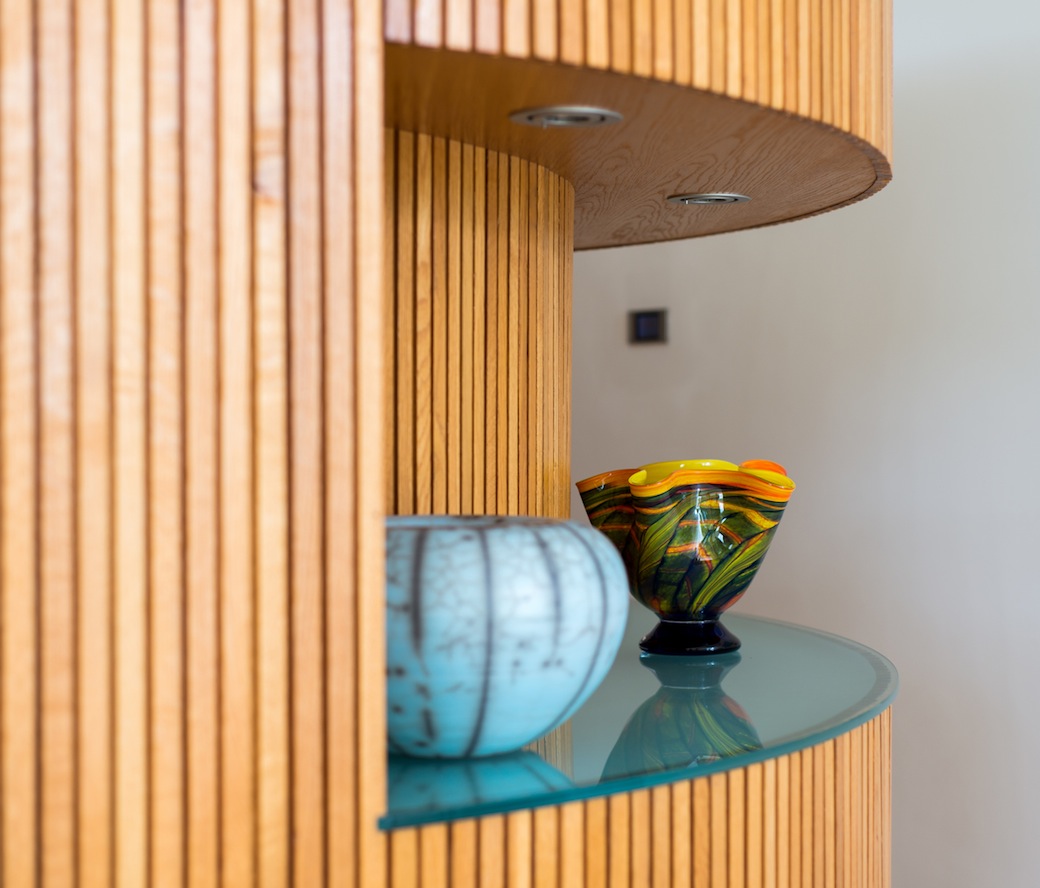 The original owner also turned to a local furniture maker Max McCance who constructed the hinged oak panels that separate the full-height windows in the main living space, forming doors to the garden, and McCance made other timber features throughout the house. There’s integrated Lutron lighting, and there’s also lighting throughout the garden and illuminating the massive boulders as you approach up the drive. 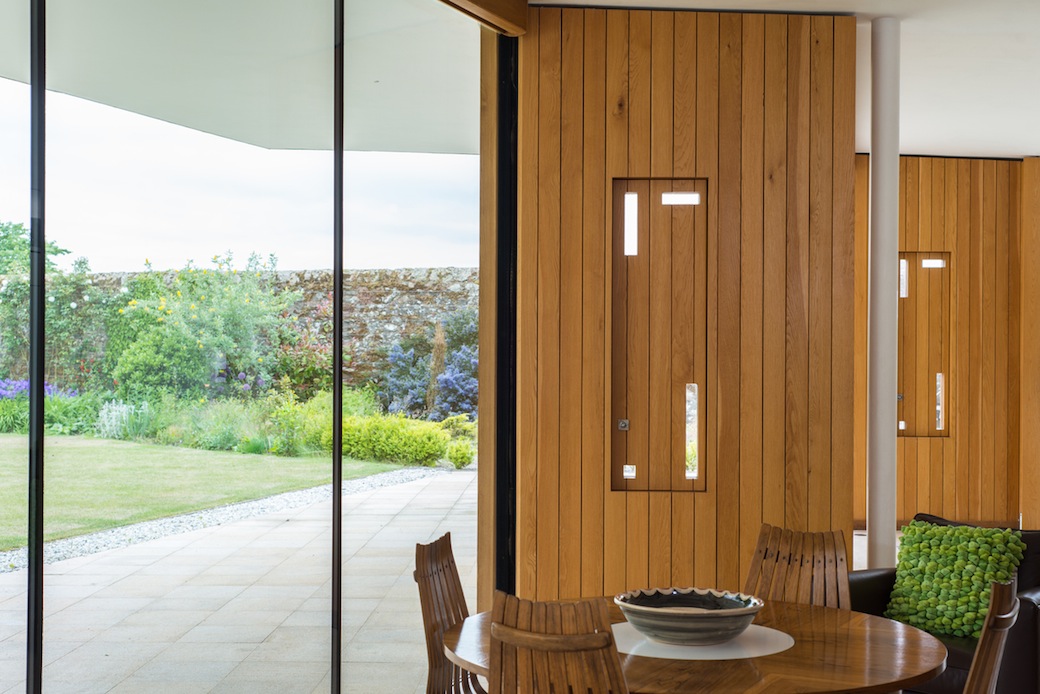 Every detail in this house has been as carefully considered and refined. Ian has also invested significantly in the property since he arrived – although you wouldn’t realize this, which was the point as the improvements Ian made look original. “The weather had taken its toll on the oak cladding and the right product hadn’t been used on it from the start, so this was sanded and refinished and sealed,” he says. To achieve this, much of the cladding was removed by the contractor, Stuart Niven & Sons from St Andrews, and taken to their workshop to be treated before being reinstated. 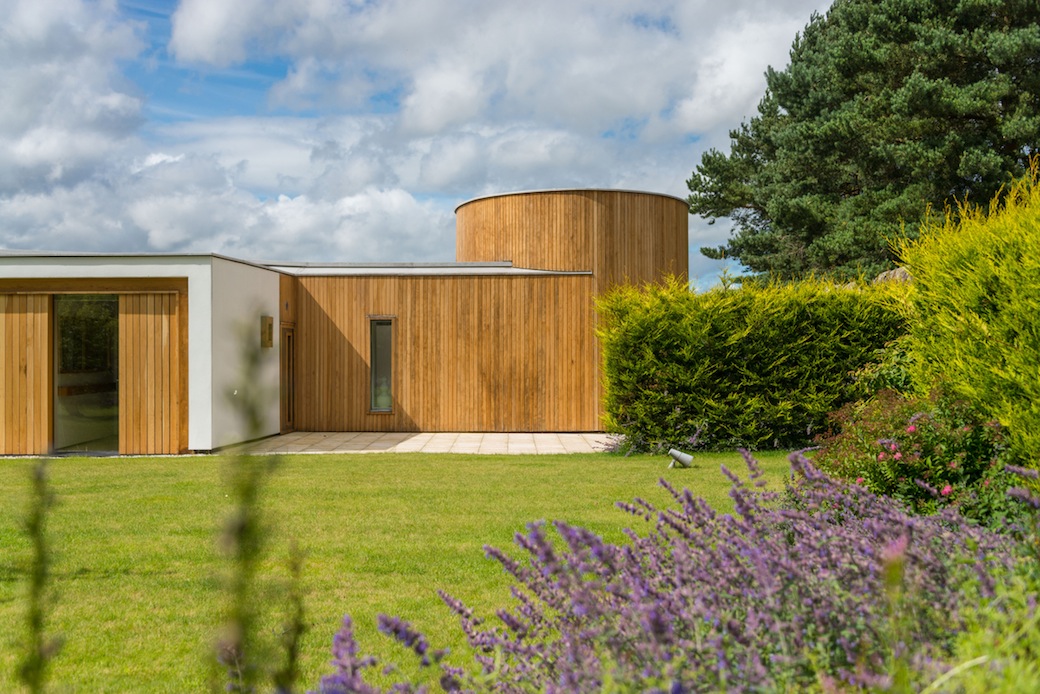 The internal flooring is limestone – other than in the kitchen and drum room which feature oak flooring – with underfloor heating throughout. Originally this limestone had continued outside on three sides of the house, with a broad terrace on the south side, but this material hadn’t fared well with the cold weather. Having used granite when creating terraces areas on another house, Ian specified the same finish here only in the same colour as the limestone. “Originally, all the lines in the tiles had extended through the windows from inside out, so the contractor had to cut a few millimetres of each slab of granite to replicate this,” Ian explains. 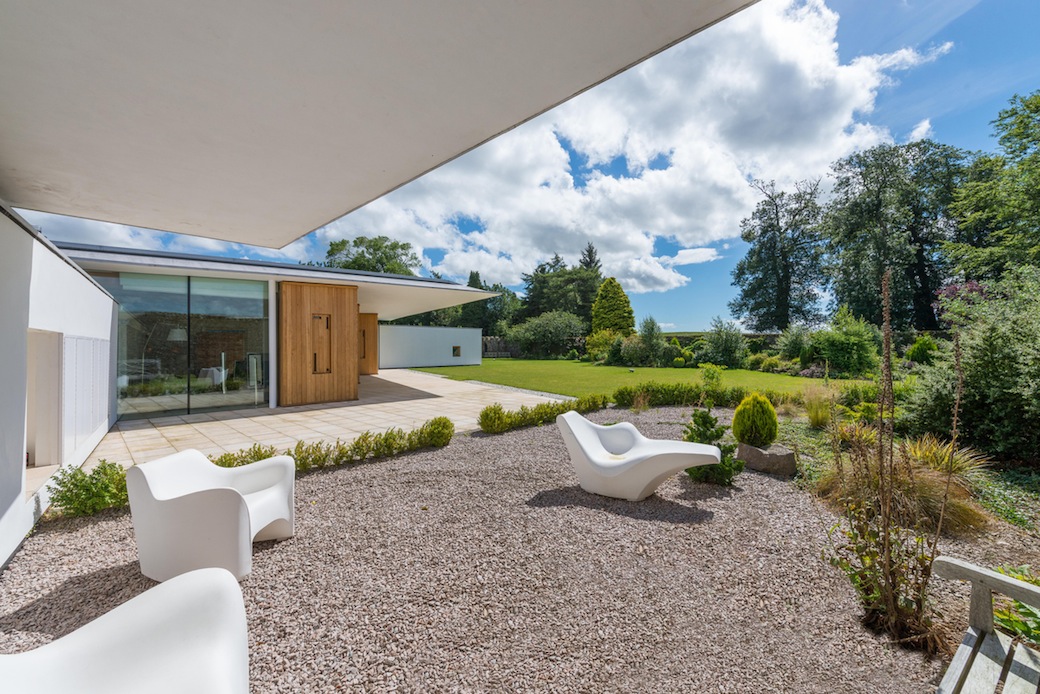 Ian also transformed the garden. “When I arrived the garden was simply lawn, so you had the contrast between the architecture and this green carpet and the wonderful stone walls,” he says. “But I love gardens, so I had this professionally planted over a period of four years, and the company I used brought in an expert on herbaceous borders.” The new elements have been seamlessly integrated with the original fruit trees, while those stone walls are now lined with climbing plants. 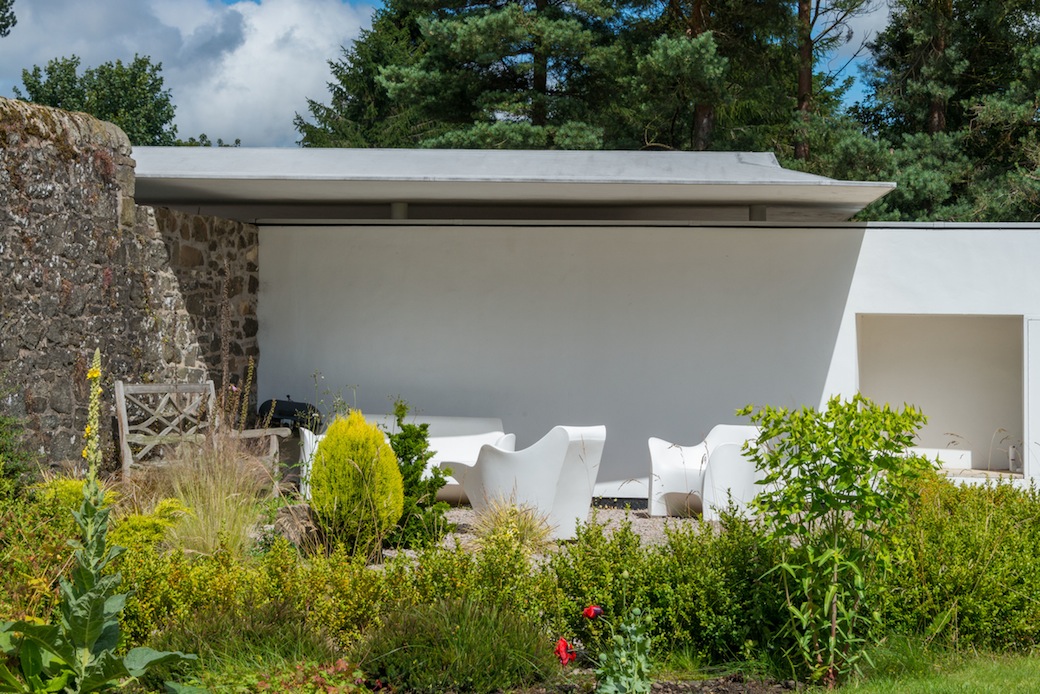 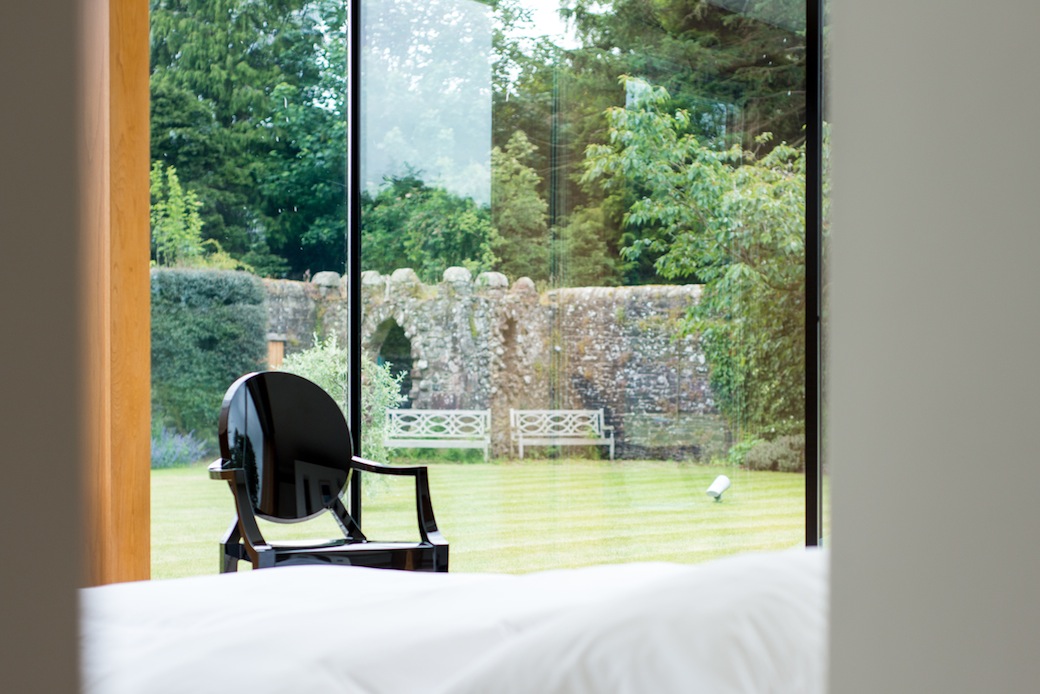 Ian brought a few existing pieces to the interior, but then it naturally evolved. “I hung some colourful paintings by the Falmouth artist John Dyer and then added the Paul Smith rug,” he says, and the palette was inspired by this colour spectrum. Ian worked with an Edinburgh interior designer to choose additional pieces of furniture and, as he says, “I can’t drive through Crail without visiting Crail Pottery and buying more.” 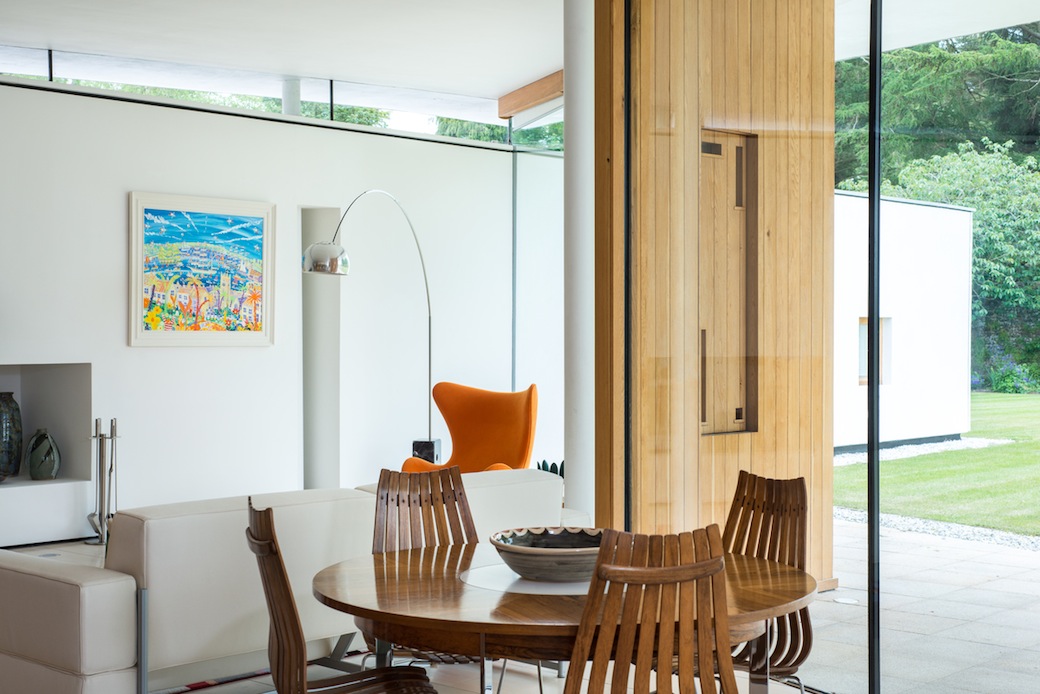 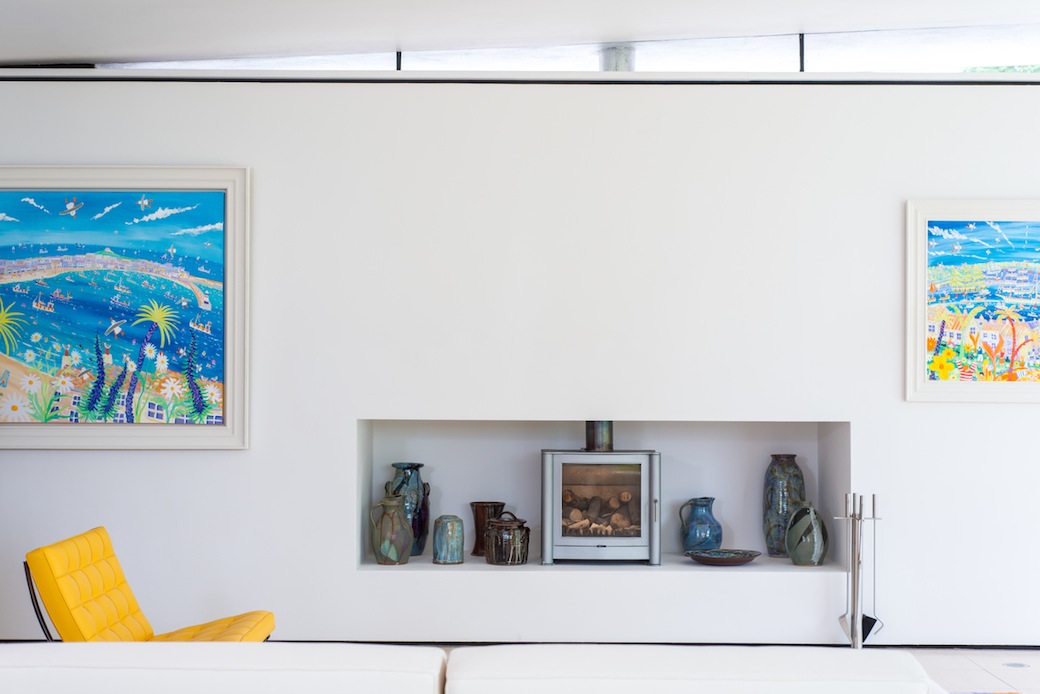 The Duncan House is being marketed by joint selling agents CKD Galbraith and The Modern House.

Photography by Exposure, via CKD Galbraith.