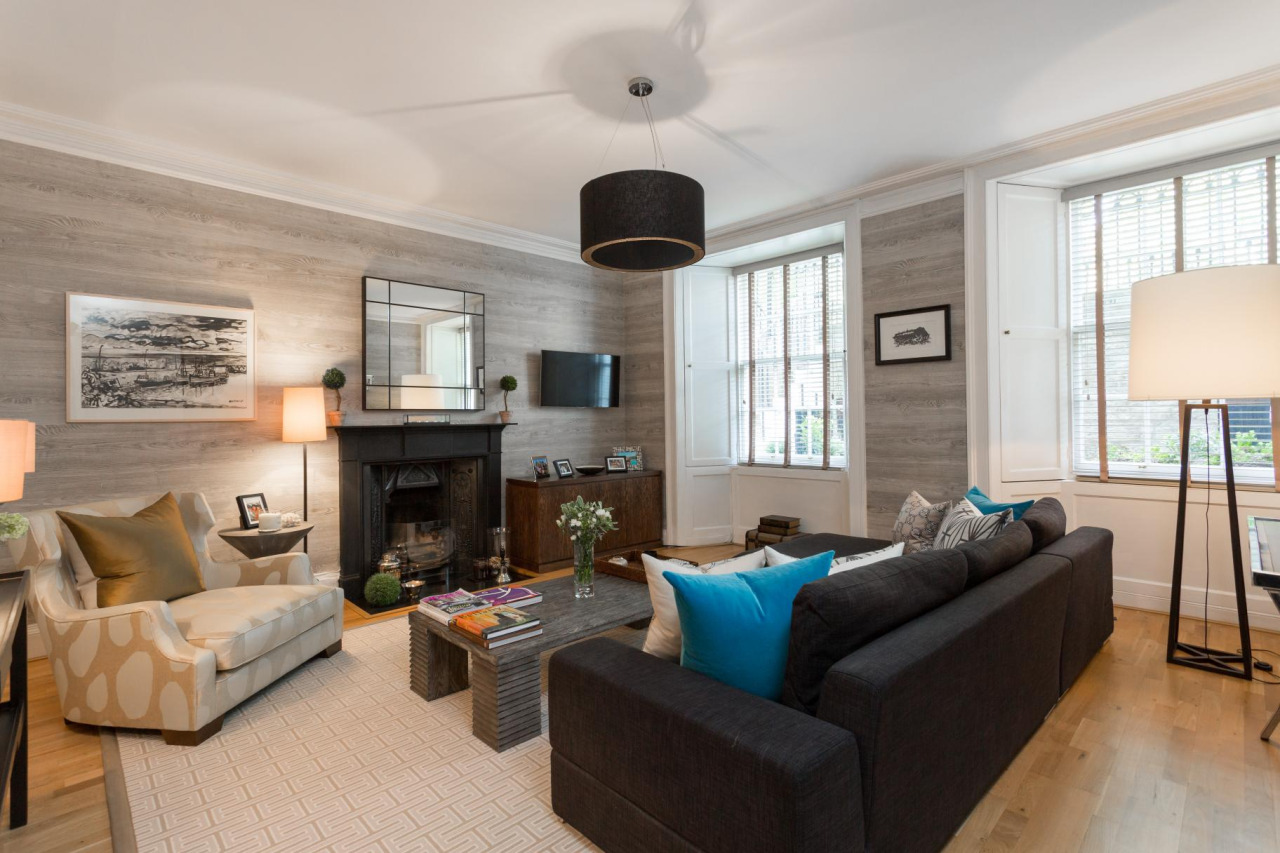 What happens when a property expert and an interior designer go shopping for a new home? Well, chances are, they find a great property in a prime location, and tackle a bit of a project. Do you know of any interior designers who wouldn’t want to transform their own home? No, me neither. 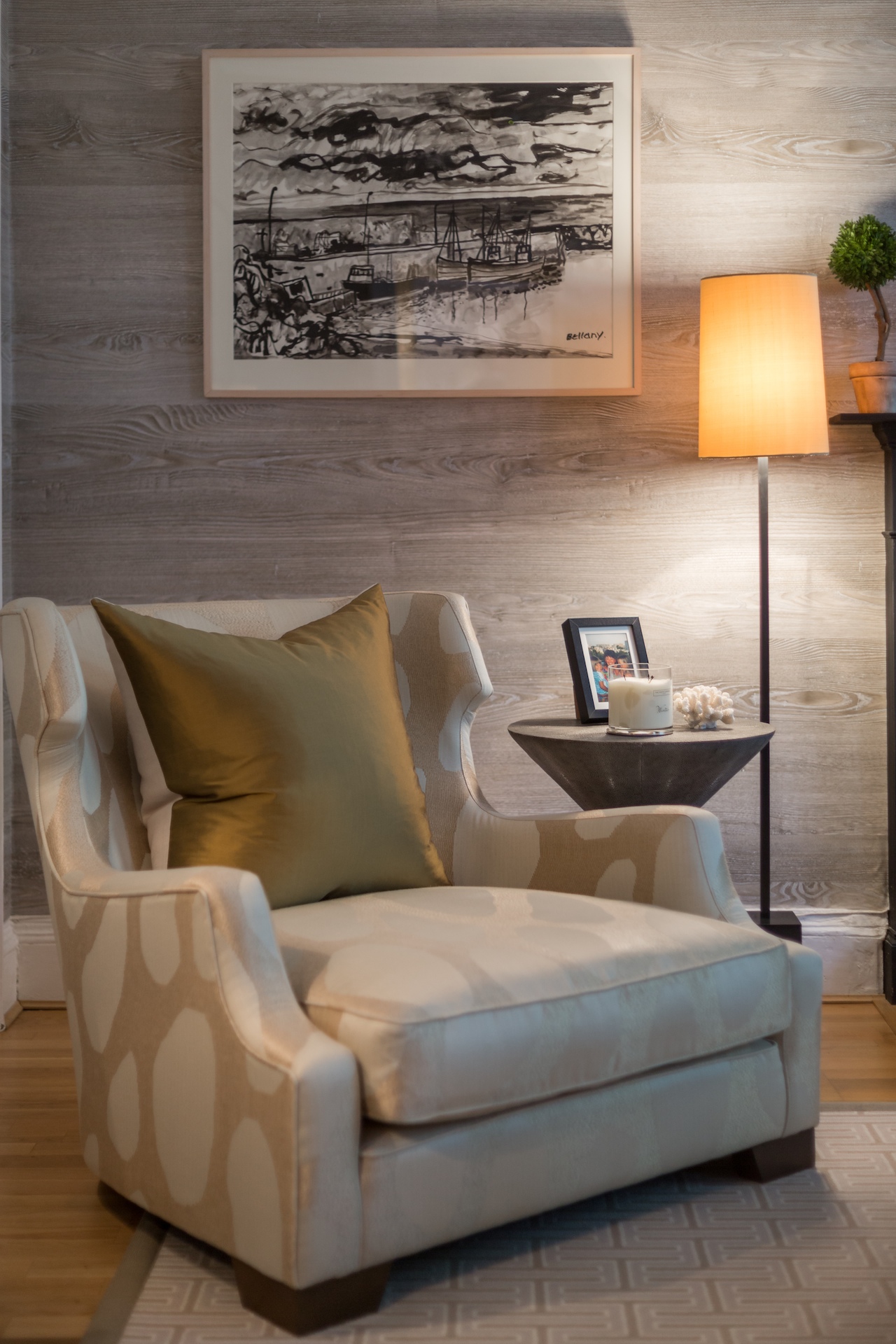 Steven Currie is a director of Murray & Currie, which he launched in June 2008 with business partner Richard Murray, and the company specializes in residential property sales, management and investments, so needless to say Steven knows a great property when he sees one. Abbey works with the Edinburgh-based interior design practice Ian Smith Design – Ian’s own home was featured on the Files back in March – so she was keen to put her own stamp on a place.

The couple picked up the keys to this four bedroom main door garden flat in Edinburgh’s Stockbridge area just a week before they were married in September 2011, and tackled a redesign project that was completed in time for Christmas last year. I caught up with Abbey and Steven to discuss the process, and to ask what it was that set this property apart from the many others they had considered. 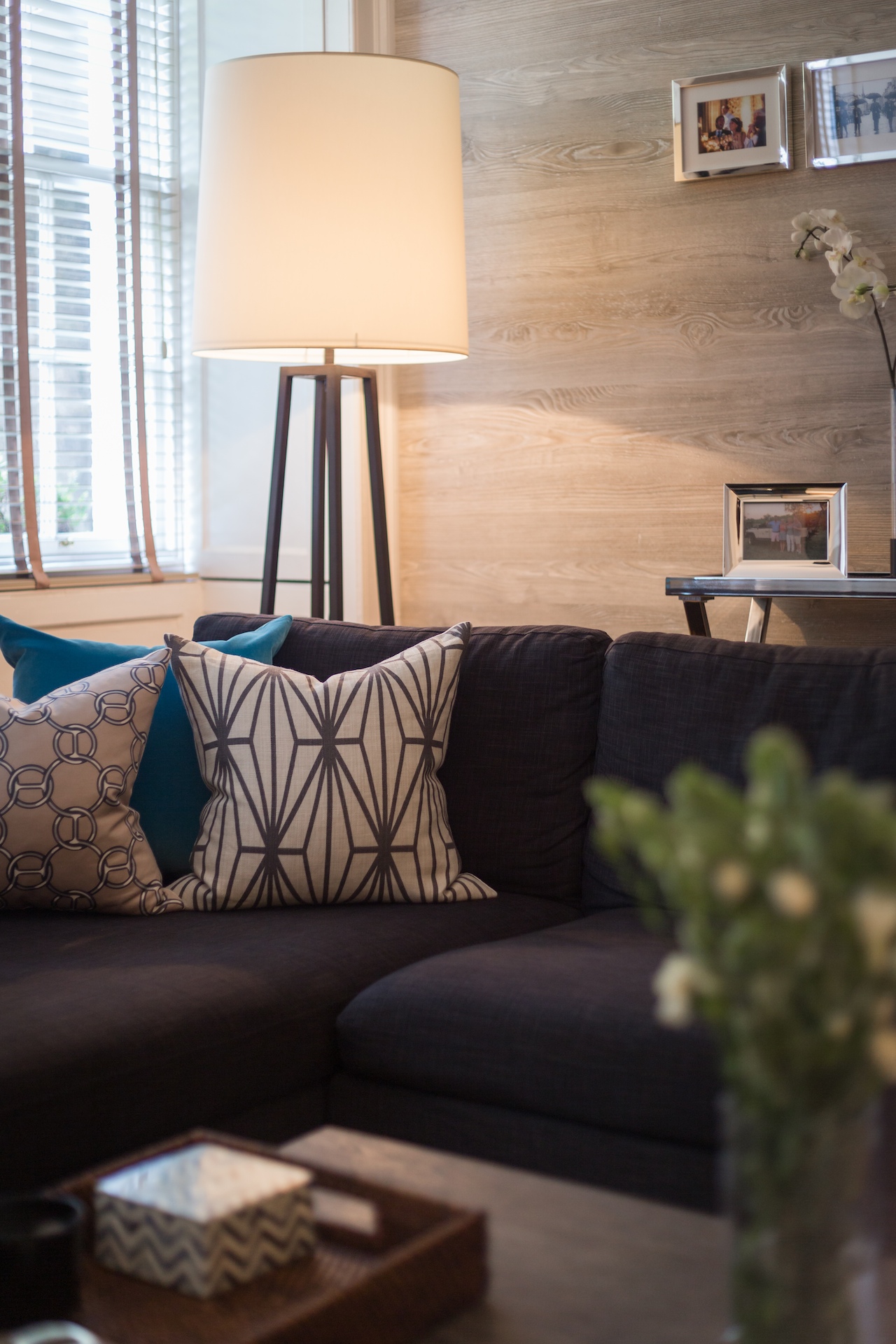 Why this flat, and why this area?

Steven: I remember when I was younger looking at streets in Stockbridge and Edinburgh’s New Town and West End thinking, ‘One day…’ I think you have to set locations and houses to aspire to which drives you on in business. We had looked at a number of properties before we came here, and had almost reached that stage of buying something for the sake of it as we were fed up looking, but this was the place we walked into and went, wow.

Abbey: We enjoy having friends around and wanted to have space to entertain, and this flat gave us that space. That was one of the things that first struck us: the size of the flat, as it’s bigger than you might expect from outside and has really high ceilings, which again you might not expect from a garden flat. And there was just so much potential. The previous owners had a family and both the dining room and the smaller of the bedrooms were decorated as kids’ rooms, so it was exciting thinking what those spaces could become. 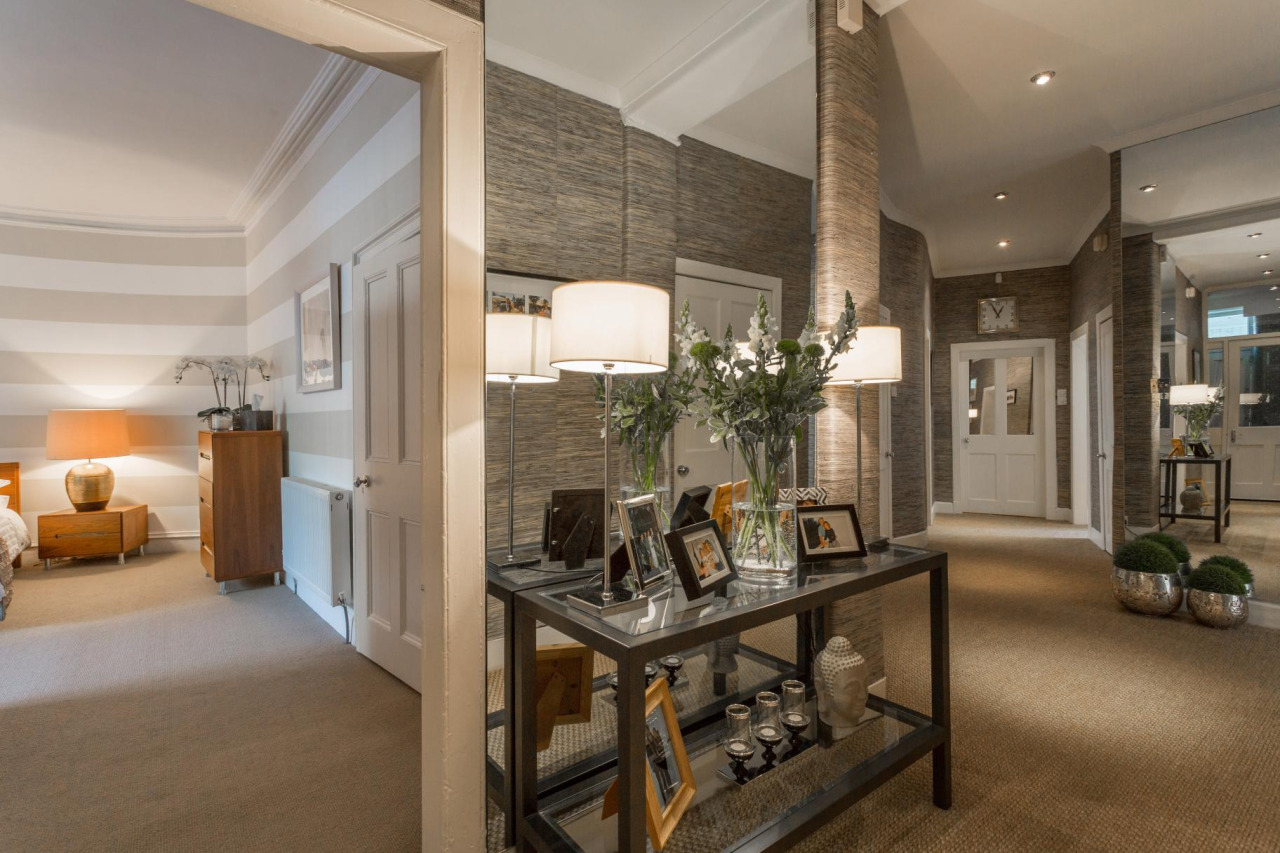 How did you go about the redesign process?

Steven: The key thing when we first moved in was to get the main bedroom, the kitchen and the living room looking nice. I knew if we could be comfortable in the three rooms that we use the most, then we could just close the doors to the others and take our time.

Abbey: We didn’t want to look back and regret decisions we’d made. Saying that, we did redecorate two of the rooms twice – both rooms had feature walls first time round and they weren’t quite right. When we moved in, the décor was very plain with painted walls, whereas I wanted to bring in textures with the wallpapers. I’m quite a gut person, and with every wallpaper I chose here I saw the design and loved it straight away. Although some of the patterns are large scale, I’ve used a lot of neutrals on the walls, and then added colour with the lighting and accessories. 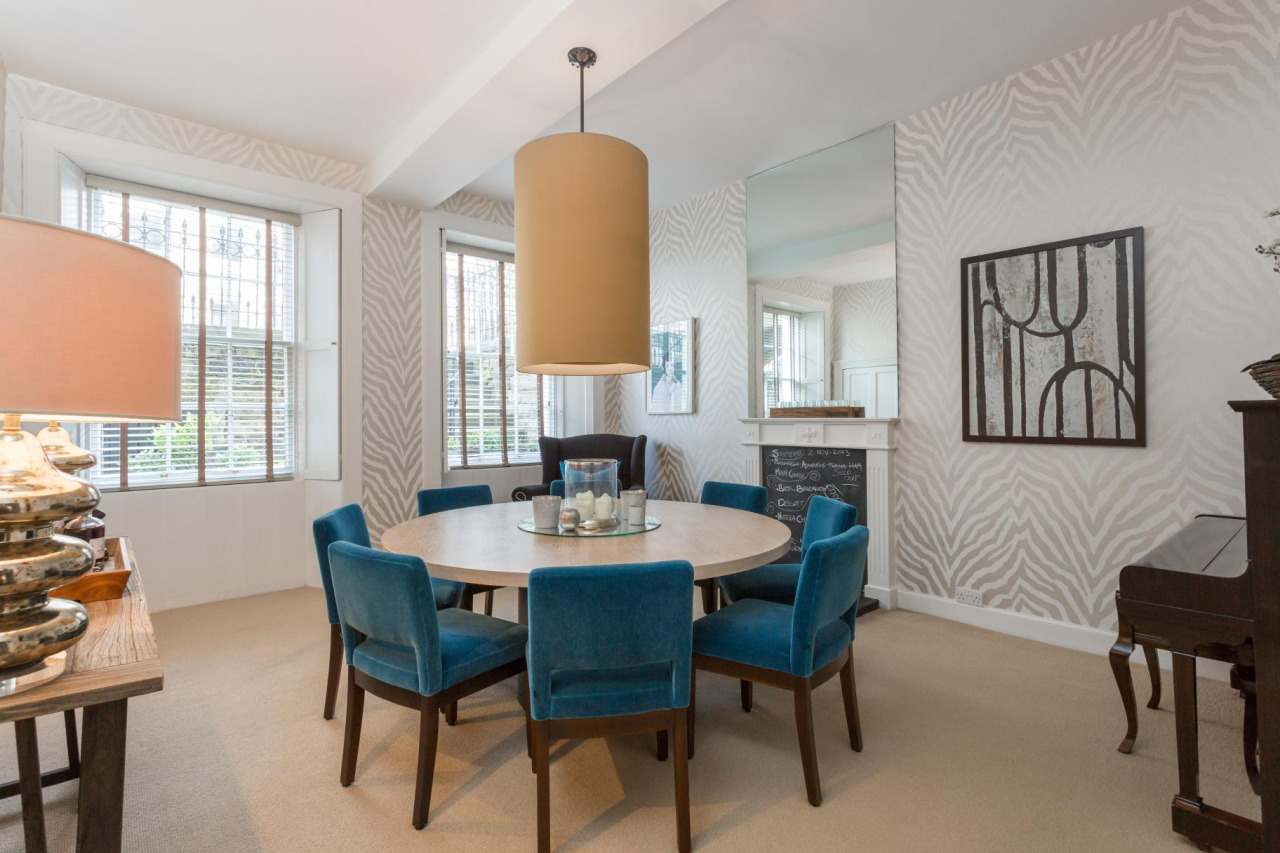 The wallcoverings have real impact – who are they by?

Abbey: I used Nobilis grey oak panel wallpaper in the living room, which was hung horizontally. It’s a big space and this has added a lot of warmth. The master bedroom has Vivienne Westwood’s Squiggle print for Cole & Son, while the front guest room has Carl Gustaf striped wallpaper by Sandberg, again used horizontally. The kitchen features Savine by Designers Guild, and the dining room has the Etosha print by Thibaut, which is quite dramatic.

The hallway was really transformed. The hall originally had a wooden floor and painted walls, so I chose a sisal carpet and a Colony Raffia wallcovering by Thibaut. It’s brought the whole flat together as before this space was very echo-y, whereas now the textured walls and floor have made it feel really cozy. 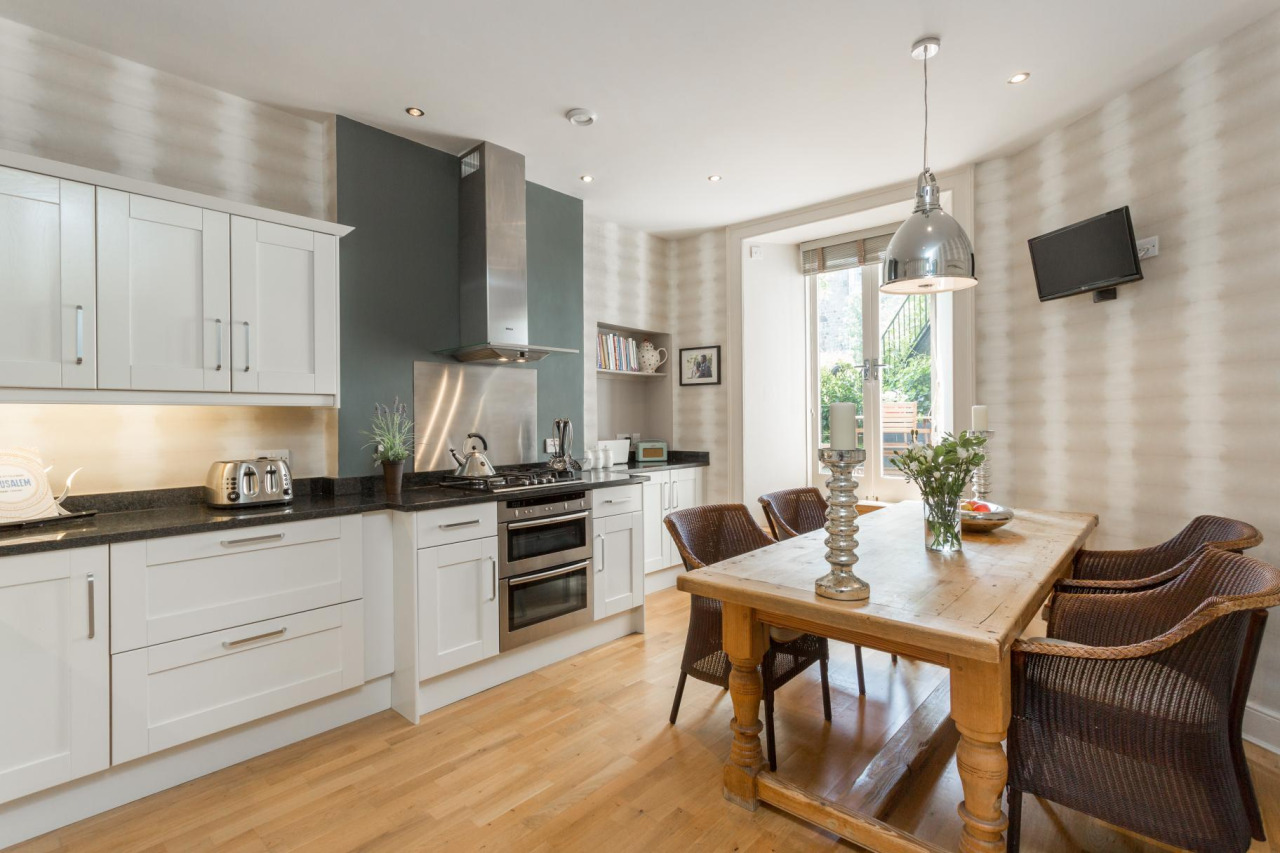 Did the flat need any fundamental upgrading, like new electrics or plumbing?

Steven: No, the previous owners had done quite a lot of work as this has been a student flat before they bought it, so they invested in redoing the bathrooms and the kitchen, and they installed the French doors leading out to the courtyard garden from the kitchen. The main bathroom is fitted out with Fired Earth so we just freshened that space up with paint.

How did you redesign the en-suites?

Abbey: We opted for large profile tiles with natural finishes and texture. I like natural slate, and we had already had the bespoke headboard made for our bedroom, which was upholstered by Ian Smith Design in a dark grey fabric, so I thought a nice charcoal-hued slate tile would work well in our en-suite, with Travertine in the guest en-suite. 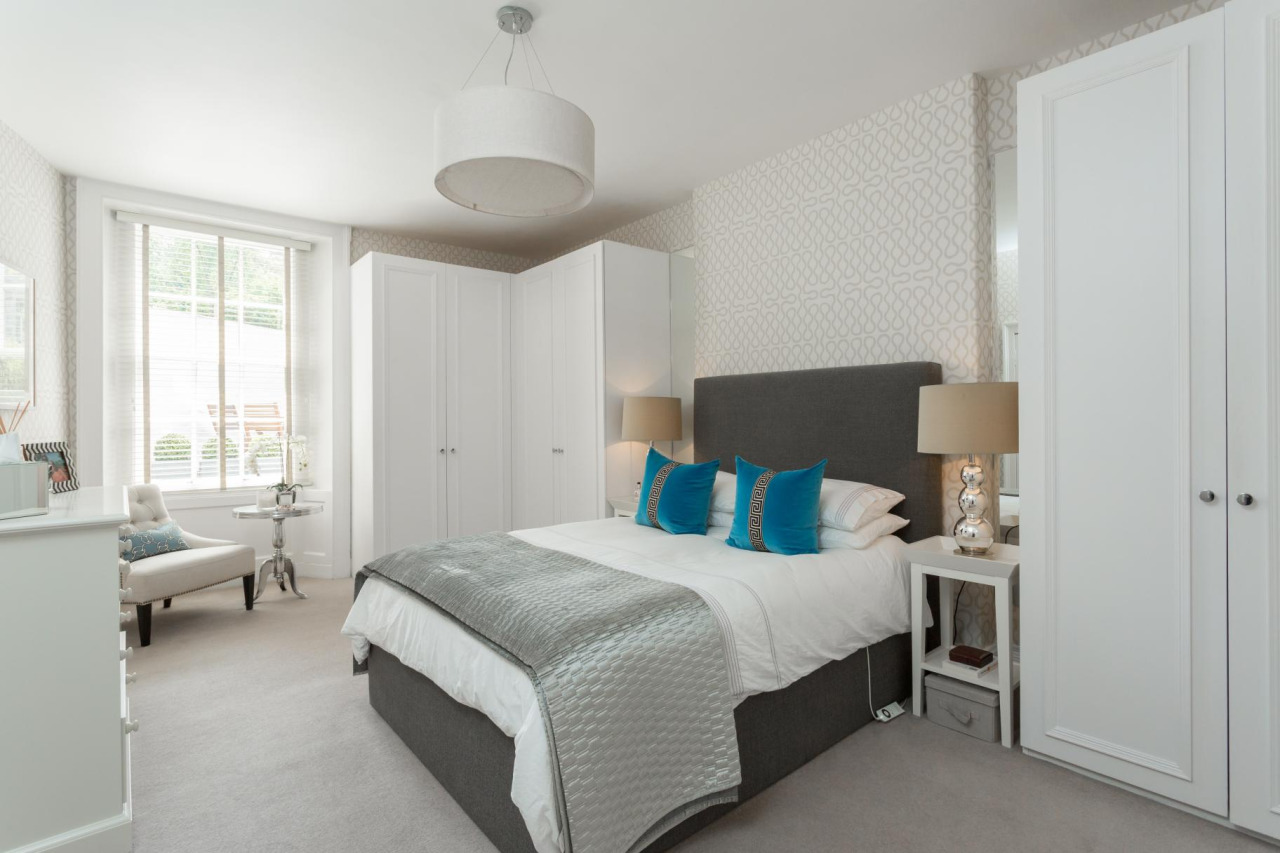 What about the dining-kitchen? It’s always a crucial space to get right in any home.

Abbey: The existing units were relatively new and they were good quality, but they were timber and with wood on the floor as well the room felt dark, so we wanted to make the space lighter and brighter.

Steven: We took the doors off and had them spray-painted by Tempus 4, which was a big job but it’s like having a brand new kitchen. And we removed the tiled splashback and added the stainless steel panels and the wallpaper. Lightening the cabinets just transformed the space. 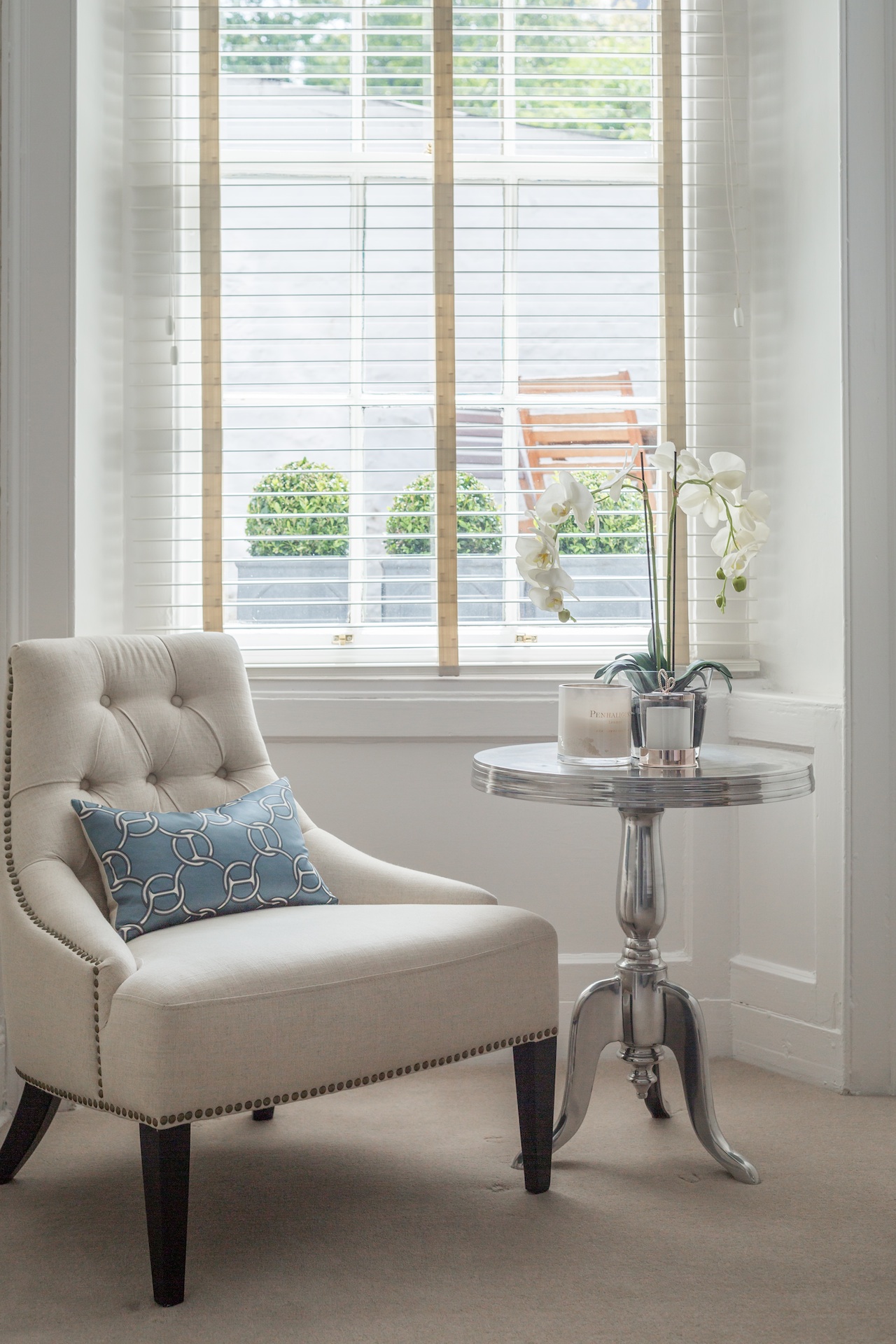 Is there any part of the flat that’s really exceeded your expectations?

Abbey: The dining room, which is the last space we completed and we haven’t had the chance to use it much yet, but everyone walks in and says, wow! The circular table was made by Tempus 4 – it combines a timber top with a base made from a sheet of mild steel which was rolled and painted bronze. We spent a few months finding chairs to go with it. I like statement pieces. When the walls are neutral, having a big lampshade in a bright colour makes it quite special. 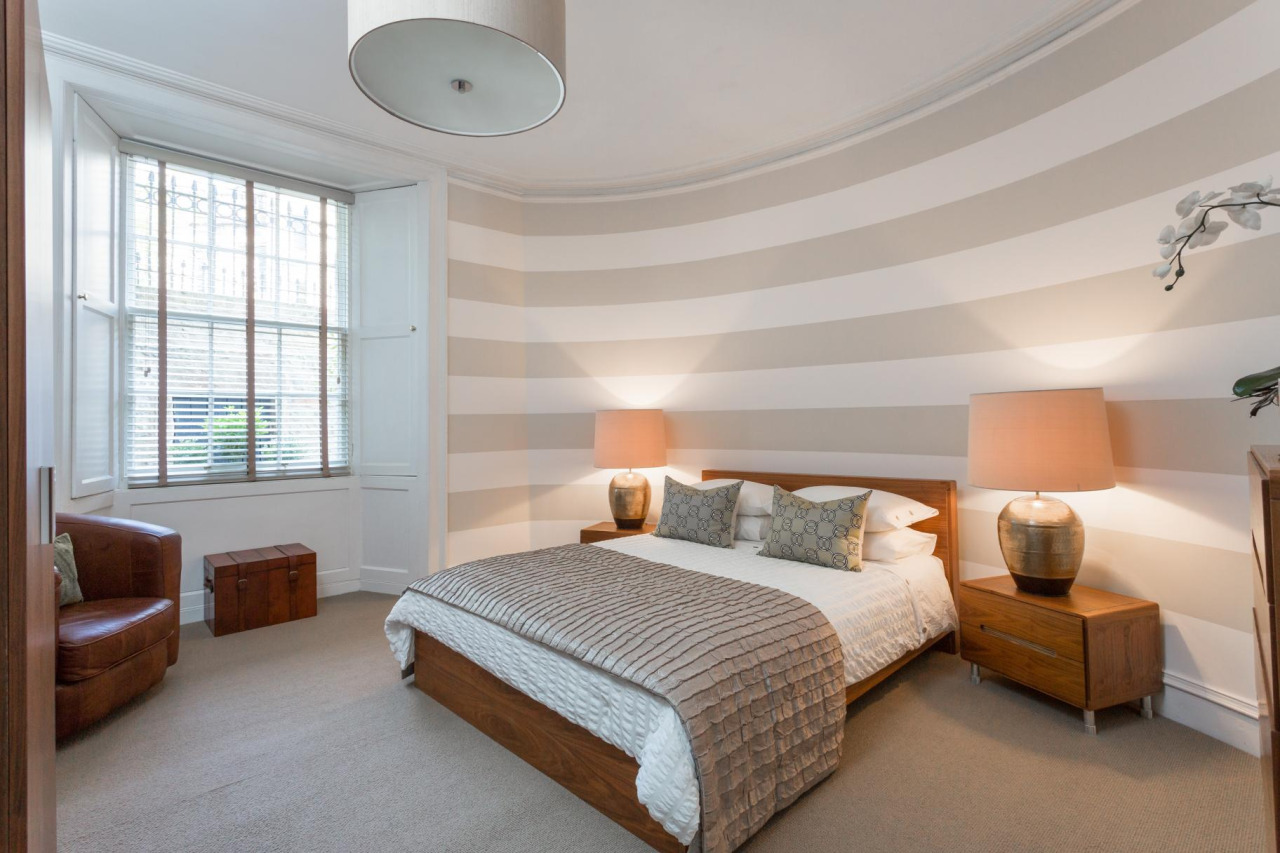 What have you learned from this project that will influence whatever you tackle next?

Steven: When we moved here we happily shut off part of the flat and assessed which rooms were important and focused on those, and we’ll do the same with the next house.

Abbey: This project has proven the value of taking time. It’s important to take time and match things and make sure the space flows properly. 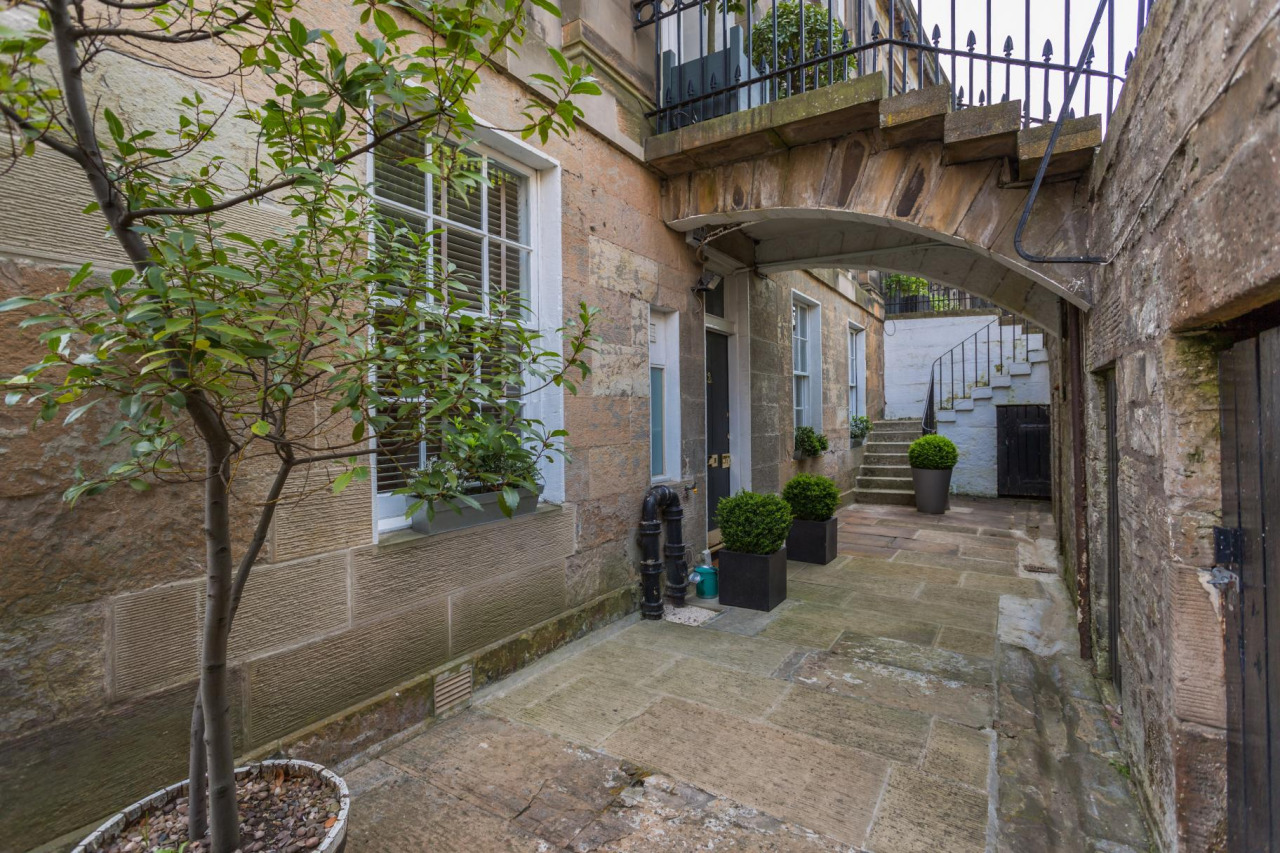 2A St Bernard’s Crescent was marketed by Murray & Currie.

A PHOTOGRAPHER’S HOME IN GHENT