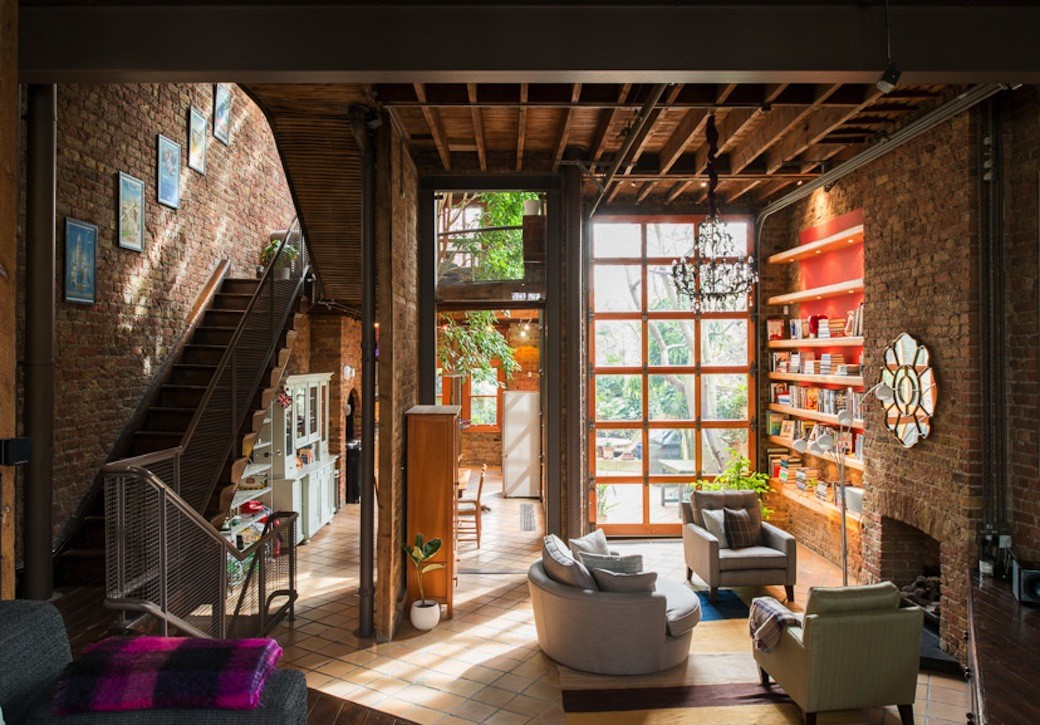 When you’re a property writer looking for a hook to a story, it doesn’t get much better than realizing that the house you’re writing about was once owned by Stephen Fry. I mean, The Stephen Fry. As hooks go, that’s a pretty good one. 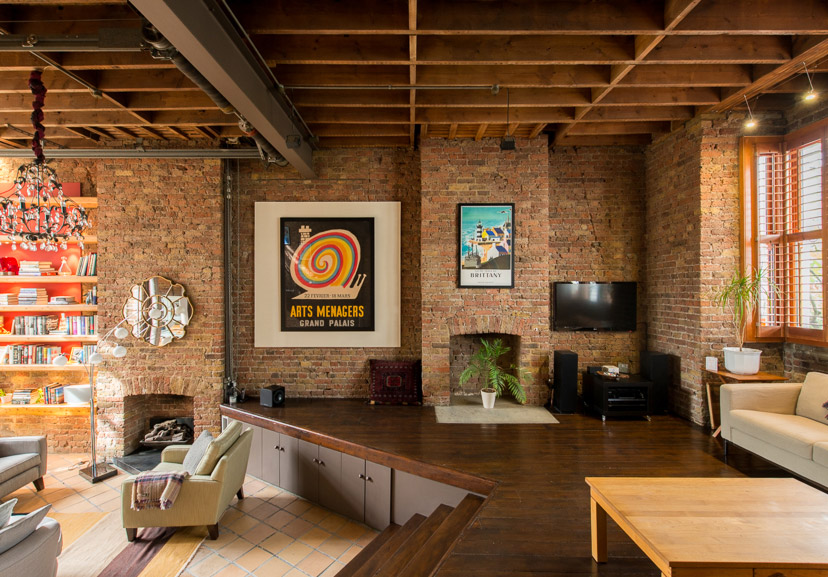 But, to be honest, I was sold on this incredible looking house on Sherriff Road in London’s West Hampstead as soon as I clapped eyes on the first photo on the property’s listing with The Modern House – without even getting to the information about its previous owner. And the rest of the photos didn’t disappoint either. What a striking and completely unique home. It looks like a warehouse conversion – indeed, if you were only shown interior photos of this building, you’d put money on this being an industrial conversion of some type, be it a factory or warehouse, thanks to the combination of exposed brick walls and timber rafters, not to mention the sheer volume of the living space. 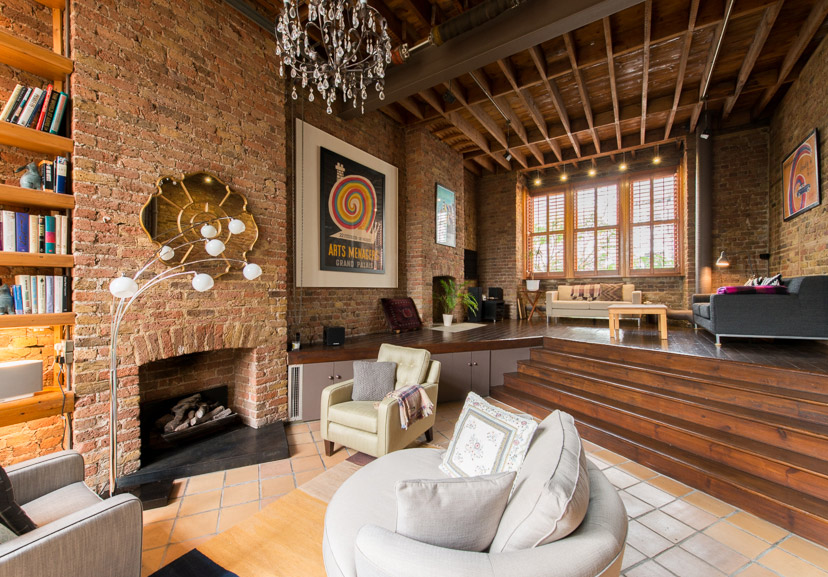 Talking of which, there’s a tree growing up the middle of the house. Yes, a tree. Inside. And this building is tall enough to accommodate it. 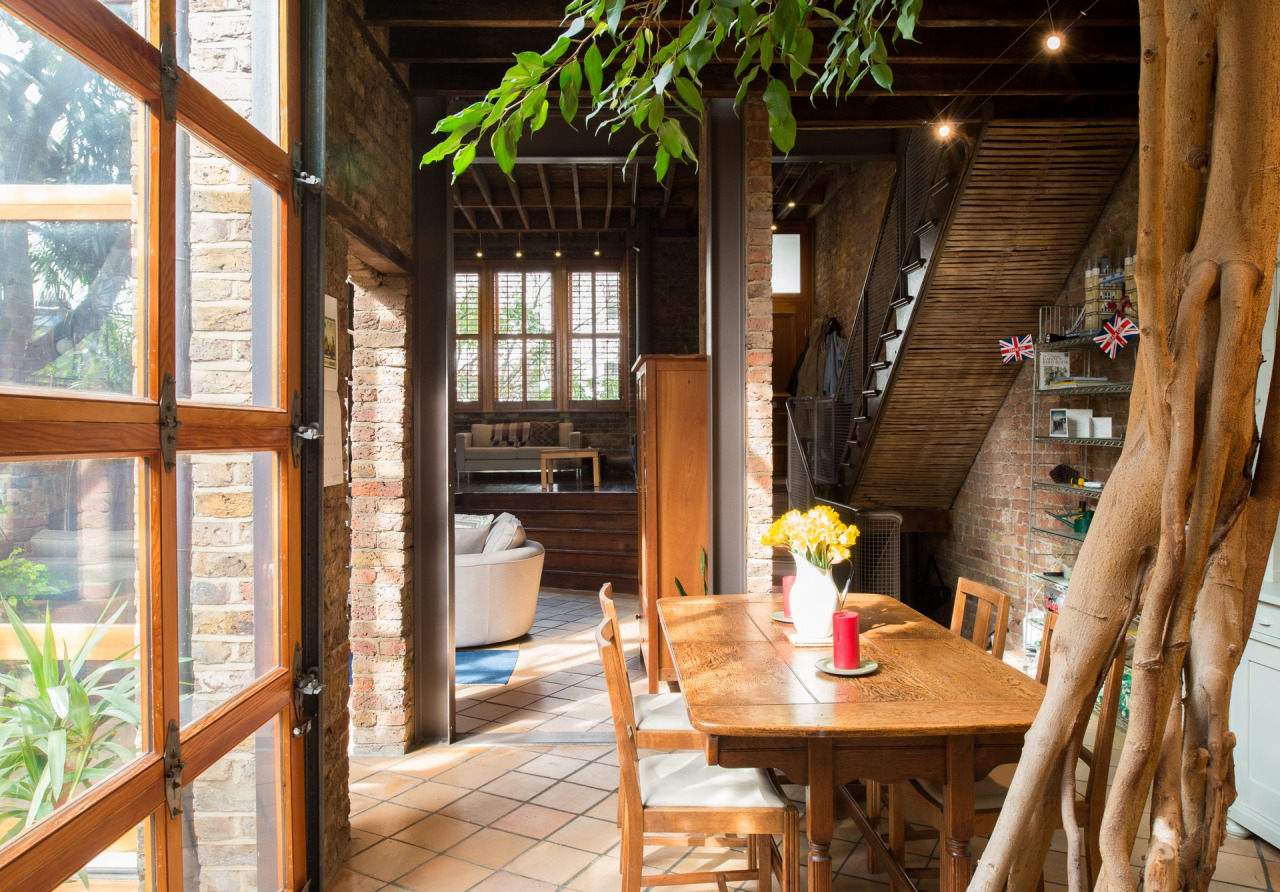 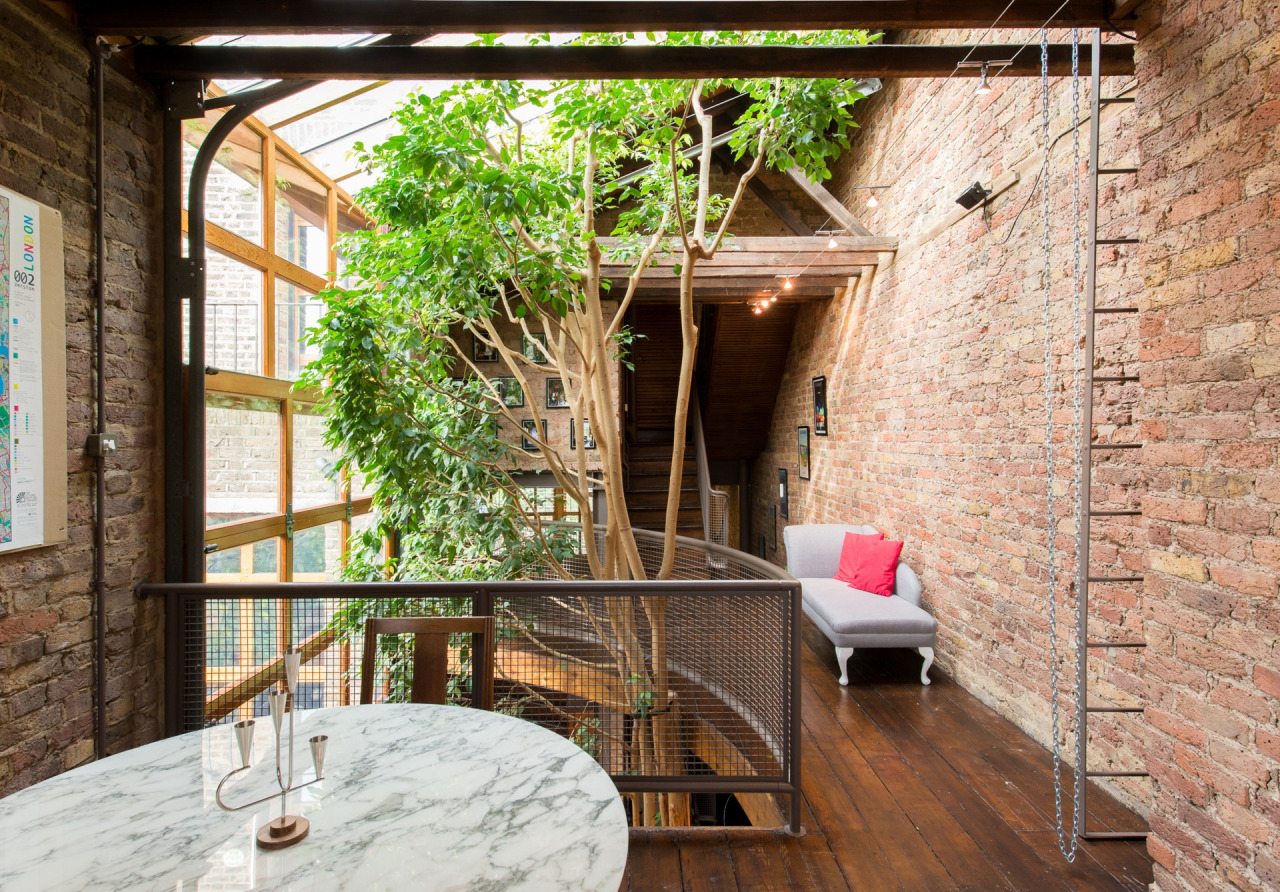 But then, hang on, why does the front elevation on the property’s listing with The Modern House show a very handsome looking late Victorian terraced house? Surely this can’t be the same property? But it is, as behind that perfectly elegant and respectable façade lies this voluminous living space. Back in 2002 in an article in the Evening Standard – as quoted in this recent feature on West Hampstead Life – Stephen Fry said: “I fell in love with this extraordinary house. It’s an ordinary terraced house, but an architect scooped out the inside and created all these different levels.” 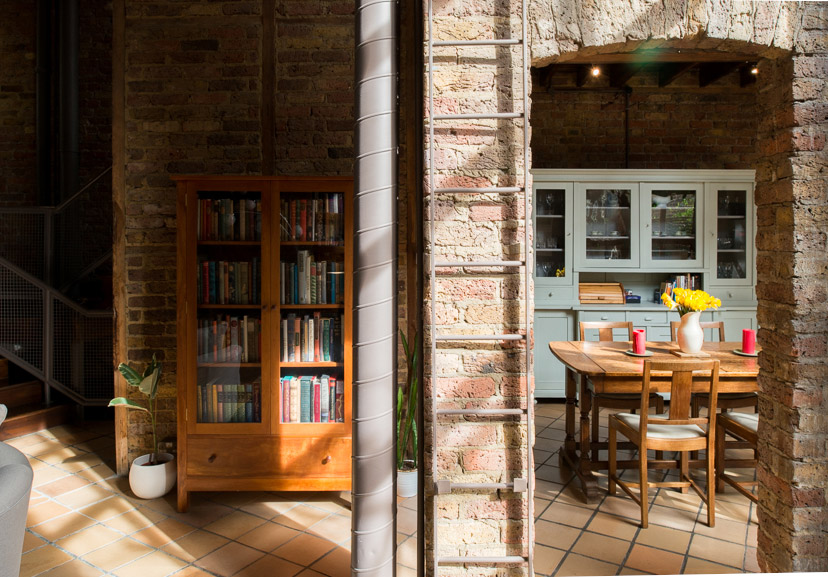 That architect was Brian Muller, who completely redesigned this property in the 1980s, stripping the building back to the structural fabric of brick, joists and lath, and planting the aforementioned tree. The interior can be opened up to the south-facing garden thanks to the giant glazed up-and-over doors – if you look at that final photo above, you’ll note that the door literally glides up into the roof space. 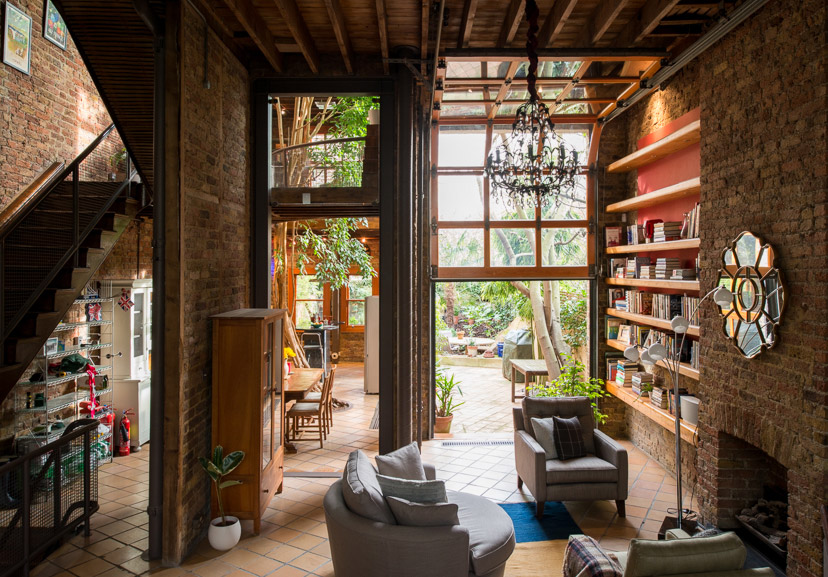 The ground level really is extraordinary. The main split-level reception room is over 35ft long and spills into the open plan kitchen and dining area. There are five bedrooms over the two upper floors and three en-suite bathrooms, and one bedroom features a mezzanine level built into the eaves. The study area on the first floor overlooks the dining space below, enhancing the overall sense of inter-connection. 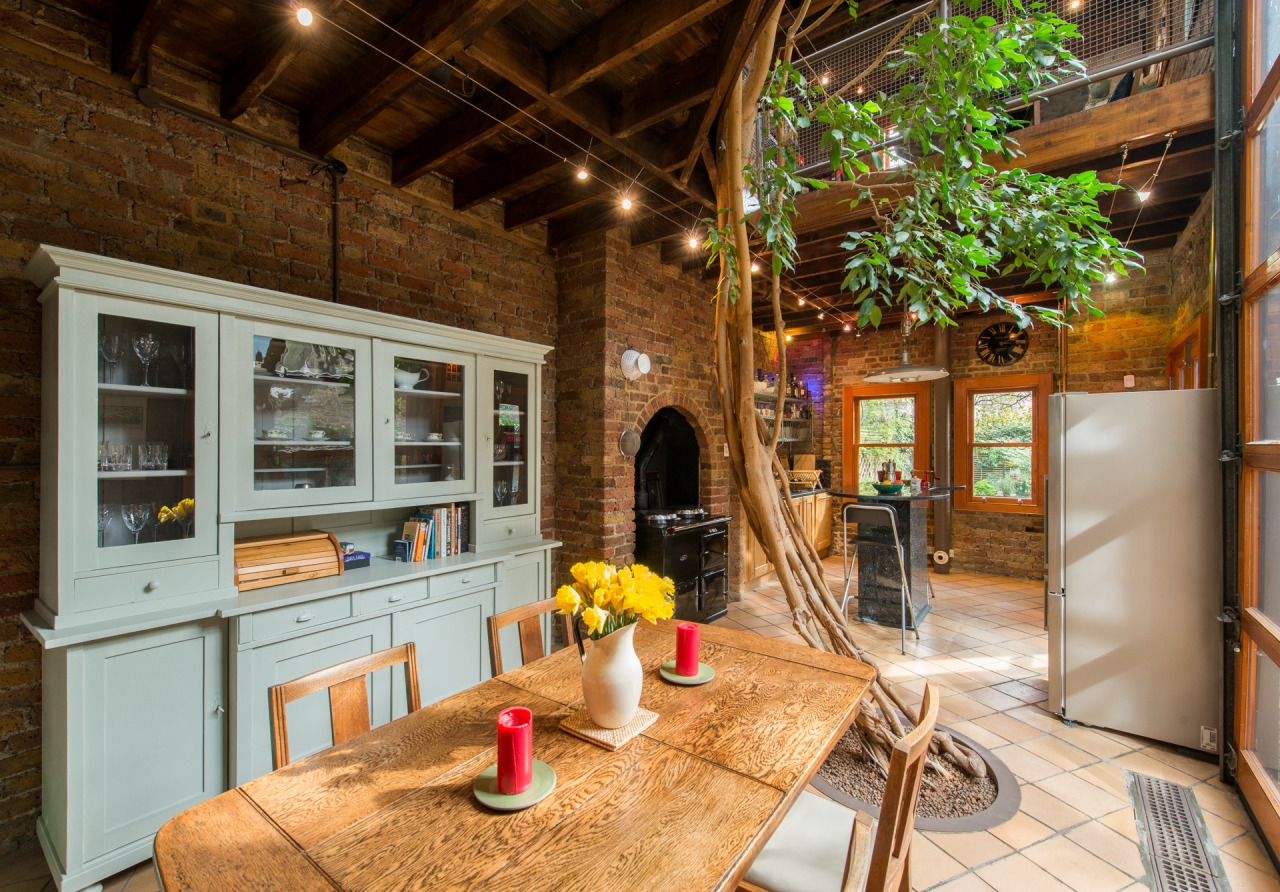 The house was the subject of an extensive feature in the Architectural Review shortly after its completion, and a section of the article is quoted in the property’s listing: “On entering, most first-time visitors gasp. The effect (of Muller’s design) is spacious, light, cheerful and very liveable. It is also enchanting at night…” Interestingly, after training in architecture, Muller went on to become an experimental filmmaker. It’s little wonder that this house appealed to Stephen Fry’s creative mind. Fry sold the house in 2010, and now that it’s on the market again, I think it’s fair to say that there can’t be many properties for sale in London that offer such an adventurous and exciting living space. 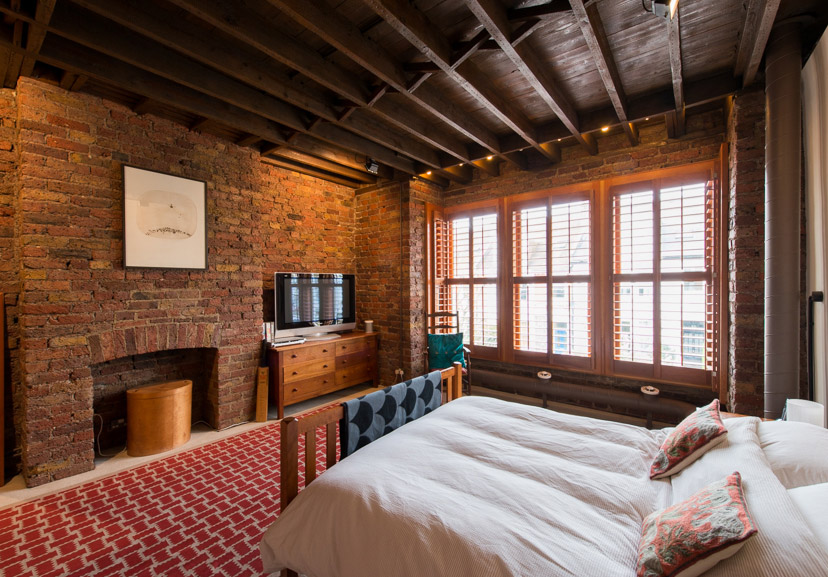 This house on Sherriff Road was marketed by The Modern House.