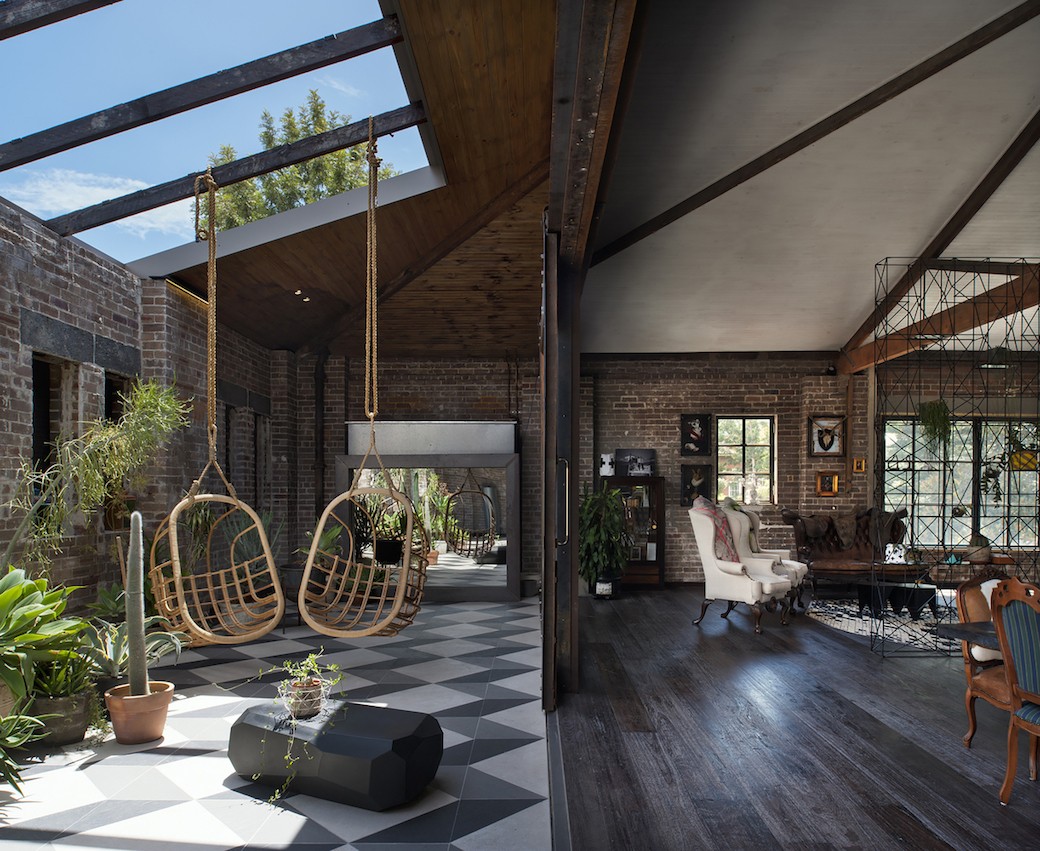 Usually, when I’m looking at houses online, I’m drawn to an interior by one photo. There’s usually that one image that will catch my eye, just as the photo above did. I have a major soft spot for warehouse conversions and this one in Sydney is also a great example of indoor-outdoor flow of space – just look at that external terrace – and feels authentic with its exposed brick and chunky timber trusses. And even that one photo suggests that this home is owned by someone with a confident aesthetic and an eye for eclectic styling.

But then, this warehouse has a surprise waiting – namely, a giant sculptural white pod that’s been inserted into the main volume of the first floor living space. Architects Allen Jack+Cottier refer to this design as a ‘Mancave‘ and it was created as a private suite for the owner. 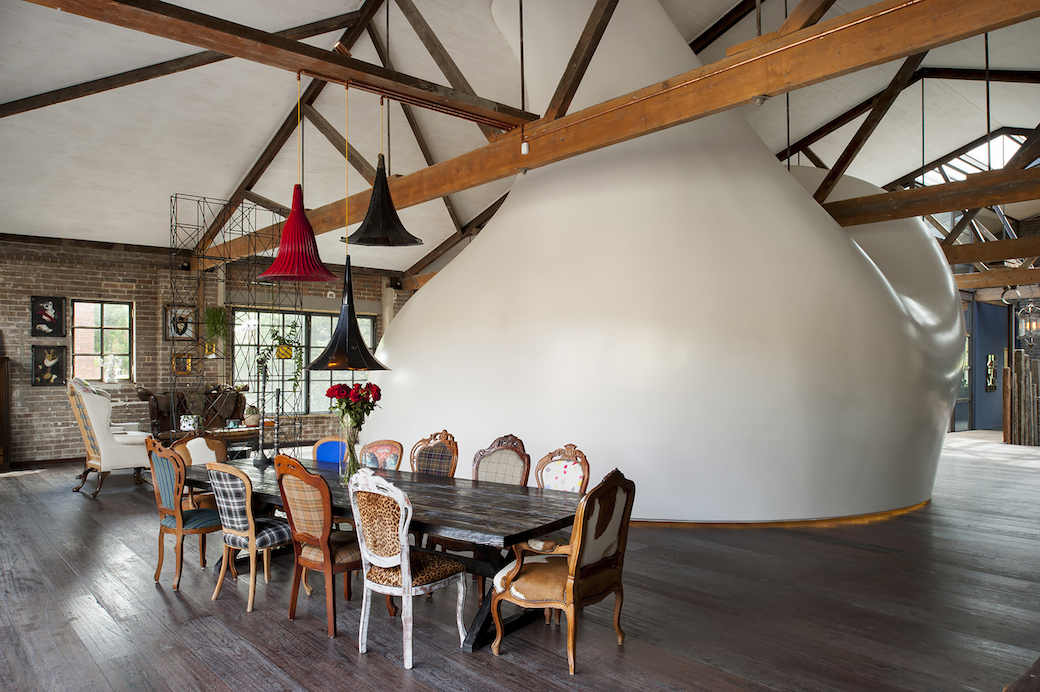 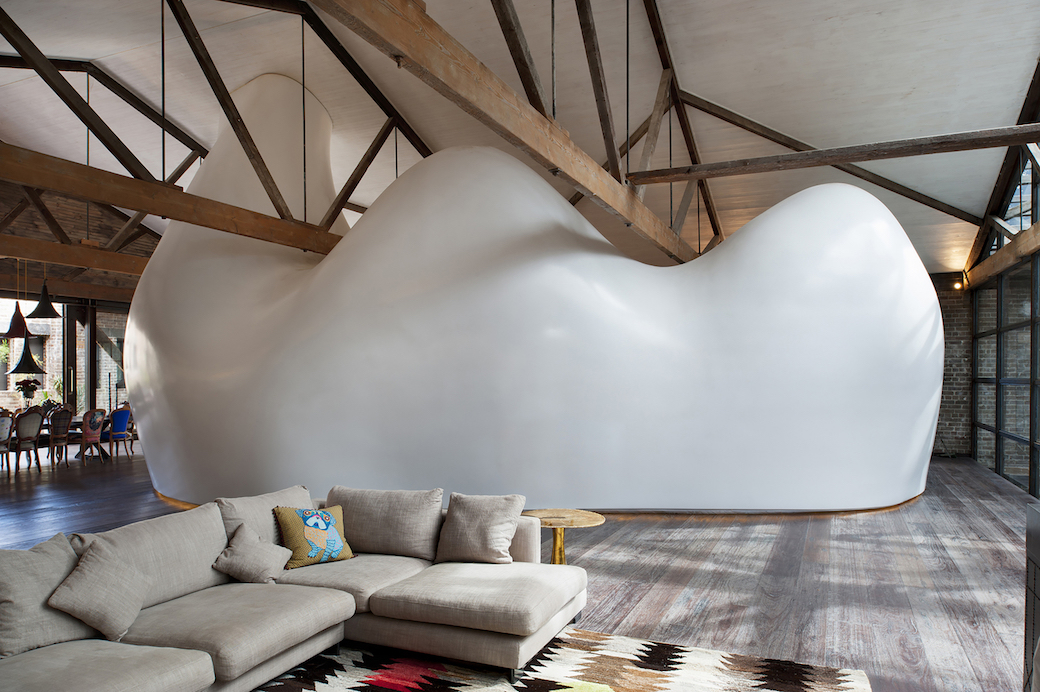 Unexpected, right? Inner City Warehouse started life in the early 1900s as a food manufacturing factory and was later used as a furniture factory. The owner had been searching for an urban warehouse-style building for some time, and wanted to create a social space where rather than the interior being focussed on views out, it was about views within and how the spaces were connected.

Sections of the building underwent significant alterations to bring in light and to create those connections. Today’s home includes four bedrooms, the giant multitasking living space, a very large kitchen – by Art of Kitchens – and a music room, along with the terrace and a swimming pool. 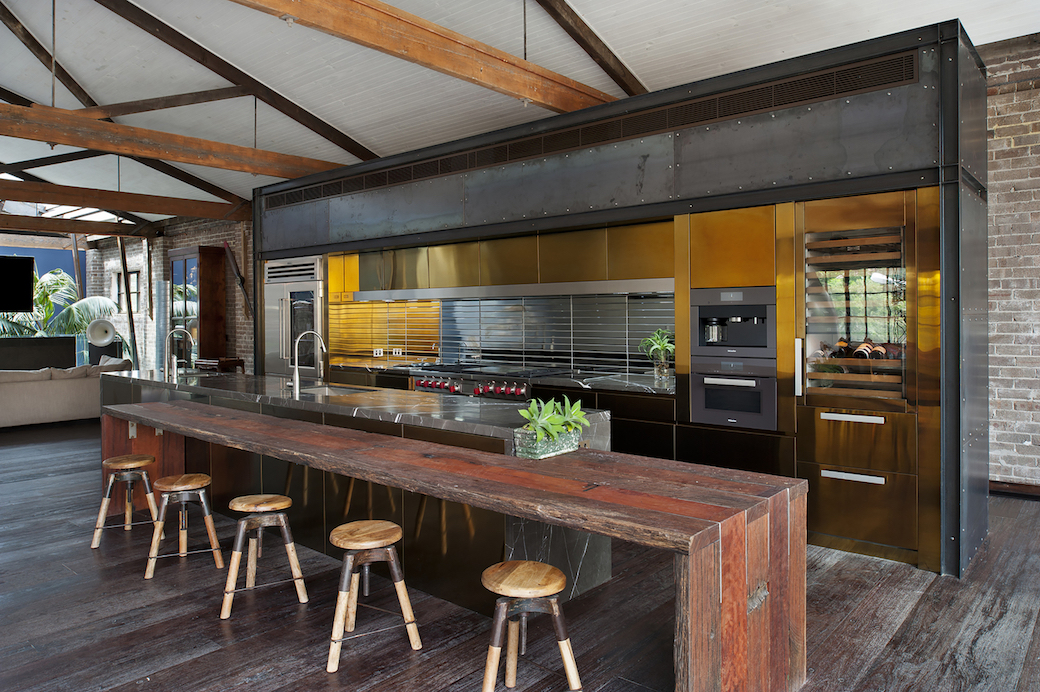 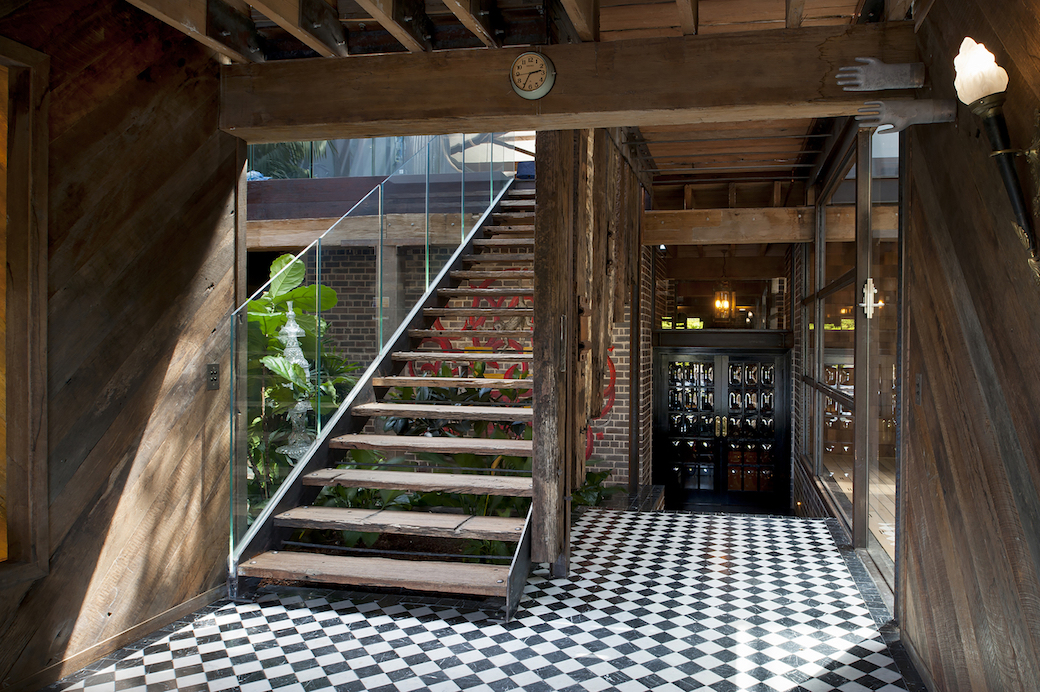 There’s lots of fantastic patina going on here – I love the diagonal timber boards on the walls above – and there are moments of contrast, as with the rough and rustic stair treads combined with the slender and minimal glass balustrade. And this warehouse does have some seriously luxe and dare I say glamorous moments. 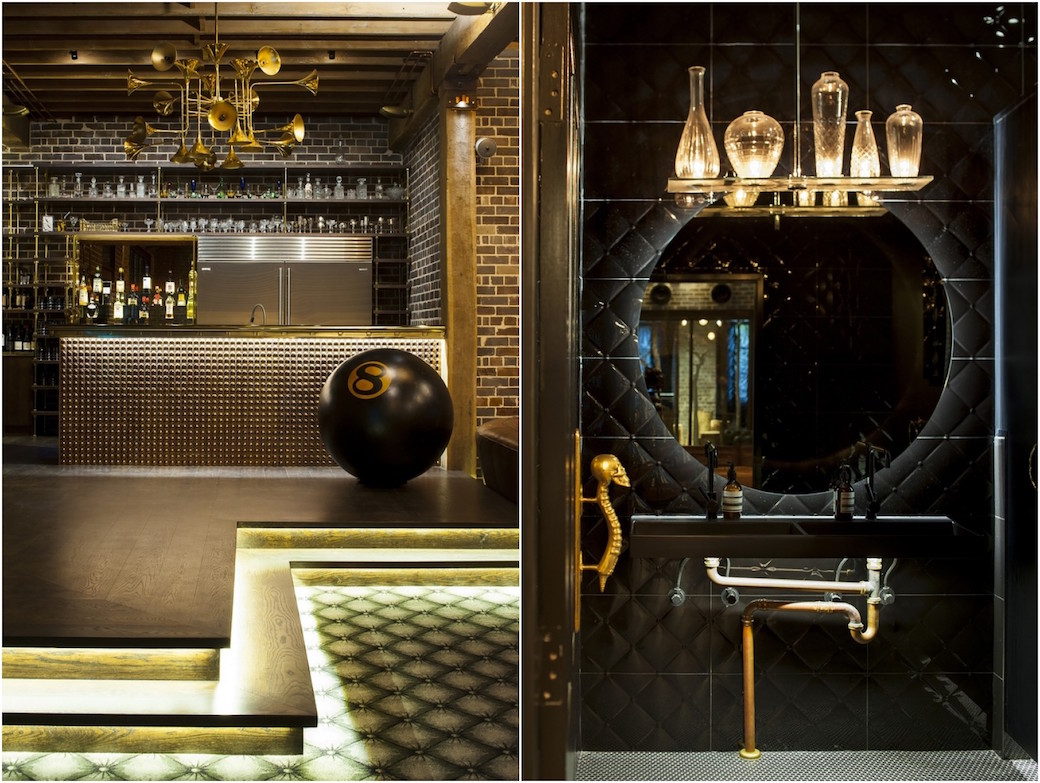 The pod though – the pod has to be the highlight of this interior, and I admit this is probably a love it/hate it moment. I’m drawn to how striking and unusual this juxtaposition is when you view the pod within the wider space, and in the way in which this sculptural piece undulates fluidly around the existing roof beams. Also note the skylight, which, the architects say, “recreates the effect of a shaft of light filtering down through a canyon.” 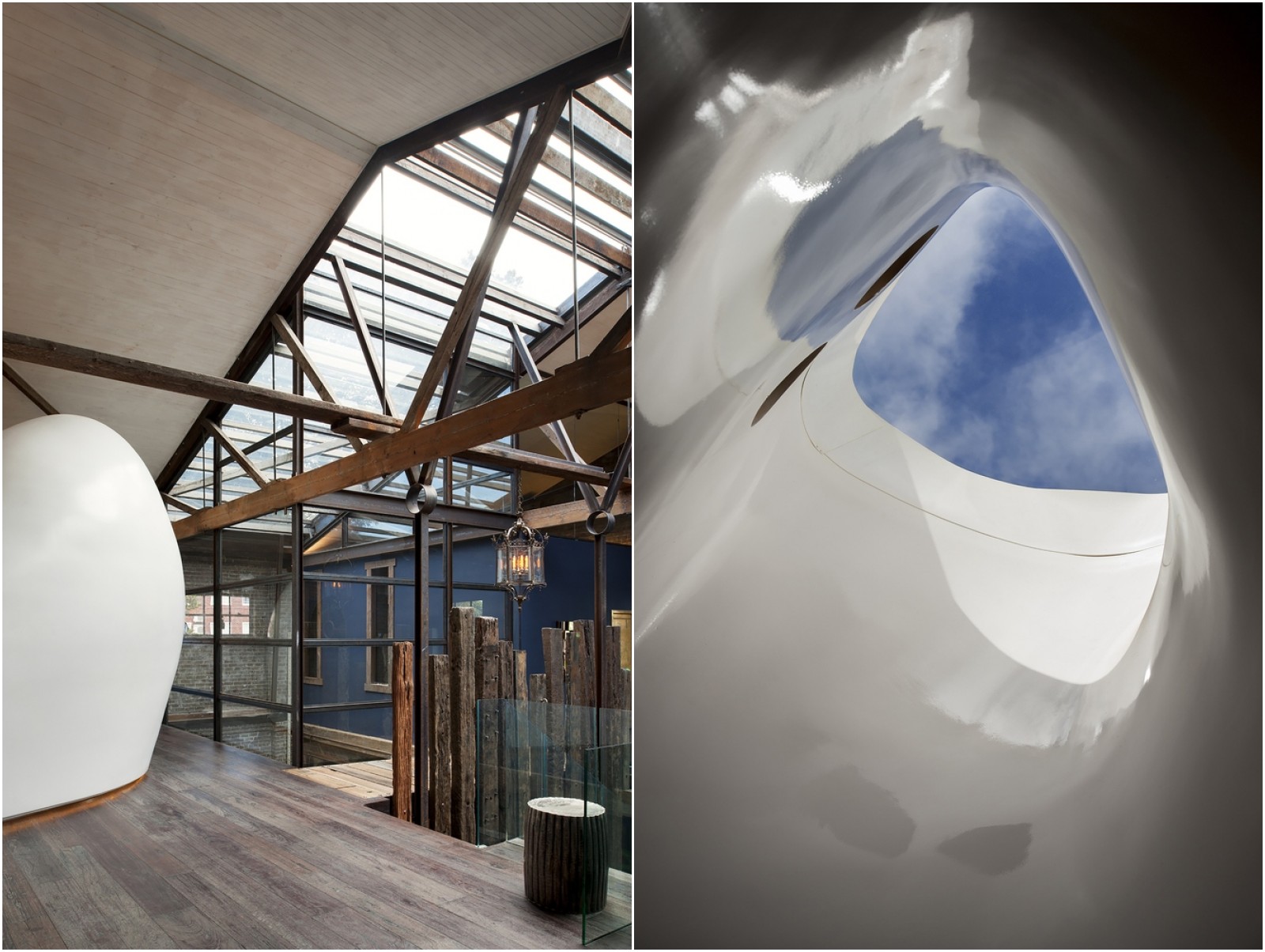 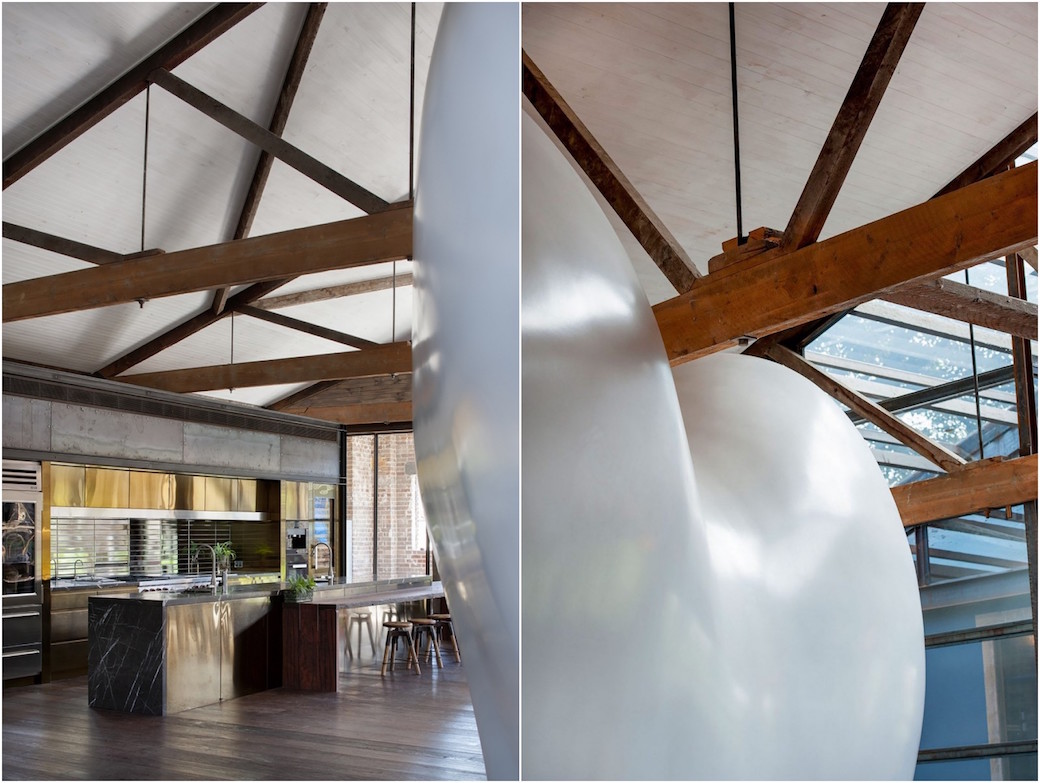 The ‘Mancave’ is made from carbon-fibre and features a semi-gloss finish of resin-faced foam. The pod is split into two zones: a sleeping area, where a large bed is integrated into the shell, and an en-suite with a shower area and built-in vanity, and a freestanding basin and bath. The flooring in the sleeping area is clad in large profile leather tiles, and recessed LED lighting snakes around the base of the room. The en-suite has certified teak boarding, and is finished like a yacht deck. 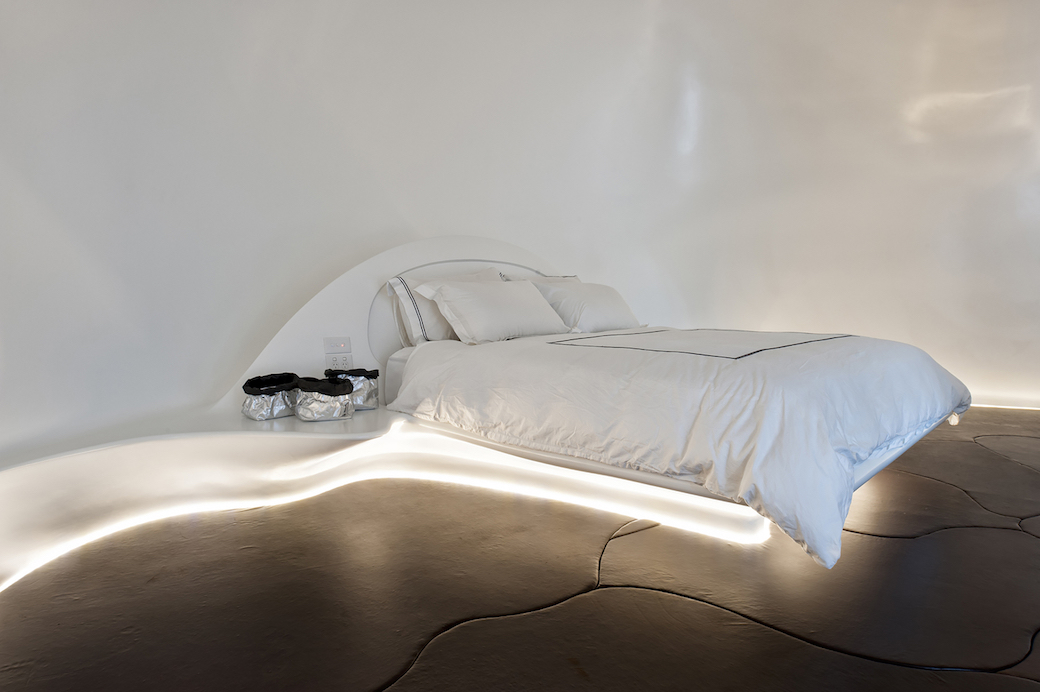 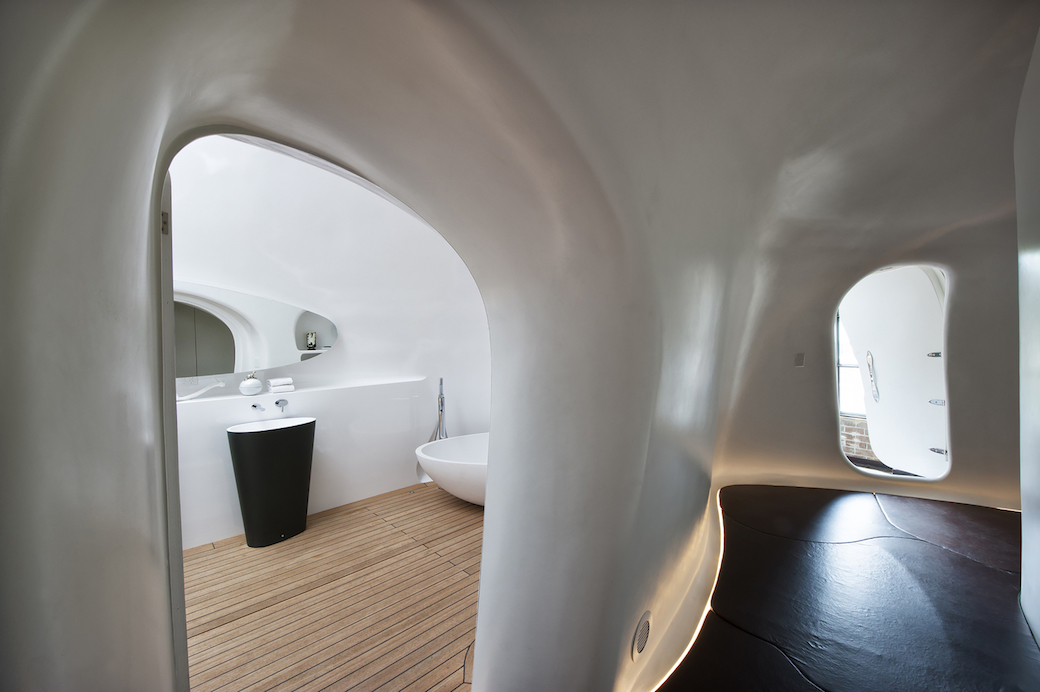 I have to acknowledge, while I could never imagine sleeping inside this, as a piece of sculpture, and as a concept, I’m drawn to it. Many years ago, I wrote about a project in Edinburgh: a ‘Bed Box‘ designed by Oliver Chapman Architects, where a timber bed was created within a timber ‘box’ that also included integrated storage and a built-in seat with concealed shelving. This piece sat within a living room and functioned as a guest bedroom. This pod, though different in both form and materials, reminds me of that similarly unique response to the idea of sleeping within a living space.

Allen Jack+Cottier say of the piece: “As the warehouse’s central feature, the pod organises and informs the spaces around it, while providing a private cocoon for rest and privacy.” 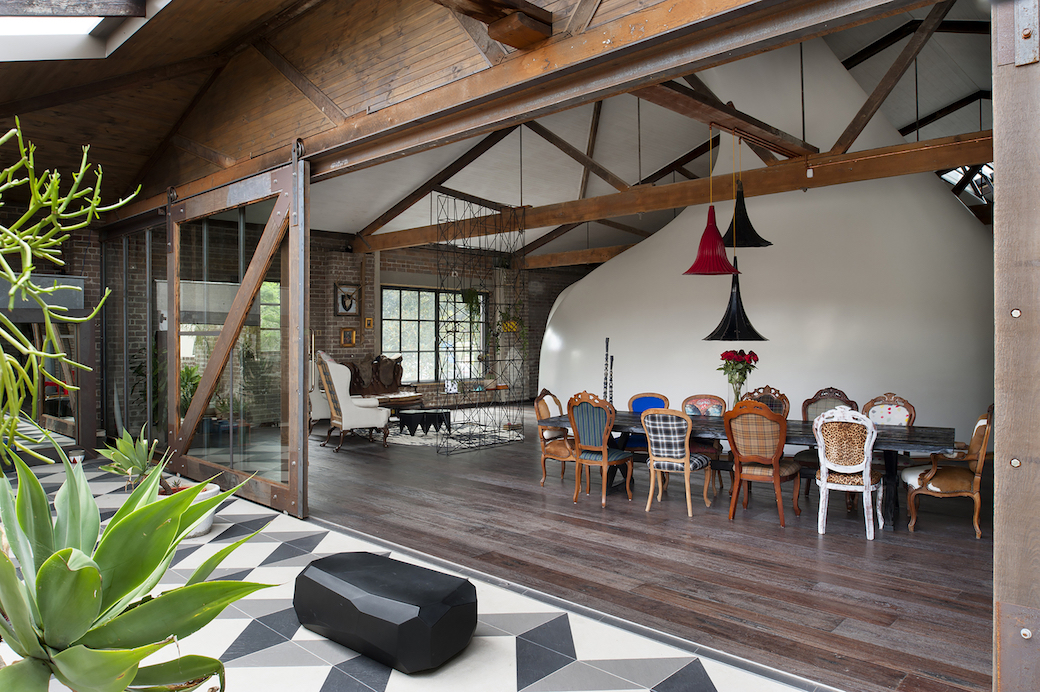 This project was shortlisted for the prestigious World Architecture Festival Awards in 2015. You can find more photos and floor plans for this warehouse conversion on ArchDaily.

All photography by Castle+Beatty via ArchDaily.