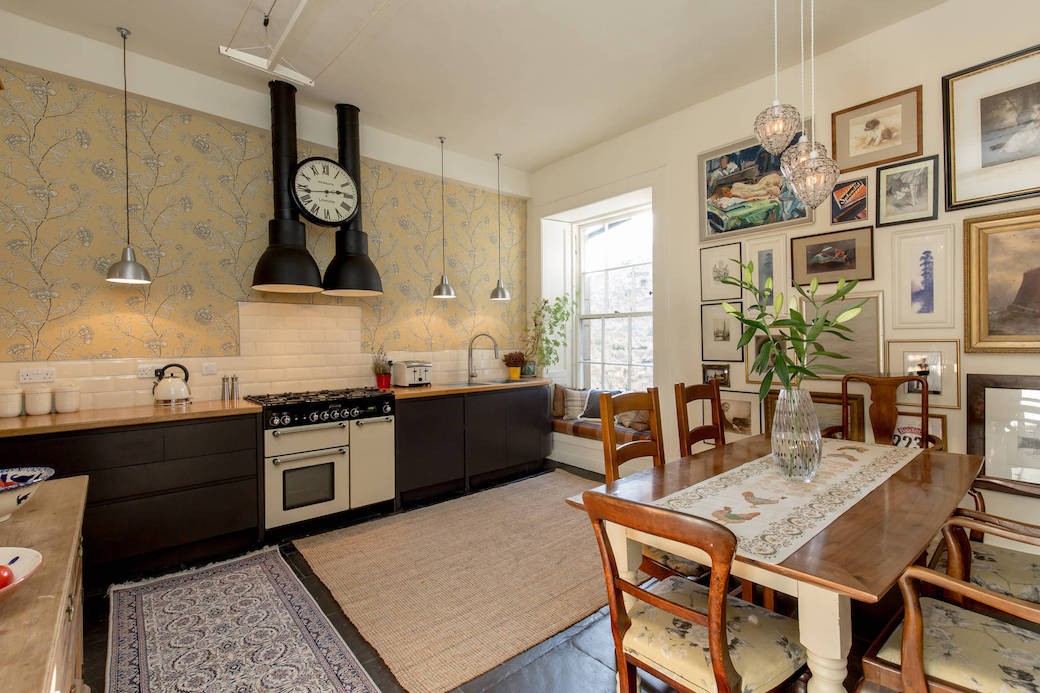 I’ve said it before and I’ll no doubt say this many times again, but some properties just grab you with one single space – that one room that connects with your taste or feels inspiring in some way. And so it was when I first opened the photos by SquareFoot of this property in Edinburgh’s Stockbridge area and saw the kitchen and dining space. I love an eclectic mix in a kitchen, and this room has so much personality and character, from the Georgian flagstone floor scattered with rugs to the entire art wall in the dining area, to the unexpected contrast of the Chinese Peony wallpaper from Sanderson against the industrial-styled black extractor. 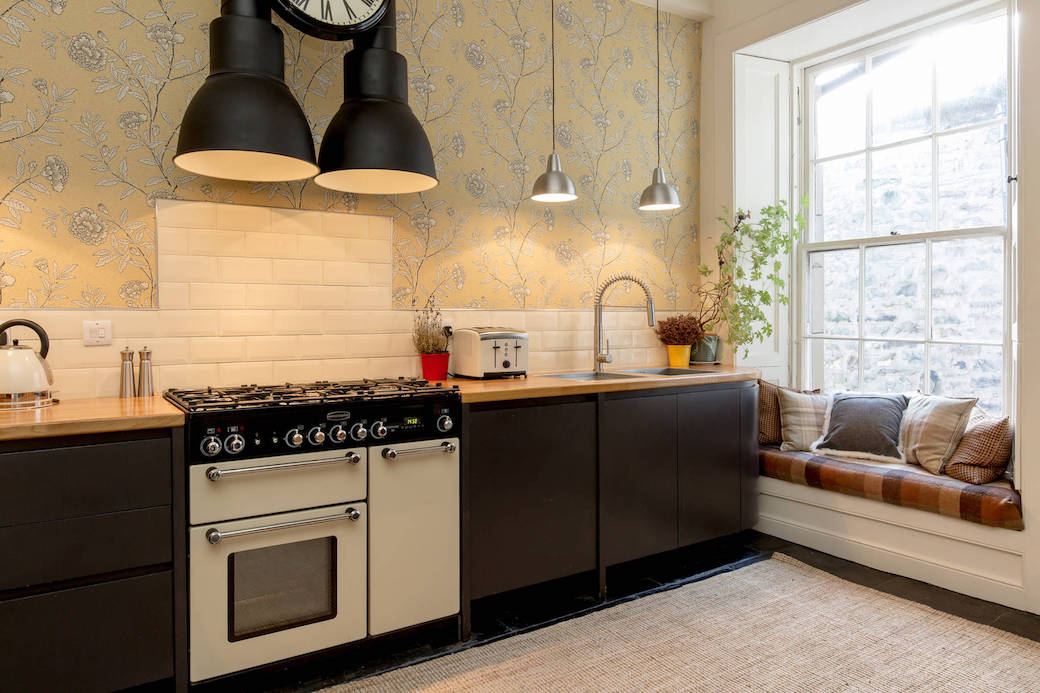 This top floor flat on Hamilton Place is currently on the market with Coulters. Owners Grant and Rebecca Brooks bought the property in 2011, moving from another flat they’d renovated nearby on Henderson Row. Grant is the first to admit that he gets itchy feet as soon as a project is completed and starts thinking of what’s next – he’s currently working on a cottage in the Highlands – and here he took on a complete renovation project where every room needed an overhaul. 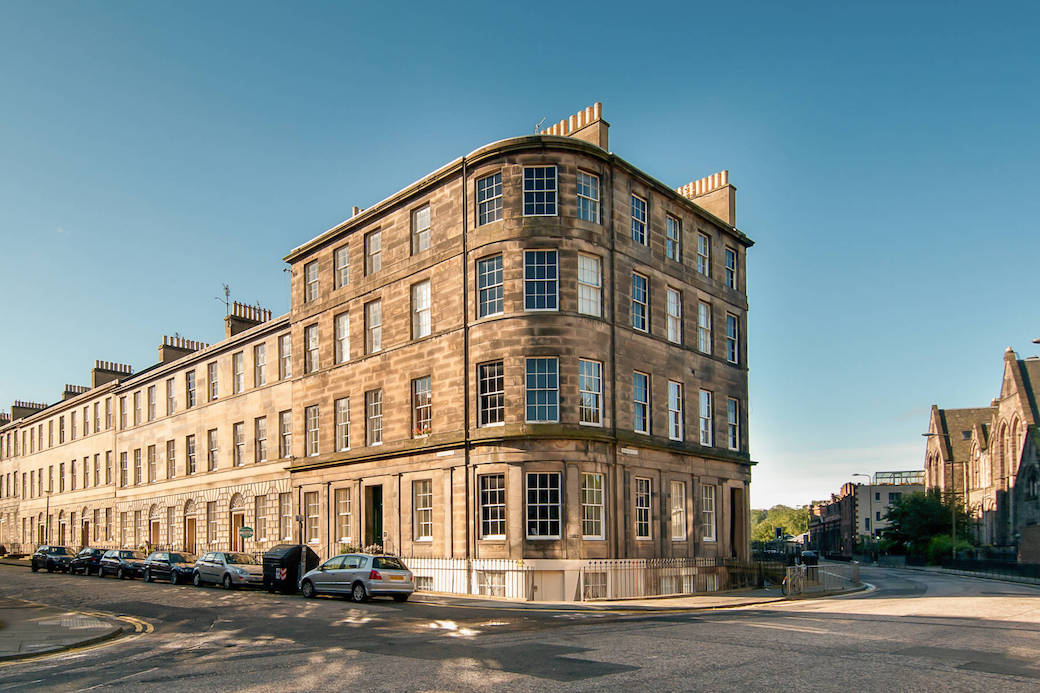 This flat had been a multi-occupancy rental previously, so the interior was tired. The kitchen hadn’t been touched for years. As Grant says: “It was a nicely made kitchen, but it was probably made in the 1960s.” He stripped the space out and reconsidered the layout, opening up the window area to create the window seat, with a stretch of floor units extending along one wall. Grant also had to replace some of the original Georgian flagstones that had been damaged previously when the drainage was laid.

As there was a utility room off the kitchen, which Grant redesigned as a combined utility and larder, the kitchen itself didn’t require a lot of additional cabinetry for storage. Grant had a clear idea of the look he wanted for this space. “I knew I wanted these low hanging pendants and this slightly industrial look, and I’d chosen this Sanderson wallpaper even before we’d seen the flat,” he says. 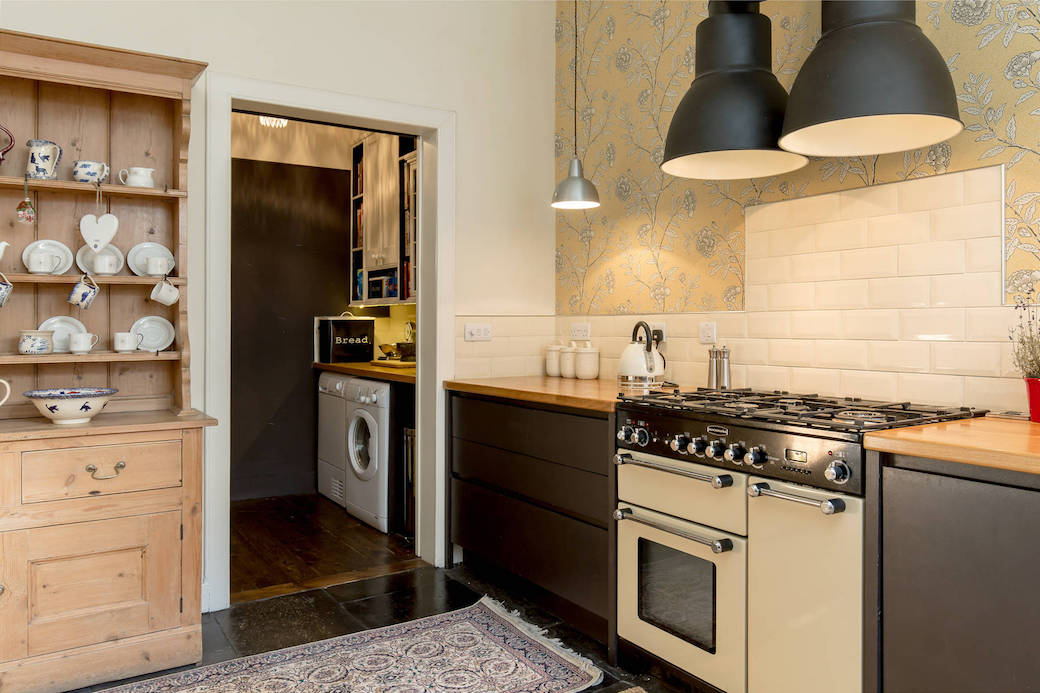 The most unexpected feature, perhaps, is the extractor. When I first saw these photos it struck me that I’d never seen anything like this before – where had Grant sourced this piece? It turns out that he’d made it after spotting a similar design in a house featured in an American design magazine. “That gave me the idea of using the light shades,” he says, and this version was made using two ventilation pipes combined with two IKEA pendants. Ingenious, right? The clock was the finishing touch – it simply hangs on the hardware that holds the two columns together. 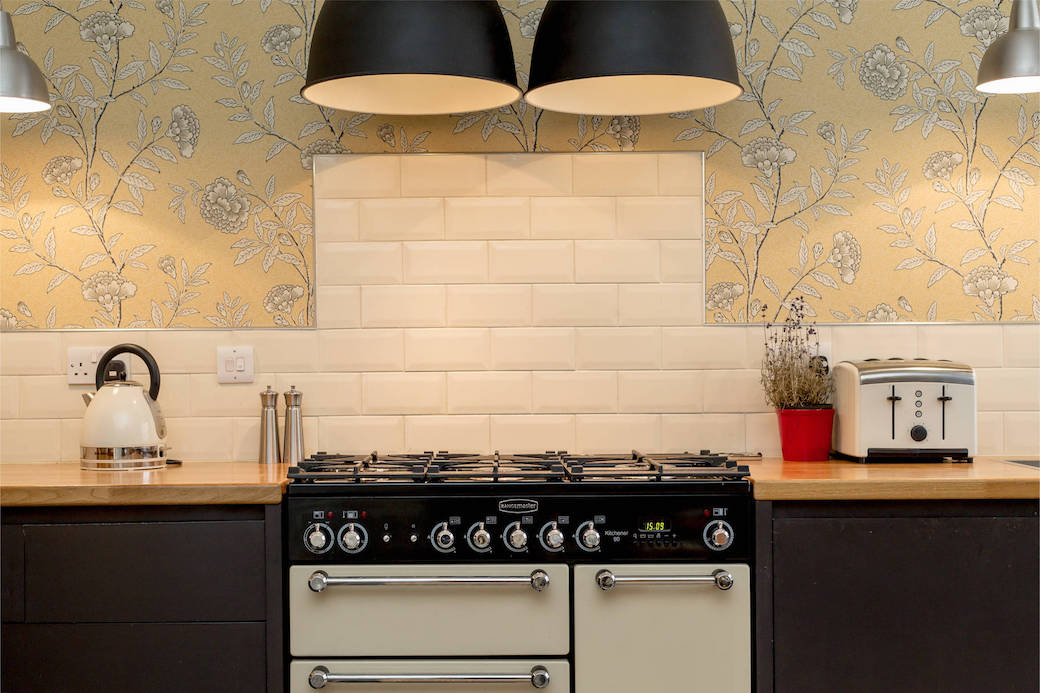 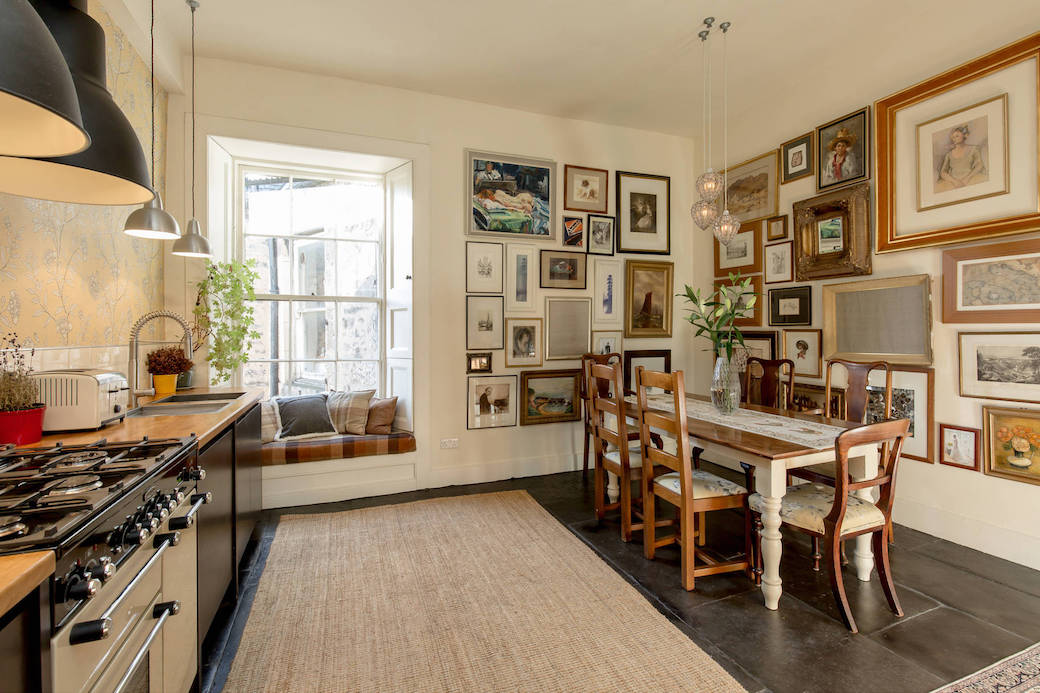 Because Grant enjoys the process of making something bespoke, he’s always thinking of ways to introduce these individual elements into a space. Would I think of doing something like this? In all honesty, no – I’d be online searching for an extractor I liked the look of, but this space demonstrates the value of thinking outside the box.

As for the rest of this interior, Grant redesigned every room with that same attention to detail, and he wasn’t afraid to be bold with colour or print. Consider the sitting room, which the couple initially painted in a neutral hue before Grant decided to add impact, and highlight the height of the space, using a printed wallpaper he spotted in Jeffreys Interiors. 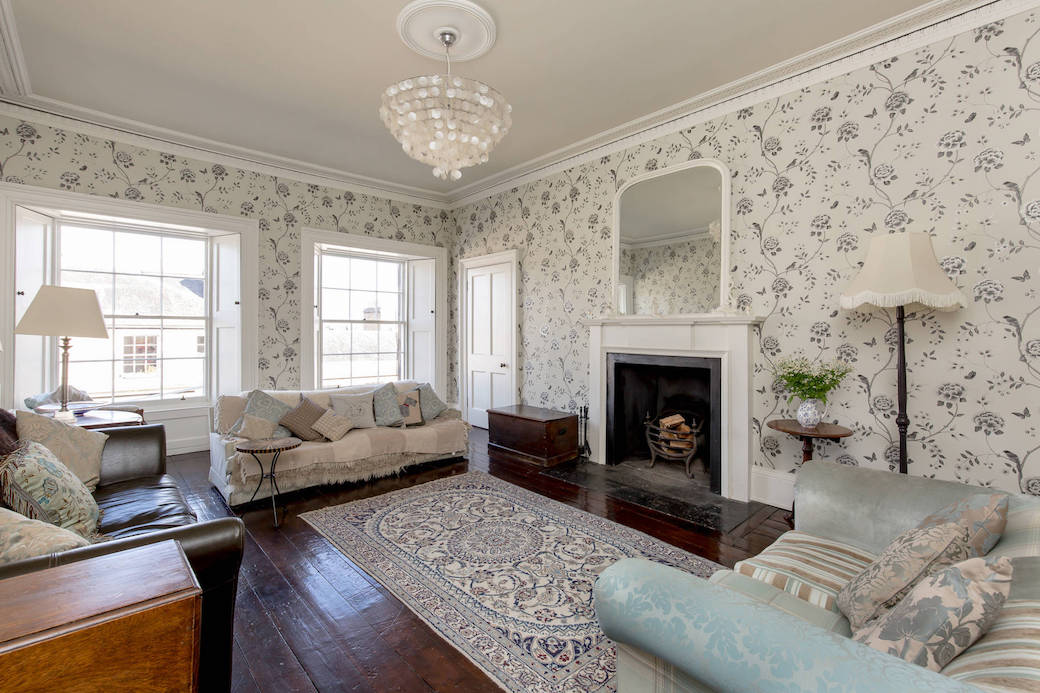 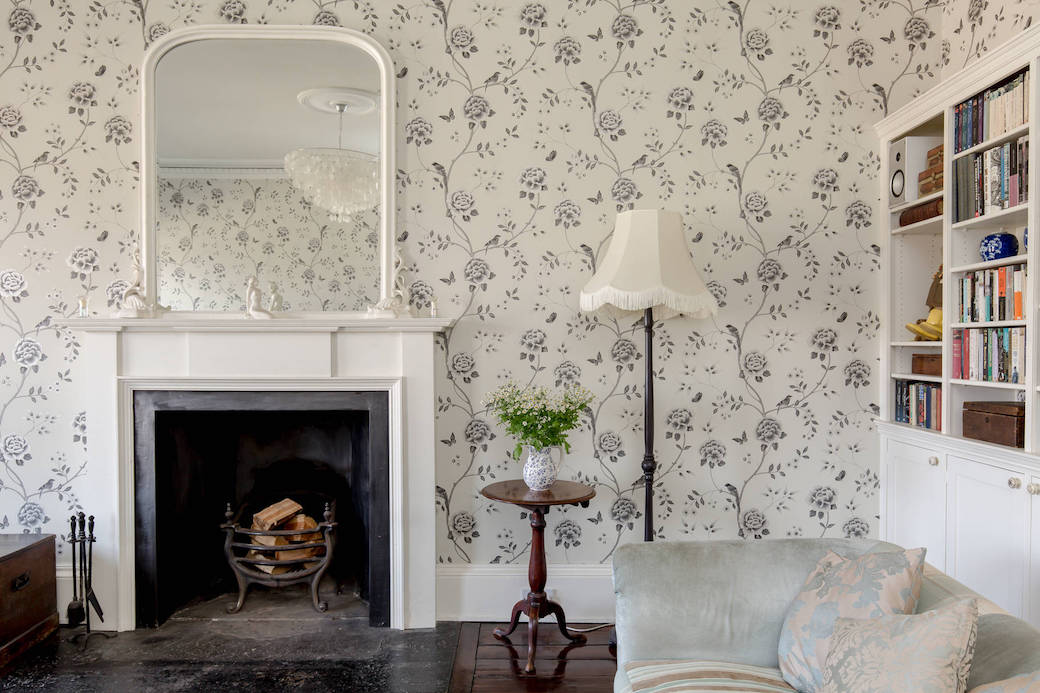 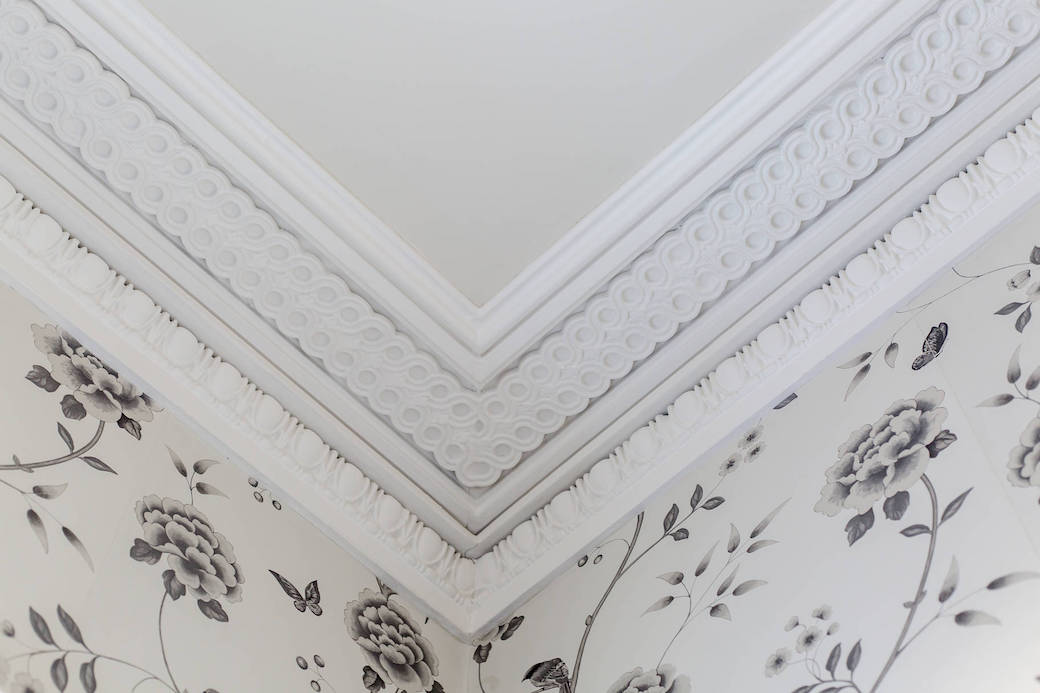 Also note the fireplace here, which Grant reinstated, with an open fire – a simple and classic response, which is right for this Georgian property. I also interviewed Grant about the couple’s previous flat back in 2011, and at the time he spoke about his desire for authenticity. “You’re almost working to a negative effect where there’s no sign of the work you’ve done,” he said, and the same is true here as, wallpaper aside, thanks to its period detailing and stripped timber floor, this room feels original. 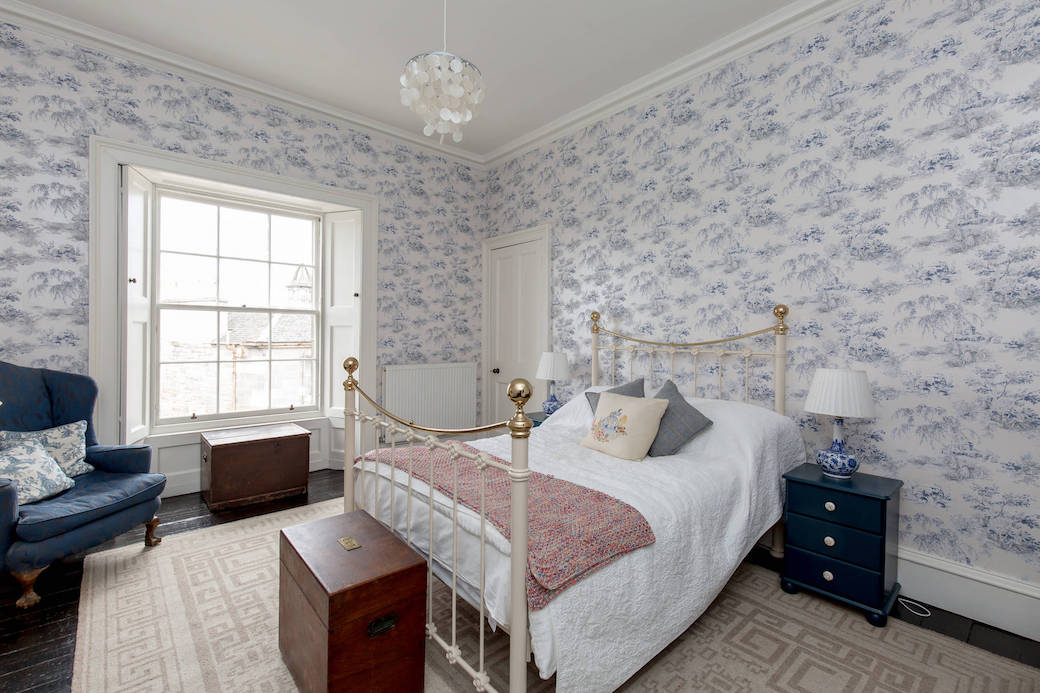 Yet consider that every room in this flat previously had Artex on the ceiling, and that Grant had to scrape back layers of paint from the original 200-year-old cornicing, and you begin to appreciate the hours and days and weeks of work that have been poured in here. This interior took two years to complete. As Grant says, “Because you’re starting with something that inherently has merit, you know you’re going to have something really nice at the end.” 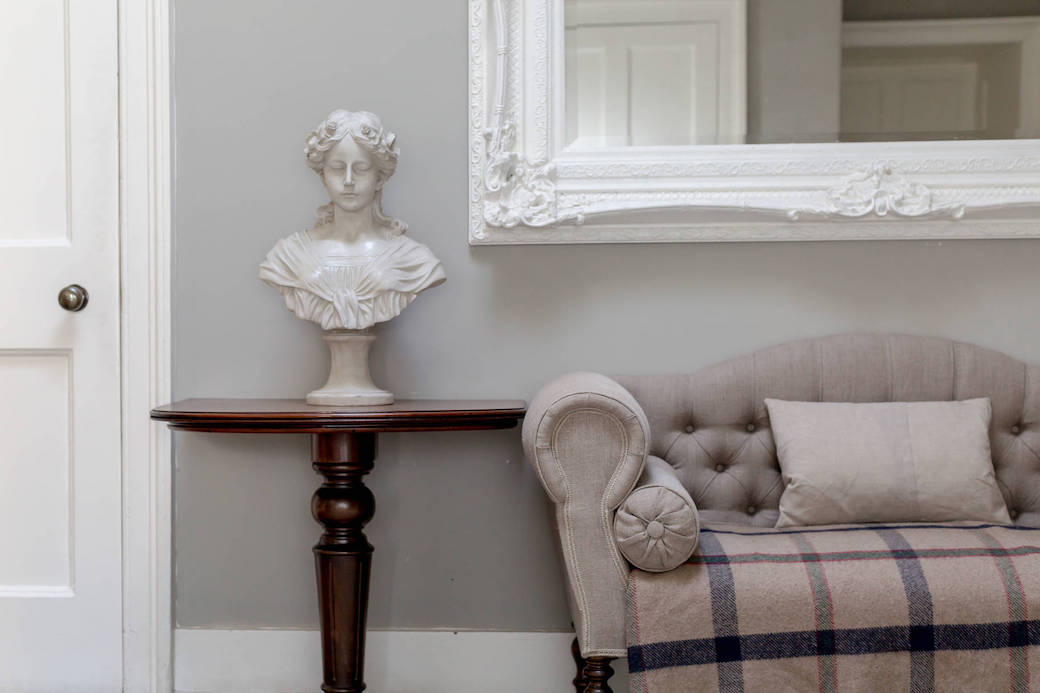 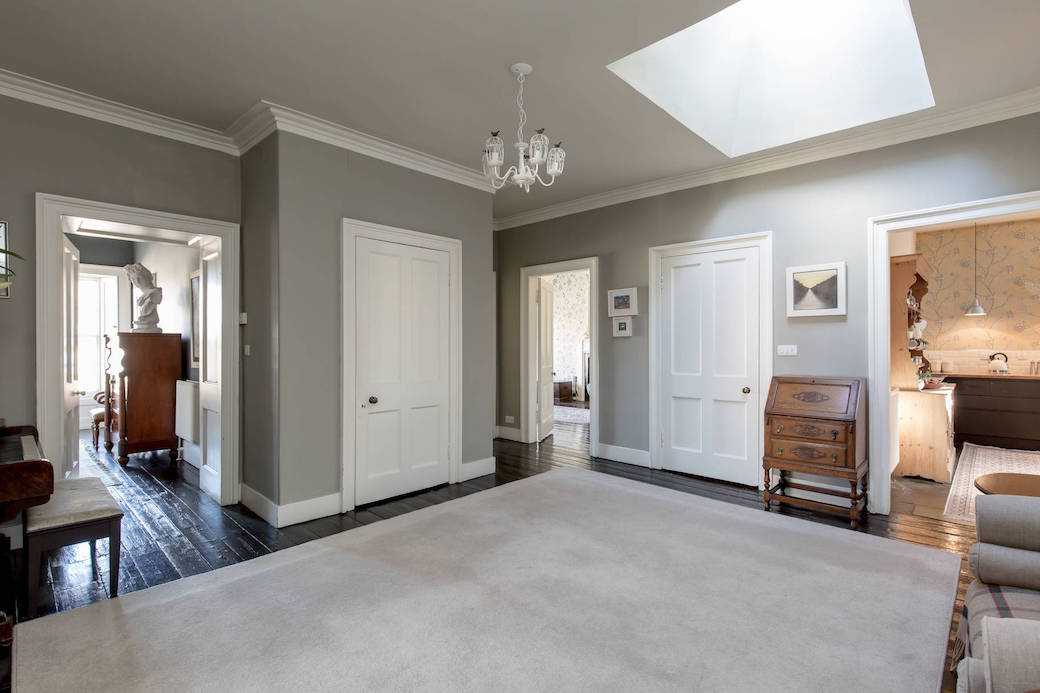 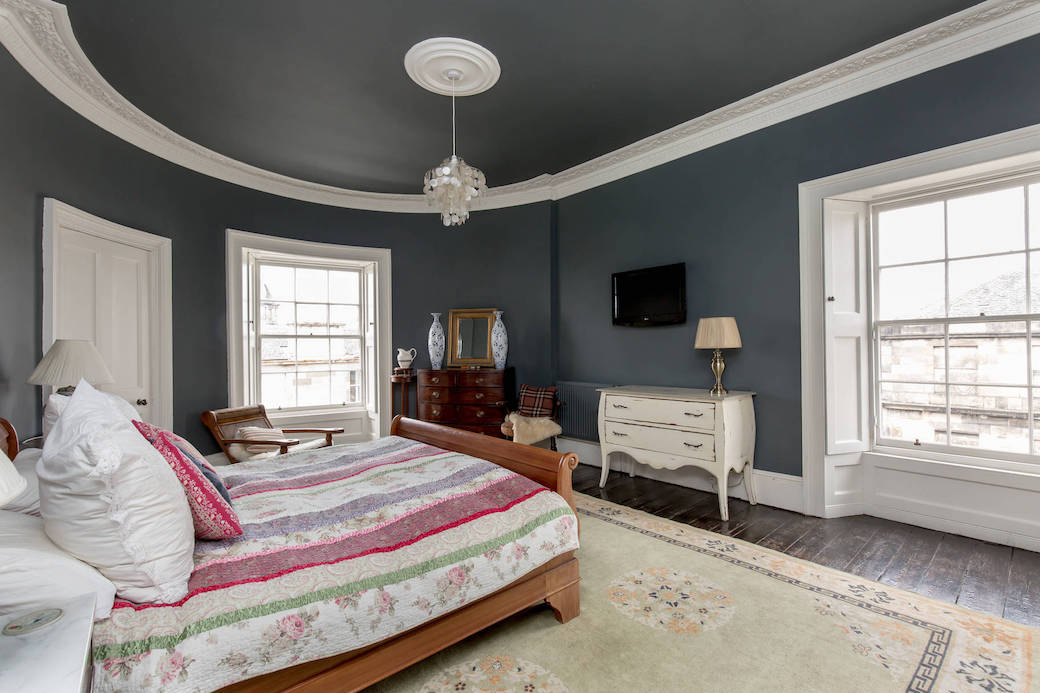 One idea I’d definitely be taking from this flat – aside from the dark grey walls in the main bedroom above (which you already know I love!) and the art wall in the kitchen – can be seen in the bathroom, where Grant clad the walls in tongue-and-groove panelling which he painted in Farrow & Ball’s Off-Black in a Dead Flat finish for a super-matt effect. While I’d partner this with subway tiling, Grant chose a beautiful large profile marble tile for added drama. This marble was an investment, but Grant balanced out the budget with canny sourcing, including the freestanding Norfolk bath from Bathstore. As he says, “It’s about how you use the pieces.” 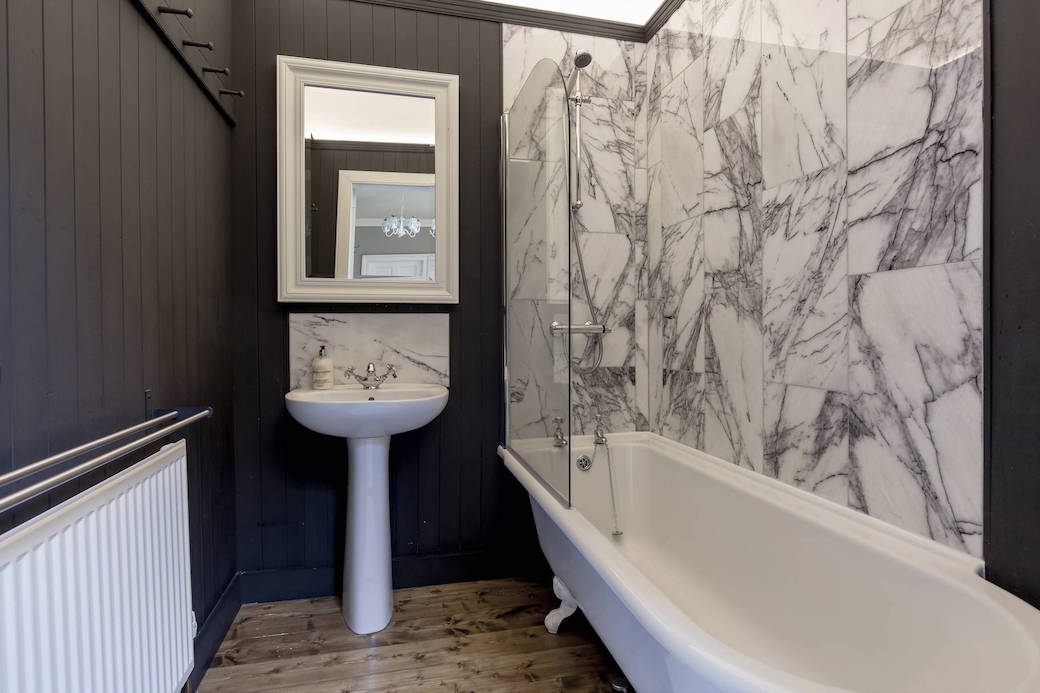 I’m clearly not alone in admiring this flat as Grant and Rebecca picked up the ‘Best City Home’ award in the Period Living Readers’ Home Awards 2016. With this flat now on the market, the couple and their cockapoo Alfie are looking for another Georgian property in Edinburgh – and another project for Grant. Watch this space.

This property on Hamilton Place is on the market with Coulters.

All photography by SquareFoot.

coultersEdinburghGeorgianinteriorskitchenpropertyrenovationscottish property of the week