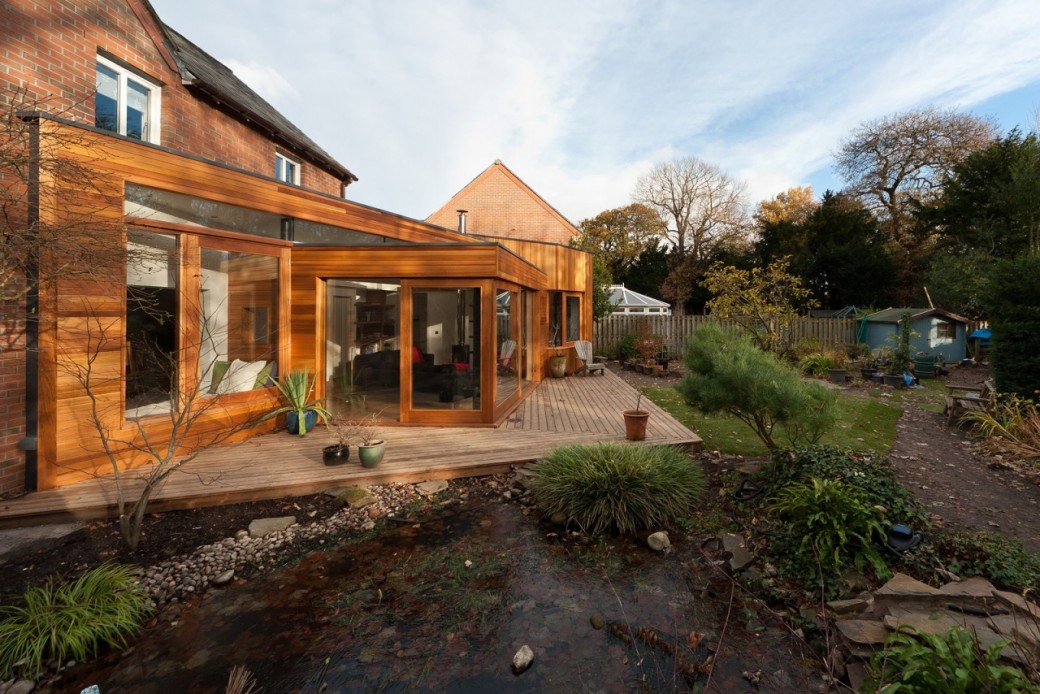 Arriving outside this detached house in Eskbank in Midlothian in Scotland, there is literally no indication of the exciting, geometric, light-drenched space that waits at the rear of the property. The house was built thirteen years ago as part of a small development, and occupies a corner site with woodland along its southern boundary. Due to the way the property is positioned on the plot there are two large gardens, but the existing house felt disconnected from both. There was simply no indoor-outdoor flow. 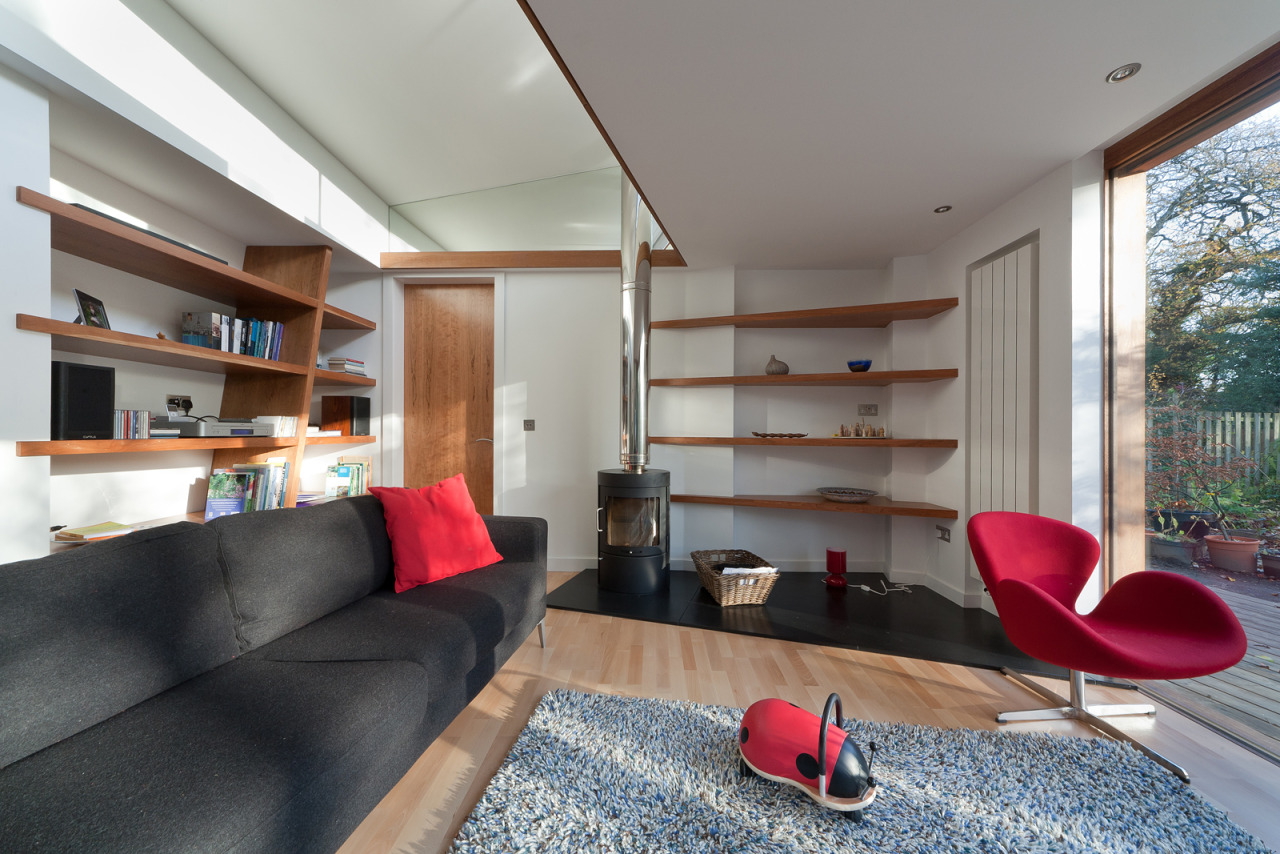 The owners made various improvements to the house over the years, removing a wall to create an open plan dining-kitchen and adding French doors to both the main sitting room and a smaller seating area alongside the kitchen – all helping to create that sense of flow and connection.

Still, as they realized five years ago, the house needed more, which is when they contacted architect Craig Amy, who had recently launched his own practice at the time. Their brief was to open the house up to the garden, creating an extra space that the owners and their three children could use throughout the day, along with an additional guest bedroom and en-suite, and a new study area. 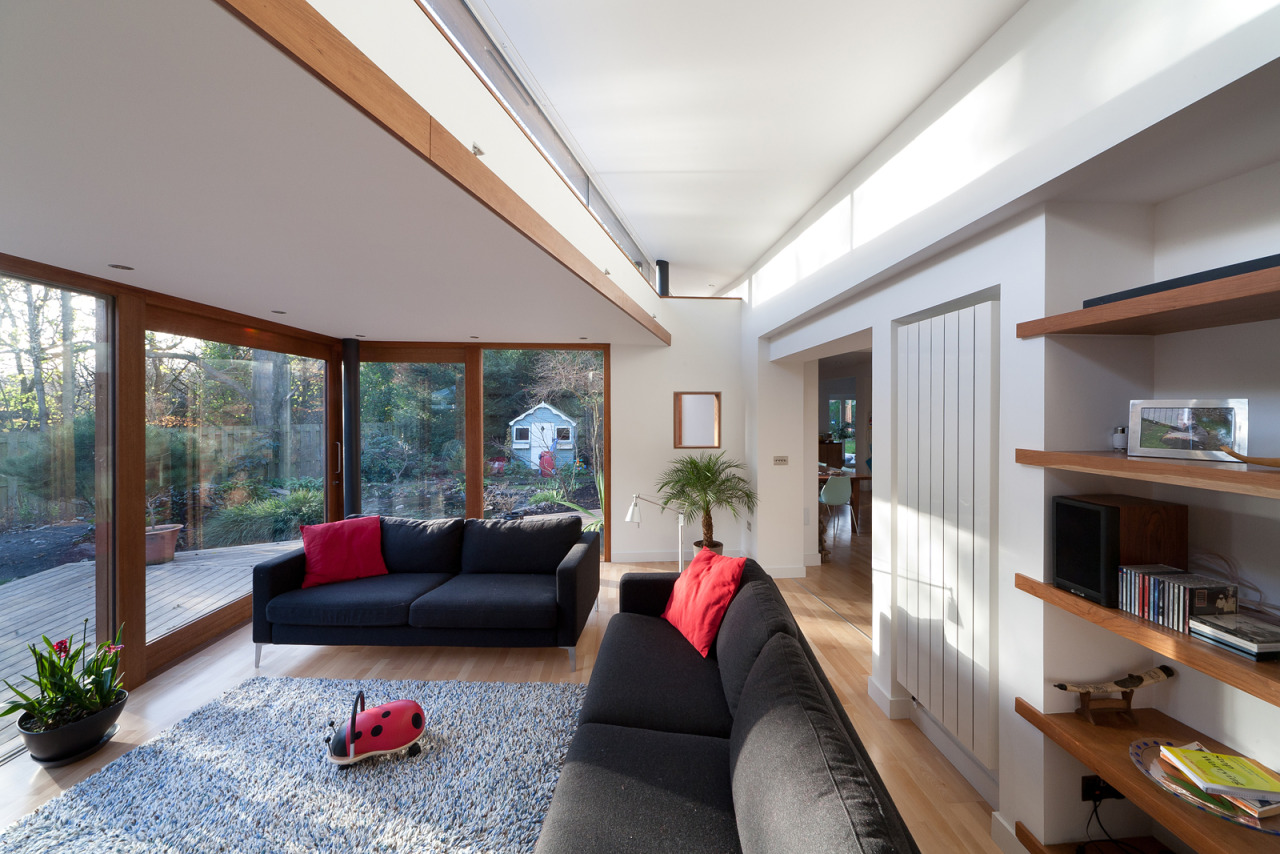 The result is a striking extension based around a triangular form that connects the various elements. The garden room is open plan to the kitchen and dining area, creating that much longed-for flow. A clerestory adds drama to the new space, which is flooded with light, while sliding doors spill the interior out onto a decked terrace and into the garden. The new guest bedroom feels private as it’s tucked away from the main body of the house, while the guest en-suite and a utility room were created by ‘borrowing’ space from what was originally the garage. 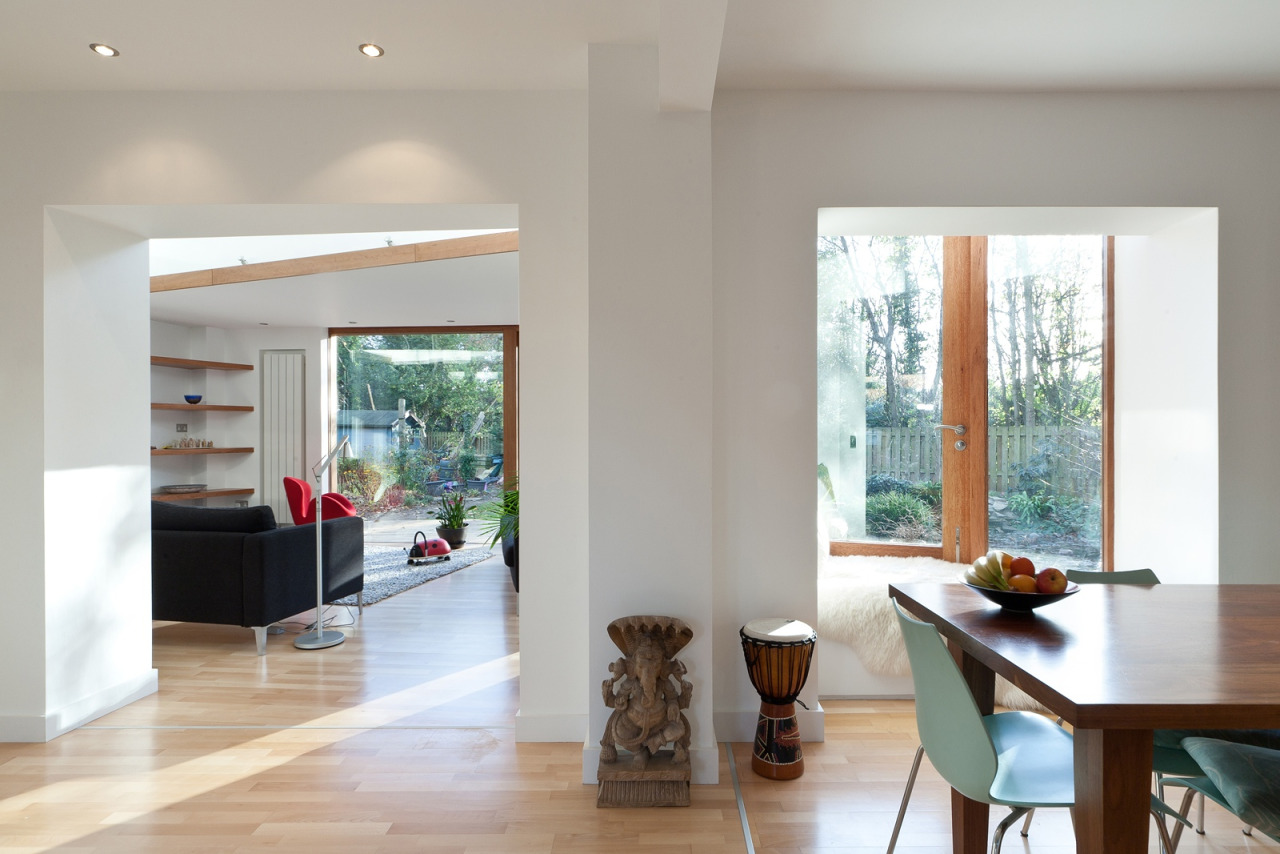 What did you feel the original house was missing when you first visited?

I always find it amazing that you can find a modern house of this size, but it’s still lacking the space for how a family lives today. My clients wanted a space where they could look out to the garden while sitting in front of the fire, and they wanted both this area and the study to be orientated towards their favourite beech tree in the garden. They also wanted a bay windowed seating area within the garden room. 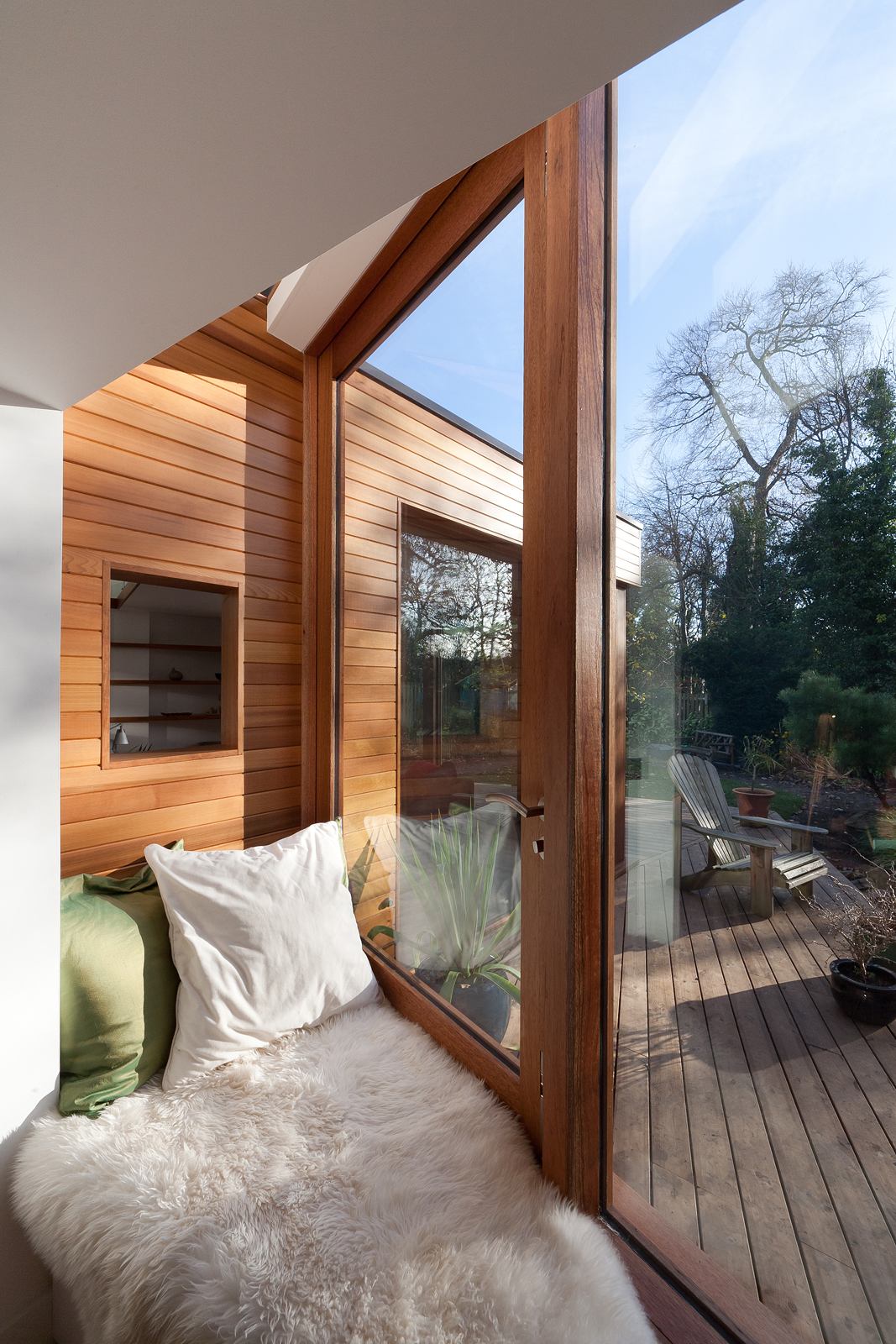 How did the design ideas evolve?

From the outset, my clients had one project they loved – the Wrap House by Alison Brooks Architects. I had that image from day one, and that gave me the freedom to be a bit more expressive here. They particularly liked the use of wood on the Wrap House and the feeling of space. We’d batted ideas back and forwards, and then the design came to me one Saturday night sitting in front of the telly with my Google SketchUp. I sent it to my clients that night and got an instant email back saying, that’s it. The design did evolve, but essentially that initial sketch is what we’ve ended up with. 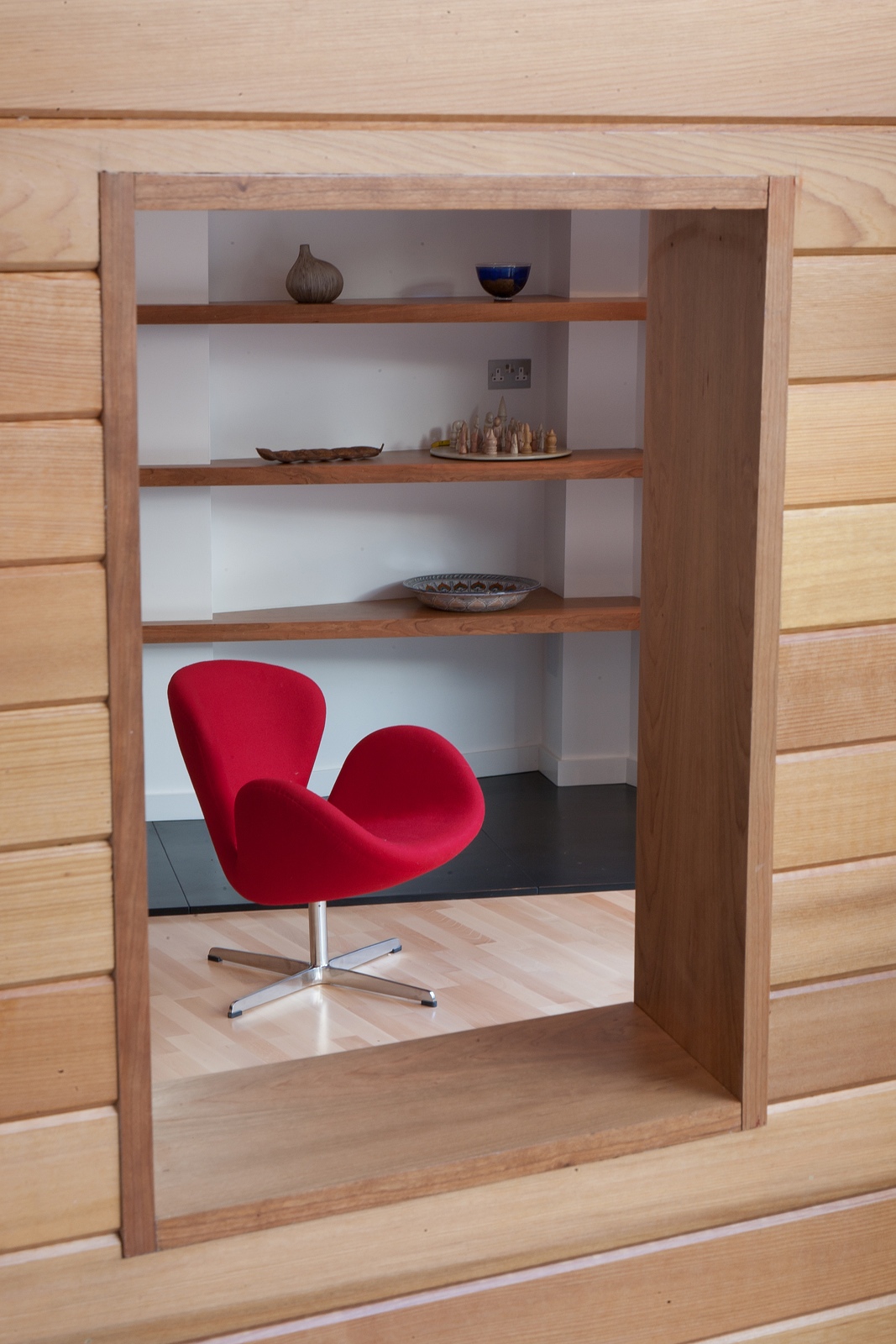 How did you decide on the materials used?

We originally looked at using the same timber finish as was used on the Wrap House, but my clients weren’t as keen when they saw the samples in the flesh so we looked at other options. My original sketch had three different timbers for the three elements – the garden room, the bay window and the bedroom. We were looking at zinc both for the study box and the roof, but that idea was dropped in the cost saving process. In the end we used FSC-certified Western Red Cedar, which really complements the red brick of the house, with the windows and doors in Meranti. The roof is finished in a dark grey Sarnafil membrane, while the study box is defined in vertical cladding. 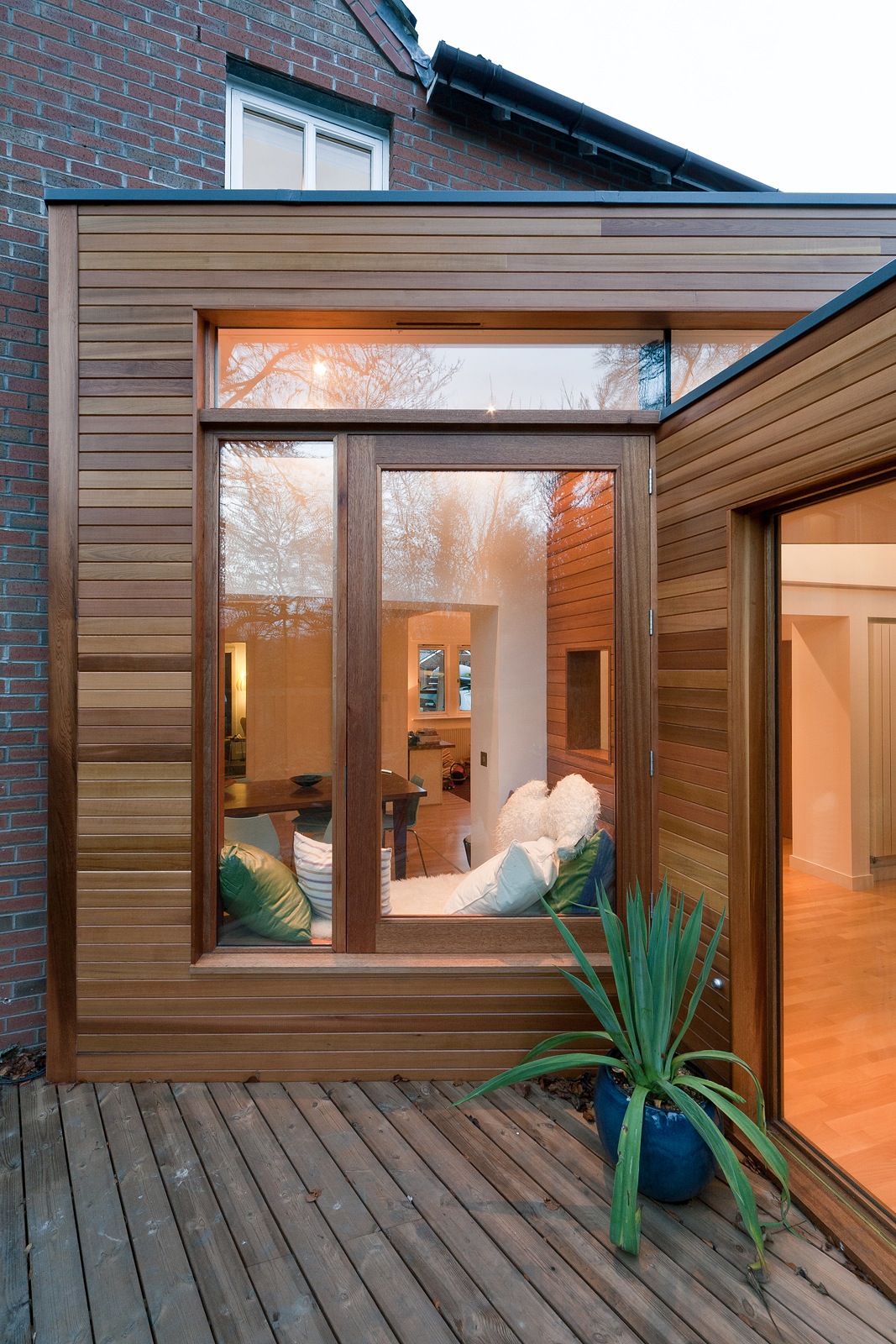 Were there challenges during the six month long build?

The build itself was no bother at all as we were working with Inscape Joinery, who are used to complex projects. We had a big issue with the foundations though. This development is in an old mining area and all the houses have massive foundations, only we didn’t know that until we started digging, so we had a bigger and more complicated dig than expected. That impacted on the budget so we made sensible savings – removing the zinc alone from the plans saved £15,000. 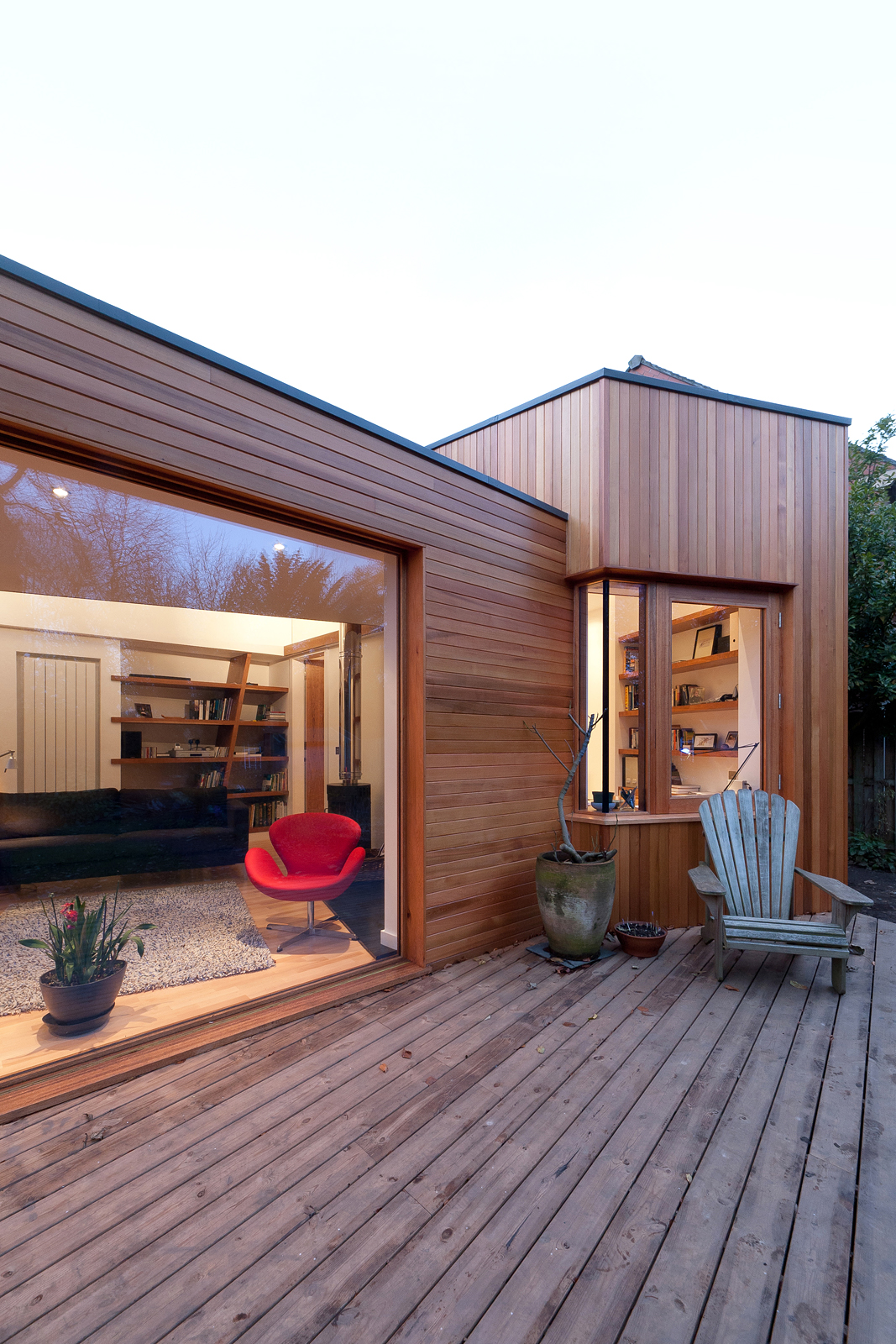 How has the extension transformed the house?

The way my clients use the house now is completely different from the way they did before, and it’s even different to how they had imagined using the house once it was finished. The kids essentially have this playground inside they can run around in, while there’s a quiet space to work in and the garden room is great at night with the stove lit.

Do you have a favourite feature of the finished design?

I love the angled bay window – I love the way it looks from the outside. Without the angle, this bay window was a little box; it didn’t look right in the overall scheme. Simply angling this made sense of the whole design and made everything else work. And now, every client wants one! 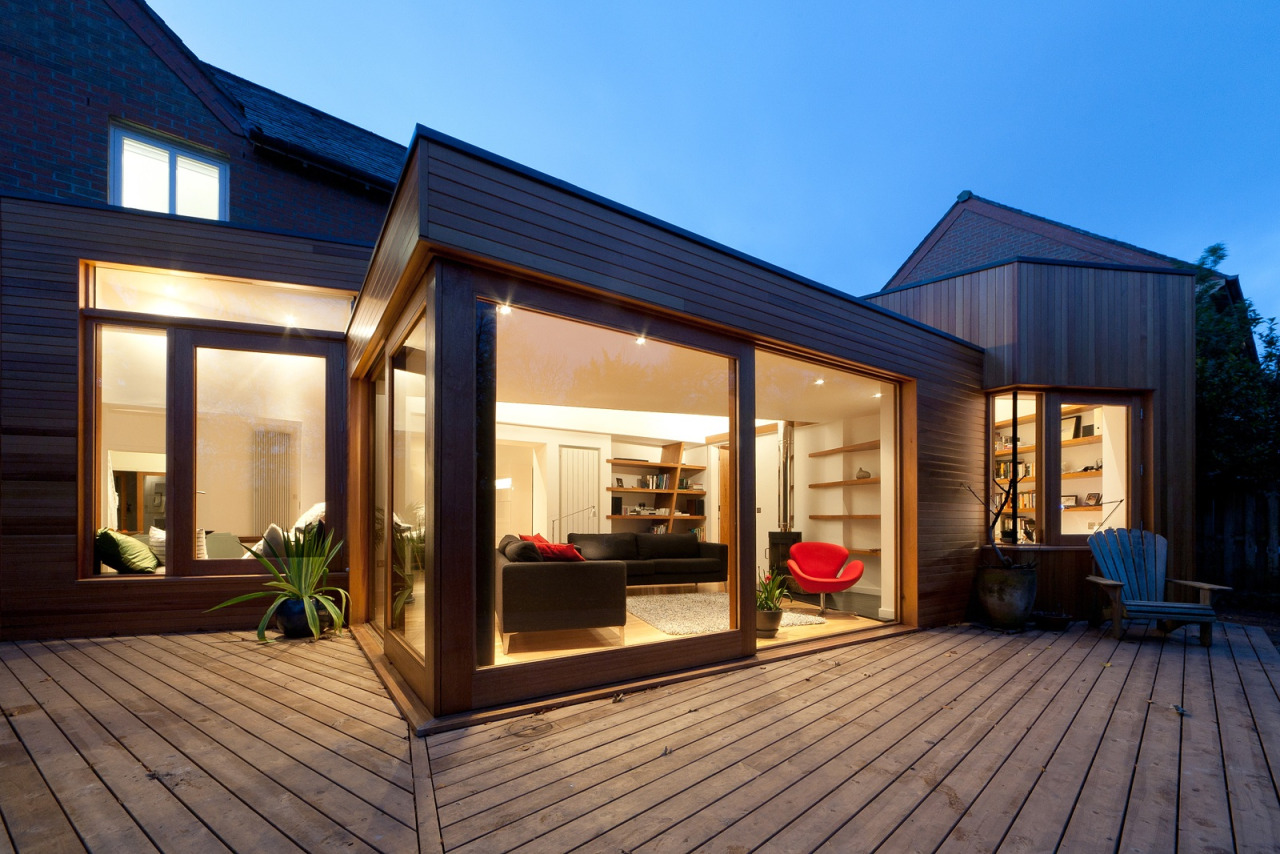