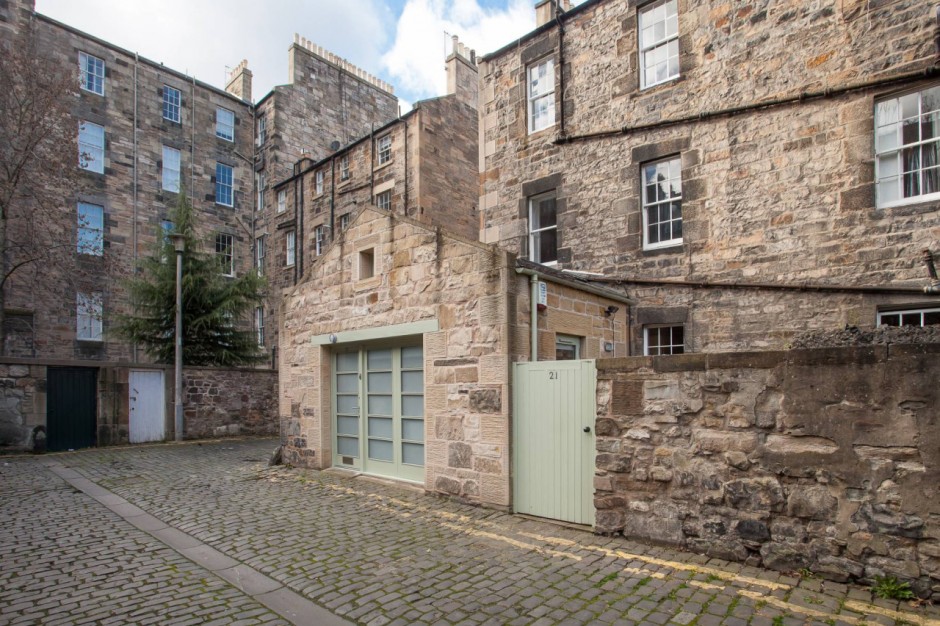 Some properties stick in your mind – and for all the right reasons. Perhaps there’s something unusual about the location, or a clever piece of architecture. Sometimes it’s a house you wished you lived in.

I first visited this house on Cumberland Street South West Lane in Edinburgh’s Georgian New Town back in 2007. The owners at the time, Duncan and Fiona Porteous of Porteous Architecture, had previously been living in Aspen in Colorado and designing large scale houses of up to 20,000 sq/ft that were selling around the $20 million mark. Returning to Scotland during a booming property market – as it was nine years ago – the couple were faced with the challenge of finding something they could afford. 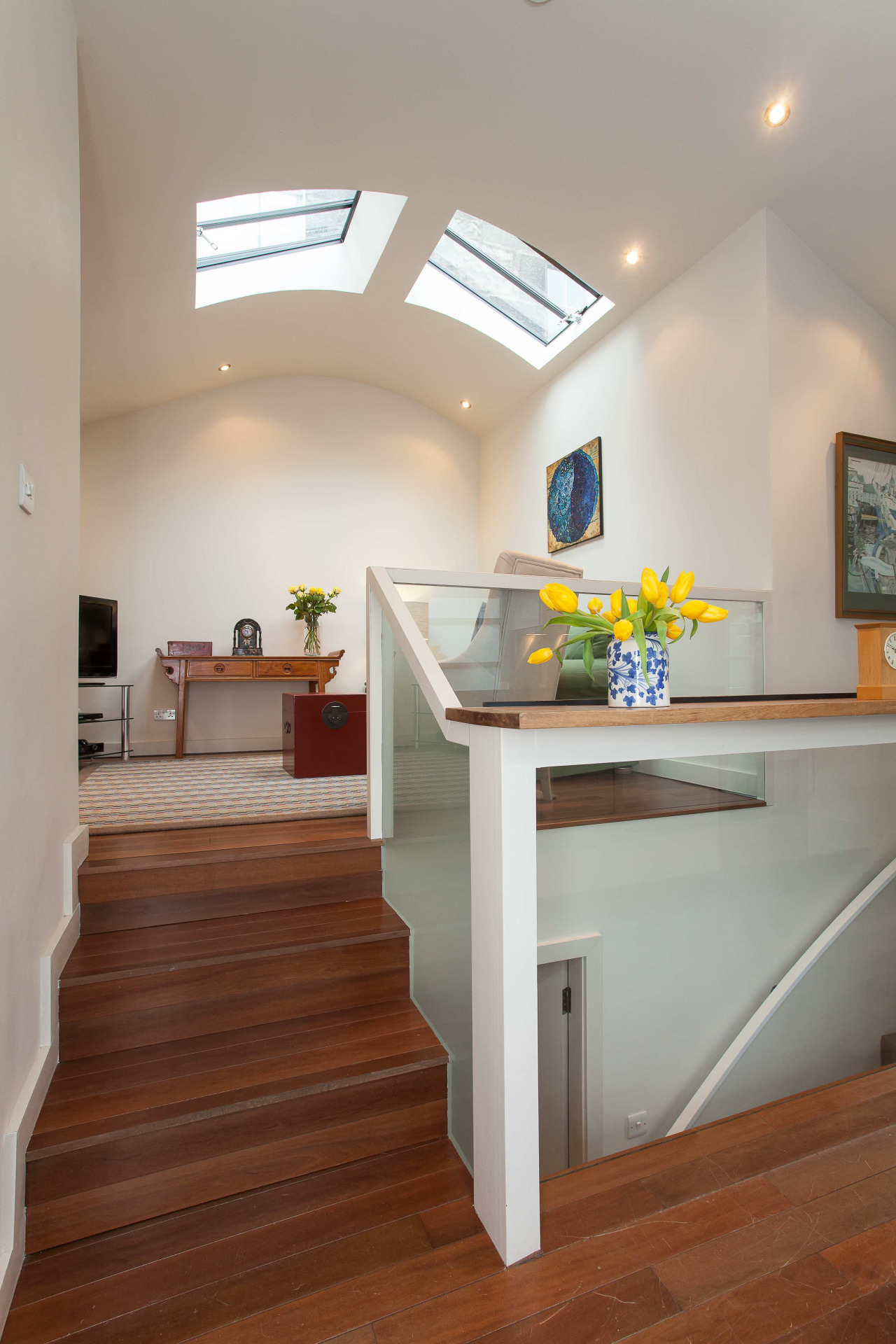 As Fiona said at the time: “We were parachuted into this crazy market and starting from scratch. Budget-wise we could only afford a flat, but we wanted the privacy of our own house. We had to think on our feet to get something different.”

“Something different” is putting it mildly. This site, which is tucked along a cobbled lane, had once contained a woodworker’s workshop with a painter’s storeroom on the lower level, but when the couple looked at the property this entire floor level wasn’t visible. A previous owner had added a garage door to the front of the building and used the space as storage. Other potential buyers had considered developing the site but had deemed it too risky.

By researching the way in which the main Georgian terraces had been constructed back in the 19th century, the couple reasoned that this lower level must have been created and then back-filled over the years. They took a leap of faith and bought the property. Considering all the spatial constraints they were faced with, the design of this house is very clever. The living space is split into vertical layers. You arrive into the sleek kitchen, and a door leads from this space out into the patio garden to the side. A few stairs lead up from the kitchen to the main living area, which features a striking barrel vaulted ceiling punctuated by rooflights. 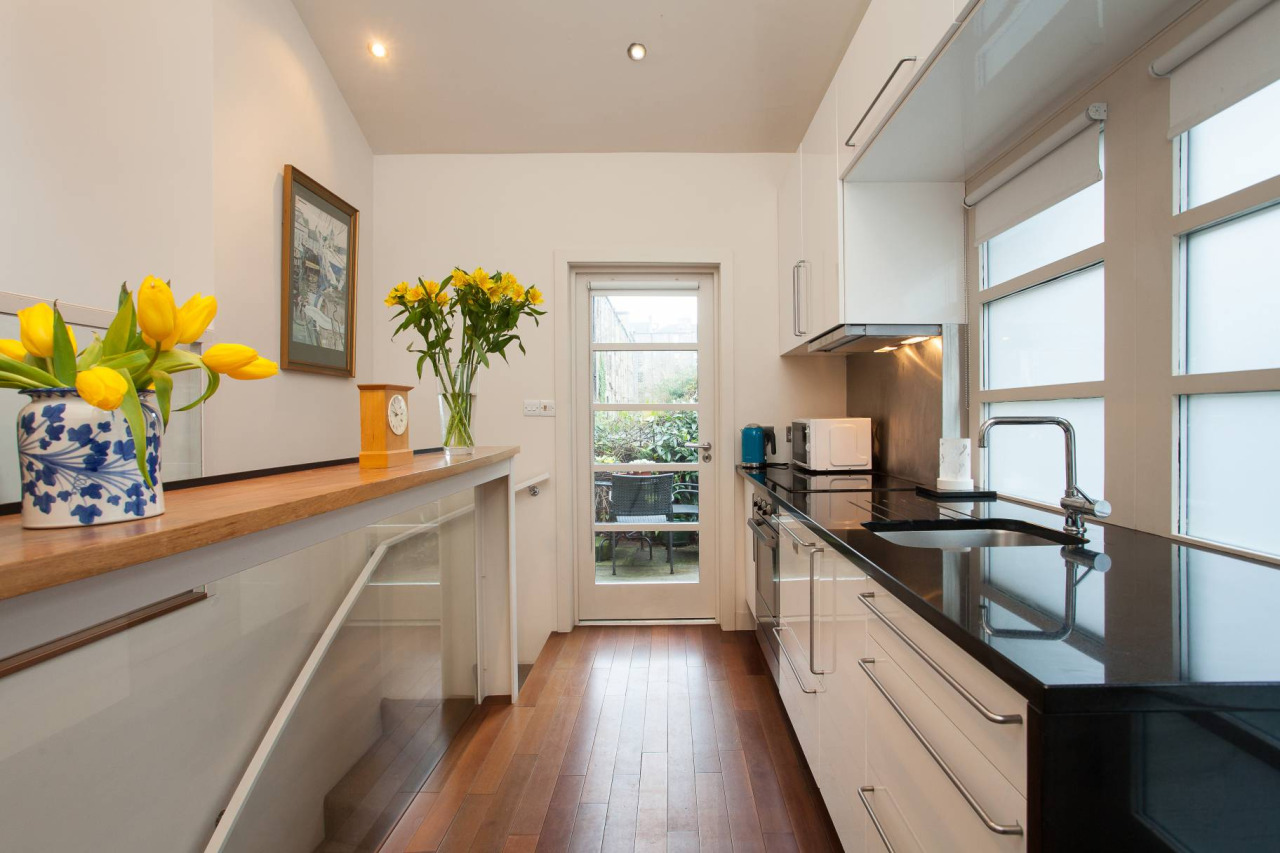 Fiona and Duncan took some design cues from the building itself. During the excavation of the lower level they unearthed the barrel-vaulted cellars, which led them to curve the roof space both upstairs and in the bathroom. They were also influenced by their previous projects: the vaulted ceiling upstairs demonstrates the ridge beam construction method the couple had grown accustomed to using in the States, as opposed to trussed construction which is more common in the UK, and this enabled them to create the open volume without the need for visible structural ties.

There are great finishes, from the warmly toned hardwood flooring on the upper levels to the slate and limestone-effect tiling in the bathroom. The kitchen’s simple and graphic black and white palette is offset by the teak breakfast bar, which was created from an old chemistry lab countertop sourced by Duncan from Edinburgh Architectural Salvage Yard. 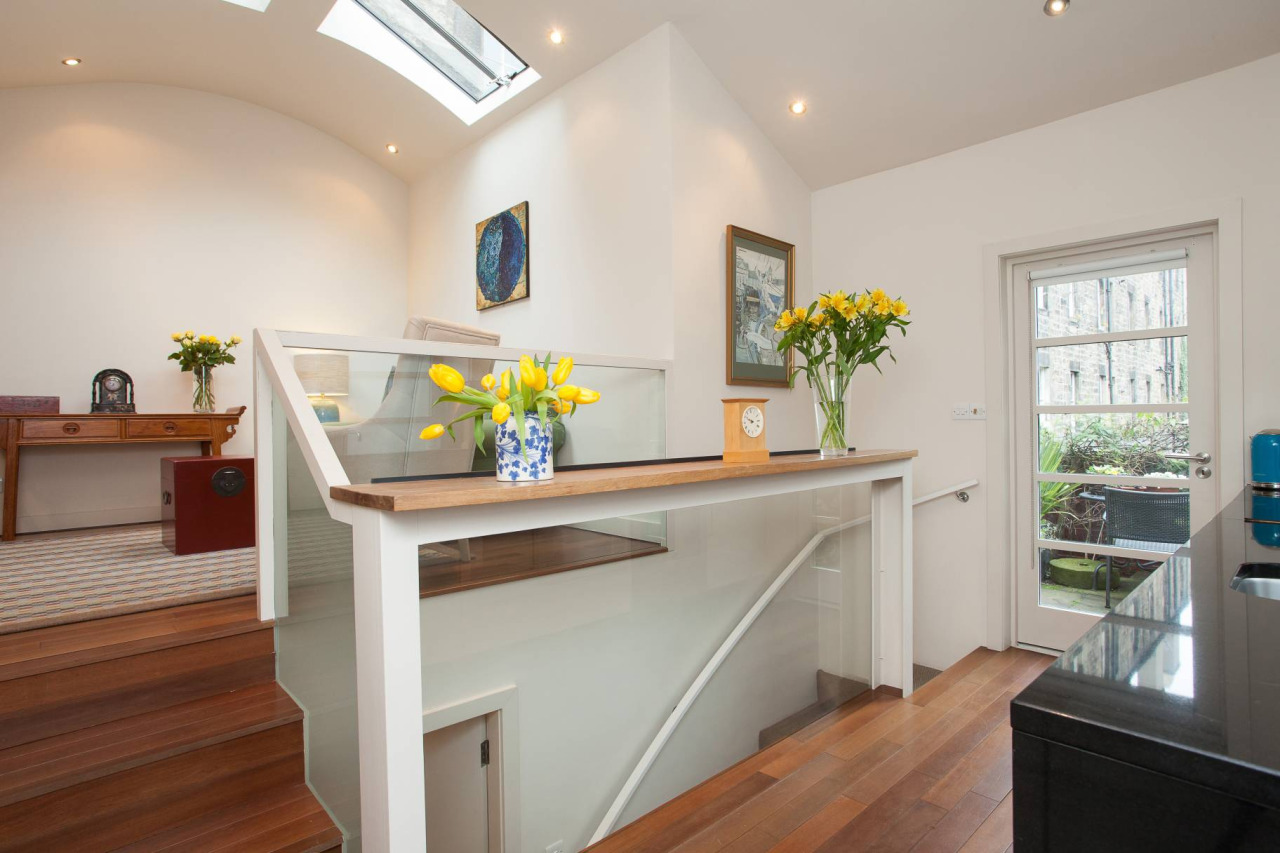 When I first visited this house in 2007, I was immediately taken by the layered space and the way that the interior connected to the garden. And the location. It would be easy to simply focus on the grand townhouses and properties that line the main streets of the New Town, but if you know the city well, you’ll know that there are many interesting buildings tucked behind their grander neighbours, from quirky conversions like this to fantastic mews properties both old and new.

And, to be honest, this was a house I could imagine living in. I’ve written quite a bit over on Copperline about my interest in compact urban architecture. Some of my favourite houses over the years have been constructed on tight urban sites – sites that have necessitated ingenious spatial planning from the architects involved. To me, that’s exciting. I love turning up at a house that looks small, tiny even from the street, particularly when the façade gives nothing away, only to walk into and discover space…. and then more space. 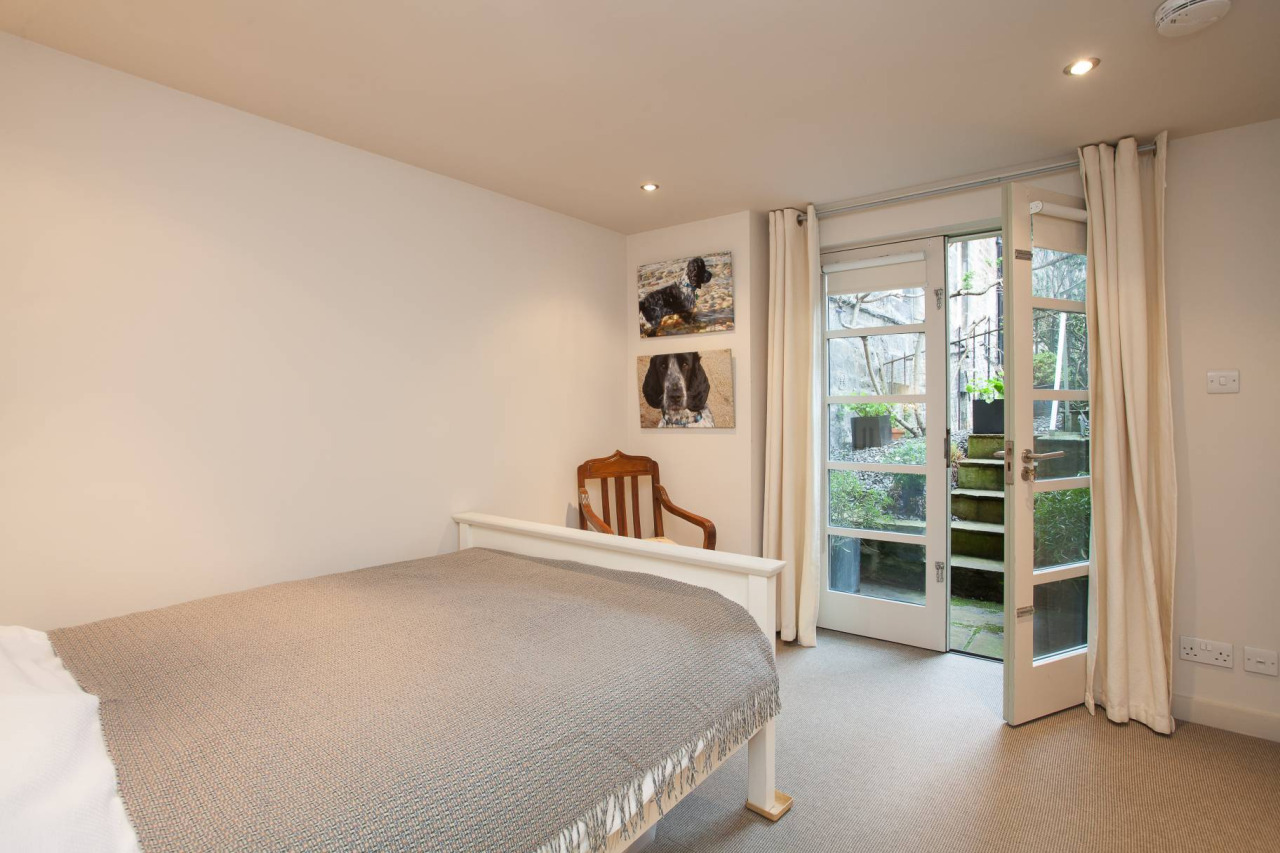 As Fiona said of the design at the time: “You have to engage your creative juices. It was going from macrocosm (in our previous projects) to microcosm here. We saw it almost like a three-dimensional jigsaw. The last thing you want with a volume like this is to box everything off; you need to have free-flowing space and light giving this sense of volume and airiness.”

Little wonder then that Pamela Craig was attracted to number 21 when it was last on the market in 2012 (Fiona and Duncan are now based on the Isle of Lewis in Scotland). Pamela was downsizing from a larger flat nearby in order to gain a garden for her dogs: Springer Spaniel Jay and Jack Russell-cross Flora. As she says: “I was desperate to have my own little outdoor space, and I loved this house because of its design. I just thought it was so stylish and light, and also low maintenance.” 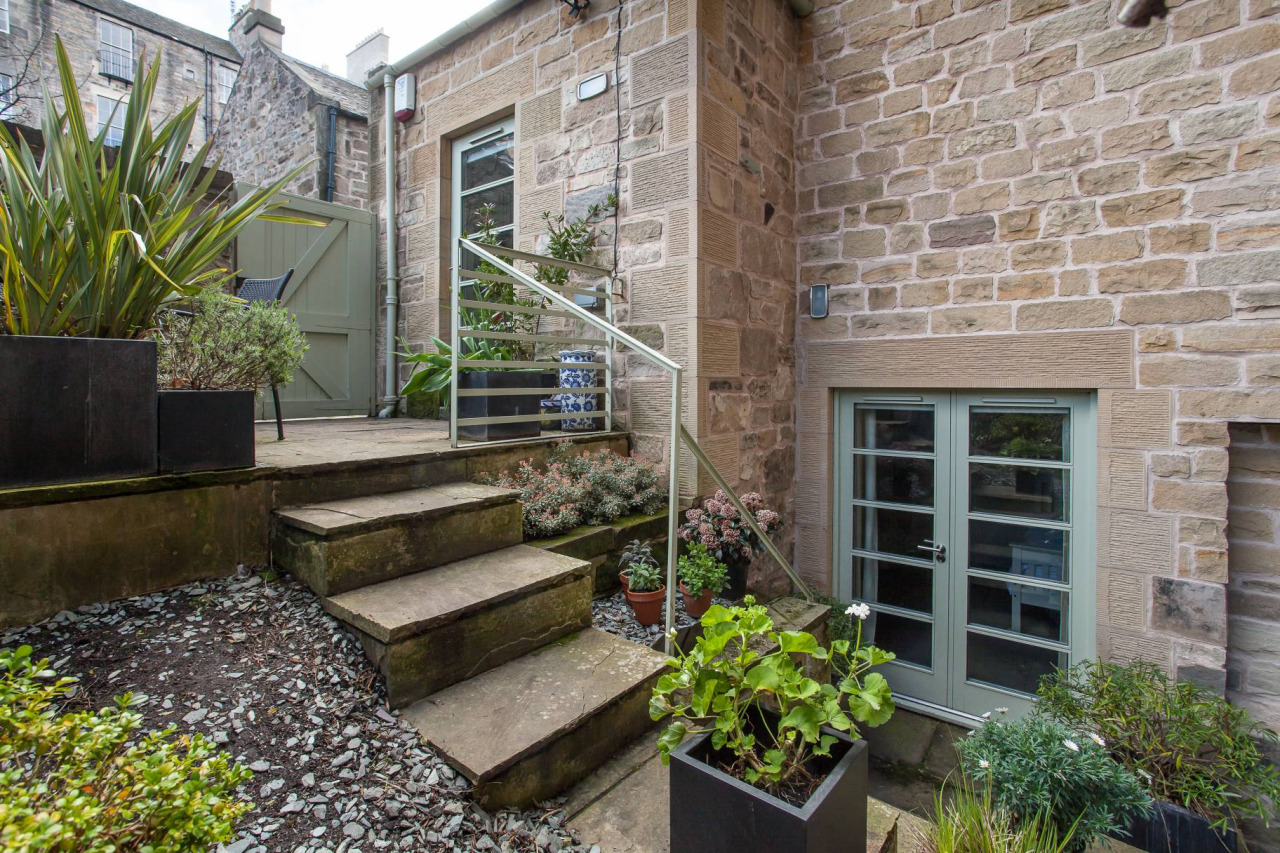 Pamela added the ANTA carpet to the bedroom and on the stairs, and she also made some improvements to the garden. To those of us living in the city centre and hankering for some outdoor space, this split-level garden is a little gem, and it proves that you don’t need to have much outdoor space to completely alter the feel of your home.

For a couple or an individual, this house is the perfect easy-to-manage urban pad, and it would clearly make a fantastic pied-à-terre. For Pamela, this house has also been an inspiration. “I wouldn’t be scared now of trying to take on a project,” she says. “I looked at a house recently – a gorgeous ramshackle one bedroom cottage – and I had a mental picture of how I could change it. It’s about making a small space fit in with your lifestyle. This house has opened my mind to these things.” 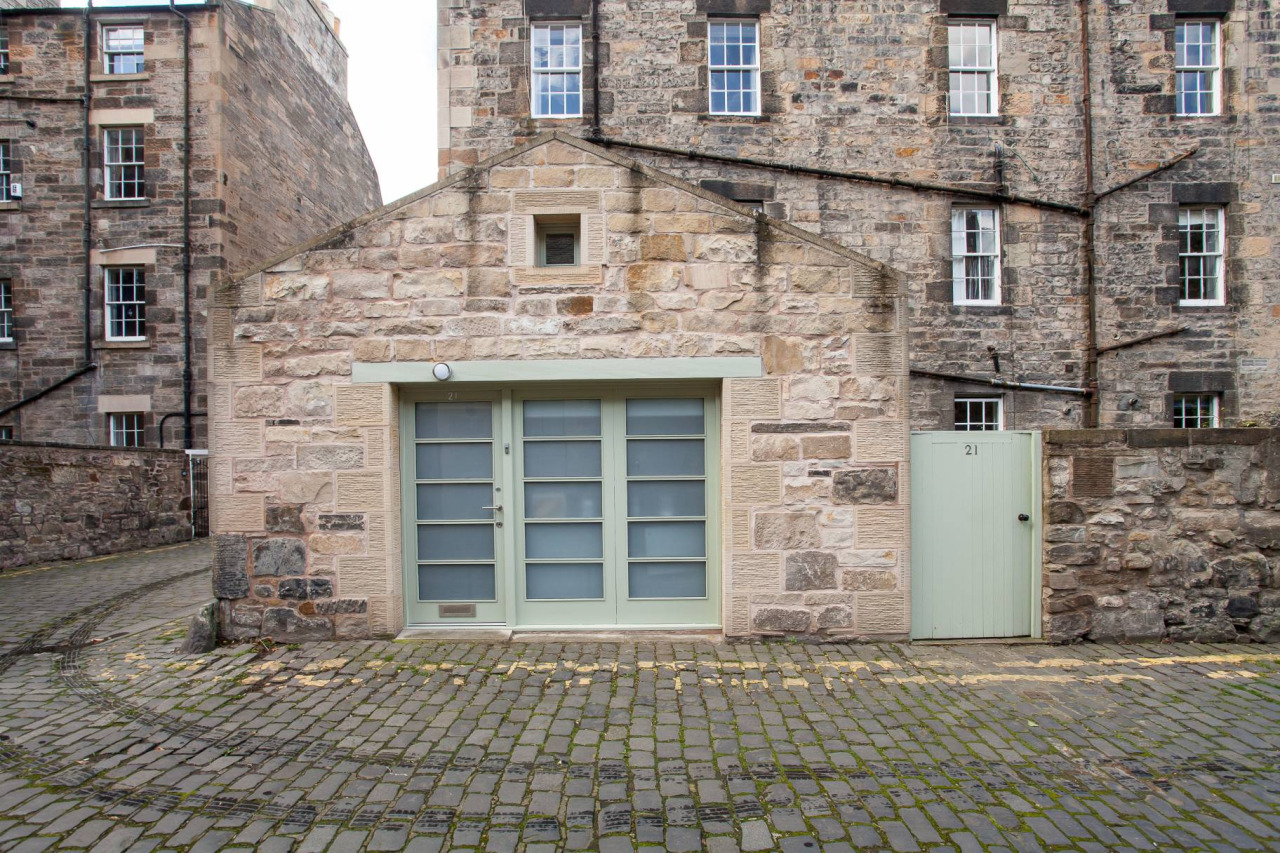