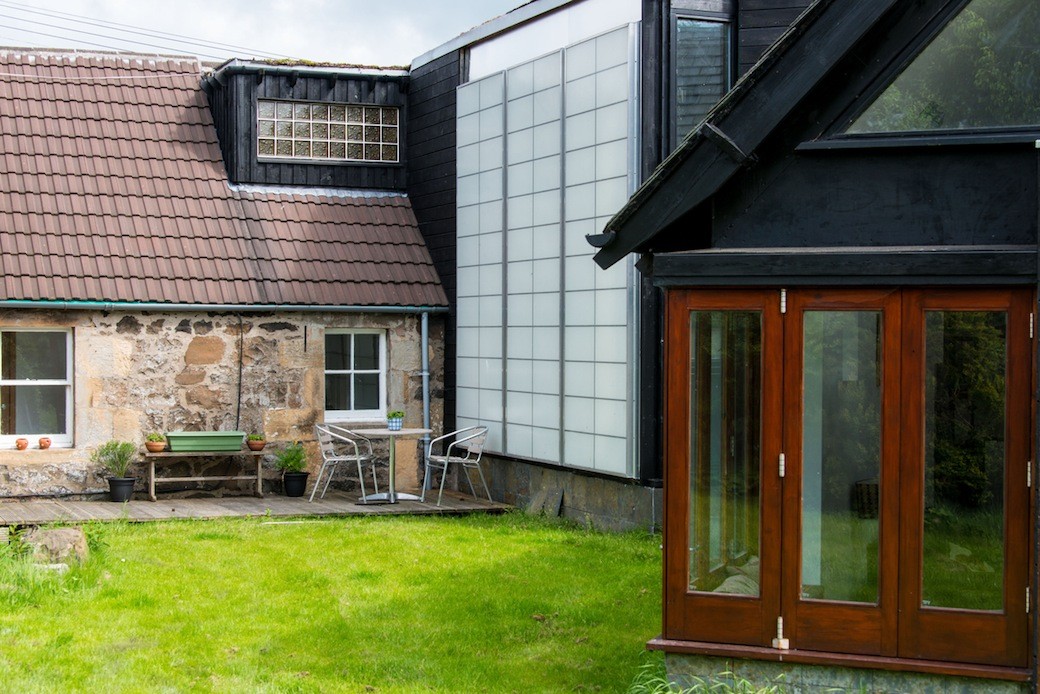 I don’t always post exterior images of the properties featured here as often, when I look at a post, it just flows better with a selection of great looking interiors. But some houses really can’t be explained by interiors alone. The Neuk is one of them. And that’s why I started this post with the exterior photos, showing this property from the street, where it looks cottagey and quaint, and then from the reverse, where the dramatic extension transforms a quaint cottage into a striking home. 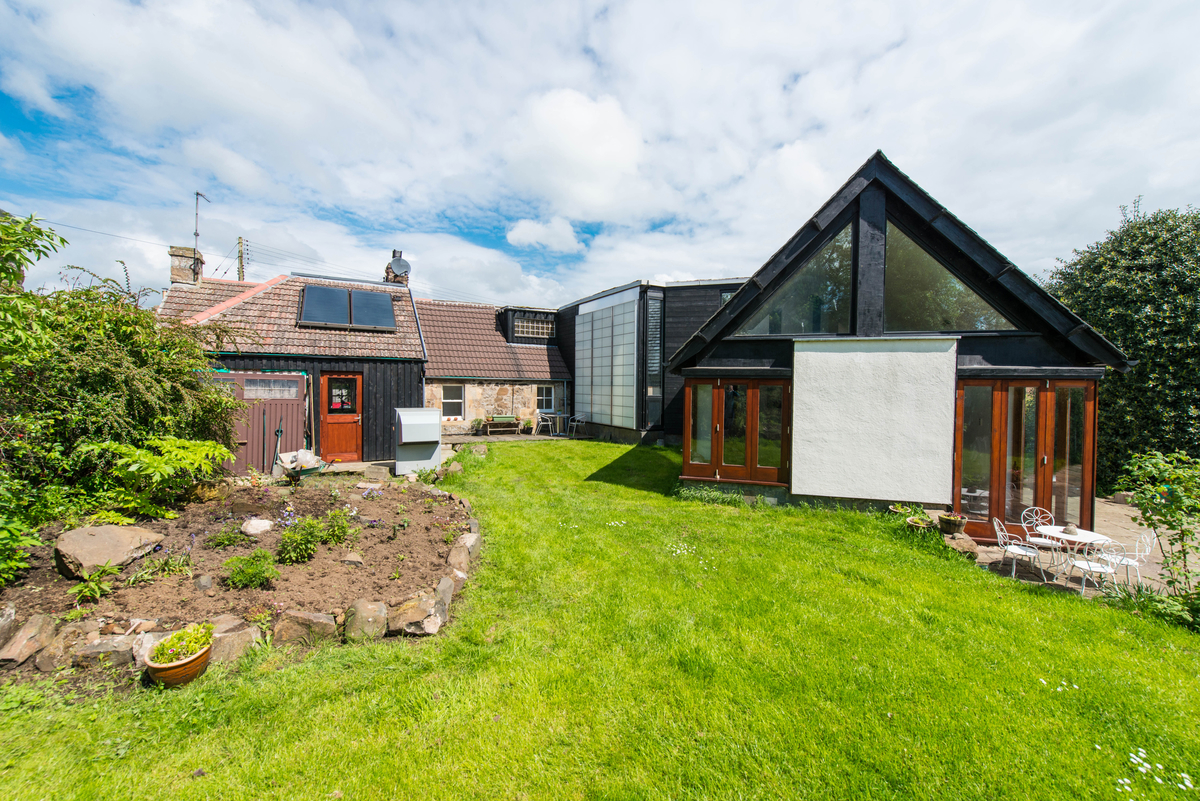 As an architect, David Dow of Lucas Dow Design Studios has always kept an eye open for projects that he could tackle for himself, and back in 2006 David and his wife Lucy were looking for a country home when they spotted The Neuk. Situated on Old Mill Road on the edge of the village of Craigrothie in Fife, just five minutes drive from Cupar and near St Andrews, The Neuk dates back to 1829 when it was built as three weavers’ cottages. 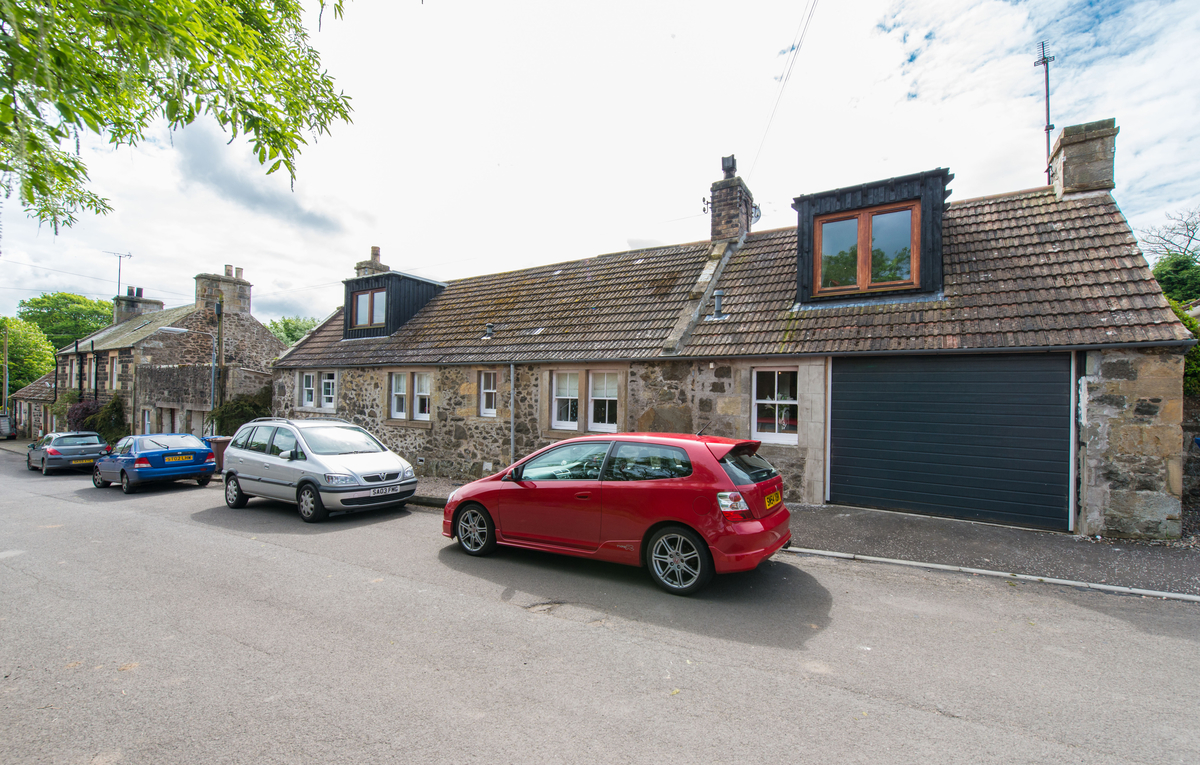 The cottages were combined at some point in the early 1900s to form one house, and various families had lived here over the years until a local businessman bought the property with the hope of gaining planning consent to build houses to the rear – as the property has a large garden including an orchard and an area of meadow. 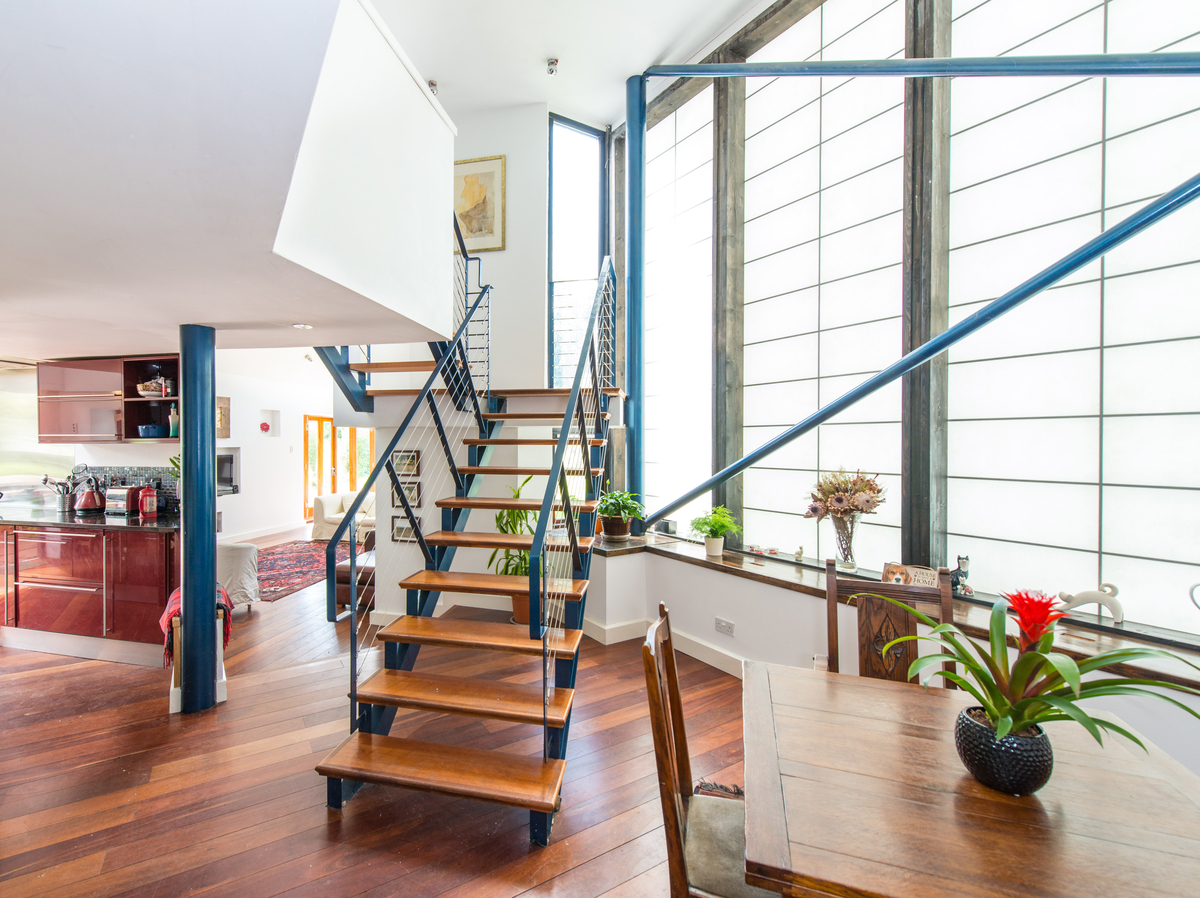 That planning application was denied, but the previous owner did gain planning consent to extend the house to the rear, which is when David and Lucy arrived with their family. “This house came up on the Friday, and by the end of that Friday night I knew what I was wanting to do,” David says, adding, “although how it resolved itself in the final detail took two years.”

David and Lucy bought the property in September 2006, and set about transforming the house by combining the existing cellular spaces – now bedrooms – with the dramatic extension that creates an open plan sitting room, kitchen and dining area. The dining area is double height and is bathed in natural light from the translucent ‘shoji’ wall, while a steel and timber staircase leads up from this area to the galleried landing above. 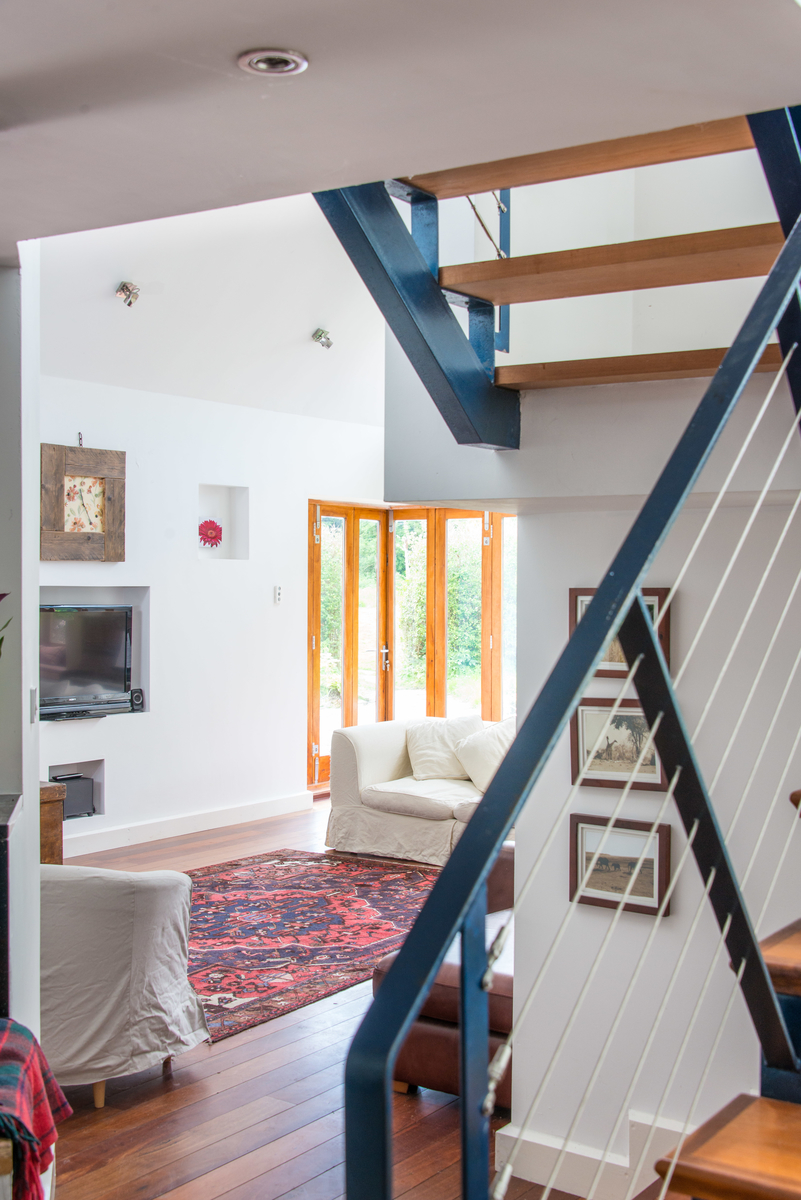 The sitting room also has a double height vaulted ceiling, and glazed corners open this space out into the garden. This sitting room sits at a 45 degree angle to the cottage, creating this “internal courtyard” as David says of the dining-hall, where the old and the new elements of the property meet. “It’s like an old Scottish manse idea, where you have the main reception hall with the accommodation off it,” he reflects. 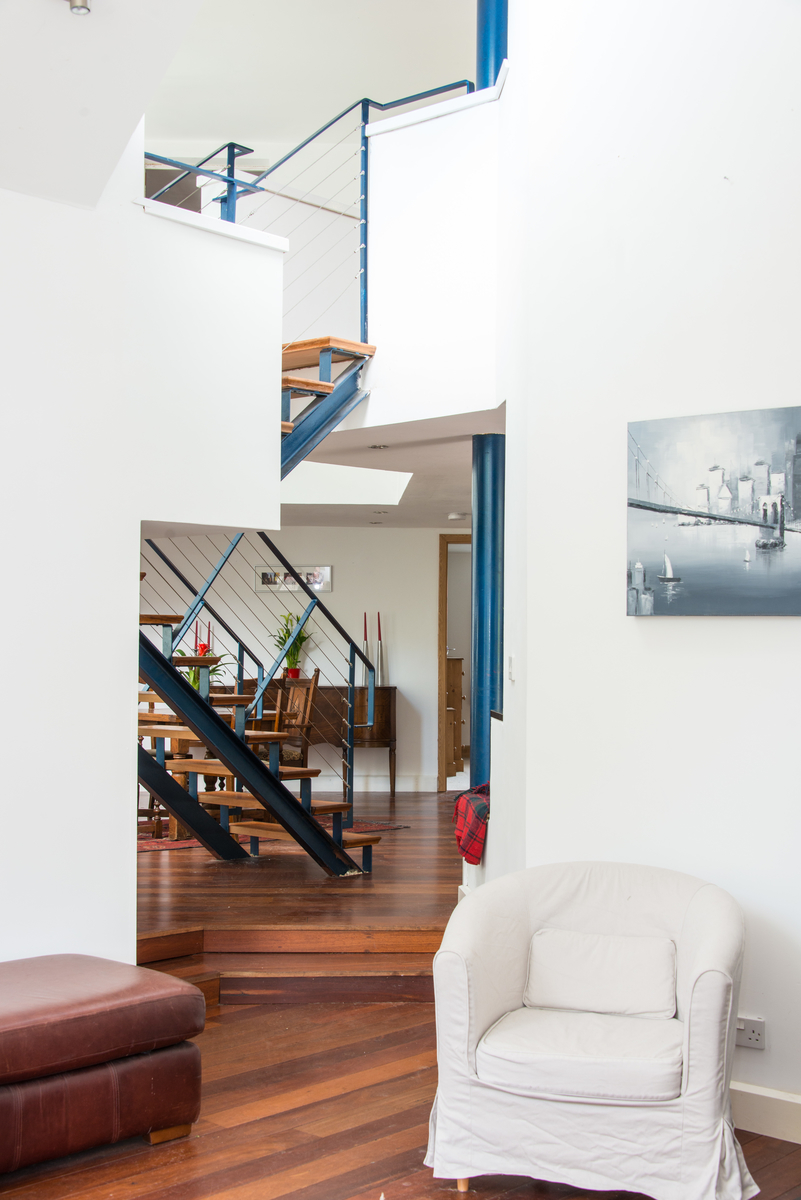 The existing stone property was stripped back to its shell and rebuilt internally, creating three bedrooms along with a bathroom and a shower room on the ground level. The galleried landing above the dining-hall leads to the master suite, which takes up the first floor level. “It’s essentially a steel-framed building, in-filled with geometry,” David says of the extension, describing the design process as being “like a game of sudoku with myself, where I could put things in place that I knew wouldn’t change. In my mind I knew what I wanted to do, and Lucy was happy to go with the flow on that, so I did get to explore architectural whims a wee bit.” 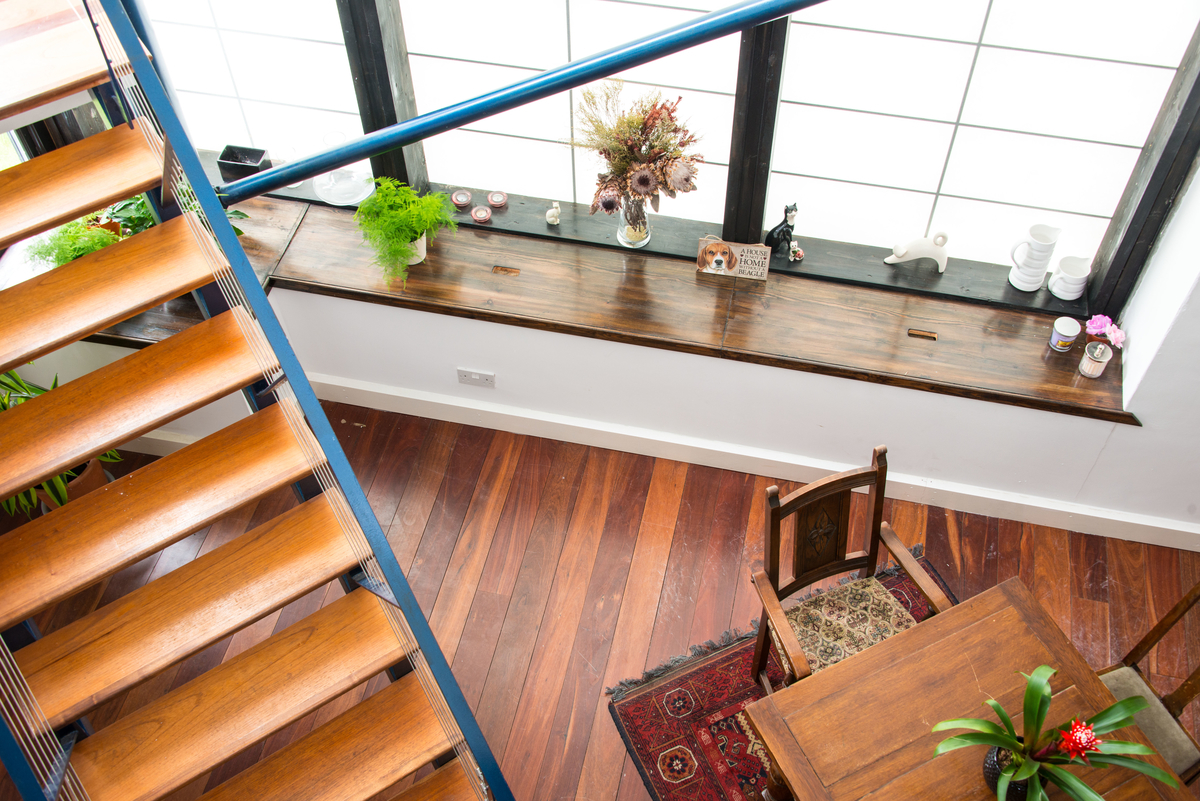 It took time to work out the detailing. “Because of the 45 degree splay, the way the staircase worked and the windows were going to be was always changing,” David says. “It changes as you’re interfacing with the builders and the materials themselves. There’s a ratio between time, cost, and quality, and our agenda was quality.” 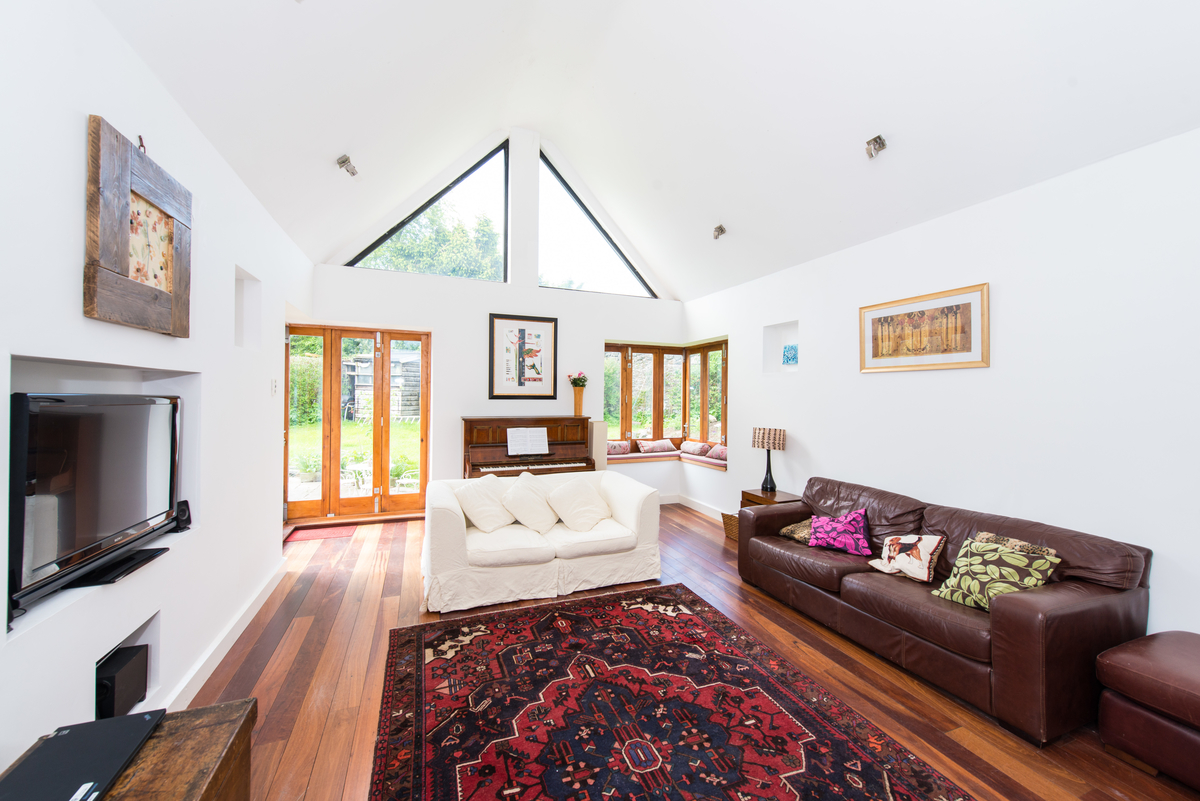 The house includes eco features: an air source heat pump was installed for the underfloor heating, and two solar panels provide hot water, while the south-facing site ensures passive solar gain. For me, the unexpected contrasts and the volume that David has achieved here have created a really exciting and vibrant living space. I love the long views between the different zones – indeed, between inside and out as the living space is so connected to the garden. This is perhaps the last thing you’d expect to find when pulling up outside this traditional stone cottage. 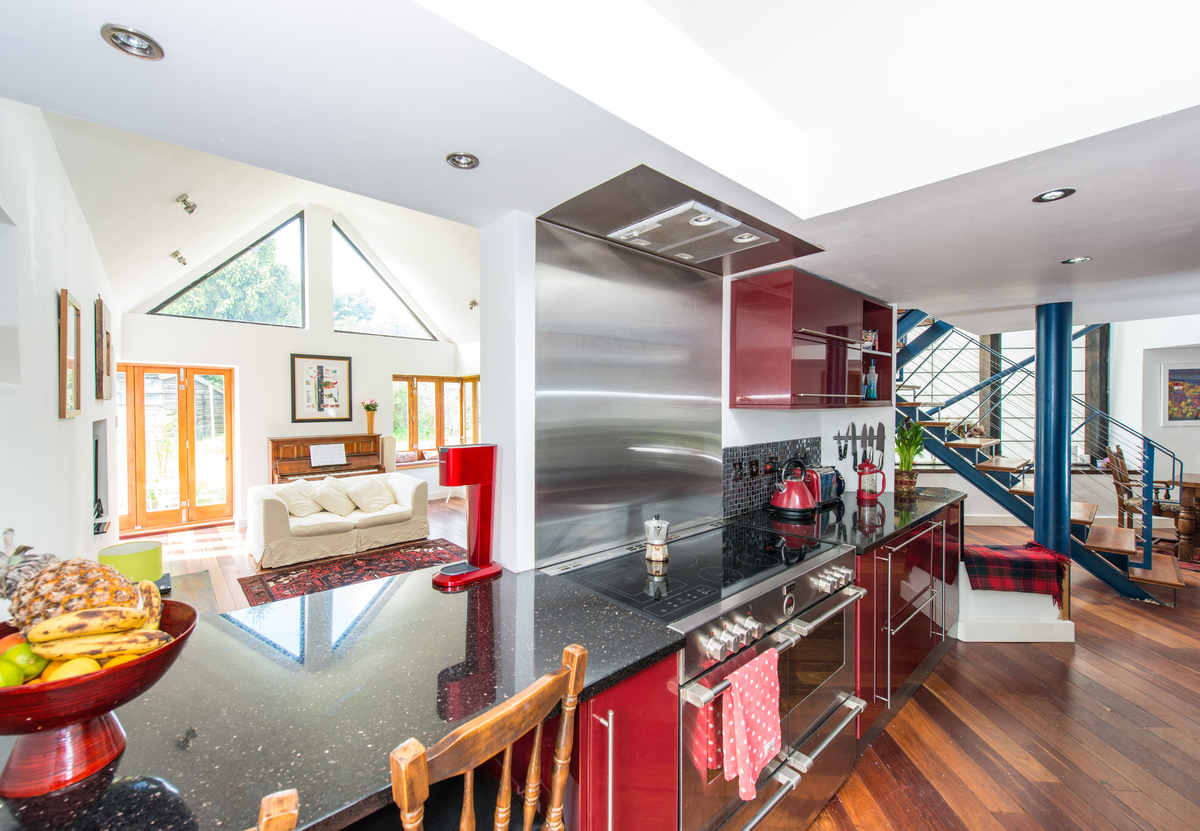 And the shoji wall was an inspired touch. “It was about allowing a lot of light into the space while providing privacy for our neighbour on the west side,” David explains. “I’d seen this product used in architectural projects, and it worked here in terms of the light and privacy but also the aesthetic. The trick was to have elements doing lots of things, aesthetically, practically and functionally. We wanted to do something that we would really enjoy, and that had that mark of design quality.” 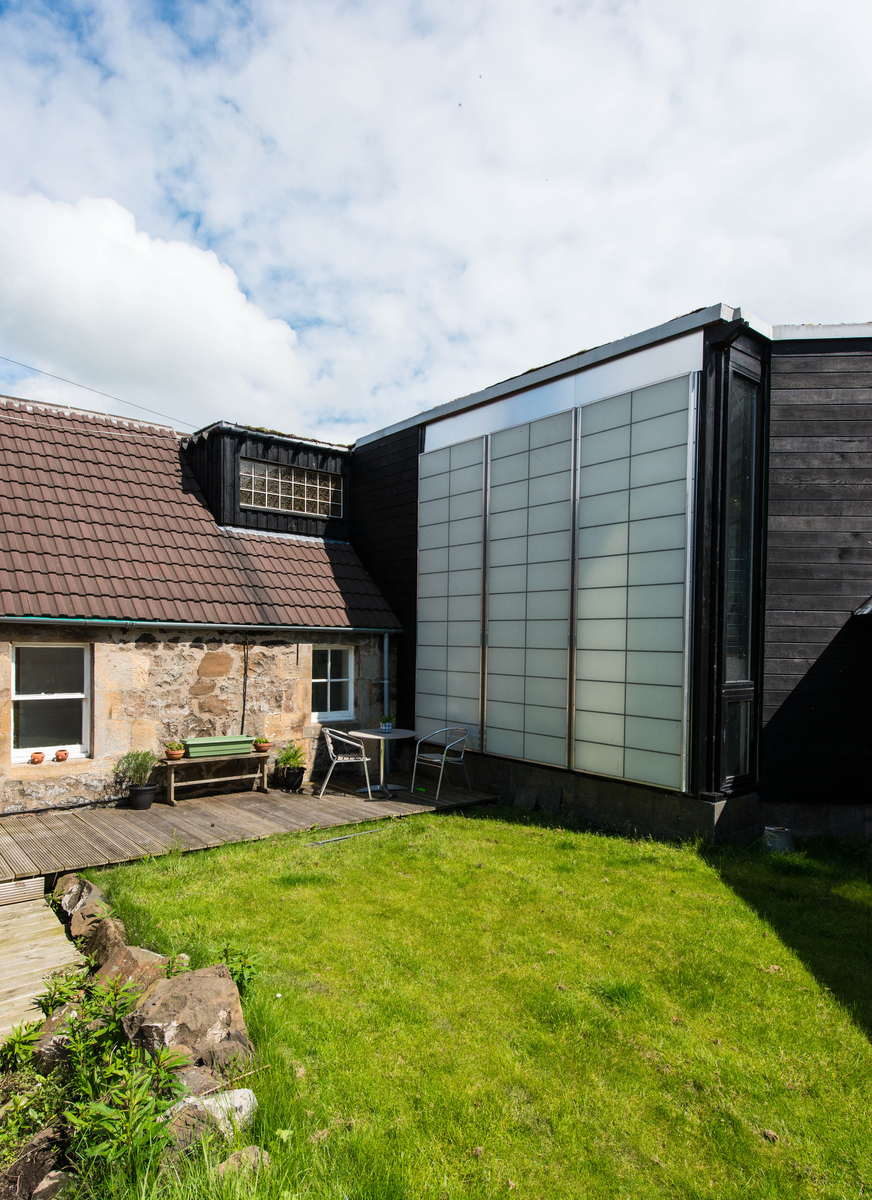 The Neuk was marketed by CKD Galbraith.