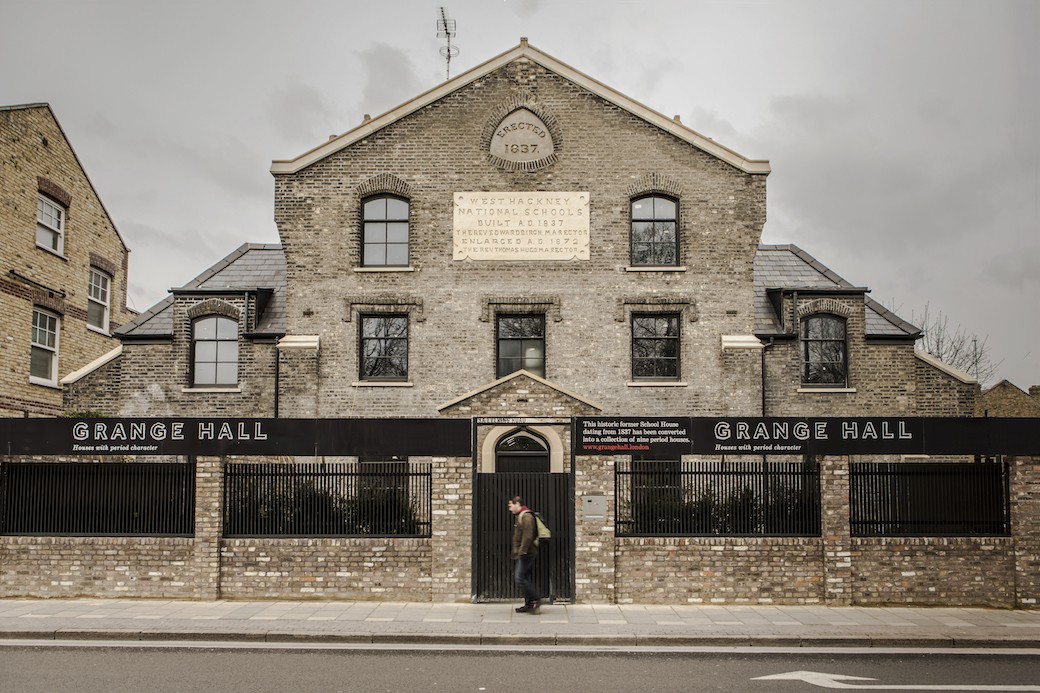 Grange Hall is one of those buildings that I wouldn’t be able to walk past without pausing to take a photo – there’s just something about this façade with its weathered, rustic-looking brickwork that I can’t resist. The original West Hackney Parochial School in Stoke Newington in London’s N16 was built in 1857 as two large halls that housed the girls’ wing to the west and the boys’ wing to the east. The building was later used as a church hall, a social hall and a snooker hall, and more recently its name was changed to Grange Hall and it was used as a warehouse for electrical fittings and rare transistors. 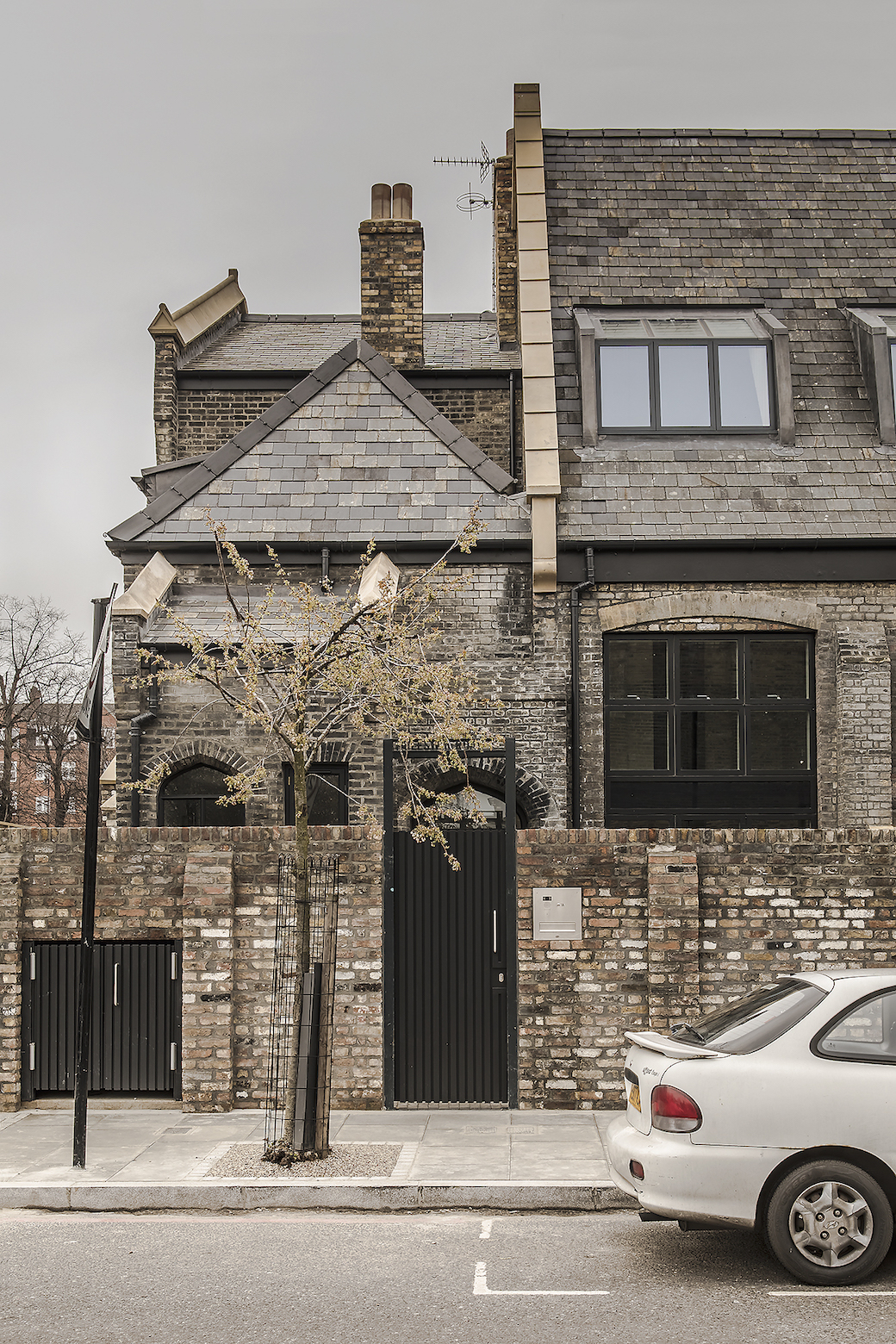 This building’s latest incarnation sees Grange Hall developed into nine houses, including this three bedroom property, The Folly, which is being marketed by Aucoot. The development is the work of the architects Nissen Richards Studio who have transformed the property to form spacious and contemporary living spaces while retaining the building’s many original features – indeed the development is currently shortlisted for an AJ Retrofit Award. The interior of The Folly has been created by the interior designer Adam Bray, who has selected pieces that complement this property’s industrial-meets-loft living vibe with an aesthetic that’s both eclectic and elegant. 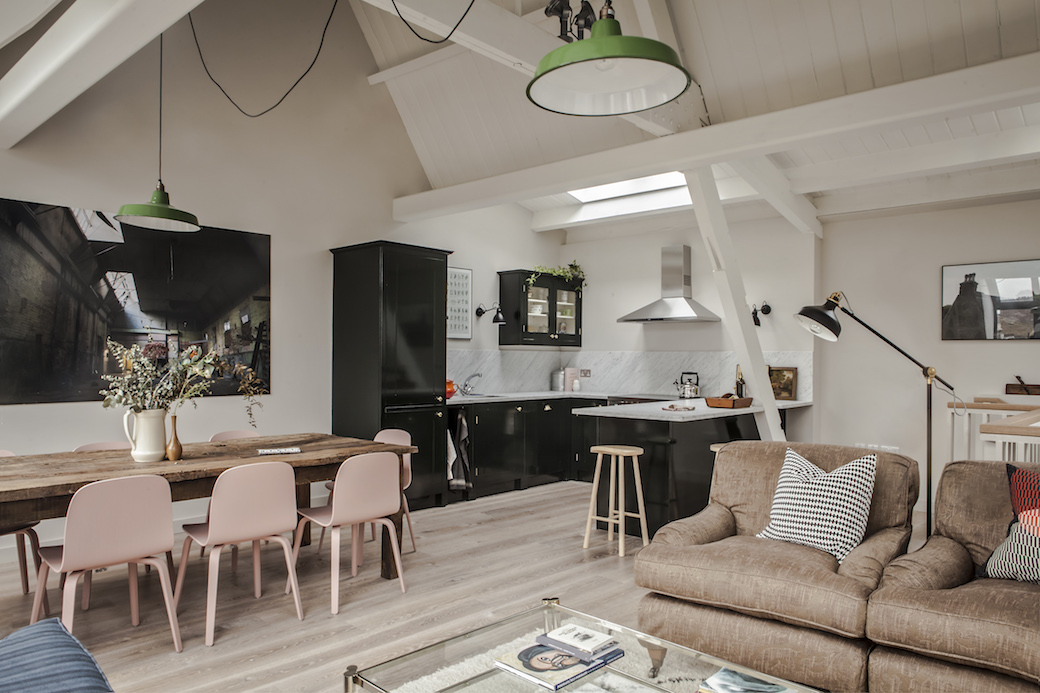 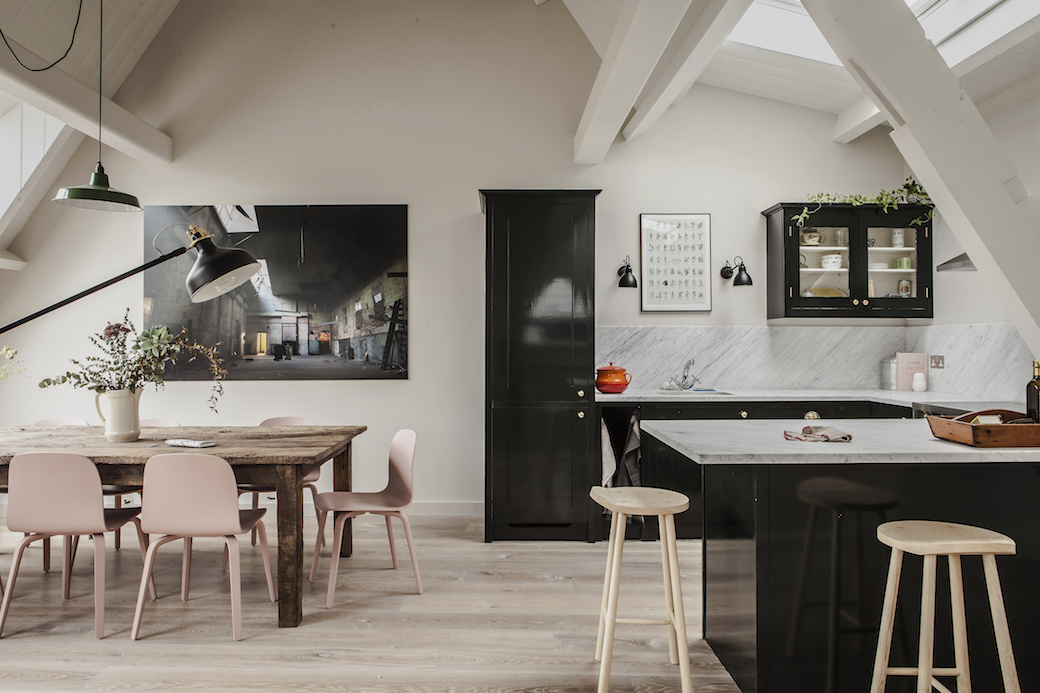 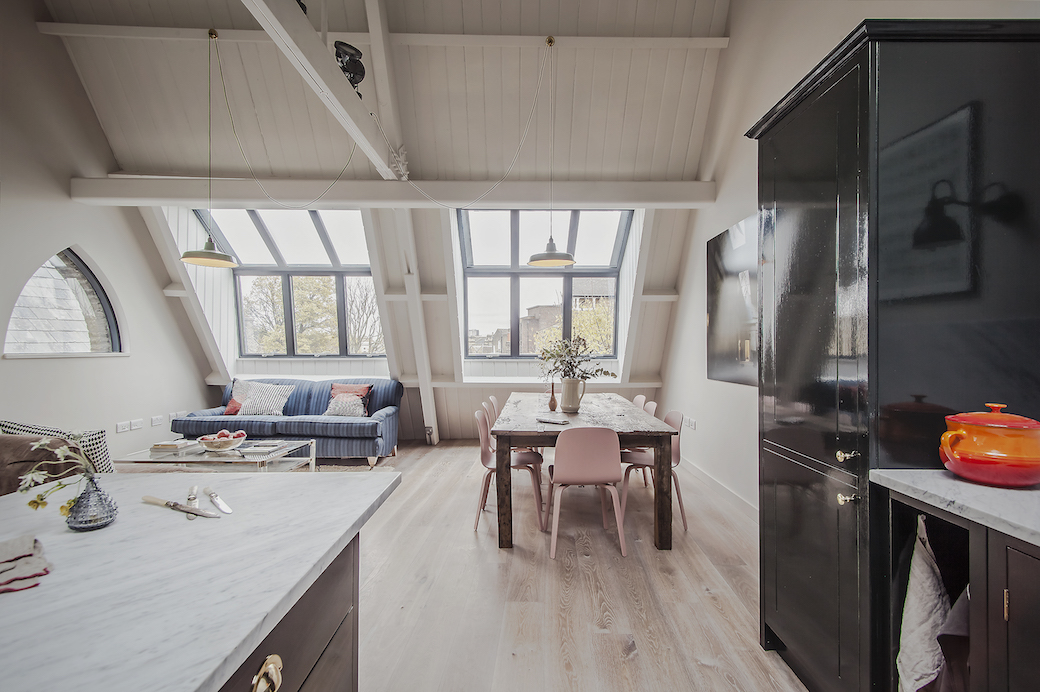 For me, this living, dining and kitchen space with its giant windows and lofty ceiling is enough to sell The Folly, but also look at the details. I’m a fan of the British Standard range of kitchen cabinets by Plain English as I love that ethos of traditionally made, well crafted pieces that have been designed to last a lifetime, plus their aesthetic is 100% what I love. I may write about and admire lots of super-contemporary and streamlined kitchens but I’m a traditional gal at heart. Show me some Shaker-style cabinetry with a Belfast sink and a vintage-style brass tap and subway tiles and I’m sold.

So, needless to say perhaps, but I’m liking this handmade British Standard kitchen, which was made in Suffolk and painted on site with Little Greene’s Obsidian Green – a dramatic off-black hue that’s offset here with the 30mm thick Carrara marble worktops and splashback. 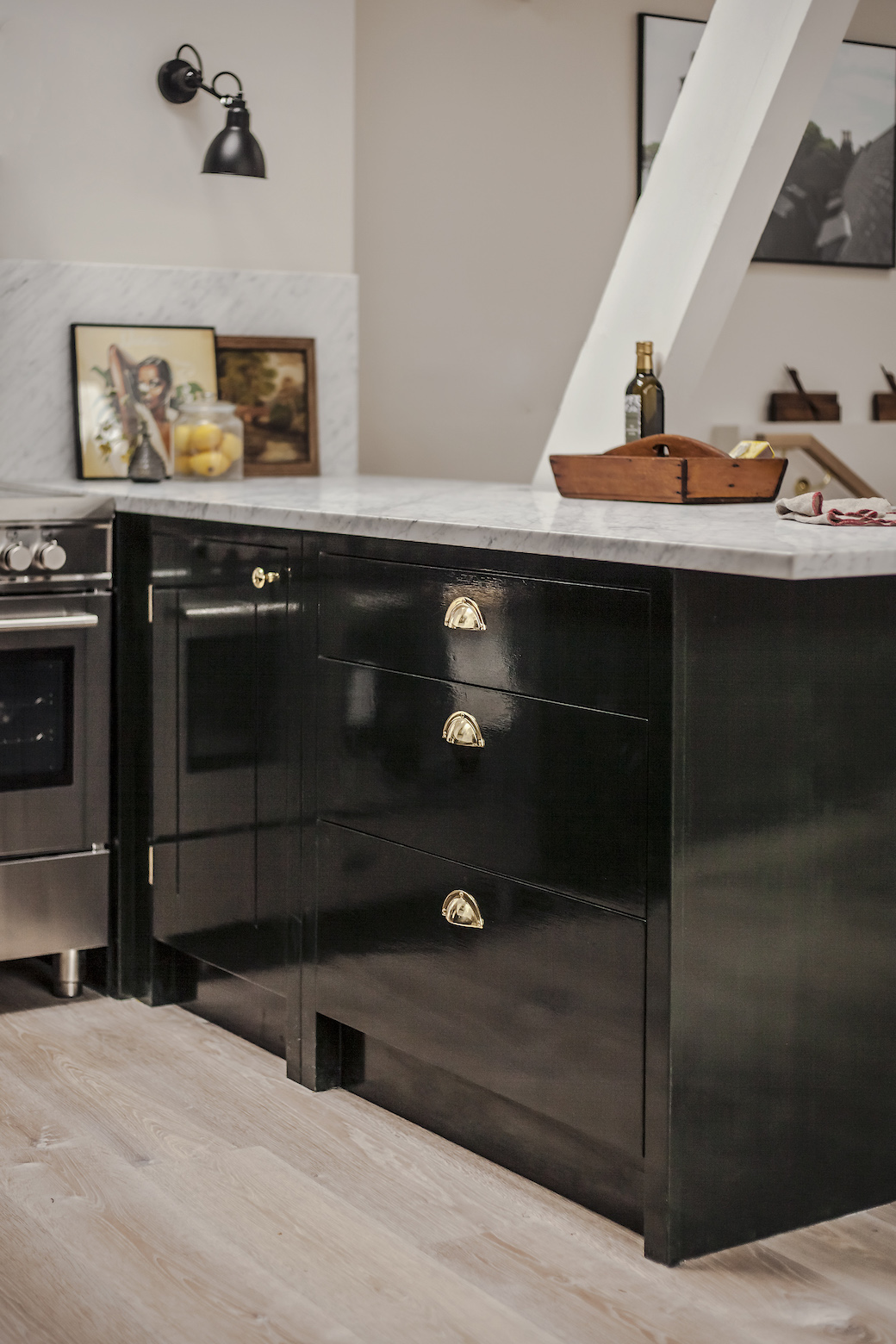 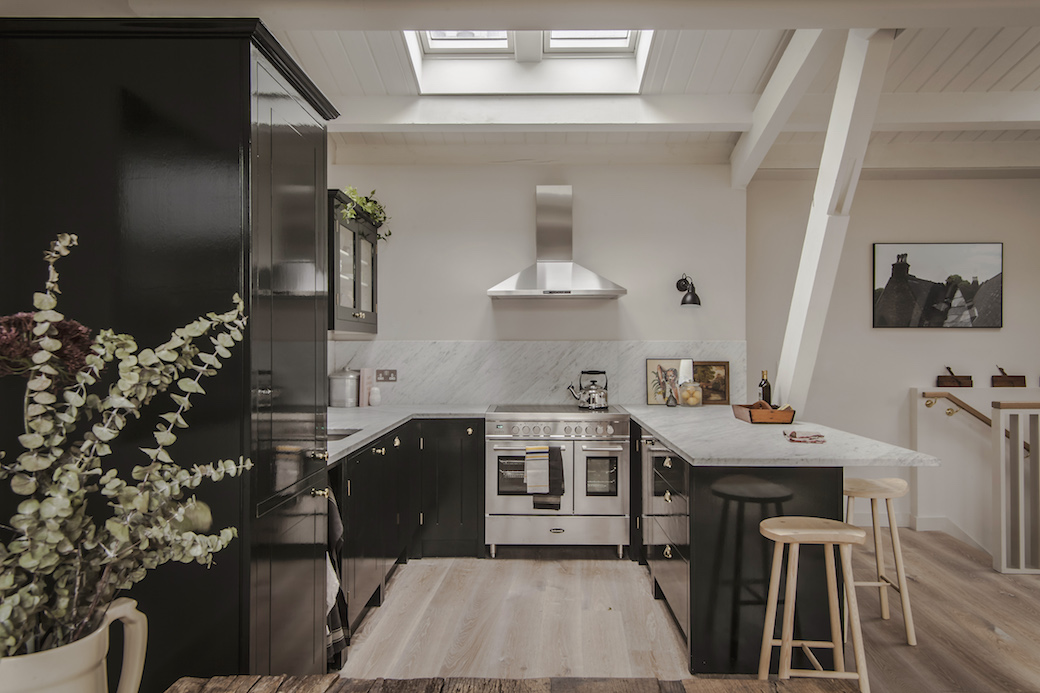 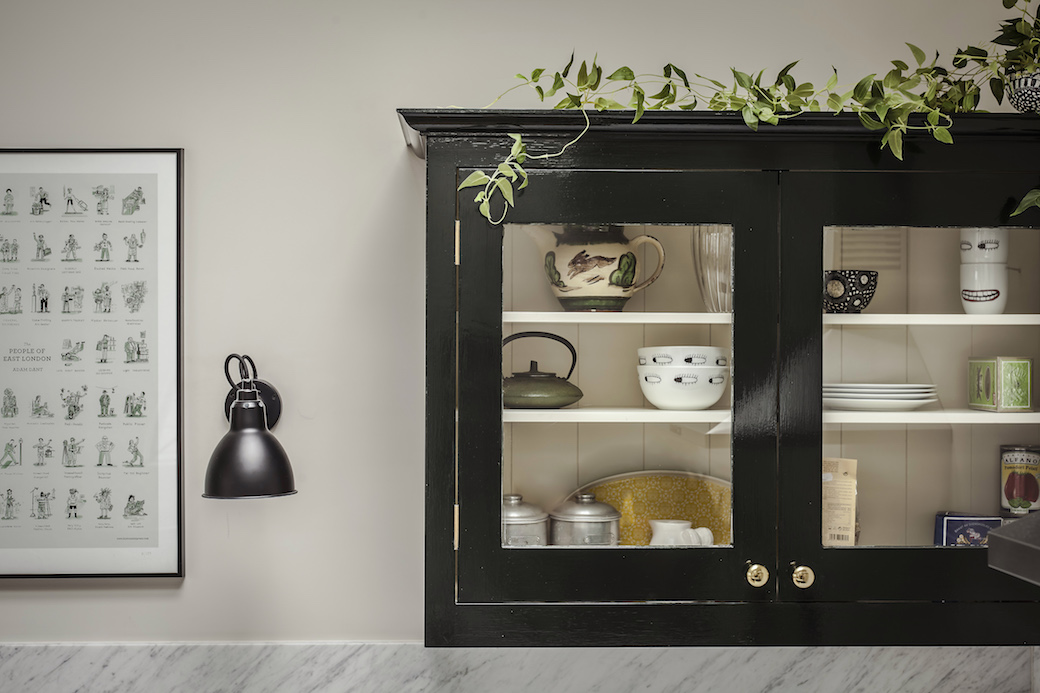 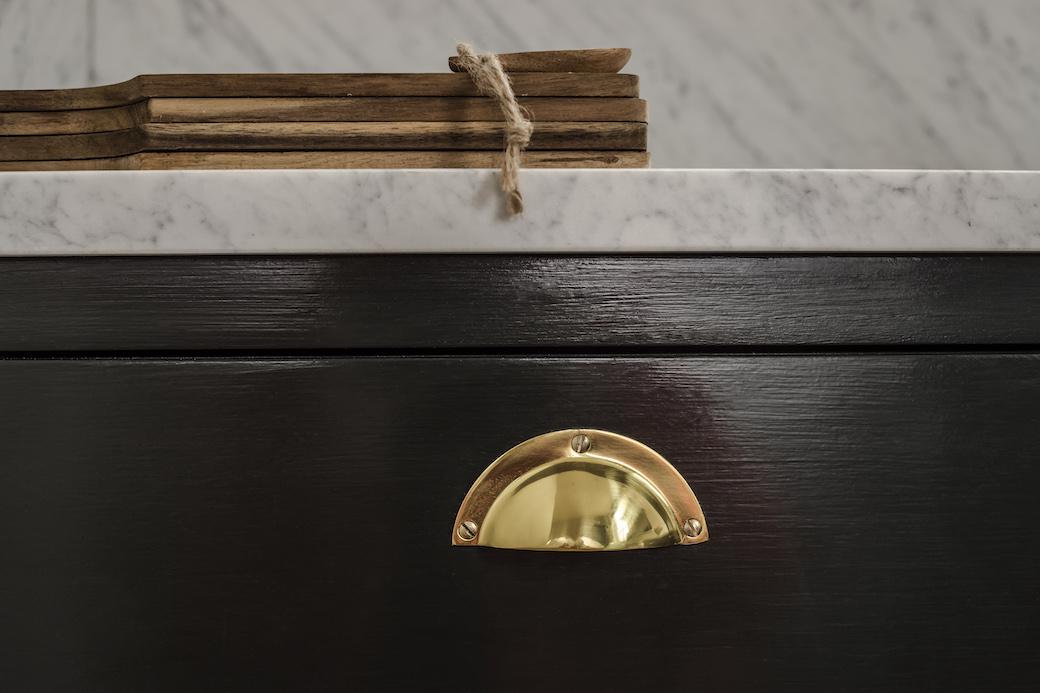 While the space is dramatic in its volume, I like that it still feels ‘quiet’ with its pale wide plank floorboards of lightly smoked and waxed engineered oak, and its chalky palette, and Bray has complemented this with rustic elements like the timber dining table and the vintage style lighting. Yet this is also a technologically advanced home as the electric underfloor heating is controlled using the latest neoStat-e thermostats by Heatmiser, which incorporate self-learning preheat features so that the spaces are warmed in time for your arrival home – and you can operate the heating from an app on your smartphone. 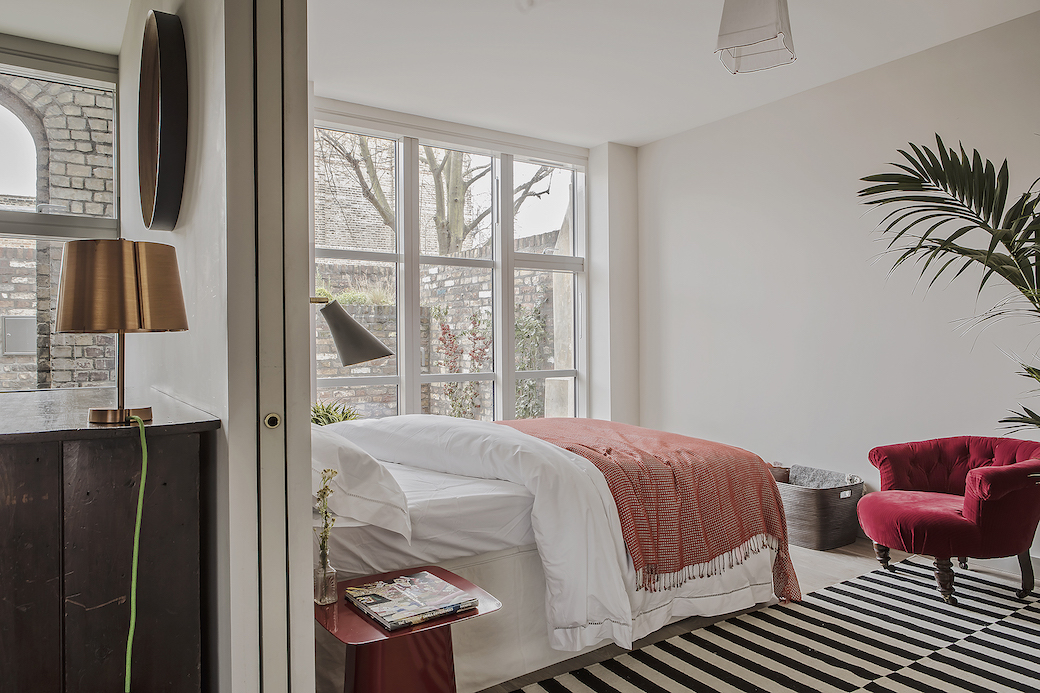 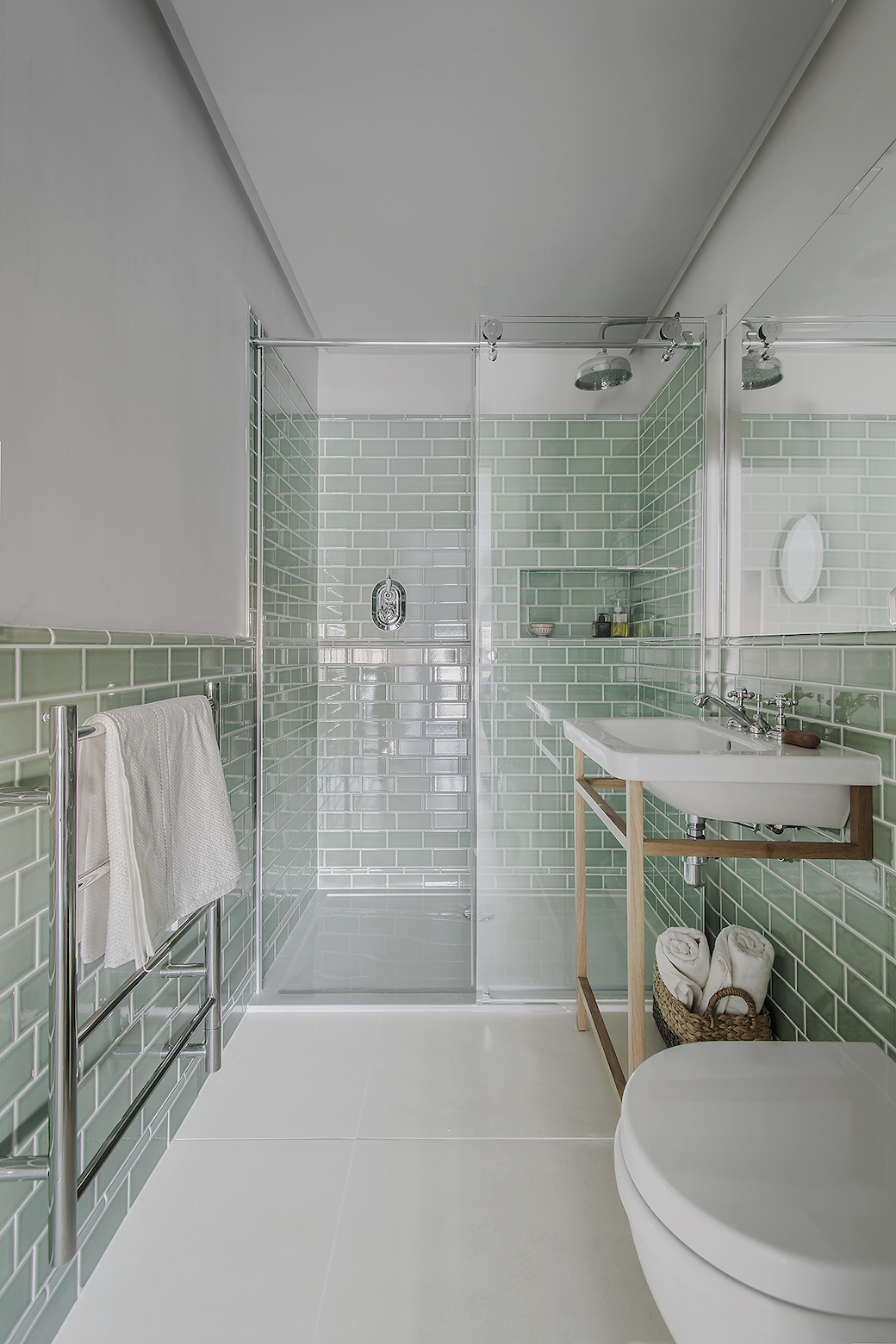 There are two bedrooms and a family bathroom on the middle floor, while the main bedroom (above) is on the ground level with a walk-in dressing room and ensuite. The bathroom fittings are from Aston Matthews – I particularly like the basins mounted on their slender timber stands – with crackle glazed tiling from Fired Earth. 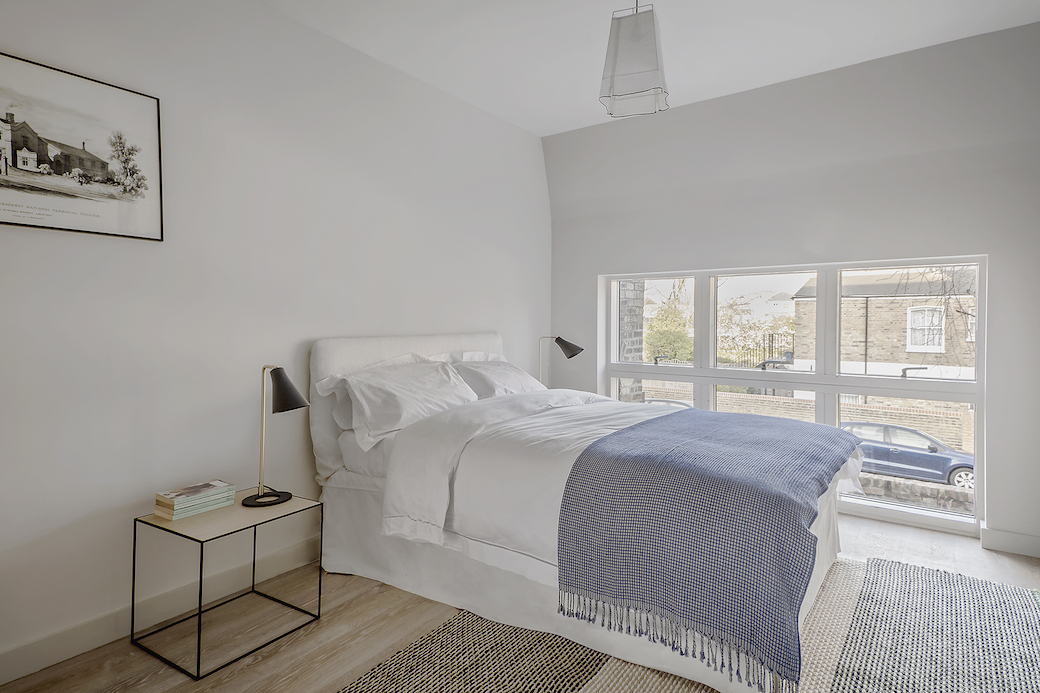 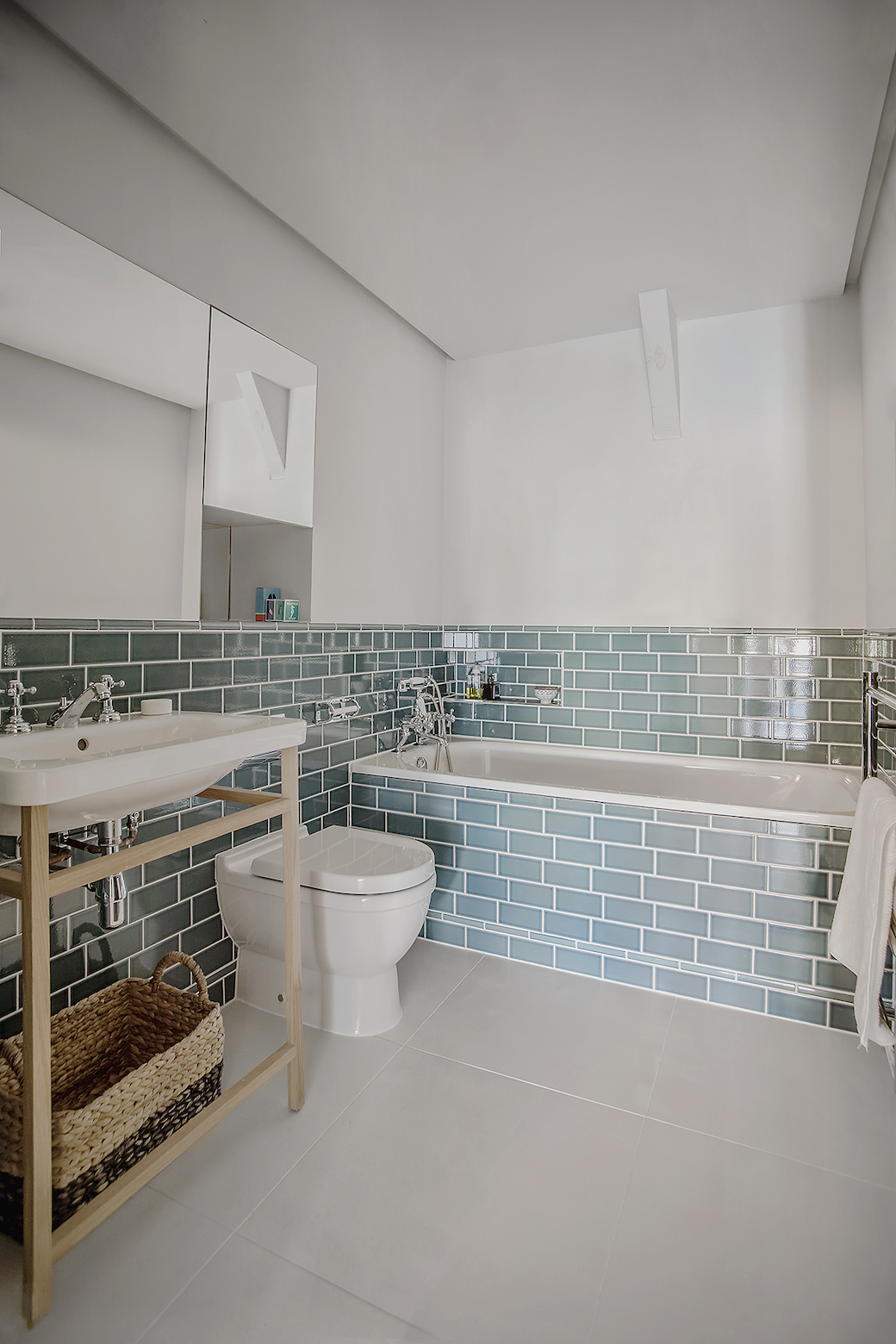 The wide hallway leads out into a landscaped private courtyard that references English walled gardens in its design, and here the school’s original arched vestibule has been converted into a unique open air folly. I’m drawn to the character of this apartment – and as well as The Folly, Aucoot is also marketing The Grange, which is the largest property in the development with four bedrooms and an expansive ground floor living space. 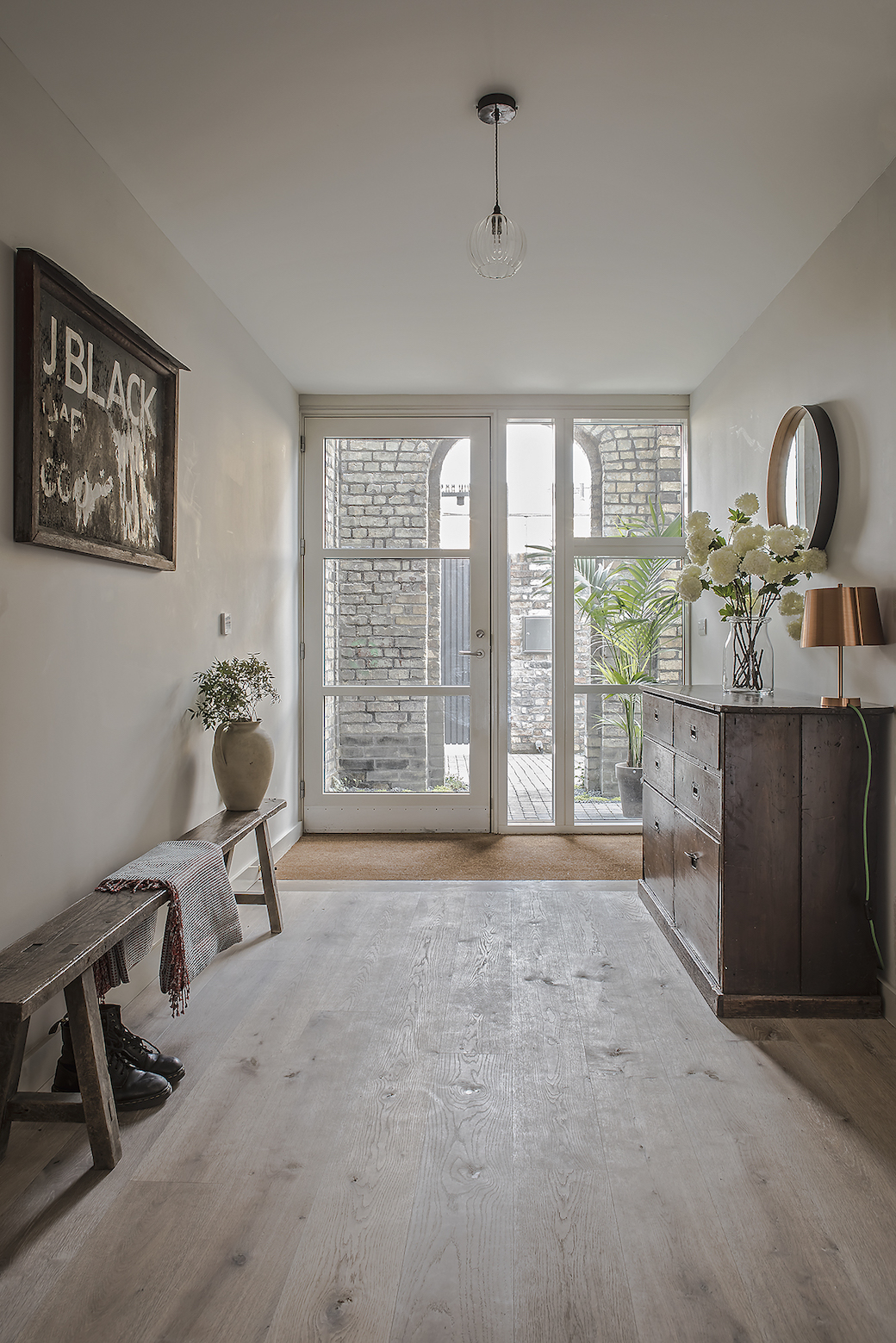 See The Folly on Aucoot.

All photography from Aucoot.