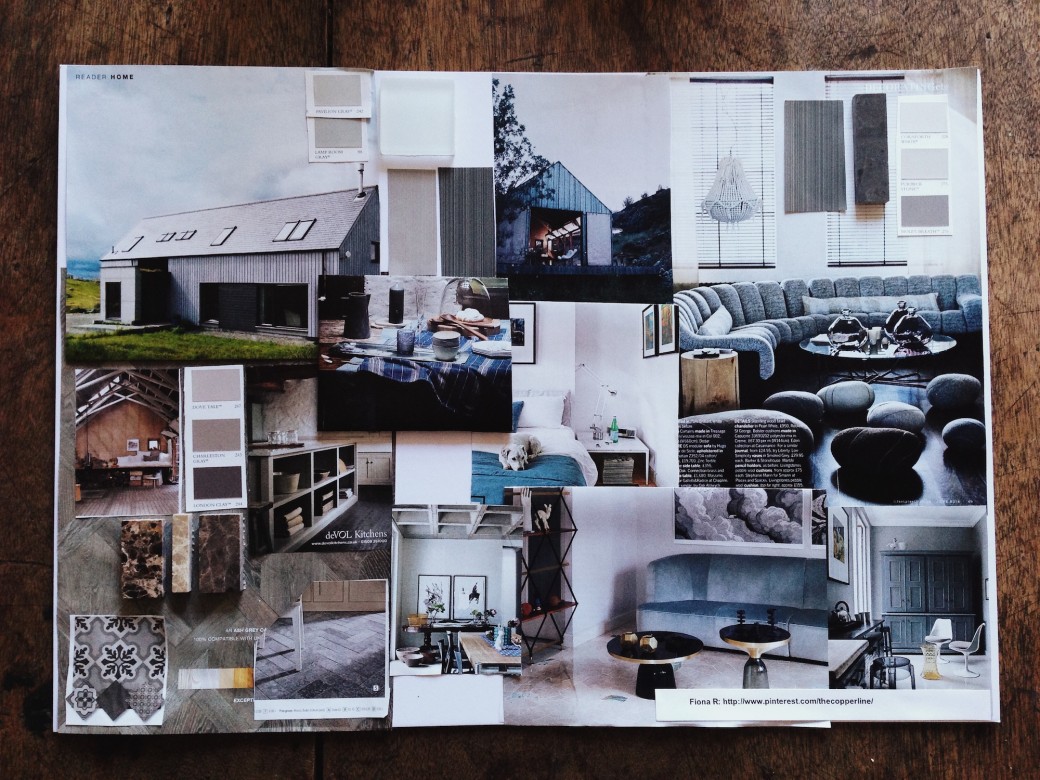 And, while I don’t remember when this all started exactly, I know it started with Pinterest. I had no idea what I was letting myself in for here; no idea how addictive it would become, and how enjoyable. I’ve never been one for creating moodboards, or cutting things out of magazines to keep. I understand why people do this, but my magazine collection is something sacred. You could flick through my back collection of Elle Decoration or Livingetc or Inside Out and you wouldn’t find a page missing, or a space on a page where something had been removed. I repeat, the scissors do not go near the magazines.

And I reckon this is perhaps why I became so hooked on Pinterest. I didn’t have to cut anything up to collate ideas; the ‘cuttings’ were all on my boards, on my iPhone. And, stating the obvious probably, but I’ve noticed a real shift when interviewing people about their homes over the last few years. When I ask the question about where people get their inspiration for their interiors, a few years ago most people referred to their collection of magazine cuttings. Now, everyone cites Pinterest.

So, you can imagine how excited I was to receive an invitation to the very first Pinbassador event in the UK, which was held at South Block in Glasgow’s Merchant City earlier this week. An evening with Pinterest? Are you kidding me? Sign me up! The event was held by the first Pinterest Ambassador Hege Morris, who you might already know from her blog Hege in France. It was a meeting of fellow pinners, where Hege gave an informal and informative talk about using Pinterest, with tips on how to get the most from your pins and engage more widely, and then – and then – we all set to work creating our own mood boards.

This is the point where I must confess feeling a wee twinge of anxiety. I’ve never created a mood board in my life. I’m in a room filled with creative types and fellow bloggers. There are people in this room who could throw together a mood board in their sleep and it would look fantastic. I’m a journalist; this is not what I do. Plus, this required me to slice a pair of scissors into a copy of Livingetc. Did anyone say cold sweat?

But you know what, it was fun. (No really!) Is the end result cohesive? Well, I’m not sure. It began with a bit of grey glamour (on the right) and evolved into modern rustic (on the left) after I came across a photo taken by Susan Burnell of a house on North Uist featured in House Beautiful. And I got to catch up with Alison Gibb of Her Indoors and Solii Brodie of Be Fab Be Creative – and I must thank them both for making the experience even more enjoyable as there’s nothing like spotting a familiar face or two when you walk in to a room full of strangers. And there was a goodie bag that Hege had put together including gifts from Bodie and Fou, Ferm Living, Farrow & Ball, B&Q, and Bloomingville. Just saying – this was a cool touch.

Since the event, I’ve been mulling on the question, how has Pinterest changed the way I do things? Now, if someone was to ask me to create a mood board for whatever reason, I’d create one in Pinterest and pin images to it from my other boards, and from other content elsewhere. I’d mix in fashion, colours of nature, random images that together create a mood – things I didn’t do on the board above. Because for all that I love pinning interior and architectural images – which is why I joined Pinterest in the first place – the boards I really love are the ones that I didn’t start out with: landscapes, black and white photos, portraits, dogs, vintage, graphics and type, animals, pattern, illustration, cute guys (and girls) – you get the picture, literally. All the things I didn’t expect to be pinning. Pinterest has turned an interiors junkie into an image junkie. That’s it.

So I reckon my Pinterest boards will be evolving as I add some mood boards in to the mix. I feel for my Other Half. He points out that we used to sit on the sofa late at night, talking. Now, I’m there with my iPhone. That’s a bit tragic, I know, but I’m sure I’m not alone in this.

So, if you hear of a Pinbassador event happening, go check it out. Hege has blogged about Wednesday night’s event here. Pinning may be a solo experience, but it’s always great to discover a like-minded community.