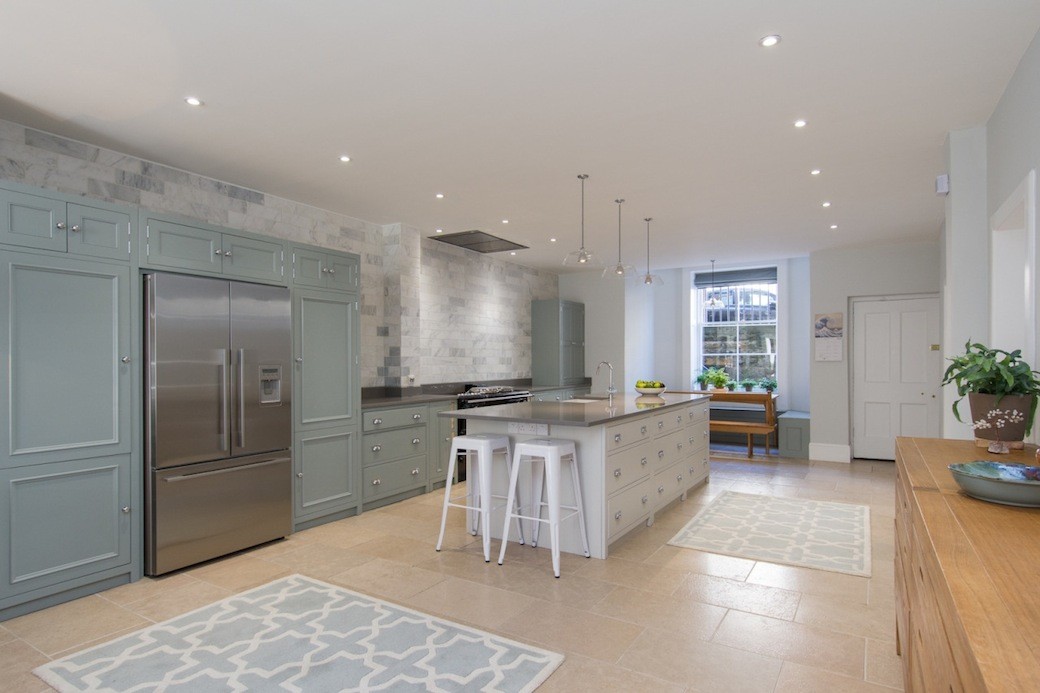 Some posts really do require restraint. I could easily have posted twenty more images of this incredible townhouse in Edinburgh’s West End, which is now on the market with Strutt & Parker. (See my Steller story if, like me, you can’t resist more images.) Indeed, I could have written two posts: one devoted to the fantastic open plan kitchen, dining and living space that inhabits the garden level of this four-floor property, and a second about the rest of the house, which is just as impressive, from the interconnected formal drawing and dining rooms that stretch the depth of the house on the ground floor to the vast, and I mean vast master suite that takes up the entire first floor. (Yes, the entire first floor. It’s stunning.) 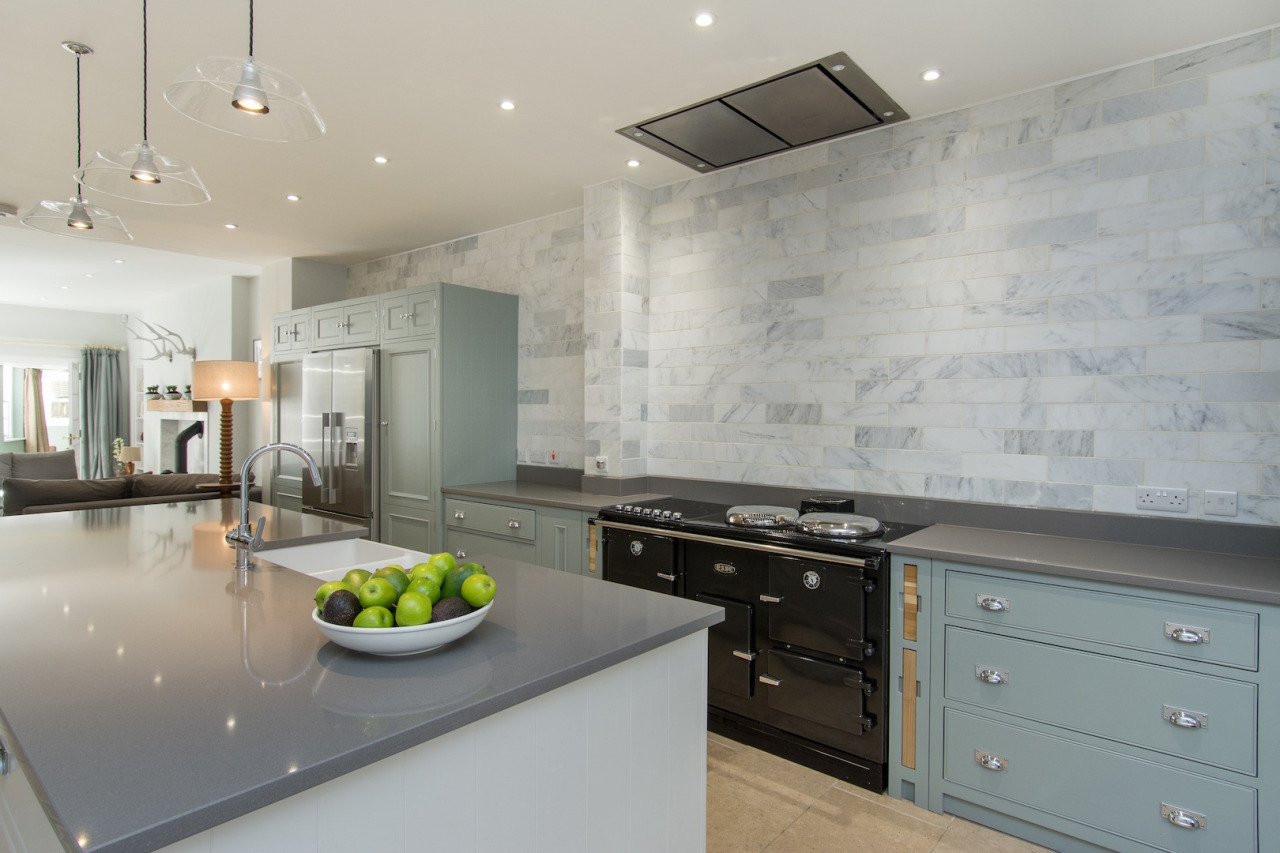 But I’m going to rein myself in here and focus on the garden level which, for me anyway, is the highlight of this beautiful home. I’ve said it before: a great looking kitchen can sell a house, but it’s not just about the kitchen here; it’s about the way this entire floor level has been transformed into a multi-tasking space. You could live down here quite happily, whether perched on the Tolix stools by that giant kitchen island chatting or having a slow dinner with friends at the dining nook set into the window, or lounging on the sofas by the woodburning stove. This space is about relaxed family living and comfort.

When owners Katie and John Donnelly first viewed this property on Palmerston Place two years ago, which was marketed by Strutt & Parker, it couldn’t have looked more different. In fact, the same is true of this entire area. Now, arriving outside, you’re likely to spot a tram gliding by at the bottom of the street – you could pretty much fall out the front door of this house and onto a tram – whereas in 2012 this part of the West End was a tramworks building site. 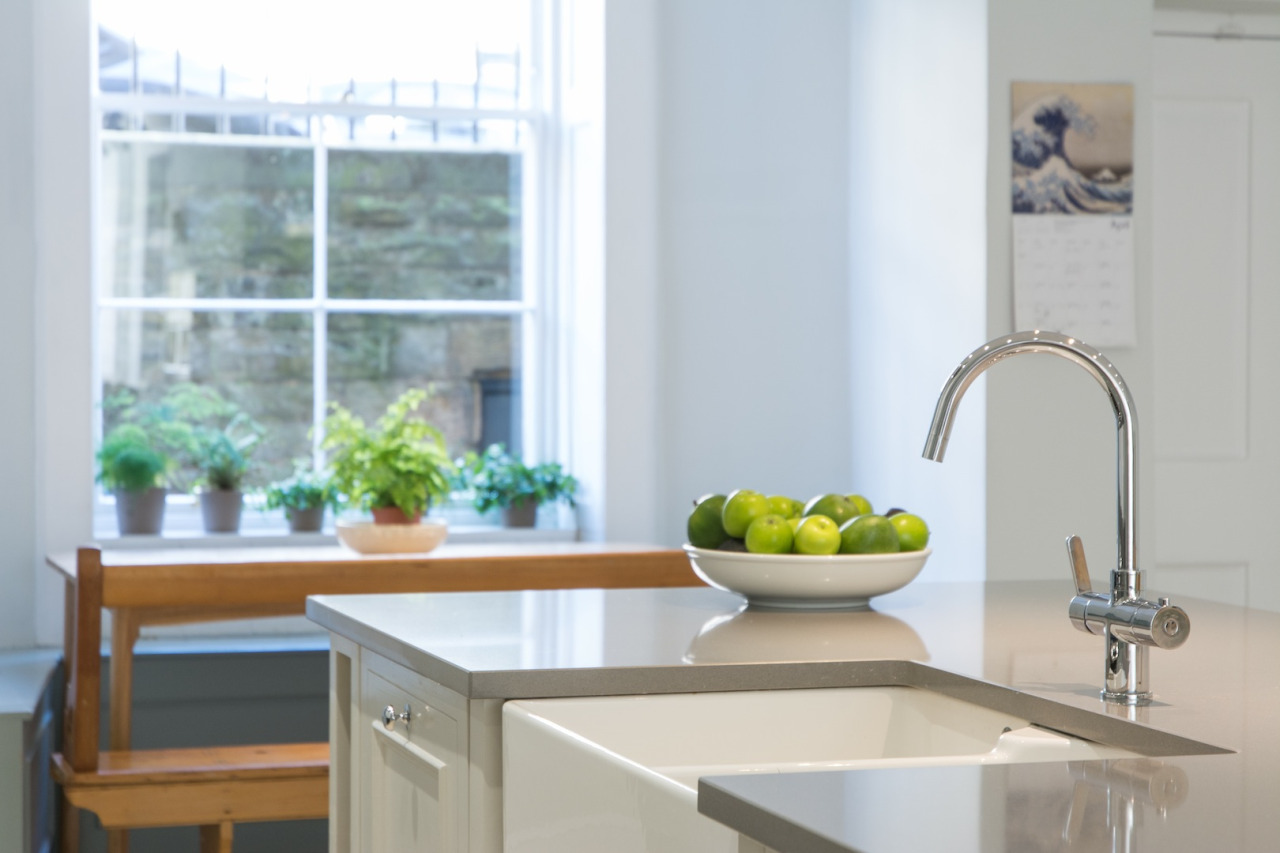 This townhouse at number 6 was a commercial property at the time. The building had gone through various uses over the years before eventually being bought by the Chartered Institute of Housing. “We hadn’t considered a commercial property,” Katie admits, “but we couldn’t find anything that was quite right for us, and when we came to see this we fell in love with it immediately. The house just had a nice feel about it.”

Having never tackled any type of project previously, the couple embarked on a year-long refurbishment and redesign of the townhouse while juggling work and family – they have two young sons, Struan and Gethin. “The previous owners had taken good care of the building, but we knew we’d have to do everything,” Katie says. “Whereas with other houses you’re never quite sure where to draw the line, here we had carte blanche; the house was hiding no secrets. 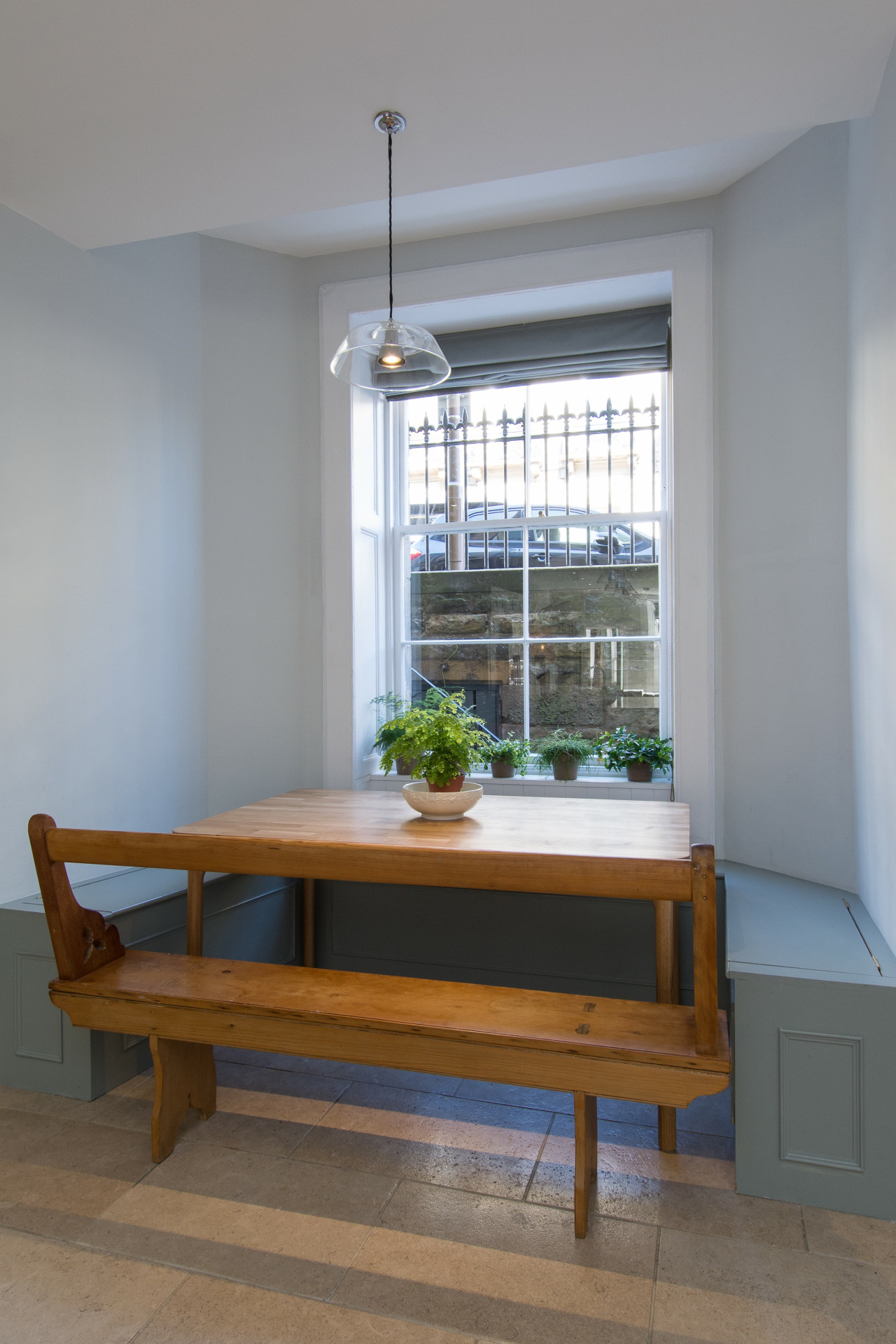 “The principal structural changes had already been made to the building in the 1950s and ’60s, so we were in the rare position of having a townhouse that had already been made suitable for open plan family living. The only structural change we made was to take down the wall between the kitchen and the seating area, but that could easily be reinstated if someone else wanted to.

“The challenge for us, because it’s a conversion, was that we were held to the newest of building standards but within a Victorian townhouse. We were fortunate in that we had a very good building officer who walked us through the process, and a very good architect, Aidan Ruthven, who was able to balance our needs with those of the contractor. He was the ultimate diplomat.”

John rolled his sleeves up and stripped out the building at the very outset. Indeed, he stripped all the old vinyl wallpaper – remember, this house stretches over four floors – in one night. One night! There were three tonnes of carpet tiling and industrial venting all the way through the building. Even paring this house back to its bones was a mammoth task. 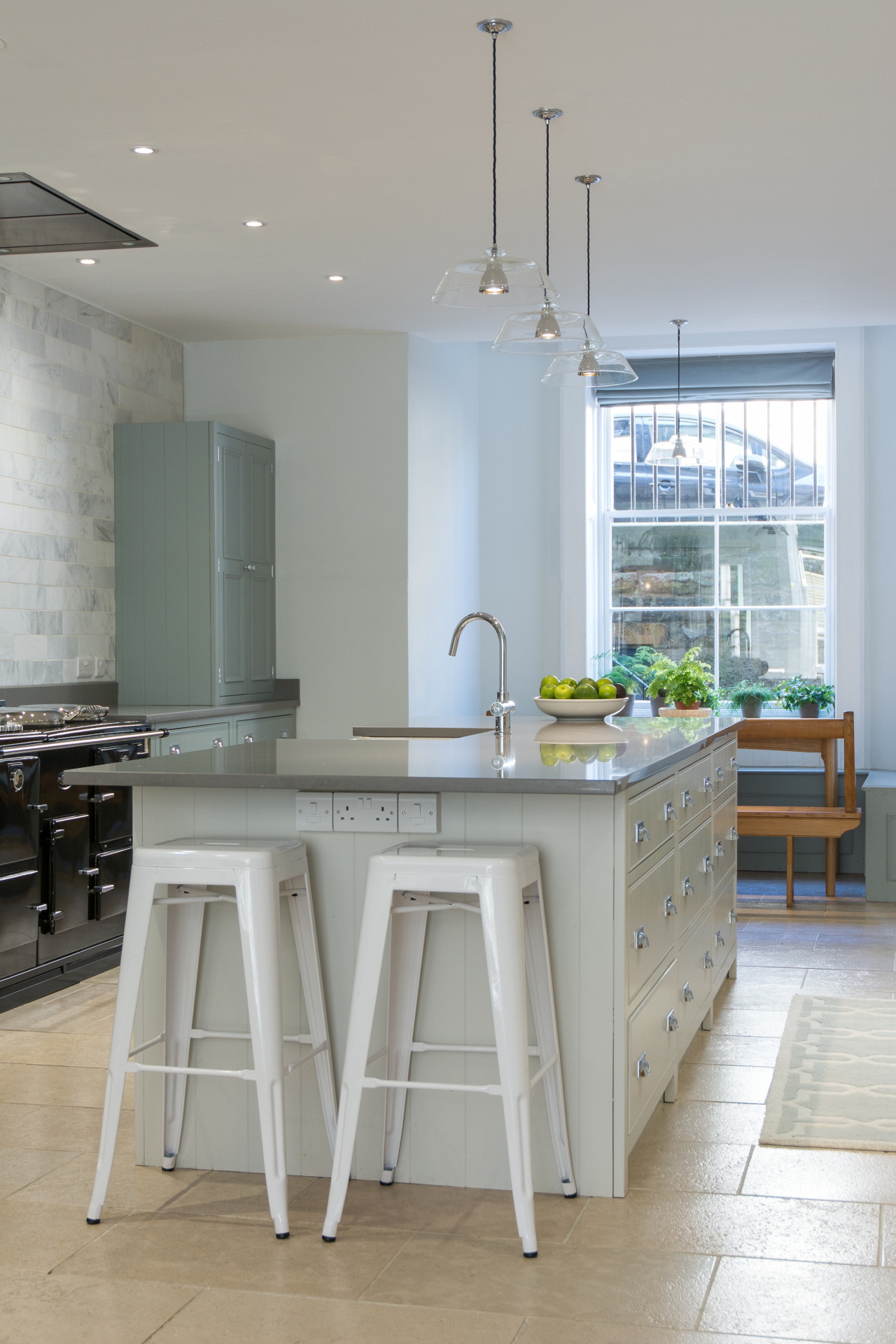 One feature is striking as soon as you walk in today: the quality of the materials used throughout, from the oak herringbone parquet flooring laid on the ground floor to the beautiful limestone flags that flow through the garden level – with underfloor heating. “We wanted a high quality of finish and materials that would endure,” Katie says. “Being consistent with the finish was important to us.”

The kitchen really is knockout in the flesh – if anything, the chalky blue-grey colour palette is even more subtle while the striations and colour tones in the Carrara marble wall tiles appear even livelier and more beautiful. It’s this kind of detail that sets this space apart: rather than adding the marble splashback simply behind the range cooker, the couple used the Carrara to clad an entire wall. The solid oak kitchen cabinetry is by Neptune with Silestone worktops from Granite Systems, while those pendant lights are from Jim Lawrence. As John says: “We didn’t want anything that would date. You can get a great looking modern kitchen, but you don’t know what it’ll look like in five years time, and we wanted to know that we wouldn’t be changing anything down the line.” 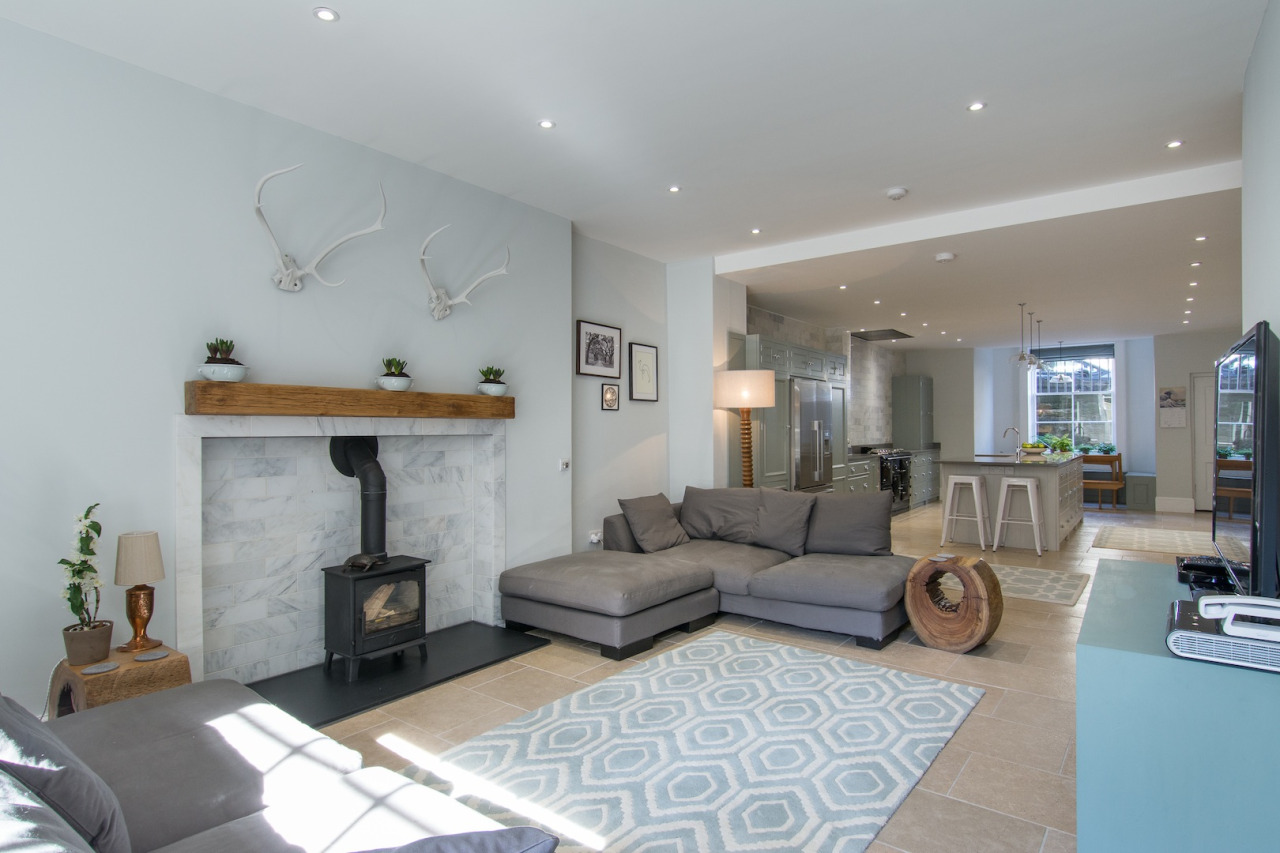 Katie and John spent a long time in the early stages of the process sourcing materials online, and even went as far as to get tiling samples sent from abroad. In the end, they realised something fundamental: they preferred dealing with suppliers face-to-face, so they sourced all the materials from local companies – including bathroom fittings from Victor Paris – or from companies with local stores, as with the tiling from Fired Earth.

There were a few good discoveries as the house was stripped back, including the fireplace in the seating area on this garden level, which they excavated. “Finding these features that had been hidden for a long time gave us a real sense of satisfaction,” Katie agrees. 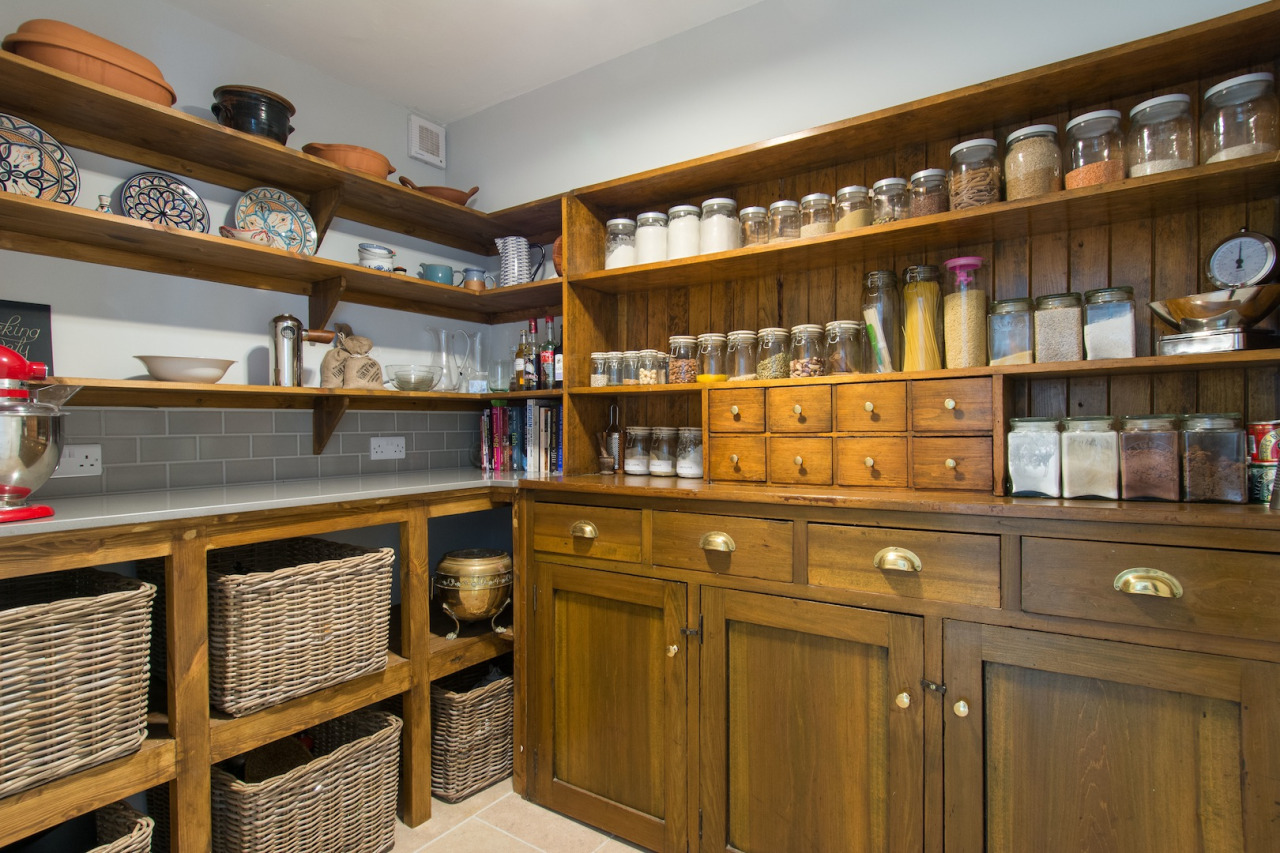 And talking of lustworthy spaces, it isn’t every day that I turn up at a house and find myself swooning over the larder. Yes, seriously. But this larder is wonderful – and demonstrates how even the smallest, most functional space in a house can be noteworthy is designed with a bit of inspired thinking.

Here, bespoke cabinetry made by Jonathon Morrice of Newtown Renovations – who was also the lead contractor for the project as a whole – is combined with a Victorian dresser that Katie sourced on eBay. In a grand period townhouse that’s filled with period features, it’s fitting that this dresser has a patina of age and feels as if it’s been here for a hundred years. Some houses are about grand statements; others are about careful attention to detail. This townhouse marries both. 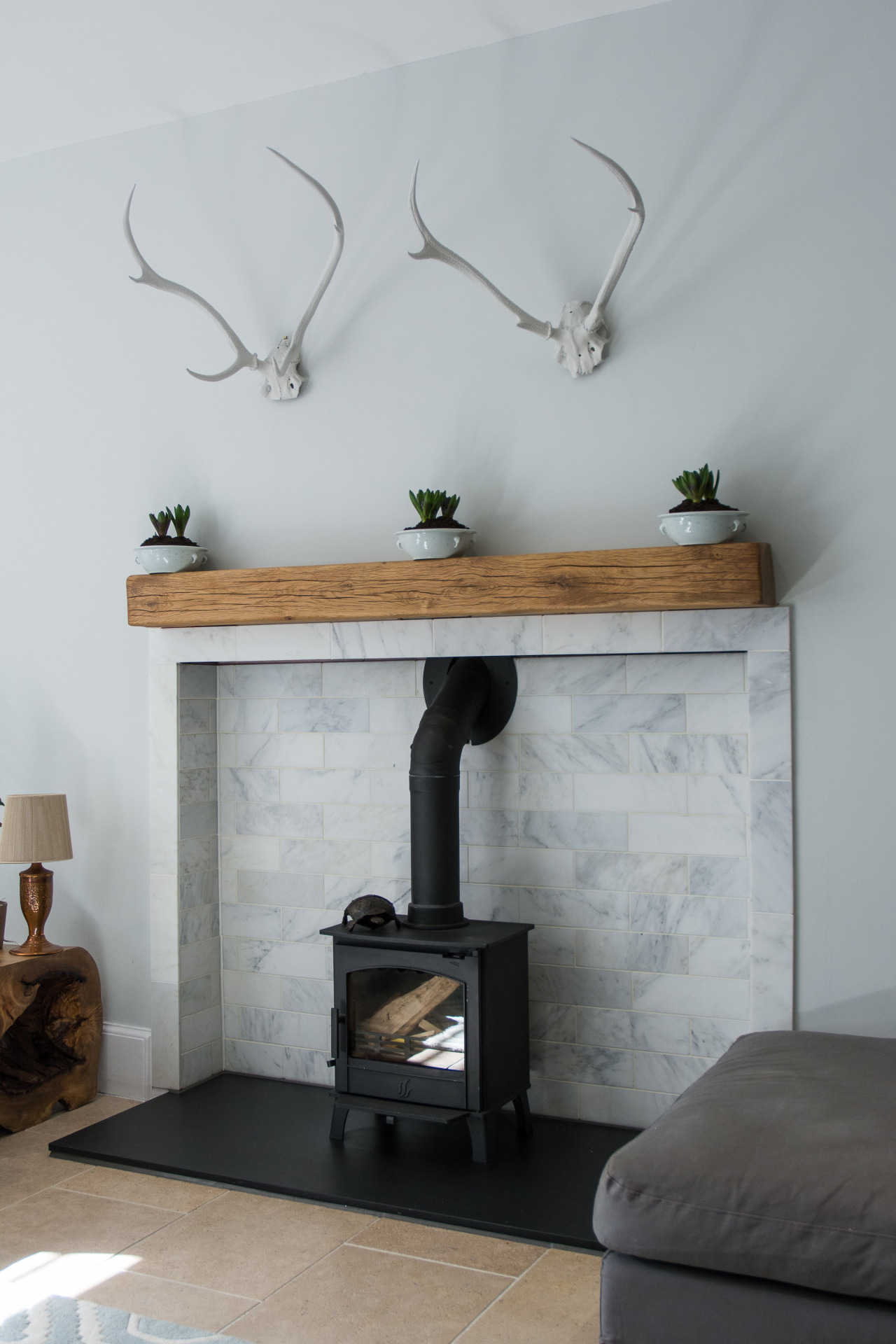 6 Palmerston Place is on the market with Strutt & Parker. See my Steller story on the property.