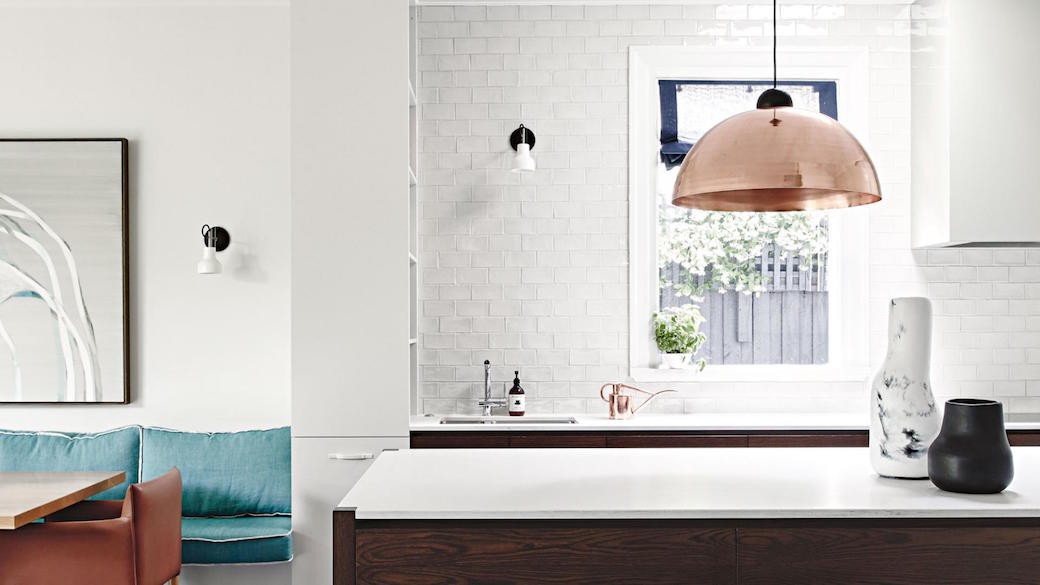 I love when I happen across a photo while scrolling on Pinterest and click through only to find a fantastic house, as was the case when I repinned this photo (below) from Inside Out and came to this dramatically redesigned 1970s home in Melbourne, which was featured in the magazine. The entire house has been beautifully designed by Chelsea Hing – you can find the gallery of photos by the very talented Eve Wilson here – but the space that really caught my eye was the light-filled dining and kitchen zone. 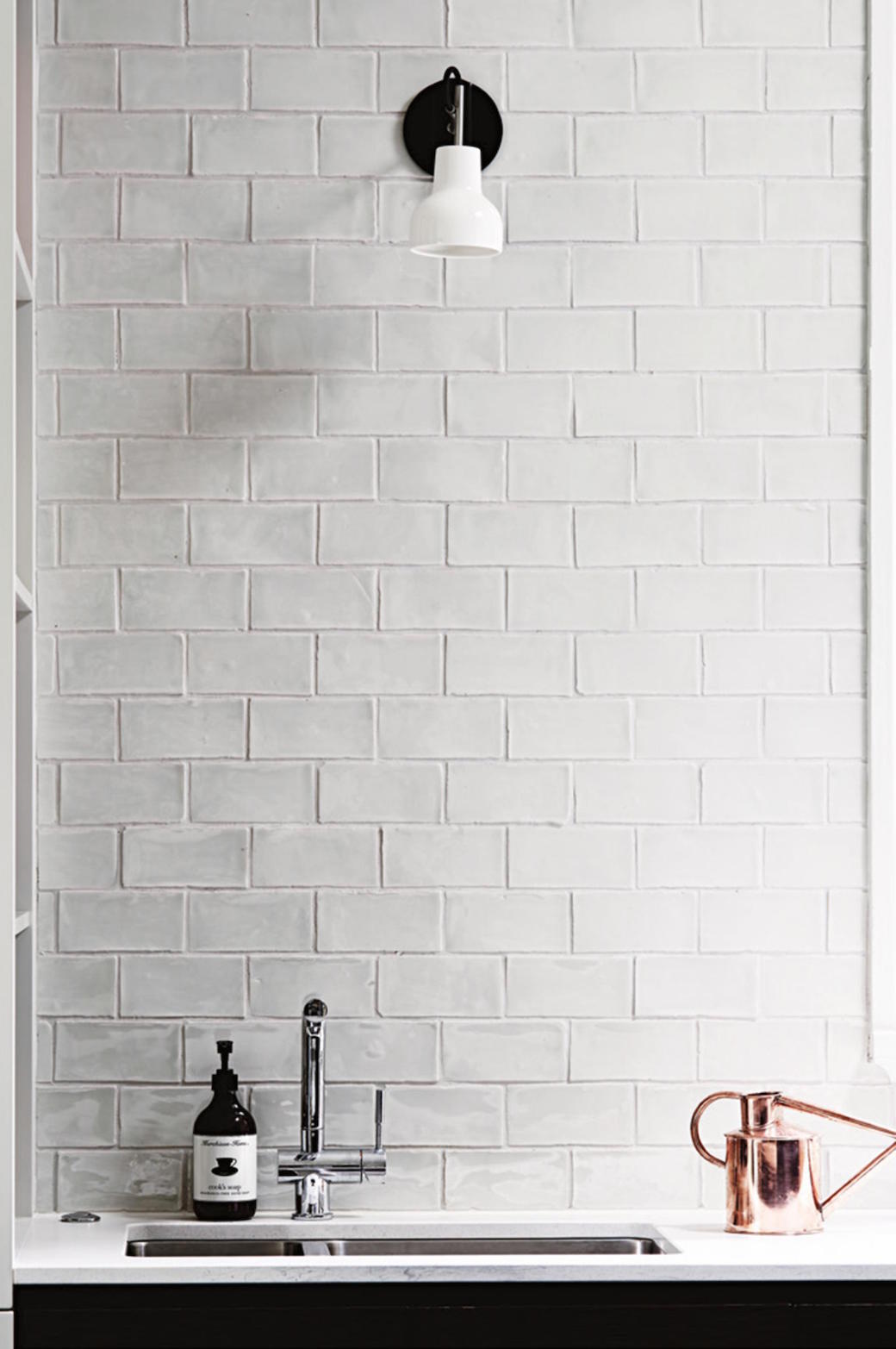 So yes, I’m obsessed with subway tiles. In bathrooms, in kitchens, in cafés, wherever they can be used basically. And these tiles, above, are particularly beautiful. They remind me of the Forecast collection from Fired Earth – named after the shipping weather forecast in the seas around the UK, the icy blue-grey Cromarty is my personal favourite.

But then everything else about this kitchen is also pretty perfect, from the sleek dark timber cabinetry to the copper pendant lighting. The design is pared back and simple without being cold. 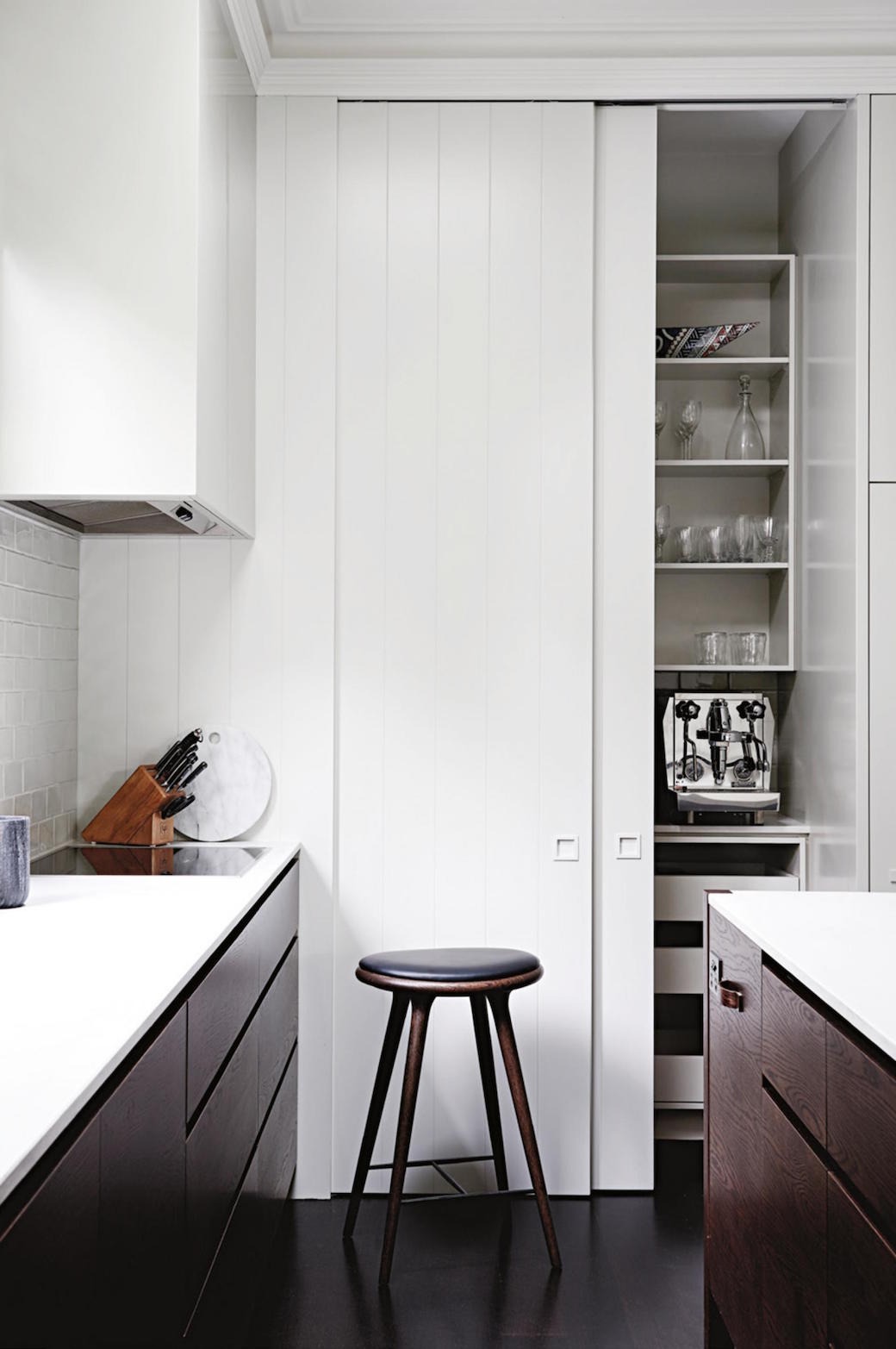 The existing 1970s three bedroom house had a poorly conceived floor plan, which Hing reworked, and part of this redesign process was the creation of a larger kitchen and dining area. Notably, the owners spent four years fine tuning their own ideas for the house before presenting Hing with a carefully detailed brief. While the whole house was redesigned, the catalyst for the project was actually a new kitchen – the design expanded as the couple considered the house further – but this suggests just how important this kitchen was within the bigger plan. 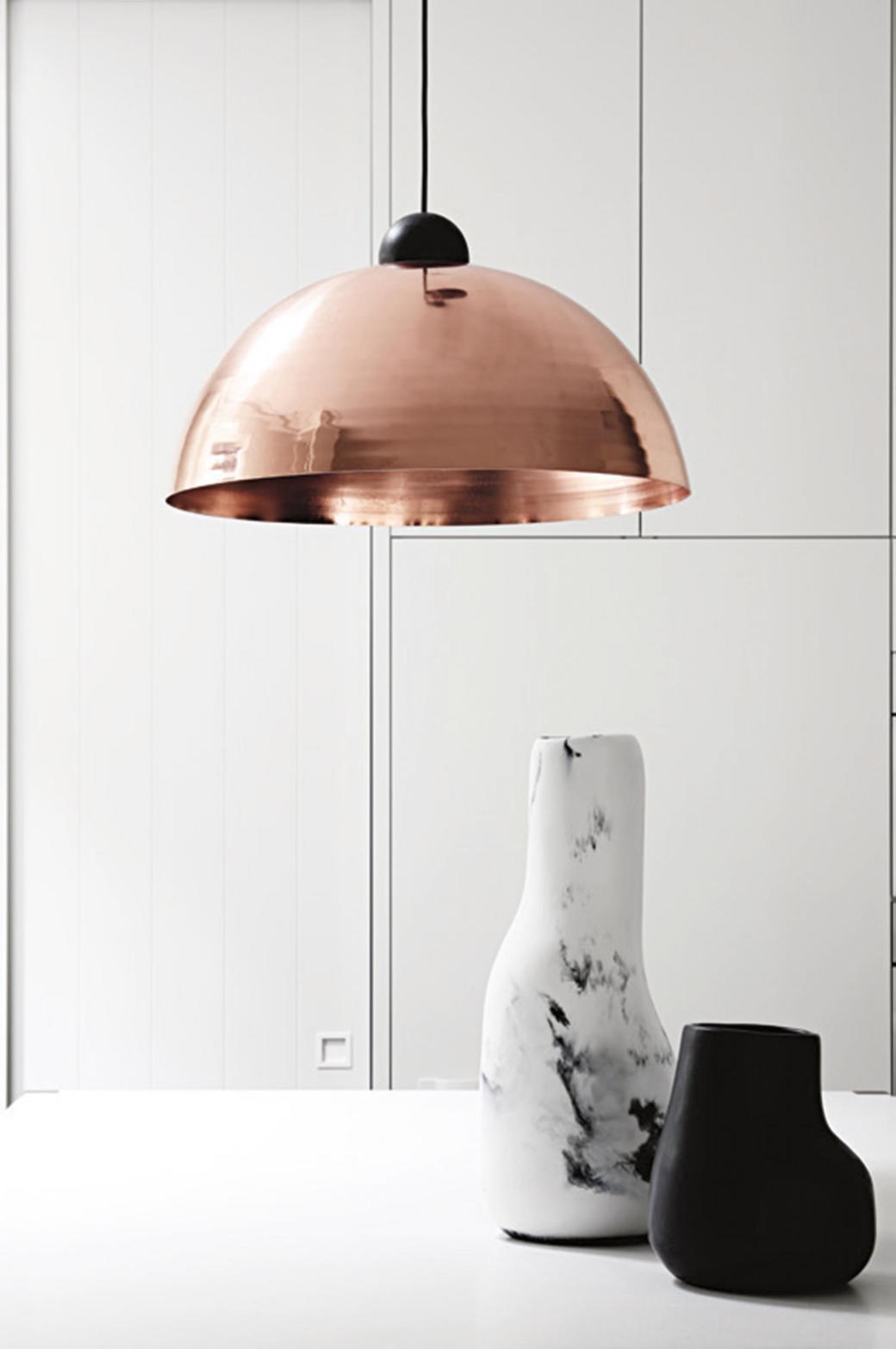 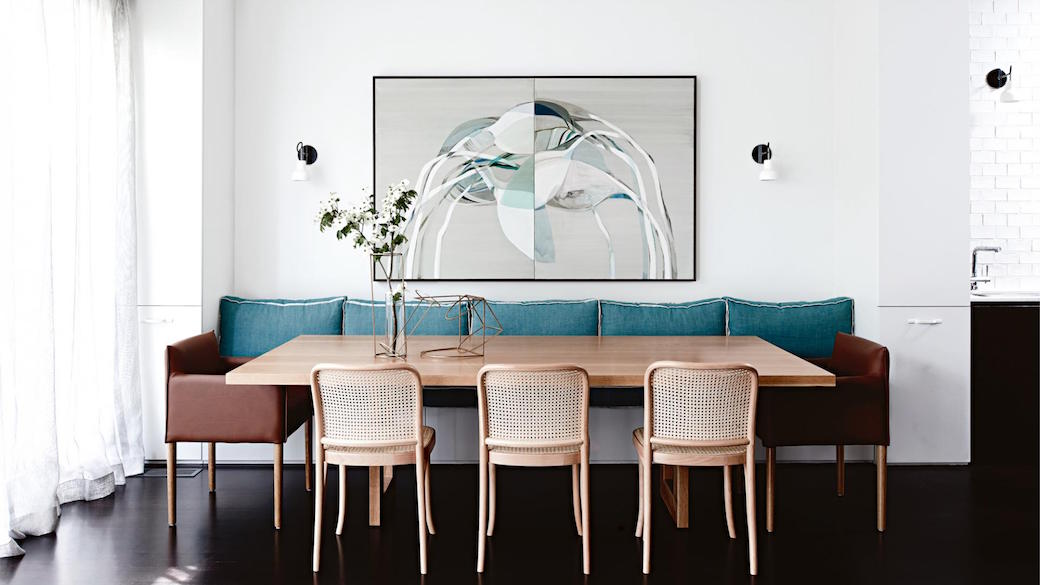 There’s the saying, ‘good things come to those who wait’, and this was certainly the case with this project. While most of us don’t have four years to consider a new design – here, the owners relocated to the country and let the house, and then spent that time thinking about what kind of home they wanted to return to – this project demonstrates the importance of getting the space itself right. The couple have reorientated the living space to the rear, where there’s more natural light, and this alone is pretty fundamental regardless of geography.

As for what I’d take from this kitchen? If budget allowed, the full-height wall of textured subway tiling is an idea I’d love to use somewhere, and I like these understated wall lights – the Stirrup 1 single wall light by Original BTC would be my top choice. 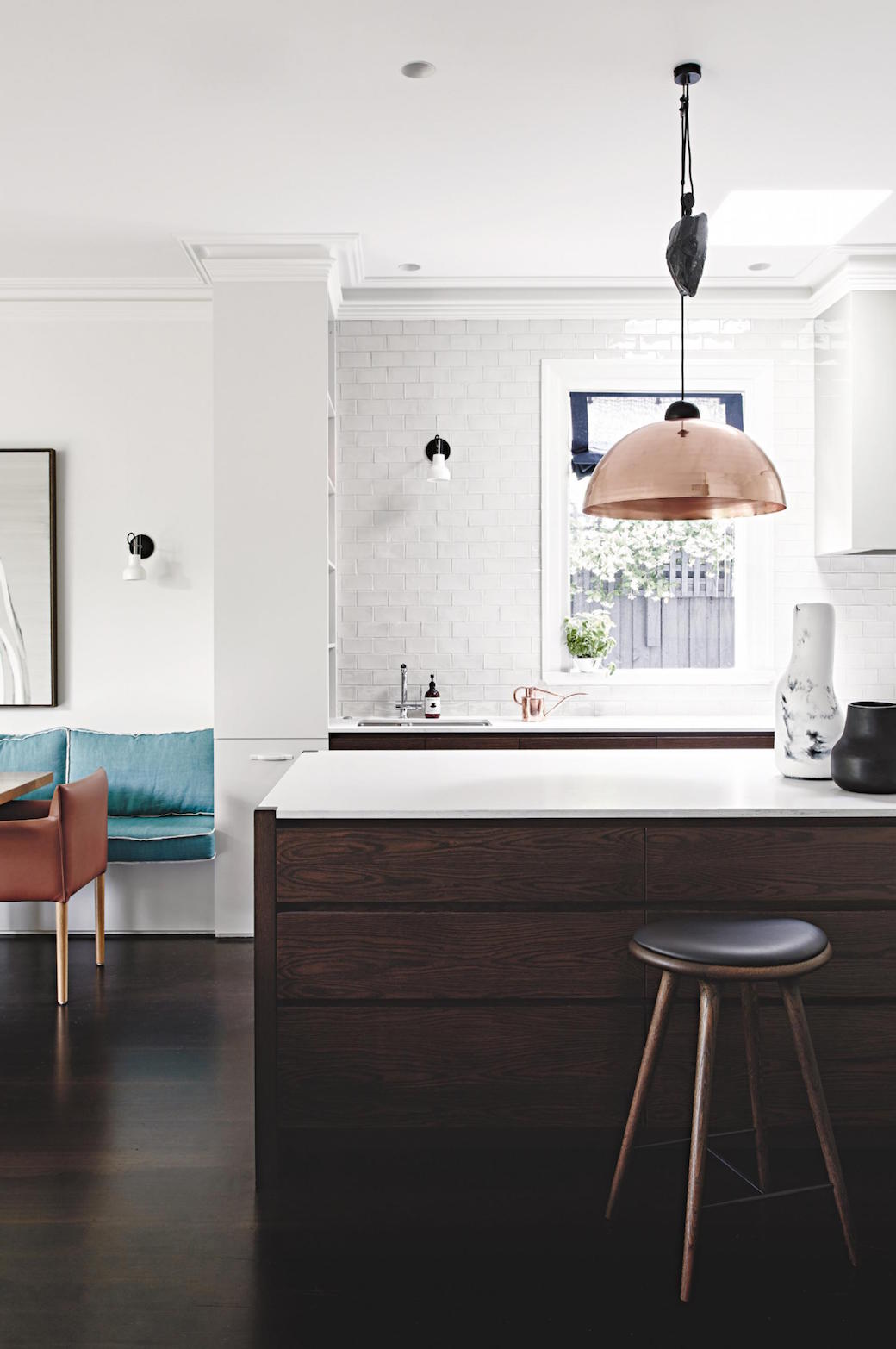 See more of this wonderful home on Inside Out. All photography by Eve Wilson.