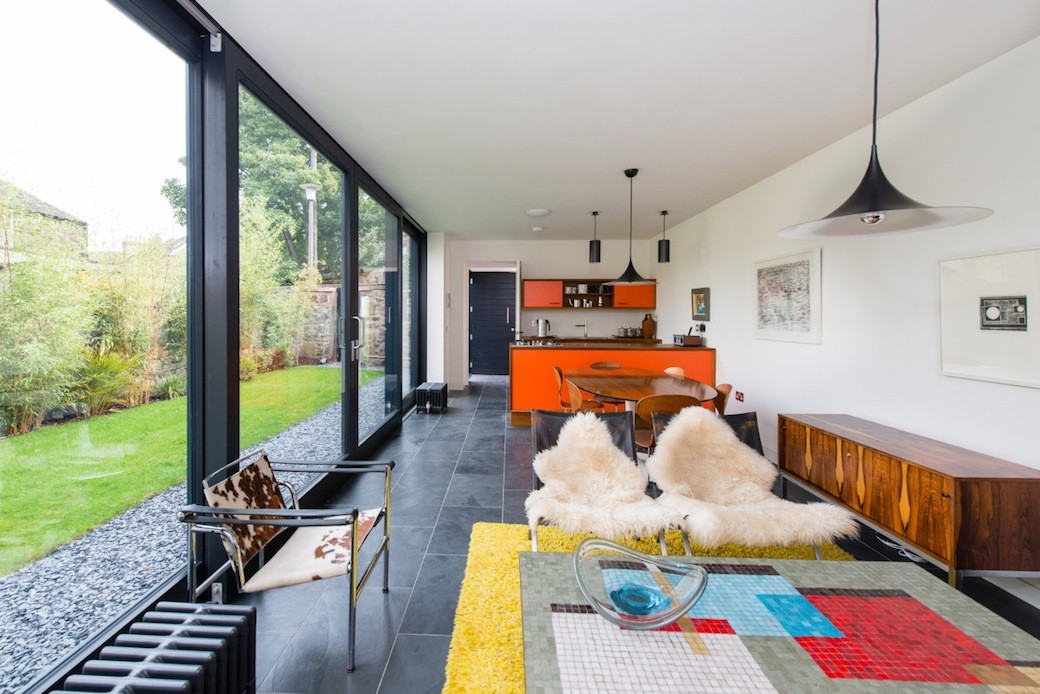 Arriving outside the entrance to Rachel Green and Andrew Fletcher’s home, which is tucked up a cobbled cul-de-sac of traditional mews houses in Edinburgh’s West End, the first clue that this property might be a bit special is the black gate with its crisply detailed address plate.

Still, the ‘reveal’ as you walk through the gate is quite something. The city’s West End is filled with handsome period houses, yet once inside this walled garden you discover an elongated glazed building that forms the open plan kitchen, dining and living space of Rachel and Andrew’s home. From the cedar-clad entrance to the glazed link that connects this building to the original property – now a bedroom wing but previously a one bedroom property with a dilapidated conservatory tacked on along with a garage – everything about this contemporary space feels like a surprise. Indeed the house was shortlisted for the Edinburgh Architectural Association’s ‘Small Project’ Award in 2013. 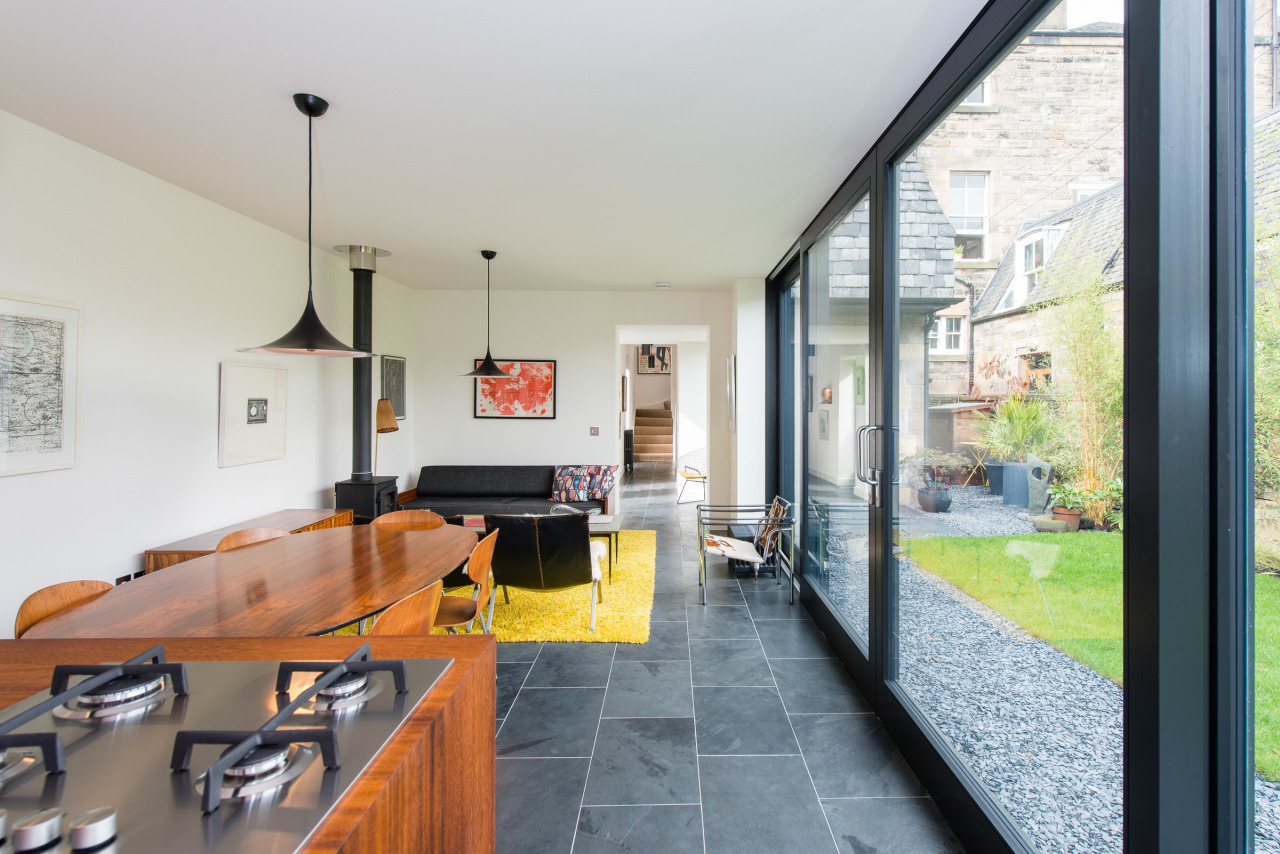 I chatted to Andrew and Rachel about what led them to this project, where they took their ideas and inspiration from when redesigning their home, and how they went about furnishing the spaces to look this good. I should point out that Andrew owns the business Twentieth Century Antiques specializing in mid-century and post war design, so this interior is a showcase for some of the couple’s most treasured pieces, from designs by Poul Kjaerholm and Florence Knoll to 1960s kitchenware – all of which can be sourced through Twentieth Century Antiques.

Clearly, this house has changed a lot since you bought it, so what first attracted you to the property?

Rachel: We’d always wanted to build our own house, but where do you find a plot in Edinburgh’s West End? Thirty years ago when the townhouse behind this building was divided into three flats, the annex building – the one bedroom property we bought – was sold off with the garden, so this really was one of a kind. I’d rented a mews house before and loved the whole sense of community that comes with mews living. Also, between us, we’d had seven properties and they’d all been flats, so we wanted our own front door and roof, and this gave us the chance to build. 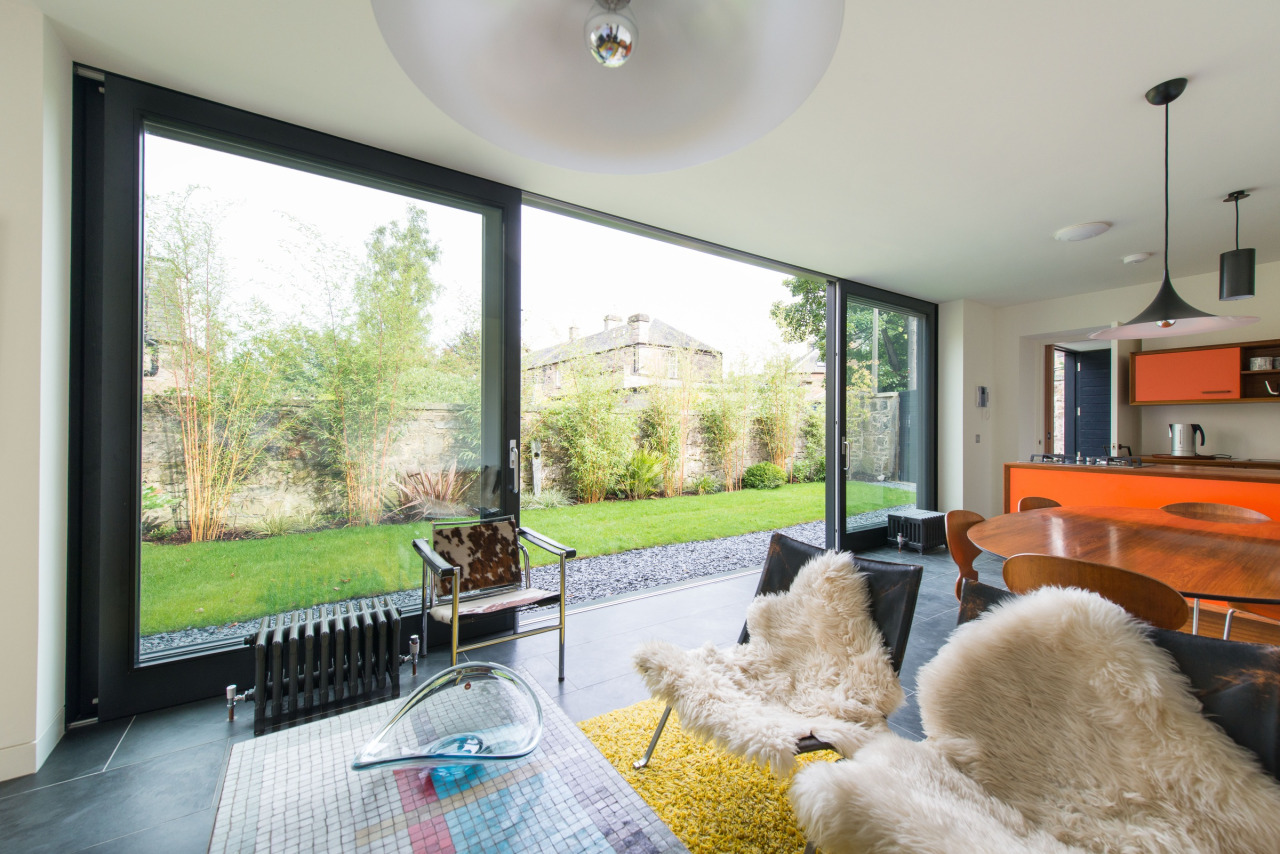 How did you go about the design process?

Andrew: Because there were two existing buildings – the original one bedroom house with conservatory and the garage – we were able to use the same footprint and build this extension where the conservatory and garage used to be. The local planning department wanted a distinct separation between old and new, which led to the glazed link. We knew from the outset that the original part of the house, which previously had a living room and kitchen, was going to be the main bedroom. It made sense for the living and dining and kitchen space to be in the new extension, opening out into the garden. This arrangement felt like the natural flow of the property.

Where did you take your design inspiration from, and who did you work with?

Andrew: We worked with architect Akiko Kobayashi of Kobayashi Studio. The design concept was really an amalgamation of years spent researching things and taking inspiration from Scandinavian and modernist houses. 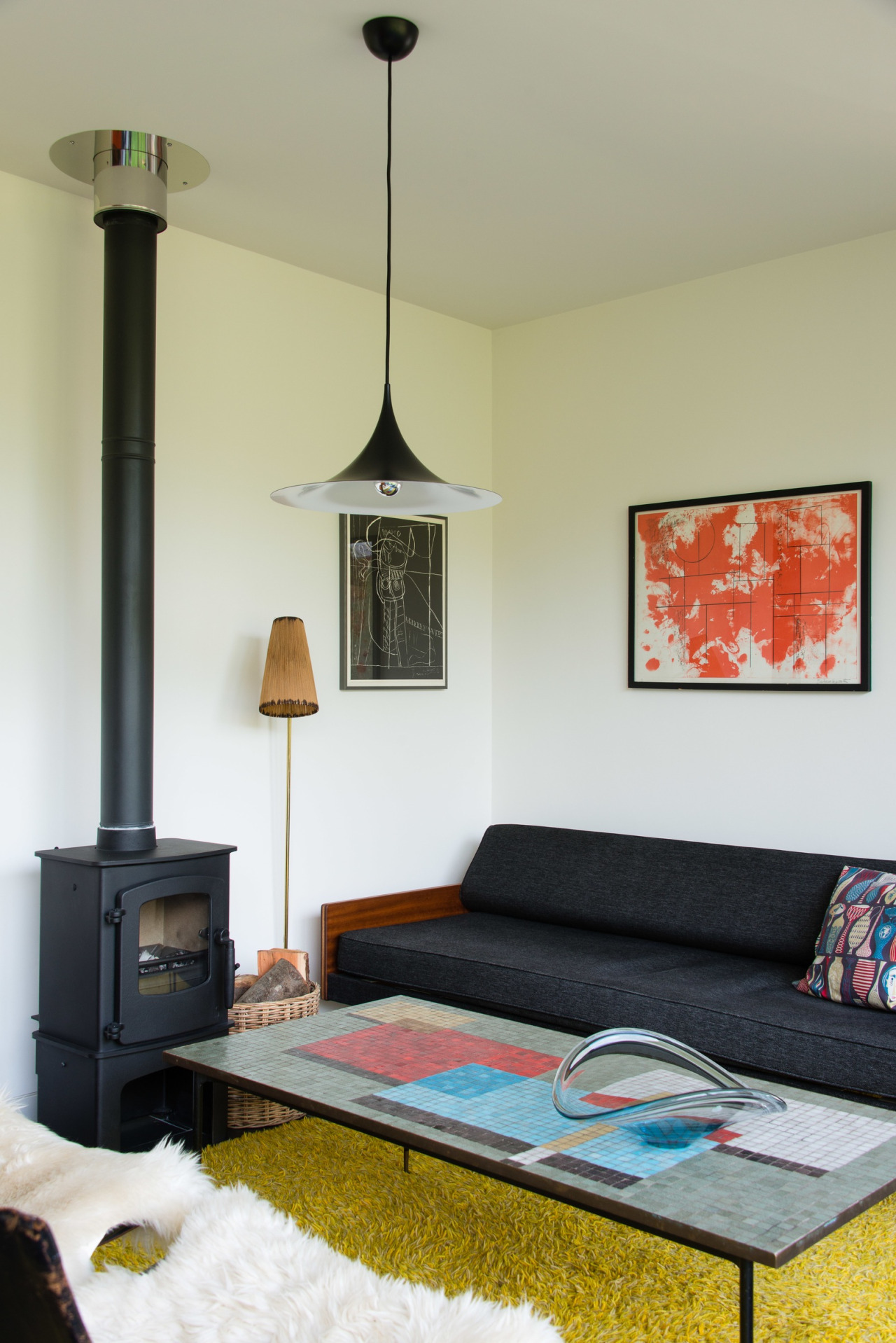 Rachel: As soon as we walked through the gate into the garden the space told us how to design this house – single-storey, flat-roofed – and everything is about modern technology, from the triple glazing and the high levels of insulation – which is why we can have a slate tiled floor without needing underfloor heating – to the living roof on the extension.

Andrew: We liked the idea of the living roof, which you can see from the bedroom upstairs, and it’s also better for our neighbours above to look down onto a sedum roof than onto a standard asphalt roof.

How did you choose the external palette?

Andrew: We wanted the house to have really clean lines, so we chose the anthracite-hued zinc for the roof and charcoal render for the exterior, which is by a company called Sto. It’s a very neutral colour against the surrounding stone. The windows and doors are painted in RAL 7021, which is described as ‘black grey’. In the glass link, we took the glazing into the stone walls rather than creating a frame between the glass and the walls, so it’s very clean lined. 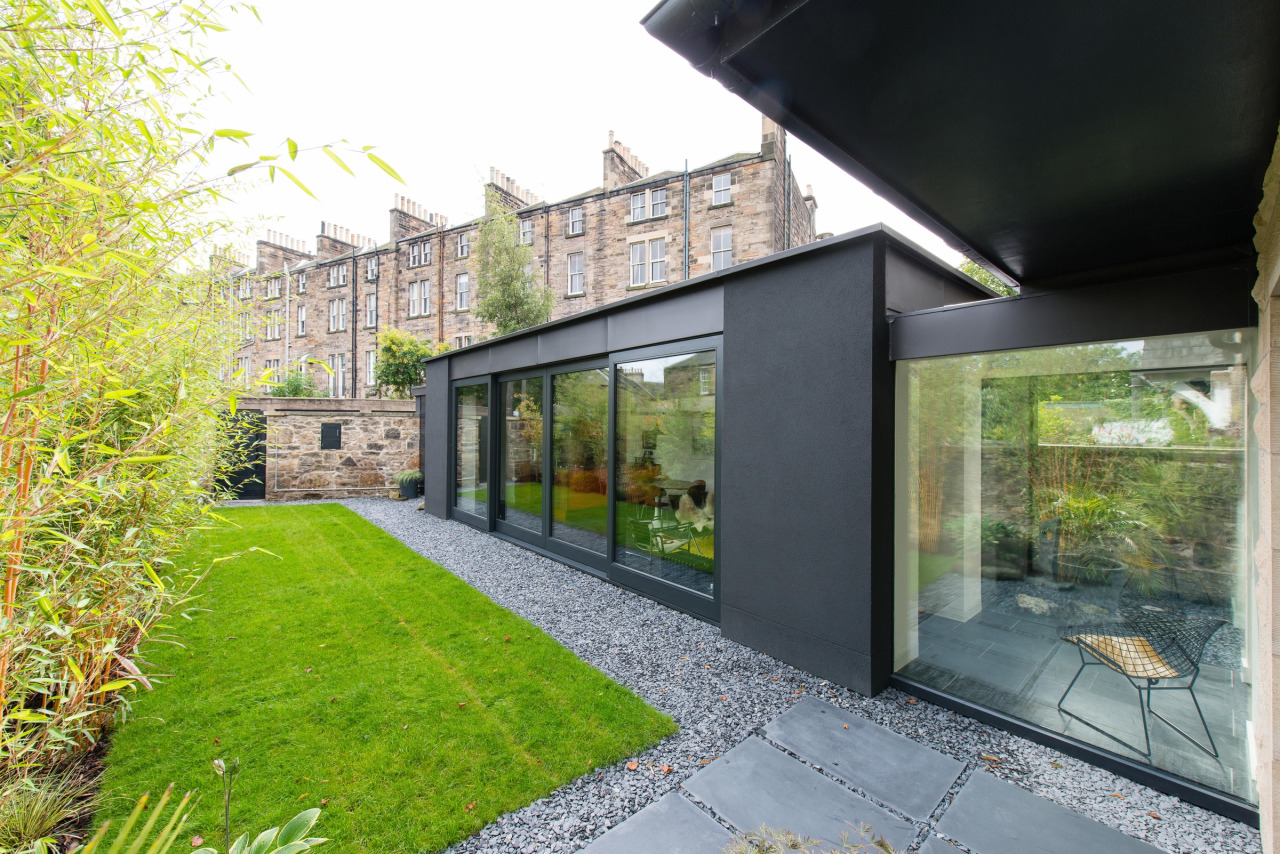 Did the build process throw up any challenges?

Andrew: We started on site in February 2012 and finished mid-way through August, and I think one of the main challenges was that we were building through one of the wettest summers we’ve had in years. But when we really needed dry weather there was, like the day the rubber membrane was laid on the roof, and the sedum also arrived on a beautiful sunny day.

There are quite a few bespoke elements within the interior, including the handmade kitchen – what made you take this approach?

Rachel: We wanted a kitchen that would feel like furniture, so we went back to this ideal of mid-century furniture, which is something we’re both passionate about. The kitchen was made by Richard Anstice of 56 North. We took the idea from a Danish ice bucket that Andrew bought for my birthday. It’s a 1950s piece by Jens Quistgaard with a teak exterior and an orange interior. Rather than teak we used iroko, and picked up the orange on the wall cabinets and on the island. 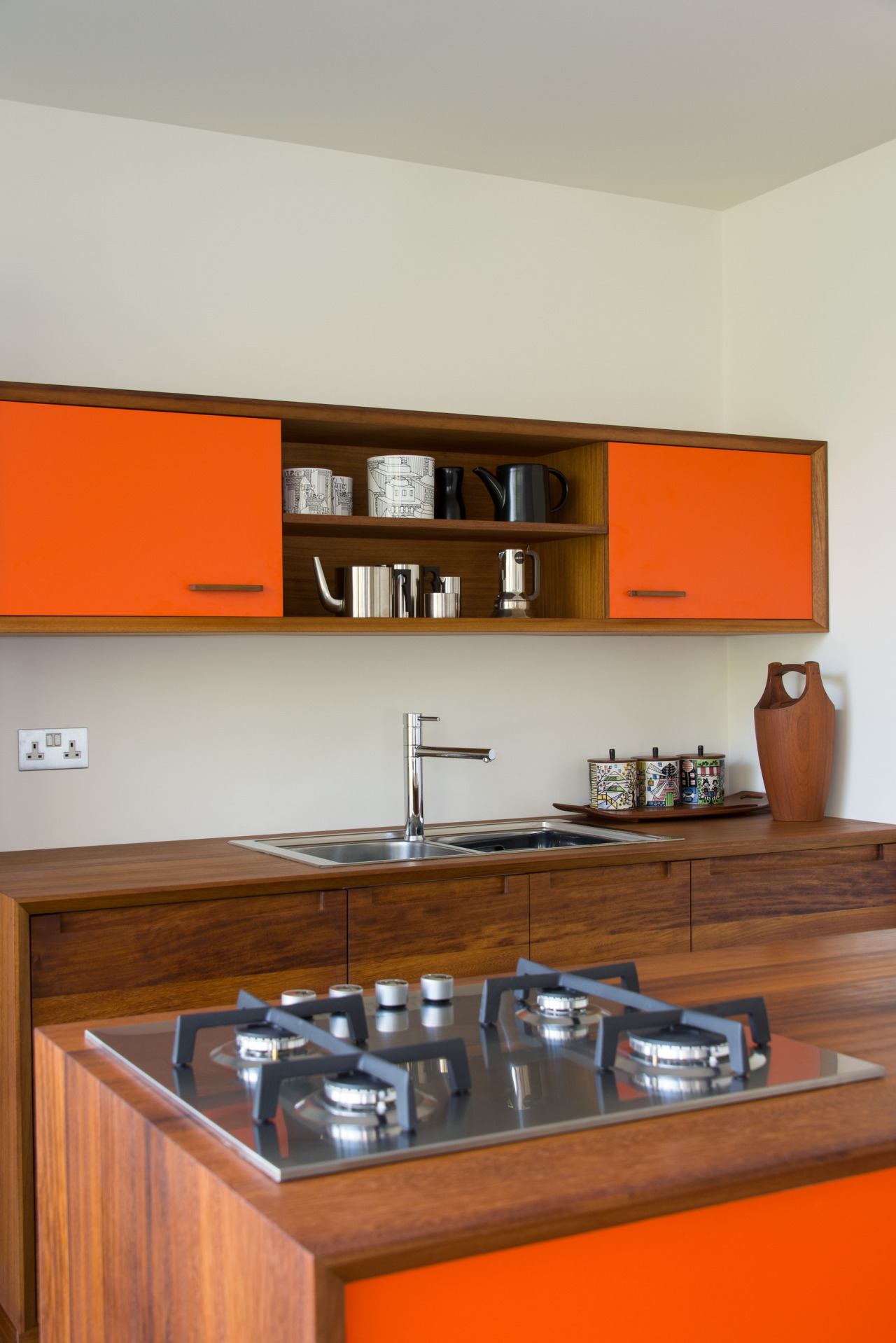 Richard also made the built-in oak wardrobes for the bedroom upstairs. Because the ceiling upstairs is coombed, it made practical sense to have wardrobes made, but we also like that feeling of walking through a wooden box into the room. We wanted this bedroom to have a more Scandinavian country feel.

Where did you source the other fittings and finishes?

Andrew: The Brazilian black slate floor tiles used throughout the extension and in the bathroom and the en-suite shower room are from The Natural Slate Company, and we sourced the refurbished cast iron radiators from EASY. The woodburning stove is the Cove 1 stove by Charnwood. All the bathroom fittings are by Duravit.

Needless to say perhaps given your business, Andrew, the pieces you choose for your own home must be pretty special. What are the key pieces within the main living space? 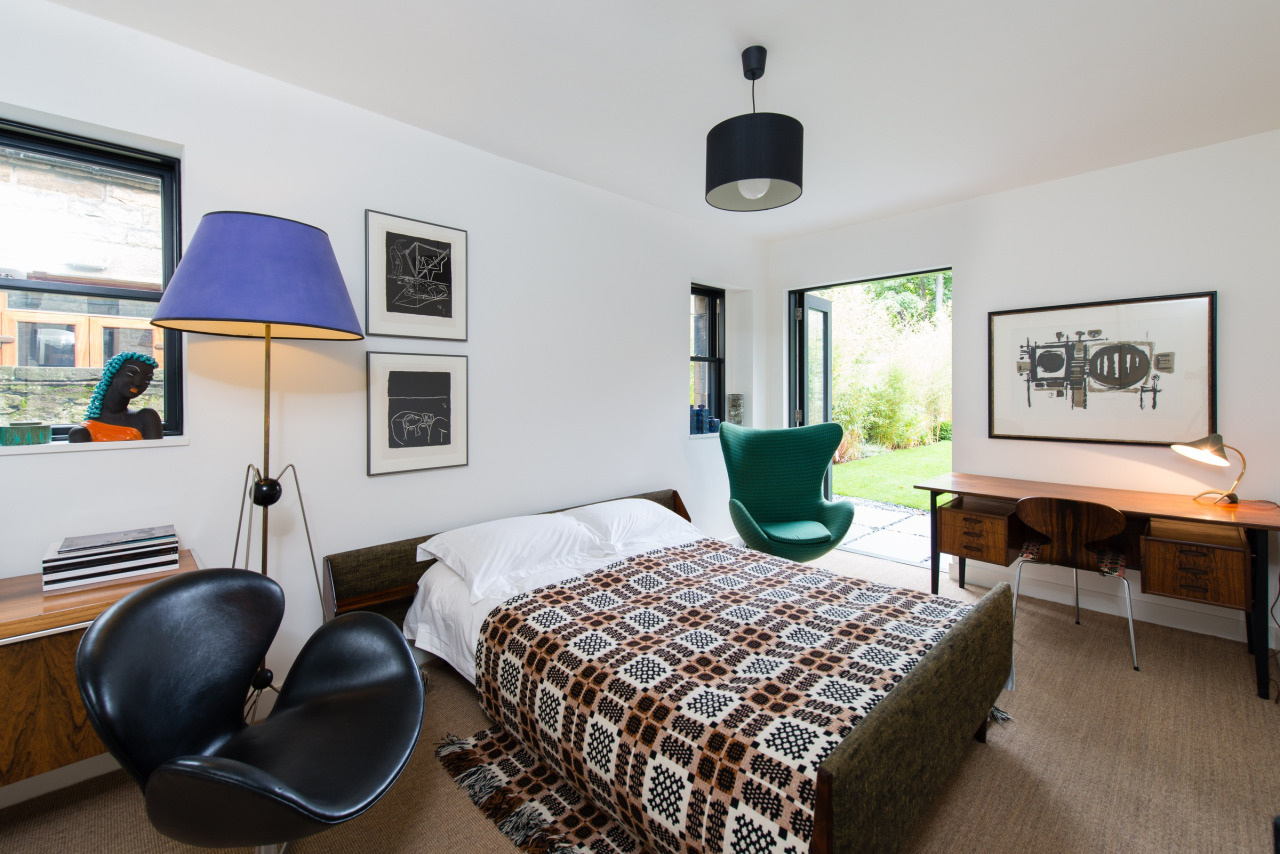 And what about the pieces in the main bedroom?

Andrew: The bed is a 1950s Danish design by an unknown designer, I’m afraid, while both the Egg chair and the Swan chair were designed by Arne Jacobsen. The blanket on the bed is a traditional Welsh design from the 1960s. The rosewood desk is 1950s Danish piece, and the artwork above is an original print by Henry Cliffe from 1964. The floor lamp is a French design from the 1950s and the figurative sculpture on the window sill is a Czechoslovakian piece from the 1920s that I bought in Prague. 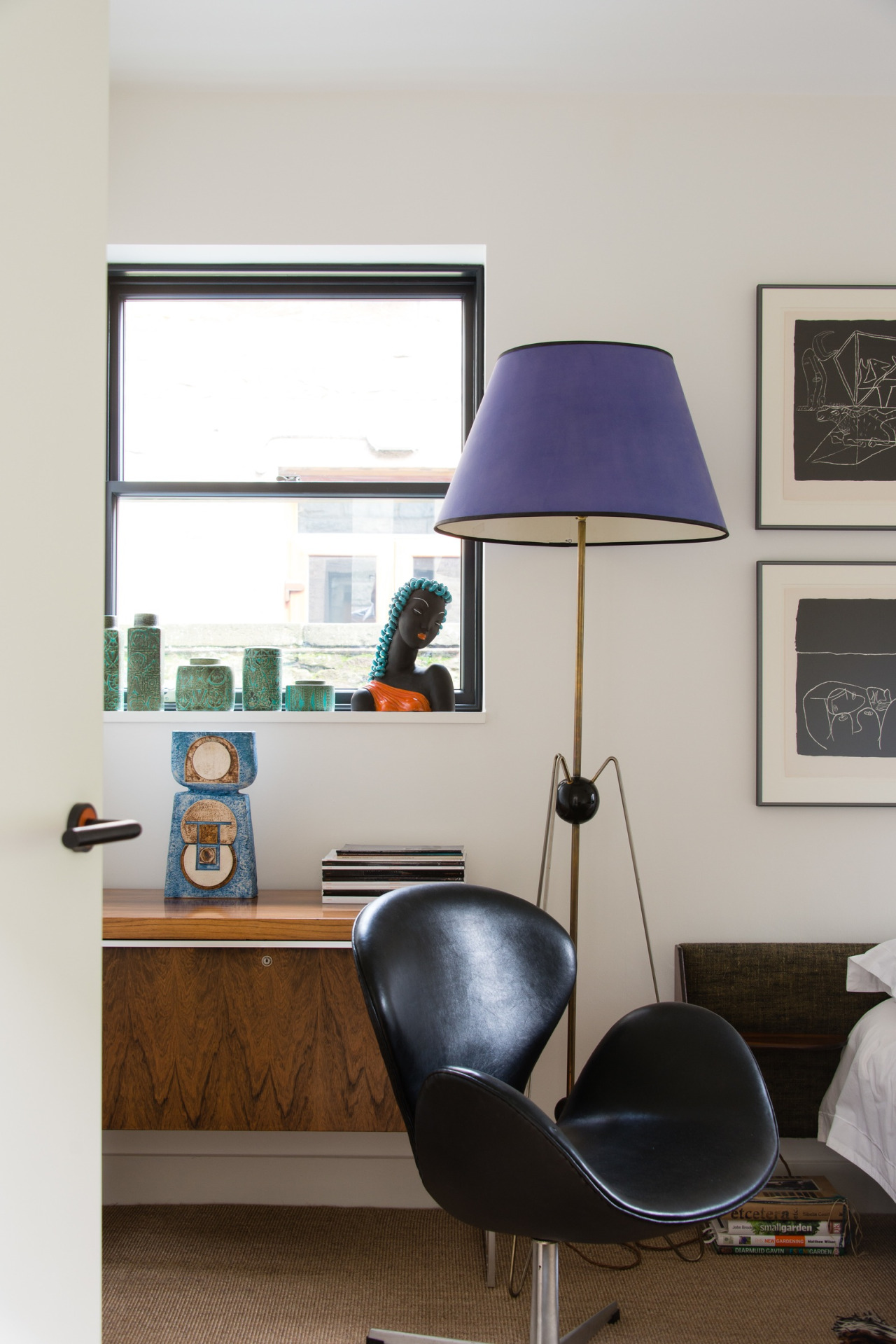 Now you’ve been living in the finished house for a while, are there any areas or details that have really exceeded your expectations?

Rachel: I absolutely love the vestibule, which is clad in timber. I love walking in here in the morning and getting that waft of cedar.

Andrew: I like sitting at the dining table with the doors open looking out into the garden, but one of my favourite moments about the house is when you come round the corner into the mews – there’s that anticipation of walking through the gate to this. 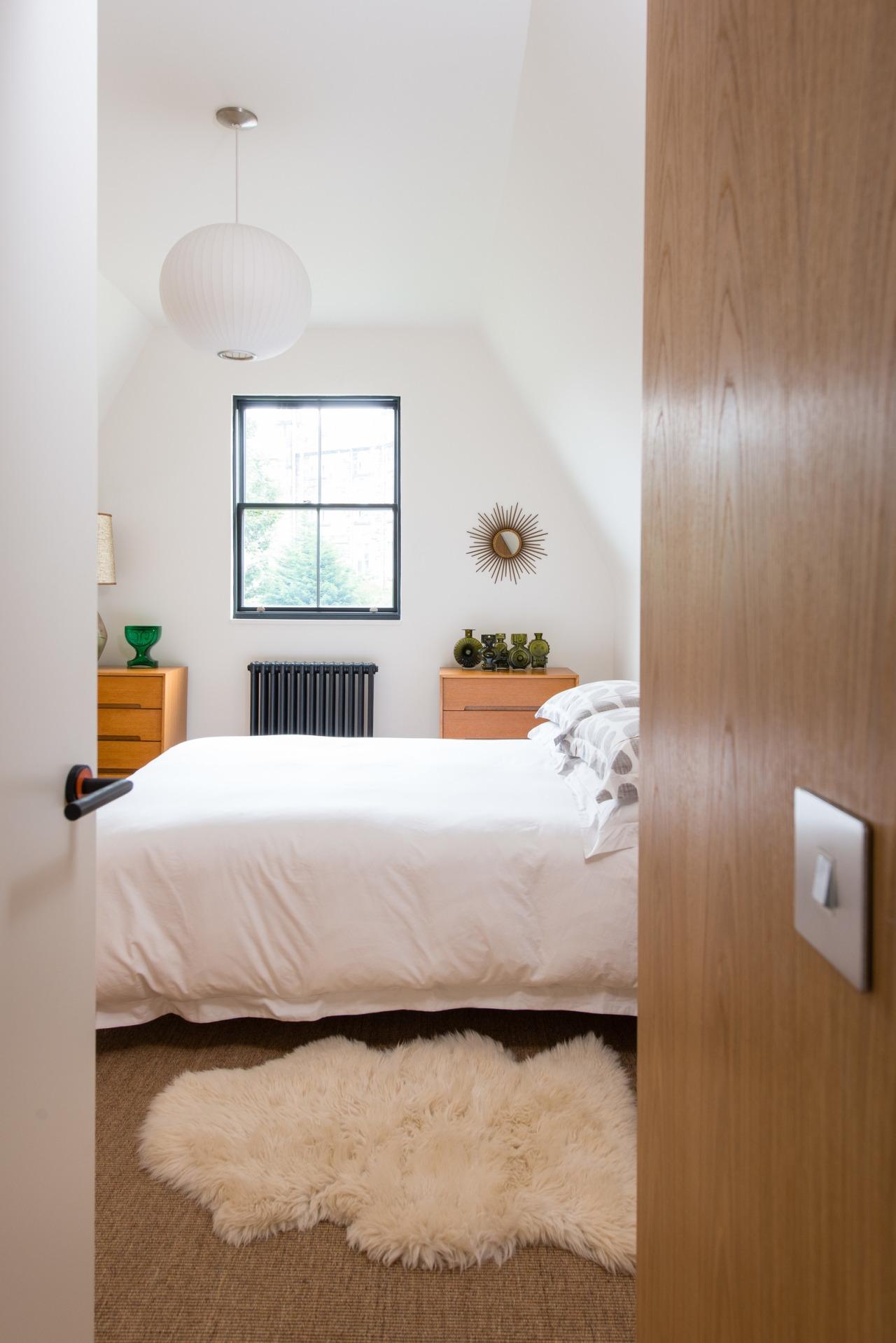 How will this house influence what you do next?

Andrew: This is the first property I’ve had with its own private garden and the way the house sits quietly in it has been very successful. The interaction between the house and garden is very special and I love spending time here. Outdoor space, whether it be a garden or terrace, is a must for next time. What we’ve also realized is that if you successfully combine a great design, attention to detail, light and outdoor space, we don’t need a huge space with lots of room to be really happy – a log cabin on the French Riviera is very tempting!

Rachel: For me there are three options: I’d either like a house by sea, a 1950s or ’60s modernist house, or a plot of land to build on. I would never go back to a period house again after this. This house is about modern day living and comforts, where it’s spacious and warm and you get lots of light. Aesthetically, this house is us. It’s turned out exactly as we imagined it would.