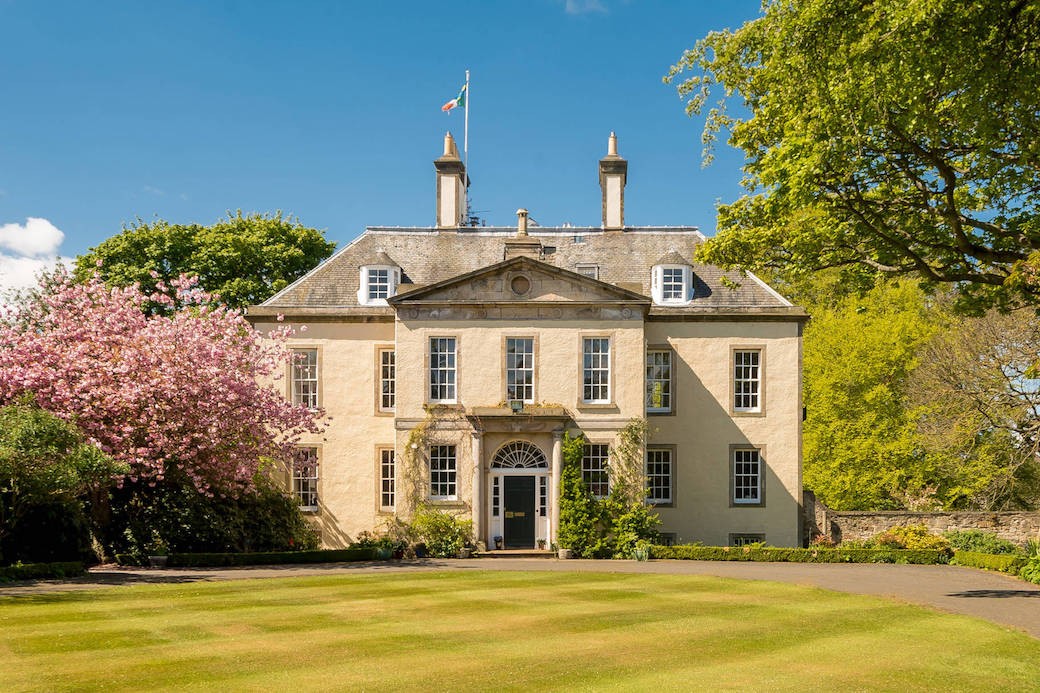 When I first heard about Drylaw House, I’ll admit I wondered about the location. Looking at the exterior photo of this handsome Grade A listed house, I didn’t expect it to be located just 2 miles from Edinburgh’s city centre. It’s a house you might expect to be surrounded by open countryside. So when I went to visit a few weeks ago, I wondered whether I’d be conscious of the surrounding city. Could you live at Drylaw and have all the benefits of urban living, but yet forget about the city when you wanted to?

And yes, I discovered, as soon as you approach up the long tree-lined driveway, you forget that this is Edinburgh. You forget that Drylaw House sits within a residential area. You forget the traffic passing by outside the three acres of grounds that enclose the house. By the time you pull up in the driveway, you could be anywhere. And this is just the first of many surprises. 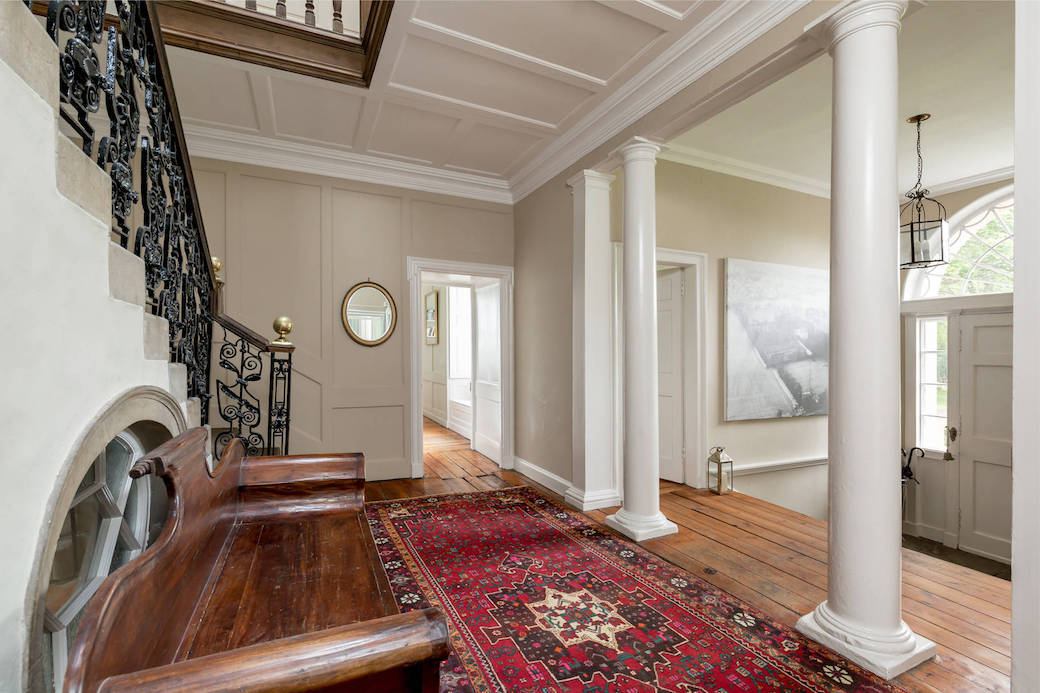 As you walk into Drylaw House there’s a framed canvas just inside the hallway – on the right of the photo above – which shows an old photo of the property as it looked many years ago, probably in the early half of the 20th century. The house – which is now on the market with Coulters – is surrounded by trees, as today, and then by open fields, and it’s a reminder that that this property has been standing here for much, much longer than the city than now surrounds it. 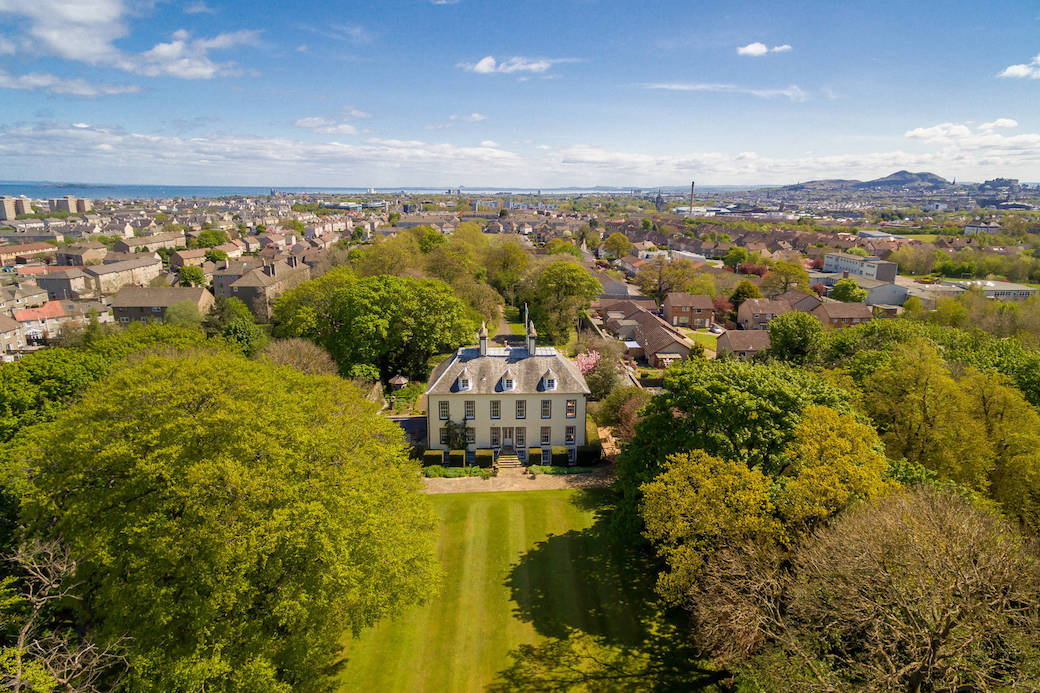 The earliest part of the house dates back to 1718 and was built by the wealthy Loch family using sandstone taken from their own quarry at nearby Craigleith. Records show that the Lochs sold the house and the quarry in 1786 to a William Ramsay – just before the stone from the quarry was used to build Edinburgh’s New Town, which was bad timing for the Lochs as they lost a small fortune by selling when they did. 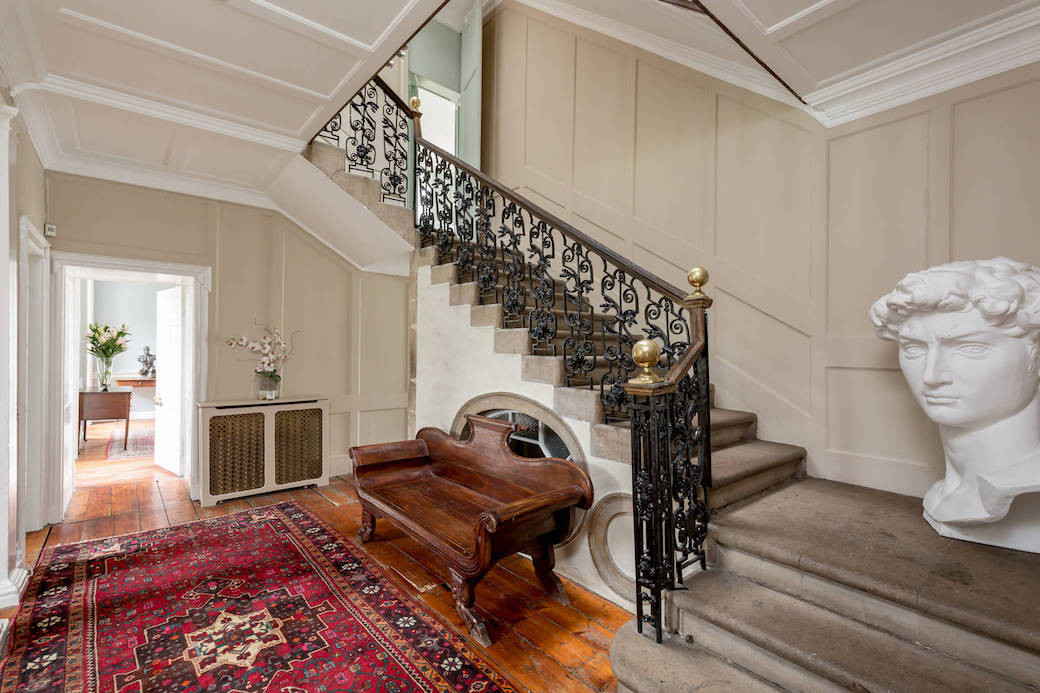 Drylaw House is described as “Queen Anne style” in reference to the monarch who died just four years before its construction. Spread over four floors, the house extends to over 7,000 sq/ft including 10 bedrooms and 5 reception rooms, and is currently arranged so that the entire basement level can work as a self-contained four bedroom flat.

Scale aside, however, what’s really striking is the quality of the period detailing, and the simple fact that so much of it has survived intact. There was some remodelling to the house after Ramsay took it on in 1786. What’s now the rear of the house was originally the front, but the entrance was moved during the Georgian era with the addition of a two storey stone extension with Roman Doric-style detailing, creating today’s very impressive introduction to Drylaw. 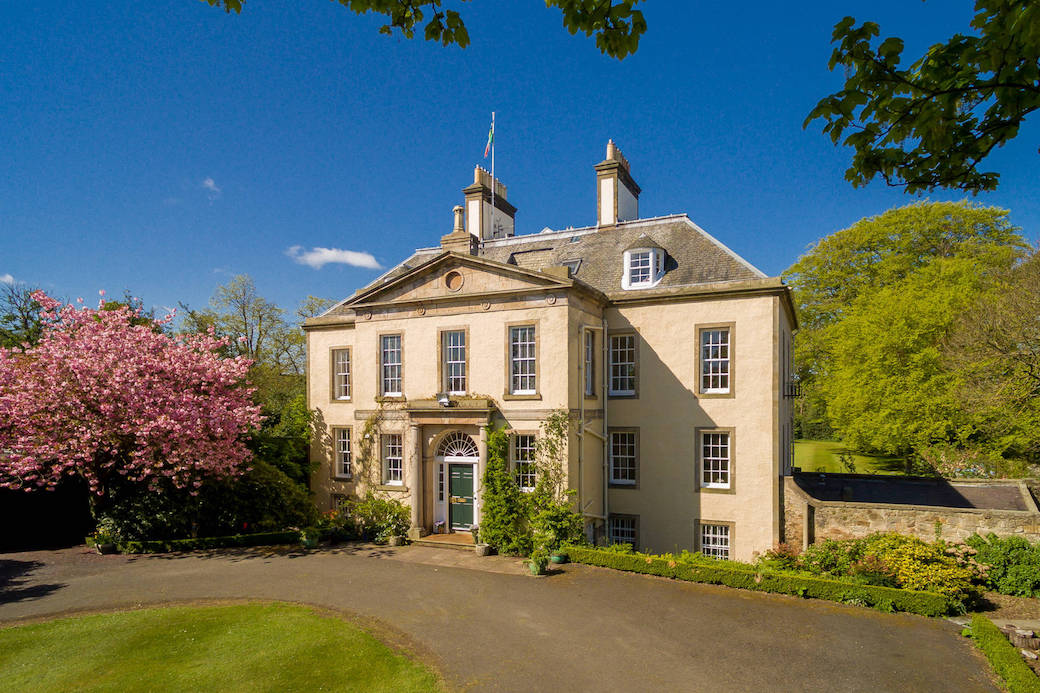 The current owner, John McAreavey, bought the house in 1998 as a family home. As he says: “I fell in love with Drylaw House as soon as I saw it 20 years ago. It is such a beautiful property and a complete hidden gem, tucked out of view at the top of a long, tree-lined drive, that most people don’t even know it exists.” 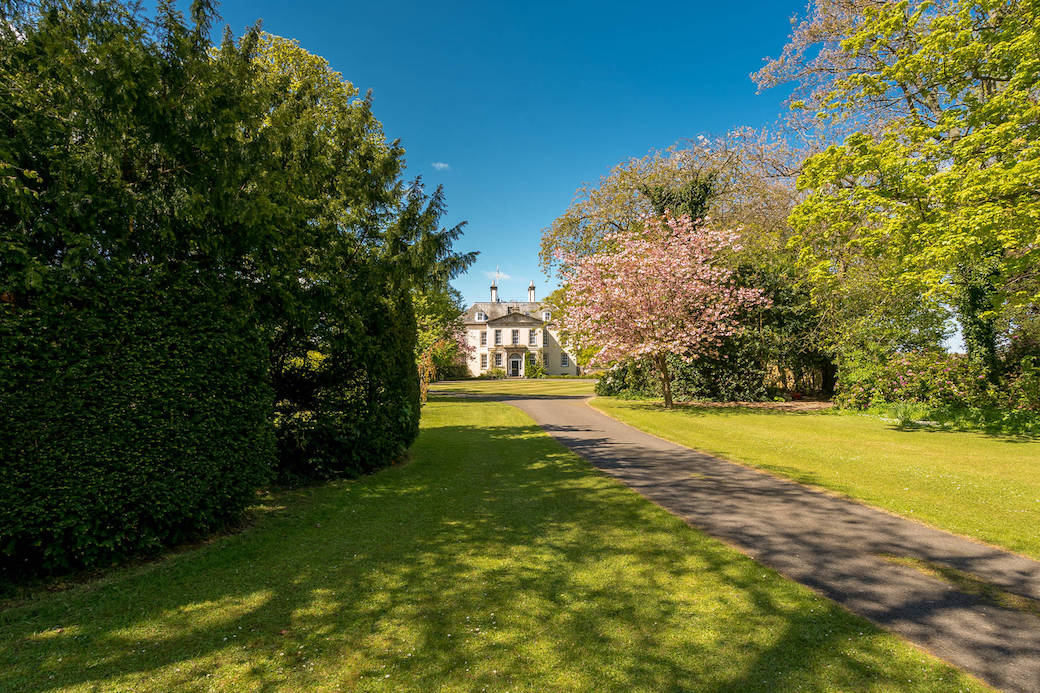 It’s easy when you’re looking round a property like this to be so overwhelmed by the scale that you almost forget to notice the detail, but Drylaw is different: you can’t help but notice the detail. Consider the stone staircase with its intricate balustrade that features a series of heads decorated with leaves. I haven’t seen balustrade detailing like this before, and this entrance sets the tone for the distinctive period features to follow. 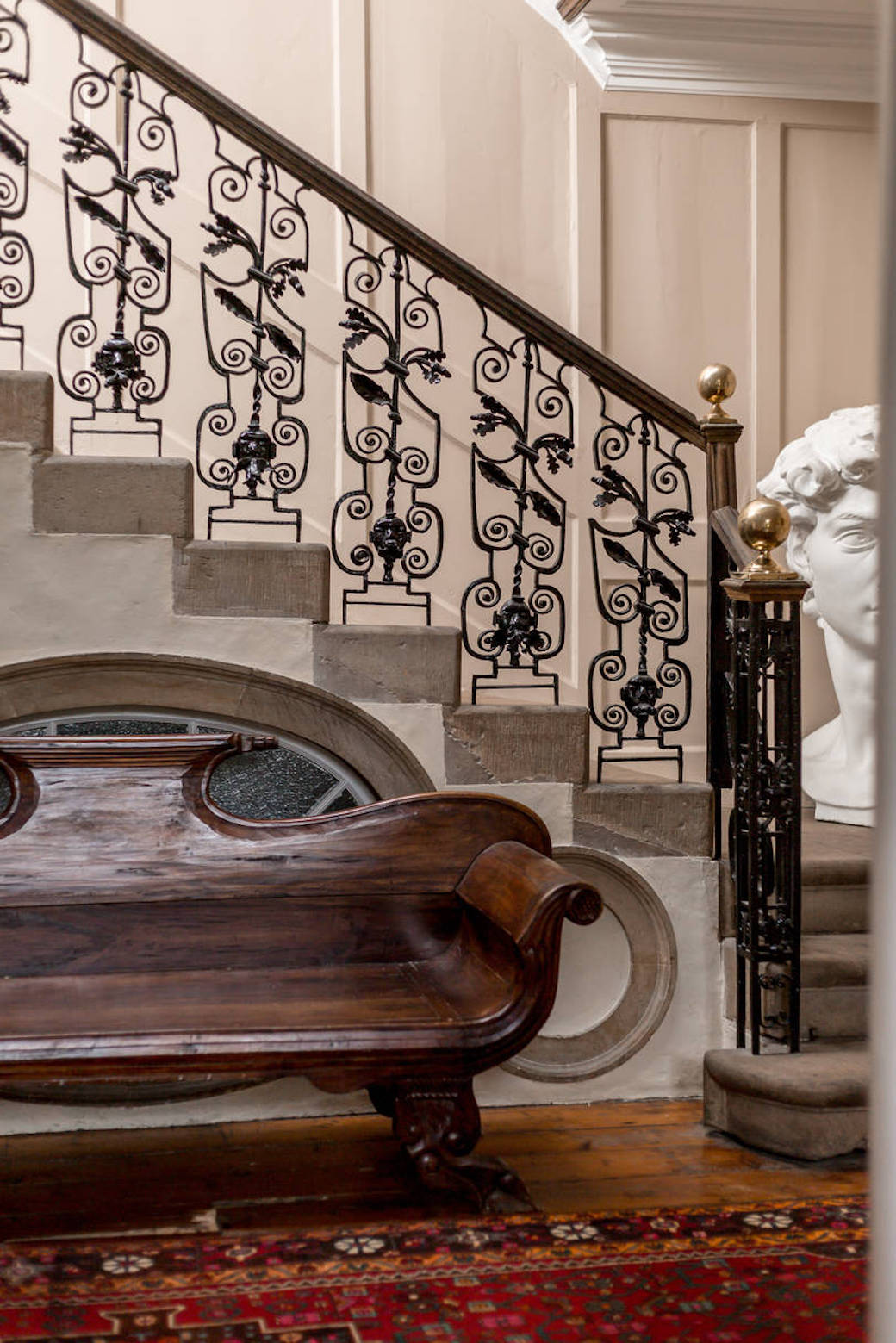 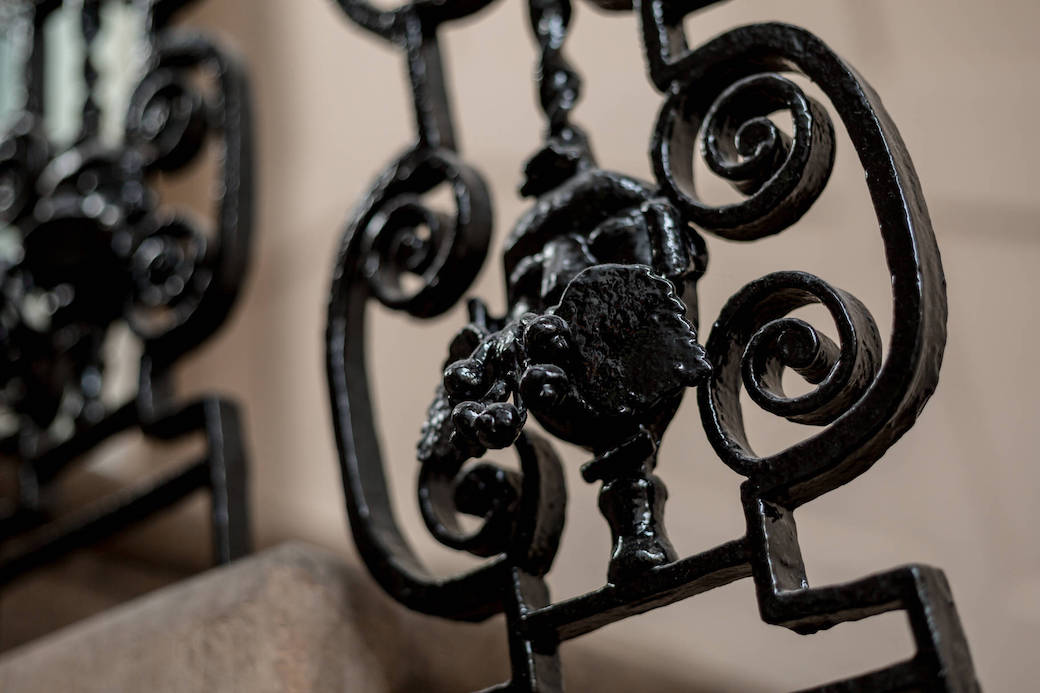 Meanwhile the staircase is lit by a cupola high above – McAreavey believes this was a 19th century addition, and it pulls light deep into the house. The subtly changing tones as you move upstairs, as the light plays moodily on the panelled walls and the stone stairs and oak balustrade, offers an atmospheric introduction to the rooms beyond. 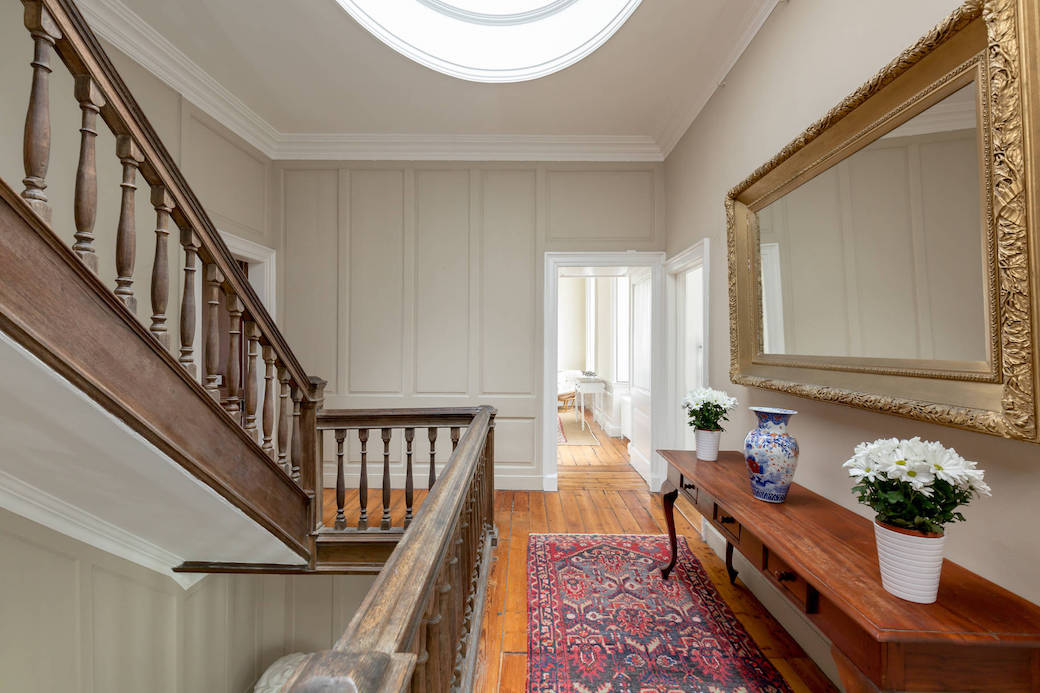 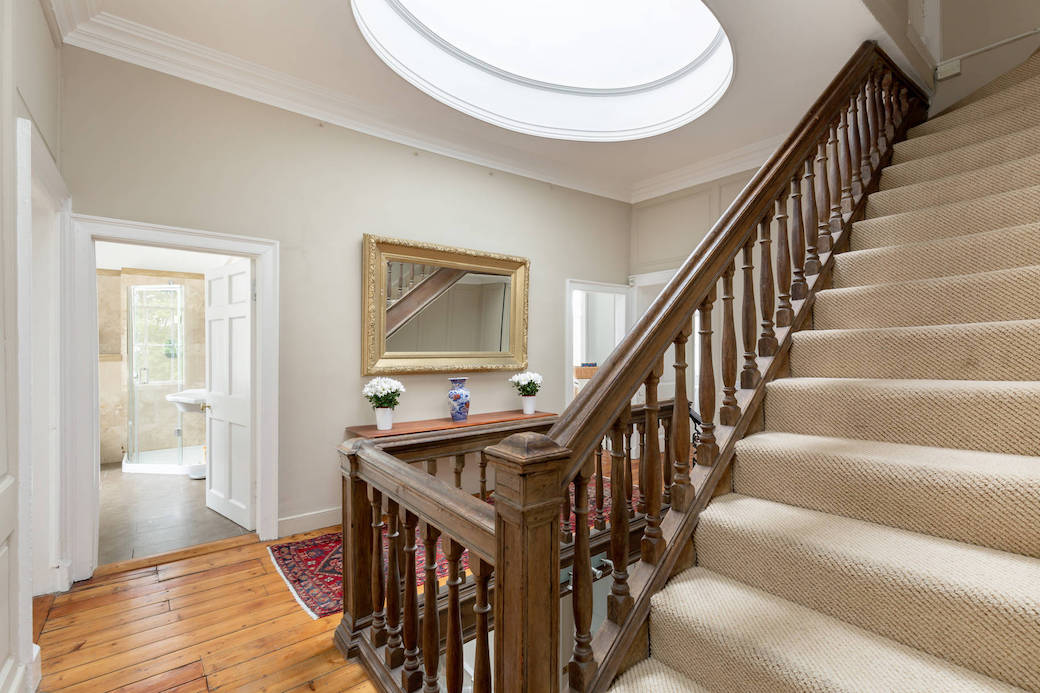 For me, the wood panelling alone makes this interior feel special, and it seems quite remarkable that this feature has survived the last three centuries – and in particular the decorative trends of the 20th century that might have seen panelled walls like these stripped out. The panelling grants this interior a softness and warmth that you might not anticipate from a house of this scale.

Likewise, the tall windows are framed by original working shutters. The drawing room illustrates this particularly well as it has windows on three sides that bathe the space with light. 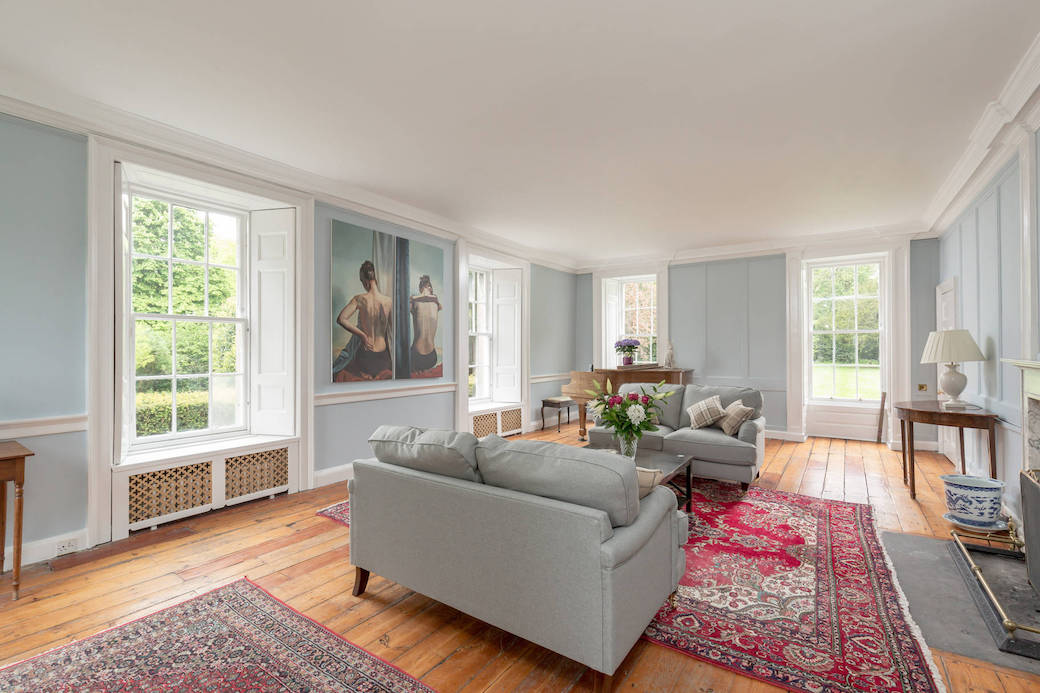 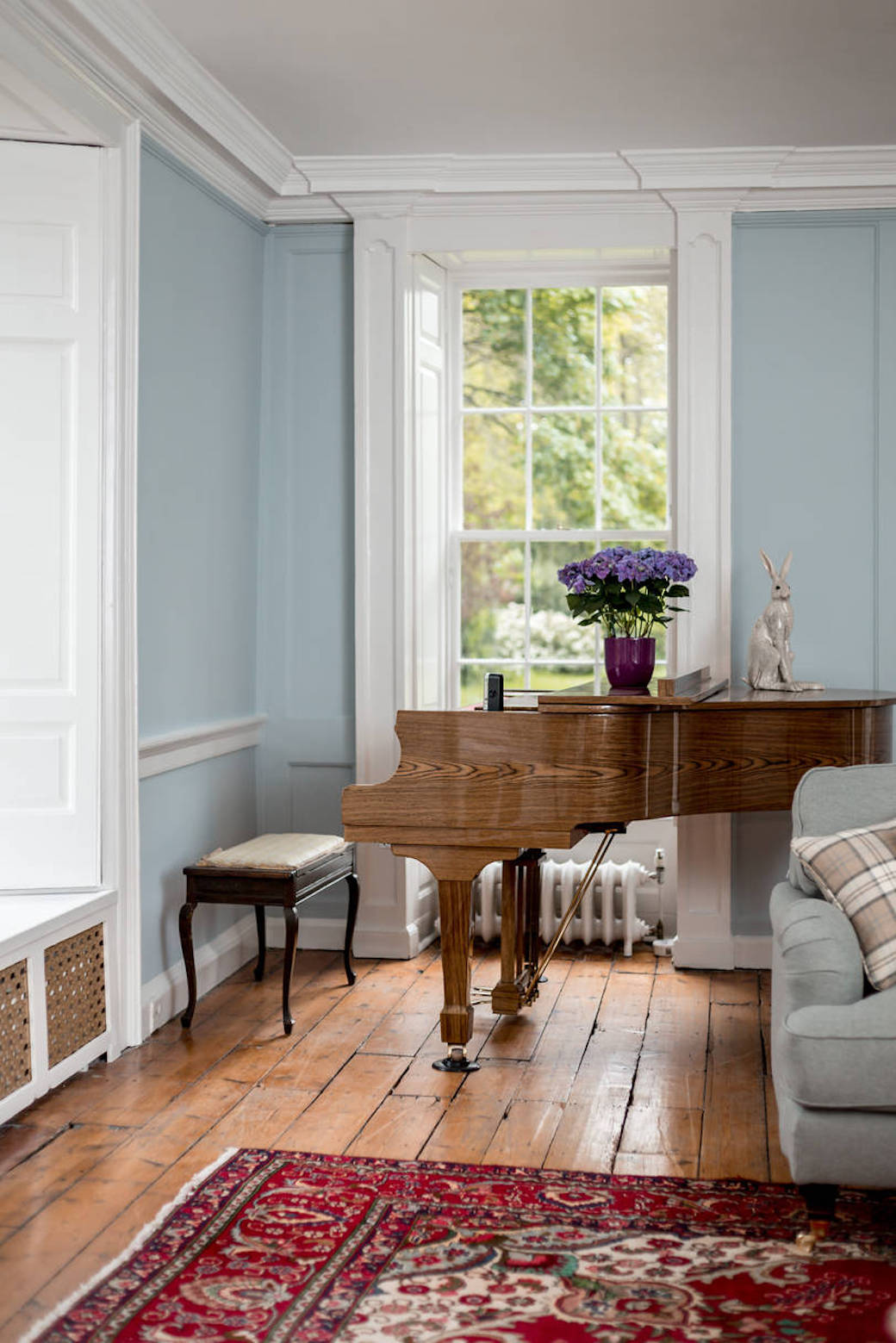 The period detailing is also restrained – it’s quiet and elegant, as you would expect from what was once a country house. The dining room is certainly more elaborate, but elsewhere the detailing has a simplicity that works well alongside contemporary furnishings and lighting.

This drawing room also features one of three frescos, which are particularly rare finds in a residential property. 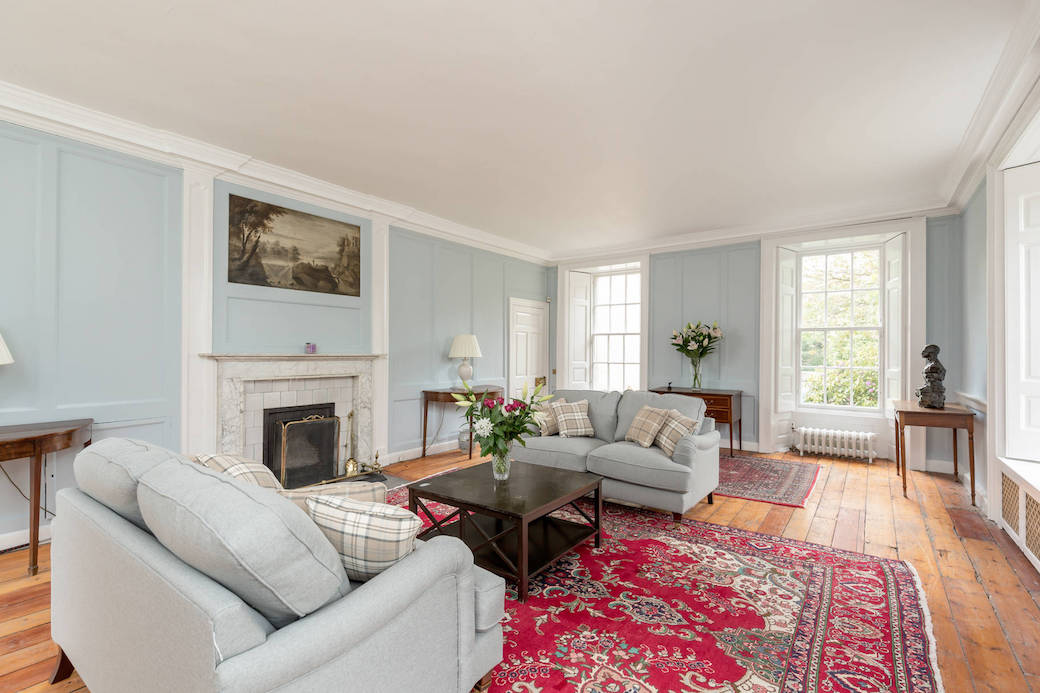 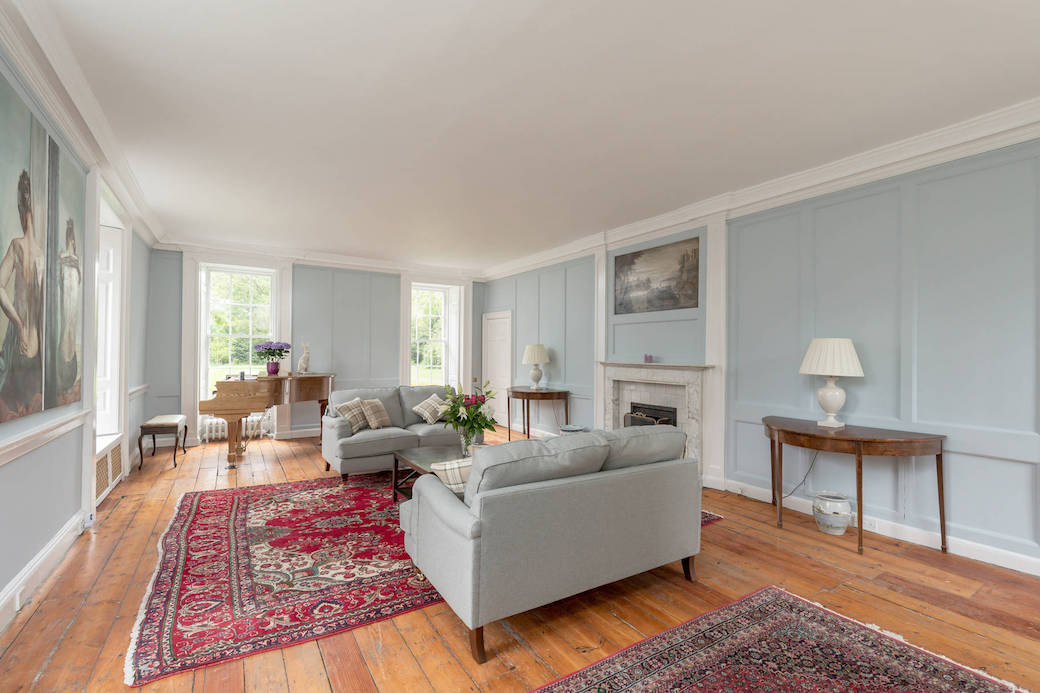 The fresco above the marble fireplace in the dining room is credited to the French artist William Delacour, who lived in Edinburgh in the mid-18th century, and it’s a beautiful addition to this room with its combination of panelling and more ornate plaster detailing. There’s also a secret cupboard here, concealed within the panelling, and it’s one of those quirky touches that makes an old house like this such a pleasure to explore. 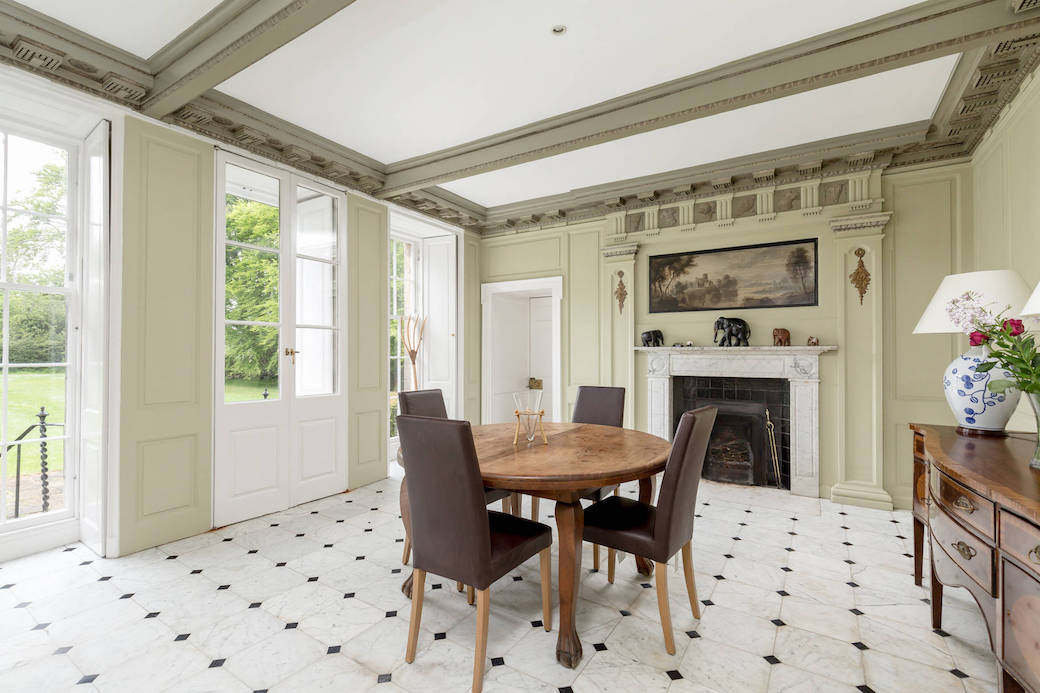 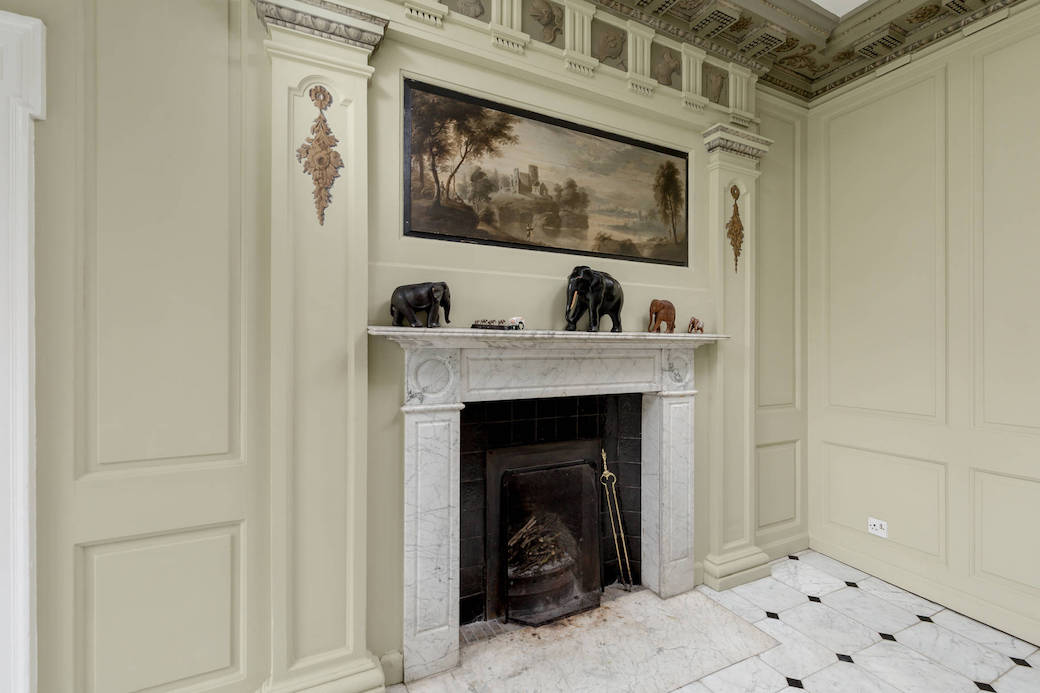 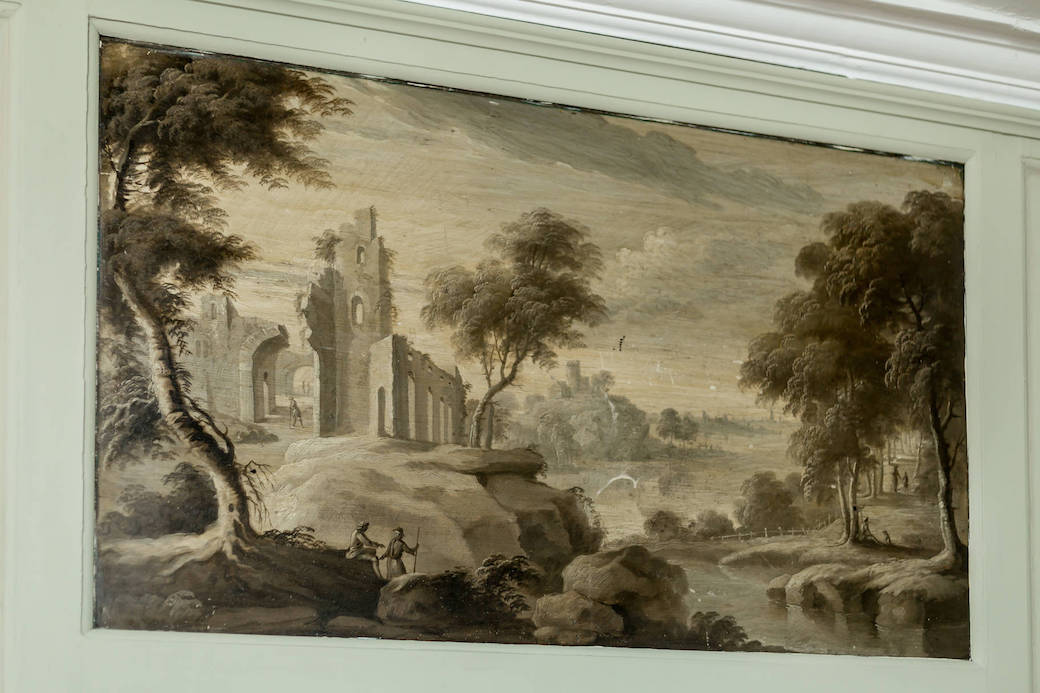 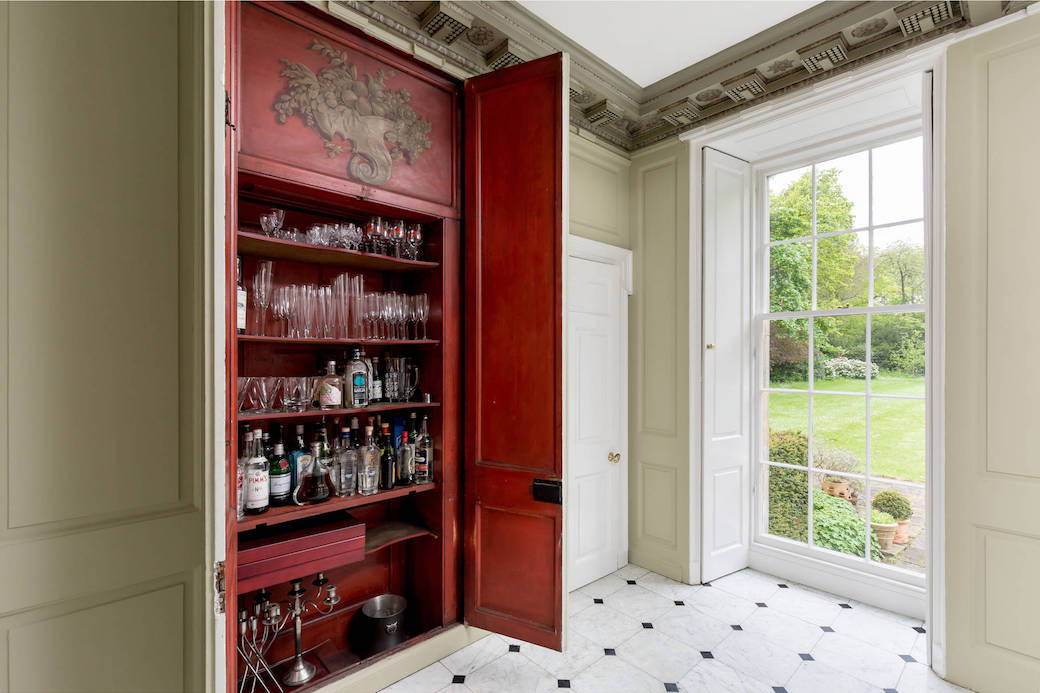 French doors open from this room onto the rear garden, which is such a green and tranquil spot. It really is hard to believe that Edinburgh lies just beyond these grounds. I wandered out here with Harris and took a few photos of him in the garden, and I was reminded again of how peaceful this place is.

And just look at the back of this house! Perfectly symmetrical, perfectly balanced – a fine example of early Georgian architecture. 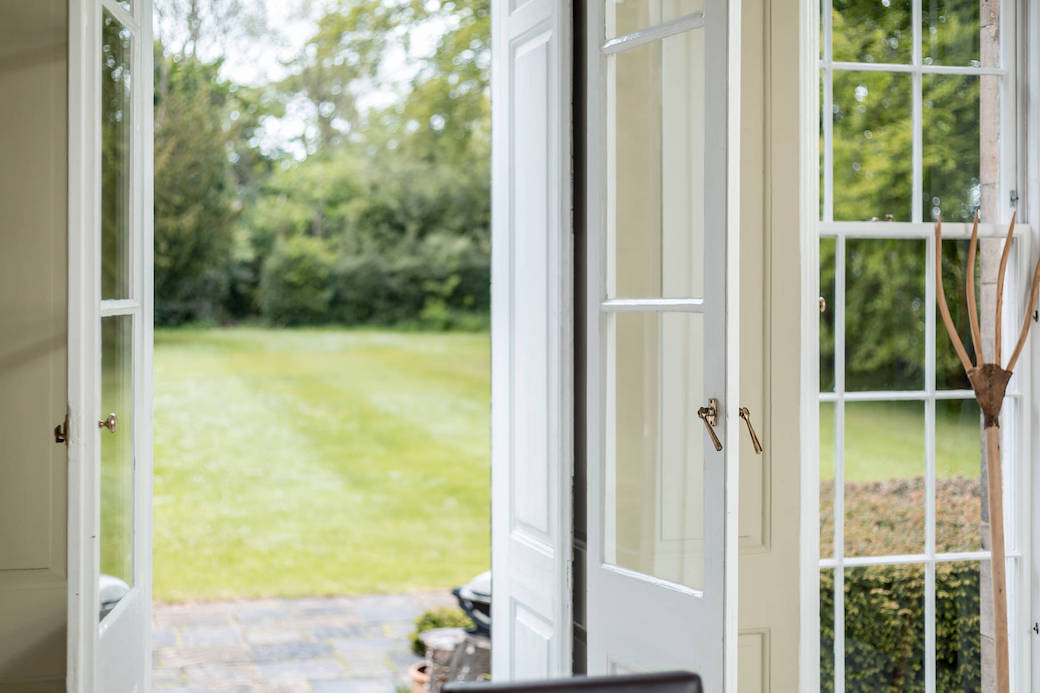 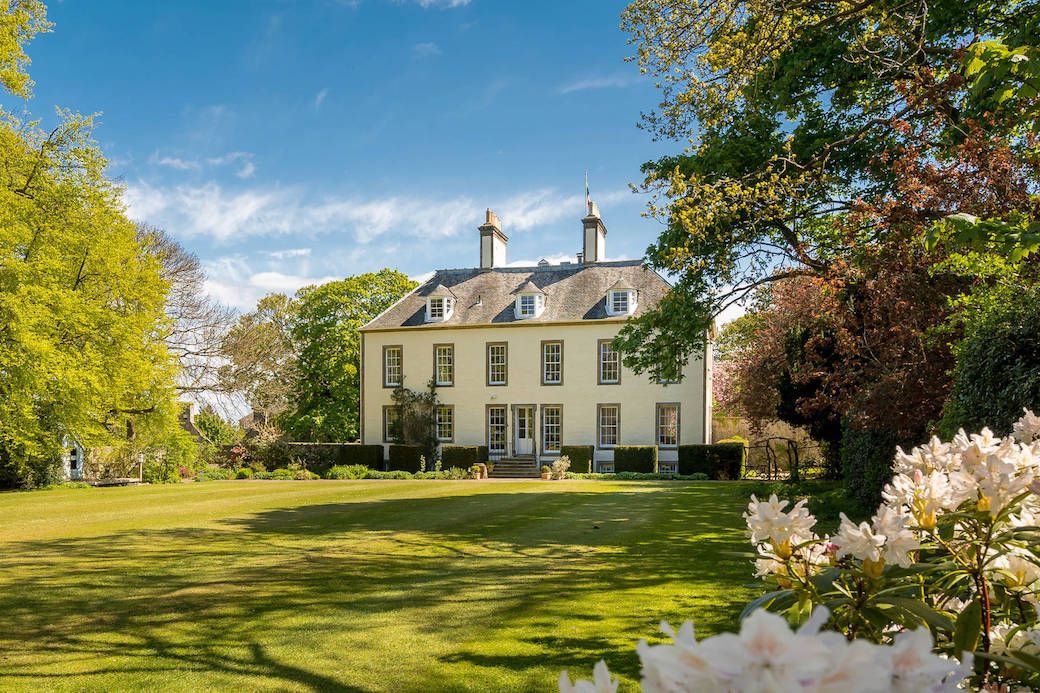 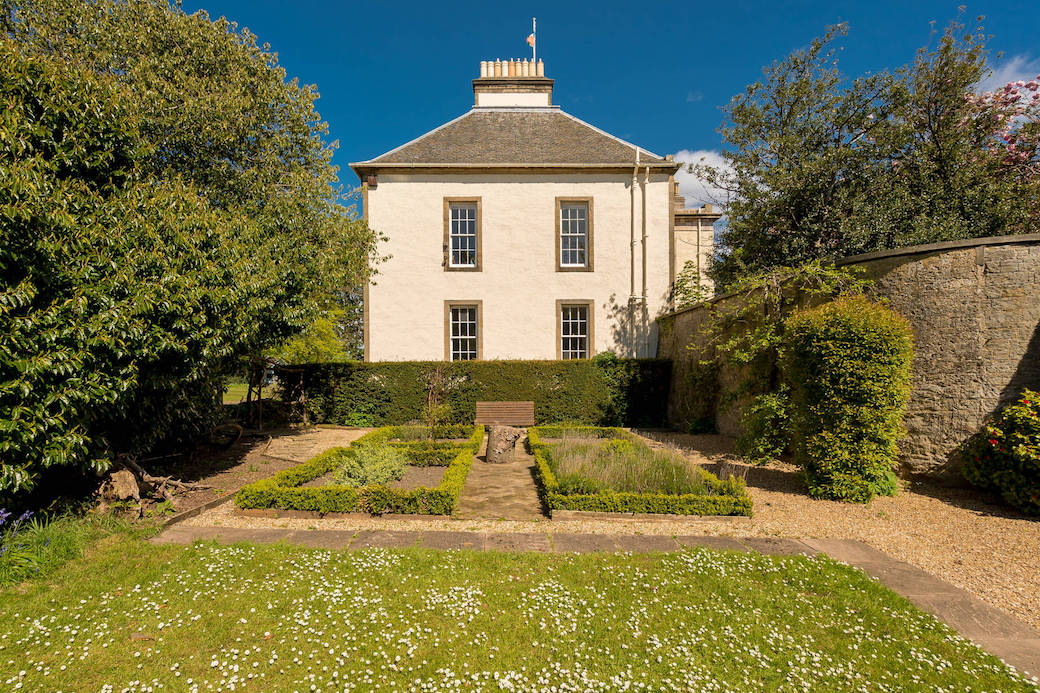 There’s also an informal sitting room on the ground floor, and a good-sized kitchen with an AGA. Again, this room has timber panelled walls and working shutters, and the Shaker-style cabinetry is a sympathetic addition here. The historic interior of this house has been retained by McAreavey as it was when he and his family moved in, but the kitchen and bathrooms have been upgraded for modern family living. 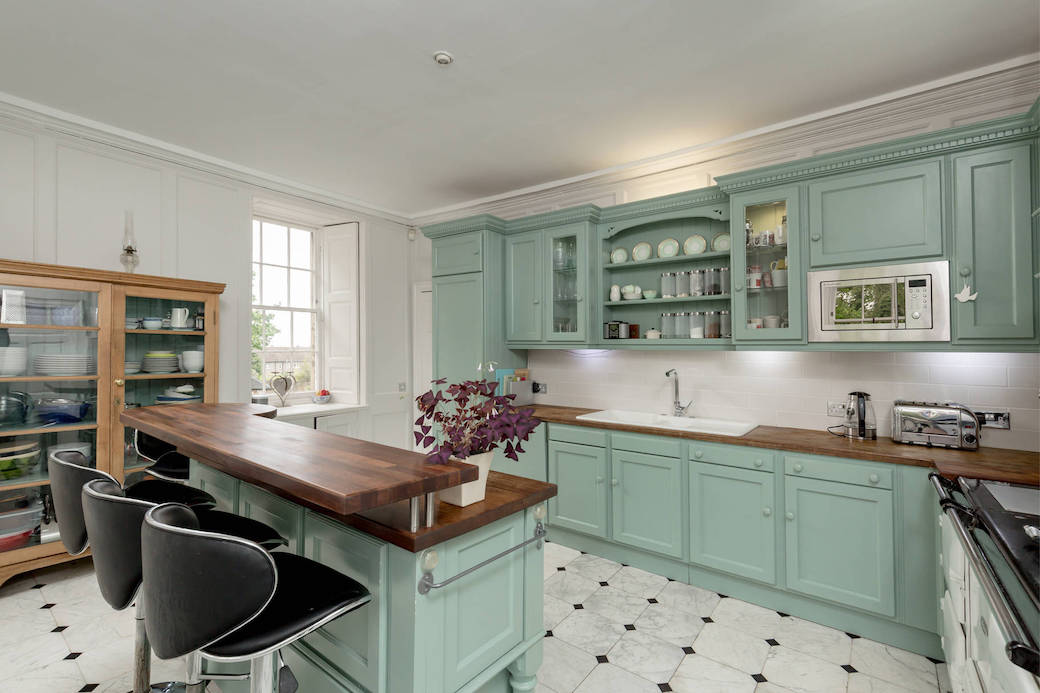 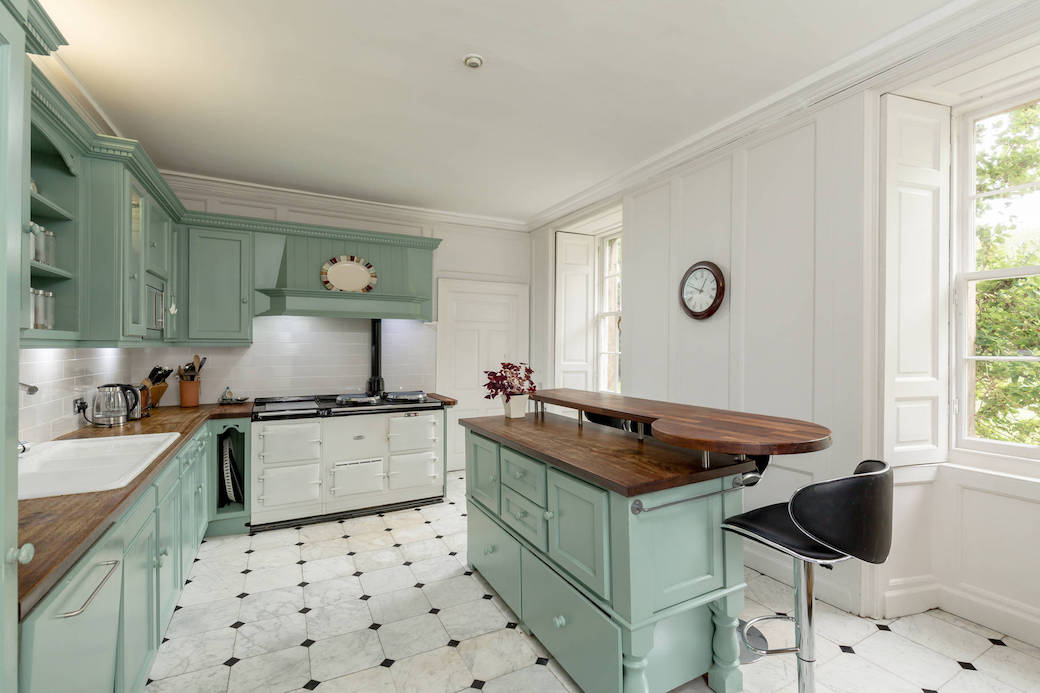 The main bedrooms are spread across the first and second floors – bearing in mind that there are additional bedrooms in the basement level – and one large room on the top floor has been used as a studio and work space. One of the most striking rooms in the house is on the first floor where you’ll find a study lined in its original oak panelling, including oak window seats and shutters, creating a wonderful warm patina. 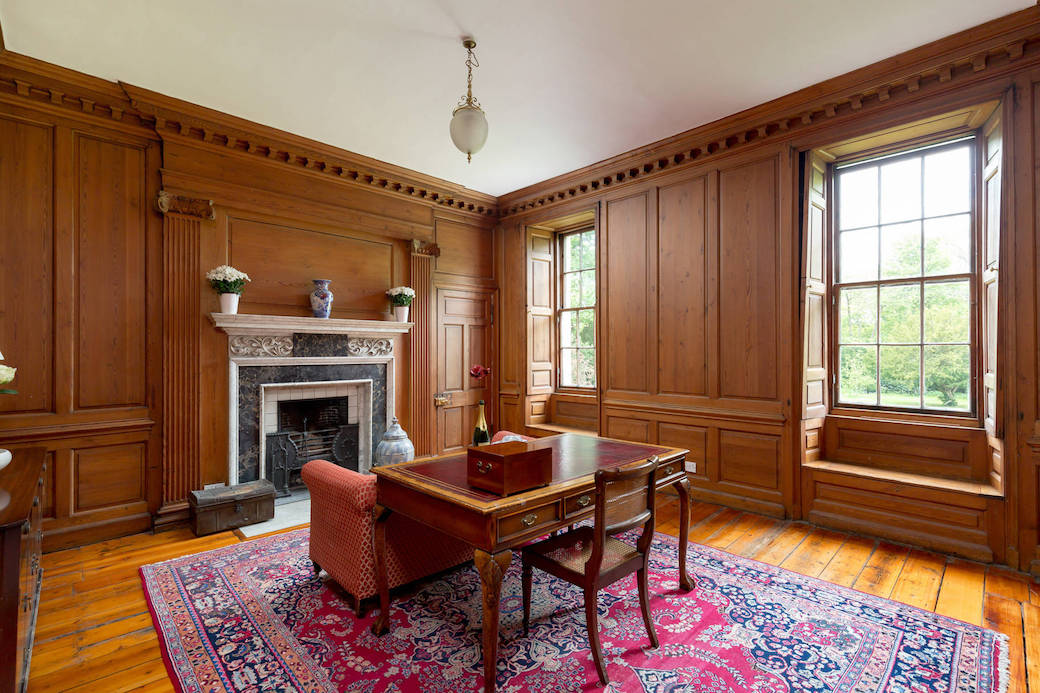 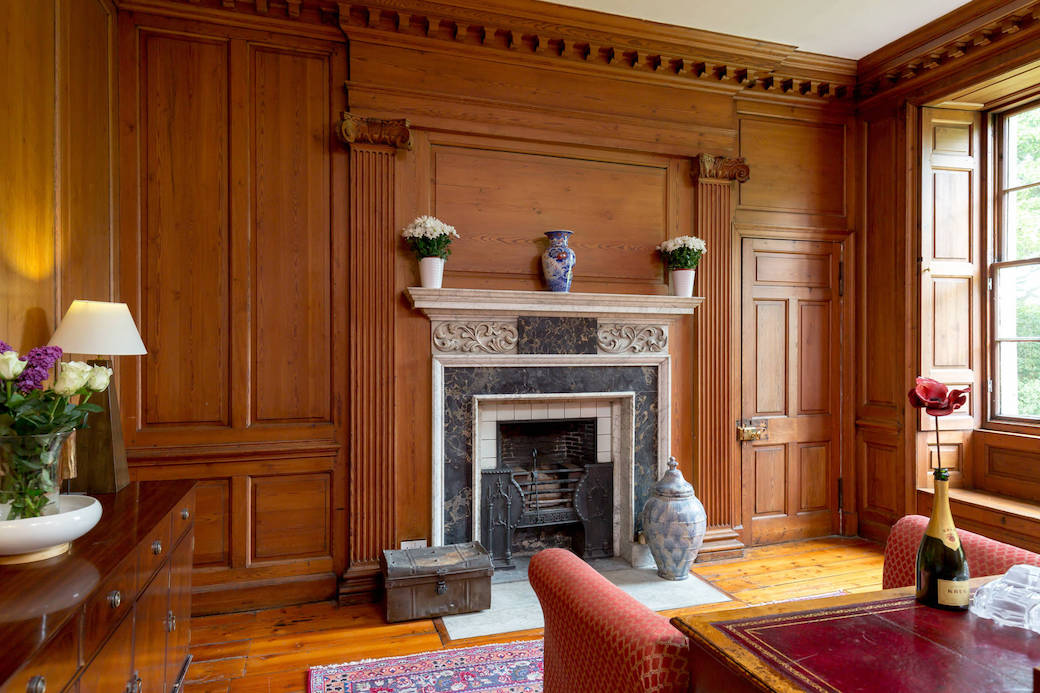 I think it’s fair to say that Drylaw House will appeal to someone who not only appreciates historic architecture, but who loves it. Who is perhaps looking for an architectural gem and will be excited by the possibility of working with an old house filled with period features. Who will be willing to work with the features, rather than against them. And someone who likes the idea of feeling as if they’re living in the country, but wants the amenities of an urban lifestyle. 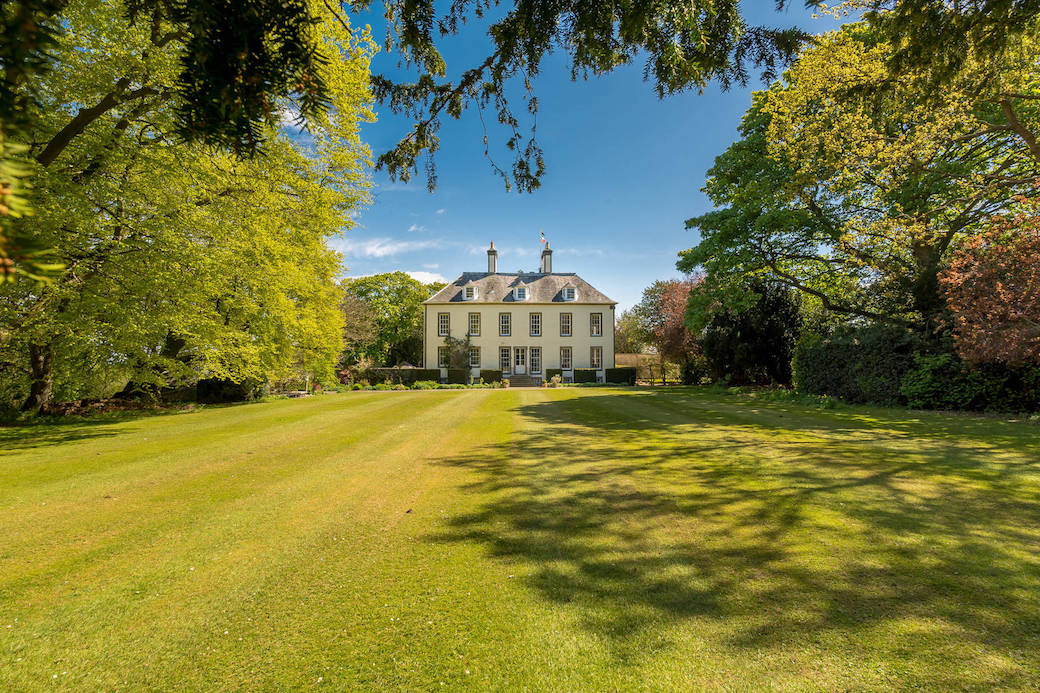 This is certainly one of the most special and memorable properties I’ve seen of late. Photos can only tell you so much. There’s just something about what it feels to be here, wandering around the gardens as I did with Harris on a rainy day, enjoying the quiet, or walking into the drawing room and finding this lovely light flooding in, or heading up the staircase and sensing the age of the old stone stairs below your feet. It’s a cliché to say it, I know, but you don’t see properties like this coming on the market very often.

Drylaw House is listed with Coulters.