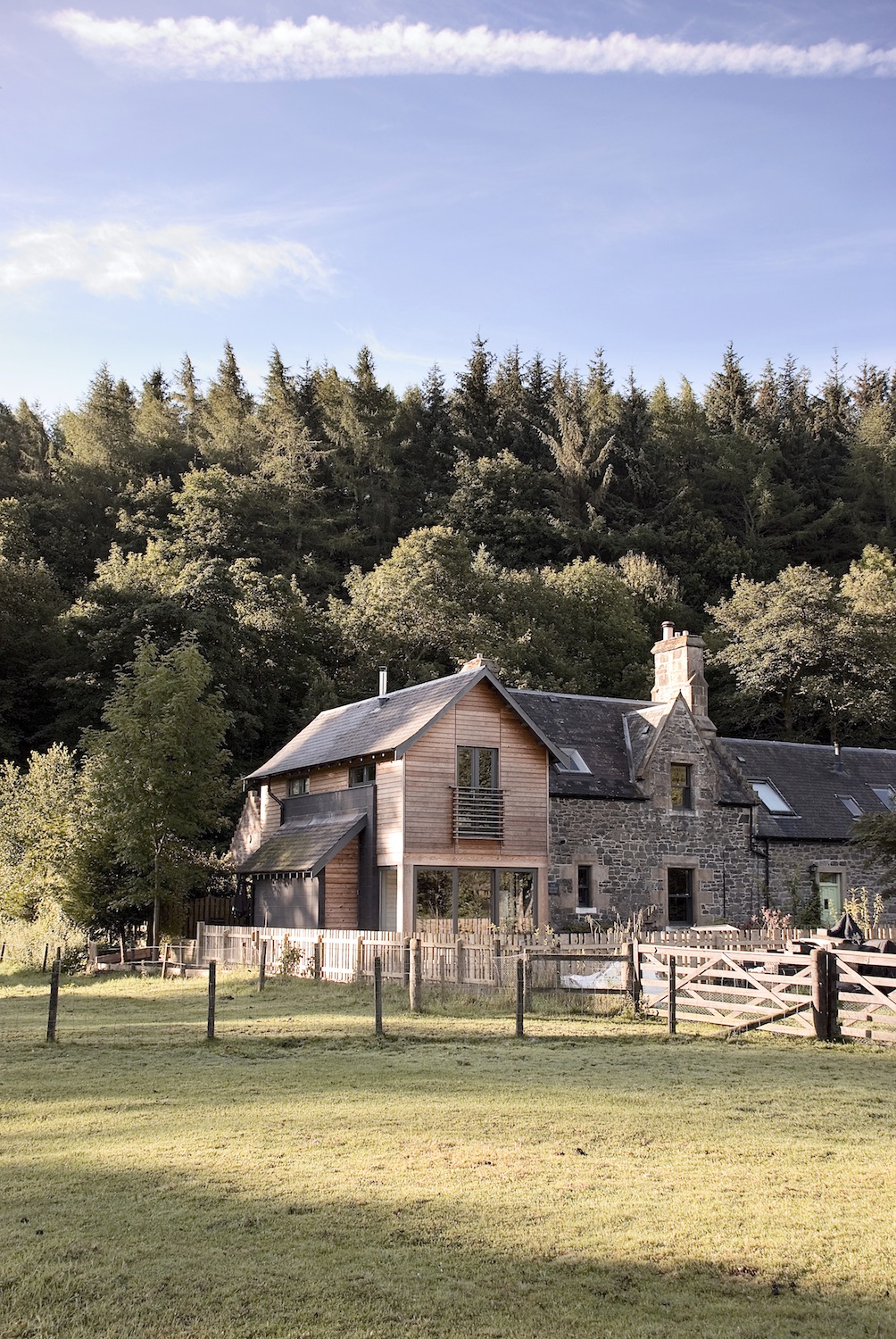 After a week away, it’s great to come back to the Files with a striking looking property and, I have to admit, I was sold on The Corner House the minute I laid eyes on it. There’s just something about that combination of a characterful old building with a sympathetic and contemporary extension – that merging of old and new – that feels interesting and exciting when it’s done well. 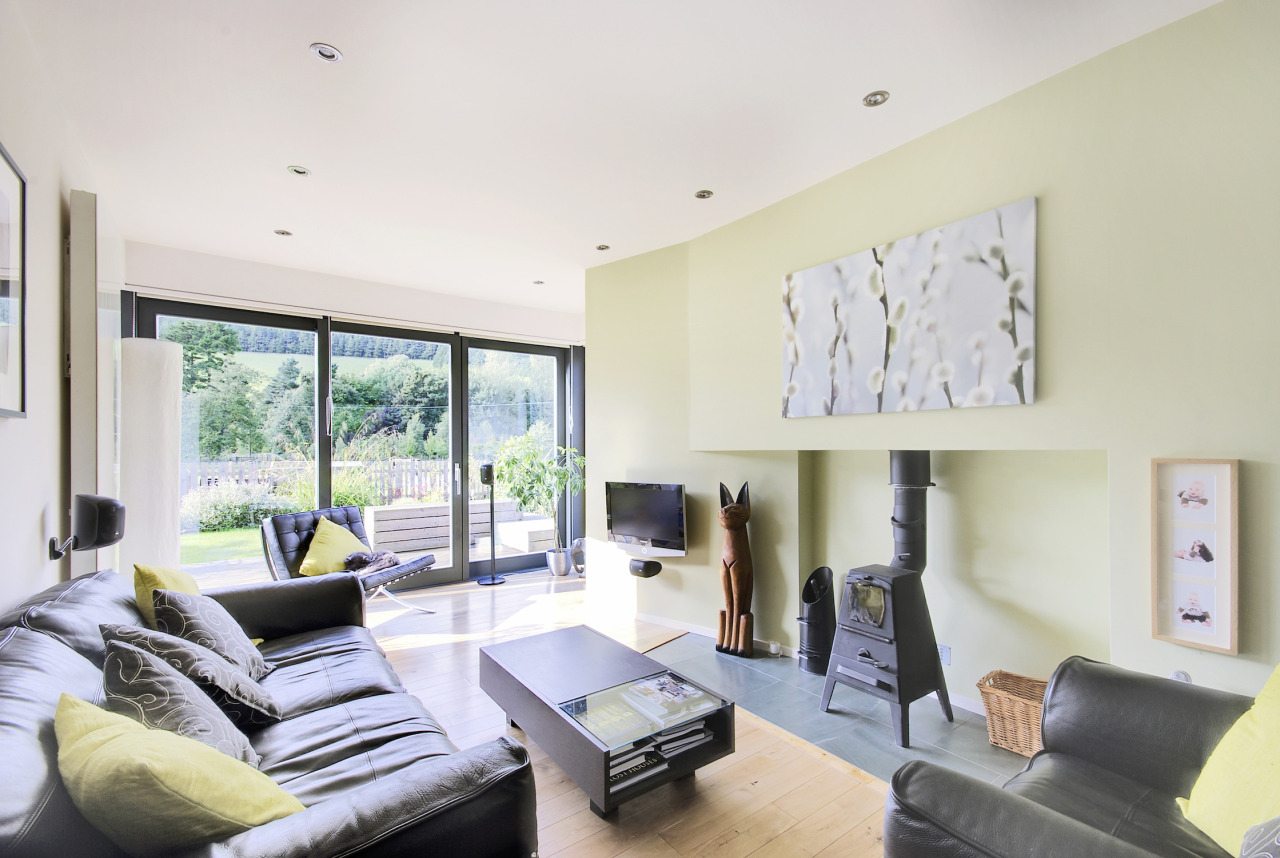 The Corner House sits within the grounds of Borthwick Hall at Heriot in Midlothian and was designed by architects Chris and Jenny Humphreys, who bought the property back in 2002. Chris and Jenny came to the process from different backgrounds: Chris works with Comprehensive Design Architects and has experience primarily in commercial projects, and he also has his own company, Chris Humphreys Photography, specializing in architectural and interior photography – Chris took the photos featured here – while Jenny is a partner with the renowned conservation specialists Simpson & Brown Architects. 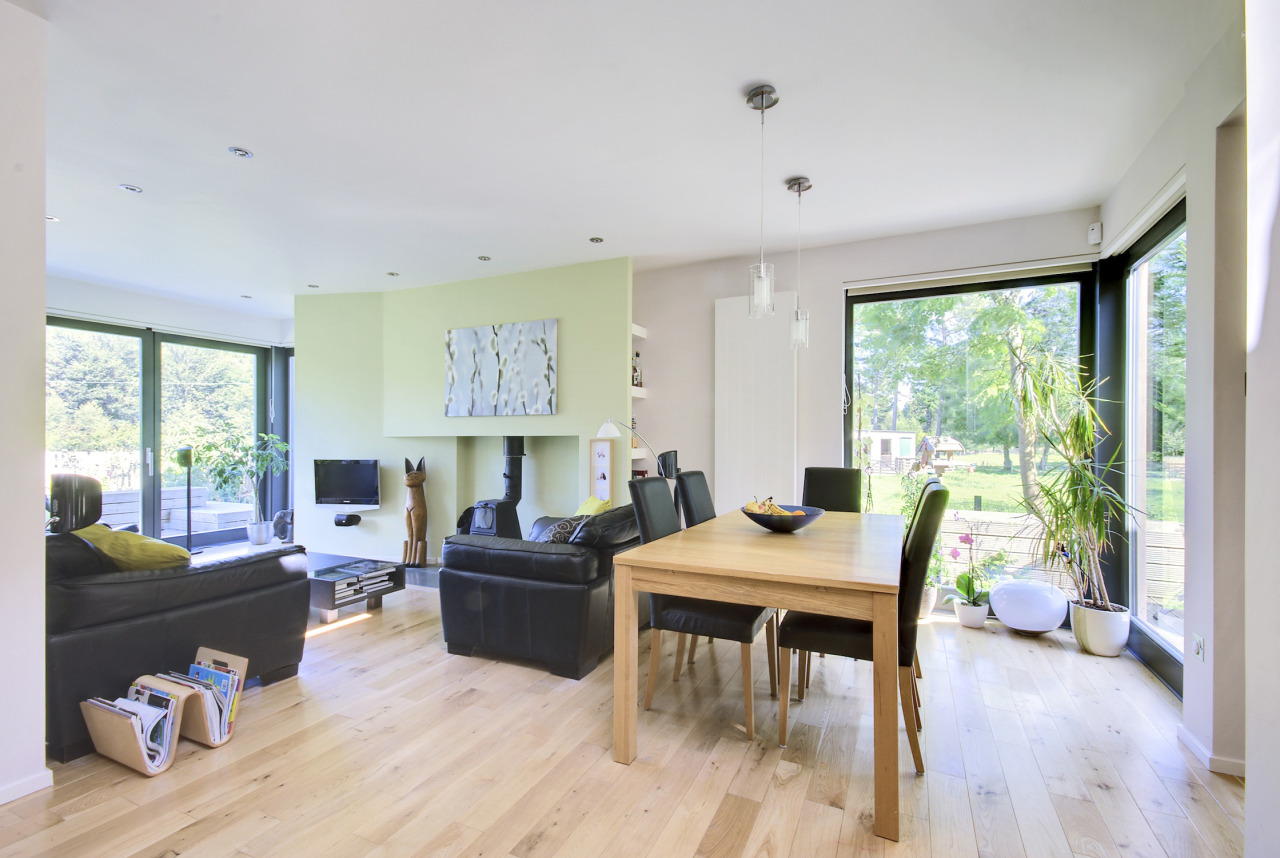 Needless to say, perhaps, the house they bought looked very different. “When we found this house it was a small two bedroom cottage, and it had been on the market for about a year at that time,” Chris recalls. Although too small for their needs, Chris and Jenny saw potential. “The previous owners had already secured planning permission for an extension to the existing property, and that started us thinking about designing our extension,” Chris says. “We loved the rural setting and the fact that it’s close to Edinburgh.” 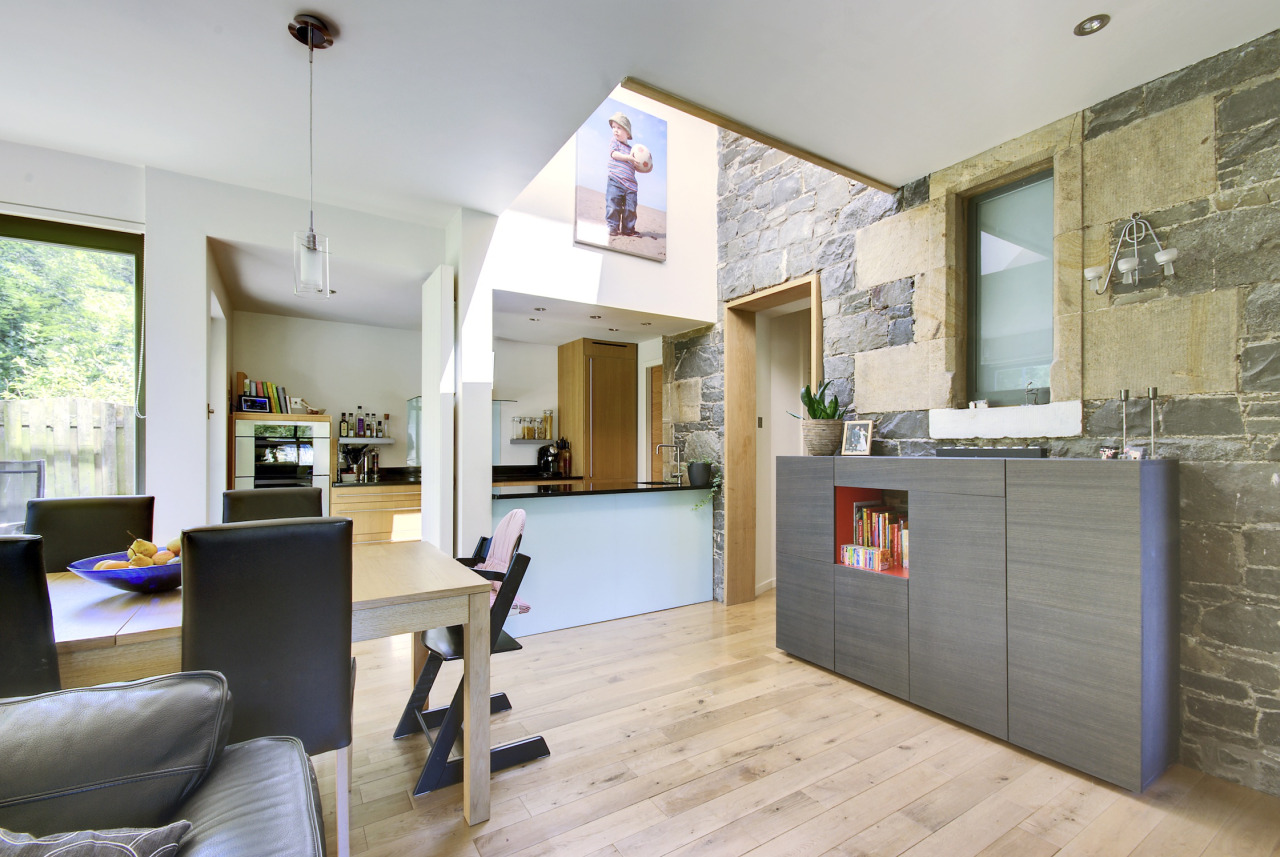 The Corner House was originally the groom’s cottage for the stables for Borthwick Hall. As its name suggests, the house sits on the corner of a range of outbuildings surrounding a courtyard. “It was about creating something distinct,” Chris says of the extension, which has effectively doubled the size of the original house. “My view is, if you’re going to extend, you need to extend to a meaningful amount. We wanted to retain the existing configuration and features of the house, but create something totally new and unique.”

Key to this was the choice of materials, including blue-grey toned fired clay blocks and reclaimed Welsh slate, which was chosen to match the existing slate, along with larch wood, which has weathered over time to complement the stone. As Chris says: “The clay blocks have a masonry feel but are a contemporary alternative to a natural stone wall.

“One of the key drivers in the design was the sun path and bringing light into the house,” he explains. “The original cottage had a living room window facing north, and another window facing the courtyard at the back along with the bedroom windows upstairs, so there wasn’t a lot of light coming into the property. We were keen to get as much glazing as possible facing south, west and east, to get light at different times of the day.” 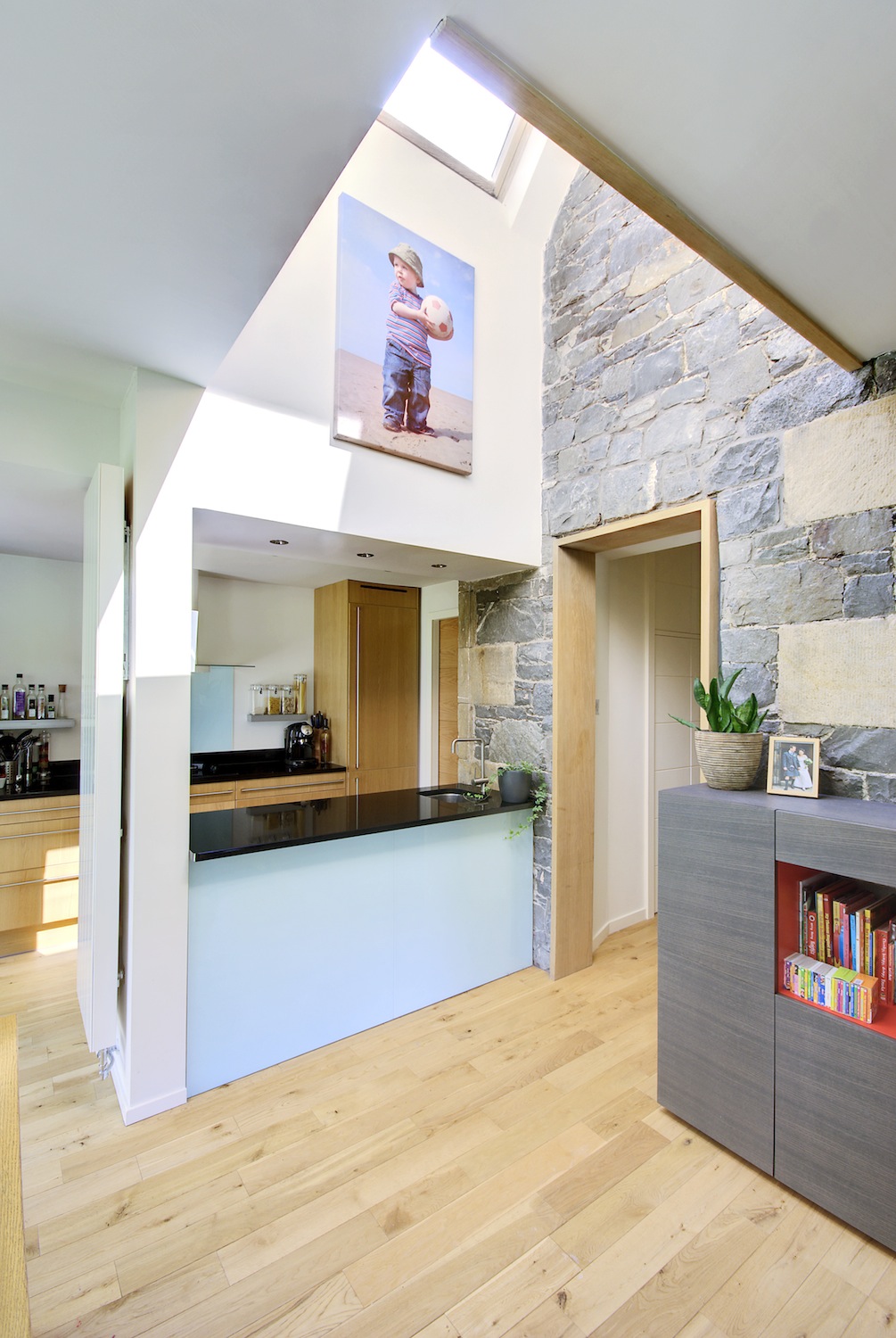 It was also important to create a flow between the old and the new elements. “It had to feel like a whole house, so we created three slappings through the two-foot-thick stone gable wall. It means that the original corridor into the house carries straight into the extension, and we carried the solid oak floor right the way through and renewed all the internal doors so that the architectural language is consistent throughout.”

The new part of the house is just stunning. On the ground floor you’ll find an open plan living and dining room that in turn leads into the kitchen. Glass doors open onto a terrace from the living area, and the extensive glazing here pulls in the views over the garden and the neighbouring paddocks, while a further glazed section at the dining and kitchen end of the space retains this inside-outside connection. “We always envisaged that having this dining, kitchen and living space in one area would be a really good way to live,” Chris says, and it has been. 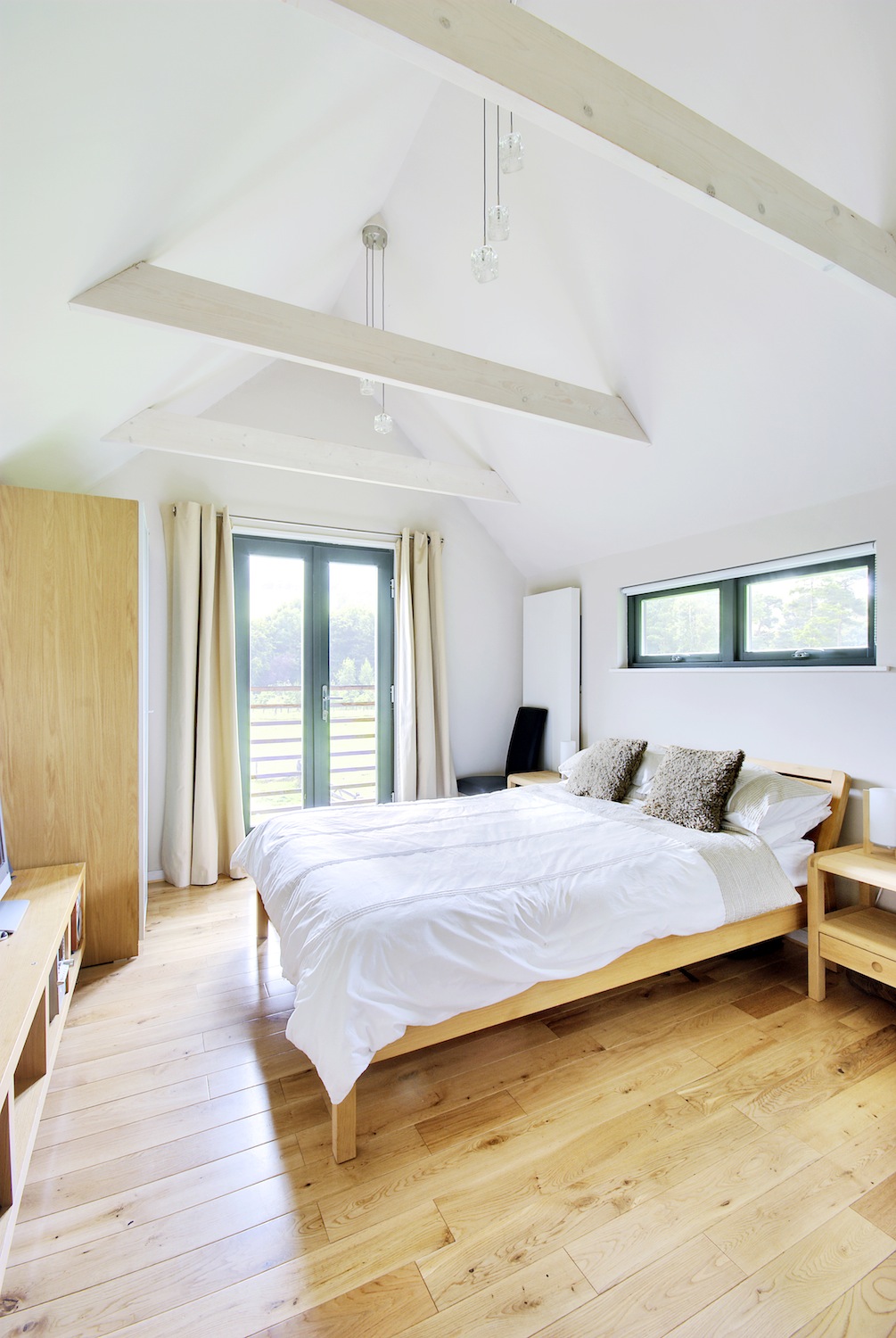 As well as the bedroom and bathroom in the existing part of the house, there are two more bedrooms within the extension including the vaulted master bedroom with its exposed roof beams and with doors opening onto a balcony. I particularly like the way that the glazed balustrade on the landing has been used to create a visual connection between the two floors – you can look down from here into the dining area below.

And there are great moments where old meets new: in the dining area and kitchen, for example, where the exposed stone wall of the original house creates a tactile contrast against the crisp internal detailing of this new section. 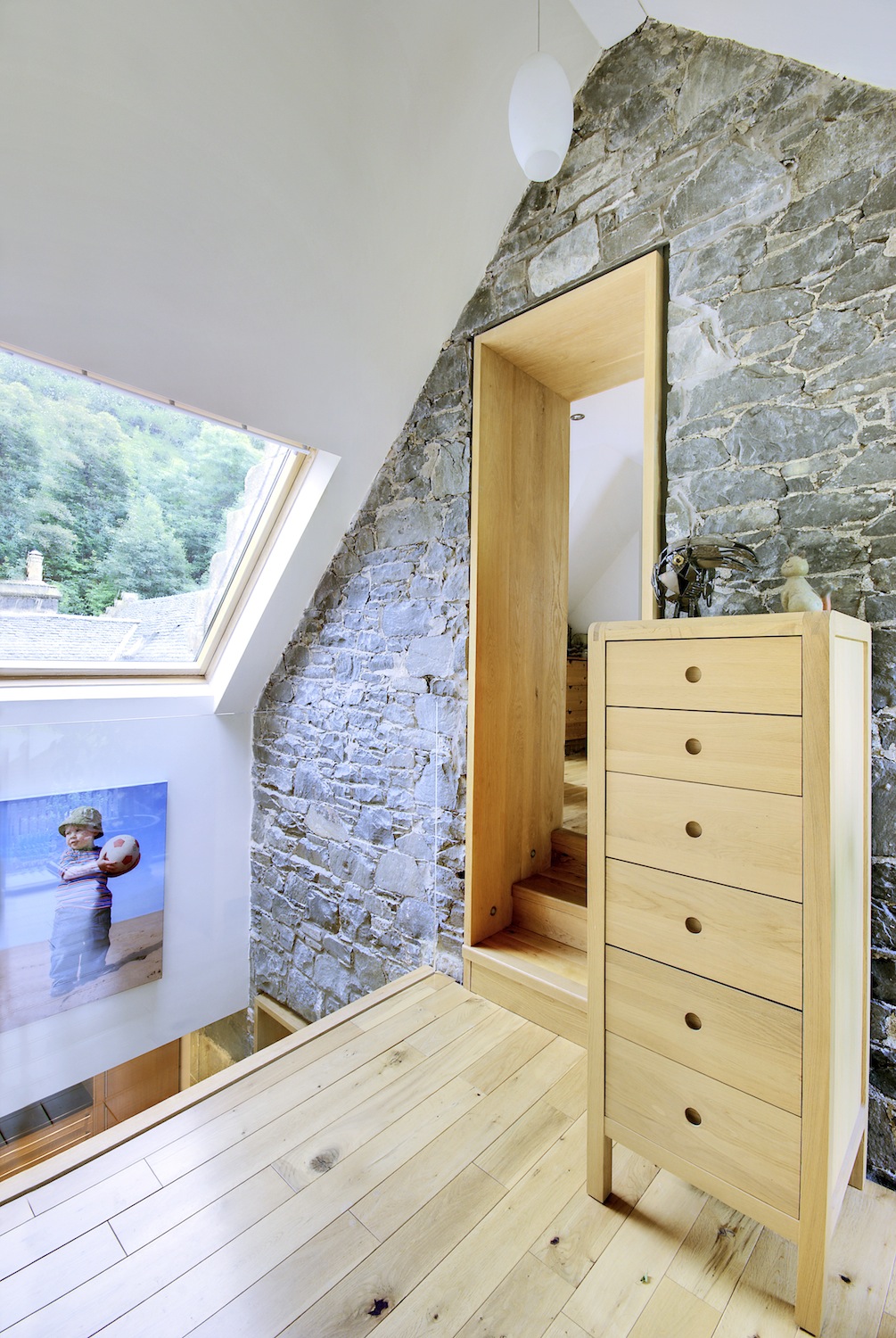 I’m always amazed when interviewing people who have tackled a substantial project to hear that they’ve lived in the house throughout, camping out in one room and washing their dinner dishes in the bathtub. And sure enough, Chris and Jenny did the same here, using the former living room (now a family room or fourth bedroom) as a kitchen, bedroom and living space during the build, which they began in 2005 and completed a year later. 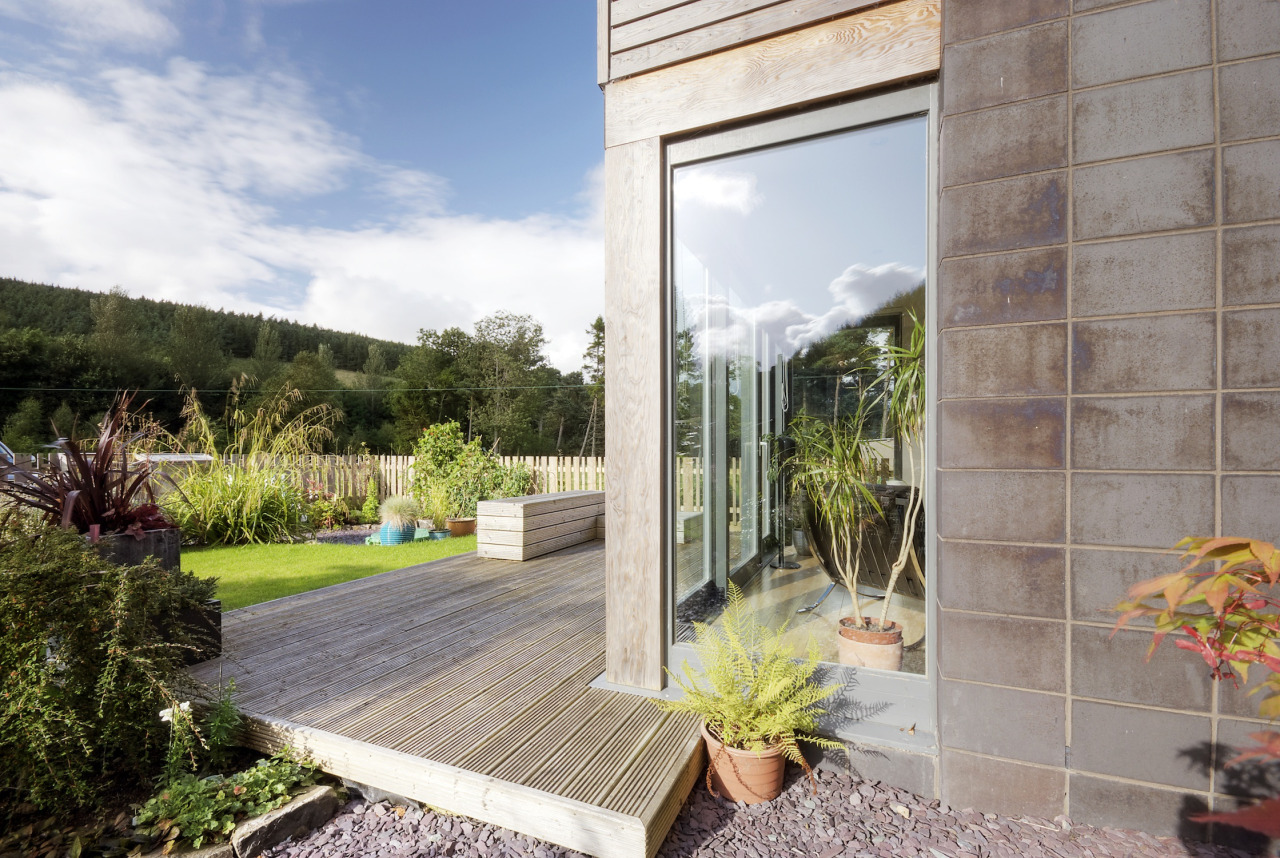 “Initially we asked the main contractor to project manage but then in the latter months I project managed myself,” Chris says. “It was tough as we were both working long hours. Sometimes it was a case of sticking post-it notes onto beams and columns with instructions for the contractor. Looking back, it was an emotional process.”

Yet the end result is an individual home where every single detail has been considered both in terms of function and aesthetics. Once again, it’s a house I could imagine living in and never growing tired of. For the next owners, The Corner House will be a fantastic find. 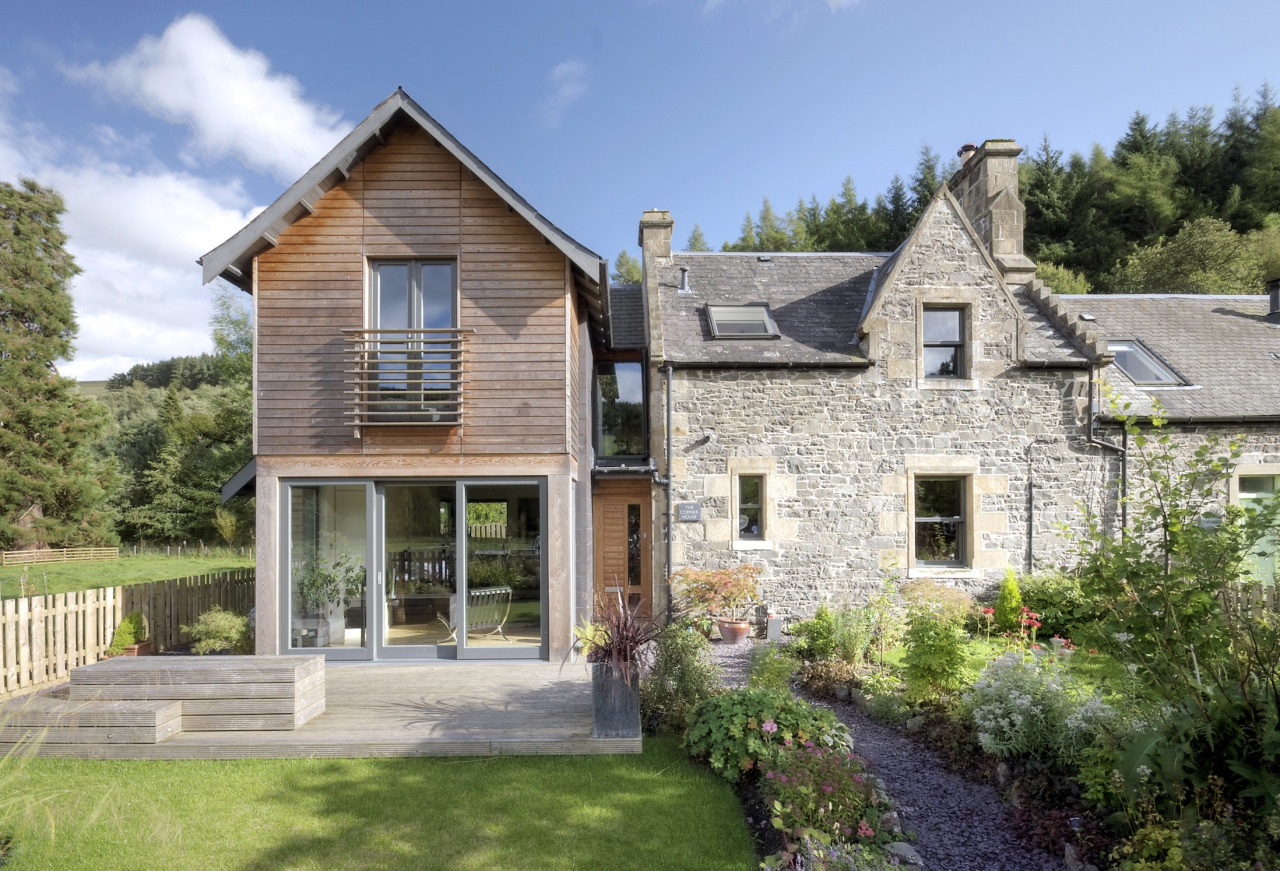 The Corner House was marketed by CKD Galbraith.