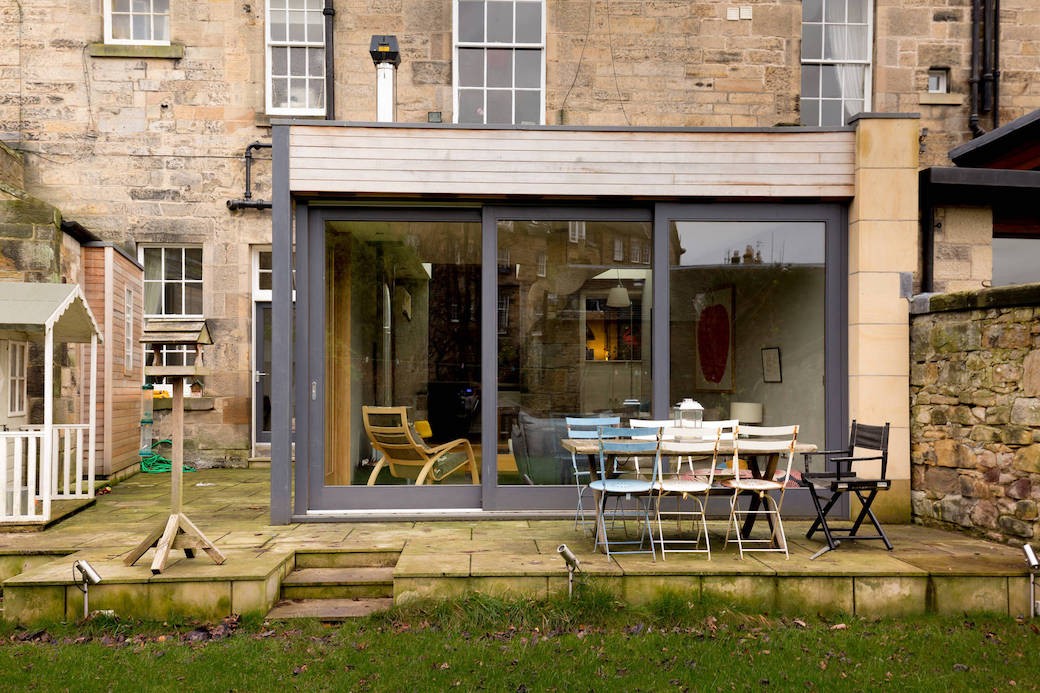 When the estate agent Simpson & Marwick sent me the link to Square Foot Media‘s photography of this Edinburgh apartment, I knew that I wanted to feature this property as soon as I opened the photos of the garden room extension. Situated at the rear of this ground and garden level flat in Clarendon Crescent in the city’s West End, the rest of the property is also impressive – particularly when considering the drawing room on the ground level with its handsome Georgian features or the scale of the master bedroom. 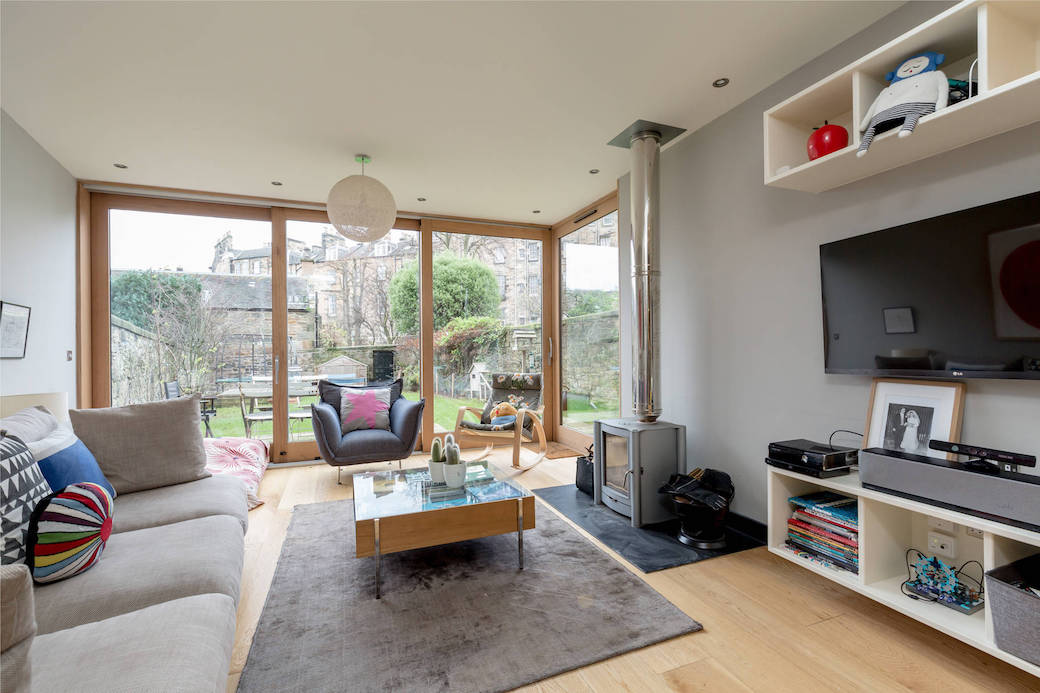 It’s just that, to me, the garden room is the space that makes this period property work so well as a family home. Accessed from the dining-kitchen, this extension has re-orientated the way in which owners Antonia Allan and her husband David live here with their three sons, Eddie, Linus, and Rollo. Now, thanks to the installation of a projector and drop-down screen, the drawing room is primed for movie nights, while the family spend most of their time downstairs between the kitchen and dining space and the garden room. In winter, with the stove lit, this is a snug zone that still pulls in lots of natural light; in summer, with the doors opened up into the garden, this extension has given this property the indoor-outdoor flow it was lacking previously. 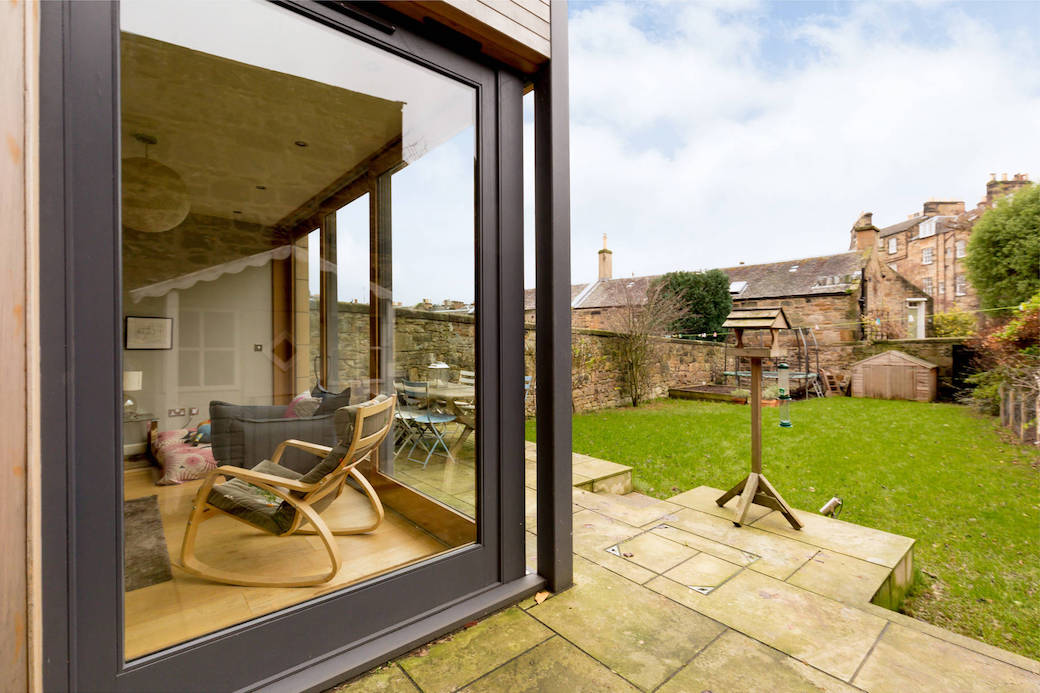 When Antonia and David decided to relocate from London to Edinburgh in 2008, they were spared a lengthy search for their new home. The couple are both Scottish and Antonia had grown up in nearby Lynedoch Place while her grandmother lived in this apartment on Clarendon Crescent. “My Grannie had lived here since 1967 and I’ve always loved this flat,” Antonia says. When Antonia’s grandmother decided to move to East Lothian to be closer to her parents, the opportunity arose for the couple to buy this property. Nothing major had been done to the place for years, but, as Antonia says: “We wanted a project; the fact this flat needed work really appealed to me as I’d always seen the potential.” 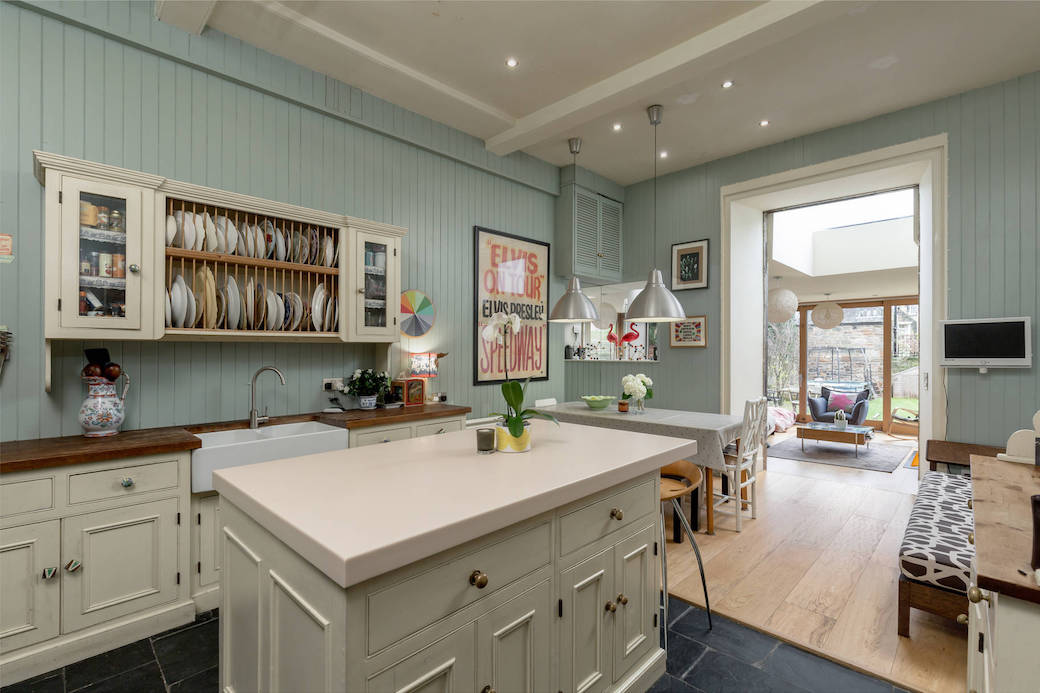 The first area the couple tackled was the kitchen. This space alone reflects Antonia’s aesthetic as she loves combining traditional with contemporary design and adding in a few quirky elements. The cabinetry came from Old Pine & Pieces at Fenton Barns in East Lothian and was painted in a soft eau-de-nil shade, with a darker hue transforming the existing timber-clad walls. The floor cabinets are finished in timber worktops, with a classic Belfast sink, while the new kitchen island is topped in Corian, adding a contemporary edge. Antonia picked up the colourful door and drawer handles from Anthropologie. 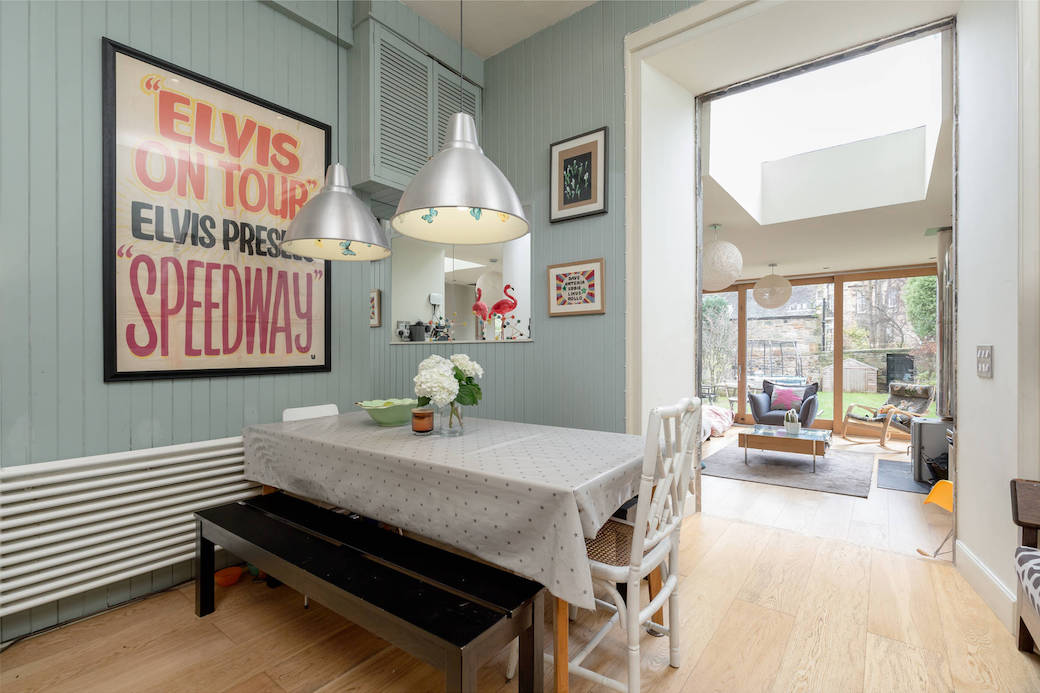 “I’m a complete collector, or a hoarder as my husband would say!” admits Antonia, who has a great eye for combining pieces and adds personality to the interior with quirky finds from eBay or sourced from antiques markets in the south of France. As she says: “These Georgian houses have such beautiful bones, you really can do anything. I read a lot of Livingetc and have probably taken inspiration from some of the houses featured there.”

The biggest change came about in 2013 when the couple added the extension. “My taste changed between moving in and doing this extension, so it was good that we waited,” Antonia reflects. While the kitchen and dining area provided a great family zone, the couple realized that their home would work better with an additional living space on the garden level. 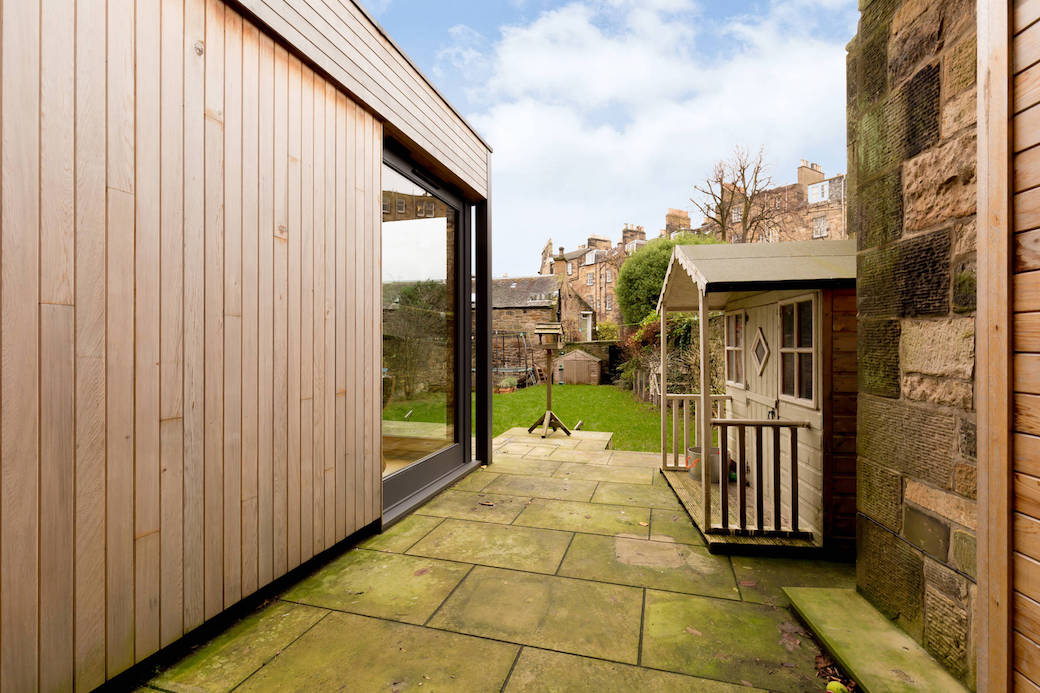 Initially they contacted an architectural draughtsman, “who didn’t really understand the planning regulations or what we wanted,” Antonia says, which led them to contact architect Craig Amy. Craig has worked on a number of house extensions including work on listed buildings – this flat is A-listed – and he immediately understood the couple’s brief, which included the creation of a new en-suite for the rear bedroom on this level. 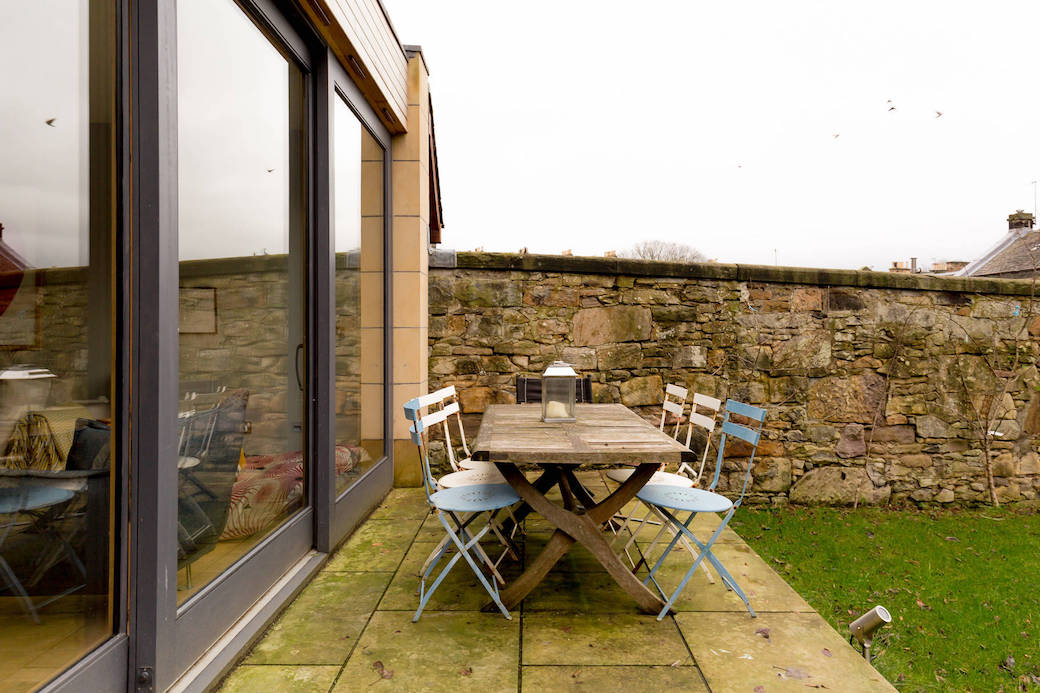 Planning restrictions meant that the extension could only cover 50% of the rear elevation, and Craig designed the garden room to make full use of this available size. “The single biggest challenge was satisfying the planning department’s 50% rule when the clients wanted to extend off the back of both existing rooms,” Craig explains. “The garden room was simple; it’s the size the client wanted, but it covered just more than the 50%. So the tricky bit, and I suppose the clever bit, was to come up with a design for the en-suite that satisfied the planners by being as unobtrusive as possible, while still providing a decent sized en-suite for the client.” 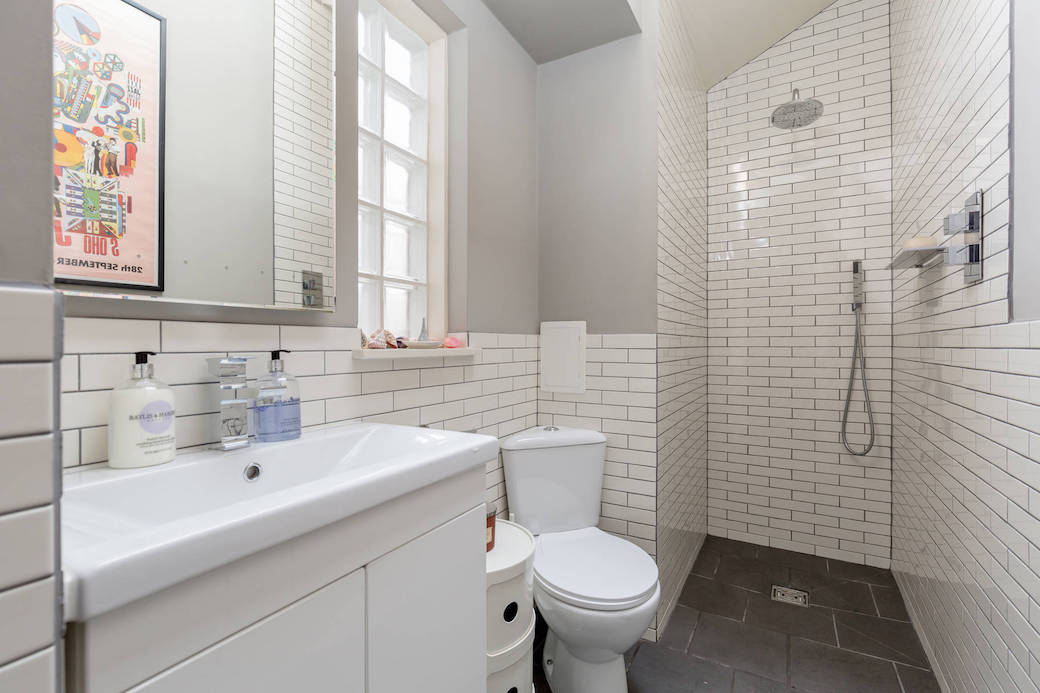 There was an extending rear outhouse, and Craig used this and extended it slightly to create space for the toilet. “The en-suite is really fun, I love it; it might even be my favourite shower room of all the ones I’ve designed,” Craig says. “The solution was to create a very small extension to the side to create a recess internally to house the toilet and wash hand basin and to give enough space to access the shower beyond. We also used space saving sanitaryware including a 45 degree corner mounted toilet that doesn’t project out as far as a standard toilet, but gives much more usable space directly in front of it.” 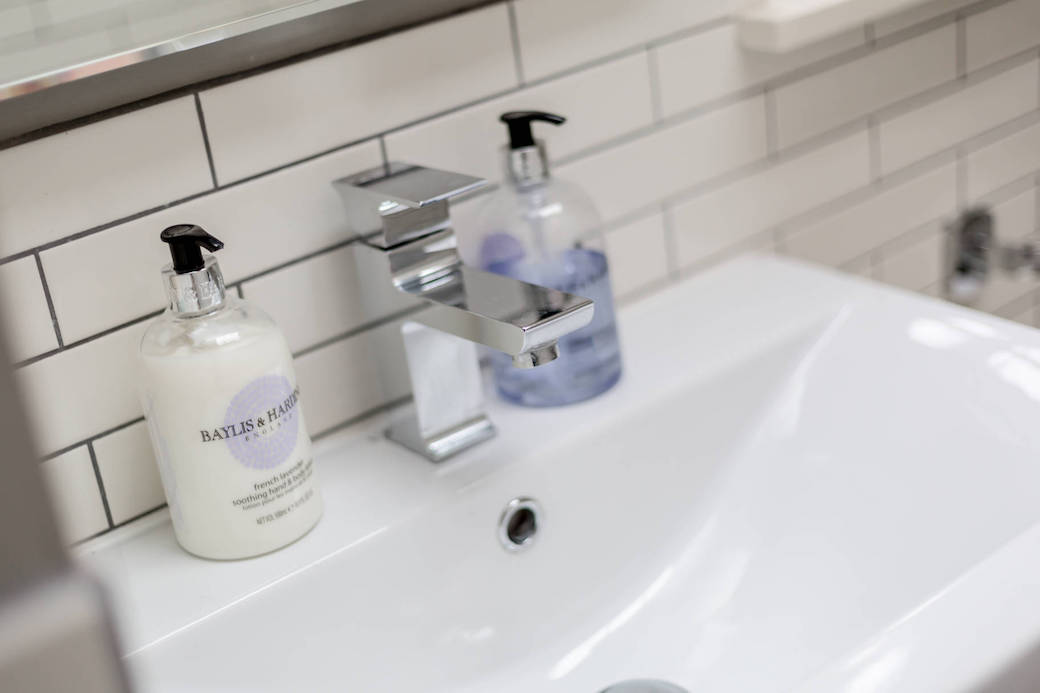 “The solution to natural light was also simple,” Craig says. “Rooflights always give the maximum amount of light without interfering with usable wall space and the off-white metro tiles emphasize that further.” This en-suite has such a clever and crisp design, again it demonstrates the value of bringing a good architect on board a project.

As for the main extension, Craig says: “The design of the extension was very straightforward, and I love the way you enter into the rooflight void as you step down into the space. The only minor challenge was the boundary conditions where we were left with an awkward junction with the neighbour’s extension and the boundary wall. Discussions between us and the neighbour and their architect led to the final solution on site.” 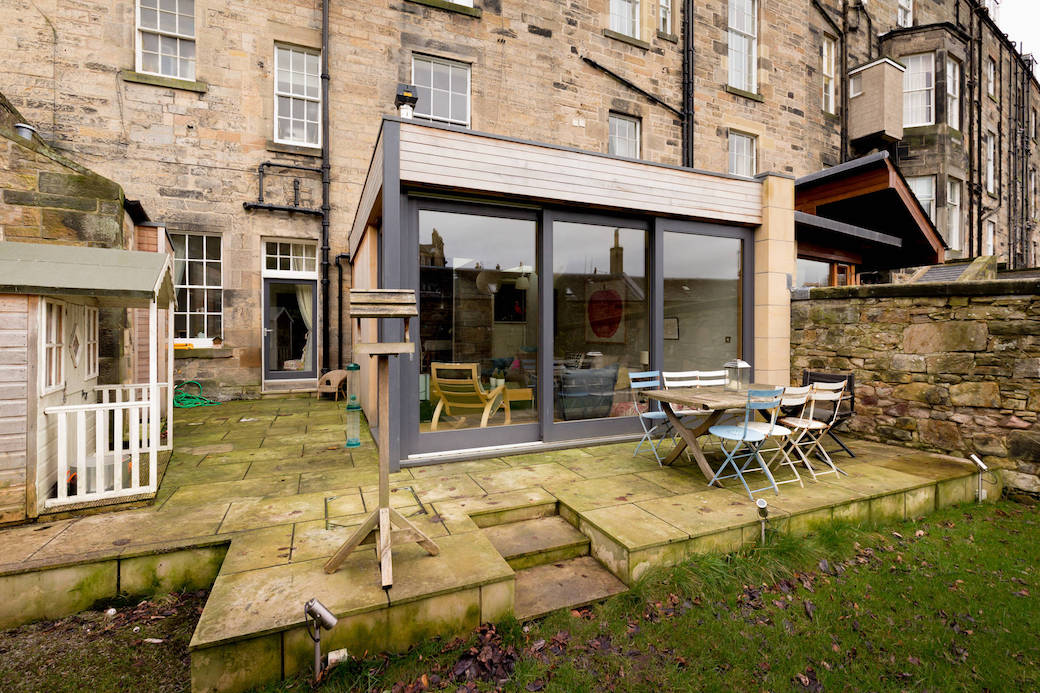 The extension is clad in Western Red Cedar and its two rooflights draw light into the rear of the space and on into the dining area behind. “We use this room all the time,” Antonia says. “It’s quite unusual as even with all this glass we aren’t overlooked because of where we’re positioned. And we have access to the lane behind the crescent, which really helped when building this as everything came in and out via the lane rather than going through the flat.” 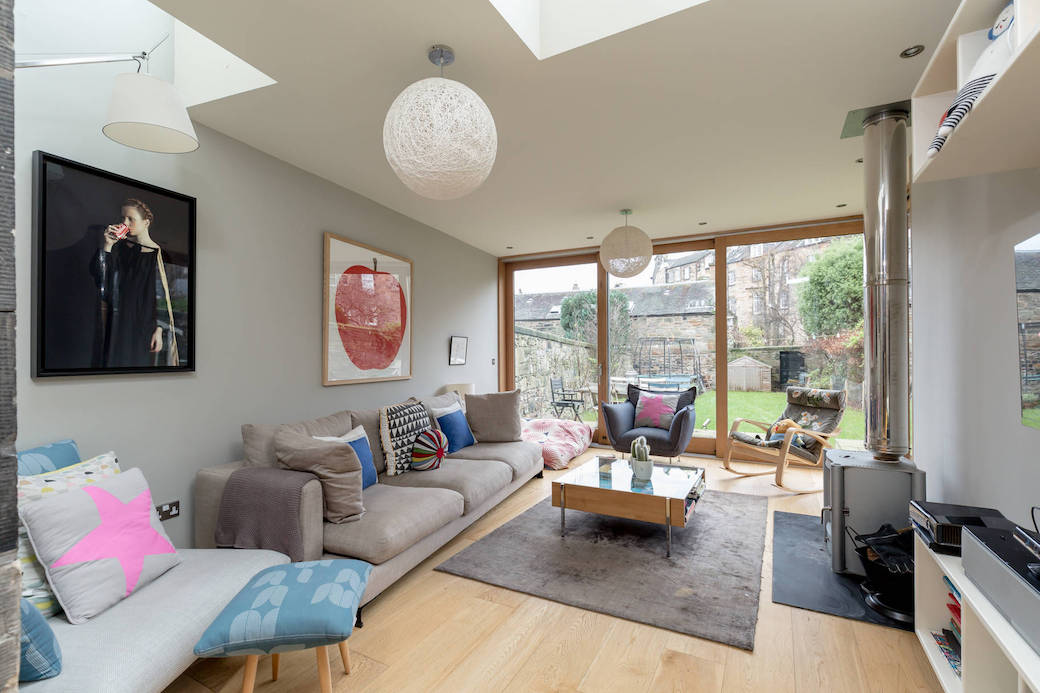 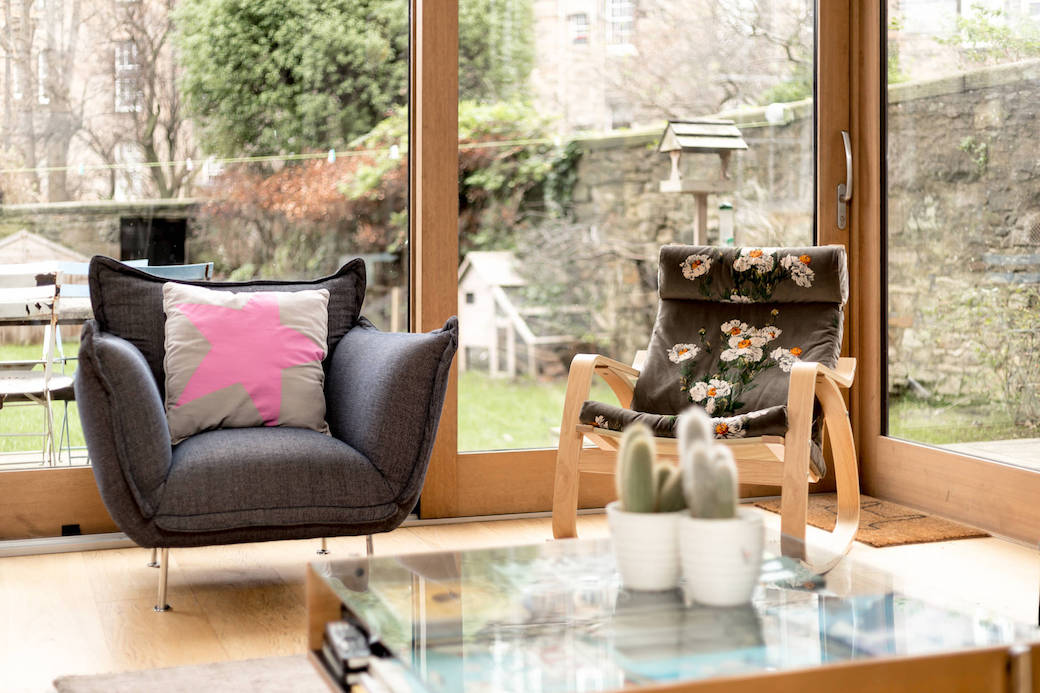 A section of the original rear stone wall has been left exposed within the garden room, highlighting the boundary between old and new, while a mirrored section in the dining area catches the light that comes in through the opening in the rear wall. Again it’s a simple but clever touch. “Adding the extension has insulated the back of the flat and made it much warmer than it was before,” says Antonia, who has furnished the space with a cool mix of contemporary pieces and added colour in the accessories and artworks. 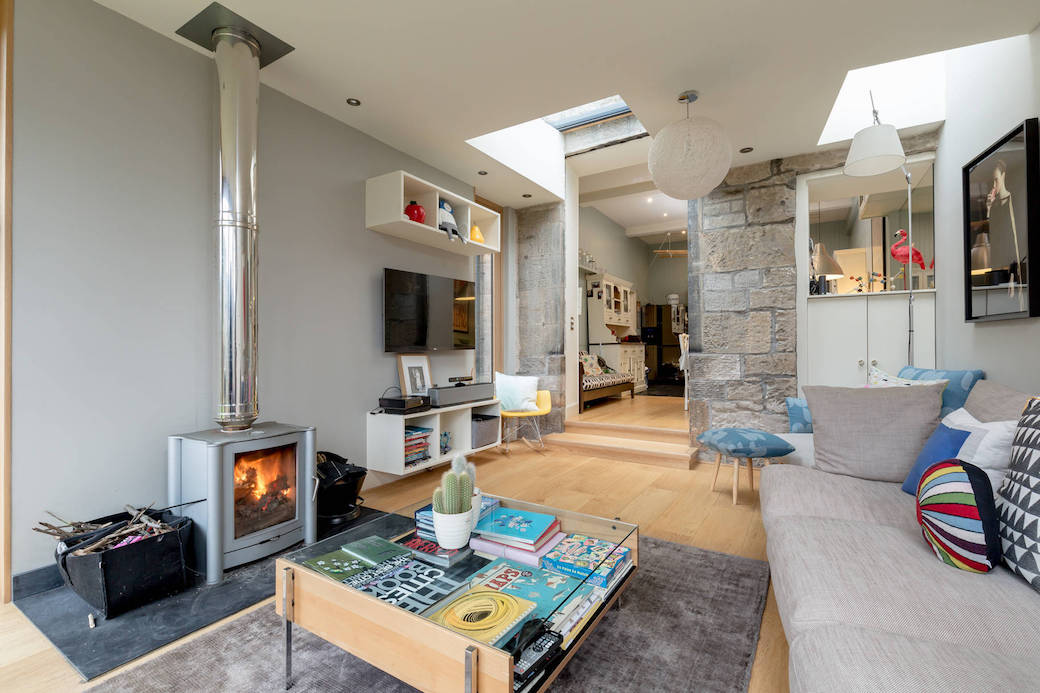 And did this extension help sell the property? Well, it’s worth mentioning that between receiving the photos and then featuring this apartment in Scotland on Sunday a few weeks later, this property had already gone under offer with Simpson & Marwick and is now sold. So yes, it’s a great location and address, and a great looking property, but this fantastic garden room must have also played its part in making this apartment stand out.

Now as the family prepare to move out of the city to East Lothian, Antonia acknowledges that this project has whet her appetite for another. “I’d love to do this again,” she says. “My dream is to build something; to find a plot of land and build our own version of a HUF HAUS. Maybe Craig could build us a house. Or we’ll find a traditional house again, and we’ll build a glass box on the back.” 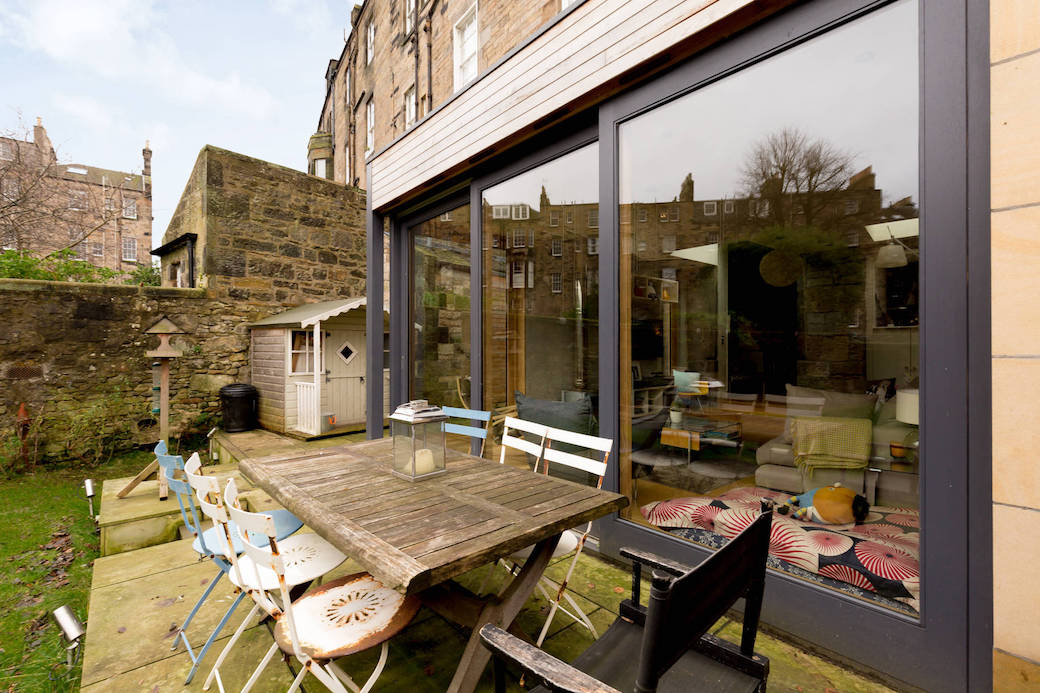