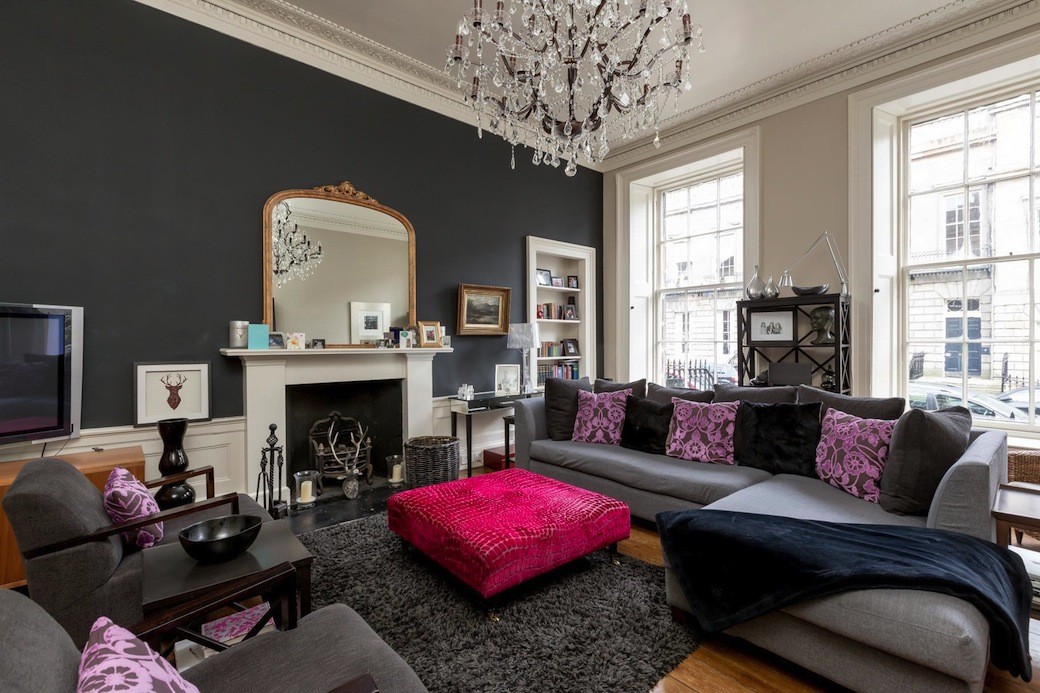 The first time I visited this ground and garden level property at 4 Carlton Street in Edinburgh’s Stockbridge area was back in 2010, when I was writing about the interior for Scotland on Sunday. I loved both the property itself – this is one of my favourite streets in Edinburgh – and the interior styling that combined subtle French with Scandinavian influences.

Yet when I went back to see this property, which is now on the market with Knight Frank, I didn’t realise it was the same place. Nothing felt familiar. Then, as I was chatting to owner Christine Maclachlan, the penny dropped. This was the same place, only transformed to create another very different but also stunning interior.  “The previous owner had done the house beautifully,” Christine agrees. “We loved the house when we bought it, but the existing layout wasn’t ideal for a family of four.” 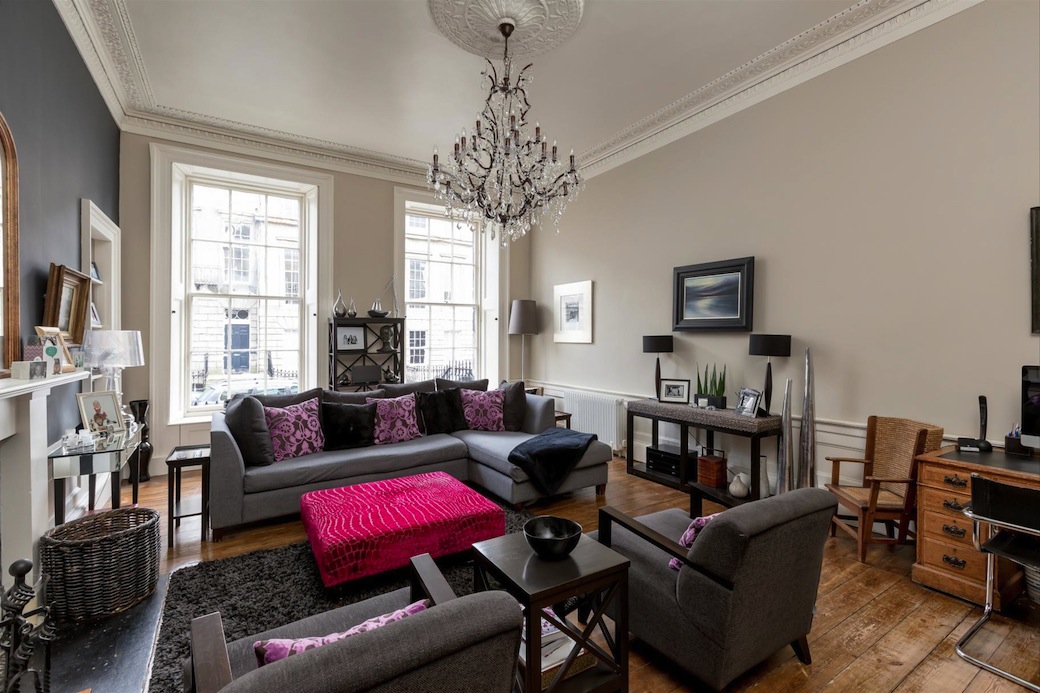 When Christine and her husband Glenn purchased this Georgian ground and garden level apartment five years ago, they hadn’t intended taking on a project. The couple, who have two daughters, had planned to split their time between Edinburgh and Perthshire, but had ended up spending more time in the city. As Christine says: “We realised if we reconfigured the garden level, added more storage, and gave everyone their own space, it would work much better. And we like doing this. However nice a house is, we like putting our own stamp on a place.” 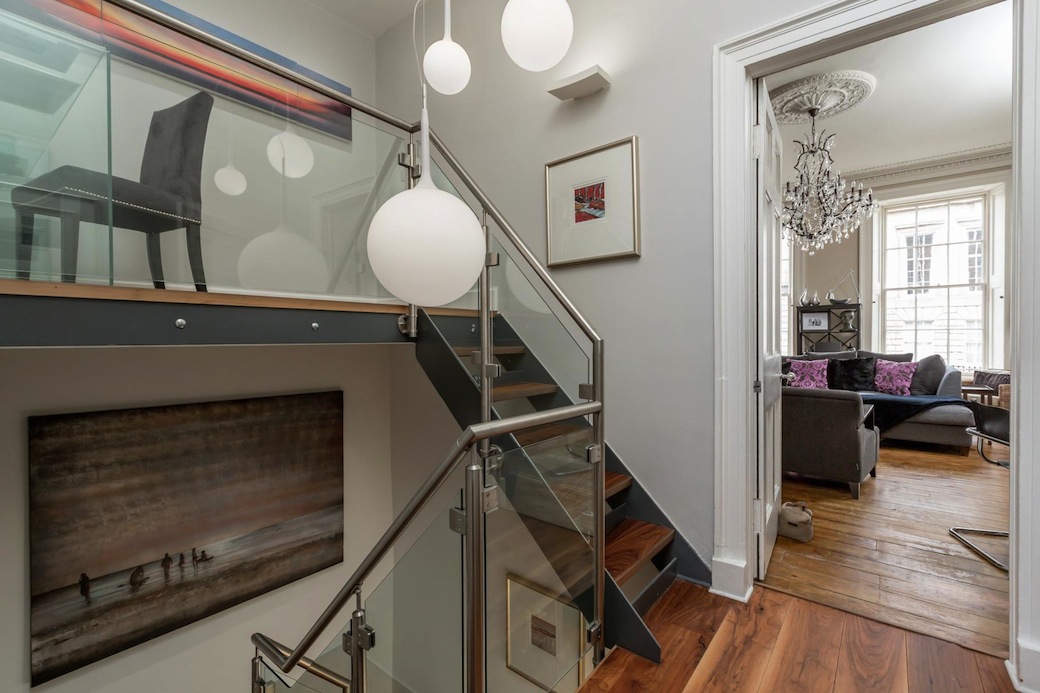 The family lived here for six months before moving out for the work to begin. The only space that hasn’t been altered in some way is the drawing room (photographed above). The hallway was opened up and a new staircase was inserted leading down to the garden level, and up to a new mezzanine level study area that was formed when the false ceiling was stripped out.

The rear of the ground level was also reconfigured to create today’s open plan kitchen and dining area – there was a dining area and kitchen here before, but the Maclachlans swapped the spaces over, creating a more generous cooking zone. The couple had initially considered relocating the kitchen downstairs to the garden level and extending the property at the rear, but decided against this. As Christine says: “We realised that it was nice having all our living space on one level.” 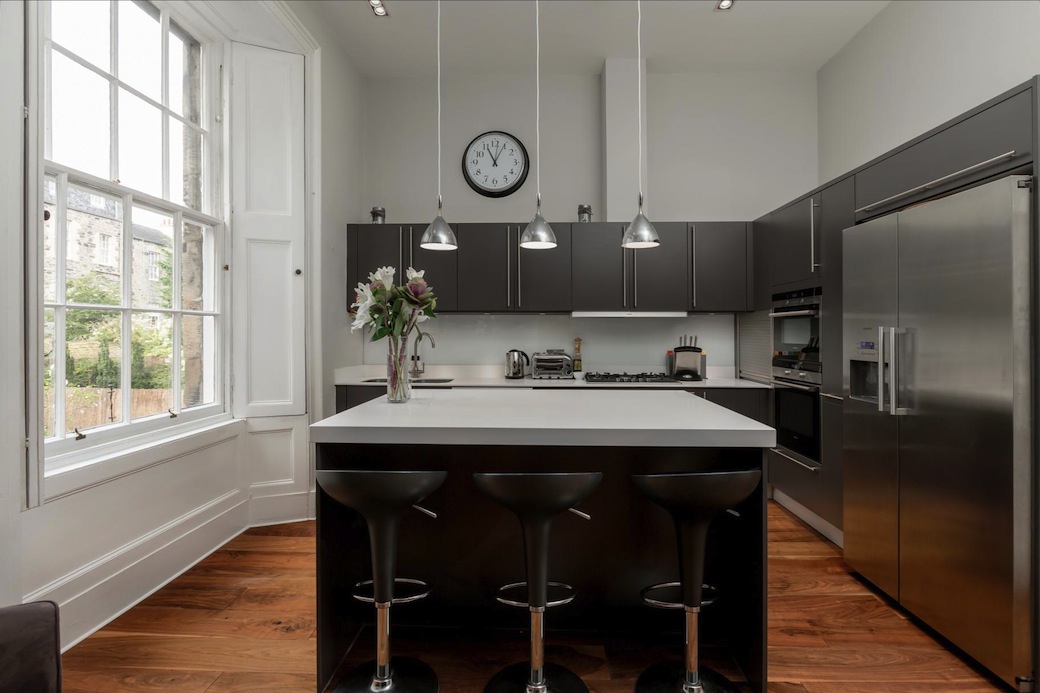 The dining area’s booth seating was an inspired touch. “It isn’t a huge dining area, but we can fit lots of people in here,” says Christine, who worked with Corrine Muir of Guardian Soft Furnishings when choosing fabrics, including the alcantara on the booth seating. Mattiazzo wallpaper by Designers Guild adds to the warm and tactile mood of this space. 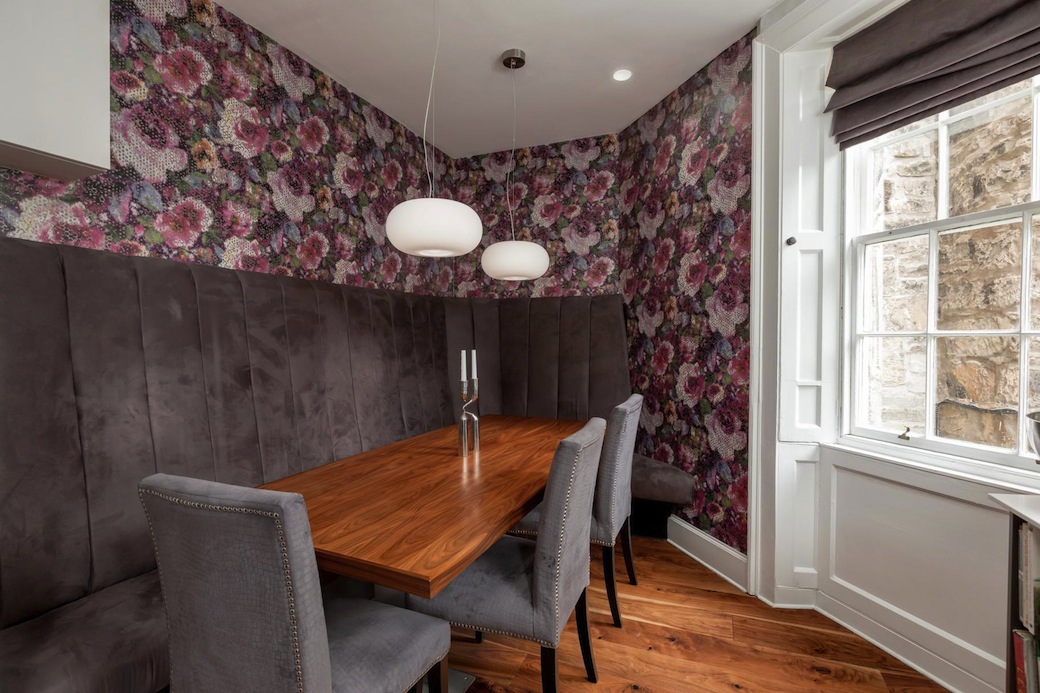 Lighting was also a key consideration throughout, and the couple turned to lighting consultant Scott Ferrier of LightMedium. Simple and sculptural Prandina pendants are suspended over the dining table while the kitchen island is illuminated by polished Dokka pendants.

The couple planned the cooking zone with the kitchen company Ekco, and this space combines anthracite matt-finish cabinets with glossy white Corian worktops and a glass backsplash. The dark grey cabinetry was chosen to create a visual connection with the palette in the drawing room, where the fireplace wall is painted in Farrow & Ball’s Off-Black with Stony Ground on the other walls. “We always have the doors open so, although separate, the colour flows through,” Christine says. 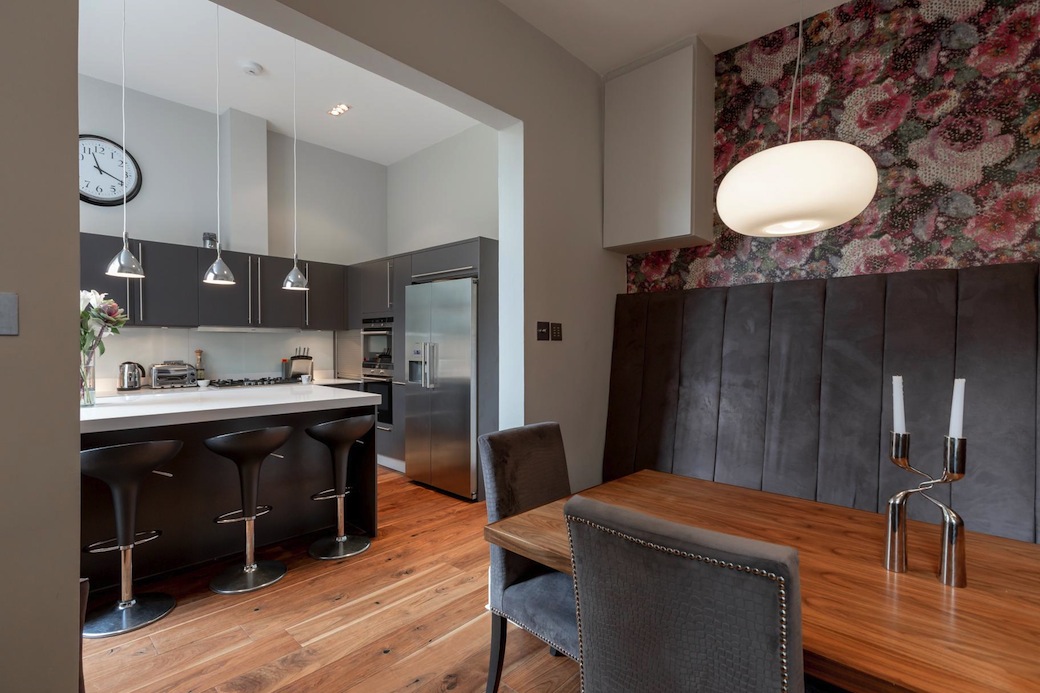 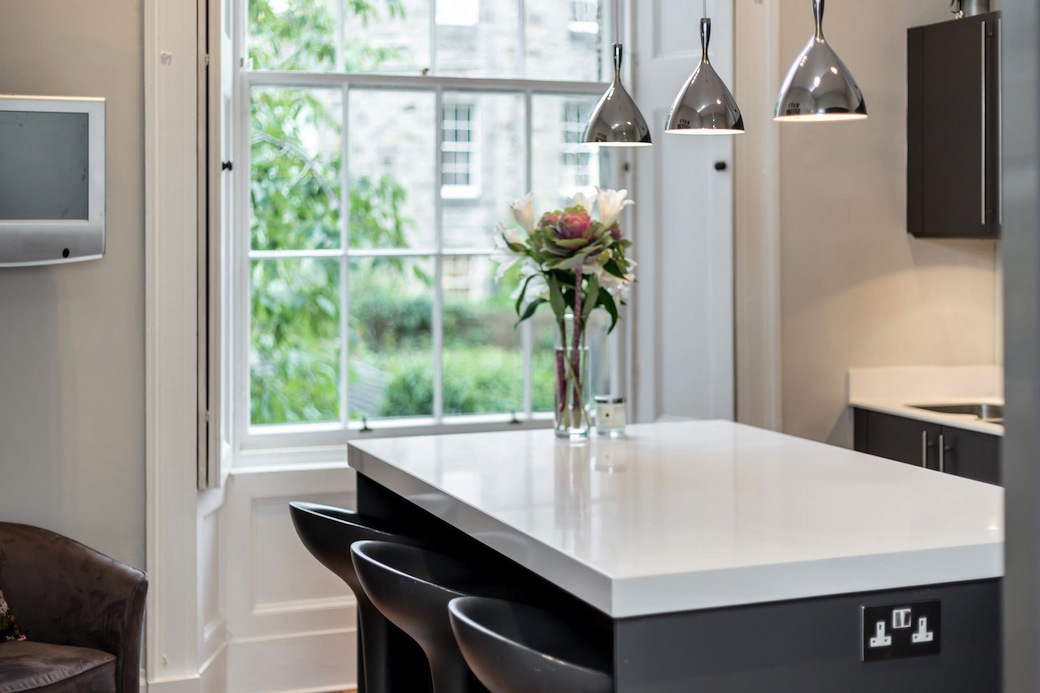 The garden level was also transformed. Additional storage was created and a corridor was removed, increasing the size of the smaller of the two bedrooms at the front, and a new utility room was created. The back of the garden level was completely reconfigured to create today’s master bedroom suite, and French doors now open onto a terrace that leads to the south-facing rear garden, creating the indoor-outdoor connection the couple wanted without the need for an extension. 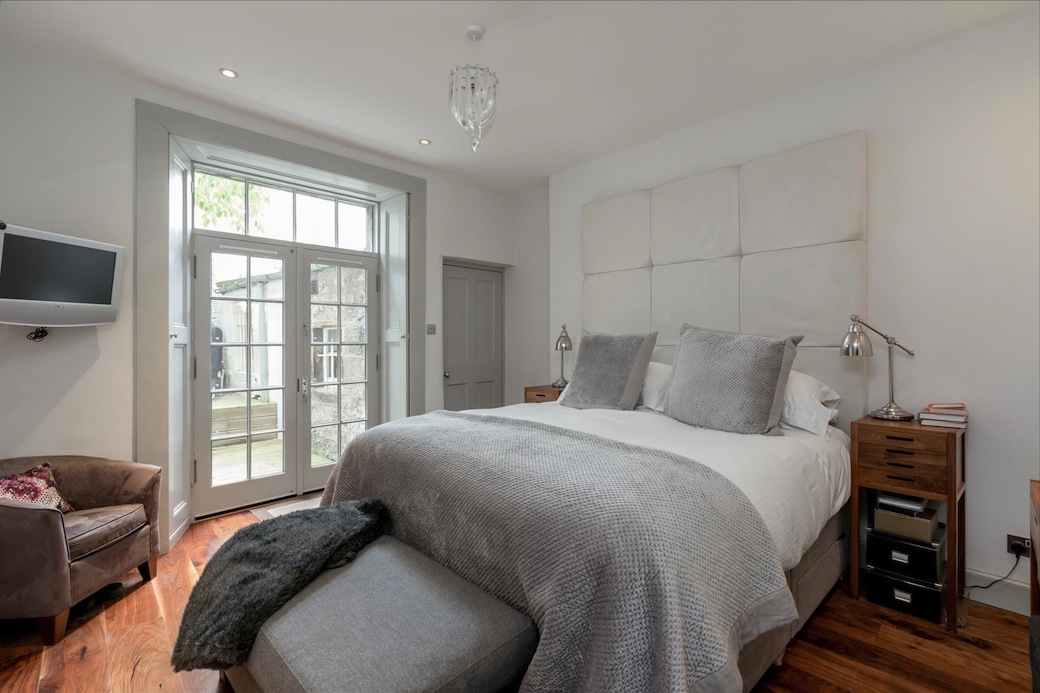 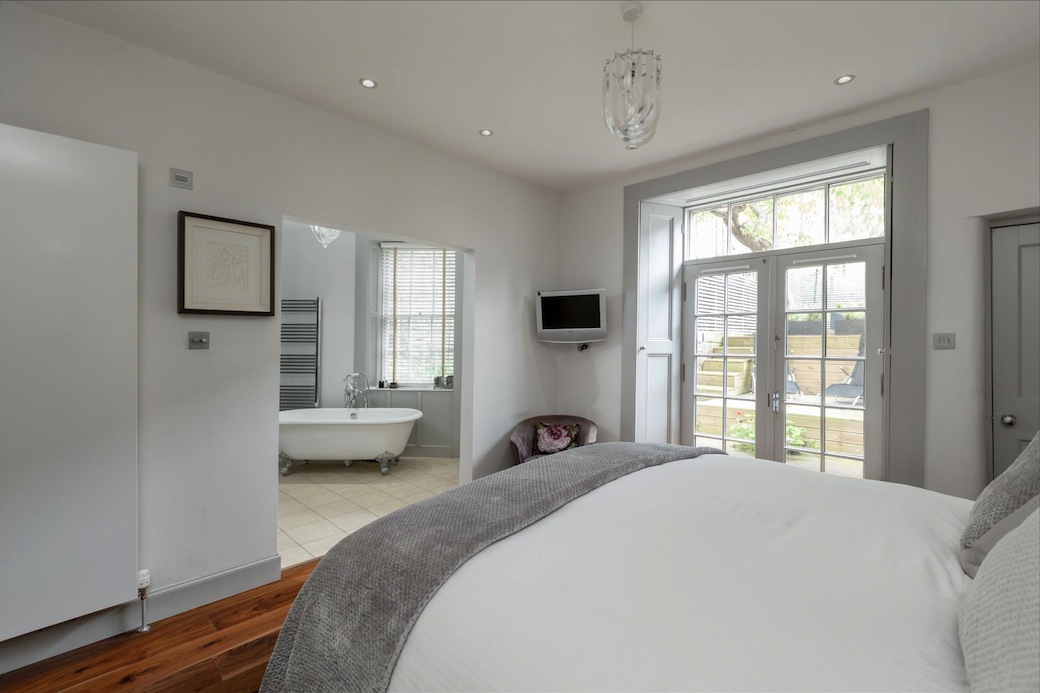 In the master suite, the challenge lay in creating an ensuite that would complement the bedroom thanks to the open plan layout. “I never really fancied a contemporary bathroom,” Christine reflects, “but then I don’t like a bathroom to be really traditional either.”

Instead she mixed aesthetics, combining a claw foot bath and traditionally-styled basin and shower head with a simple sheet of glass defining the shower area. The latter is lined in slate tiles that have been cut into a brick formation. 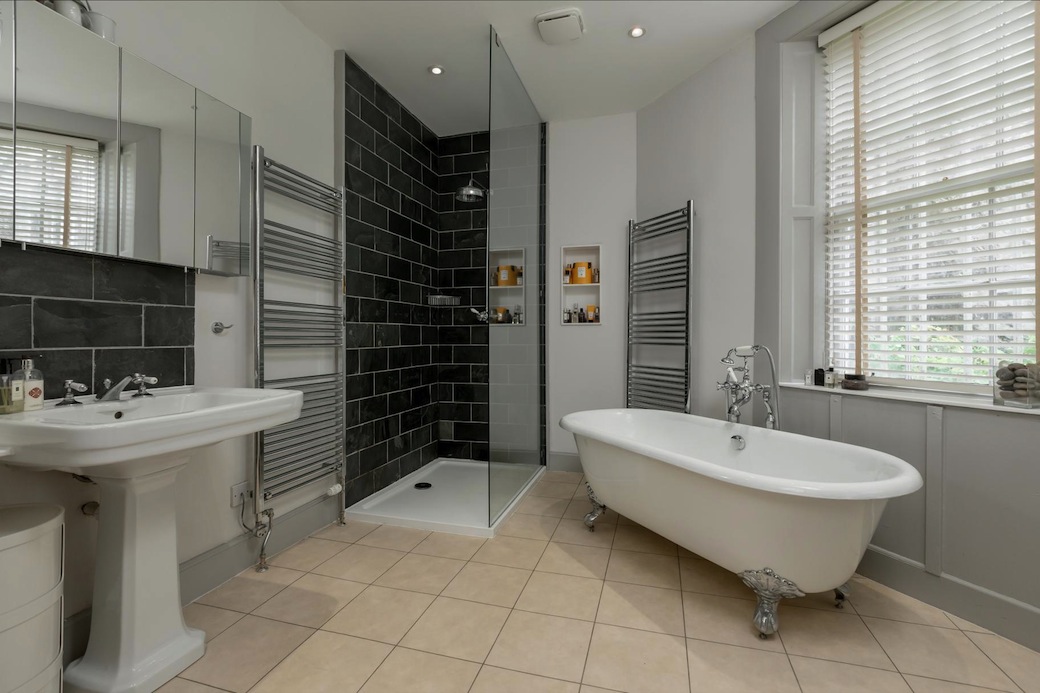 Notably, opening up the hallway on both levels has in itself transformed the way this property feels, particularly downstairs. “The original hallway felt small, and the staircase had a different position,” Christine explains. Glenn is a steel stockholder and the new staircase was constructed by Hepburn Fabrication Services using steel from his company, combined with engineered walnut treads and a glass balustrade. 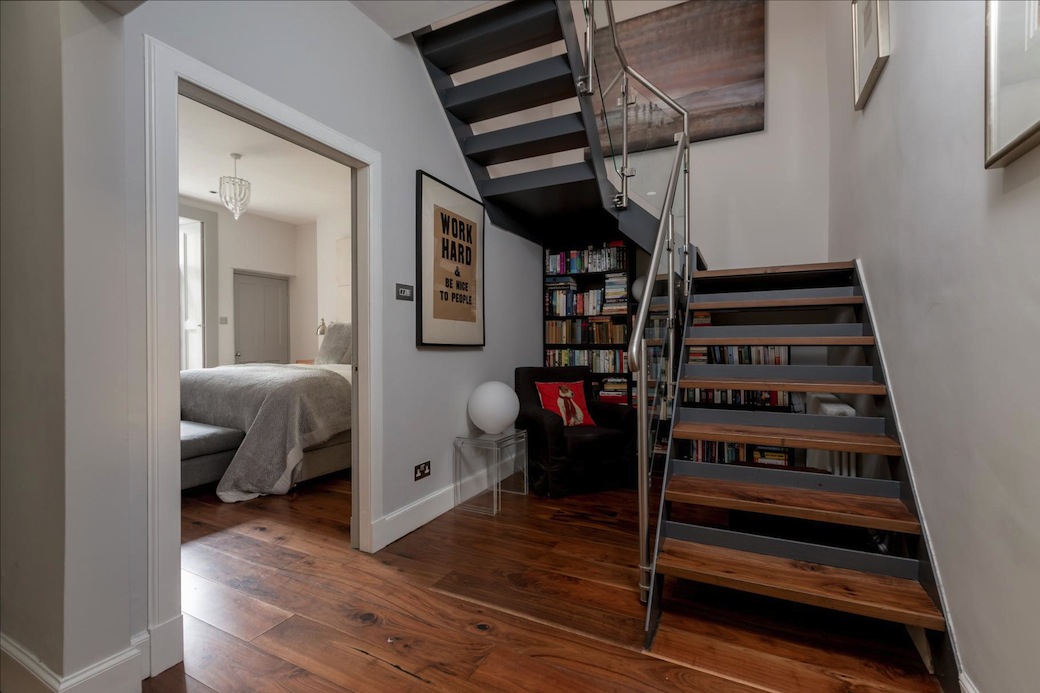 After spotting the sculptural Artemide Castore suspension lights that hang over the stairwell in a magazine, Christine was initially unsure whether they would work here – was the space big enough? “Scott assured me it was, if they were hung properly,” she says, and these beautiful fittings now add to the impact when walking in. And as there is an integrated lighting system, the mood can be changed subtly throughout the day. 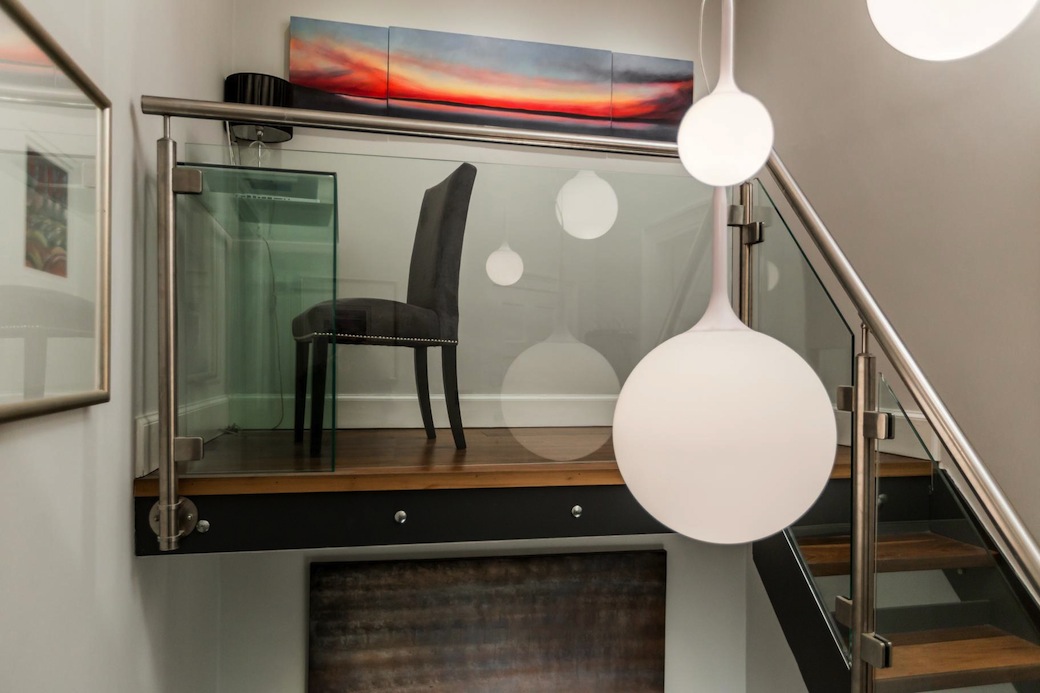 “Sometimes you get a formula of things that work, and possibly because we move so much we don’t get tired of the formula,” Christine reflects. Saying that, nothing about the interior of this property feels formulaic as this elegant living space is filled with personality.

4 Carlton Street is on the market with Knight Frank. All photography by Square Foot Media.