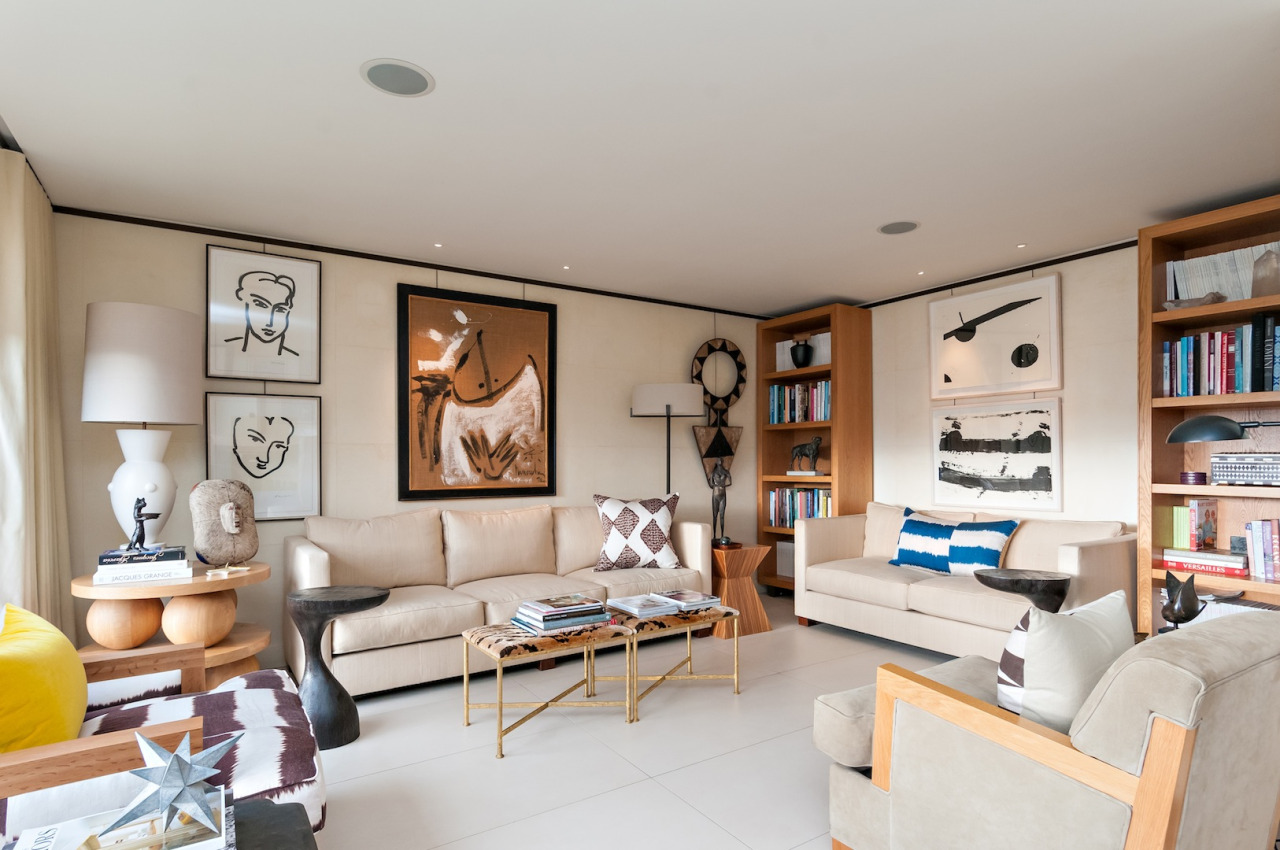 Even after spotting the For Sale sign outside this property at 6 Belvedere Park in Edinburgh’s Trinity area seven years ago while taking a short cut to The Shore, interior designer Ian Smith didn’t imagine that he would soon be swapping a Victorian house in Kirkliston in West Lothian for this three bedroom apartment within a 1960s block of flats.

Ian, who launched his business, Ian Smith Design, back in 2003, initially bought the property as a project – a place to refurbish, redesign, and sell – but he changed his mind after moving in. As he says: “I moved in thinking, I’m not going to stay very long, but then I loved the flat and loved living here.”

Here, Ian explains what attracted him to this property, and how he transformed the interior – which hadn’t been altered since the ’60s – to reflect his distinctive style. 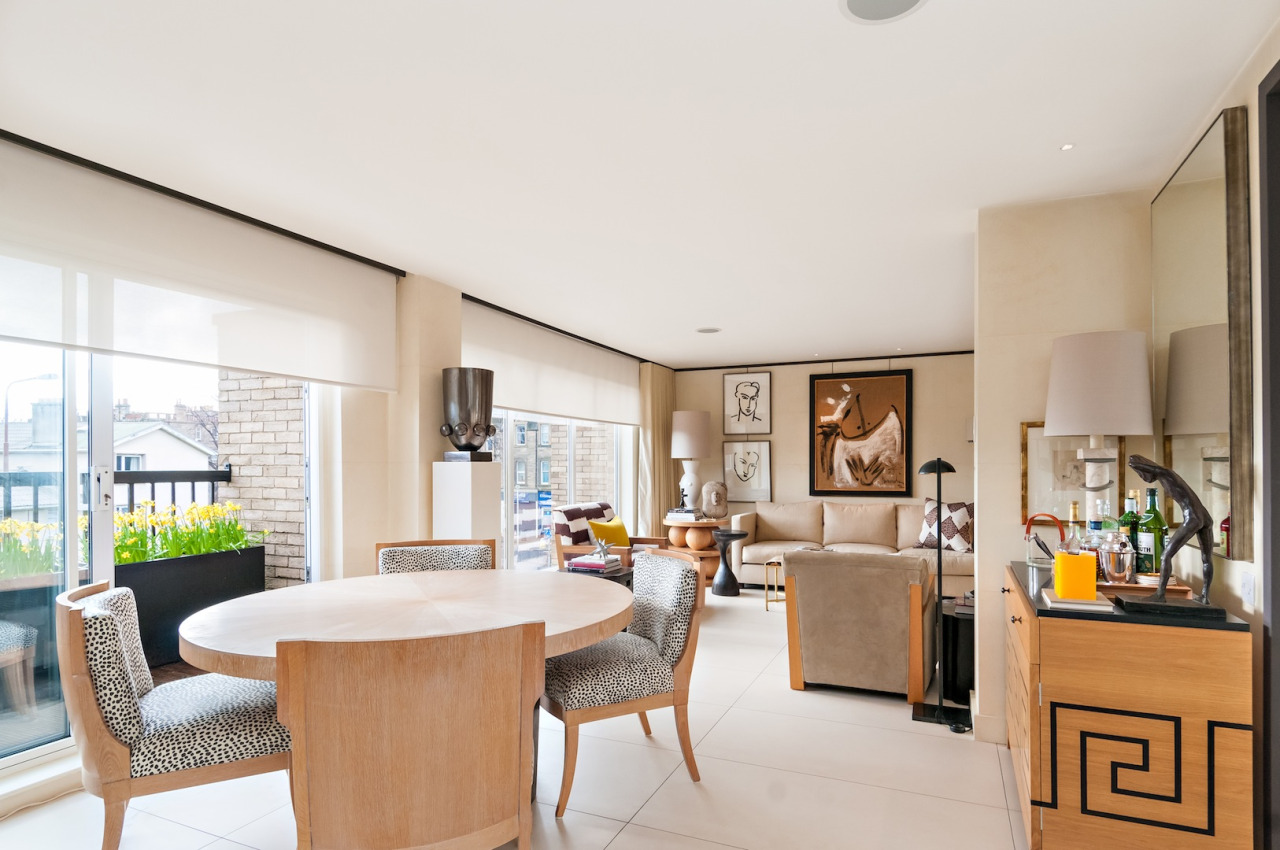 What was it about this apartment that made it stand out to you?

Having been born in the 1960s, this type of architecture appeals to me. I like ’60s architecture, and I like Georgian architecture – two extremes, but they both appeal. This block of flats is noted as being of interest architecturally for the period, and I liked the space immediately. It flows well and because the living space is south-facing, with glazing along the entire wall, you get all this light, even on a dull day.

How did you go about the refurbishment?

Everything needed to be done here. The flat had electric heating but I decided to install underfloor heating, so all the existing parquet had to be lifted – and it had been laid on bitumen. Lifting the parquet and shoveling out the bitumen was a far bigger job than I’d anticipated.

The flat falls into two halves: the living and dining space and kitchen, and the side with the three bedrooms. Because of the way the internal walls on the bedroom side had been constructed, when I was rewiring the flat all the original walls had to be taken down and rebuilt. The ceilings were also lowered slightly throughout so I could install low voltage lighting and an integrated sound system. I also removed a cupboard off the hallway on the bedroom side to increase the size of the shower room – which had been a bathroom originally, but I wanted a decent shower room rather than a compromised bathroom. 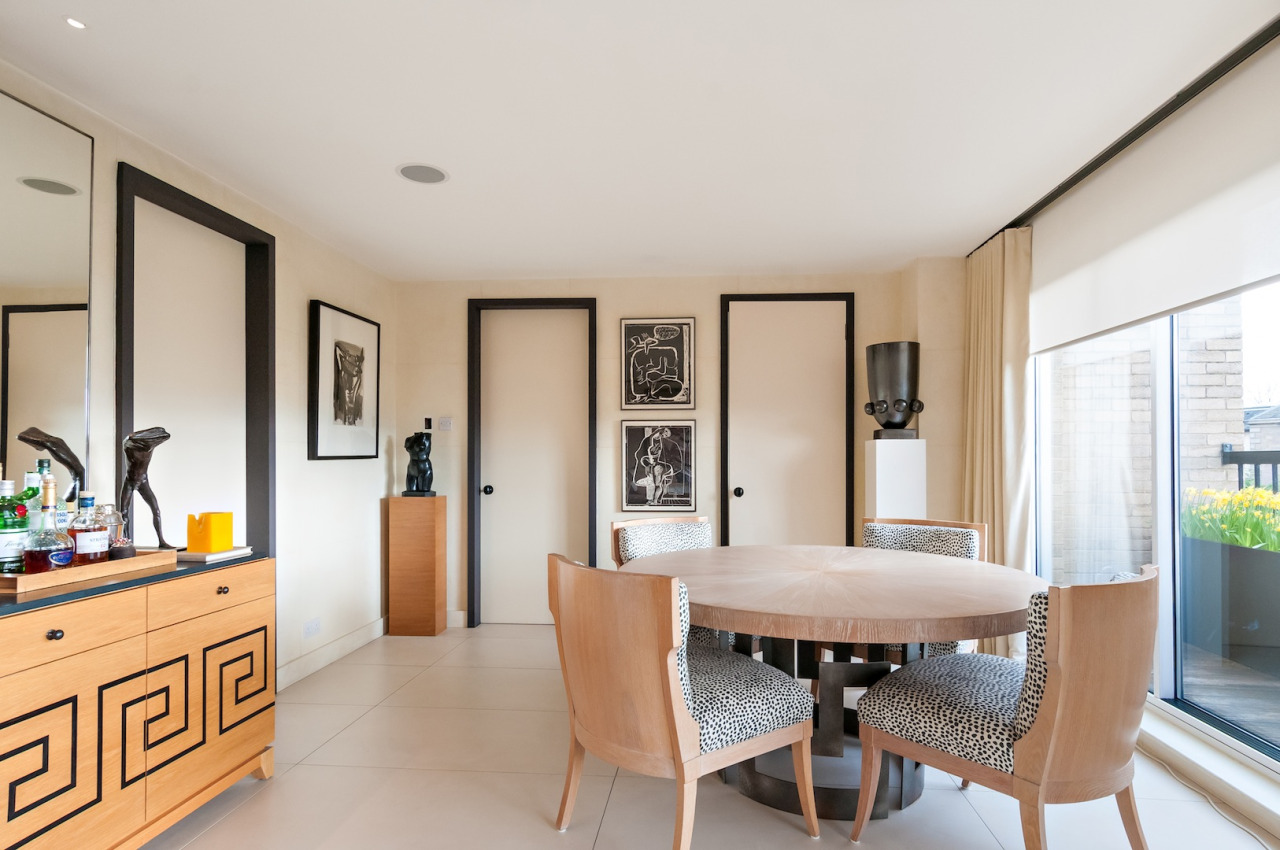 Also, I didn’t like the fact that the original doors were quite low, so I extended all the doorways, and took the doors up to ceiling height in the bedrooms. This changed the whole space as the ceilings feel higher now, and it also feels more elegant. I’ve done this in developments and it’s always been successful, whether in new build or an older property.

I also added the sliding oak screen to the middle bedroom, which I left open plan at first as I use this space as a study, but whenever friends came to stay I realized it needed to have that flexibility to work as a bedroom.

How did you approach the interior in terms of the style you wanted to create here?

I wanted it to feel as if you were walking into a contemporary apartment rather than a 1960s apartment. I like simple detailing and clean lines. I probably love texture more than colour. I work with colour all the time so I want a calm palette when I come home, with little splashes of colour, so you’ll see accents of yellow and tan and teal as you move through the flat.

I always like changes in texture, and I wanted to bring that into this space. There’s an antiques dealer in the Left Bank in Paris where the walls of the shop are finished in vellum panels, so I recreated that look here in the living and dining space with a paint effect, which was hand painted by artist Rachel Bell. I’m a great fan of the French interior designer Jean-Michel Frank, and this is a very Jean-Michel Frank detail. Rachel interpreted what I wanted so well. It’s given the living space a slight texture rather than flat painted walls. 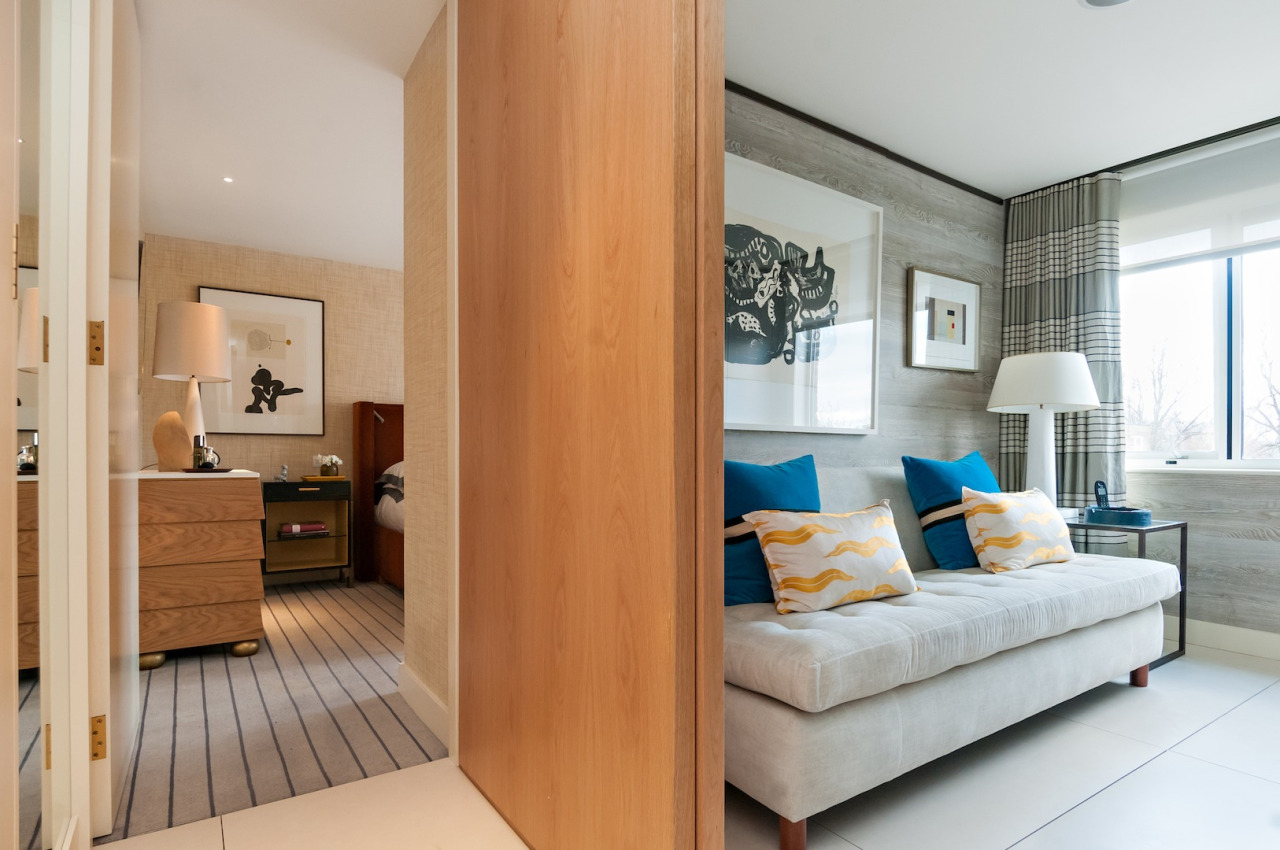 I also introduced texture into the bedrooms and the hallway on the bedroom side using wallpapers. The main bedroom and the guest bedroom have a Japanese paper wallcovering, while the middle bedroom and the hallway feature greyed oak panel wallpaper by Nobilis. The finish is so three-dimensional that everyone thinks its timber. I also clad the entrance hallway in MDF panels and painted them, which changed the feel of the space when you walk in.

The kitchen and the shower room are very contemporary – how did you go about designing these spaces?

The kitchen originally had cabinets all around the walls, which made it feel smaller. I like kitchens to be almost professional in their design with allocated areas so all the cooking appliances and fridges are integrated on one wall, with the hob and the sink in separate areas so the space functions really well. I also like kitchens and bathrooms to be contemporary and wanted something that wouldn’t date. I chose this kitchen from Craighead & Woolf, combining cabinets in a pale putty colour with a dark timber finish, and with Corian worktops. 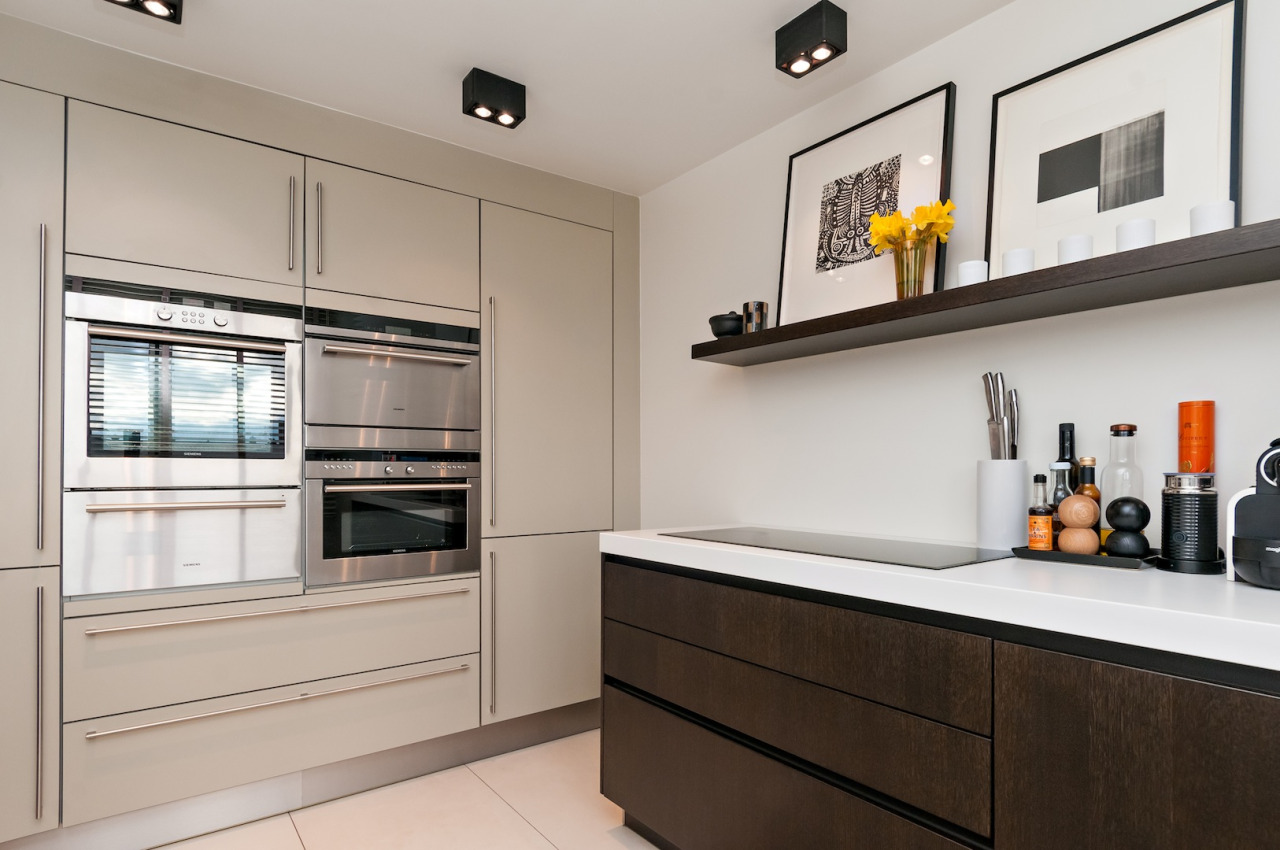 I added the shelf to display artworks as, for me, the things that make a home are your possessions, the artworks and pieces of sculpture, so it would have been strange to have artworks throughout the flat and not in the kitchen.

As the shower room is an internal space I wanted it to be dark, and then I saw these patterned wall tiles used in a place in Pimlico in London. They’re slightly Moroccan in style, and combined with the black granite on the wall behind the Corian basin, and with oak cladding the wall behind the toilet, it makes the space feel warm. Again it was about combining textures. 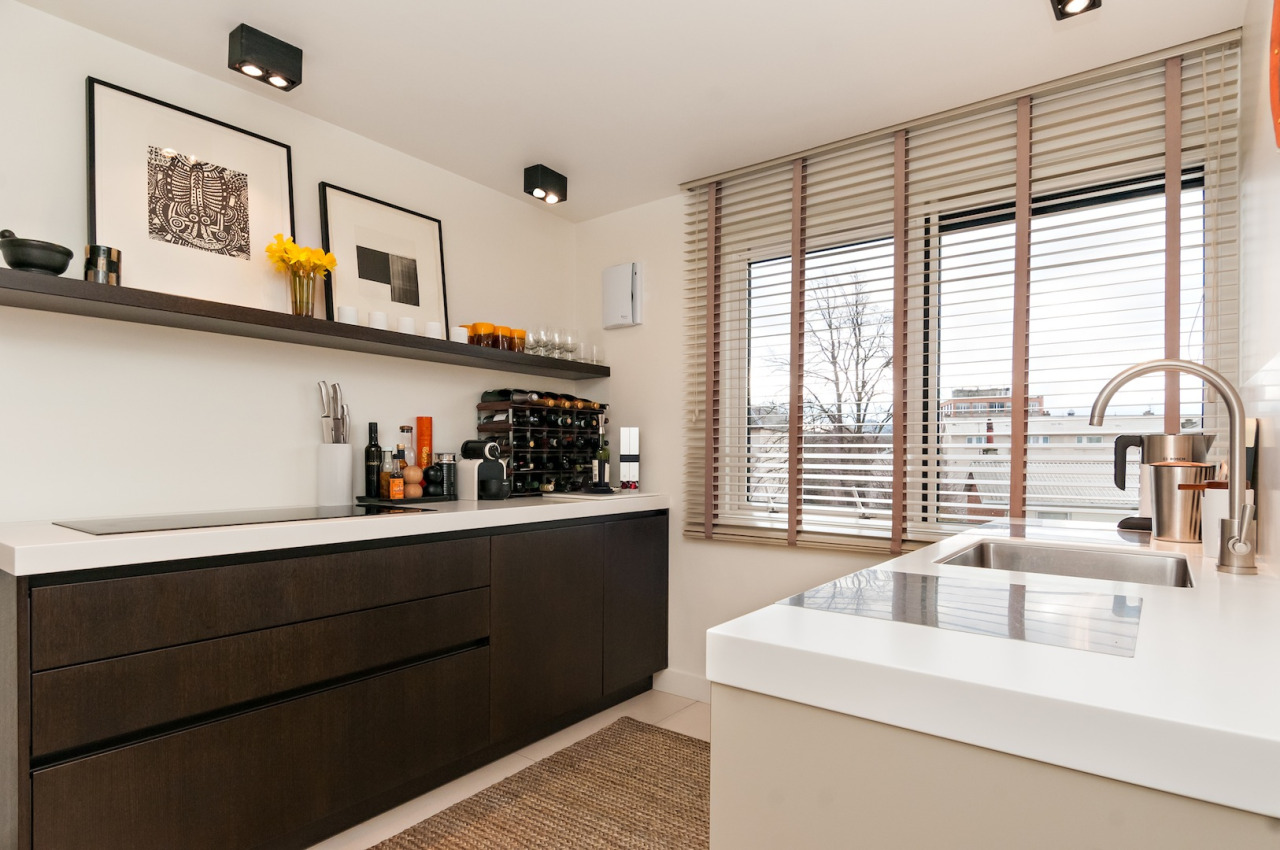 Did the open plan living and dining space present any challenges, and how did you go about furnishing this area?

I always look at a floor plan first and figure out how to live in a space. Originally, there was an electric fire on the wall behind the sofa, and everything was arranged to look towards the fire – which didn’t make sense when you have this incredible view out towards Arthur’s Seat, and when the dining area opens onto a south-facing terrace. So I removed the fireplace and reconfigured the layout to look out towards the view. If you arrange furniture correctly the space becomes bigger and everything flows from that.

Most of the furniture is by Ian Smith Design. I love designing my own furniture; I love shapes that are classic and simple. The few exceptions are the dining chairs, which are Italian, and the Duck Bill side tables, which are by Julian Chichester. There’s also lighting by Porta Romana, while the sculptural pieces on plinths are up-lighters that frame the dining area. 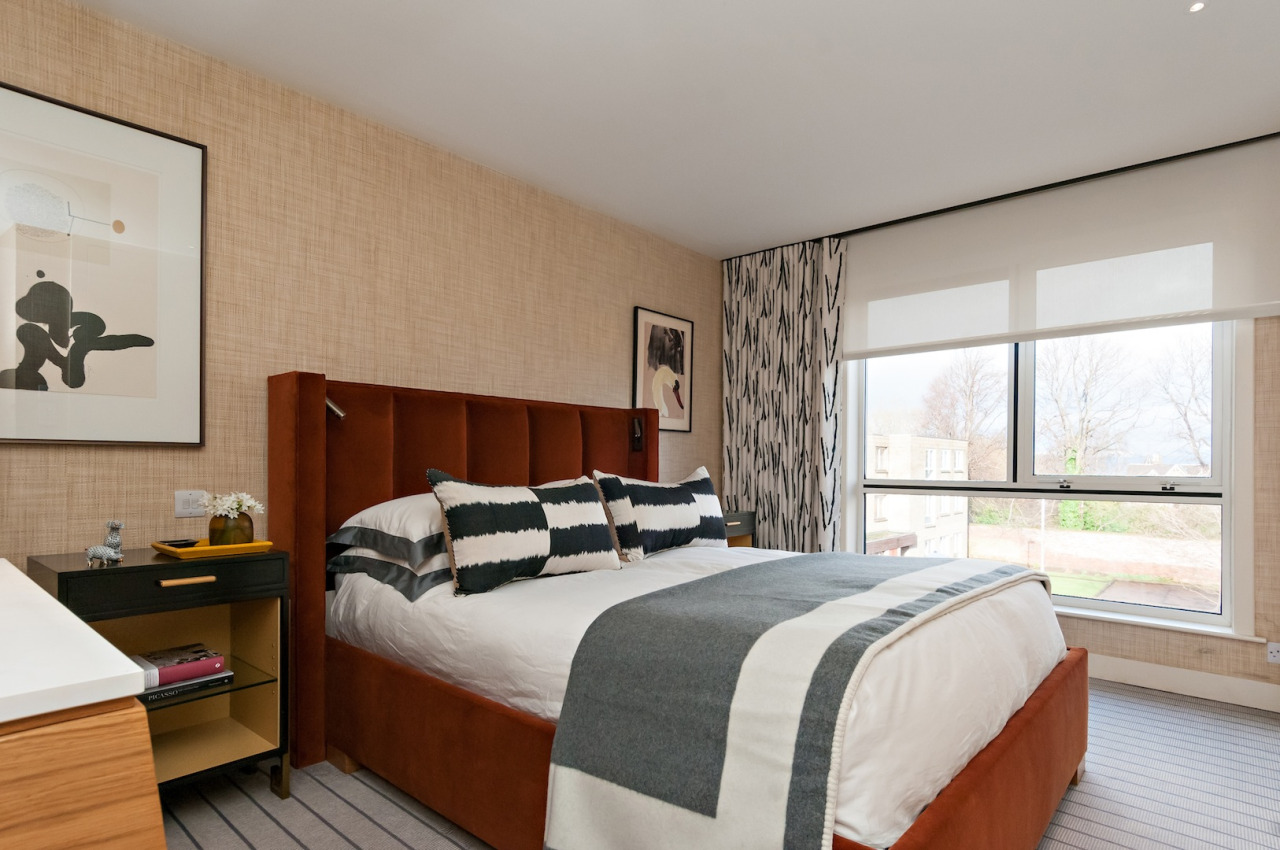 Is the bedroom furniture also bespoke?

Yes it is. The main bedroom has a rust velvet headboard as it always feels luxurious using velvet on a bed, and I used the same fabric as a deep border on the curtains in the guest bedroom – it’s a detail that comes from the late David Collins as I was a big fan of his work. The broadloom Wilton carpets for the bedrooms were also made bespoke.

You’ve mentioned the importance of artworks in your home – which artists have you featured here?

I have works by John Bellany, Alberto Morrocco, Brent Millar and Alan Davie – the larger of the two artworks in the kitchen is by Davie, as is the large piece in the third bedroom. There’s a set of prints by Le Corbusier in the dining area and in the main bedroom, and pieces by Matisse, Ben Nicholson and Victor Pasmore, and there are also screenprints by Shelagh Atkinson in the living area.

After seven years, what have been the highlights of living here?

I love getting up in the morning and walking through into the living space to find this incredible light streaming in. The layout was very well thought out when it was originally designed, with the living areas on one side, getting all the light, and the bedrooms on the other. It flows really well.

What will I miss? There are fantastic neighbours, and it takes me five minutes to get to work. If it wasn’t for the fact that I now have two cocker spaniels, Jack and Louis, who need a garden, I wouldn’t be moving. 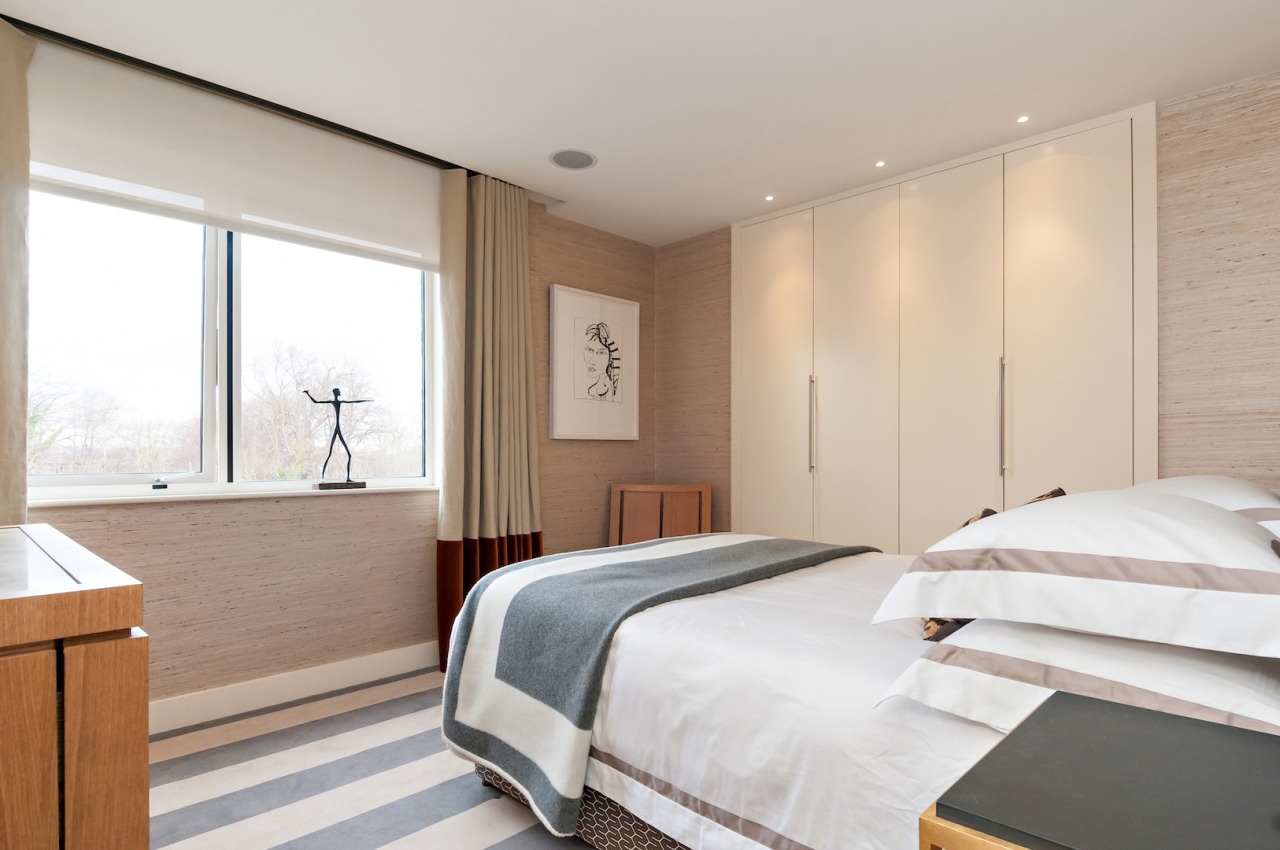